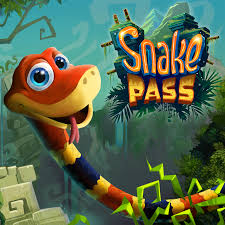 Produced for an annual Game Jam held by Sumo Digital, Snake Pass is a physics-based puzzle platformer created with love by one guy, Seb Liese. Gamers of all ages have shown excitement over this game and it’s a growing success across platforms. Evolving from a demo to a fully produced game, Snake Pass features perhaps the most adorable snake ever- Noodle!

Snake Pass is sure to teach you some perseverance and humility. For some people, the controls will be a breeze, but for others, coiling around a bamboo stick is going to take 30 minutes. One of the biggest things you have to remember when playing Snake Pass is to hold still and think before acting. Which, especially for people like me, is something we all have to remember to do sometimes. 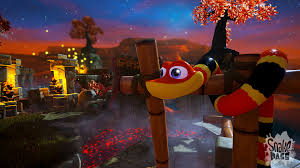 Inspired by his favorite games and his childhood pet snake, Seb Liese set out to create Snake Pass. It’s been called a throwback to great games of old and something truly inventive and fun to play. These players, however, I don’t know if they were playing on the PC. A vast majority of the reviews on Steam are overwhelmingly positive, but there’s definitely an preferred gaming method for this gem. Looking at Snake Pass itself as well as how it translates on the PC, this review will look at the learning curve, obvious love, and endless possibilities included.

Starting up Snake Pass, I first used the keyboard for controls. Twenty minutes later, I was driving to Target to get a USB cord to use my XBOX controller instead. You know how long ago I got my license? Literally a week ago. You know how much desperation it takes to get Sydney to leave the house in her pajamas to get a gaming accessory? A lot. DO NOT use a keyboard for this game. Unless you are magical, 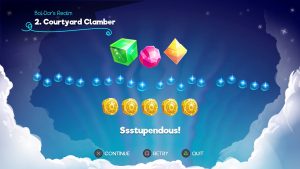 you will rocked. The Snake Pass site even recommends the use of a controller. Also, if your computer is basic like mine is, make sure to set the visual quality to “medium” or below, for the lag on the “very high” setting made the game practically unplayable. Snake Pass is surprisingly taxing on hardware.

Okay. So you got your controller ready,  your visuals set to a level where you aren’t dying of lag.  Finally, finally the game can begin. You will now discover that you are one of three people: the good, the bad, or the ugly. Maybe you’ll fall in love and get it immediately. You’re all set for (what for you will be) 5 hours of pure joy and challenge. Maybe you’ll be so flabbergasted and confused by how different this is that you’ll give up and have no idea what’s going on. Congratulations. For you, this game is only 30 minutes. And 20 of them were spent side-hugging a stick of bamboo. Finally, maybe you’ll fall in the middle. You’re a little perplexed by the artistry of playing as a snake, but you’re going to push through. You’re going to laugh at yourself a lot. Maybe yell at some point and scare your mom. But, for you, the game will be almost 8 hours because ya know what, why not. Snake Pass is a total learning curve and my curve took about 2 hours and loads of 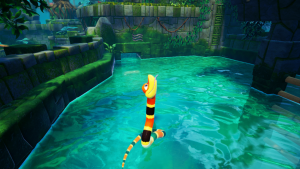 patience. The way that you play Snake Pass is different from perhaps most people are used to. You think fast, but act slow. The biggest advice from Liese—because I needed wisdom—is to just not press buttons. Look, direct, and then press. Because if you keep pressing and pressing like I like to, you’re going to fall into the ugly instead of just bad.

Still around? Great. Most people past this learning curve LOVE the game, and so did I. It’s colorful, fun, inventive, and full of love. Once you learn how to tilt your head and move the right way, you’ll discover there’s a button to adjust little Noodle’s expressions. And it’s adorable. Somehow Sumo Digital made a snake adorable, even if he’s highly venomous coral snake. There’s color and sparkle everywhere. You can tell this truly was a passion project by Liese. As you play, you’re absorbed in this lovely world that’s full of possibility and playability. The story is rather silly, but that isn’t what truly matters here. Liese was trying to emulate the simple childish games he grew up with, while keeping the challenge and inventiveness alive. I’m sure the game would be beautiful on a bigger screen, but it still makes for a happy scene on my little monitor.

The puzzles in Snake Pass are genuinely challenging, ranging from “Alright, this is okay,” to “Wait I’m supposed to do what?” There are 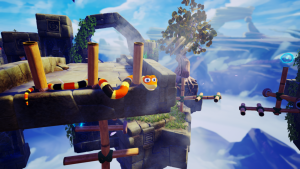 usually multiple ways to attack a challenge, so having to start back over at a checkpoint isn’t quite so draining. You’ll explore several different biomes as Noodle, from underwater bits to jungles. The change of pace and obstacles are refreshing and enjoyable. Snake Pass is the sort of game you play to feel accomplished, to feel happy, and to feel like you’re doing something worth your time. It’s the sort of thing that’s perfect for a family game night, playing with a group of friends, or a quirky date night—it is the sort of experience that’s best with other people. When, after hours of figuring out how to move and passing the remote back and forth, you can all gush over a level well done. Because failing to get across that bamboo bridge for the eighteenth time is much less fun than if you’re laughing at yourself with the people beside you.

All in all, Snake Pass is a game worth getting on the hype train about. It’s super fun and worth your time. However, I’d highly recommend you grab it on not the PC. Xbox, PS4, and Switch versions of this game automatically come with a controller set up. Besides that, all the camera motion will be much easier on the eyes when you’re 10 feet away. It’s easier to fit your new Snake Pass team around a 35″ screen instead of a 13″ one. But you should definitely make that team. If you like a puzzle-platformer, get the list going now, because you know what you should be doing with them this Friday night.