I thought there were only five Solas

SOLAS 128 is a synthwave-infused puzzle game about an ancient machine that has been corrupted by an outside force. To restore it, you must use mirrors to direct beams of light to receivers in order to re-establish the link between the machine and its power source. Let’s dive in and see how the game does. 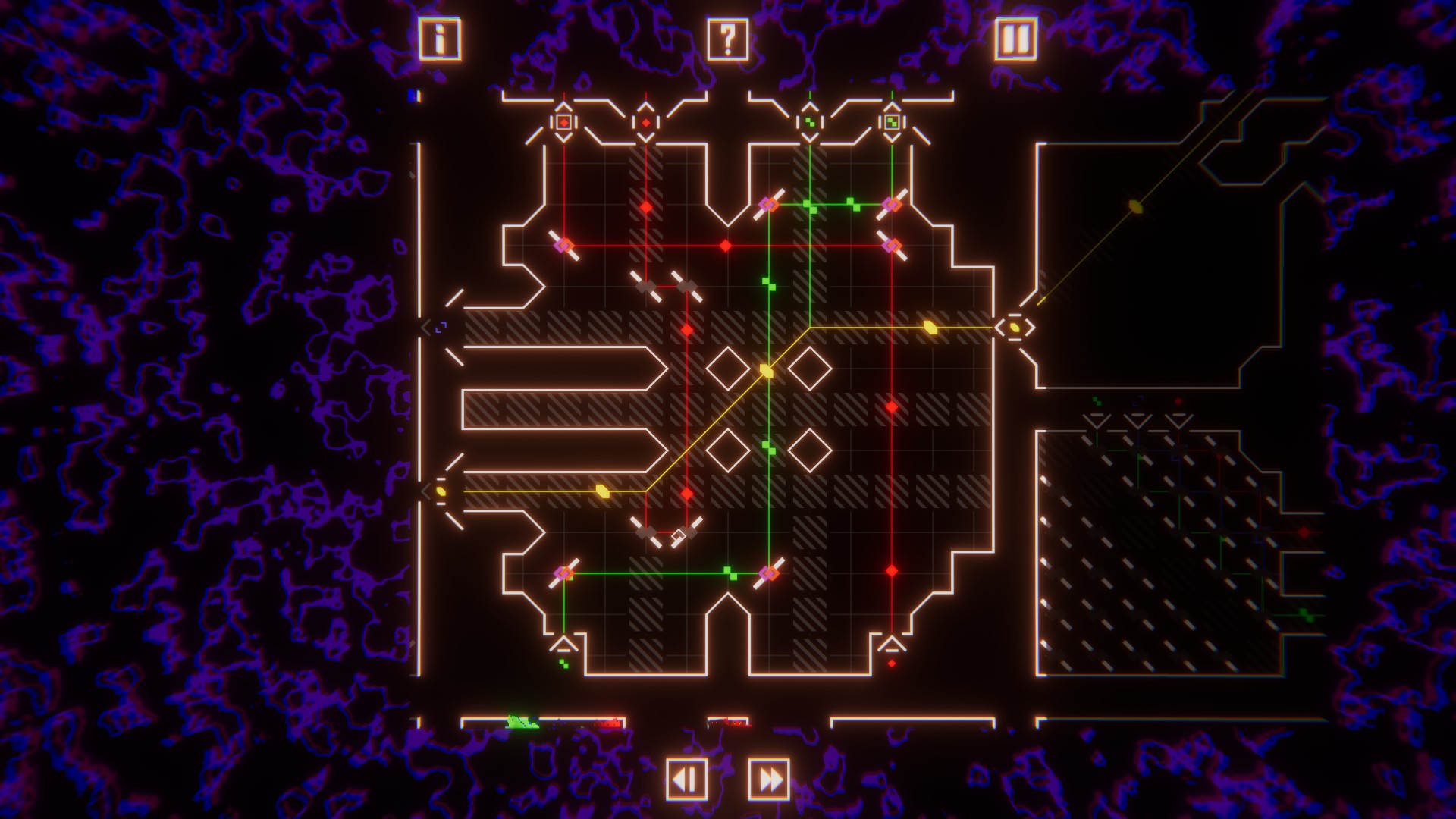 There are no instances of language, violence, sexual content, or alcohol and drugs. This is a very family-friendly game, and there is no content of which to be concerned.

This game is rated E for Everyone 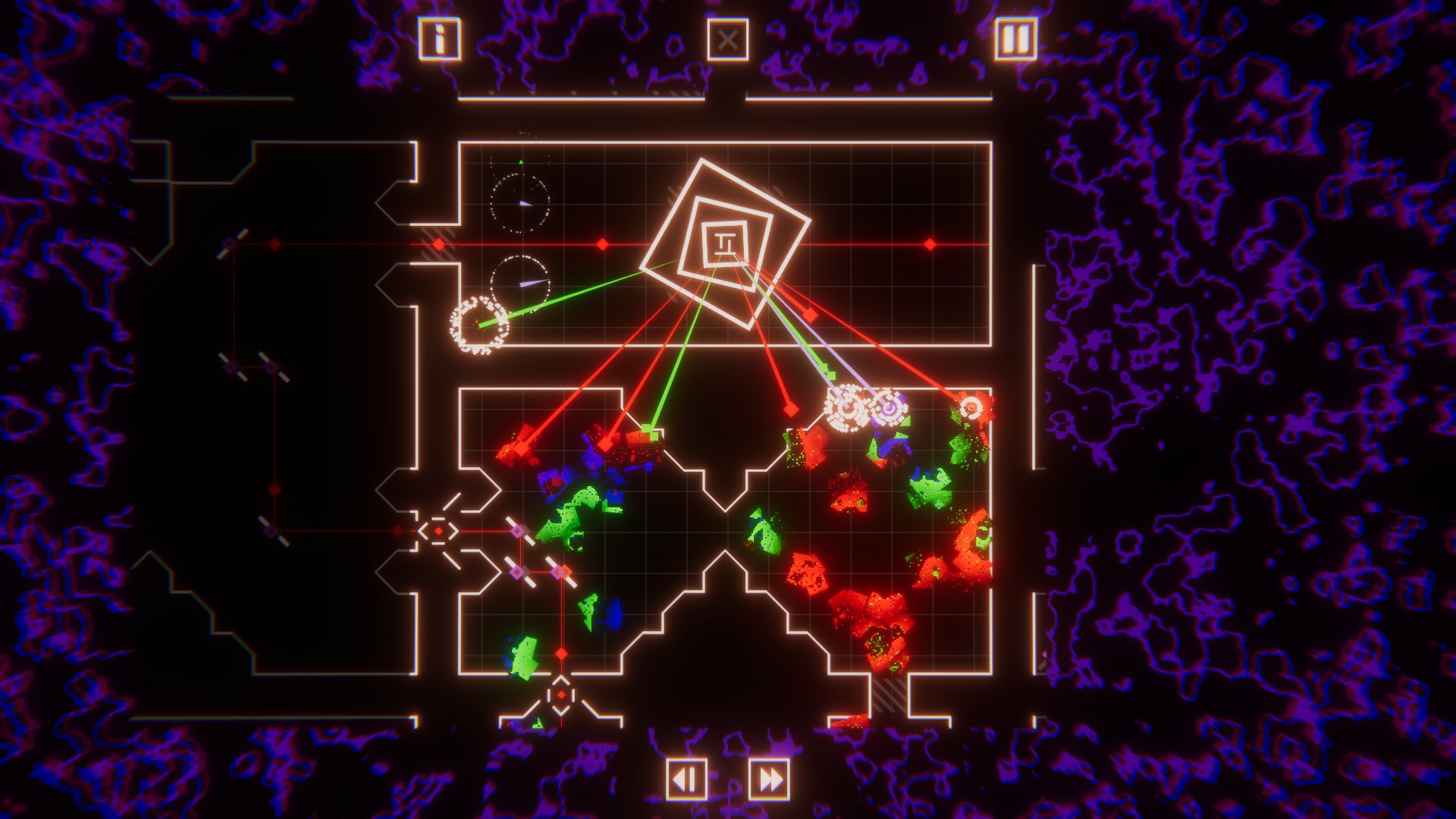 SOLAS 128 is charming from the start. At the beginning, the game takes you through a short prologue to help you get the hang of the mechanics. There is no dialogue in the game. Rather, it teaches you the mechanics through intuition.

The prologue is simple and exposes you to the mechanics of the gameplay, which mainly consists of moving the mirrors around. You can click on mirrors with orange centers to change their direction, while mirrors with purple centers are locked in position. You can still move them around, but they will only reflect one way. Additionally, there are mirrors that you can’t move, as well as mirrors that change when hit by a beam of light.

Soon after progressing into the meat of the game, the difficulty ramps up rather quickly. Thankfully, though, it is not a constant upward slope. When you come across a more difficult puzzle, there are typically one or two immediately afterward that are a bit easier. 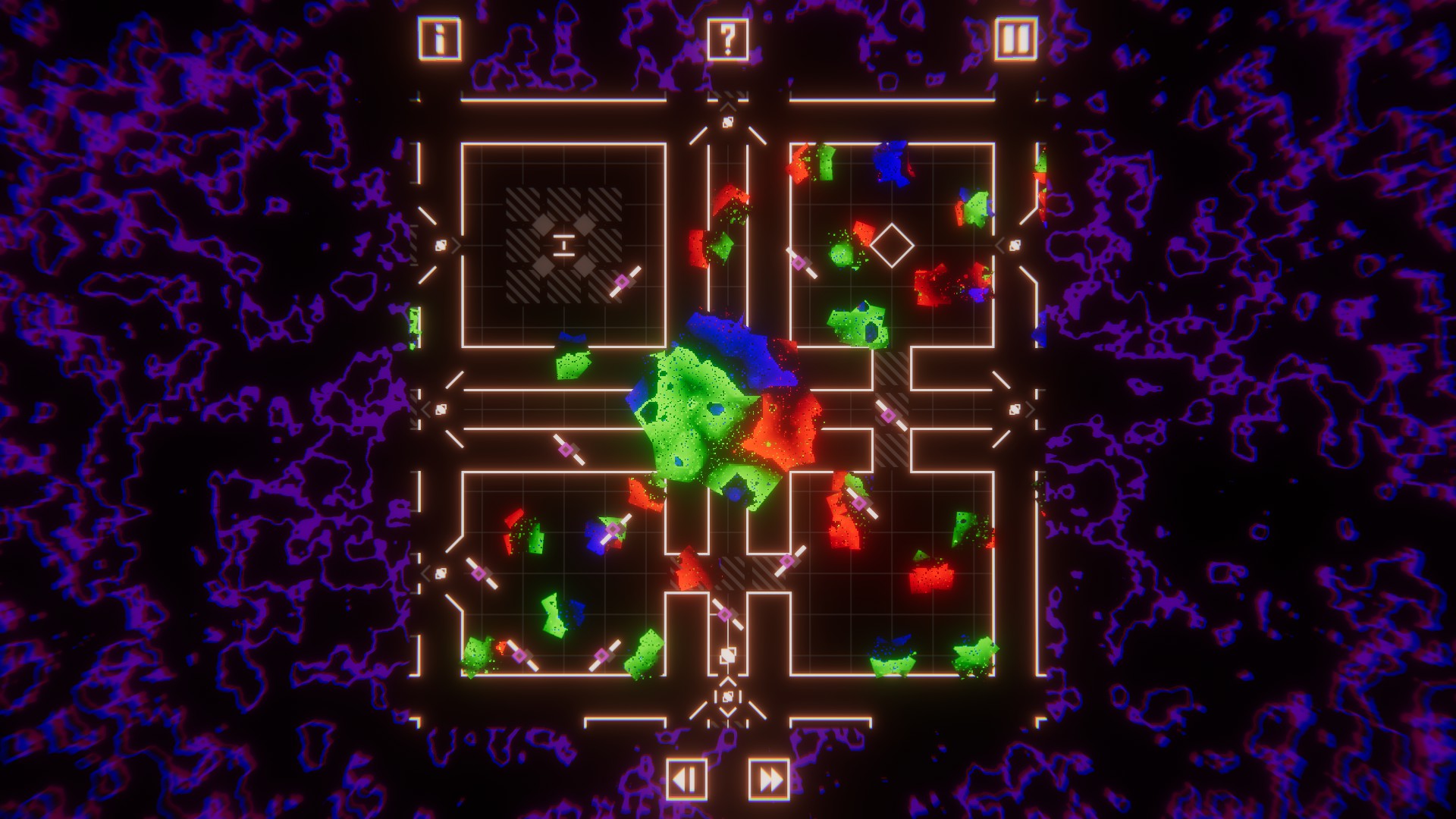 That is one terrifying alien invader

Each section connects to the previous one, and most connect to at least one more. The beam from each section carries over to the next, making it an enormous puzzle with many continuous streams. Considering the size of the map and how many sections there are, it is an impressive feat.

The light beams move according to the beat of the music. Alongside that, they also move along a grid, so the player is able to plan accordingly. Collisions with other beams may create new colors, as well as cause the new beam to go in a different direction, such as diagonal. There are times when causing a collision is necessary to progress, but usually it serves as another obstacle to overcome. Taking a step back and considering every possible angle at which to approach a puzzle becomes a vital method to progress to the next section.

Adding to the challenge are areas where the invading area has corruption. Those areas are indicated by a mashup of colors covering some amount of the grid. However much it covers changes with the area; sometimes it’s a small area, other times it’s a large chunk of the puzzle. The corruption blocks the light, so the more grids it covers, the more difficult the puzzle is.

In various sections, you will come across grids that have diagonal, white lines through them. Mirrors are not allowed to be placed on these areas, so where you can place your pieces becomes even more restricted. Such cases are more prevalent later in the game, but you get a taste of it in a few early levels. It is remarkable how much more challenging a puzzle becomes with something so simple as one unavailable grid. 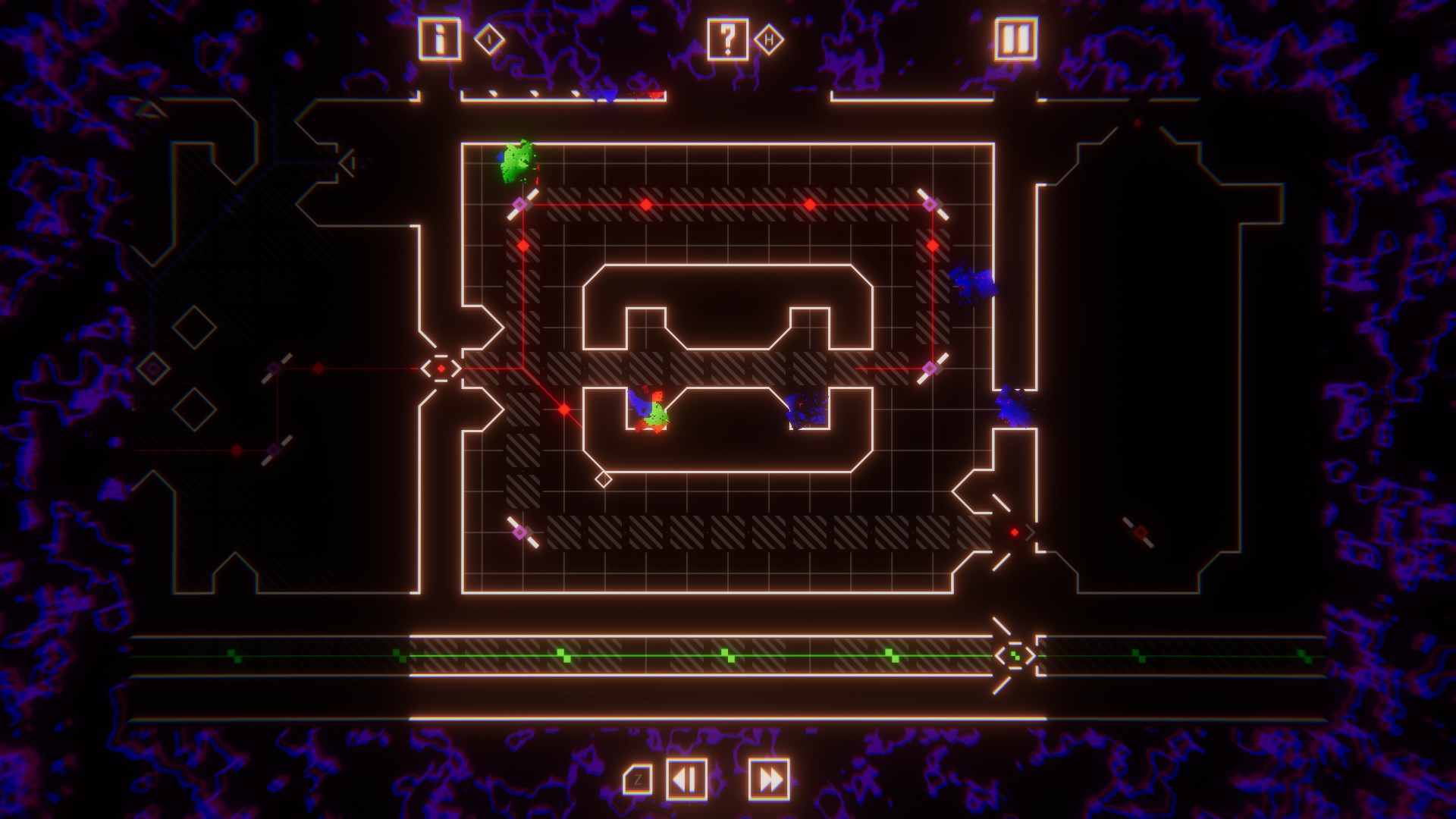 Some puzzles are deceptively complex

The visuals in the game are outstanding. The neon lights coupled with the synthwave soundtrack is brilliant. With the growing concern of accessibility in all kinds of games in recent times—there was, after all, a category for it in 2020’s Game Awards—it would seem that the game’s reliance on color would be a barrier. However, Amicable Animal took that into account, and designed SOLAS 128 to be colorblind-friendly. Each beam’s color is also represented by shapes, which can then be matched to the shapes in the receivers.

There is one visual effect that, though not vital to the game—you can even turn it off in the settings—adds a lot to the atmosphere. Occasionally, when you enter a new section, you encounter the invading entity. During those encounters, you watch as it corrupts that section’s grids. It moves around, and the entire section looks like it has a terrible glitch. When the invader moves on, it leaves behind corrupted grids.

There are no characters in the traditional sense. There is simply you, the ancient machine you are trying to restore, and the outside entity that is corrupting the machine. Therefore, the player can fill in the blanks and let the story tell itself through the visuals and music. Conversely, the player doesn’t need to look for the story at all, and instead just focus on solving the puzzles. I found it to be a rather creative way to tell a story.

In a risky but creative move, the main menu lacks any text telling you what’s what. Rather, the game lets you use your intuition to determine what function each button has based on the icon. There is minimal text in the settings to help you get the right combination, but aside from that, there is no text at all. Once or twice, I found myself accidentally starting a new game while exploring the menu and seeing what the icons meant. Once you’ve got a handle on it, though, it is pretty simple to navigate. 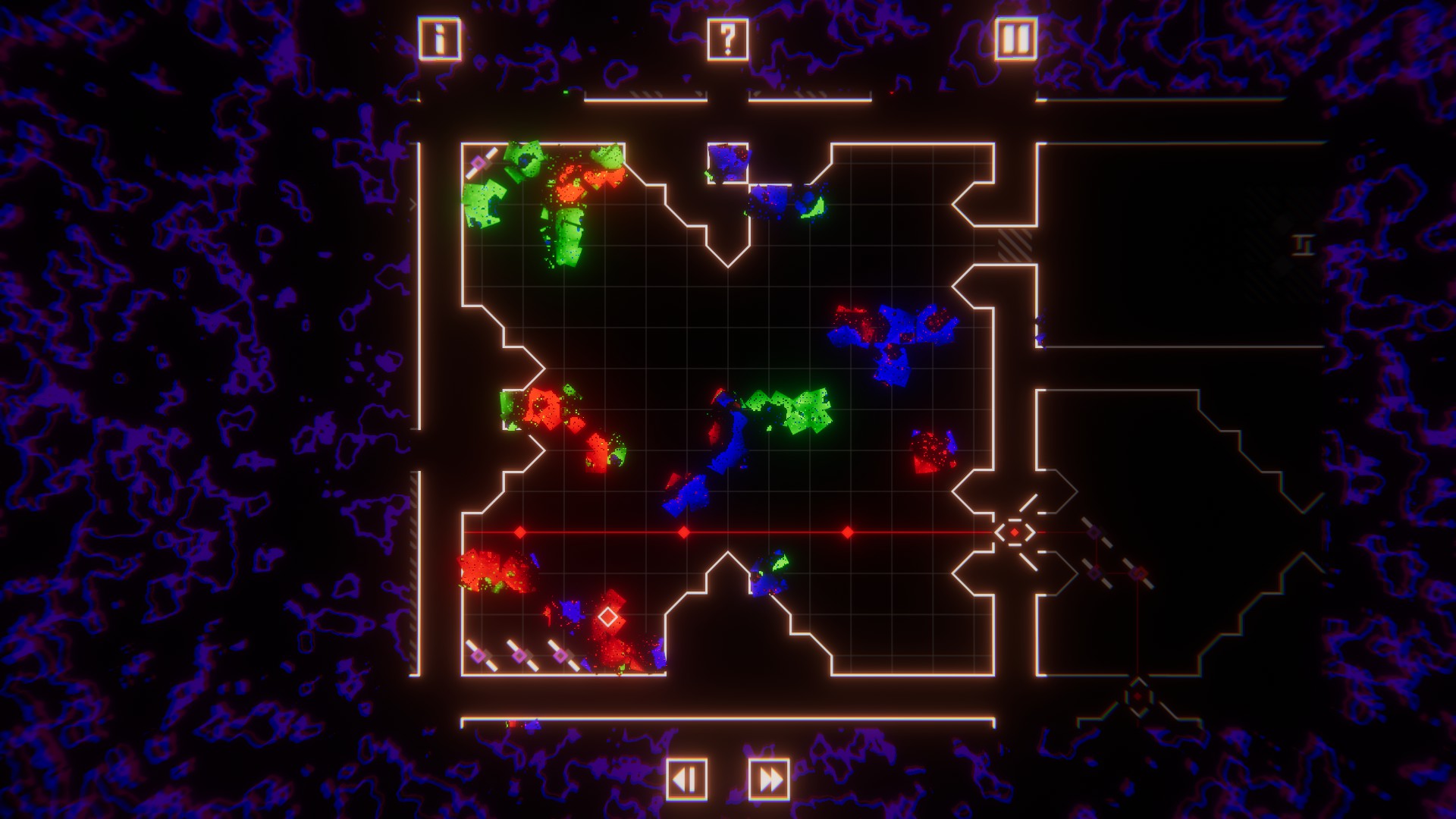 There is a hint system, which I found to be one of the game’s major flaws. The part of it that works well is that there is a cooldown time after using it, which encourages the player to keep going in that direction and solve the problem for themselves. Another positive point is that there are a limited number of hints per section, so it’s impossible to let the game solve the puzzle for you. Where the flaw comes in, however, is that the hints given are not necessarily in a spot that will actually help solve the puzzle. I have come across puzzles where the solution had nothing to do with where the hint indicated a mirror should be placed. As the game’s difficulty progresses, that flaw makes it all the more difficult.

The soundtrack as well is hit-or-miss for me. There isn’t anything inherently wrong with it; the beats bring the flow of light to life. It sets the game’s tone as well, and helps you immerse yourself in trying to solve the puzzle. However, each song repeats endlessly until you reach the next major shift in tone. As a result, the music can get monotonous after a while. Until it gets to that point, however, I really enjoy it. 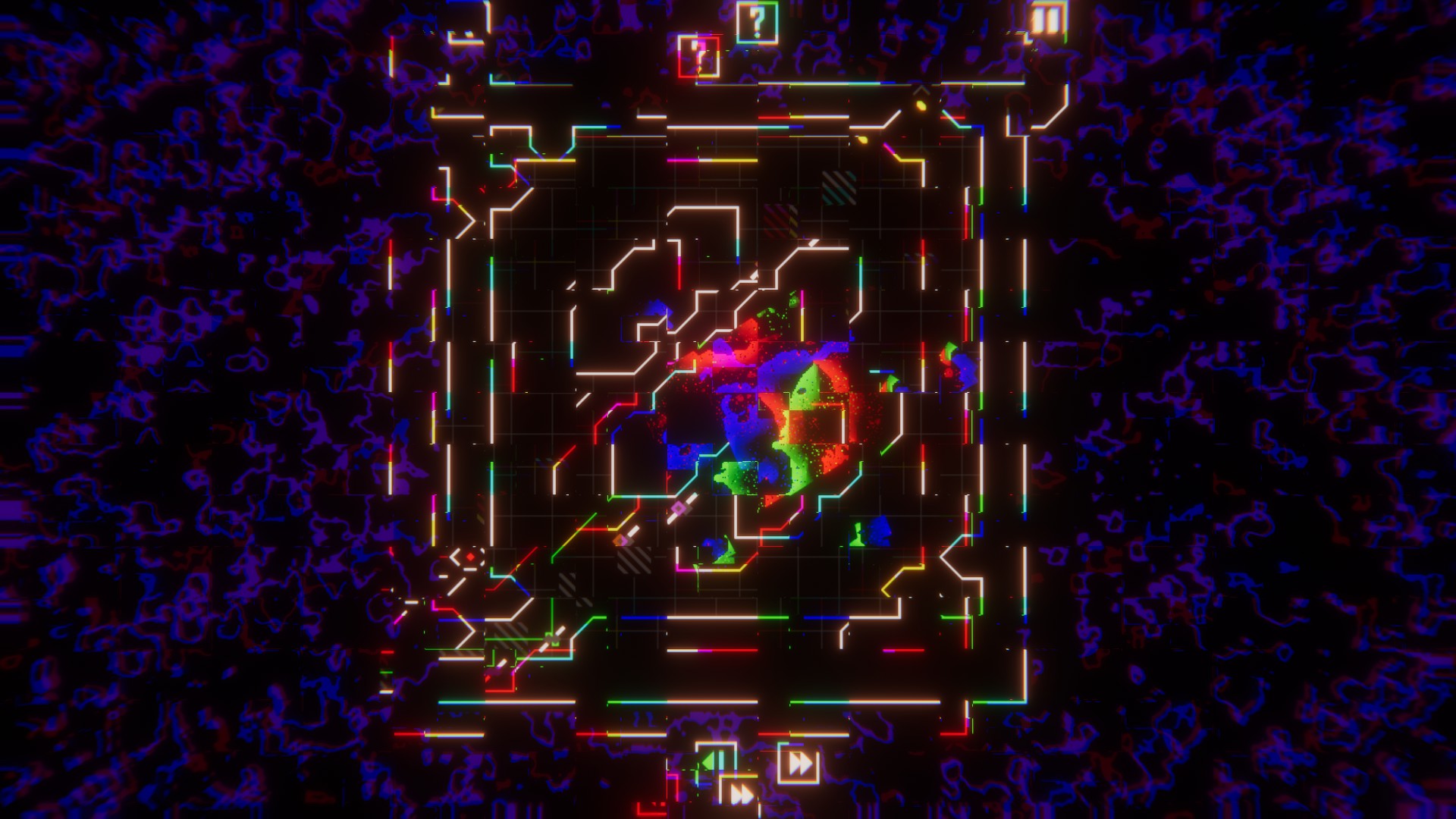 The glitch is one of my favorite things

Despite its flaws, SOLAS 128 is a fun and challenging game. Fans of puzzle games would do well to check it out. It’s safe to say it has earned a spot as one of the best puzzle games I’ve played in recent memory.