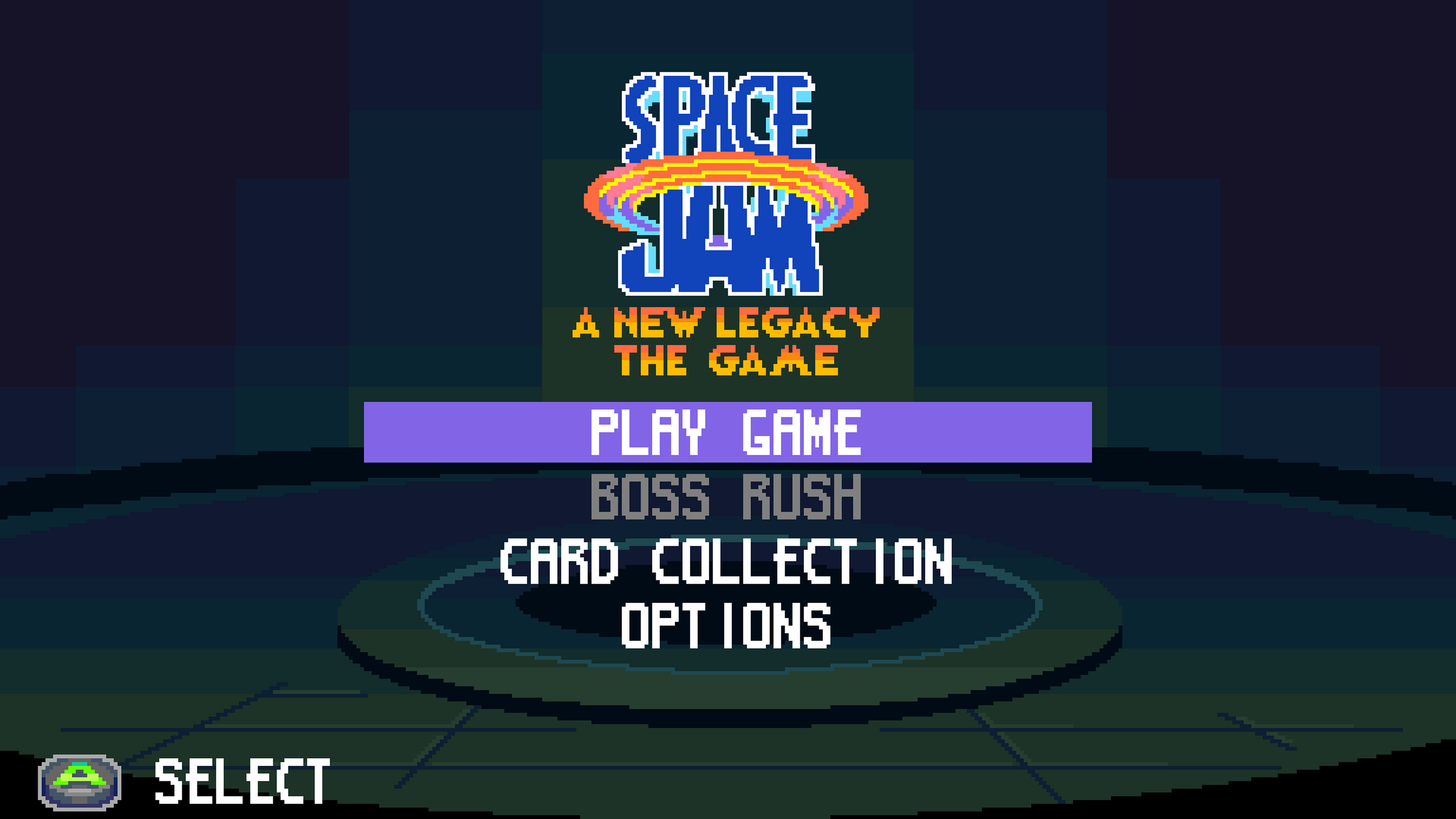 The start of a new legacy!

What came about as a fan contest to create a unique Space Jam game to coincide with the recent release of the new movie, transformed into Space Jam-A New Legacy: The Game. Xbox and developer Digital Eclipse decided on two lucky winners whose ideas and concepts would go into this new game which launched exclusively to Game Pass Ultimate members on July 1st, 2021. On July 15th, the game was made available for all Xbox players to download at no cost. But is the game a slam dunk or a technical foul? Read on to find out!

Sexuality: Some could argue Lola is sexualized but its less so than in the original movie/games

Violence: There is cartoon violence aplenty but it’s mostly against robots and monsters who used to be Pro Basketball players. There is no blood or gore or anything of that nature.

Right off the bat, A New Legacy boasts beautiful pixelated sprites and a lot of color. The familiar teal, orange, and purple color scheme is on full display in most of the environments and there is decent enemy variety. The three protagonists, Bug Bunny, Lola Bunny, and Lebron James are on a mission to stop Al G Rhythm, a rogue AI that is bent on becoming all powerful.  He dispatches his Goon Squad to take out our heroes while he taunts them from his lair somewhere in cyberspace. To stop him, players need to find the 3 pieces of the Legacy Code hidden throughout the levels in order to unlock access to Al G and defeat him. 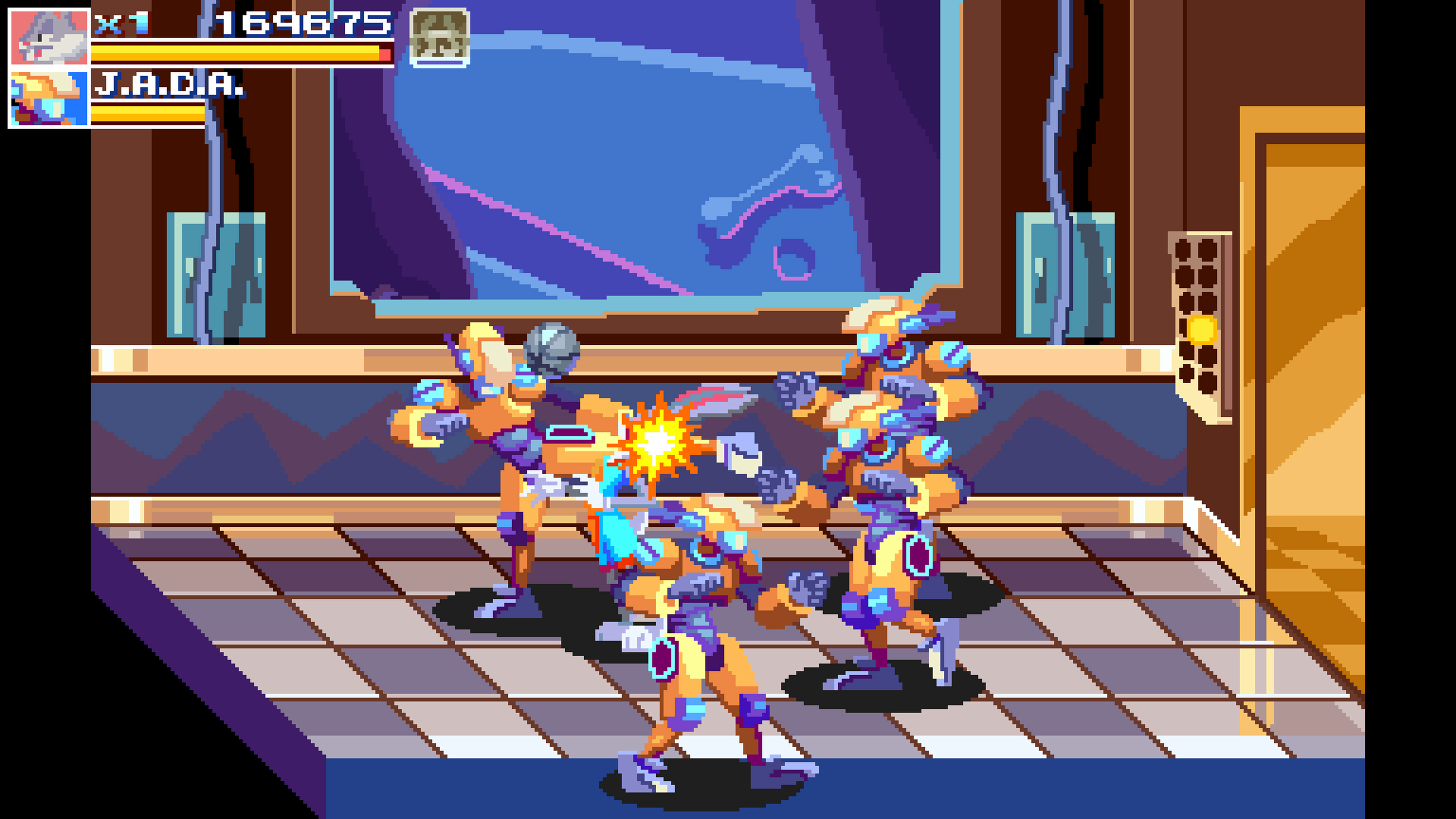 If you don’t have an elevator level is it really a beat em up?

The music, sound, and core gameplay are all solid but a few small things hold this game back from greatness. While I can’t really fault the game too much seeing as its essentially a fan made freebie, there is a lot that holds it back from being on the same level as Streets of Rage 4 or other popular Beat Em Ups. For starters, while there is couch co-op, there is disappointingly no online play. Up to three players can duke it out with the Goon Squad and Al G’s cronies locally on Xbox One, Series S, or Series X. Another qualm I have with the game is that there is no save progress to speak of. Players can make it as far as the end of the game, and finish it but if they wanted to just play the final level again they’d have to start all over at the beginning and work their way back to that part of the game. While this may not be a huge deal to some, as the game is super short, my biggest gaming pet peave is being forced to repeat content I’ve already finished. Unlike similar games, there are no hidden characters to unlock here which leaves little incentive to replay all the levels. 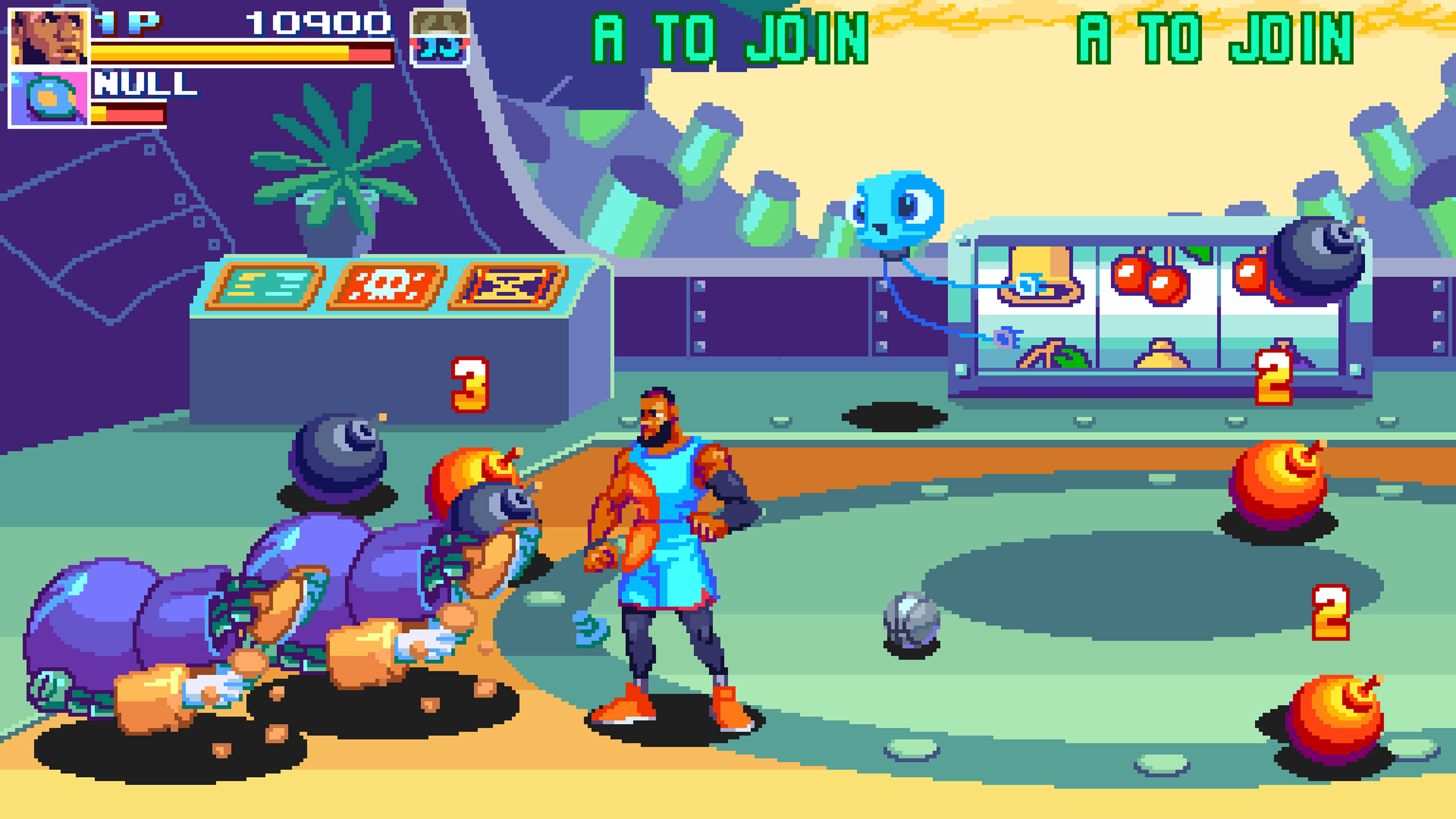 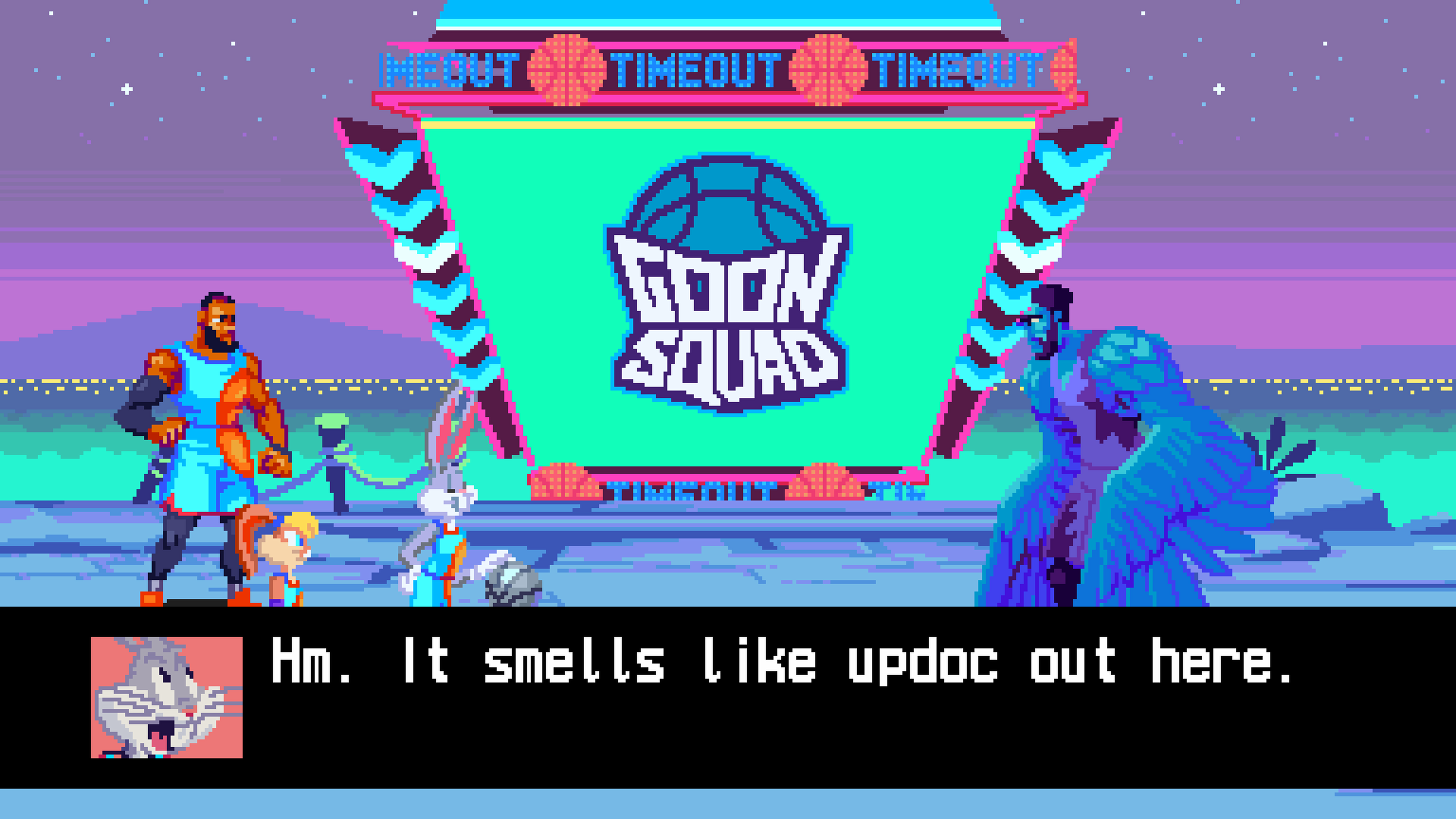 Bugs dropping one of the best joke set-ups of all time!

That being said, there are a few things I really like about A New Legacy! This is perhaps the first time I have seen a collectible card system in a beat em up. Here cards can be collected that summon other members of the Tune Squad, like Tweety Bird and Granny to heal players, or Roadrunner to provide a speed boost. Gameplay itself is familiar but competent and there are a few combos and different special abilities exclusive to each character, much like the ultimate attacks in Streets of Rage. Whether playing as Lola, Bugs, or Lebron himself players will have a basketball with them at all times and this can be used to ricochet off walls and hit approaching enemies, charged to break the containers for Legacy Codes and other items. They also act as a non-lethal but still useful way to stun enemies and leave them vulnerable to a combo.

Overall, Space Jam-A New Legacy: The Game is an ode to the beat em up genre and does a few things well to bring it into the modern era. From a collectible card system that buffs the player in numerous ways to the constant weapon/tool of a basketball that is used in and out of combat, the game finds ways to surprise and delight players. While perhaps a bit strange that this is a beat em up instead of an NBA Jam style dunk fest what it does, it does well. The movie this is based on may not be getting such great reviews but the game itself is a great way to kill time with family and friends over a weekend.

Space Jam-A New Legacy: The Game won't win any awards for innovation despite some of the cool gameplay elements it offers, but it will provide a couple of hours of fun with friends and family thanks to a whacky romp through a cartoon world with couch co-op and fun gameplay.