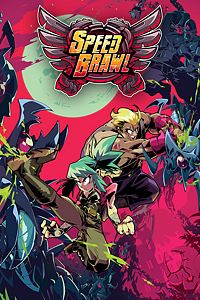 In a game genre like the beat ’em up, innovation might seem hard to come by. With such a simple formula, what can you possibly add? Speed Brawl attempts to do this not by reinventing the formula, but refocusing it. With a huge emphasis on speed, it still maintains the elegant simplicity of the beat em up genre with only a few RPG-lite mechanics added on for variety.

Keeping its simplicity proved a complication to me as a reviewer; how could I delve deep enough to fill out a review of sufficient detail? A point of praise is that I was often too entertained by Speed Brawl to find myself at all worried about it. Eventually I was able to find the depth hiding behind its simplicity, but the short version of this review could simply be: Speed Brawl is simple high energy fun. If you like the idea of running fast and beating up a lot of bugs, this could easily be the game for you.

Violence: Players fight against both human and bug-like enemies who make noises of pain upon defeat. Several of the main characters are frequently excited by the prospect of fighting. Defeated enemies disappear and no blood or significant injuries appear during fights. If a character is defeated their portrait shows them with bruises and bleeding cuts. Should the player lose the level a short scene will play showing these character’s injuries.

Language/Crude Humor: Few swears that would be familiar with speakers of American English show up, but characters use some crude British slang and swears in other languages. An early enemy character often makes crude advances on female characters. Said female characters repeatedly rebuff him with threats of violence.

Sexual Content: Female characters’ outfits are not particularly revealing but do show their figures to some degree. One character’s description says they are a “lover of both men and women”.

Other Negative Themes: Owners of the leagues the player competes in cheat and unfairly rig the competition. The protagonists compare one league owner to the devil; he explicitly chooses to take this as a compliment.

Positive Themes: Teamwork and honor are both admirable qualities that are promoted by the main characters. All the female protagonists of the game are their own independent characters. While body positivity is hardly a major theme, it is refreshing to see all three playable female characters having distinctly different body types, from stout and muscular to slight and waifish, and none of them being depicted as ugly or unfeminine.

The first thing that hits you about Speed Brawl is its visual design. The cartoonish anime style is reminiscent of games such as Skullgirls, and it fits the tone the game sets perfectly. Character models have enough realism to them to be relatable as characters. At the same time, the game uses their cartoonish nature to great humorous effect. Losing a level can result in a cutscene depicting the characters in seriously beat up states; if it was more realistic it would be quite disconcerting, but with the exaggerated way it’s depicted it still feels lighthearted without losing the rough-and-tumble feel of the world overall. 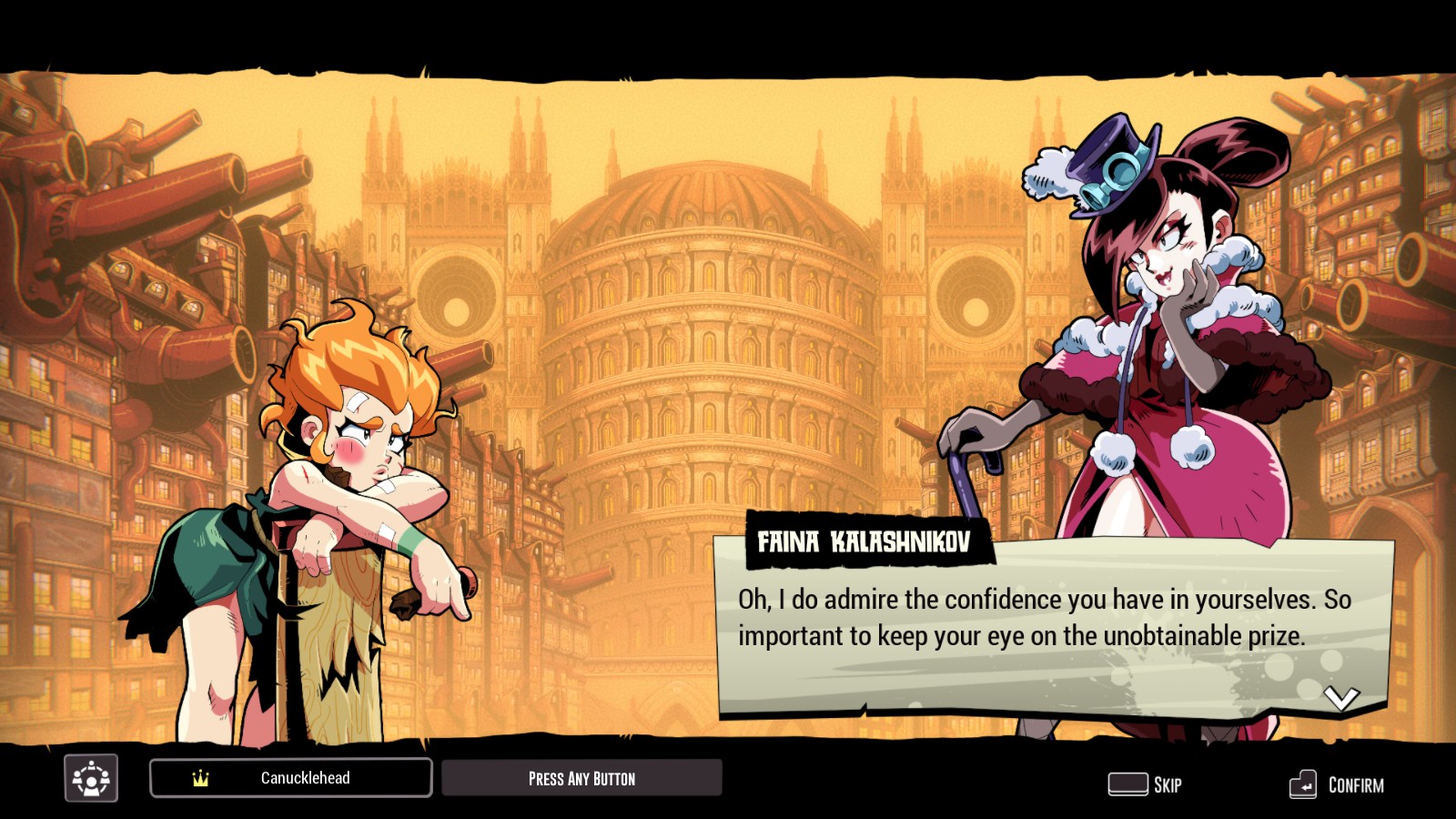 Speaking of the world, it’s also a big drawing factor. The game takes place in an alternate version of Victorian London; fans of the steampunk and clockpunk genres will feel quite at home. The divergence in technology is justified as the result of an alien invasion. The details mostly appear during loading screens, a trope that’s common to many games now but I nevertheless love. It lets those interested in the worldbuilding aspects of the game have their little nuggets of information without thrusting them awkwardly into the narrative and slowing down the game itself. 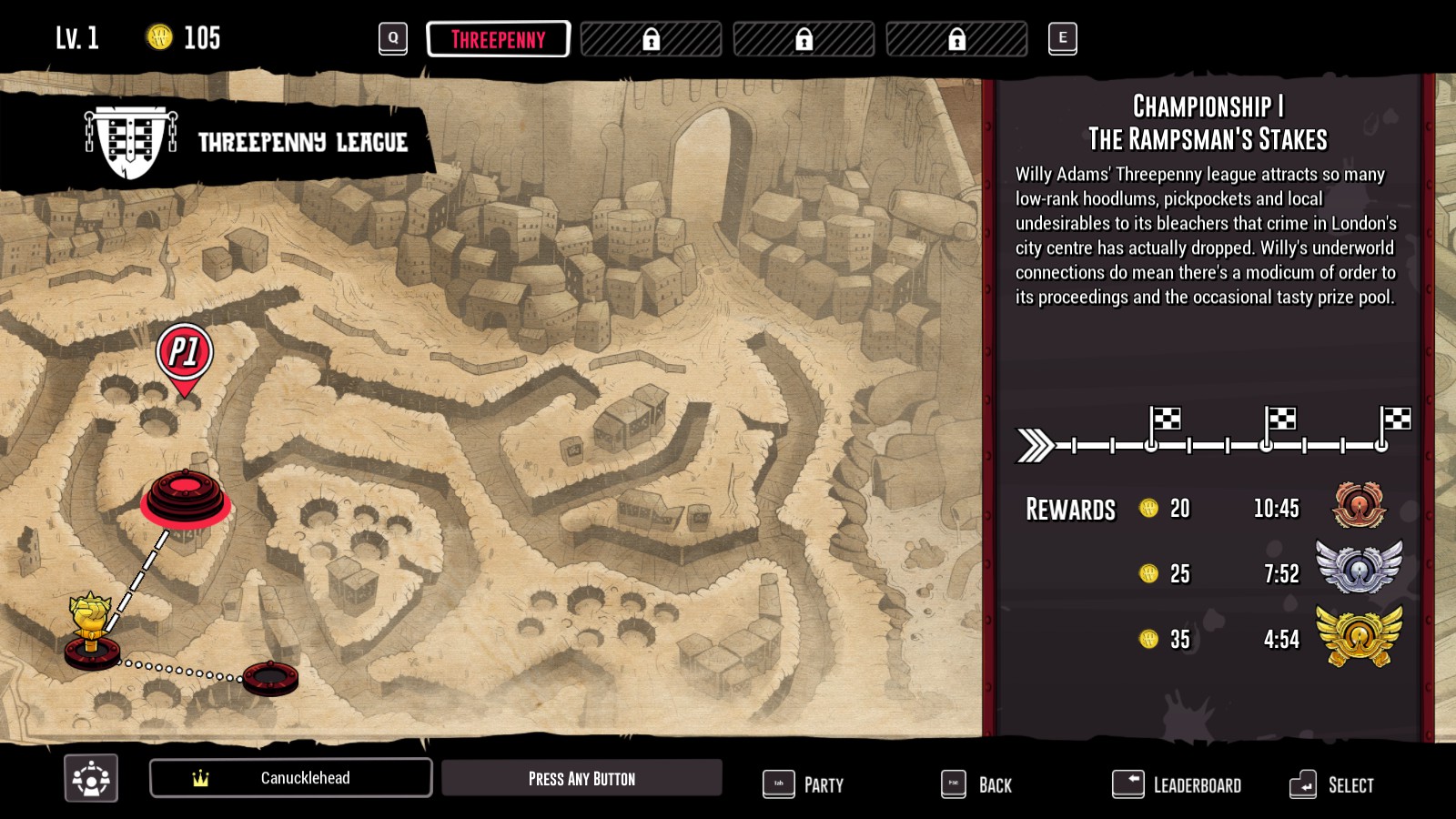 Each level has an amusing little description added on, suffusing every moment of Speed Brawl with the same tone.

This is a good thing, because Speed Brawl, unsurprisingly, is all about speed and forward momentum. The titular contests are a mixture of racing and beat ’em up gameplay. Fighting against the clock, the player must dash from one battlefield to the next, clearing them as fast as possible until they reach the finish line. What prevents this from being a gimmick of shoving two different types of games together is the use of momentum in the battles themselves. The faster a character is running during a fight, the more powerful their attacks will be. This simple mechanic forms the core of Speed Brawl, forcing you to frantically dash across the screen with every fight.

Speed Brawl supplements its gameplay with a few light RPG elements. As you complete levels you earn both money to purchase new gear as well as fans, which function as experience points and can allow you to progress the character’s abilities. Equipment is simple, falling into three categories: gloves boost attack, boots raise defense, and accessories give more unique bonuses. Damage in this game is divided into five elements, with your equipment dealing or resisting damage from one of them. Each character generally equips items that focus on one of two elements. This allows for some overlap in who can best handle what kinds of enemies, while still giving each character a distinct identity. 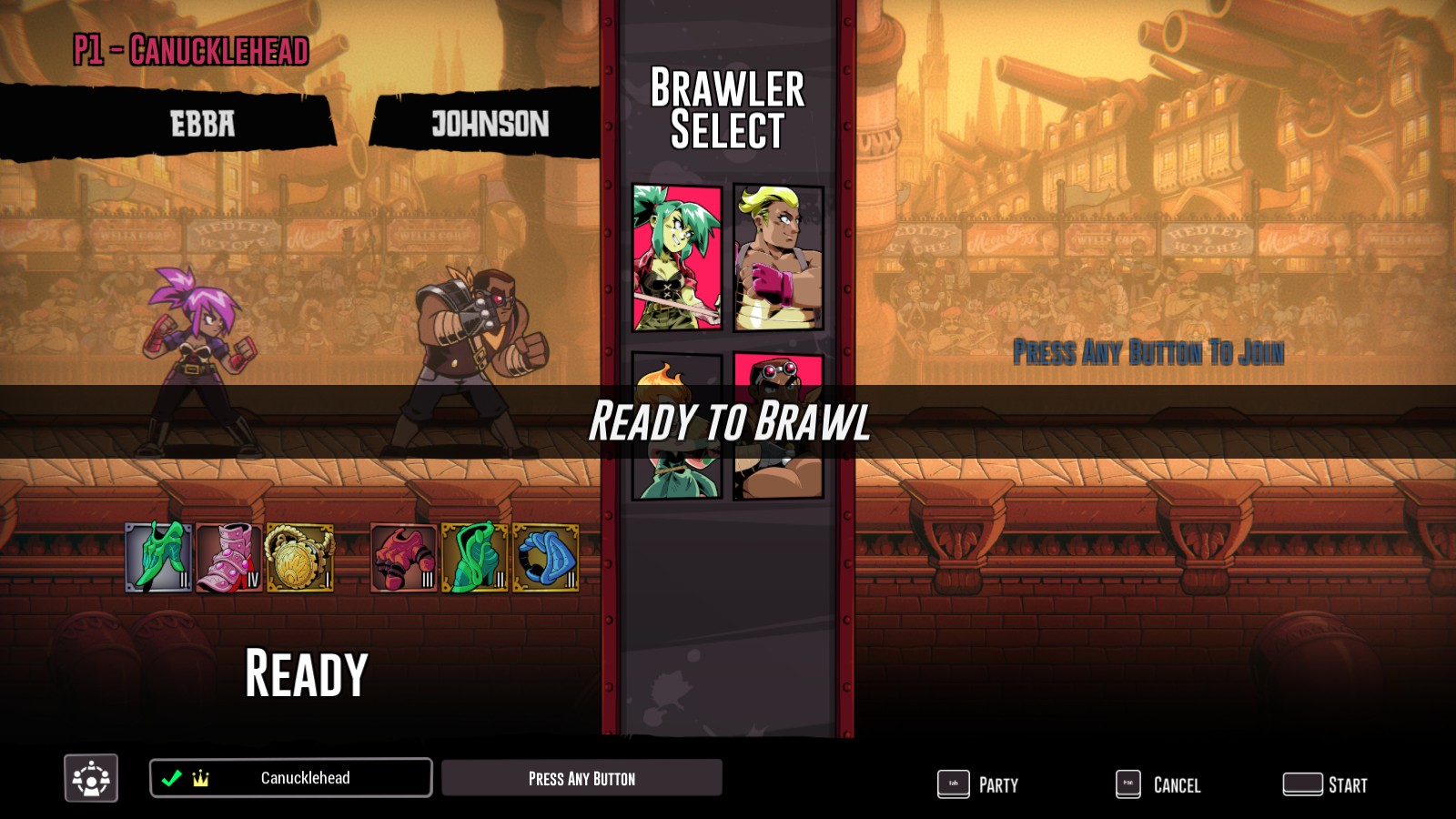 You’ll have access to many different characters, each with their own look and feel.

It’s in the skill trees that each character’s uniqueness truly shines, however. Everyone has three different categories they can put skill points into: attack, defense, and technique. Every character has their own unique special attack and super move they can improve by investing points in the attack skill path. Further differentiation between characters can be found in the defense and technique skill trees. For instance, Ebba’s defense and technique skills focus on recovering health and energy used for special attacks respectively. This is different from another character, Bia, who’s defense revolves around dodging and technique creates a “sweet spot” where her attacks deal more damage. In this way, every character has a distinct style of play beyond simply dealing a particular type of damage; after some trial and error, players will quickly find one or two characters that suit their own style. 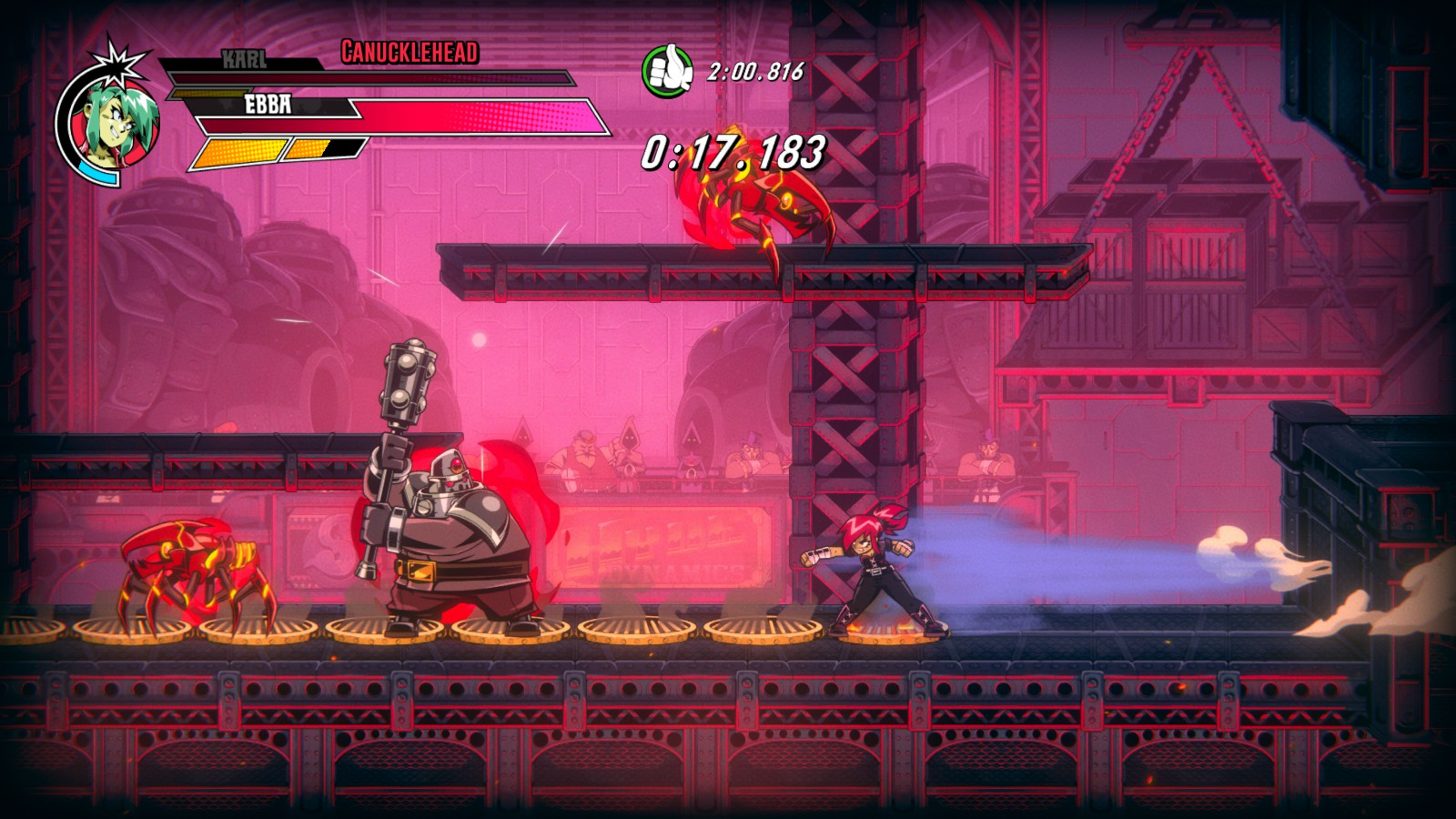 The more visible speed lines you see, the faster you’re going—and the more damage you’ll do.

Enemies fall into quickly recognizable patterns. You have smaller human enemies with spears and grenades, large ones with maces, and a plethora of bug-like aliens, among others. Each comes in various elemental varieties. This may sound like a recipe for a boring army of recolored enemies, but Speed Brawl uses subtle variations within this system to give each enemy a flavor of their own. Poison enemies may leave clouds of gas behind, while fire ones set the ground ablaze for a short period of time, for instance. The only potential misstep of this game may come from some enemies which can only be attacked from certain angles; it can be annoying to lose momentum because the enemy you’re approaching can only be attacked from above, for instance. 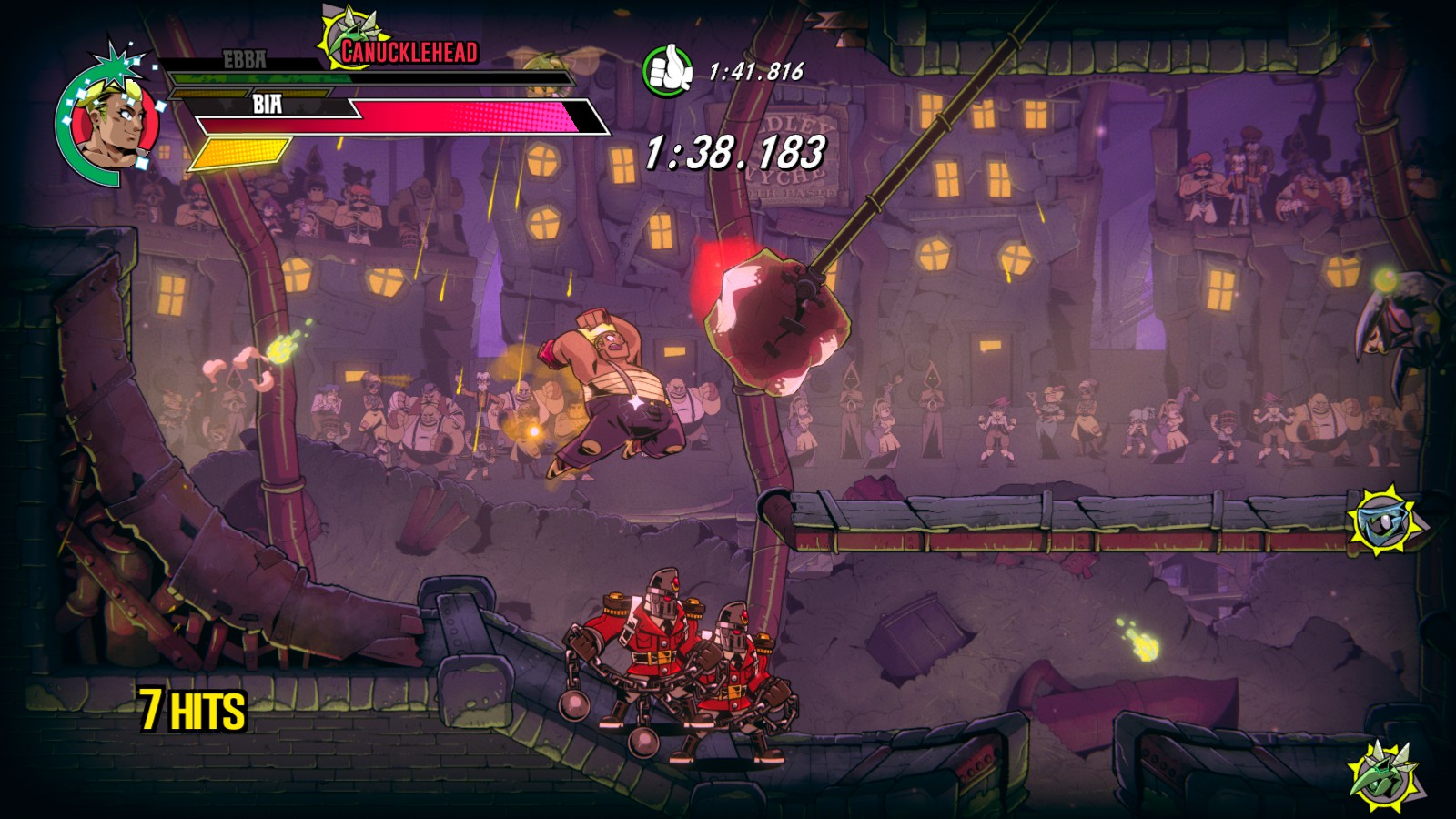 Making use of your environment—like that big heavy pendulum—can make clearing out enemies a lot easier.

With only a slight issue in enemy design however, Speed Brawl is a challenging and exciting game. Its high energy will keep many a player coming back time and time again, trying to get a better time on that speed challenge or beat a side mission that they simply couldn’t before. Whatever the case may be, Speed Brawl is certainly going to be a fun adventure for anyone who wants some fast-paced action.

Speed Brawl is an exciting dash from one challenge to the next. Simple enough to be picked up easily and challenging enough to keep you engaged, it's just plain fun that will keep you coming back for more.