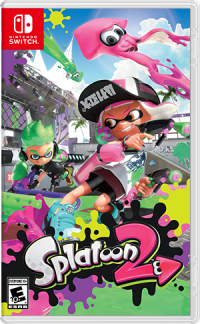 In 2015, the Splatoon franchise inked its way into the hearts of Wii U owners around the globe. Unfortunately the Wii U only sold 13.5 million units, which isn’t very many considering how populated our planet really is. Those who got their hands on a Wii U have really enjoyed the console—myself included. The first Splatoon was one of those great titles on the console that is beloved while a large number of people have not yet had the chance to experience it.

Now that Splatoon 2 is on the Switch, Nintendo takes a second shot at introducing these inklings to the world. Though these systems are hard to find, 4.7  million units have somehow been sold in the last three months—already nearing half of Wii U sales. It sounds like more people are going to experience this franchise that is still very new and fresh.

Nintendo prides themselves in being a platform for the whole family, they continue that model with Splatoon 2‘s ESRB rating of E 10+. In Splatoon 2, players will be facing off against other in online multiplayer battles, team up and splatting enemy Salmon in Salmon Run, or battling enemies in single-player mode.

Players must outfit their inklings with various weapons such Splat Dualies, Splat-zookas, splat rifles, giant paintbrushes/rollers, and much more. The premise of the multiplayer mode is not to kill the opposing team like many other shooters; the main mode of gameplay is called Turf War in which you must have the post paint on the ground across the map to win. However, you can “splat” your enemies which is not considered “killing.” In other modes, players will have to splat opposing enemy creatures and bosses.

Lastly, due to Nintendo’s online infrastructure parents do not need to worry about voice chat in-game. While the first Splatoon didn’t have voice chat at all, it is now done through a Nintendo Switch online app for mobile devices. Unless your child owns a mobile device, monitoring your child’s online interactions is not an issue with Splatoon 2. 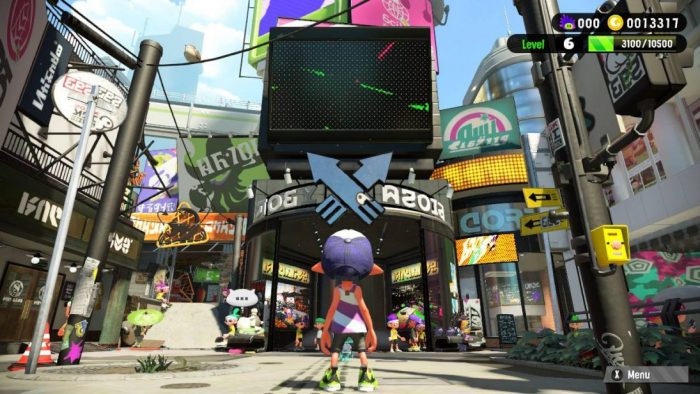 Splatoon 2 has been given a fresh coat of paint on Switch, an overall improvement since the franchise’s last gen debut. This is especially noticeable on the paint/ink that covers the ground during battle, as it now has a nice shine and texture to it rather than looking completely flat like it did on the Wii U. Even as I walked through Inkopolis Square, improved lighting and shadows really brought this toon-like world to life. I noticed these improvements have been implemented across the board in all gameplay modes, but it was single player where the visual presentation was really a treat to look at.

Before I get in the details of the multiplayer modes, I want to bring attention to the single player campaign which players will likely spend the least amount of time. Nintendo has a way of playing with mechanics and physics that other developers don’t. (I’ve learned this after recently catching up on a few Super Mario games.) In one stage I could grapple up to a higher ledge like Batman, in a another stage, fire a mounted Ink canon at some enemies, and in the next, be grinding rails while firing at enemies as if I was playing Infamous or Sunset Overdrive.

The main objective of the campaign is to investigate the disappearances of Callie and the great Zap Fish. Marie believes the two incidents are connected and recruits the player character as a new agent. After being recruited by Marie and becoming Agent 4 of the Squidbeak Splatoon, I traveled through stages that carried different themes and tones. The night stages are my personal favorites. Sheldon, who runs the Ammo Knights shop even lends a hand by having the player test out “Hero” versions of each weapon which can later be used in multiplayer. 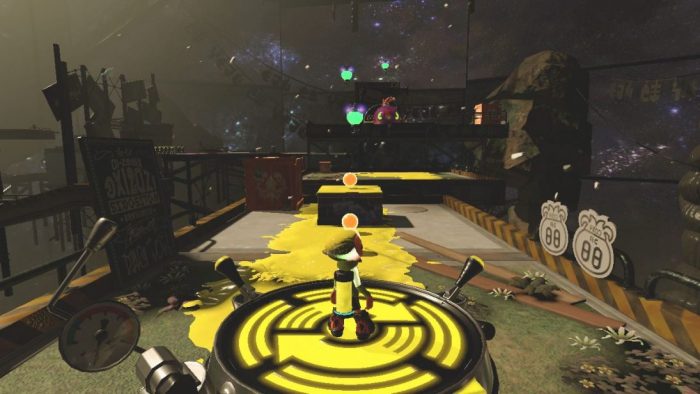 The various stage themes greatly change the atmosphere of a familiar singleplayer mode.

The greatest addition to the franchise is Salmon Run, Splatoon 2‘s version of wave-based co-op combat or “Horde Mode” as it’s commonly labeled. The premise is that a company called Grizzco is recruiting Inklings to prevent salmonids from invading and collect their golden eggs in the process. In each map there are four different weapons that players will take turns using as they complete waves. There is also a variety of elite boss enemies that each require special strategies to subdue them.

At first I was worried that Salmon Run was too easy, but when I ranked up from “Apprentice” to “Part-Timer,” I discovered that the difficulty increases along with the player’s rank. Bonuses can be earned as more time is spent in Salmon Run as well, unique apparel being the biggest incentive. Salmon Run is easily the most fun I’ve had with Splatoon 2, which is really a shame since the mode is locked into a schedule and cannot only played unless the area is open for business or players team up locally. 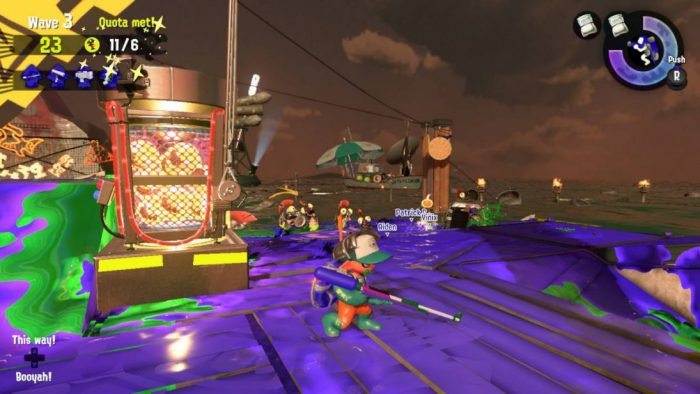 Be aware of the egg capsules location at all times,

Multiplayer is largely handled the same as it was in the first game with a few minor changes. The new hosts Pearl and Marina announce the map rotation for each mode every time the game is started up rather than every single time the rotation changes. The regular and ranked modes are back again; Turf War stays in the standard mode while ranked includes all of the modes from the original Splatoon. A new mode called “League Battle” is an addition that obviously caters to the eSports crowd and encourages players to team up and earn points across varied time periods. 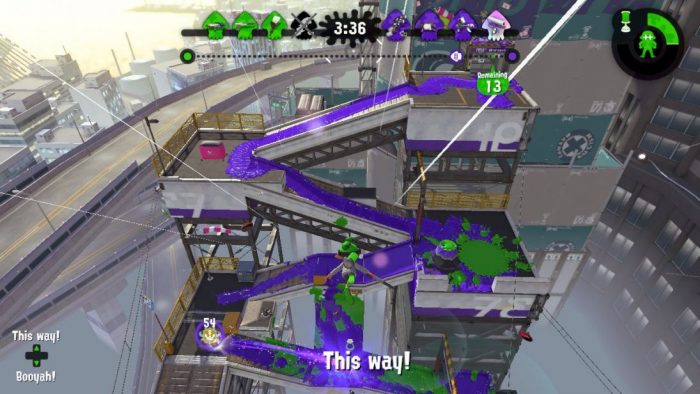 dropping into battle and saving the day never gets old

Inkopolis Square contains everything an Inkling needs to purchase gear, splat enemies, or team up with friends. The Galleria contains one weapon shops and various apparel that should be checked daily for better weapons and clothing. An arcade-like area sits right across from the Galleria for anyone who is interested in any local multiplayer endeavors. Near the online lobby sits a character named Merch that handles special orders and can even help respec a player’s gear in a few different ways.

In Splatoon 2 I made an effort to see how the many gear bonuses can affect my play style. At one point I had a hoodie and shoes which contained bonuses that decreased my respawn time. While wearing both of those items, I did notice a significant decrease in the time it took for me to respawn after getting splatted. The maps themselves feel more important to how the match flows this time around, some of them new and others are familiar yet redesigned enough to see that they weren’t simply ported over. 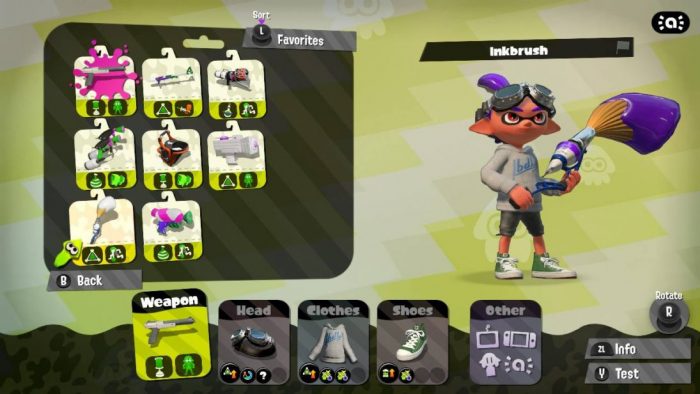 The biggest problem with Splatoon 2 is really Nintendo itself. Everyone knows how matchmaking was handled in the first Splatoon, yet not much has changed in this category. The only way to party up and chat with you friends is to download the Nintendo Switch Online app. This app must be active on your mobile device and will drop players from the chat when they go to check notifications. It will also kick players off the app when their mobile device times out and goes to the home screen (locked mode). For whatever reason, it is likely that the Switch can’t handle in-game voice chat. After two mobile games, Nintendo should know how to handle a mobile app. Many people are now using the app to simply party up and using Discord to chat without interruptions.

Nintendo somehow keeps splatting themselves in the foot and do something well. At the same time, within that terrible app is a section called Splatnet. Specifically made for Splatoon 2, this section of the app tracks your stats and compares how much paint has been used with wonders of the world.. The best part of Splatnet is that clothing and weapon purchases can be made while away from the game. Some of this gear is even exclusive to Splatnet. Unfortunately, Splatnet is connected to the terrible voice chat app; it would be really nice if it was a separate app entirely.

Splatoon 2 somehow manages to still be great despite Nintendo’s shameful excuse for an online infrastructure. The motion controls hold up very well in handheld mode, making it an enjoyable experience even if I’m not in front of my television. While playing, I have found myself saying “I’ll stop after this next match” when that is obviously not the case five rounds later. The Splatoon franchise continues to stay fresh, and yet it is very difficult to give Nintendo a pass for their poor practices simply because they made another great video game. if that wasn’t the case, I would have gladly scored it higher.

Despite Nintendo splatting themselves in the foot yet again, the Splatoon franchise remains fresh. Splatoon 2 succeeds in making a number of improvements while keeping everything we know and love when it comes to these odd Squid Kids.