Still F.U.N. after all these years! 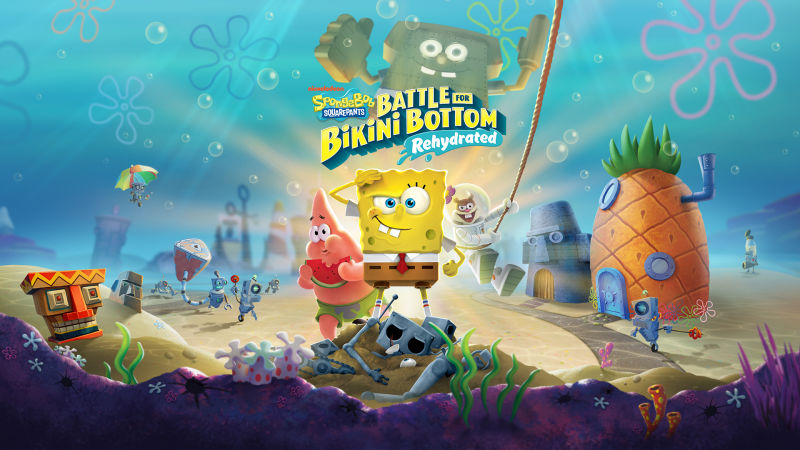 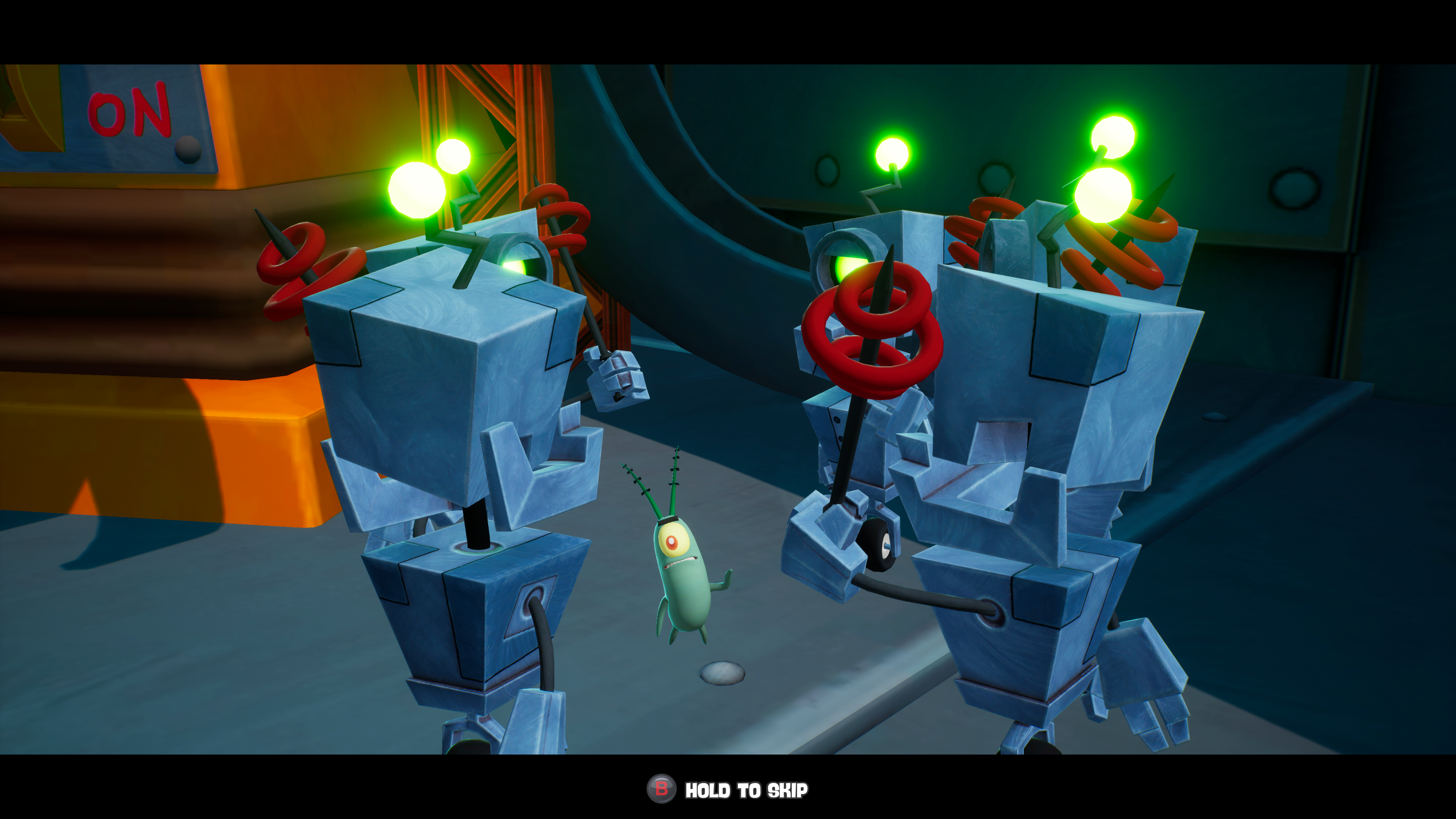 Bikini Bottom is once again threatened by Plankton’s dastardly schemes!

SpongeBob Squarepants: Battle For Bikini Bottom was one of the most highly regarded and beloved licensed games to come out during the era of the original Xbox, PS2, and Gamecube. Now, thanks to THQ Nordic and the folks at developers Heavy Iron Studios and Purple Lamp Studios, the game has been Rehydrated and given a new coat of paint for modern platforms. Right off the bat, fans will notice that the new graphics closely resemble the recent 3D movies while simultaneously leaning more towards the look of the classic 2D show. I like this look overall as it offers a little something for everyone, much like the show it’s based on.

Battle For Bikini Bottom Rehydrated is about as wholesome as games can get. You won’t find much here to raise an alarm that isn’t also in many of Nintendo’s best and most beloved platformers. Quirky, colorful characters and plenty of zany worlds to explore will keep kids and adults alike entertained for hours. There is no foul language, sexuality, no mention of religion, or anything else that might earn a T rating or worse. All of the violence is against robots or jellyfish and other enemies that SpongBob has encountered in the show. 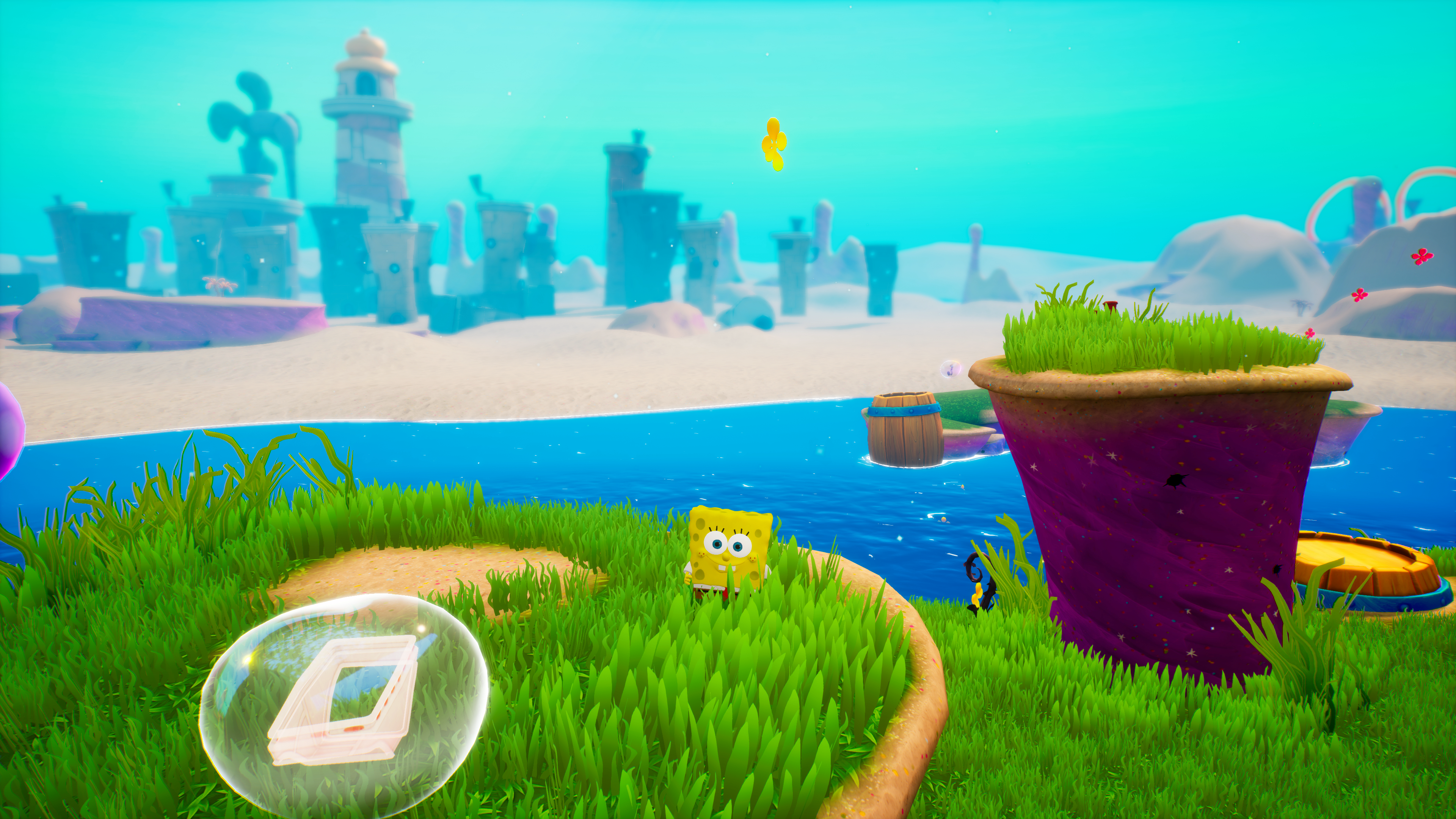 Like any good platformer, BFBBR is filled to the brim with various collectibles, like shiny things and Spongebob’s Underwear!

Battle For Bikini Bottom Rehydrated (BFBBR) is not a remake, but it also doesn’t feel like a cheap attempt to cash in on players’ nostalgia for the original. The developers have added some new content this time around in the form of boss battles (like a Robo-Squidward) that were cut from the original game. There is also a new two-player horde mode that can be played both locally and online with friends and family. That being said, much of the gameplay—which involves platforming through 3D objects, searching for collectibles, and defeating simple enemies—is largely unchanged, and this is where some gamers may start to find fault with the game, as it can feel very dated at times.

For example, the larger enemies and most bosses go by the rule of three, meaning that once you hit them three times the fight’s over and the player can claim the spoils of victory. This usually comes in the form of a collectible, of which there are many in BFBBR. Shiny things act as a currency and can be used to unlock new levels in the hub, purchase Golden Spatulas, or open up certain sections of a level. Other collectibles include SpongeBob’s underwear, which act as Hit Points. Four pairs can be carried at once and you’ll always be collecting SpongeBob’s undies even when playing as Patrick or Sandy. You’ll also be finding Patrick’s socks, which didn’t seem to have any effect on gameplay other than adding a new goal to complete. 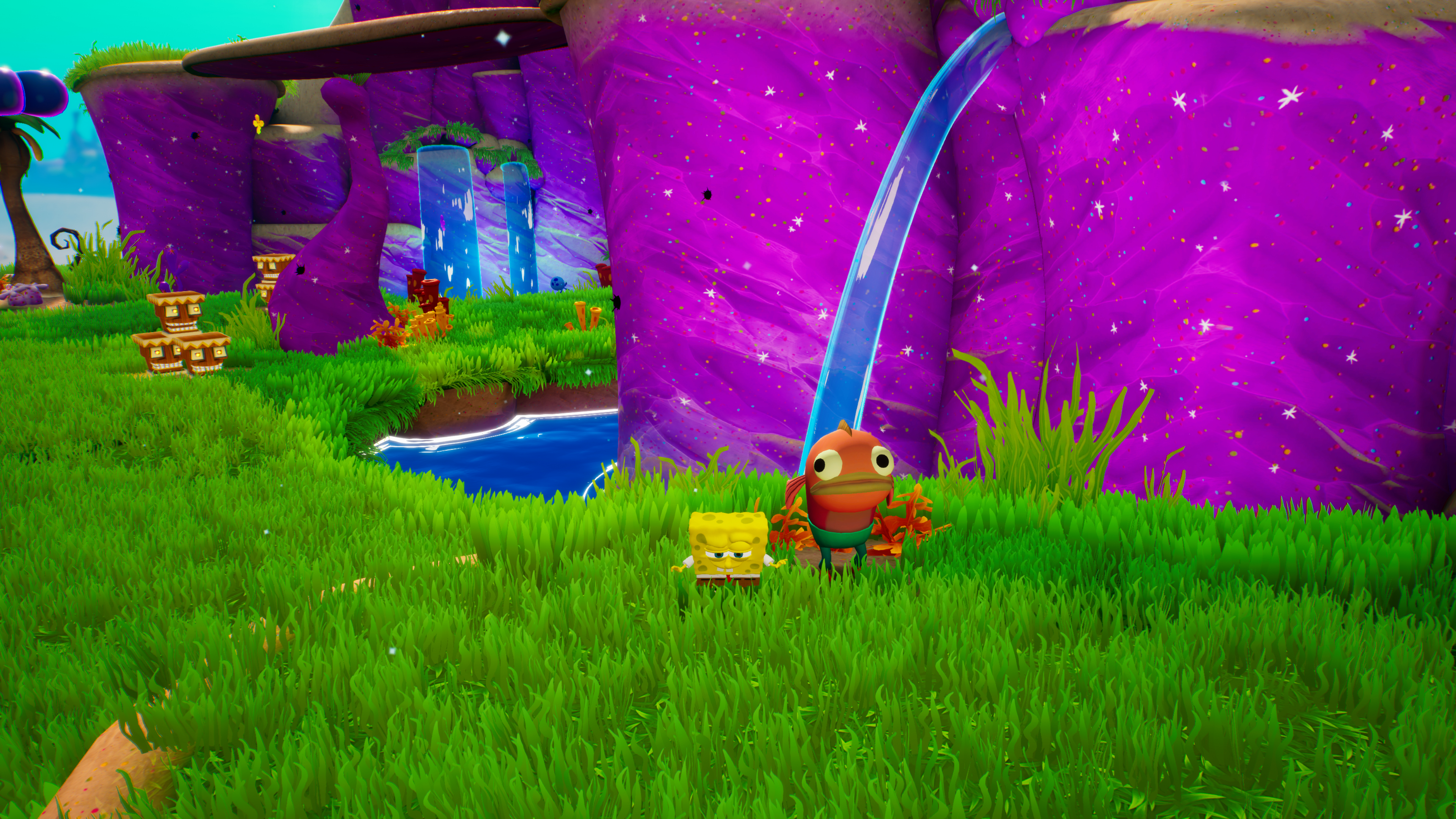 Holding LT allows SpongeBob to sneak up on patrolling robots!

Another aspect of gameplay that some may find outdated is the need to trek back to a Bus Stop to swap out characters, as some levels almost exclusively require the skills of Patrick or Sandy. Each character has their own strengths to offer. SpongeBob is your all-around hero who can jump high, sneak up on enemies, and fight with the best of them. Sandy uses her lasso to lash out at enemies from a distance and can even use it as a helicopter to glide long distances and cross gaps in the levels. Meanwhile, Patrick is kind of a tank, picking up and throwing stunned enemies and most objects in the environment to hit other enemies or distant switches, which opens new paths in a level. This switching requirement didn’t bother me all that much, though. What was really jarring was the new voice actor for Mr. Krabs. Almost all of the voice cast of the SpongeBob TV show return to reprise their roles for this remaster, with the exception of Clancy Brown.

While I understand that VO work can be all over the place sometimes, all of the characters are a mirror image of their cartoon counterparts…and then there is Mr. Krabs. While his IMDB page is extensive, and he has played the character before, Joe Whyte’s portrayal of Mr. Krabs falls flat in this release. Anytime Mr. Krabs was on screen I cringed at every spoken line, which sounded like a really poor imitation of Clancy Brown’s iconic performance. That’s not to say that Joe isn’t a great actor—his resume speaks for itself—it’s just that he didn’t quite nail the inflection in Mr. Krab’s voice and delivery of certain lines that makes him such an iconic, funny, and beloved character.

Despite these qualms, you won’t really find a better game for families at the moment. BFBBR is still one of the best licensed games ever made and while it doesn’t eschew any gameplay conventions of the past, it does offer enough new content to please both longtime fans and those new to the character and franchise it’s based on. If you’re looking for a fun, easy game to enjoy with your kids, this is the one to get right now, and the best part is that it comes at a budget price of just $29.99 on most platforms. With the Switch tax on physical copies (printing the game to the cartridge costs more for the company which means consumers often pay a higher price at retail) it may be a bit more, but it’s just good clean F.U.N anywhere and anytime at all down here in the deep blue sea! 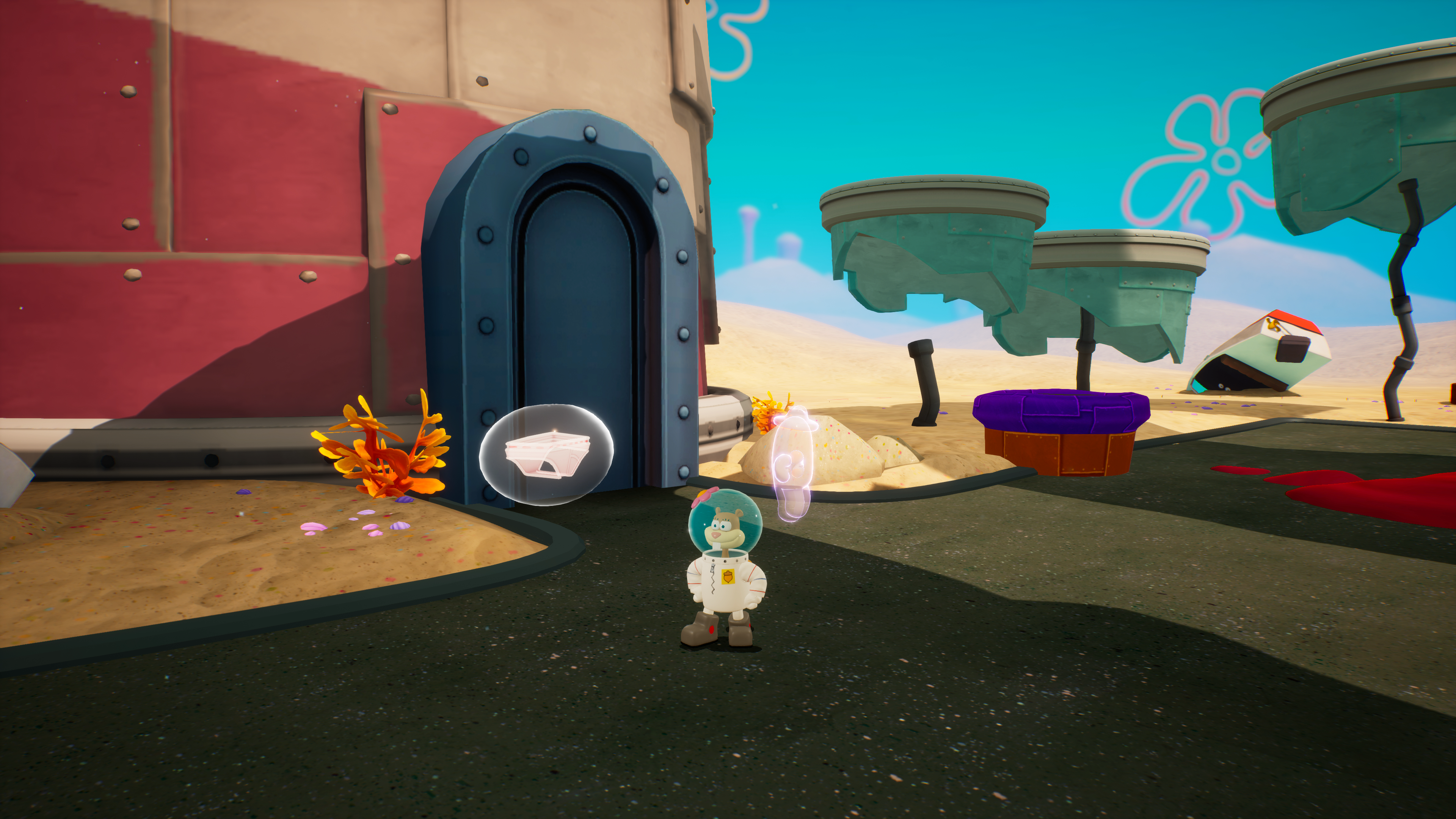 SpongeBob Squarepants: Battle For Bikini Bottom Rehydrated is a fun, colorful, and funny remake of the beloved classic that brings together everything fans love about the show.