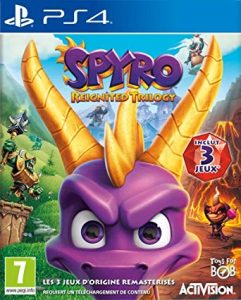 Originally developed by Insomniac Games, Spyro was birthed out of the late 90’s. Following a successful trilogy, various other Spyro games developed by other parties were released on handheld and consoles. But the most successful of them all were the three released on the first PlayStation. 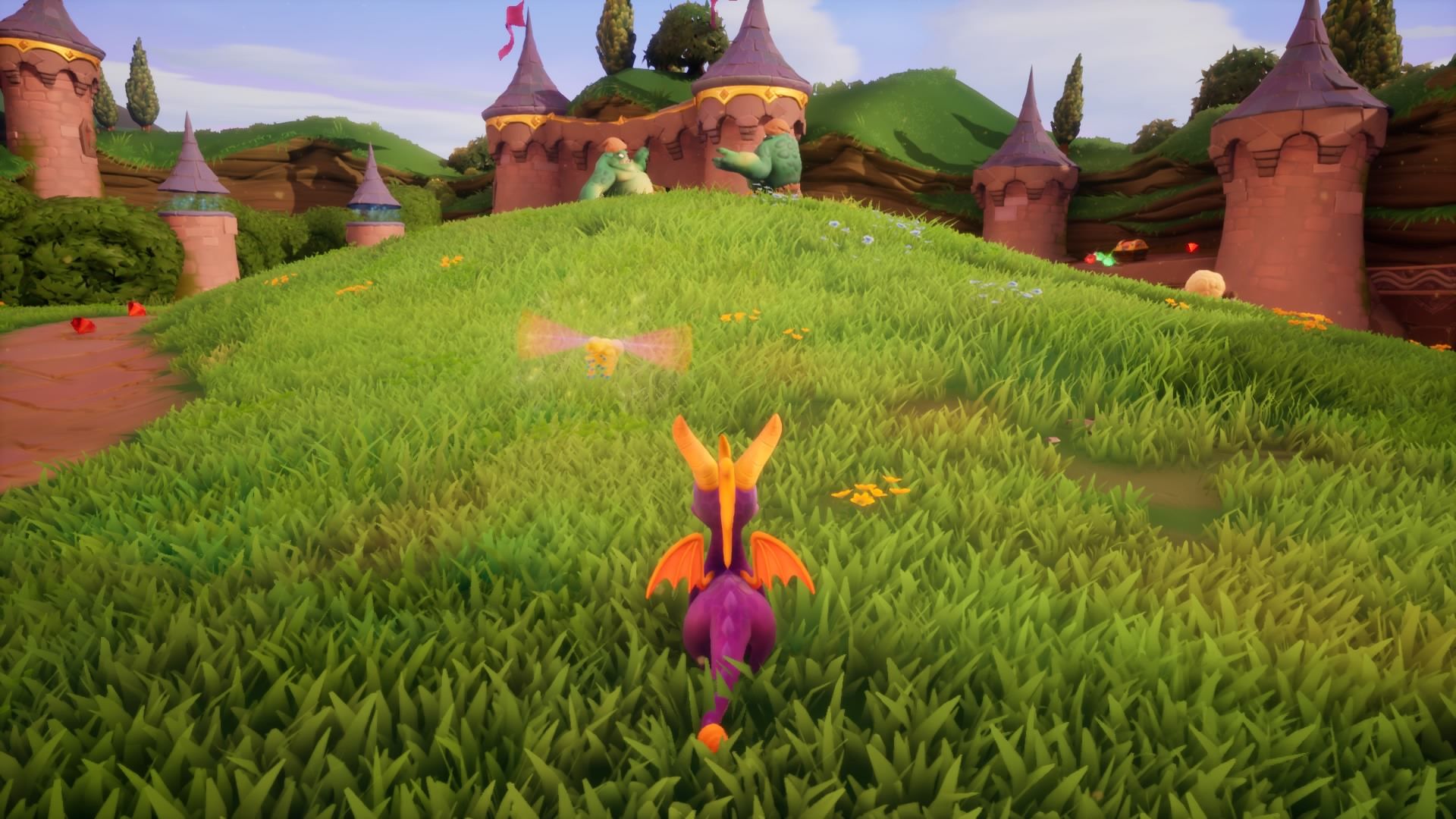 Spyro the Dragon, Spyro 2: Ripto’s Rage! and Spyro: Year of the Dragon were all lauded with praise and became instant classics when they were first introduced to gamers both young and old. Almost every single gamer who owned a Playstation owned one of the Spyro games. Releasing the original trilogy as an HD remake was a fantastic idea by Activision, even if most of the sales were by young adults in their mid to late twenties. Will we adults sit down in front of our Playstation 4s and play a game that was originally made for a younger audience without shame? Yes, we will. And who better to work on it than the developers of the most recent successful Skylander series?

Violence: My only concern in these Spyro games is the cartoon violence. The very nature of the Spyro games is to defeat foes by either charging into them or burning them with your fire breath. Once attacked, enemies simply disappear. Otherwise, the game is neutral. 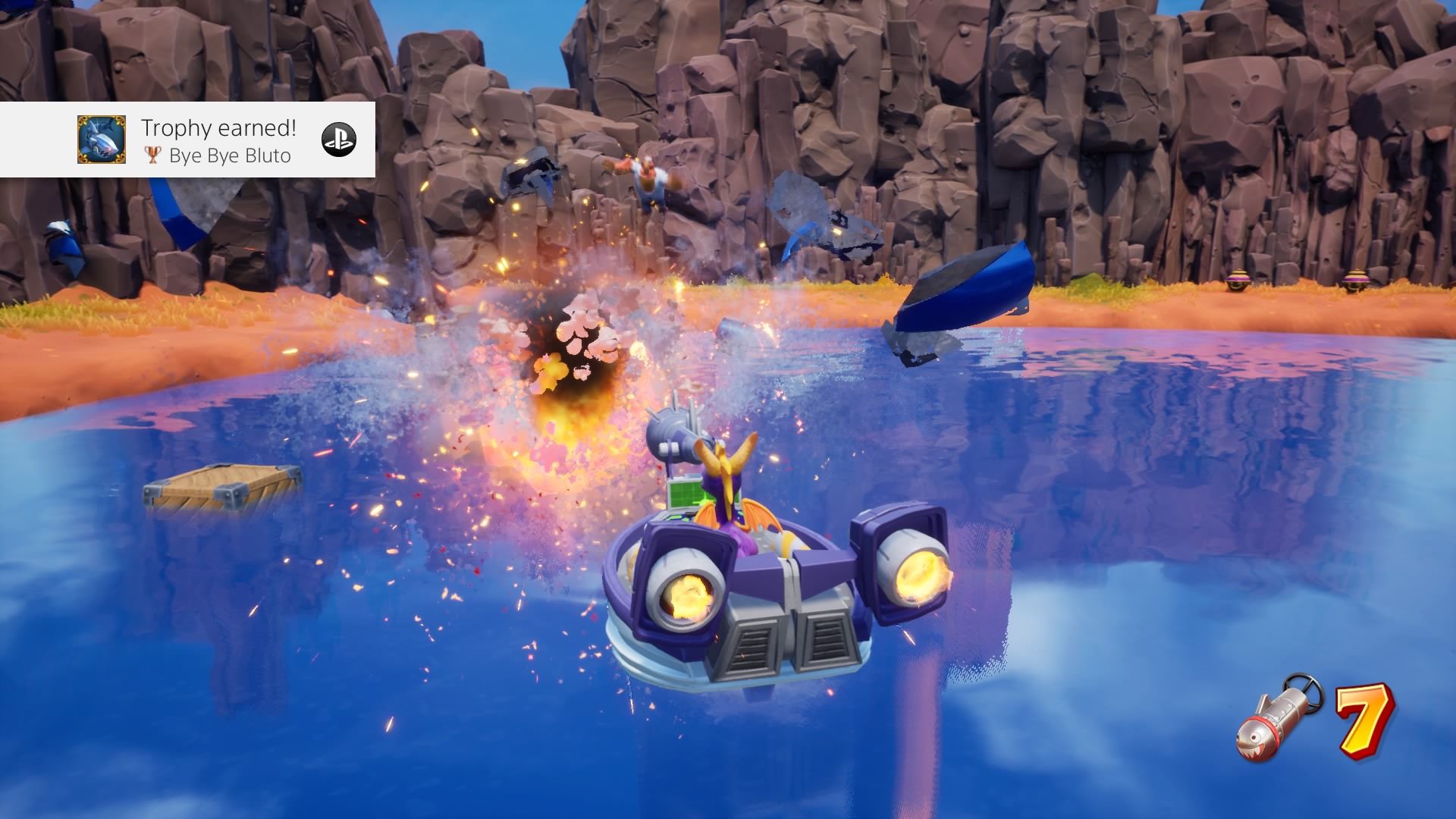 Before owning any console besides those by Nintendo, I remember visiting family friends who did not have kids my age, but they did own a PlayStation. Thankfully, realizing my boredom, they allowed me to play a few games, including Spyro the Dragon and Crash Bandicoot, marking my first introduction to the world of Sony. So as an adult, once I heard that the original trilogy was to be made remade in HD, I pre-ordered it. I never really got the chance to play them in their entirety, and this was a great opportunity to do that. I was not disappointed.

What mostly drew me was the fact that it was being remade using Unreal Engine 4. Practically, any game made using UE4 comes out looking beautiful, with smooth textures and landscapes you can’t help but pause to gaze at. It is uncanny just how new and different the Spyro games look. It’s one thing to watch them being played on Twitch or YouTube, but seeing them for yourself is another thing. I found myself on several occasions pausing just to admire the amount of detail, care, and effort that went into rebuilding every single level exactly the way they were on the original Playstation, but through a high-res new lens. 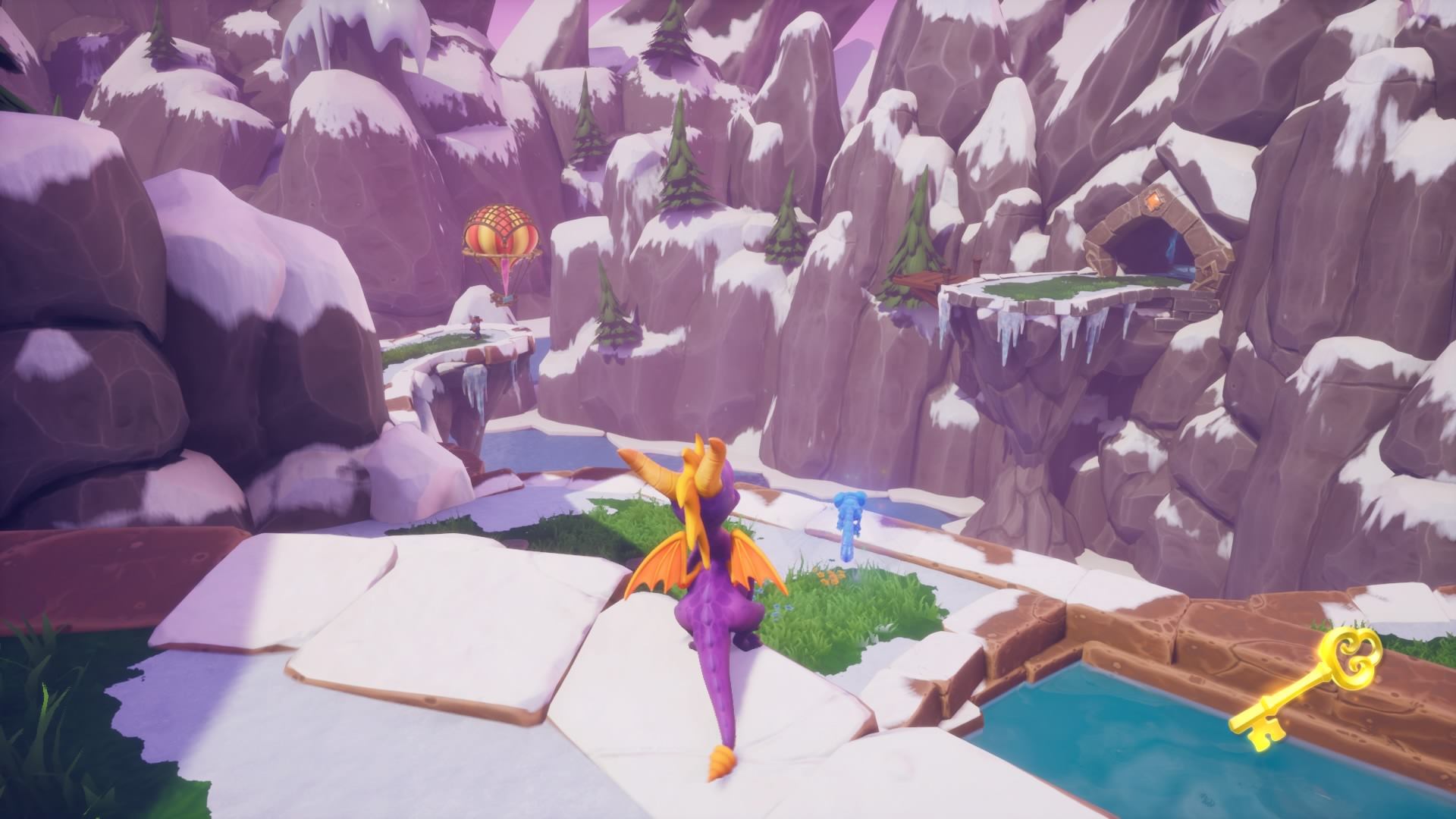 Another part I love about the graphics are the remade character models. The characters were once ugly, poor, square, blurry, and unrecognizable. It was the best Insomniac could do with what they had in that era. The difference in the Spyro Reignited Trilogy is amazing. Characters enjoy brand new models, and I can see facial expressions! Technology!

But Spyro’s new and improved look is not the only thing I love about the HD remodel. The classic charge-and-burn gameplay returns. Spyro still charges, still roasts, swims, glides, and slams into enemies like he originally did, but smoother. If all you change about a game is the graphics, but keep the still-fun core gameplay, then that game is indeed a treasure. These games are exactly that. 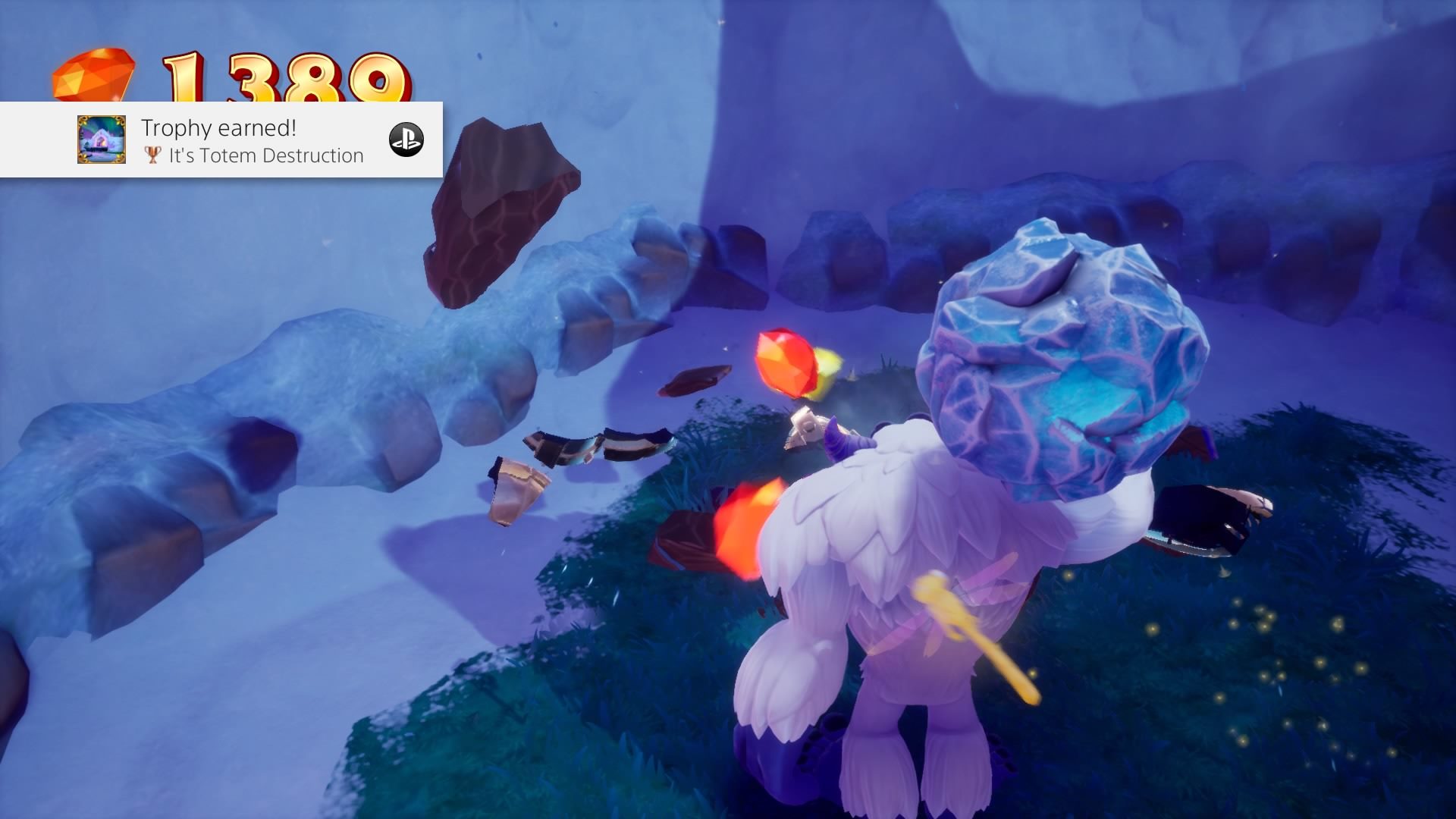 You can also play and control some of Spyro’s friends, like the Yeti!

In the trilogy, Spyro will need to collect objects of some sort, whether that includes other dragons, dragon eggs, relics, totems, or friends who need help. But let’s not forget the most important one: gems. Throughout the young dragon’s journey, he will repeatedly run into a greedy bear named Moneybags who will frequently demand gems in order to continue down a path or to open up a bridge, etc. The easiest way for this to never be an issue is to collect all the gems you find along the way. 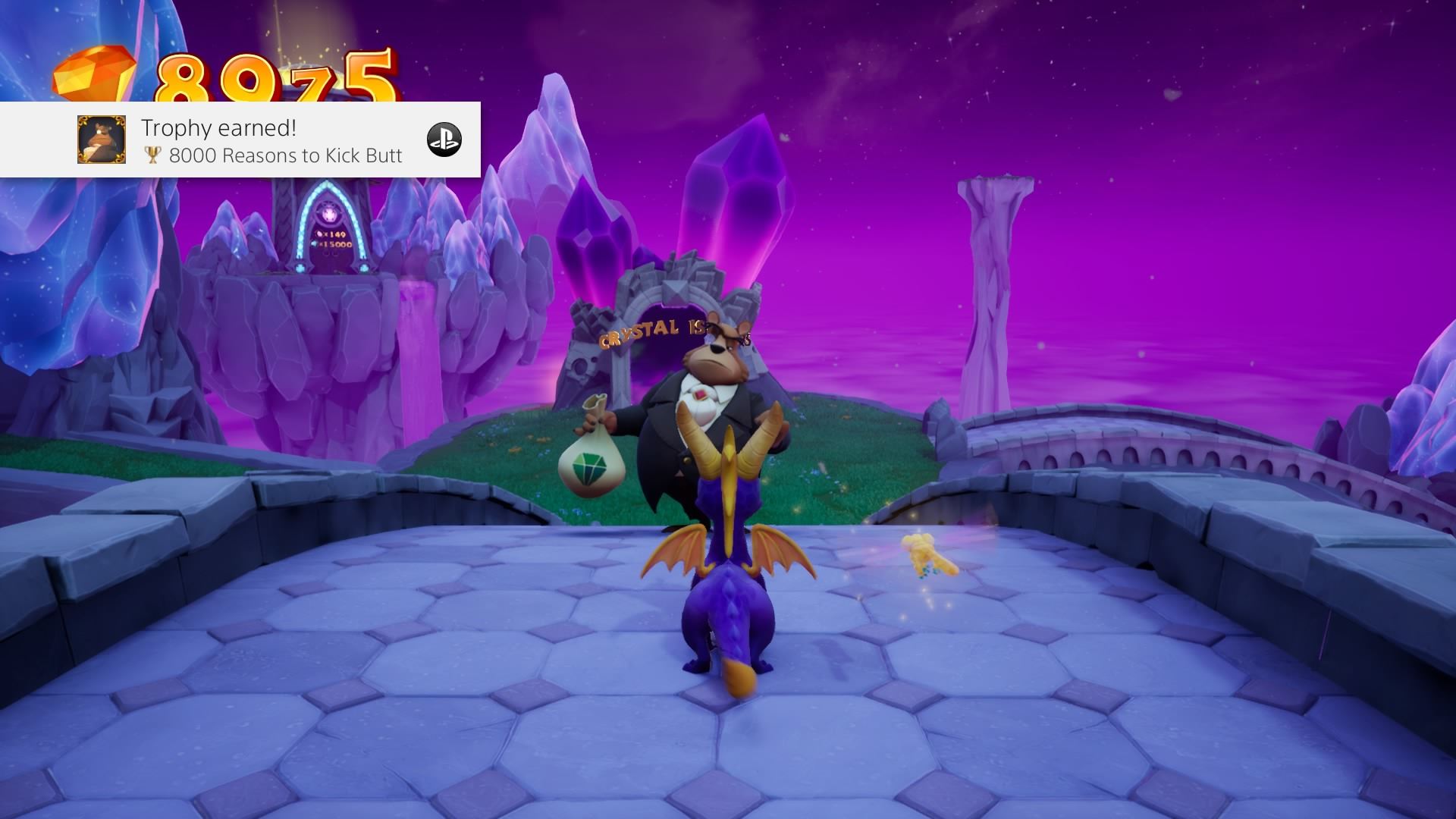 At the end of each game, there is always an additional level or area that is only accessible once Spyro has collected every single item and gem that there is motivation to continue playing. Some might say that the Spyro games were some of the first to introduce this ingenious concept of unlocking more content  through the requirement of collecting all collectibles. This often works by keeping gamers playing for hours. I normally don’t care for such tactics, but I just might return nevertheless since I came very close to accomplishing 100% in Year of the Dragon…

As I stated before, Spyro Reignited Trilogy is beautiful and the care and attention to detail can literally be seen in every single level. The maps are as simple as I remember; I am able to run through most of them in 30 seconds or less. In Ripto’s Rage, some levels are so short, I can finish the main mission in 5 minutes! But the length of each world traveled to isn’t a problem, as there are many worlds to traverse and explore for hidden collectibles. My favorite part about Spyro is the creativity invested in the crafting of all these different worlds. To name a few, there’s a volcanic world full of goats who like to party, a swamp world with giant candles and rabid piranhas, and a frozen tundra with Eskimos and ice wizards. The respectable people over at Insomniac have some pretty great imaginations and ideas. 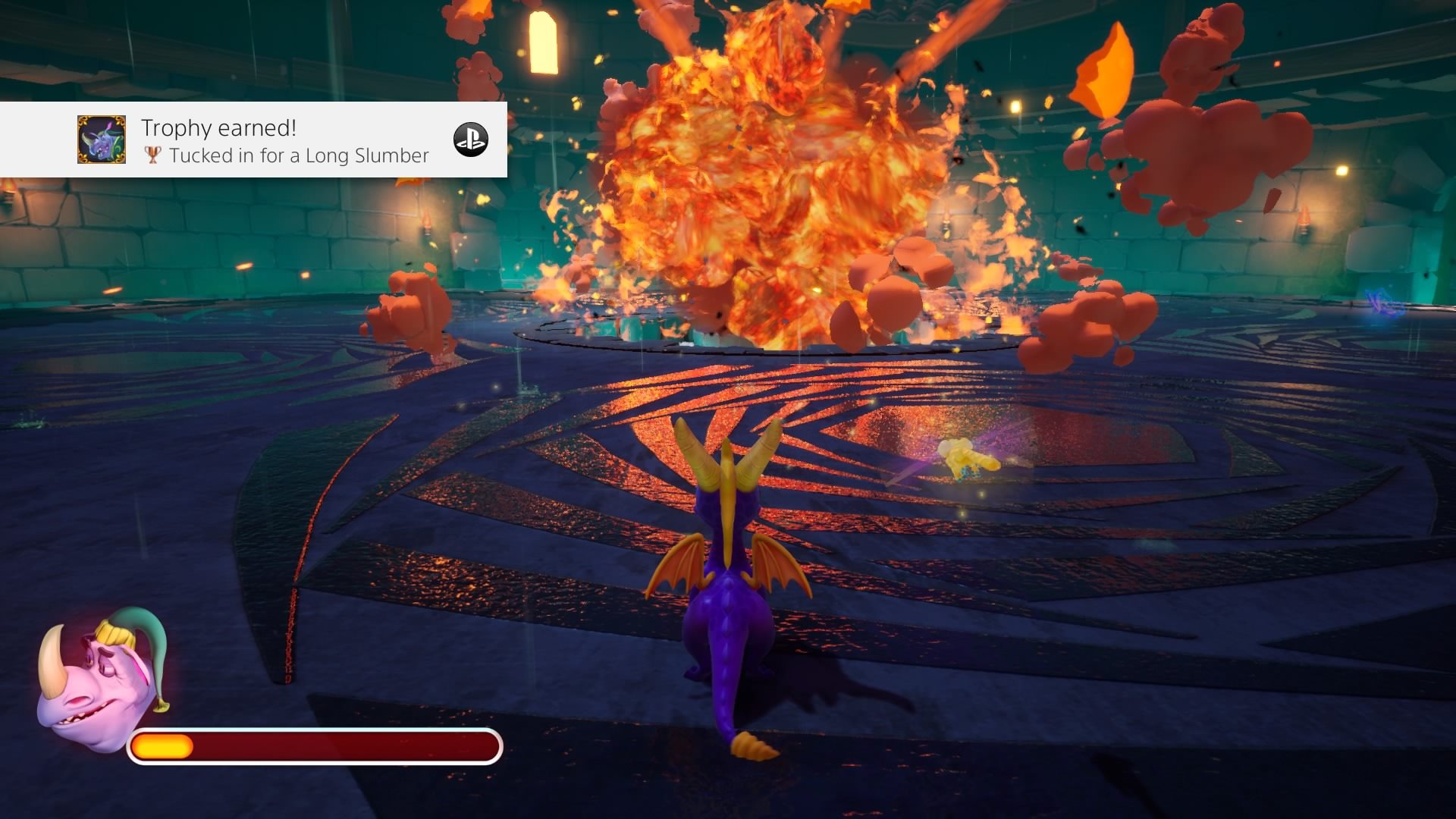 Mini boss battles lie among the many extra challenges to find

One of the few grievances I have against the trilogy is really against the original games. The Spyro adventures have terrible transitions and will often leave things open-ended or will have an abrupt ending. Once I defeated Gnasty Gnorc at the end of Spyro the Dragon, there is a short cutscene of Spyro making a witty comment, and then it cut to the credits. I appreciate that in later games, there was more of a conclusion to the story, especially in Year of the Dragon. 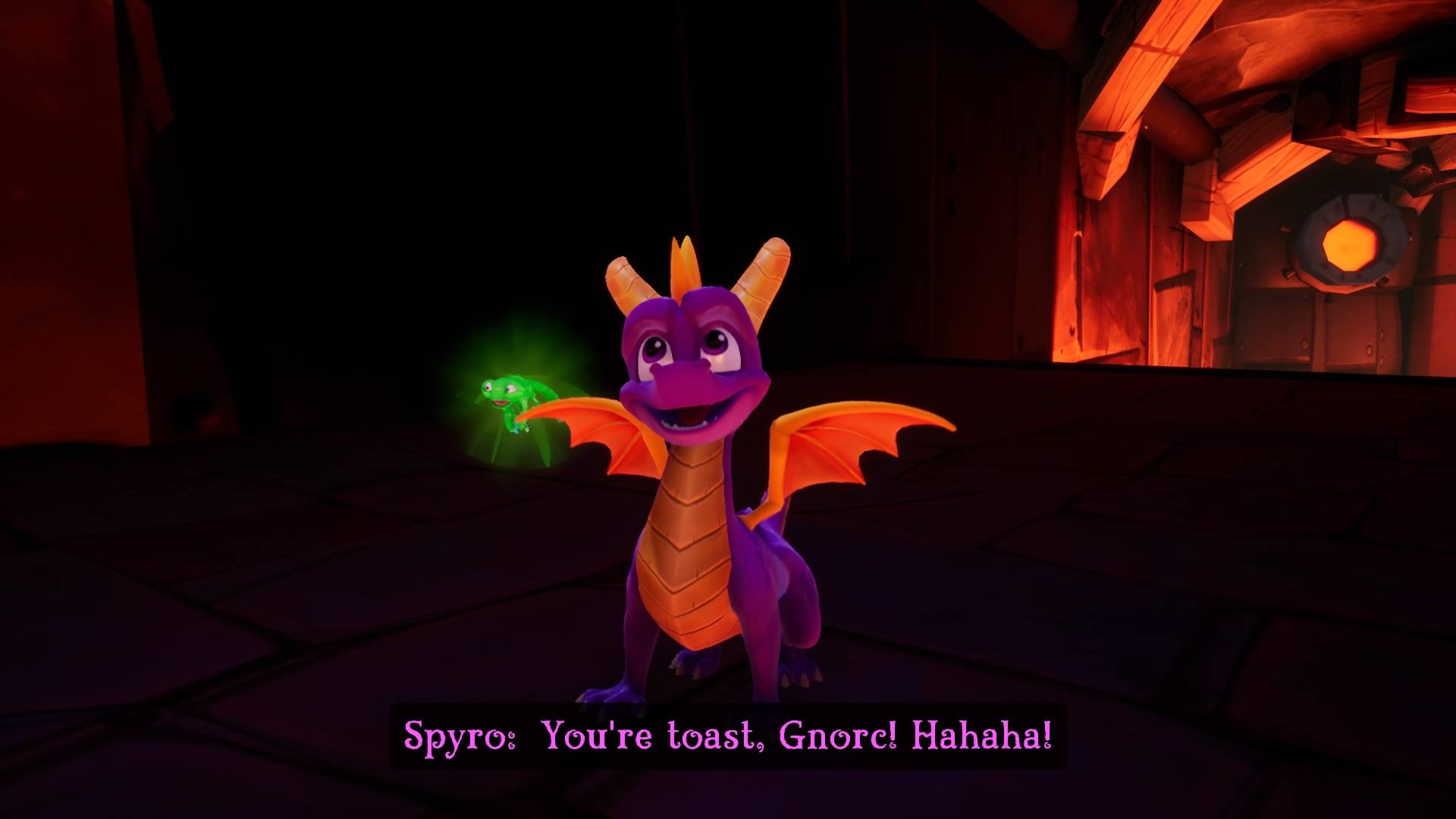 After this line, the game cuts to the credits.

As for the difficulty, the games are simply far too easy. The extra missions and collectibles present some sort of challenge, but if you’re skillful enough and are able to master the controls, these are still a breeze to accomplish. But, like I stated before, I can run through most levels and maps under 30 seconds—some in 10 seconds! The real challenge, of course, lies in the ability to collect everything to unlock the extra content.

Strangely enough, the boss battles vary in difficulty. One would think that the final battles would be the most difficult, but I found some to be randomly challenging. The middle boss in Ripto’s Rage was, by far, the hardest boss in all three games. On the other hand, the final boss in Year of the Dragon was, by far, one of the easiest! Now, there is no formula or script in game design dictating that final bosses in all games should be the hardest to battle, but typically, that’s the expectation. 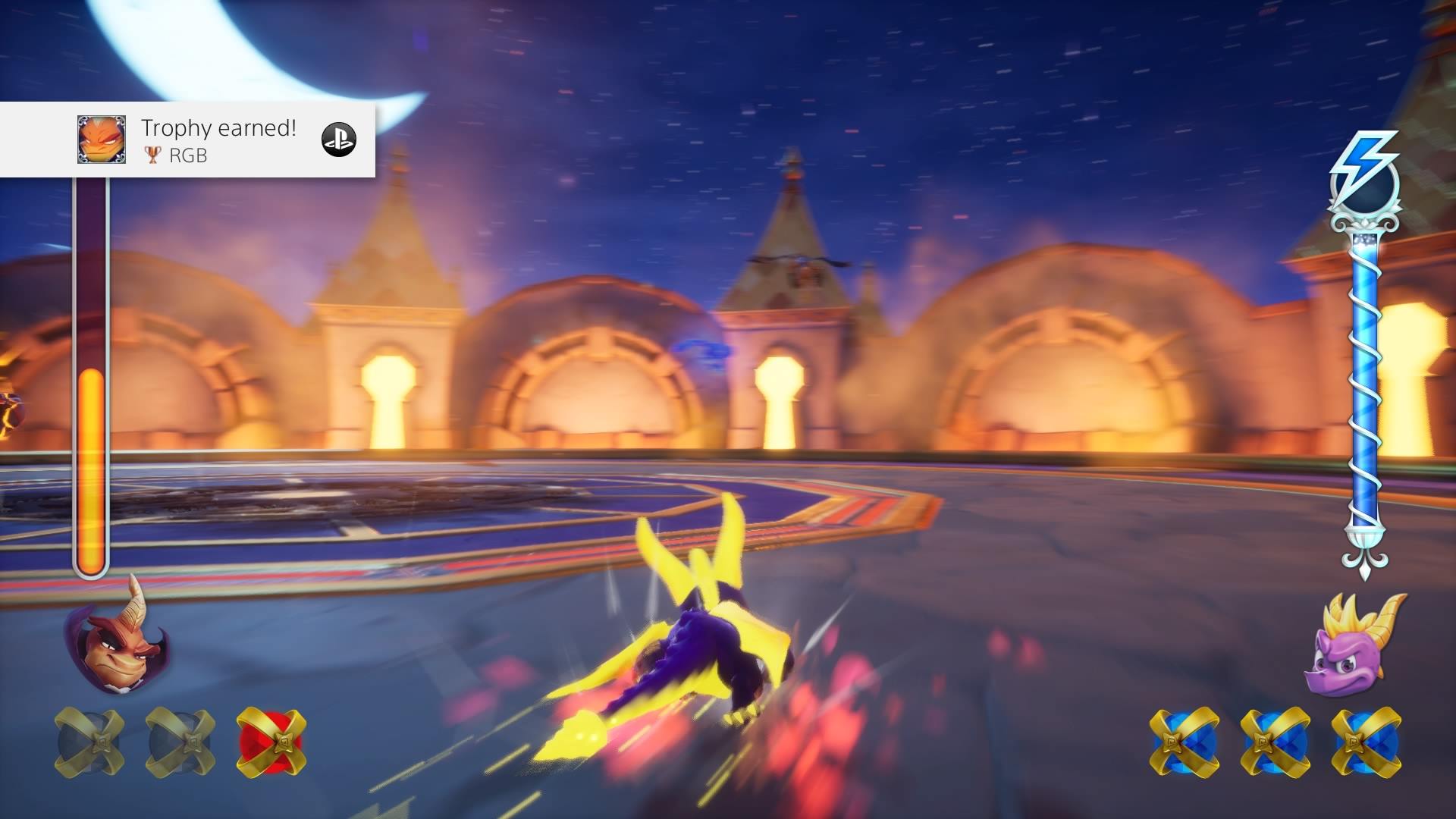 The fight against Ripto was fun, but too easy

New, revamped graphics means that the characters and environments had to be drawn from the ground-up. This also means that there were artists, cartoonists, illustrators, and animators involved. Some of the game’s art and concepts are shown off in the credits, but it’s not enough! I love the drawings and the amount of love that went into recreating every single dragon, companion, and NPC in the game. I would not mind putting these tributes on my wall. 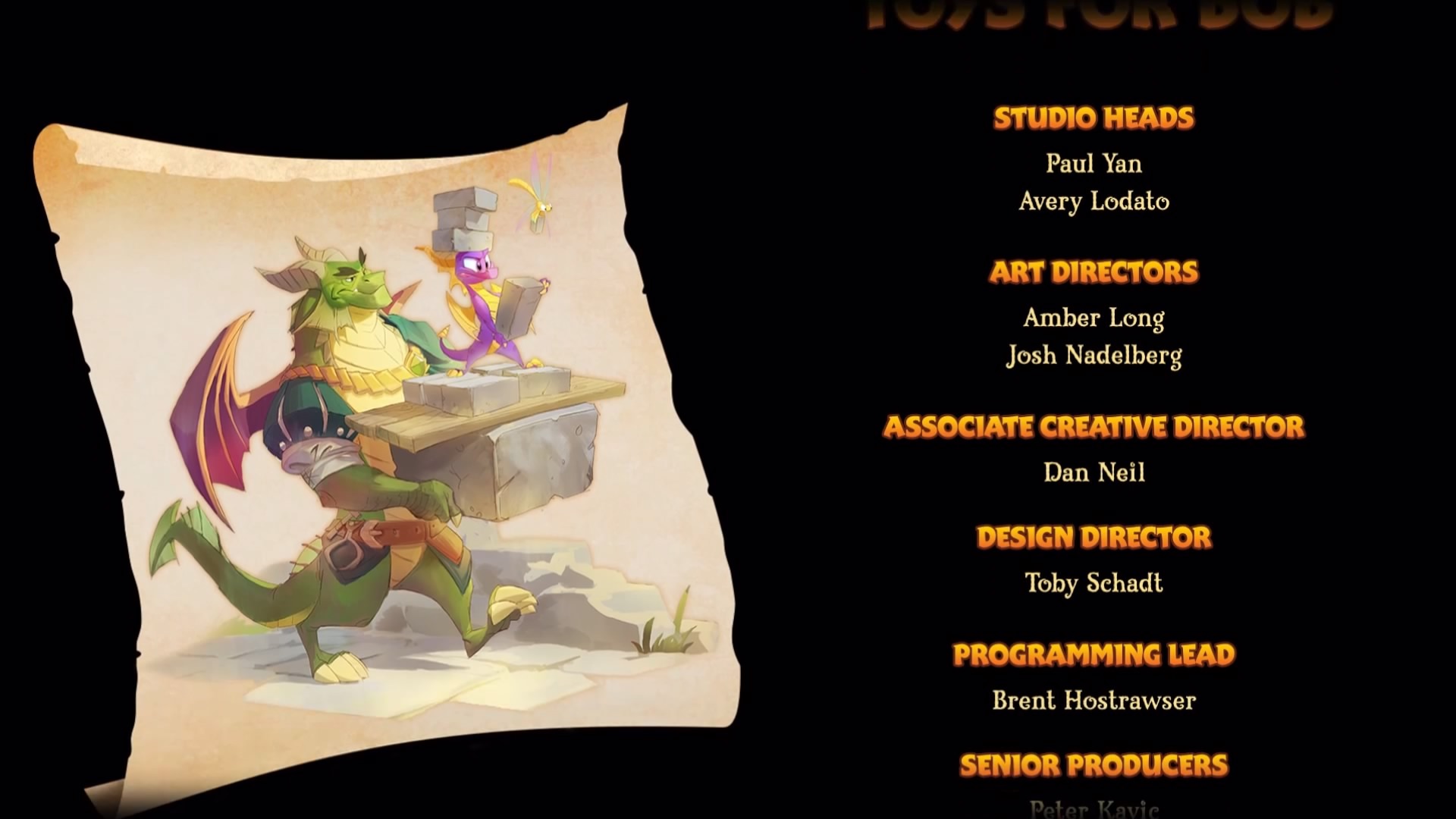 Love the concept art in this game!

I was also excited for Tom Kenny, the voice of other popular cartoon characters (Spongebob Squarepants), returning to voice Spyro. Other returning artists include Stewart Copeland, who composed the original soundtrack for the trilogy when it was first released on the PlayStation.

If it wasn’t clear, Spyro Reignited Trilogy is a delight. Yes, it tends to be easy, the endings are abrupt, and the difficulty is inconsistent, but it’s still a blast to play. The graphics alone are reason enough to shell out $40 for it. Toys for Bob successfully rebuilt this game from the ground up. One thing I do not see, however, are more Spyro games in the future. But, who knows? Maybe Spyro will be made into a movie? If Sonic got his own movie, anything can happen, right? 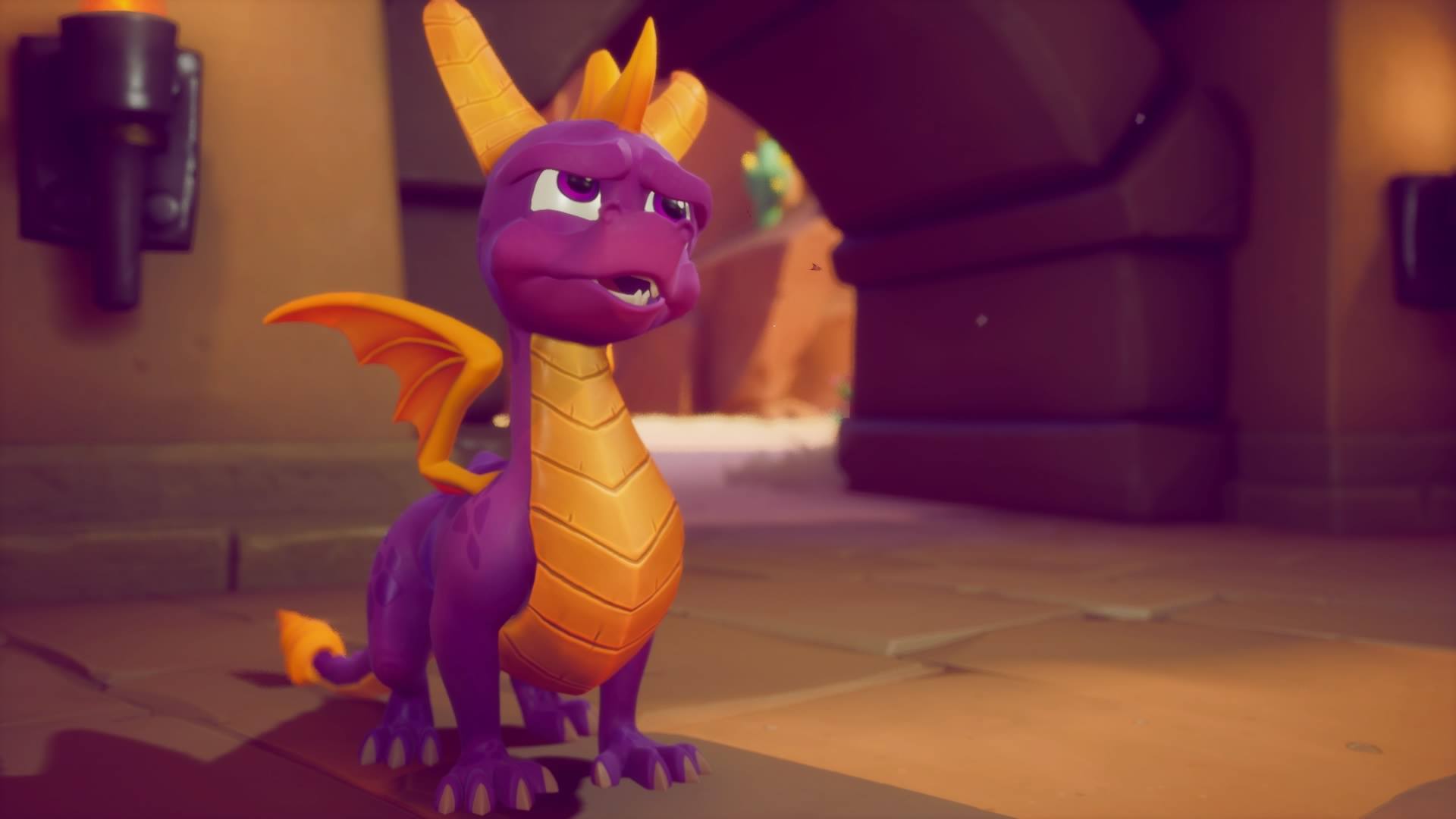 Spyro’s facial expression says it all.

Spyro Reignited Trilogy is a beautiful game and highly recommended for those who played the originals and those who are new to the series alike!