Review: Stick it to The Man! (Switch) 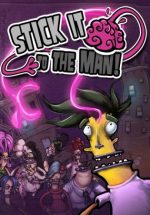 Stick it to The Man! is an indie game from Zoink games. It was first released in 2014 and came to almost every platform in the last couple years. Owners of Apple products can even find it on the app store. Unfortunately, it looks like Android is the only platform it hasn’t come to yet. So, if readers really want to check out the game after reading this review, there are plenty of options to do so.

The Switch hasn’t even been out a year and so many indie games have made their way to the platform. Stick It to The Man! is another we can add to that list, but for a very specific reason. Zoink Games has a new game coming the the platform that was actually announced during a “Nindies” Nintendo Direct before the Switch was ever released. It’s called Flipping Death, and its being published by EA. It is very likely that Stick It to The Man! is now on the Switch in order to build up hype.

Spiritual Content: In one particular chapter there are ghosts/spirits present. In this same chapter, there is a medium that believes she can talk to spirits. Later into the game there are zombies present.

The player will be using telepathy to read characters’ thoughts and use a telepathic arm to pull items from their thoughts. This seems like it could fall into the category of spiritual content, but it is actually a small alien inside the main character’s brain that gives him the ability to do this.

Violence: There are sequences in the game where the player will have to deal with enemies in a non-violent manner. When the player is sneaking past enemies, it is possible to be caught; upon discovery, the enemy will shock/stun the player.

One of the chapters takes place in an asylum. One section of this stage shows a patient receiving shock therapy. Later in the same chapter, a giant zombie whale is stabbed with a harpoon. A character can be seen pulling a human arm out of a cooking pot in which other parts can be seen hanging out. Lastly, a woman is shot with a gun which is followed by a blood stain around her wound.

Language: There is no profane language to be found.

Sexual Content: There is no actual negative sexual content, however there is a scene in which a female nurse is contemplating whether her parents would approve of her dating the zombie she is trying to teach. The zombie is ironically thinking about his love for her and how he would like to give her a gift. After this particular puzzle is completed, the woman dies and also becomes a zombie, so they do live (or not) happily ever after in a way. I figured I should mention this scene simply because of how strange it is.

Drug/Alcohol Use: Various characters can be seen holding lit cigarettes or hanging from their mouth. One of the chapters is located in the city and one of the buildings is a bar, there is interaction with a character there, but no drinking is depicted at all in this instance. 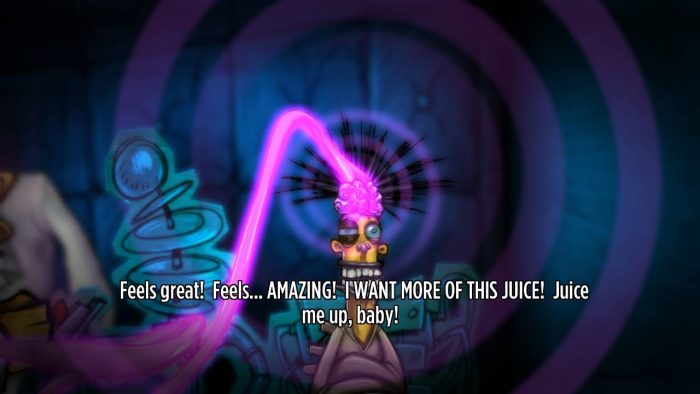 Anyone who has a history with Nickelodeon in the 90’s will have a great appreciation for Stick It to The Man!‘s art style. When looking at the game I instantly think of Aaahh!!! Real Monsters or The Ren & Stimpy Show to name a few, or if you want to go early 2000’s, then I think of Invader Zim. That art style may look ugly to some, but those shows prove that it works if there is plenty of personality behind it. The devs have pulled off that style successfully and created a unique world.

The story is centered around a regular guy named Ray, who happens to have a career in field testing hard hats. On one particular night, he gets hit in the head and knocked out by a falling object and wakes up with telepathic abilities and a telepathic spaghetti arm growing out of his head. Ray makes the decision to find out if something is wrong with him or if he’s just plain crazy, but he goes on an unexpected journey. An evil mysterious character known as The Man is after whatever is inside of Ray’s head. 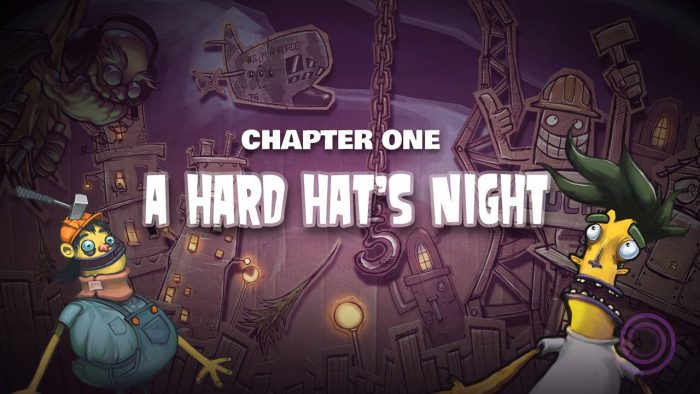 The world of Stick It to The Man! sits on a 2-D plane in paper form, sharing some similarities to Paper Mario in that regard—our protagonist even re-spawns from a roll of paper. Players will take control of Ray and read the minds of every crazy character around the world to pull thoughts from their minds and solve puzzles. Their thoughts create items that come in the form of stickers. Ray uses a telepathic Spaghetti arm to pull the stickers from people’s thoughts and slap them onto other characters and various parts of the stages to progress. 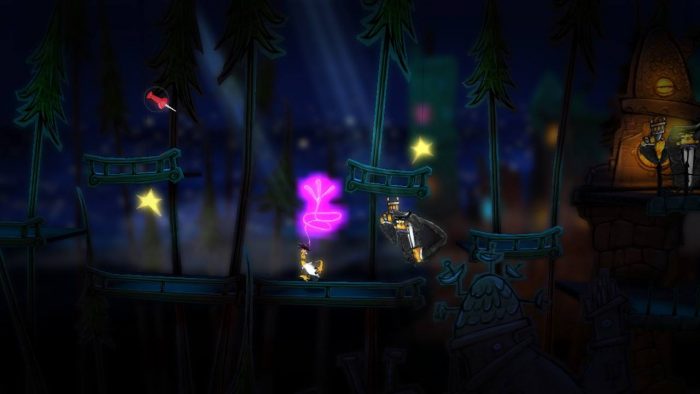 Players will get around the stages through some light platforming elements and some very light stealth gameplay to get around enemies. In various sections of a stage, there are some henchmen that are out the capture Ray. Players will need to read their minds and pull stickers from their thoughts to get by. The basic formula of gameplay boils down to those two things, and they can feel tiring during extended periods of play; I found myself wanting to put the game down after completing a chapter or two. However, this formula does succeed in showcasing the characters and world around Ray and breathes some life into the paper world. 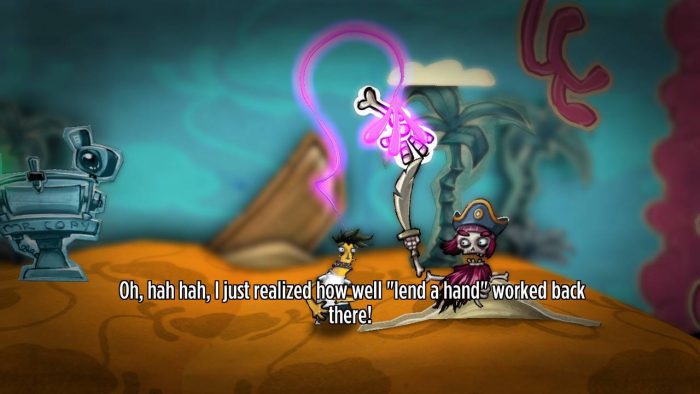 I did not get the chance to play Stick It to The Man! on PS4, so I don’t know if the game utilized any features of the controller. However, they did make use of the Switch’s HD rumble in a clever way. It kicks in when the player reads a character’s mind. A spiral is seen around the targets character’s brain during the action, and the rumble moves along with that special effect as if you are feeling the device reach into a character’s mind. It is nice that Zoing Games makes use of the resource rather that under-utilizing it like other games on the platform have done.

What I most enjoy about Stick It to The Man! is the soundtrack. First of all, the main theme is “Just Dropped In” by Kenny Rogers and The First Edition. This song is such a clever addition because it fits so well with the theme, I had it stuck in my head for days and couldn’t get it out. On top of that, the soundtrack has a lot of jazz in it and a nice ensemble of instruments accompanying each track—very pleasant on the ears. The slow music also adds to the presentation by giving it a dreary grimness rather than the dark grittiness that is so popular these days. 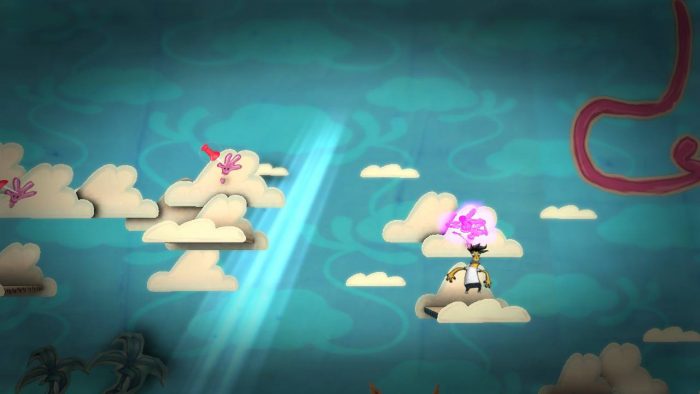 Ray’s dream sequence attempts to drive a brighter tone, but slowly sinks back down to the dreary-ness.

When it all comes down to it, Stick It to The Man! is a decent short story with a well-established setting. It is the characters in the world that you want to see. Some particular examples are in the Asylum chapter or out in the city during a later segment. If I gave examples of these wacky characters that would likely kill some of the exploration and discovery that this game encourages the player to do. The walls can literally be pulled back in some stages to go deeper into Ray’s world, and there is even a count for completionists to read every single mind in the stage.

Stick It to The Man! is a great experience on any platform you decide to play it on. It is short and sweet, which is a good thing. Many games these days are open world and take hundreds of hours to finish. Anyone can finish Stick It to The Man! in around five hours. The game ends in such a way that leaves things open for more, and I do hope the developers decide to make a sequel at some point. Until then we have Flipping Death on the way, which seems to be another promising title from Zoink Games.

Stick It to The Man! has a unique presentation that takes players back to the old school days of Nickelodeon. Such an art style needs a unique world with wacky characters and well written dialogue, and we get all of that during Ray's unfortunate adventure.