Review: Stygian—Reign of the Old Ones 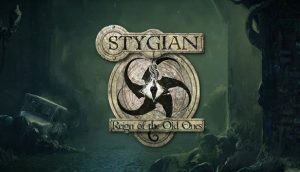 Birthed from a Kickstarter campaign, Stygian: Reign of the Old Ones was developed by Cultic Games, a group of individuals based in Istanbul, Turkey. The idea for this game came from a mutual desire to create an experience that was unlike typical RPG games centered around swords, magic, or space themes. But Cultic Games also sought to create a game that was truly Lovecraftian, and not simply a game with those sort of themes. The result of their creative experiment? A trip into madness. 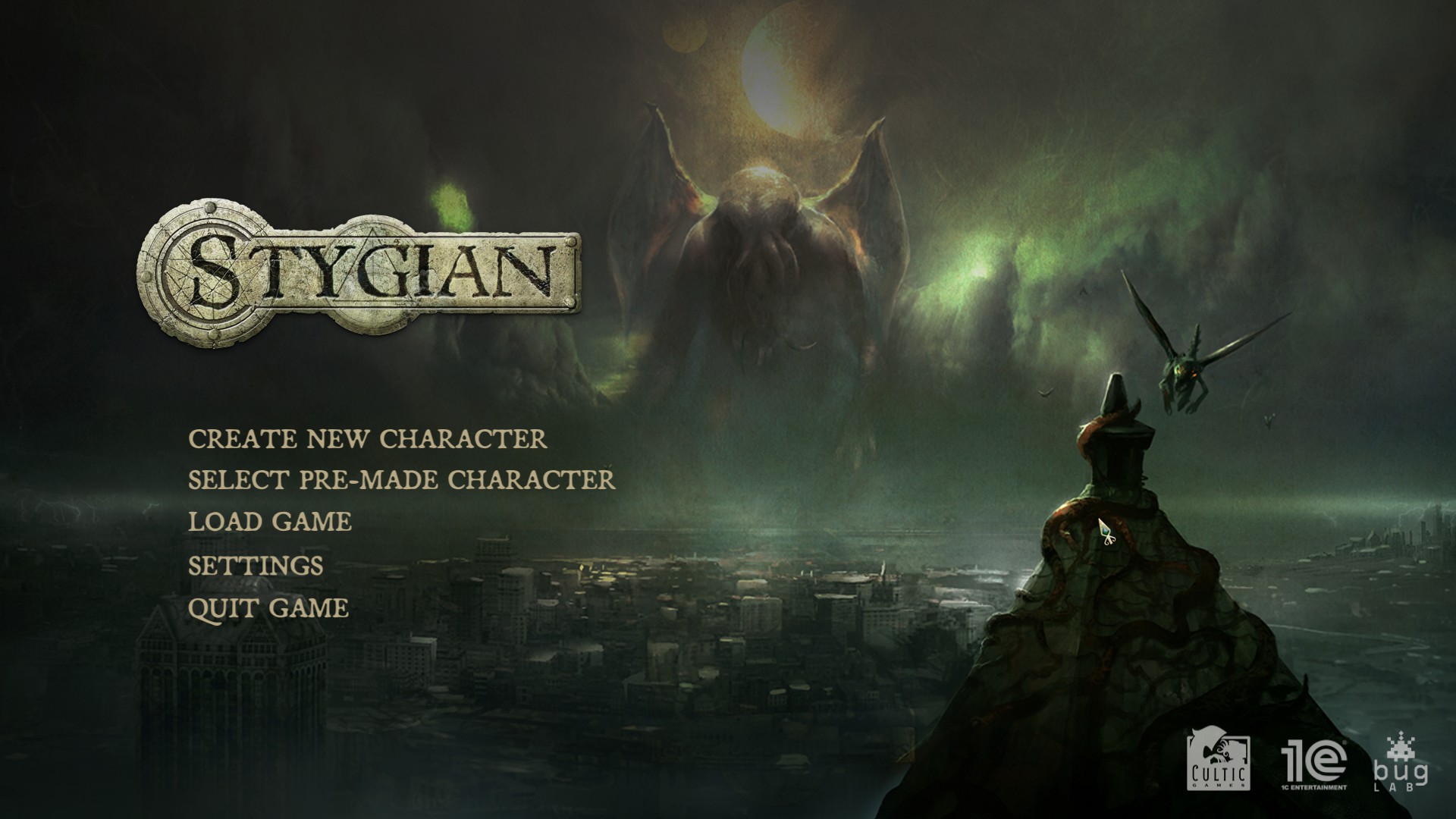 What is reality and what is…madness?

Violence: Stygian includes heavy violence, gore, and graphic scenes. Expect to see bloody messages left behind by dying characters, enemies gushing with gore, and cruel scenes of aggression and violence. Heinous scenes include murders, cannibalism, self-harm, and sacrifices. If you have a sensitive stomach, I do not recommend playing this game. Combat includes the use of weapons such as guns, shivs, and other deadly objects.

Drug Use: The currency in Stygian is cigarettes. Yes, really. They serve as a coping mechanism to aid in retaining sanity in the mad world of Arkham. Along with the use of cigarettes, characters can ingest alcohol at bars or purchase it from vendors. Other drugs can be purchased to give boosts in combat. Non-playable characters are encountered that are suffering from addiction due to substance abuse and will attack you if provoked.

Language: There is heavy use of curse words. The “F” word, Sh*t, D*mn, and every other bad word appear in the game frequently. Expect to see them in almost every dialogue.

Sexual Content: There are prostitutes that will provide the main character with sexual favors for cigarettes. As far as romantic options, both female and male characters can be approached. There are conversation options that can be selected if the player so desires to pursue a romantic relationship, no matter the gender of the NPC. There is no nudity or outright sex scenes in Stygian, but it is implied.

Religious Themes: The very nature of Cthulhu and Lovecraftian themes are heavily religious, as they often have to do with cults. But Stygian delves into religion even more with its option to choose a belief system. Depending on the belief chosen, this is how the player will recover lost sanity. In my playthrough, I chose the “divine” belief system, which is basically the Christian faith. Throughout the game, there were always conversation choices available that, if selected, would restore some of my character’s sanity. These choices often had to do with telling others that I put my faith in God or that everyone needs to continue to trust that God is in control and He has a plan. But some options included my character condemning another character’s immoral behavior and claiming that he himself does not delve in such debauchery. This made me sad, because it gives us Christians a bad image, making us look like judgmental, self-righteous, unloving people who seem to only want to call out the sin in other people.

Vendors sell religious books and items, including crosses, Bibles, and spiritual objects. If your character reads books, it can restore some lost sanity. It was intriguing seeing “Sinners in the Hands of an Angry God” in the mix, which was written by Jonathan Edwards, one of the key preachers during the Great Awakening. 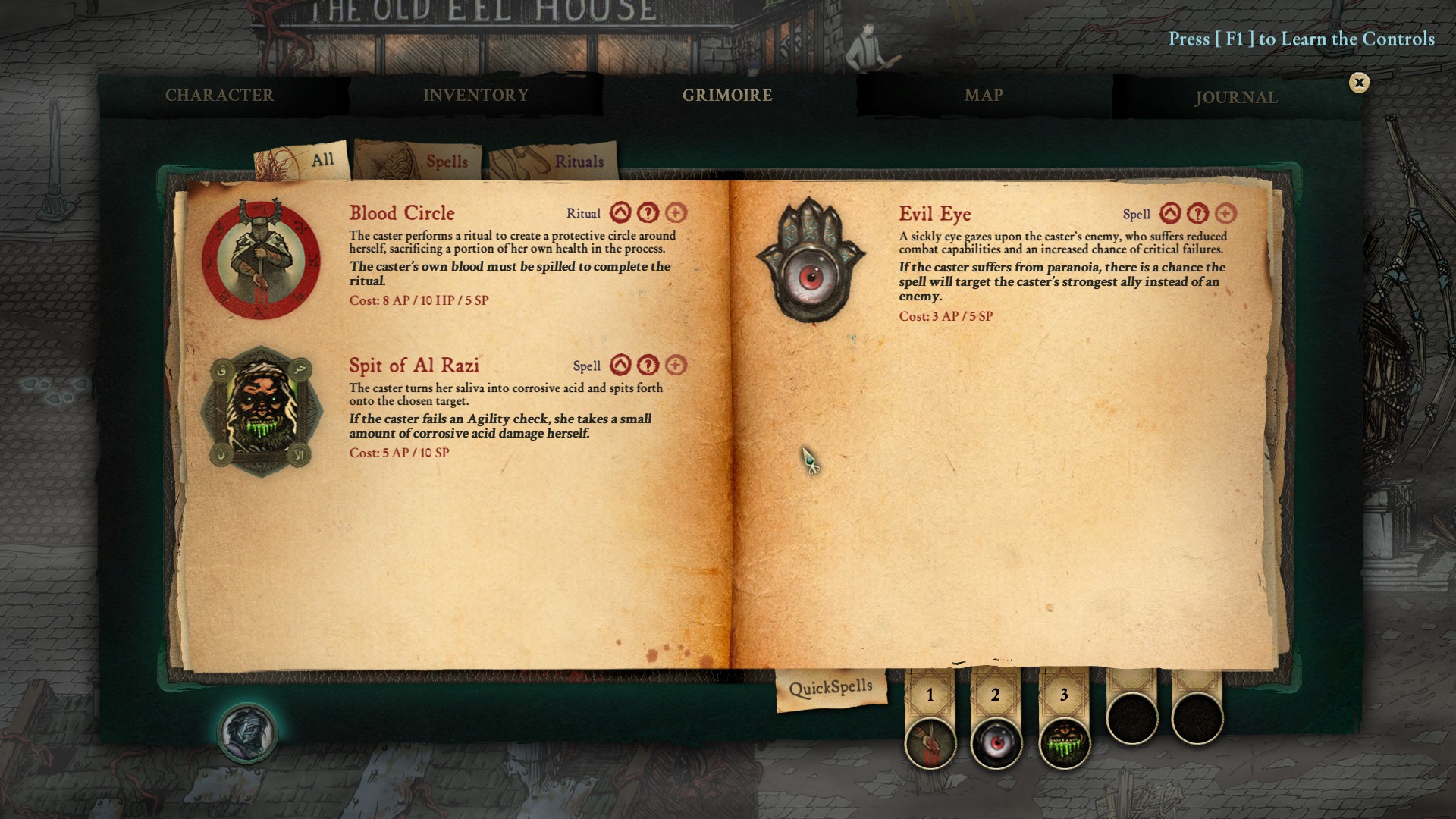 Spiritual Themes: There are plenty of cult activities and magic spells occurring throughout the game. In one instance, the player meets a man who speaks with unseen demons who can attack you on his command. Characters, partners, and enemies can draw blood from themselves to perform rituals and deal damage or provide protection. Some rituals and attacks are graphic in nature and demonic in intent.

Other themes: Madness is the main theme of this game and it can be largely unsettling as the main point of Stygian is to stay alive and remain sane. Once sanity is completely lost, it is game over. Some NPCs cannot take any more craziness and will commit suicide or will go on a murderous rampage.

Stygian is unsettling. Set in a world with little hope for rescue or safety, it is truly a tale of survival and coping with an unwanted reality. The developers have indeed succeeded in developing a Lovecraftian RPG unlike any other. However, I lament that some of Stygian’s mediocre core mechanics encumber its amazing amazing ability to immerse you in its fallen world.

Gameplay includes plenty of survival tactics, as well as exploration and solving mysteries. But the way this game starts off is where it stands out the most. Its character creation bit is intriguing and offers plenty of options. There are several archetypes to choose from, like the Academic or the Investigator. Choosing one of these will dictate your story beginning, flow, and dialogue options. It will also mold your skills according to the theme chosen (e.g. an investigator archetype will yield higher skills in perception and weapon accuracy). I enjoyed perusing the different options and reading through what each one would offer me. Eventually, I chose to be an investigator. 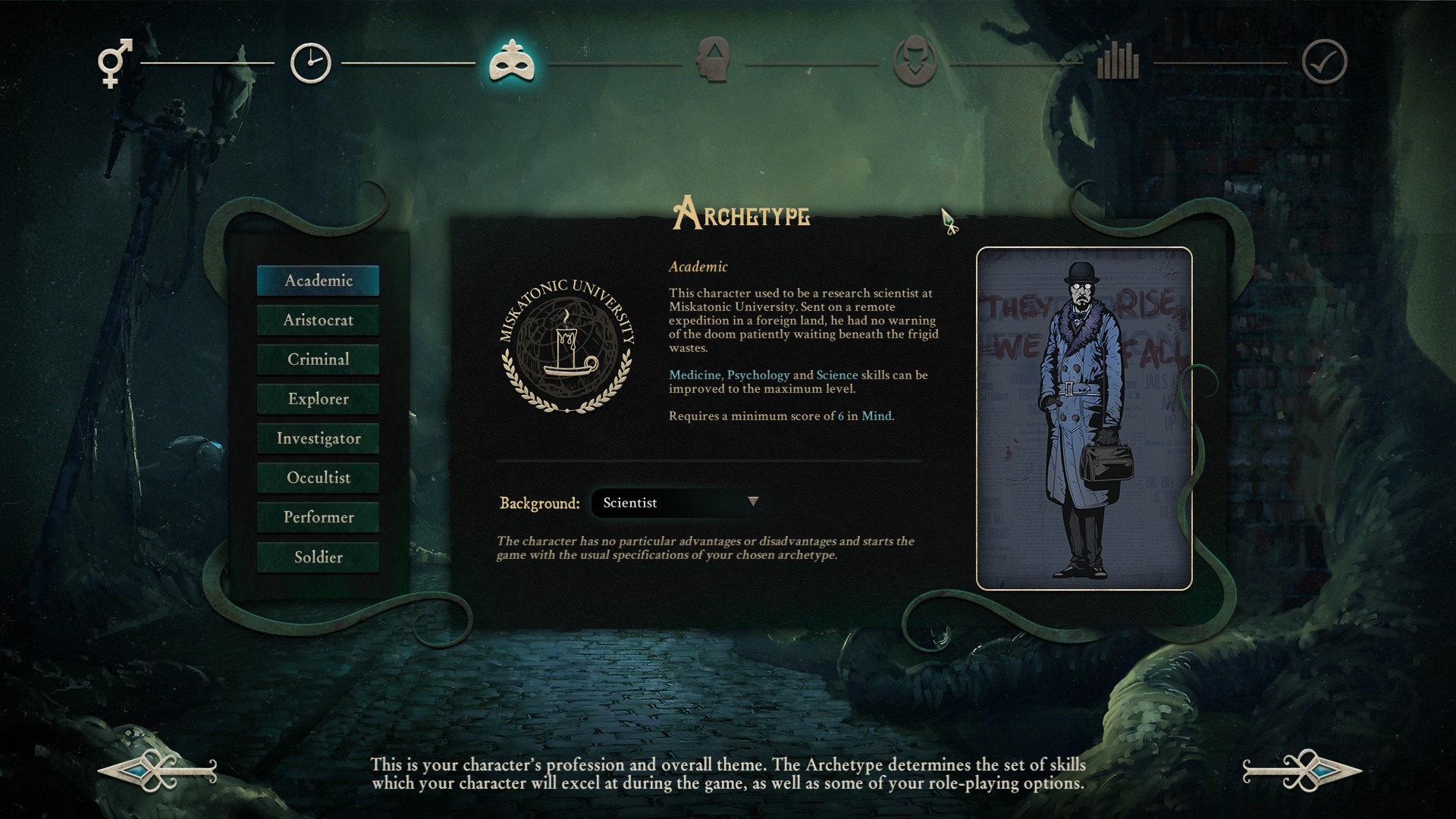 As stated, much of the gameplay has to do with survival and exploration. The player will be forced to contend with hunger, sanity, health, and fatigue. This means that one will need to keep a close eye on their food and medical supplies, as well as having means to restore sanity, as that will inevitably decrease over time.

The environments are open and accessible, but in an artistic, 2D fashion. Players can walk about by pointing and clicking; interactive objects highlight once the mouse hovers over them. The atmosphere is dire and trashy, since the area has become mainly dominated by thieves and manic bystanders. Random encounters could happen, but are avoidable through correct dialogue choices. 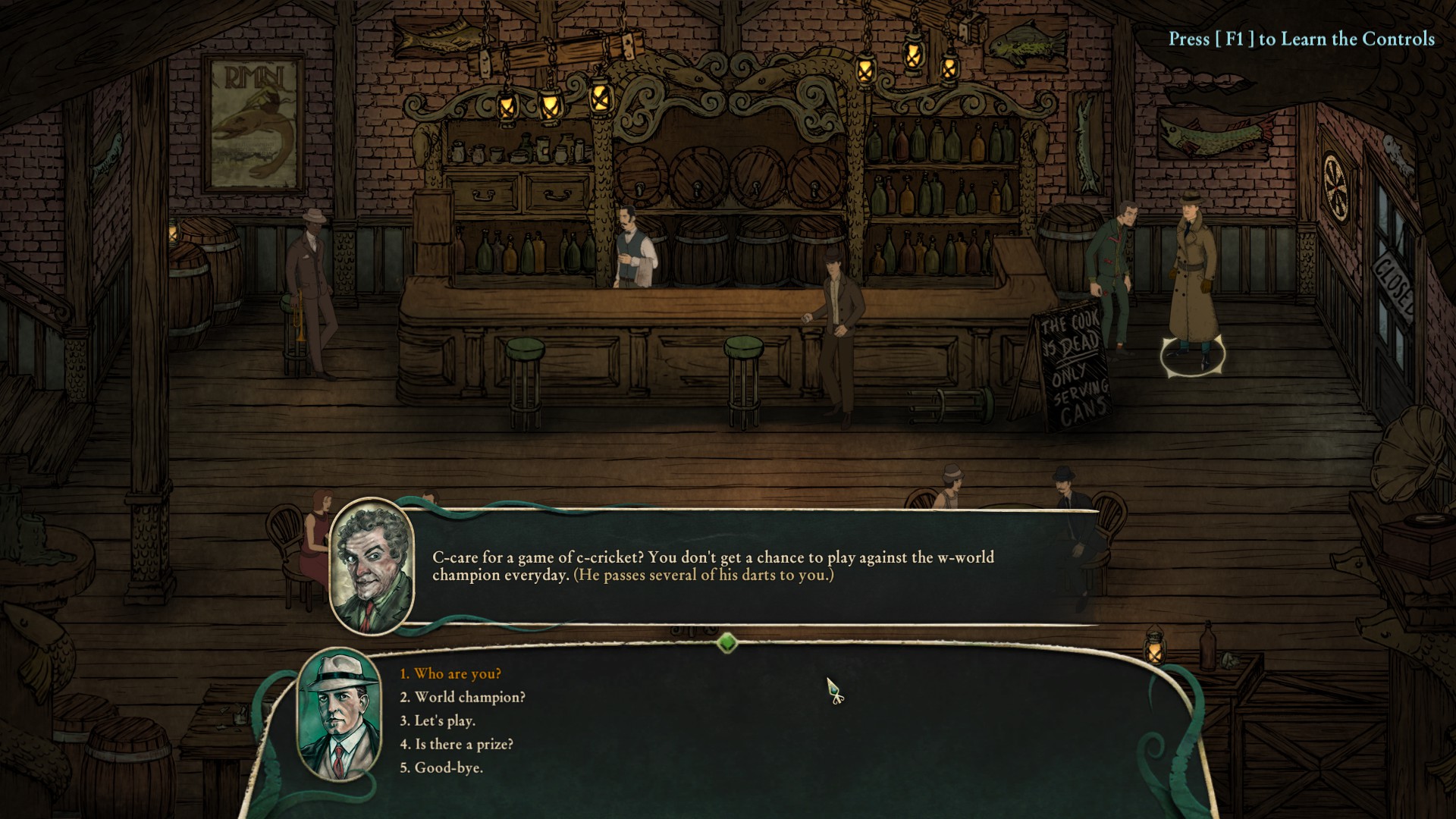 The crafting mechanism is simple, and like many other RPG games, as long as the player has the supplies needed, one simply needs a crafting table and they will be able to craft an item of their choice—granted they have the blueprint for it, of course. Crafting wasn’t of much interest early on in the game, but I imagine it will be more useful later on, as more blueprints become available and items become easier to gather.

Combat is also two-dimensional, contains showy animations, and is all-around rough. I would prefer if combat was easier, in terms of not having to deal with so many factors, such as a loss of sanity, randomly missing an attack, or simply having more action points to use. Similar to a tabletop game, each hero and enemy on the grid has action points to spend. They can be used either to move spaces, attack, or defend. Some attacks use up more points than others. For example, one of my partners, The Outsider, can use up all points to perform a blood ritual to defend himself from all attacks until he moves from that position. At the same time, my character can shoot up to three times if I do not move at all during my turn. 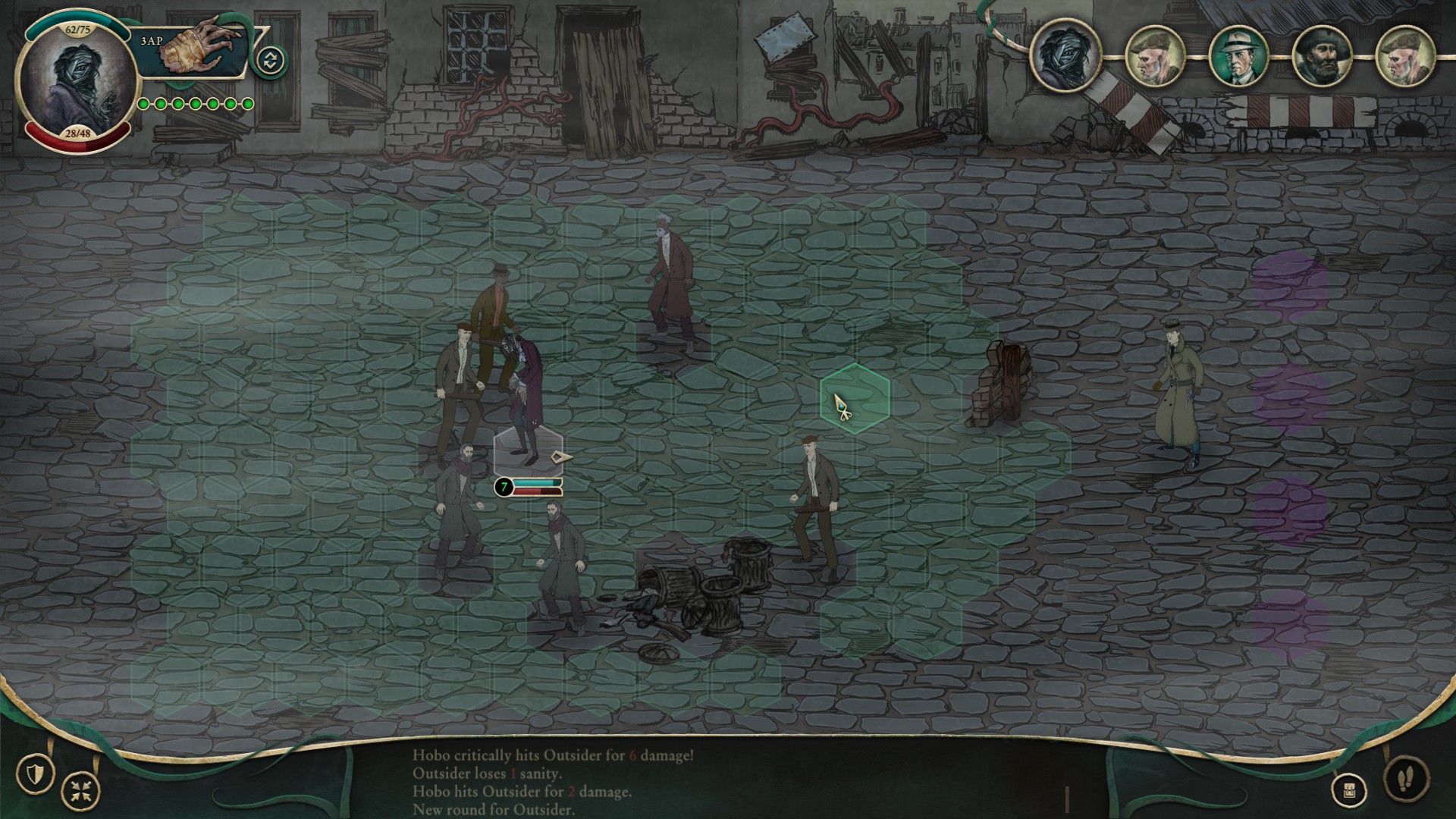 Stygian‘s greatest strength is in its story. Set sometime in the 1920’s, the city of Arkham has become disconnected from the rest of the world; from reality. The setting is intriguing, disparaging, and hopeless, forcing the character to figure out what is happening while questioning what is real and what is simply a hallucination due to a loss of sanity. Over time, as the protagonist plays through the story, certain events will transpire and it will drive them mad. It is up to you to restore your sanity or risk going completely insane. And that’s the challenge: coping in a mad world. Even after playing for a bit, I was thinking about it for a long while after putting the game down. 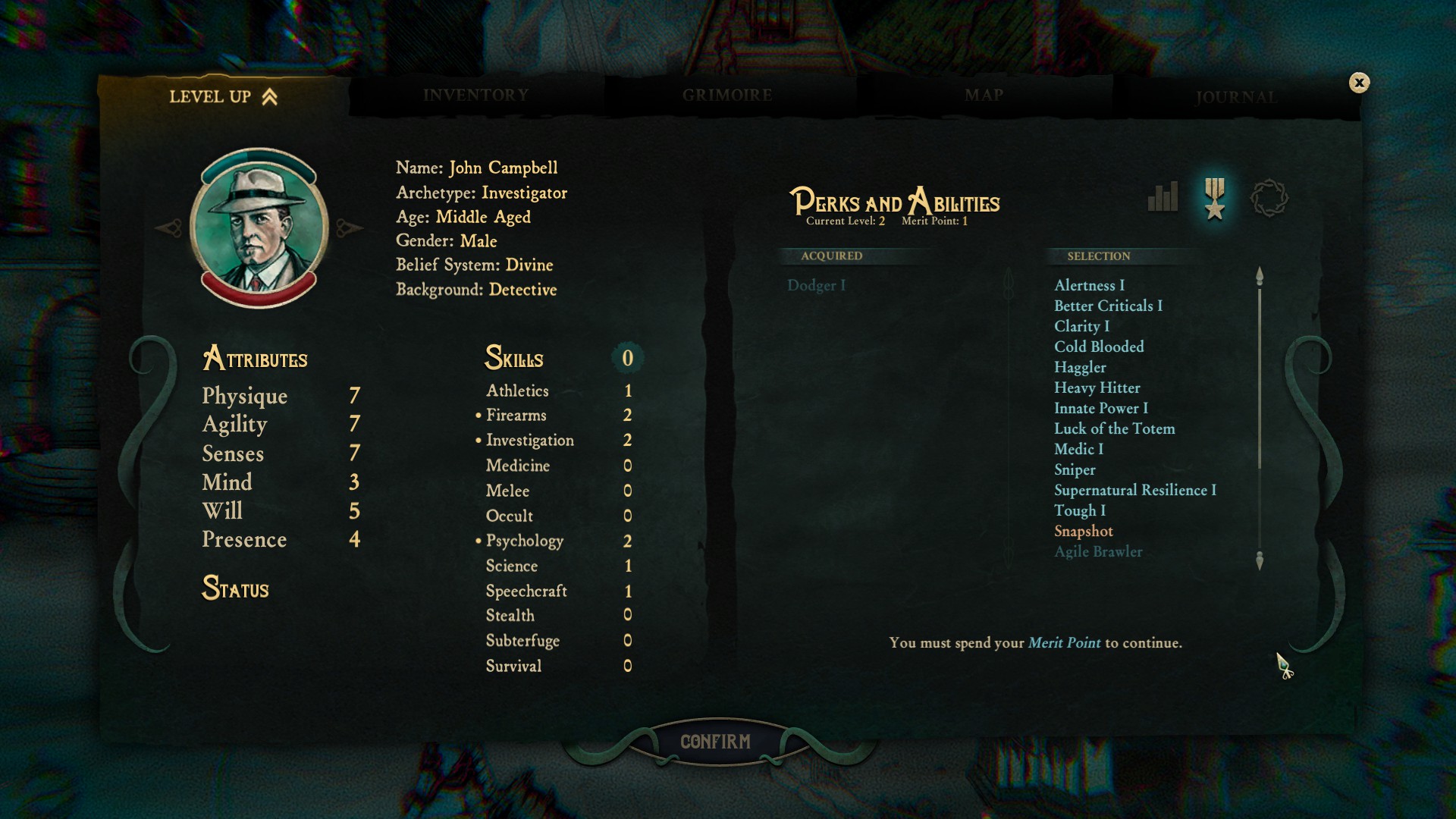 Leveling up is like many other RPGs, adding points to attributes and choosing perks each level gained.

I also appreciate the fact that Stygian‘s story could go in multiple directions, since some missions can be failed and cannot be attempted again, due to a character death or irreversible circumstance. To give an example, one of my partners died, failing one of my missions. Needless to say, I restarted from a save point before their death.

Despite my intrigue in the story, some missions are boring and end up simply being retrieval tasks or approaching a character and having a conversation. But I largely enjoyed some dungeon crawling when I was tasked to find a hidden safe inside of a monster-ridden bank, clues of its location only given through scraps of paper found on enemies. Additionally, I enjoyed the fact that dialogue choices seemed to matter, especially in talking to a woman to convince her to join my party. If I had said the wrong thing, she would have blown me off and that would have been the end of that. 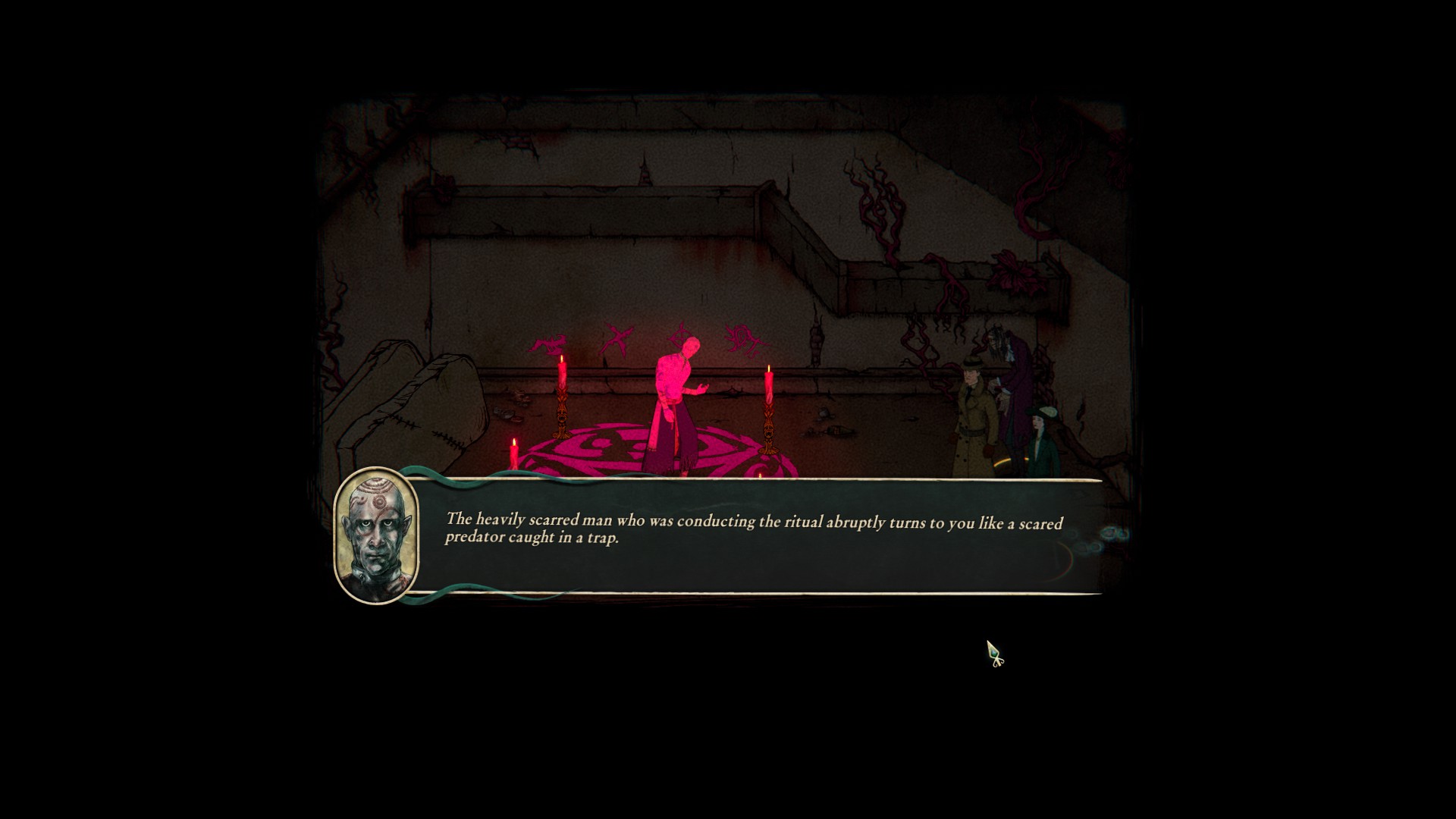 The art and environments in Stygian are creepy, ravaged, and exactly as how I would imagine a 1920’s crazy old city. All of the buildings and models are hand-drawn in skillful, artistic detail and the results are fantastic. My only gripe is with the character models in combat and when walking around; they feel awkwardly puppet-like and cheap. Despite the cool animations, it looks silly seeing arms flail as if they were loosely attached to the torso.

Finally, if the game isn’t unsettling enough, the soundtrack itself magnifies Stygian‘s disturbing tone via its dissonant sharp and flat notes. The world excels at creating uneasiness while also maintaining a factor of intrigue. The Cthulhu tone is captured well.

Stygian is a Lovecraftian RPG unlike any other. Even though its combat is rough and it suffers from common RPG problems (like boring missions), it’s strong story, dialogue, and character creator make it a game worth playing. If you’re a fan of Cthulhu themes, Lovecraftian literature, or creepy games, check Stygian out!