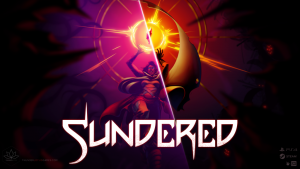 I caught word on the “street” that Jotun was free on Steam as of July 14, 2014 and immediately alerted my team, the Geeks Under Grace video game review staff. It would appear that the occasion for such an event served the purpose of generating hype for developer Thunder Lotus Games’ then soon-to-be-released game, Sundered, an adventure platformer with hand-drawn visuals. If there is any bias I have in my evaluation of video games, I love hand-drawn graphics.

I should also note that Thunder Lotus Games launched a kickstarter for Sundered as of January 2017. Only asking for CA $25,000 for the purpose of polishing the game from its Alpha phase, the developer managed to raise CA $202,102. Seeing Thunder Lotus Games generously provided animated gifs on its kickstarter page to showcase Sundered’s visual quality, I will be borrowing from that page for those who have yet to see them, because they must be seen! 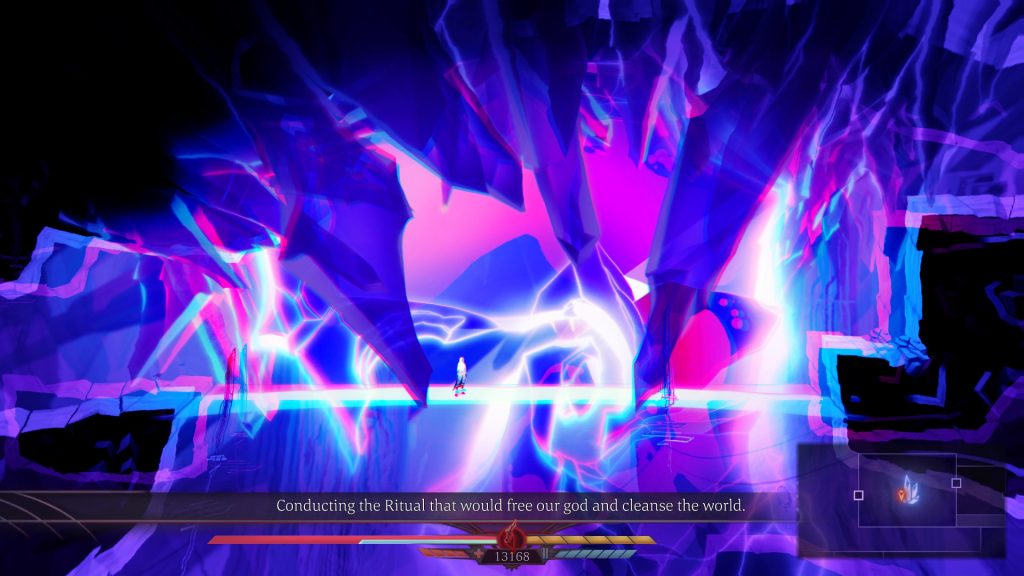 Story elements in Sundered are largely emergent, though some snippets are conveyed by striking amorphous orbs entrapped within the crystals of surreal, warped, caverns. This triggers Shining Trapezohedron’s narrations.

Sundered is rated T for Teen; I find it to be an overall clean game. The screen flashes red when the player-character takes damage while her shields are down to simulate pain. If there is visible blood, it is too subtle to notice. In actuality, those sensitive to the monstrous may be more concerned with the game’s bestiary inspired by Lovecraftian Cthulu mythos. The under-cloaks of seemingly normal anthropomorphic beings reveal dreadful teeth, flinging their entire bodies toward the player in an effort to secure a terrible bite. Another large, elephant-like enemy resembling the Illithids (mind flayers) from Dungeons & Dragons lore (also inspired by Lovecraft) use their tentacles for a “slam” attack. All bosses are similarly grotesque.

Sundered also features some nascent religious themes. By definition of the game’s name, Sundered suggests division; the game expresses this as “light versus dark.” However, though the Valkyries are the “light” faction and the Eschaton are the “dark” faction, Sundered does not reduce either into a dichotomy of light satisfying reason versus the dark ignorance of faith, but balances these influences in a type of perpetual stalemate where Eshe must intervene.

The Circle of Gaming…especially for new CoD players.

For reasons unknown, a woman named Eshe braves a desert sandstorm, walking about a half mile’s distance until she encounters a watchtower. As she passes below its shadow, she is consumed into the ground by…something. After a short platforming tutorial, she descends further into the depths, where an entity identifying itself as the Shining Trapezohedron all but taunts Eshe, yet mercifully bestows upon her some of is power in the form of a incorporeal sword so that she can defend herself. It is then when Sundered leaves me to tend to my business. But first, I have to discover what that is!

All over its promotional material, Sundered markets itself as a metroidvania. While most games self-identify into this sub-genre of adventure platformer, they often evoke more Metroid than (Castle)vania, via reliance on projectile weaponry. In contrast, Sundered’s combat mechanics emulate those of a hack-n-slash, for when enemies appear, and players decide to stand and fight instead of run for their lives, dexterous flurries of 5-hit combos and evasive maneuvers will be required, lest they find themselves staring at Eshe’s skill tree more often than would ever be desired. I find this feature of returning to the beginning room upon death to be very rogue-lite; certainly within this design choice, Rogue Legacy brings its influence to bear. Players will find green orbs as they vanquish foes or smash treasure caches which can be spent to increase skills such as health, damage, armor, and shields, on a menu reminiscent of the FFX sphere grid. Sections of the grid indicated by the large circles can only be unlocked upon the discovery of key power-ups. Spend wisely; every upgrade purchased increases the number of orbs required for the next! 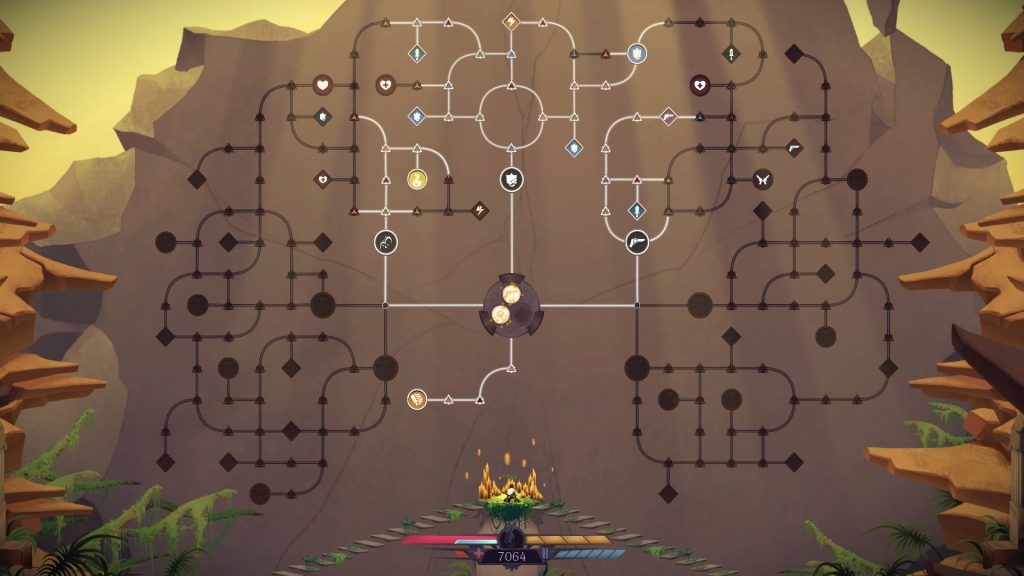 Not going to lie: the FFX sphere grid is still one of the best upgrade systems I have ever encountered in gaming. I am glad to see this derivative.

Some gamers may remember how revolutionary Left 4 Dead‘s Director AI once was; it would place enemies and items on maps based upon numerous variables such as player’s health, ammunition, proximity to teammates, and distance from goal. Sundered adopts this school of thought, randomizing enemy encounters primarily by spawning “hordes.” Players are notified when an attack is coming with a horn-like cue before enemies overrun the screen. Thus, Sundered brilliantly avoids the risk of tedium caused by static enemy encounters, and provides some excitement for multiple playthroughs. Similarly, the game’s map design is procedural. This is best explained with an illustration (click to enlarge):

The left map indicates large rooms and their exits. On the right, one can see that I have made it to the locked room, and the map has filled in the areas that I have traveled through with black. Notice the rooms above the mini-boss (skull) icon, and how one square room can be one, or up to four different rooms.

While I like the idea of procedurally-generated maps, in execution, I find them repetitive, and disappointingly distracting from otherwise gorgeously rendered art. As I explore and unravel the mysteries of this underworld, I begin wondering if I have already trekked through an area as it feels familiar. In reality, it is the game that deceives me rather than my eyes and mind—recycled visual assets strike again!

Recycled visuals they may frequently be, they are some beautiful assets, indeed. Full disclosure (again): I am a sucker for hand-drawn art, and Sundered delivers. Each of the three main areas of the game invigorate distinguished aesthetics: in the first section of the game, Eshe rummages through the remains of the Valkyries and all of their technological prowess, leaving one to wonder how they managed to not survive; in the second section, she slogs through the creep of the Eschaton, where one may be ponder if there are any redeeming qualities to the cult; the final section blends the other two sections as if they were destined to resolve their conflicts in the heavens as if Sundered takes place not underground, but in another dimension, as the toxicity of their war begins to deteriorate everything as denoted in form of toxic clouds.

Sundered rocks a sort of style that a lot of games which they could achieve.

Enemy design parallels the theme of their locations. The Valkyries’ abandoned headquarters hosts synthetic organisms whose relentless aggression matches that of its surface-ignoring armored knights; meanwhile, stationary sentries literally paint the scene red with targeting lasers before they fire from several screens away. The next area is where the Eschaton reside, and the inspiration for their monstrous representation is where Cthulu influence of renown makes its presence known.

Eshe does not live for the swarm.

The procedural nature of the environment combined with the randomness of enemy encounters make for some intense battles, especially when I have been playing for long time and do not want to return, involuntarily, all the way back to the main room. Yet, if players find themselves back at the starting point or stuck, either because they are not strong enough to fight or because they are lost and cannot find the way out, Sundered fancies itself as possessing non-linear qualities. A loading screen not only claims this, but also that “The first three bosses can be defeated in any order.” There are  indeed some elements of the game that are non-linear, but I do not believe that the game is as generous with players carving their own paths as is advertised. For example, “shortcuts” are only accessible once the player has explored and opened the way from the other side. Other paths deter progress by requiring a item acquired later, such as a grappling hook or an air-dash before the can be cleared. Notwithstanding, the most efficient pattern to winning the game is find the section’s two core power-ups to unlock the boss, indicated by the giant illuminated icons on the mini-map.

“Resist or Embrace” is the marquee mantra for Sundered, which is a reference to the choices players will have to make as they accumulate Elder Shards from mini bosses, bosses, and secrets. The Shining Trapezohedron will urge Eshe to embrace the power within them, corrupting the abilities granted by the Valkyrie technology with the power of the eldrich, enhancing said powers at the cost of…well that is a secret, too. Allegedly, corruption makes the game easier, but I chose to resist, for in the innocence of my youth, I relished opportunities to embrace the darker side of things; as an adult am aware of how dark the world is, and now gravitate more toward the light. Besides, the Shining Trapezohedron is pushy, and I do not take to kindly to its tone. Luckily for gamers such as myself, persistence is its own reward. I was able to accumulate enough “experience” through collecting orbs to brute force my way through the final boss. Some really OP perks magnifying my critical damage certainly helped. 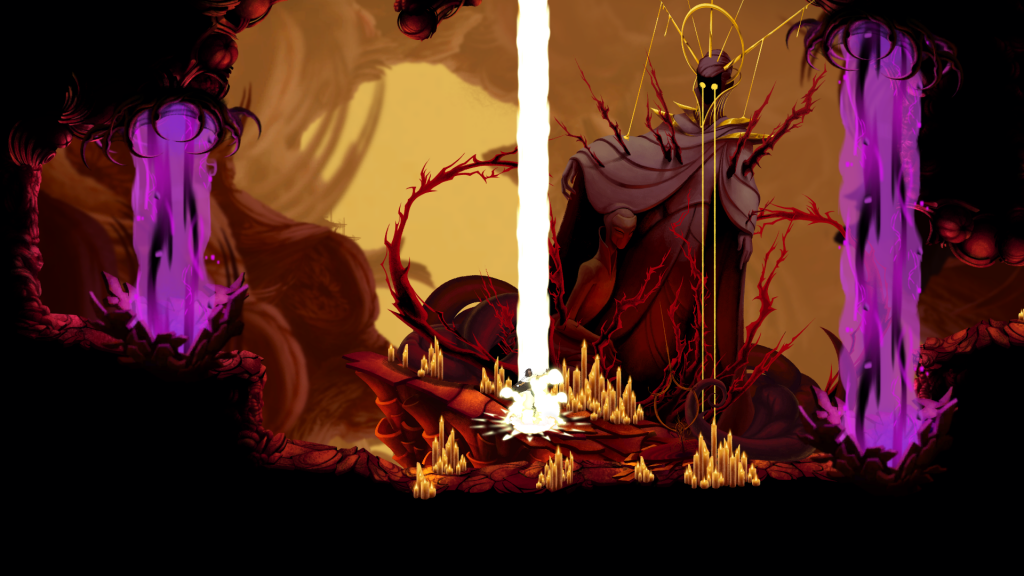 “Your word is a lamp for my feet, a light on my path.”

When gamers hear or read “metrodvania,” nostalgia through the brain overfloweth with memories of fantastic encounters, wonderful exploration, satisfying discoveries, and thrilling combat. Sundered may not necessarily achieve the GOAT status of Castlevania: Symphony of the Night or Super Metroid, but it offers enough wonders, satisfaction, and thrills in its own right.

The scaling in this game is a sight to see, as are the bosses.