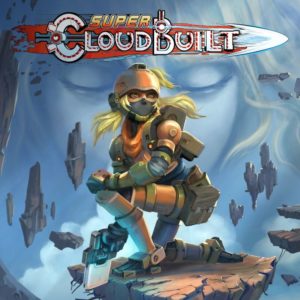 The original version of Coliworks’ Cloudbuilt was published by Rising Star Games in 2014. Met with a mostly favorable reception, I would have considered it to be the centerpiece of the Humble Rising Star Games Bundle the following year. Because of sheer passion for what they do, Coliworks has decided to completely rewrite every line of code to produce the best version of their game possible: Super Cloudbuilt. 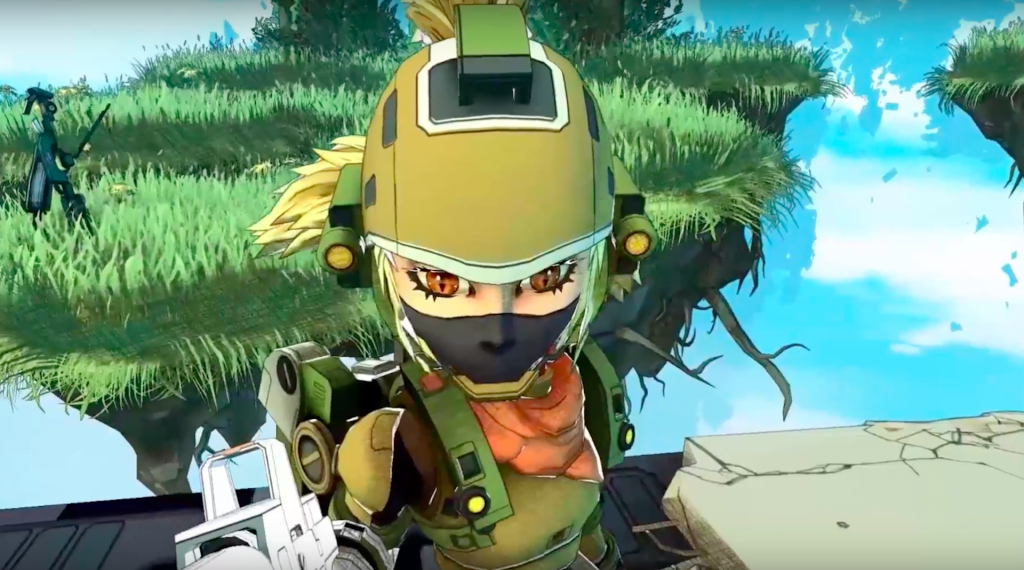 Imagine if Faith from Mirror’s Edge was given a rocket-powered exoskeleton to assist with her agile antics. Demi is the result.

Early in the game, Demi utters a colorful four-letter word that caught me off guard. She is (was?) a soldier, after all, but this swear stands in startling contrast to the bright color palette that Super Cloudbuilt boasts. As a soldier, she is skilled in combat, and acquires early a gun that shoots energy shots. While I did not encounter live enemies, an array of robotic foes will try their best to make players’ lives miserable. I mention this because some of them shoot, and an orange effect appears when a shot lands on any surface, be it a static structure or Demi herself. This is how I discovered that this orange flicker was in fact, not blood.

Instead of wall climbing, Demi can rocket boost up literal towers. Holding down the jump button allows her to cling to a wall like a spider, facilitating precision jumps such as the one onto the ramp in this photo.

One can tell that Coliworks loves their creation that is Demi based upon her design choices. She is fully armored, with no unnecessary emphasis on her secondary sex characteristics with the exception of perhaps her trio of pony tails which “mark” her as feminine with finesse. 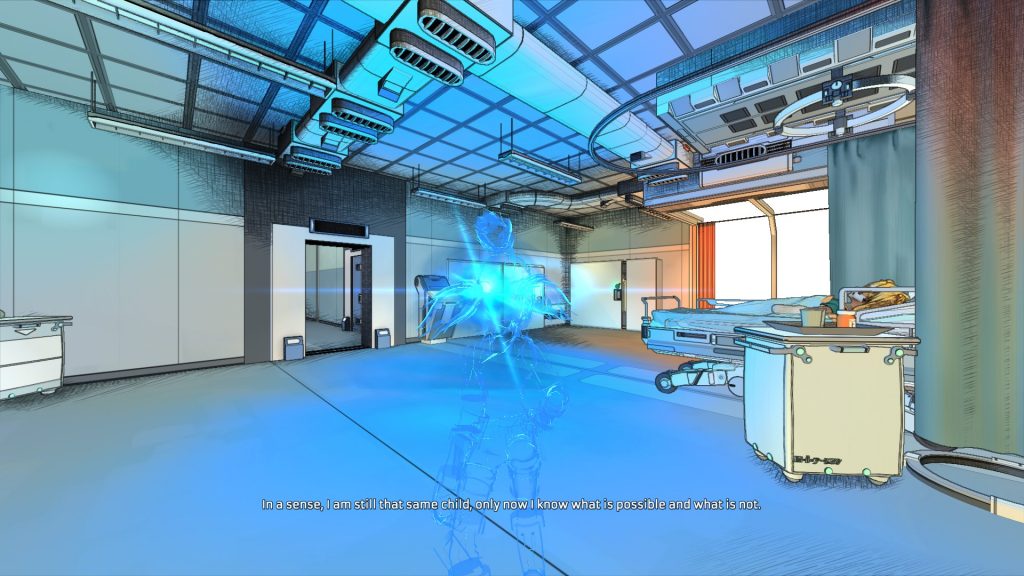 Haruki Murakami-level, the writing is not.

At heart, Super Cloudbuilt is a game designed around speedrunning. Even so, Coliworks attempts to circumscribe the purpose of Demi’s missions with narratives woven so that she can make sense of what has happened to her, for she is comatose, and is experiencing out-of-body hallucinations. After each stage, Demi will offer a few lines of narrative based upon the name of the level completed, as each is labeled with a term, such as “Regrowth,” or “Reflections.” As I indicated with “attempts,” the writing aims for transcendentalism, offering commentary on threat of technology against the organic, or the capacity for a human to overcome the laws of empiricism with via feeling. Despite the names of each level, the lines Demi offers seem non-sequitur; indubitably, the writing itself is more elementary than elevated. I cared for it not, but I did find it novel that stages in the hospital hub world are organized by themes such as pacifism or war. 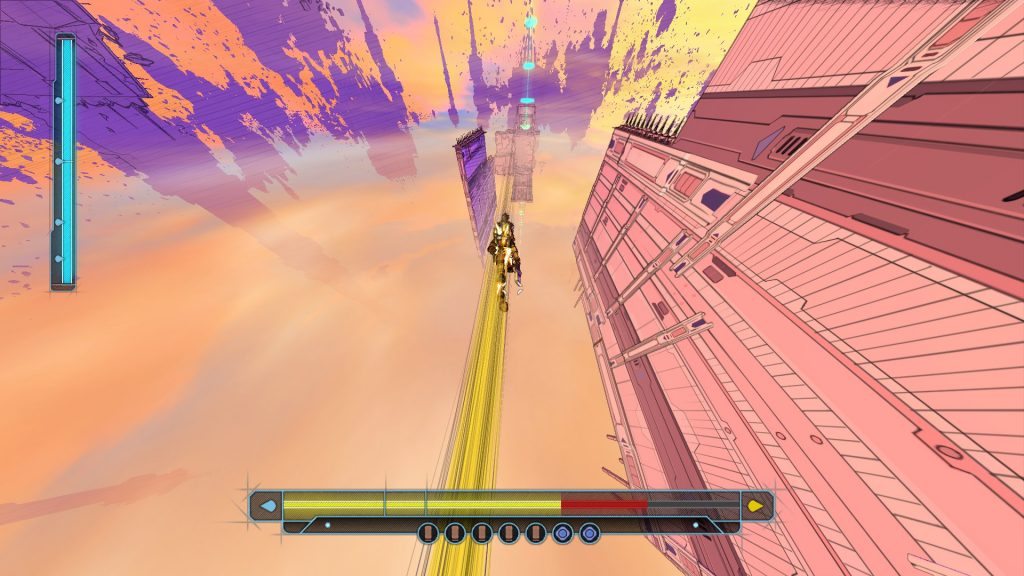 She a Rocket…WO-man! For those like me who want to use a controller instead of M&KB, change settings to “bumper jumper” to place the jump and rocket boost buttons on opposite sides instead of behind each other, making skill jumps like these MUCH easier.

I did not play the original Cloudbuilt, but fans of it can find, straight from the developers’ own words, a list of items that have been changed, here. Those changes are not be all that relevant for newbs such as myself, and I feel that many of them are quality-of-life modifications for fans rather than newcomers. Luckily for us newbs, the premise of the game is simple in concept—so simple in fact, that during my first few hours of play, I was convinced that I would subtitle this review “Super Cloudbuilt? More like Super Boring!” Fortunately, I pressed on, and learned that following through with my initial intentions would have been imprecise. 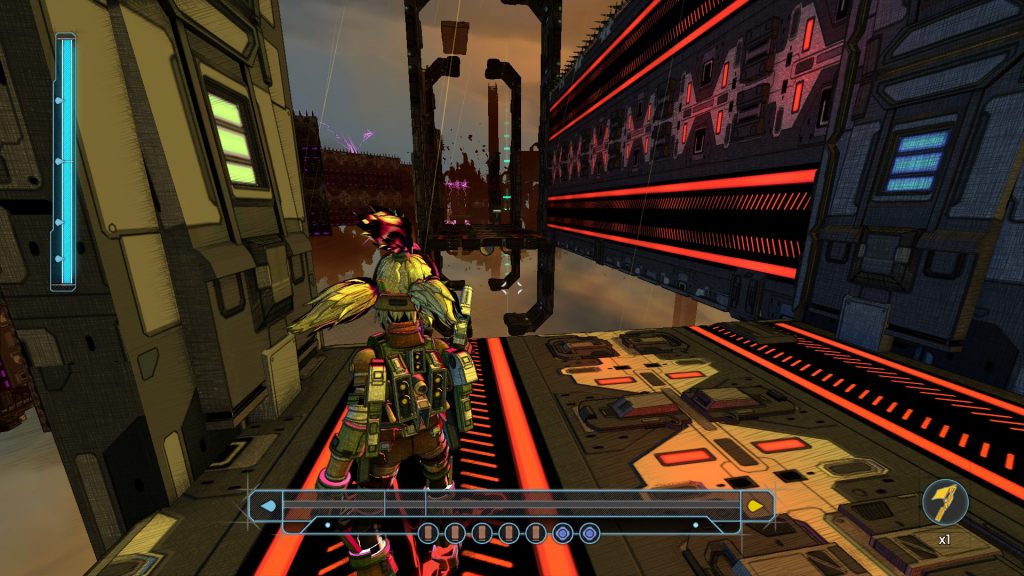 Certain “zones” power down Demi’s exosuit. Here, one must gain enough momentum before jumping and attempting the wall run so that she can make it to the other side without falling. This jump (and the one after it in the distance) took me five minutes to master.

Stage difficulty in Super Cloudbuilt is indicated by ascending numericals beginning with “1.” After the completion of a mission, the hospital corridors expand, allowing the selection of a stage of higher difficulty in one of many branches: Elm, Aspen, Willow, Maple, Ash, Oak, Hawthorn, all of which are named after trees. That’stheJoke.gif: tree branch, hospital branch, story branch. Well, what I discovered in all this is that Super Cloudbuilt is non-linear, allowing players to explore and play multiple branches at once. My boredom was caused by me playing “1-3” difficulty stages repeatedly, even if they were on different branches. I did not understand why some stages contained enemies, and others did not, or why the scenery or music was so drastically different if I chose a mission from a different branch. As I began to play missions with difficulties of “4” and above, boredom and disinterest transitioned into novelty  and frustration, for I began to play the missions of substance in Super Cloudbuilt. The training wheels are removed.

Assuredly, Super Cloudbuilt looks and sounds better in motion. To put things into perspective, I finish this level in about five minutes.

Furthermore, I discovered that if Demi were interacting with real people instead of her own imaginative dreamscape, these hospital branches may include but not be limited to psychology, physical rehabilitation, holistic medicine, and prosthesis. Each leads Demi to draw different conclusions as to how she should move forward upon recovery of her injuries. Some provide a positive outlook; others are dark. Still, the ending sequences are barely distinguishable. 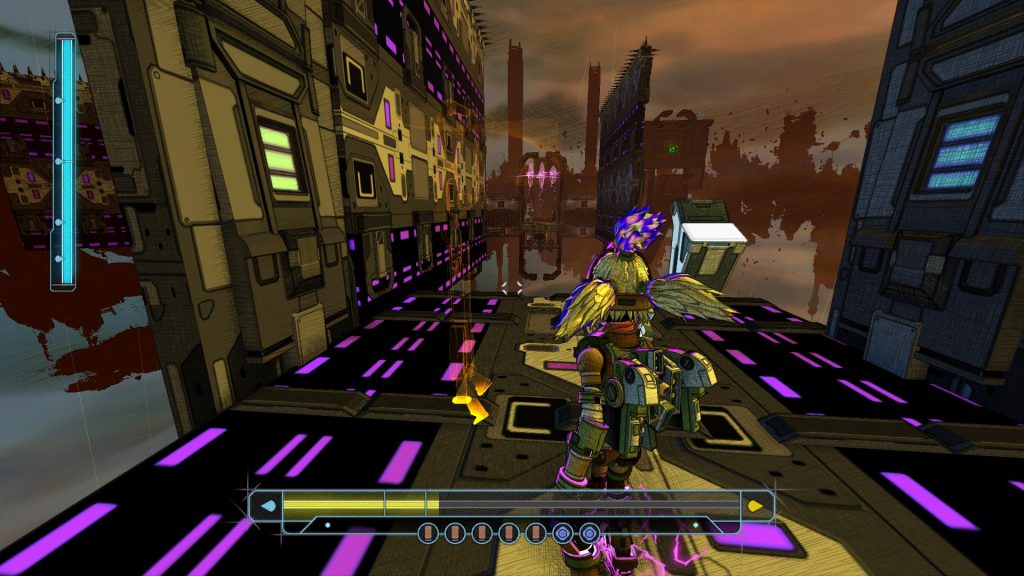 In this situation, the purple nodes reduce rocket power, forcing players to use boosting on a limited basis while crossing, which is even harder than the no-rocket jumps I showed earlier. This one took me 15-20 minutes of tries to clear. Note the translucent yellow flag in front of Demi. Be sure to collect and use portable checkpoints or suffer the consequence of starting over from far away.

In terms of  how Super Cloudbuilt is actually played, as is the objective of any speedrunning game, one must help Demi go from point A to point B. For those who are not interested in haulin’ you-know-what at breakneck speed, there are secret items that can be found while taking things slow(er) and exploring, such as the life key, or A, B, C, D microchips. Barely scraping through a level grants an extra life, which stacks; the prize for simply finishing a level and finding the life key equals +2 lives; the microchips unlock a power-up such as enhanced weapons or my personal favorite, slow-motion that can be triggered on or off. After completing a level, challenges open up, such as pacifist runs through hostile territory or clearing a stage without exceeding a certain threshold of energy from boosting. Completing these grant more extra lives and power-ups. 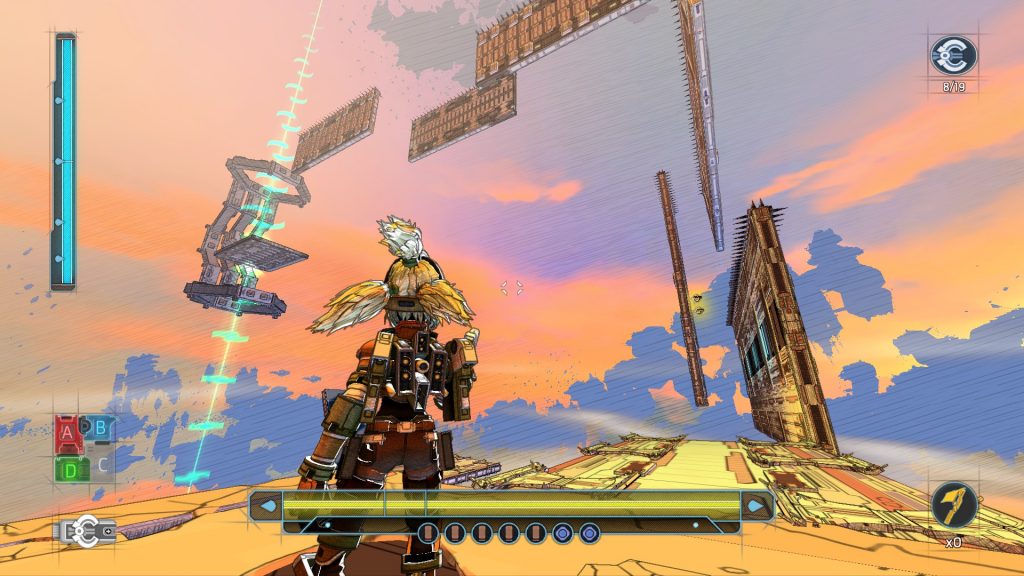 Playing Super Cloudbuilt like a collect-a-thon may scratch the classic platforming itch, but pursuing that route is far too stressful for my tastes, oftentimes requiring uncanny feats of agility to nab an item and reach or plant a checkpoint before a failed jump or badguy knocks off Demi. My playthrough was far more concerned with solving the platforming puzzles, sometimes exploring multiple routes and finding multiple solutions to said obstacles. I tried my best to adhere to the rule that the shortest distance between two points is a straight line. In all circumstances, this game will cause gamers to contract a case of sweaty gamer hands, the likes of which that have not been seen since the days of lategame Mario 3. 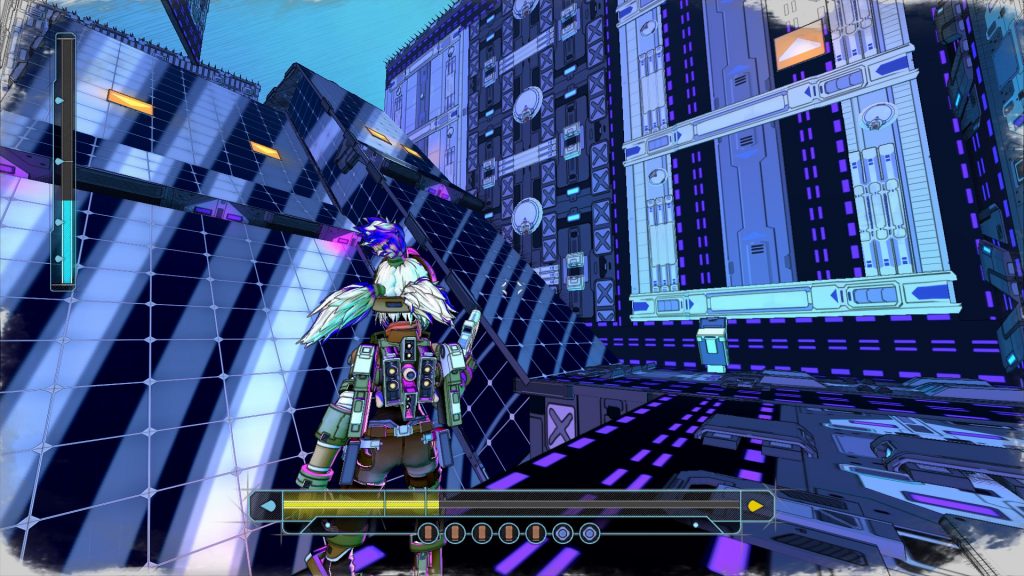 I think I was somehow supposed to boost up the ramp into a wall run then jump to the other side. I could never figure it out.

My efforts to conquer Super Cloudbuilt were not always successful. My progression on at least one branch (Maple, if I remember correctly) came to a halt when I encountered a puzzle that I could not figure out. The combination of slick ramps neutralizing Demi’s traction and nodes limiting her the energy of her exosuit rendered that section seemingly impossible. There are parts of the game that I failed due to lack of skill; this particular puzzle failed me as I did not feel I was given adequate training or clues to clear it. The probability that other gamers will experience similar encounters is low, at least. 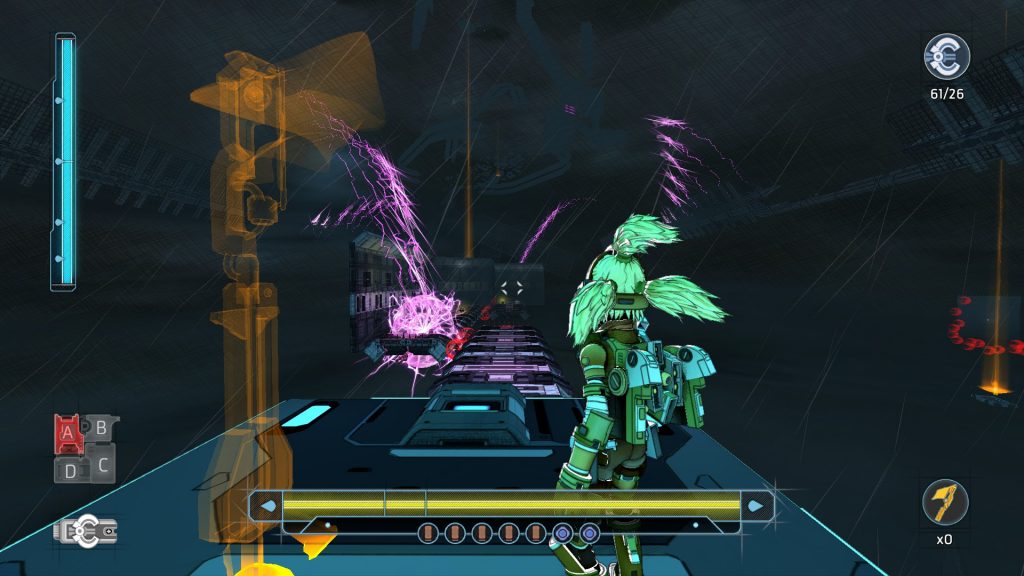 The name of this level is “Desire,” and its difficulty is denoted by a double-Lives are boosted (see top right) due to its sheer difficulty. Pros can clear this in under two minutes, but I spent a good hour and still could not do it. #GamerGoals

While I feel still feel strongly about the pacing in the first portion of the game, and the nebulousness of the narrative in between missions, Super Cloudbuilt began to redeem itself by making me feel like I was accomplishing the seemingly impossible. I do wish that there were less hand cramp-causing stages requiring precision wall runs and jumps, and more stages like “Implications,” featuring ramps everywhere like a modern Sonic stage so that someone such as myself can feel like I am good at the game. The inclusion of an easy/unlimited booster energy mode would also expand the game’s accessibility. Instead, it naturally goes into the other direction with hard competitive modes such as Time Attack.  Super Cloudbuilt might be a pure speedrunner’s choice, but for gamers such as myself, I am pre privy to something like Vanquish, a game also featuring a rocket-boosting exosuit with more action. 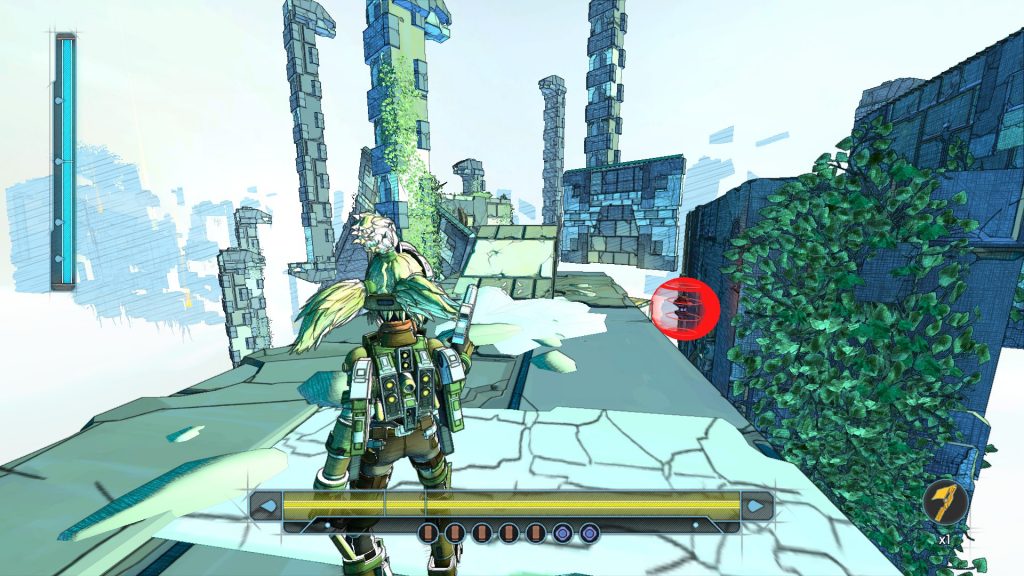 The stage named “Implications” is the only stage that put a smile on my face. Ramps are everywhere, and platforms are placed to give players a BOOST of confidence. The difficulty of “5” makes no sense to me as it felt like a very fun “1.” More stages like this one, please.