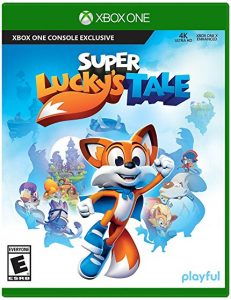 I am here today to answer an ancient riddle sung by our forefathers. “What did the fox say?” Well, in playing Super Lucky’s Tale I have found the answer. Lucky usually replies with “Cool,” “Whoa,” and “Come on.” This cheery adventure has more to offer however than simply answering the lyrics of a hit song. Let’s jump into the review of Super Lucky’s Tale by Playful Corp!

Super Lucky’s Tale is rated E for Everyone, and as such is devoid of any major and even minor offensive content. When you defeat your enemies, they generally disappear in a poof of smoke. Dialogue is non-existent and the talk balloons enemies use to speak are not even very threatening of Lucky. This game is clean and perfect for anyone. 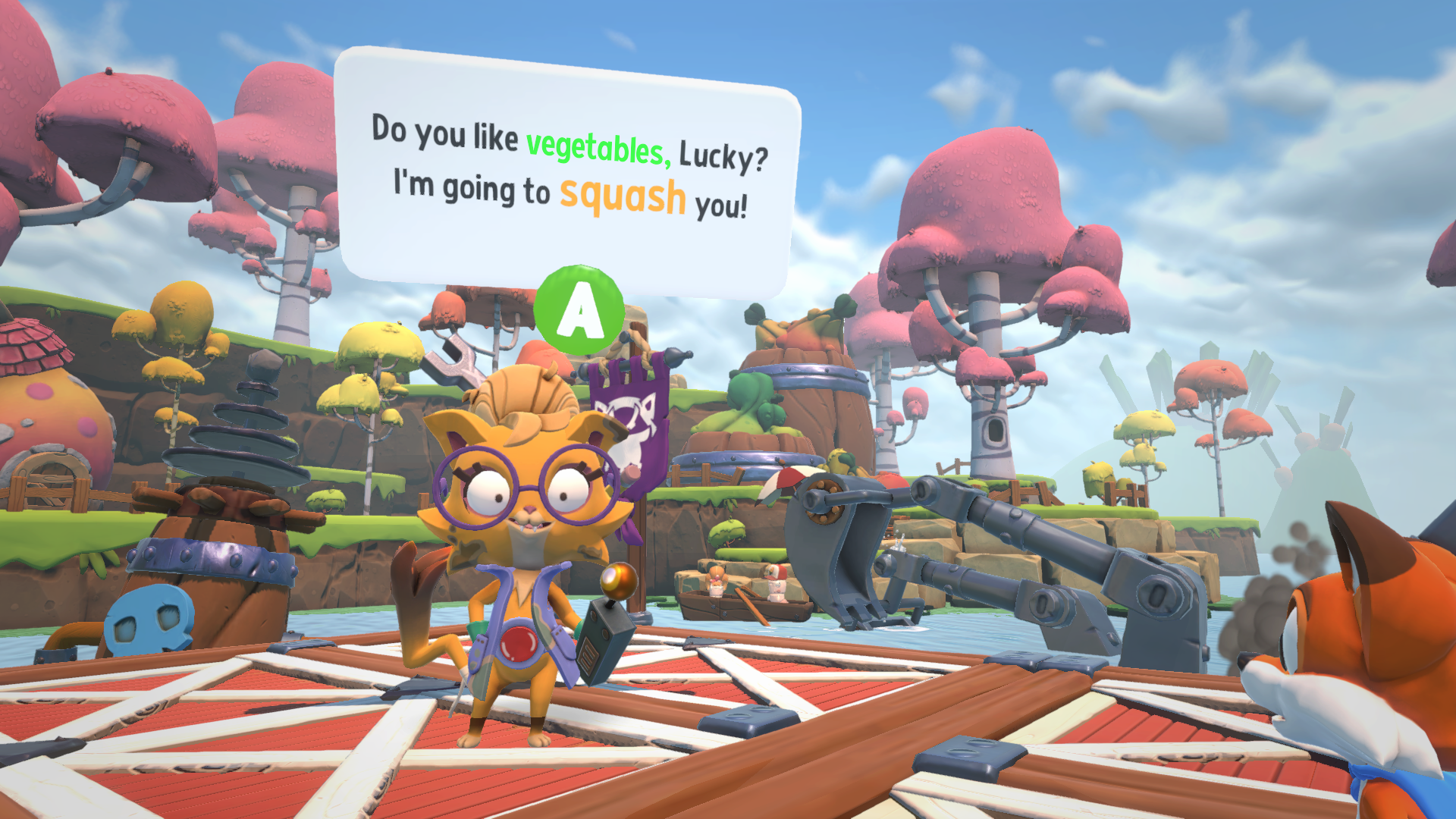 Mommy always said not to play with your vegetable puns.

So as mentioned earlier, it is less in what the fox says and more in what he does. Lucky is a young mammal in a family of adventurers known as Guardians. His sister Lyra is on the way home with the Book of Ages, which holds the ability to visit strange new worlds and even alter history. The problem? The evil Jinx and his fiendish group known as the Kitty Litter want control of it.

The Kitty Litter follow Lyra back home and advance in order to take the Book of Ages, but it has other ideas. It opens, sucking the Kitty Litter inside. Lucky moves quickly and pushes his sister out of the way, but sacrifices himself in the process. Our enterprise begins as Lucky exits into a new chapter of becoming a Guardian. 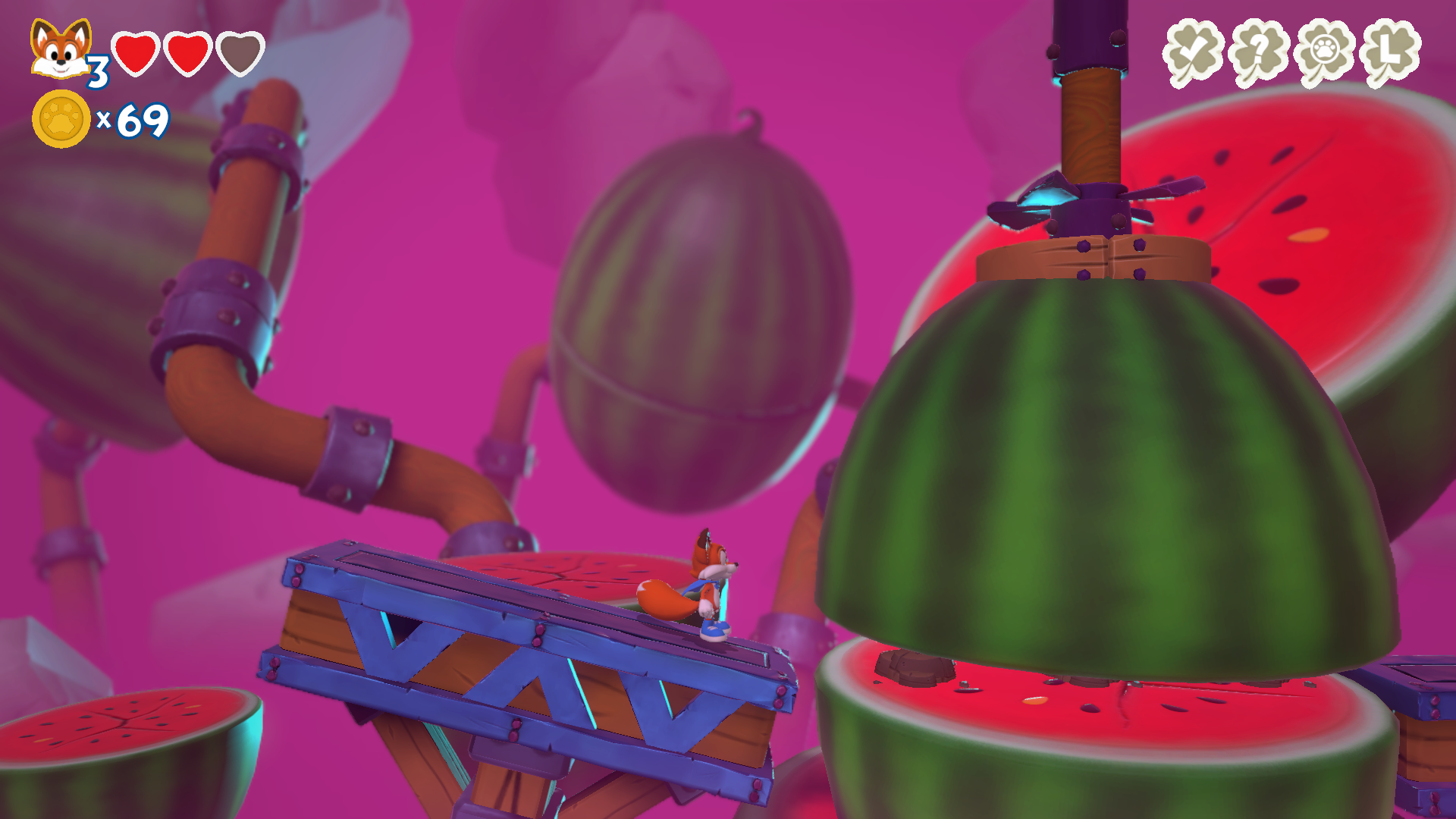 Being stuck inside a watermelon does not sound like a bad thing.

Super Lucky’s Tale is a great little platformer in a year loaded with them. Yooka-Laylee was much more heralded coming into the year, and Crash Bandicoot N-Sane Trilogy has the pedigree to sell millions of copies. But even so, the charm of Super Lucky’s Tale captures my interest.

The gameplay is simple, just as a platformer should be. You jump, spin to swat with your tail, and bounce off of enemies to defeat them. While I enjoy innovations, it is nice to play a game that does not think it has to reinvent the wheel. To a degree, Super Lucky’s Tale reminds me of the Spyro series in the way Lucky moves and the way the levels are designed.

The cutesy graphics do Super Lucky’s Tale plenty of justice. The color palette feels fresh and vibrant. There are a few rough edges to some of the designs, but Super Lucky’s Tale is not going for realism and does not have to. It succeeds in what it is trying to do, which is appealing to platforming fans and seekers of nostalgia. 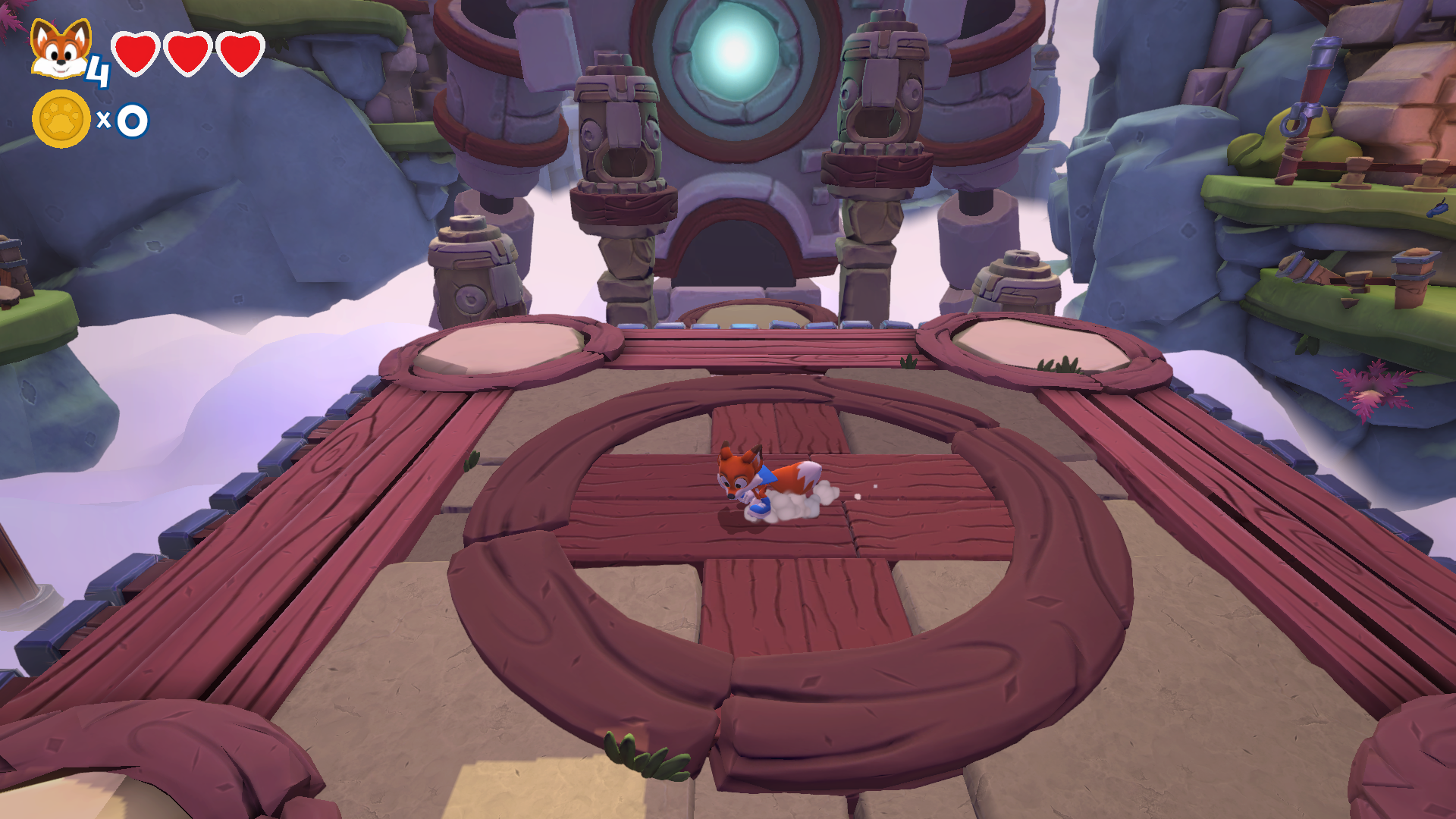 Round and round the Lucky goes, where he ends up David knows!

There are four hub worlds in total, with about four to six levels to play in each and a final boss at the end of each one. The real story is in the diversity of the levels. Each comes with a new idea, and there is a wonderful mix of 2D levels as well. The 2D levels may be the better of the two, because the design of the mostly fixed camera is lacking. Some levels drive me completely insane, such as the timed platform levels in Holiday Canyon. In these, a floor may flip from one area to the other, and if you do not time things right, you will fall right to your death. I can definitely say grimacing is now part of my repertoire due to these stages.

Your main goal is to gather clovers to unlock the doors to the bosses. While it is not a must to gather every one of them in completing the game, the challenge of it is fun and not as much of a chore as I originally thought. The only issue I have is there is never an explanation as to how you get each levels clovers. I made it through most of the game before realizing collecting 300 coins gained one of each levels four clovers. If you complete a hidden objective, find all the letters of the word “Lucky” strewn throughout the stage, and finish it you can earn the final three clovers. 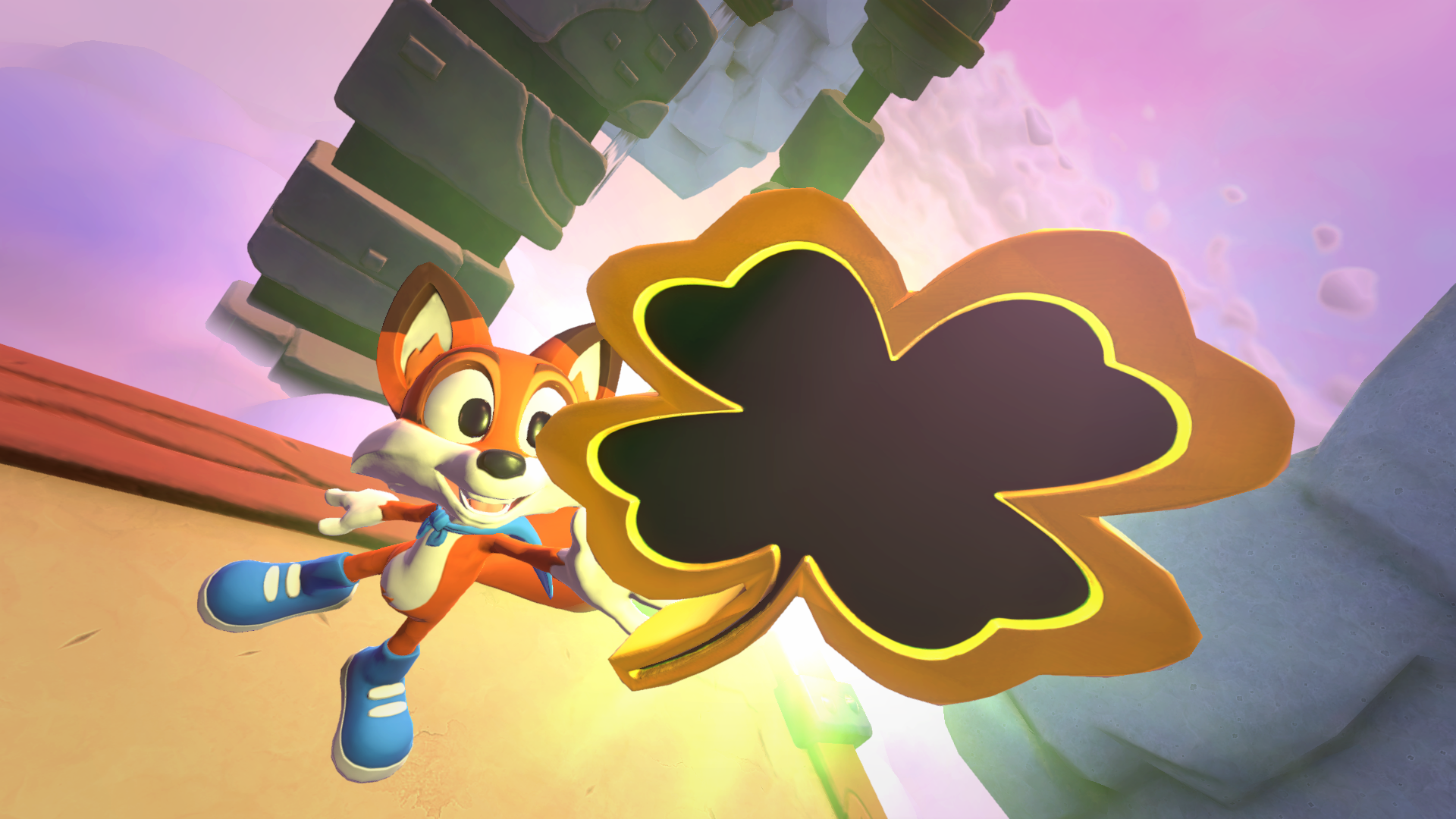 Lucky…. clover…oooooooooohhhhh I get it!

An additional issue lies in the design. If you miss an objective that has a time limit for a clover, you have to play the level over to complete it. In this day and age, a restart function needs to be mandatory. Otherwise, the gamer gets frustrated over having to repeat a level they already have beaten. A redeeming quality is in the tracking system; the platform in front of each stage’s door has markers on it to let you know what clovers are missing from your collection.

My favorite part of the game is the challenges. There are mini-games involving puzzles or endless runners that are tons of fun. The brain teasers comprise of statues that Lucky must move into specific positions. They will move all the way to the end of each row, so your attention to detail is a must if you want the reward of an extra clover. The endless runner levels are almost too simple, as surviving to the end of each level is all you have to do. 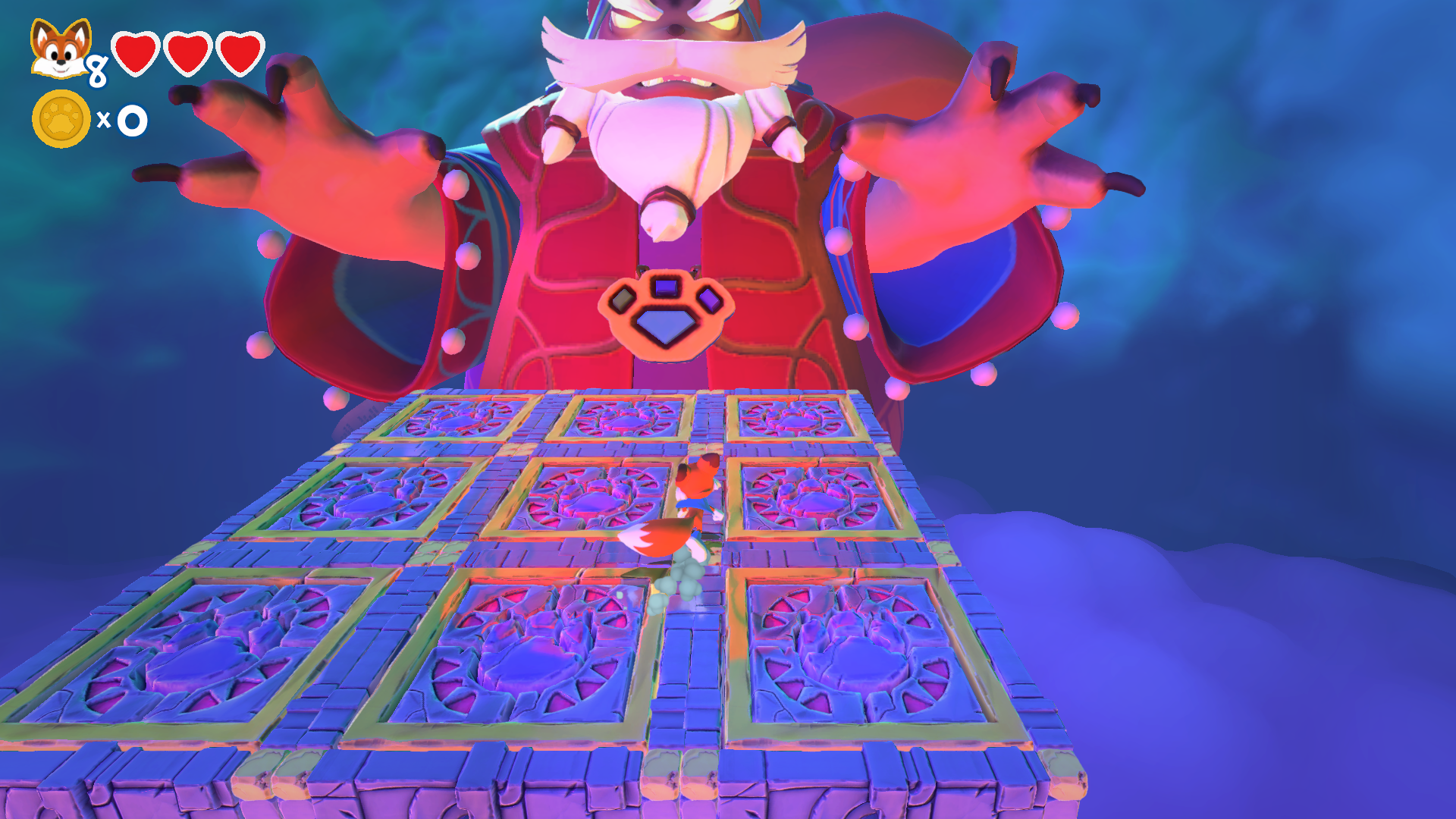 This boss fight is fantastic, but also frustrating.

This leads us to the difficulty of the game, which is all over the place. Some levels are easy to finish, and others bring death with them to the tune of ten lost lives. The boss fights also share in this. The first three are unspectacular, even plain, but the final boss is a nightmare. It took this reviewer putting down the controller for a day in order to defeat Jinx. While Jinx is a pain in the butt, the level design here is nothing short of fantastic.

Super Lucky’s Tale is a fun platformer. It may not break all the norms, but it succeeds in crafting an entertaining experience. I do have some problems with the difficulty and lack of information (as in, making you figure out how to play the game and objectives), but that is not enough to say it is not worth playing. Super Lucky’s Tale is enjoyable, which is more than I can say of Ylvis’s “The Fox.” Now if you will excuse me, I need to listen to something to get this out of my head. 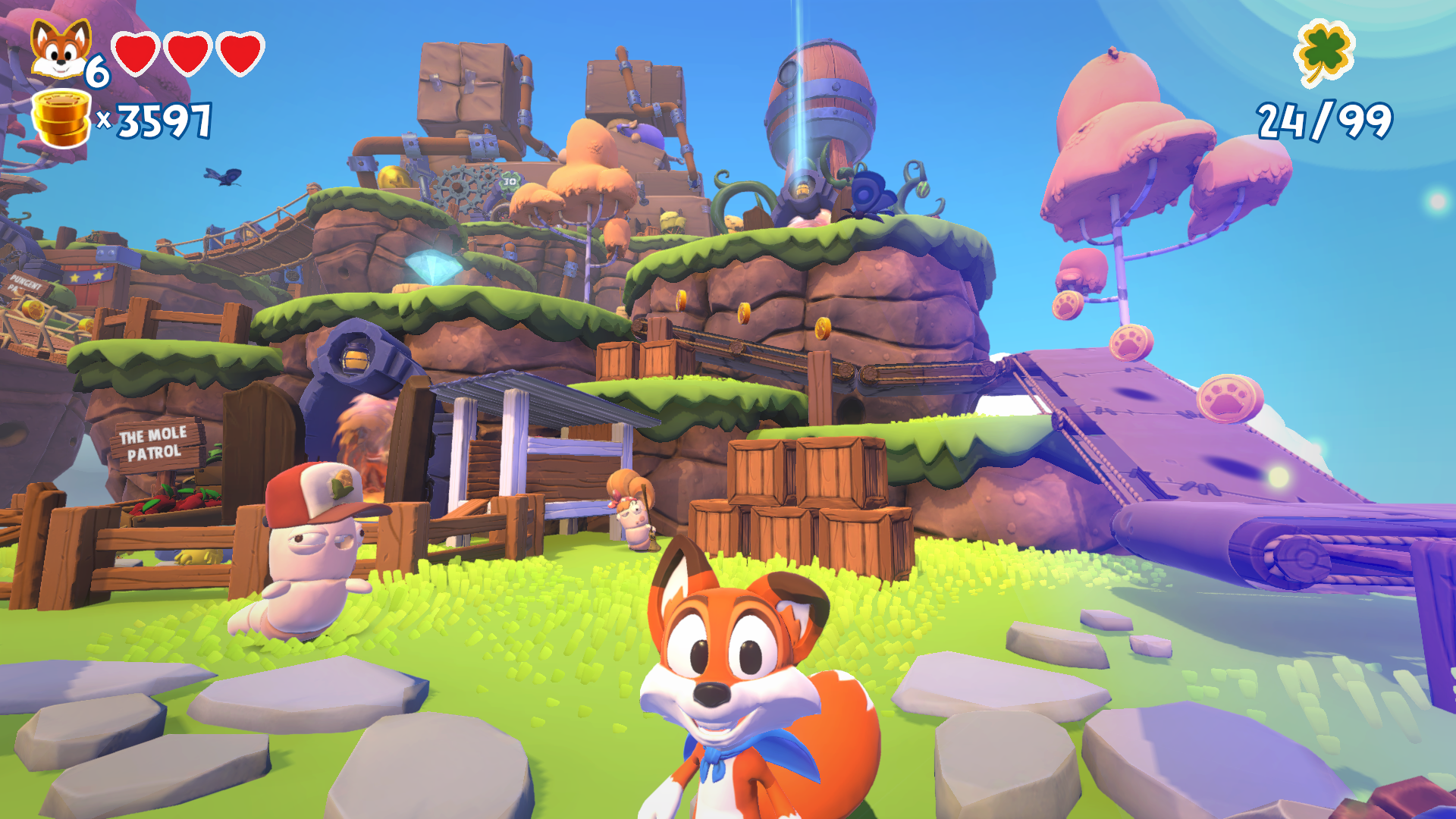 Just a good screenshot of our young Guardian.

Super Lucky’s Tale might not reach the heights of Super Mario Odyssey, but it is still a wonderful experience. With Microsoft lacking exclusives, Super Lucky’s Tale is a good place to begin a new era of Xbox-only games.