I vividly remember this type of game. I’ve played the other version (which was Super Stardust HD) when it was offered as one of the free games given out by Sony after the hack on PSN a couple of years ago. Naturally, I expected some improvements—like different planets, mechanics, and also upgrades to your ship when you progress through the planets. I also thought that this game would be a lot easier, because the previous version was difficult for me. I also hoped that they would make a co-op mode where you could plug in a second controller and play with someone else locally.

There is some mild fantasy—enemies can be aliens or ships. There is violence in this game because you’re supposed to shoot rocks, spaceships, and other stuff when you’re on the planets. Other than that I’d say it’s safe for kids to play this game.

There isn’t really a storyline in this game; it’s more of an arcade shooter game. You just pick up the controller and, right away, get into the action of clearing planets and defeating the enemies. A storyline would be nice in the future, though.

This game is somewhat similar to the previous Super Stardust HD. You have to clear a planet of certain substances—like rocks, ice, and gold. In the process of getting rid of those substances, you also have to get rid of aliens or bombs. To clear a planet you must go through five phases, and then you unlock the next planet. There is a boss once you get to the fifth phase that you have to defeat in order to clear the planet. 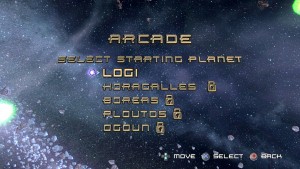 As you clear rubble out of the way there will be times when drops will appear. One is an upgrade to your three weapons—rock crusher, ice splitter, and gold meter. The upgrade will flash on and off and change to whichever one you choose  Each time you upgrade one of those weapons they become faster. They also become a lot better at clearing the rubble or enemies. When you clear enemies and rubble another drop appears and it has points that you can pick up. During your fight you might see a ship carrying something; if you shoot the ship it will drop a bomb that you can save up to use later. Rarely does this happen, but I found out that when defeating the enemies and clearing rubble a drop could be a shield to protect yourself. The shield can be on as long as you don’t try to damage your ship. 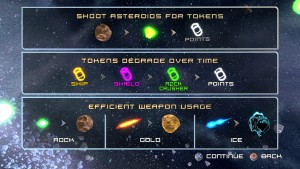 This is a guide to show you what the tokens are, and what weapon you should use against the rubble.

One thing new that they added to this game is the ability to boost. You can boost out of the way if you’re in trouble (I’ve found it to be quite handy in certain situations). The boost can also be an attack when you hit enemies or rubble. The boost is unlimited but you have to wait a certain amount of time before you can use it again. You have to wait for it to recharge.

They also added more game modes. Game modes like survival, where you try to survive as long as possible. Planet mode where you can pick the planet you want to go on. Endless mode is endless waves of aliens and rubble, and you have to try and survive as long as possible. Time attack mode—you have to try to clear things in a certain amount of time. You can also play multiplayer online, playing locally with another person if you have another controller handy. 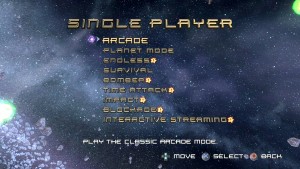 One thing I found kind of difficult in this game is over time, when you’re trying to clear a planet, there will be a lot of rubble and enemies. Sometimes you won’t even be able to see your ship, causing you to die. It’s a bit overwhelming, and it takes awhile to get used to if you want to clear planets. You can choose a difficulty when you start off, and there is easy mode for you to pick if you don’t really want to start off on normal difficulty.

The soundtrack is amazing. It motivates you to keep on trying to beat the planets, and it’s really upbeat and keeps you pumped up. The graphics are pretty good as well. There is a lot of color all over the place, and explosions going every which way.

If you’ve played the previous version, Super Stardust HD, then I encourage you to give this one a shot. Maybe you didn’t like the previous entry like I did. Gamers who like top down arcade shooters will really enjoy this game for what it is. Super Stardust Ultra is available on the PlayStation Store for $12.99.

You'll have fun with this top down space shooter as you try to eliminate aliens and rubble.