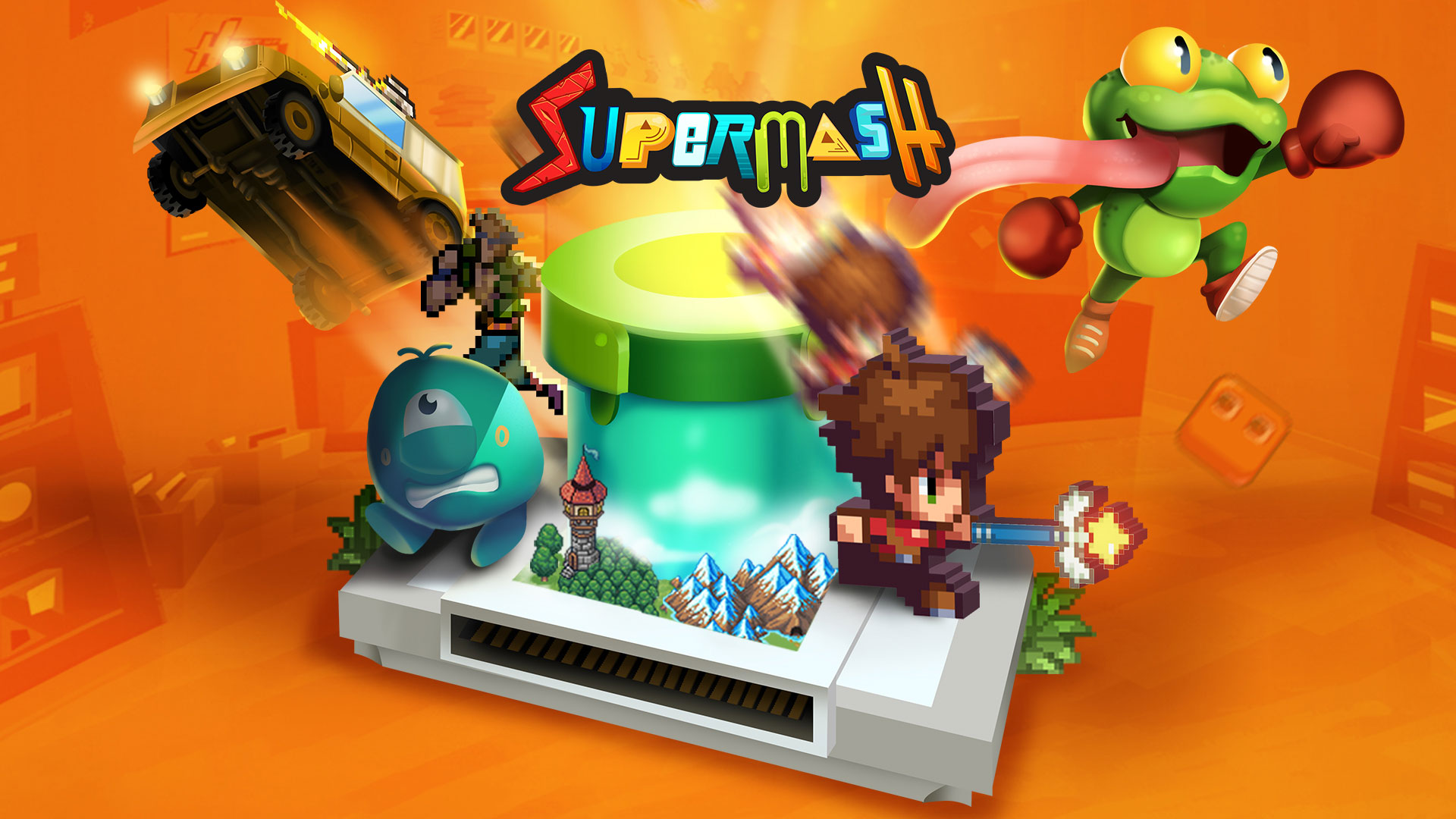 I remember reading about SuperMash when it originally launched back in December for PS4, PC, and Xbox One, and thinking to myself that it looked like Mario Maker and WarioWare had a baby. So color me cautiously excited! Turns out I was both right and wrong in my initial thoughts on the game. While SuperMash does boast some familiarities with WarioWare, the comparisons really stop there, and there is little in the way of actually creating user-generated content aside from a code for your mash-ups that can be shared with others. 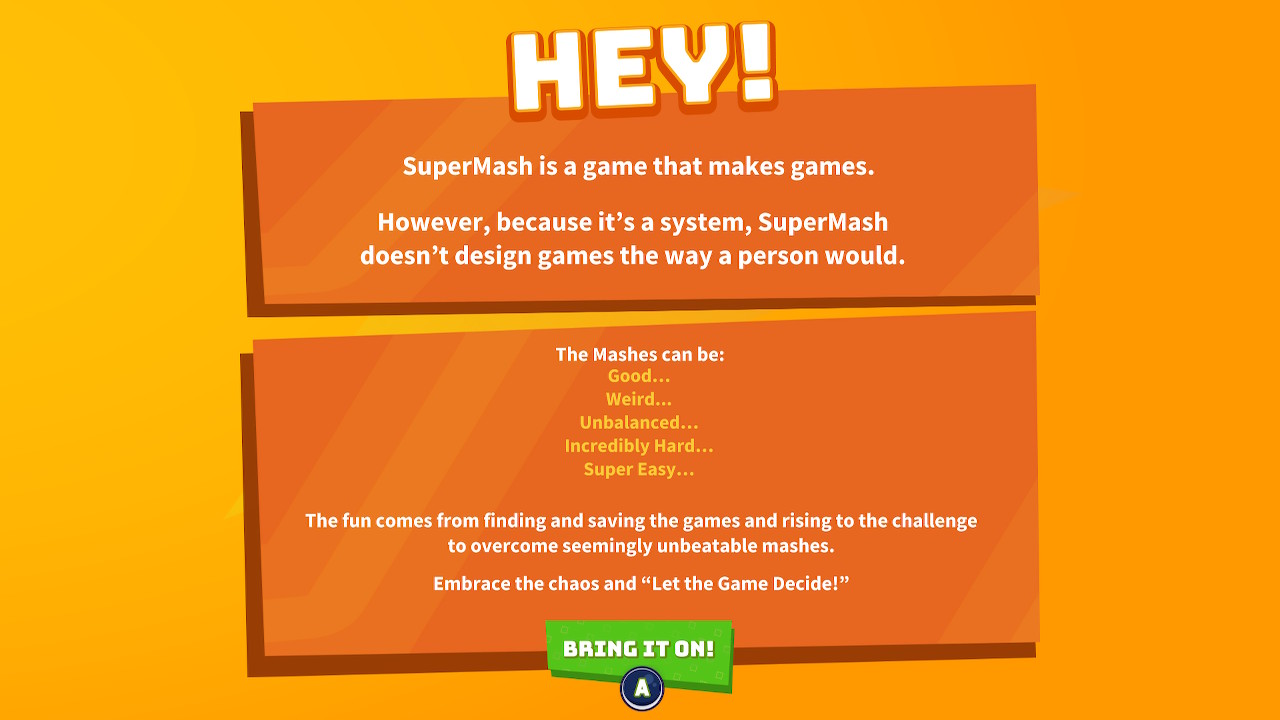 This content guide will be short as SuperMash is rated E for Everyone and there is very little here that should concern parents. There is no drug or alcohol use, any violence is what you might find from Classic Turn-Based JRPGS, Metroidvanias, and Shoot ‘Em Ups. There is absolutely no blood or gore, no sexual content, and very little—if any—mention of religion. 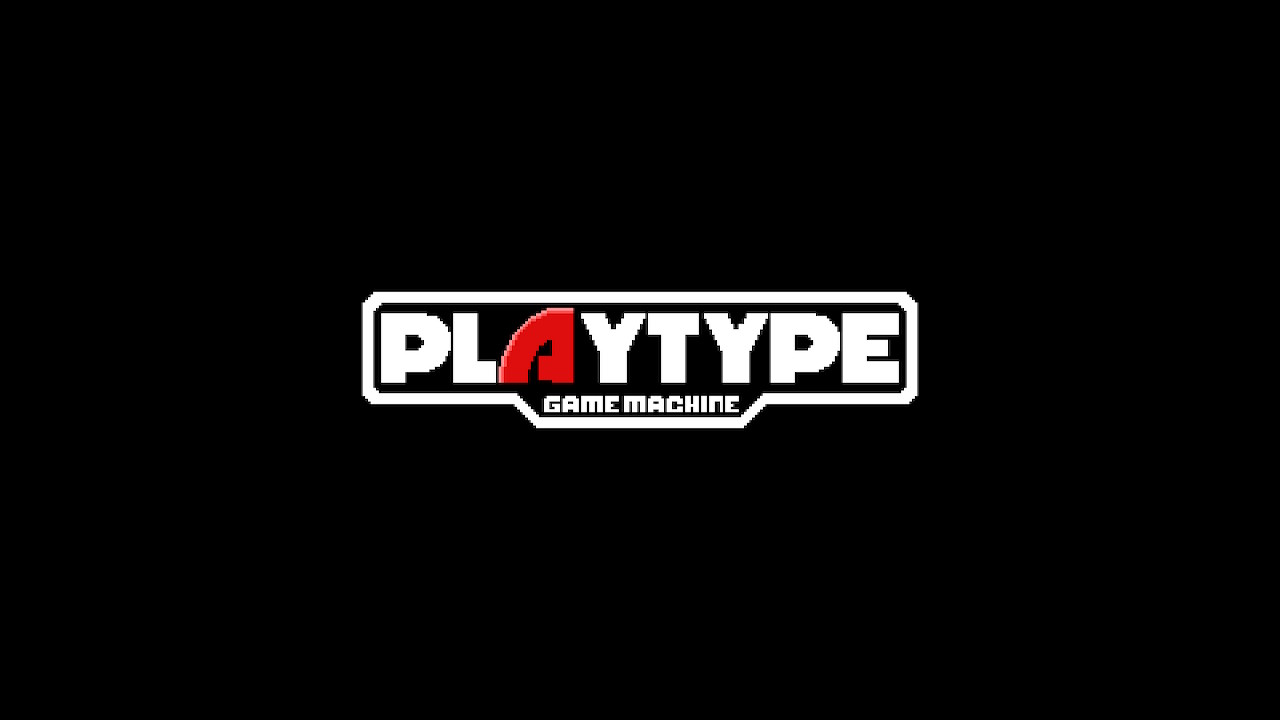 SuperMash is a game that seems to be confused about what it wants to be. On the surface it looks like a natural evolution of the formula started in the WarioWare series from Nintendo. Players will play small, bite-sized versions of games in some of their favorite genres including JRPGs, Metroidvanias, Shoot ‘Em Ups, and more. While these are cool to try out for a couple of hours and I didn’t notice a lot of repetition in the worlds, story synopsis, or characters, I was already starting to notice how bare bones the content is just a few hours into the paper-thin story.

The story of SuperMash sees three friends on the verge of losing their Video Game store. At a yard sale, they encounter a woman selling an odd console they’ve never seen before. After discovering that it can combine two entirely different game genres into one exciting new game, they set out to use it in an attempt to save their store. From there, the story basically boils down to completing tasks for the three friends and store customers unlocking new cards for the Dev Dashboard to make better mashes which can later be saved and shared with other players by creating a Mash Code. 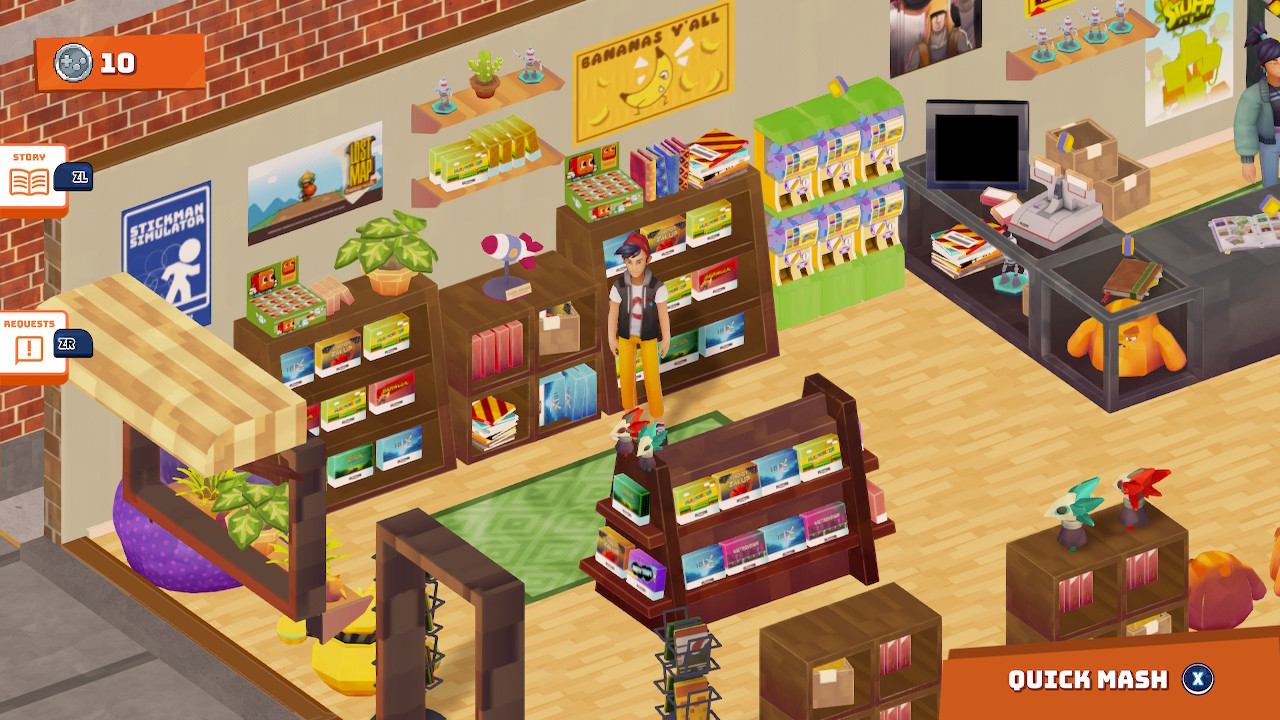 Before constructing a new “mash” of genres, players are given the option to choose one of three difficulties for their mash and the length of the gameplay sequence. A short mash can last mere minutes, while some can last much longer with a hard difficulty depending on the genre and your overall completion goal. To make things more interesting, players can use Dev Cards earned from successfully completing mashes to add additional perks or challenges. These can range from specific enemy types to new weapons and even new in-game music. 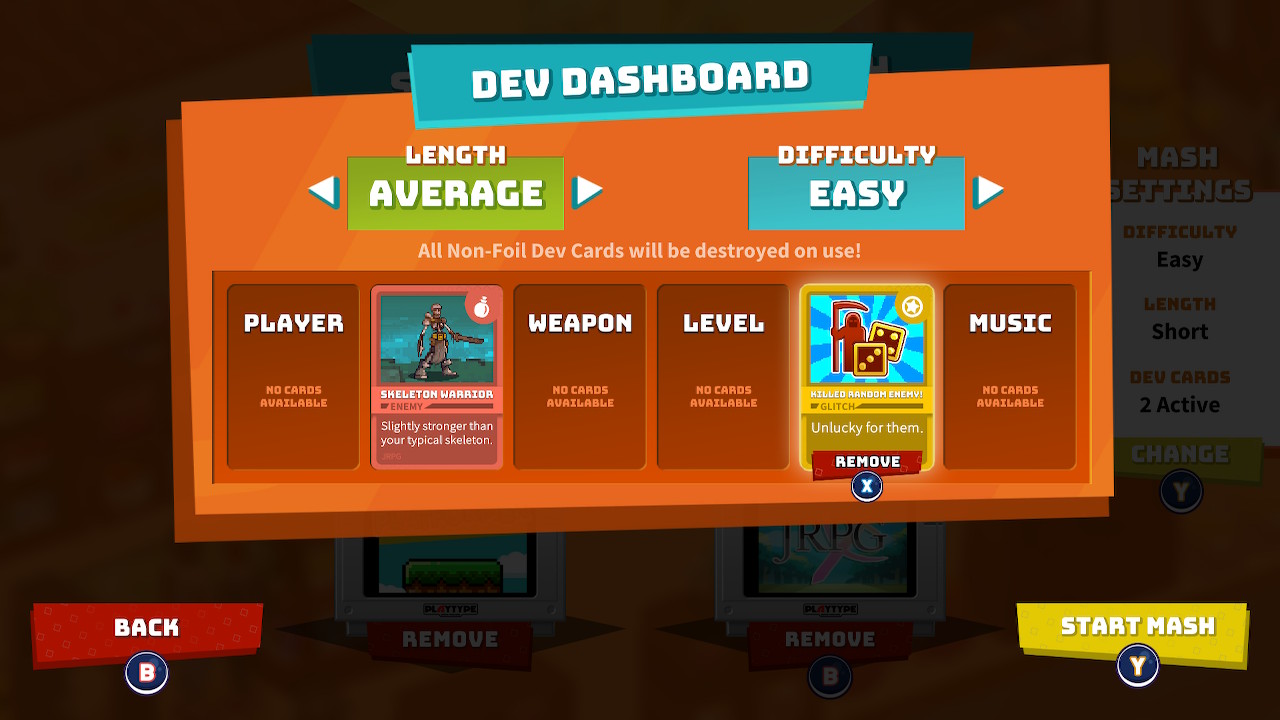 Player agency stops there, though, as everything else is randomized and each mash begins with a brief story synopsis to sum up the goal for the player to achieve. These are animated and do a good bit of world building to get players invested in the game they are about to play. Most mashes consist of reaching a set point, killing a certain number of enemies, or collecting enough currency to win. Some of these challenges even come with a time limit. This became a problem for me; a lot of the potential mashes are interesting, as are the worlds the various player characters inhabit, but by the time you get wrapped up in one of these mashes, it’s over and there is no guarantee that you’ll get that same combination of gameplay, characters, world, and story the next go-around. 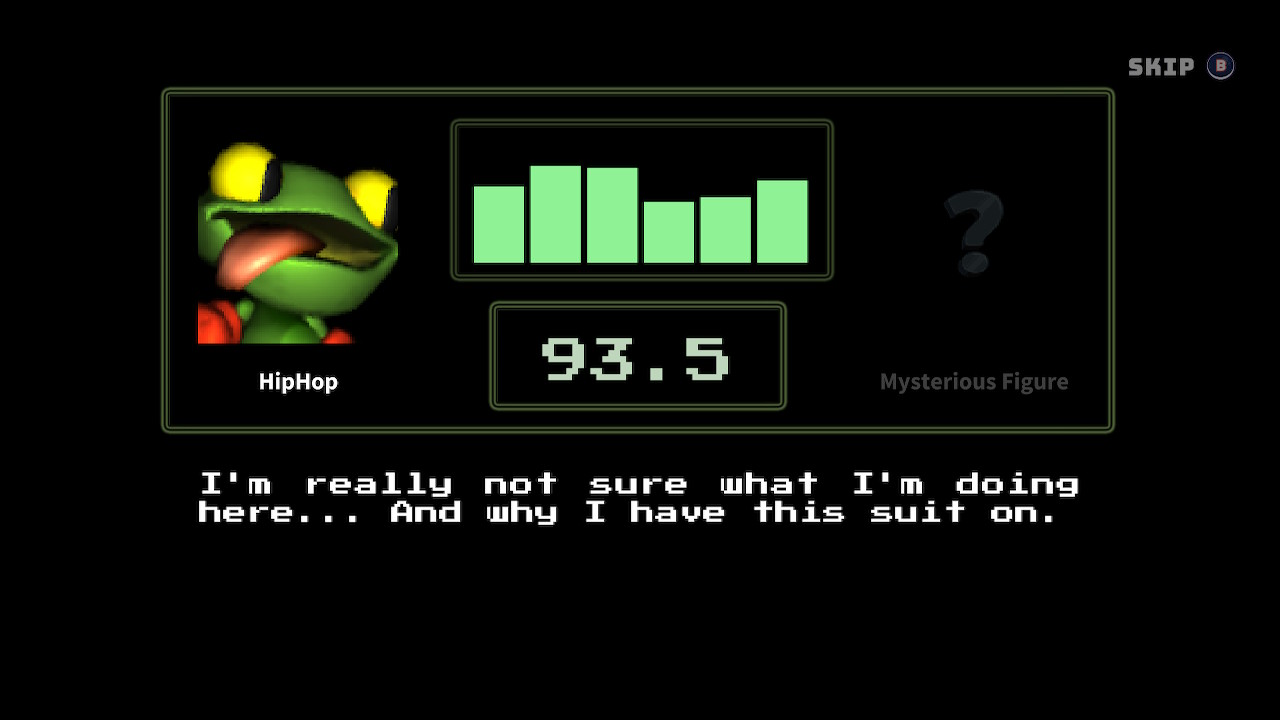 For example, one of my favorite mashes entitled “Government Sunshine”, is a clear parody of the early Metal Gear stealth games on the NES and SNES (and later on the GBC). I combined the Platformer and Stealth genres to get this particular arrangement and my player character was a frog who spit throwing stars instead of sticking out his tongue to pull enemies closer. I could also jump on an enemy’s head for a stealth kill to avoid them alerting other enemies into the area. However, while this was an interesting and fun romp through a familiar premise, my overall goal to succeed was vague and I ultimately did not complete the mash, as the brief description in the start menu offered me no solutions to advance.

Also, hidden in each mash is a glitched section of the world which usually offers a small boss fight or means of collecting the designated item to win that mash. While these offer a nice diversion, many times I would go in through the portal, kill the boss, and gain absolutely nothing for my time and effort. After doing that a few times, I began skipping these extra sections altogether unless they were required for completion.

Before each mash starts, other randomized modifiers are brought into play. These can be what allies come with you in the JRPG genre or what weapons you start with. Each mash will also sometimes provide the player and enemies with glitches, certain perks that make the mash-up more challenging or give handicaps to the player. For example, one glitch might give your character a greater chance of landing a critical hit on enemies while another might double their health, making them harder to kill. As these are completely random and don’t always fit in with the chosen genre and other aspects of the mash, there is no real strategy afforded to players and I just had to roll with what I was given most of the time. 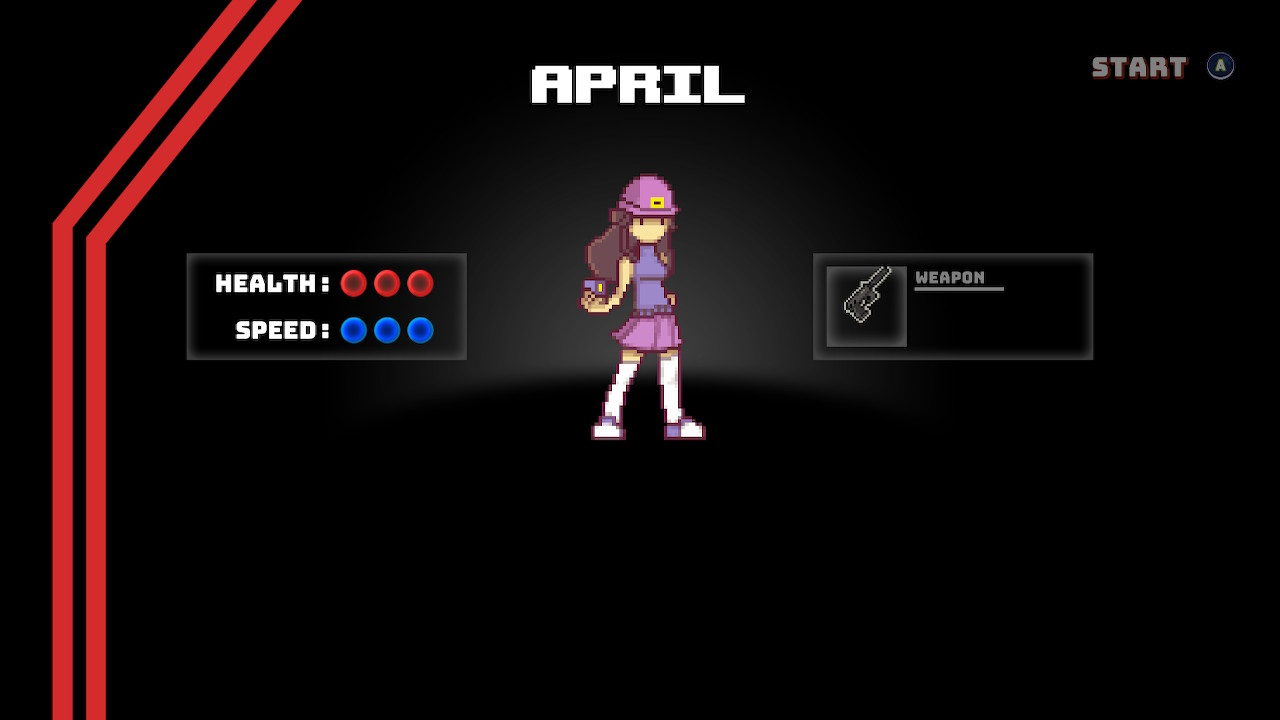 A good example of this was the actually the very first mash-up I created with the Shoot ’em Up and JRPG genres. I started out with a character who would’ve felt right at home in a Pokemon rip-off. As he was jogging through space, enemy ships came to attack and I could not figure out how to shoot back. Turns out, since I had chosen the JRPG genre, I had to open the menu, select attack, and then watch my character fire one set of missiles. I had to do this each time I wanted to fire at enemies. In a fast paced genre like Shoot Em Ups, a JRPG menu system just doesn’t work. While the novelty of it was somewhat humorous, the gameplay became frustrating in execution. I applaud SuperMash for what it set out to do here, it unfortunately just didn’t pull it off that well. 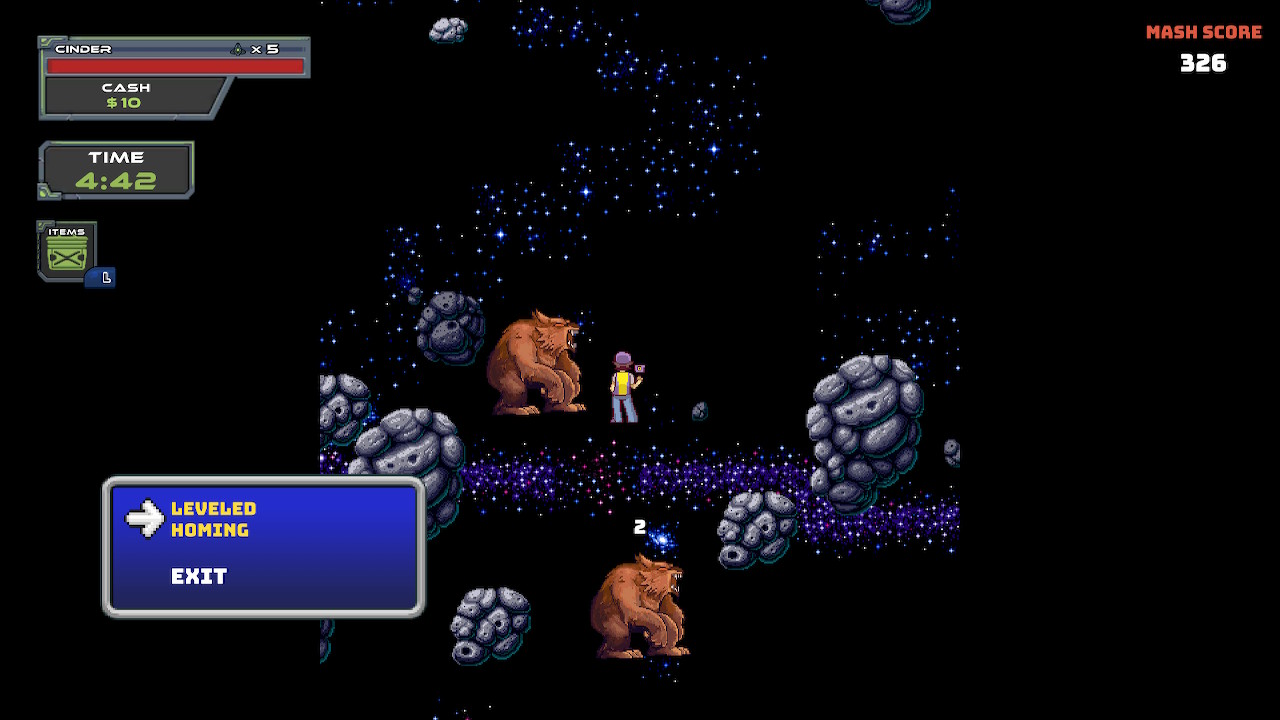 Overall, I enjoyed SuperMash despite these complaints, but there just isn’t enough there right now to make it worth recommending. Though on the e-shop page for the game, the developer has stated their plans to support the title with future DLC including new genres, dev cards, glitches, and more. If you’re a fan of the WarioWare series of games you may find a lot to love here but for those expecting player agency and customization on the level of something like Super Mario Maker should look elsewhere.

SuperMash is a unique and ambitious title that does somethings right but at the expense of many other elements of the game.