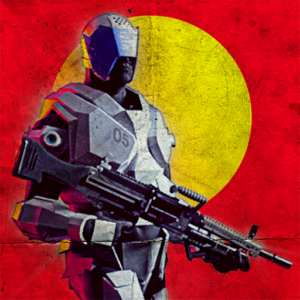 It is hard out there for indie developers. Eric Alex. Krutten and Alexander Luck of Fire Flow Games attempted a Kickstarter for their project, SYNTHETIK, in the summer of 2016. Buried under a heap of competing games, the developers canceled the Kickstarter one month later. Luckily, the game was already Greenlit, so not all was lost. With an active community on Discord, the developer continues to fine-tune the game, foregoing the Early Access phase altogether. This was not a bad choice, for SYNTHETIK is a complete, enjoyable game. 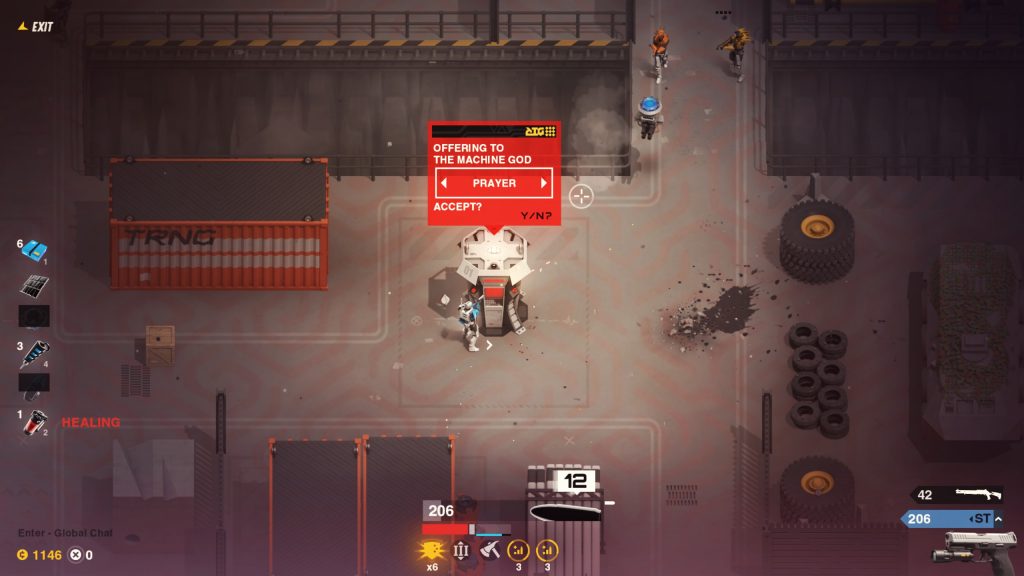 Those who are sensitive to gun violence will find SYNTHETIK unappealing as it reveres precisely that, and with zeal. The majority of enemies are anthropomorphic, and upon destruction, their husks are often left in a crumpled state like a dead body lying in a small pool of oil as a simulation for blood. The realistic sounds of gunfire might be triggering for those with PTSD.

It is possible to encounter a module that asks players if they would like to offer a prayer to the machine god. Some weapons are cursed, as indicated by a pentagram icon; though powerful, they inflict upon the player penalties to their stats. In SYNTHETIK, prayer has a chance to remove curses. 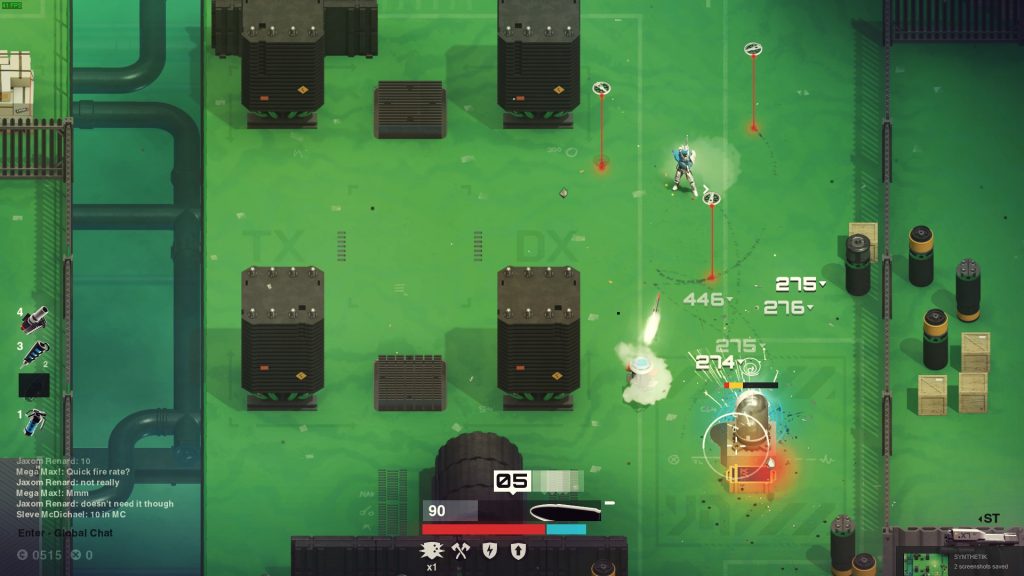 SYNTHETIK is not screenshot-friendly, as the game freezes when taking one. Apologies for the boring photos—I have attached a more informative video above.

SYNTHETIK is a no-nonsense top-down roguelite shooter that dispenses with any pretense of story. In fact, upon starting the game, I was abruptly foisted right into into the tutorial. Because I was merely “testing” the game, I failed to pay much attention before exiting. To my dismay, the tutorial cannot be done more than once without a “hard reset” in the options. Thankfully, Fire Flow Games is generous with the pop-up tooltips. 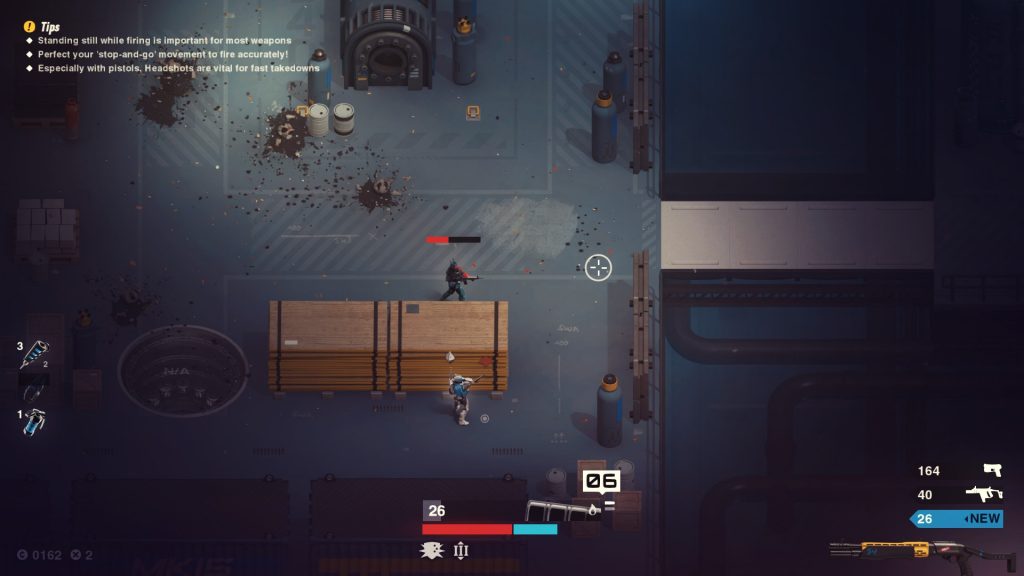 These are tooltips that new players should only disable at their own peril.

Thus, I managed to discern the basics. SYNTHETIK is a shooter, after all. How complex can it be? Well, it is a game that is easy to access but difficult to master, for its mechanics of aiming, shooting, and active reloading are akin to a simulation. Basic rules such as a stationary shooter being more likely to hit the mark of a stationary target applies here. Yet, SYNTHETIK is designed such that players will rarely find themselves in scenarios where they can afford to be immobile, let alone find stationary targets to shoot. Adversaries are plentiful, aggressive, intelligent, and deadly, so one must adapt to both the scenery and also enemy placement and attack patterns in the procedurally generated levels to shoot, hide, and survive.

This roguelite offers plenty of RPG elements: four character classes with variable stats, each able to select from three starting modules (skills), one gun, and three starting items. The Guardian is the default class, and is naturally the most durable so that players can live just long enough to gradually become accustomed to SYNTHETIK’s gameplay. Its core module, Unyielding, slightly reduces damage output while increasing movement and HP generation based upon a combo counter that builds when one takes damage or kills enemies. One of its class-specific modules, Into Battle, allows players to deal more damage while taking less, and increases the rate at which shields regenerate, if an enemy is close. Combined with the shotgun specialization, Guardians may desire to fight in close quarters. It is the class that most closely resembles a “tank,” by its ability to mitigate damage. 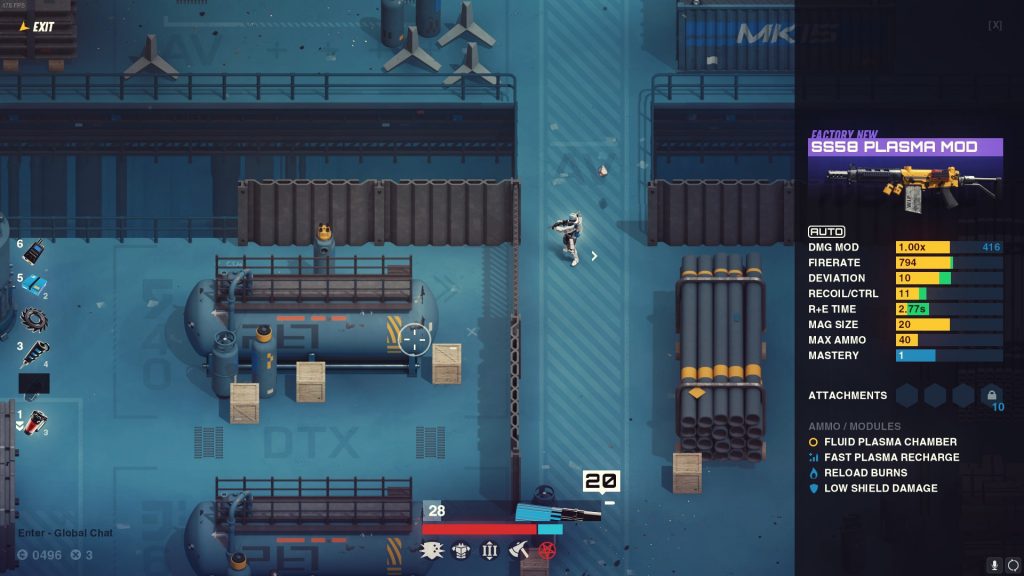 To date, the most powerful weapon I have found in the game is this plasma rifle, on my Guardian. Even though it was cursed, it easily carried me through three bosses.

The Rogue, my personal favorite class, is all about scoring critical hits through head shots. Its core module allows players to aim with the right mouse button, increases all headshot damage, luck, and chance to doge. I prefer using the Perfection class module because it stacks while increasing the probability of critical hits. The Rogue specializes in rifles and DMRs, asking of players to make their shots count lest they be overrun by a screen full of aggravated hostiles. 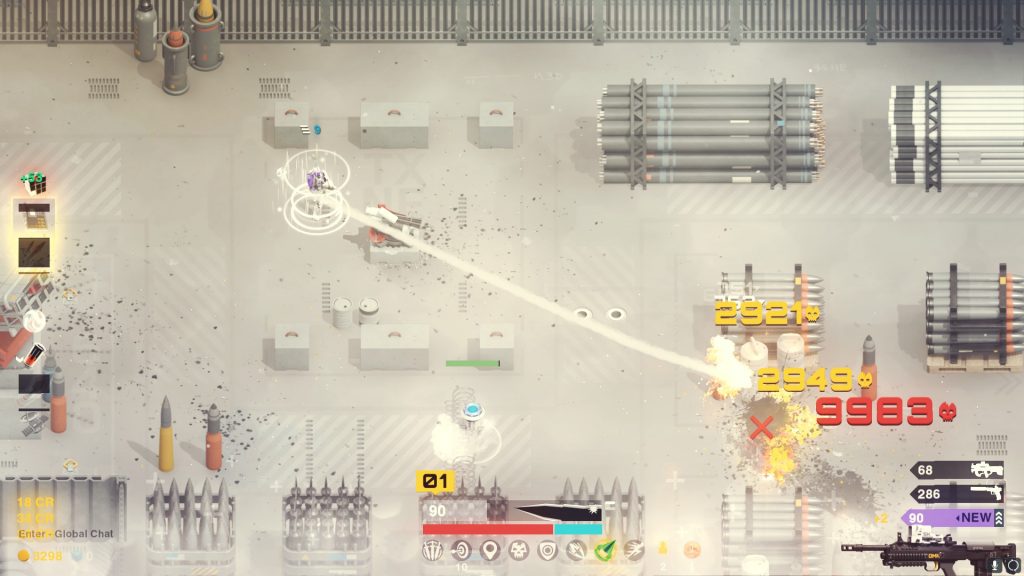 In my best run with Rogue, I found that Rubik’s Cube-like item that caused tick damage to my HP, but also allowed me to leech. Obviously, these shots restored my health to full. *resists urge to quote DBZ*

I do not have as firm a grasp on the…purpose of the other two classes. I think the Commando is supposed to be the guns-blazing glass, as its core module Rank Up grants ad hoc experience based upon how quickly he dispatches fores. A green bar lines the top of the screen, and when it fills, the Commando “ranks up,” granting a health boost, increased critical hit chance, and a refresh of all item cooldowns. Other modules I enjoy include Routine, which bestows a movement speed upgrade and armor penetration bonus to weapons as long as one successfully performs active reloads. Pack a Punch upgrades the first found weapon 3x in addition to allocating weapon mastery, an important trait that prevents guns from jamming in the heat of battle. Still, none of this contributes to damage mitigation, and enemies still hit hard. 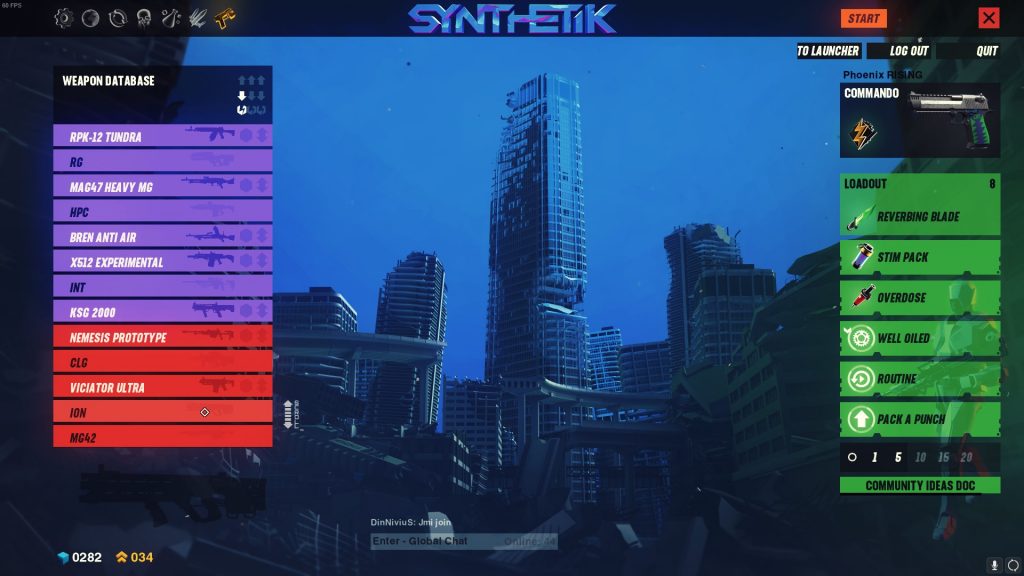 There are still plenty of high-tier weapons for me to discover.

The Specialist’s core module reduces the rate at which heat accumulates on weapons, apparently encouraging players to be more reckless with holding down the trigger. He comes with a stationary turret like the Engineer in TF2 or Torb in Overwatch, but it suffers from a long cooldown. Besides being equipped with an anti-shields laser pistol at the beginning of the game, it is not clear to me what this class has that I could not get from the others. Nevertheless, it is available for those more knowledgeable than I am,  for a change of pace. 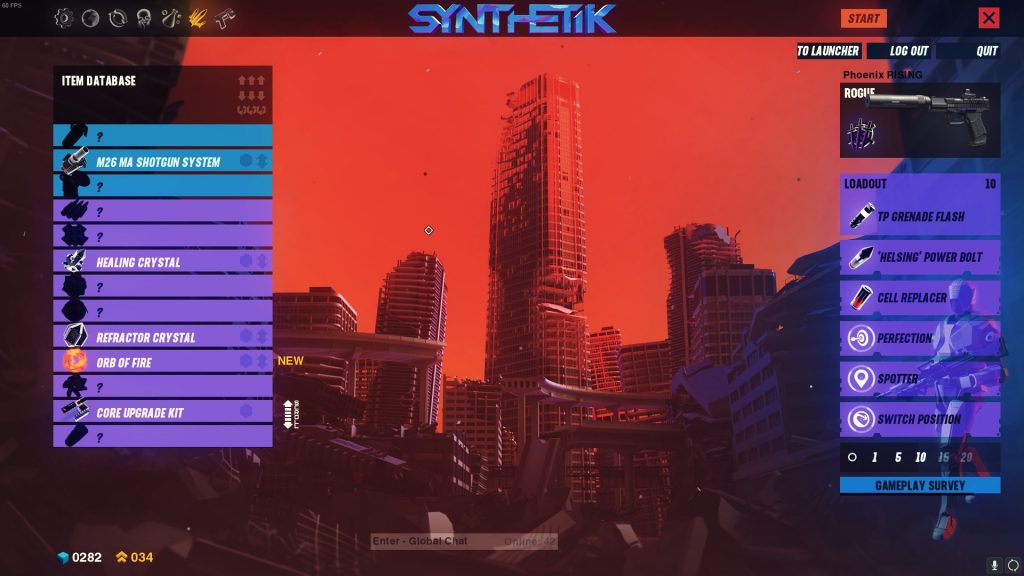 There are EVEN MORE active and passive items for me left to find.

After selecting a class, players are inserted right into a level. WASD keys control movement, while the mouse is used to aim in 360 degrees around the screen. The objective is to find and activate the stage exit to progress to the next level. One can elect to systematically eliminate all enemies while collecting weapons, items, and ammunition along the way, or exit as soon as it is found. Those who choose the latter should hunker down, because activation prompts every live enemy on the stage to converge on that point. In other words, there are no easy outs in SYNTHETIK, especially because enemy loadouts scale with levels, anticipating that players, too are getting buff along the way. 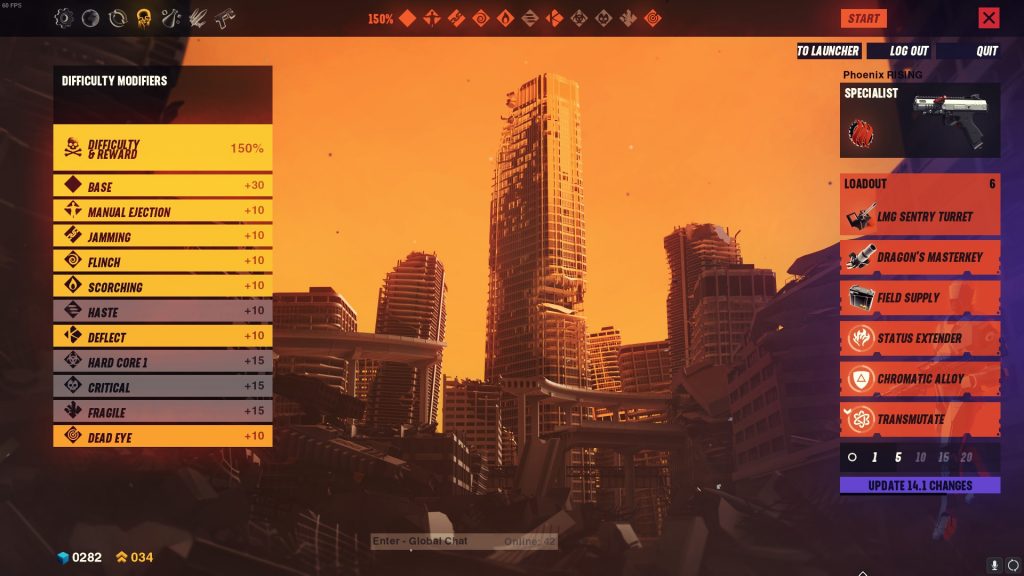 Difficulty modifiers give players the choice between hard and masochistic.

Those who know what praises to sing to RNGesus had better break out their anointing oils and other accouterments, for gameplay in SYNTHETIK, relies on it heavily. Similar to roguelites such as Binding of Isaac, one can muscle through the stages despite finding underwhelming gear on skill alone, or one can cruise through the game despite poor comprehension of its fundamentals after finding game-breaking equipment. I at least perceive that the former is more likely. Verily, SYNTHETIK is most fun when I am finding stuff like an item that spawns an ally who shoots like a Terminator in a police station, an item that essentially vaporizes a foe with lightning, a laser shotgun, or a sub-machine gun that fires forty rounds per second. After all, nobody likes struggling against bosses with trash gear. 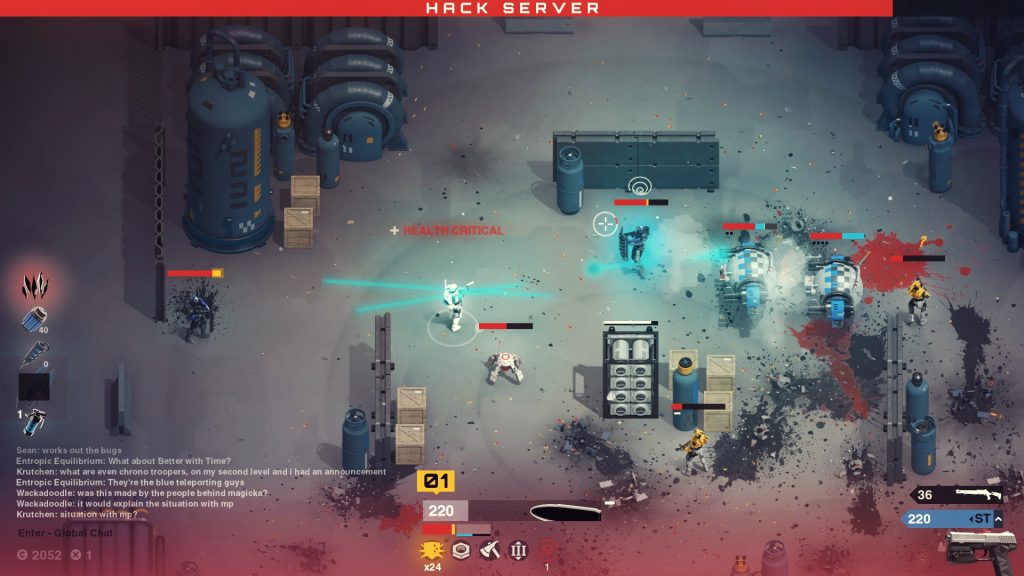 This is the alternate “boss” to E57. It is a more sensible boss and easier despite this player’s near-death experience (#NotMyScreenshot). Even so, this is an example of how things can get out of hand if one fails to take care of business.

SYNTHETIK does indeed feature bosses, and among the five I have encountered, four can be conquered with reasonably adequate equipment. The exception, I feel is a boss called “Experiment 57.” I nickname this boss the “Steam Refund” boss, even though the two-hour limit would be exhausted by the time most players encounter it. This is because the other bosses serve as examinations of a player’s mastery of the game’s mechanics, such as intelligent use of the dash (the Commando cheats by having two), when to take and emerge from cover, or knowing when to tactically retreat for recharging shields and reloading weapons. The E57 encounter works contrary to the game’s principles by placing participants into an open space and asking them to pull a Rambo. E57’s ability to “one shot” slow-moving players as they are simultaneously asked to avoid other hazards such as mines and rockets make this first boss encounter the equivalent of requiring Demon’s Souls players to defeat a red-eye knight the first time one is encountered—it can be done, but it is not fun.

What is fun though, is the kind of feedback that SYNTHETIK offers. I never thought that the sound of metallic pings and dings as a result of shooting robotic targets could offer as much  satisfaction as I have found here. Regular and critical hits alike provide players with a gratifying audible indication in addition to rapidly diminishing health bars and large numbers lingering on the screen—the more damage, he more voluminous the number becomes, as it pleasantly yet obnoxiously lingers on the screen. Firearms response with equal vigor. The crack of a sniper rifle shot, the boom of a heavy machine gun, the accurately replicated pop of the “Master Chief” pistol, and the reverberation of the rapid-fire “Auto 9/45” (Robocop gun replica) all put a smile on my face. The modern-retro music combined with the laser-tag cyber apparel that both the player-character and also the enemies adorn make for a satisfactory aesthetic, albeit a basic one that serves the primary purpose of differentiating targets from the otherwise bland environment. The stiffness of the upper torsos make sense in the grand scheme of artificial beings aiming and shooting, but they are still jarring.

Despite these its flaws, SYNTHETIK is a game that I have, and shall continue to invest into heavily. I still have much, much to unlock, and I have yet to beat the game, a fact that I am not ashamed to admit, because this is common for roguelites. Additionally, Fire Flow Games is still very active in making additions besides repairing the otherwise broken 2-player co-op mode. I can hardly blame them for choosing to avoid the checkered “Early Access” path, for SYNTHETIK is already a great game. With some additional balancing and polish, it has the potential to be among the best.

Realistic shooting mechanics in a top-down area, enemies whose ferocity scales over time and the anticipation of opening weapon and item chests like a child on Christmas make for a formula experience that is sure to have gamers return frequently.