Review: Tales Of Symphonia—Dawn of the New World (PS3) 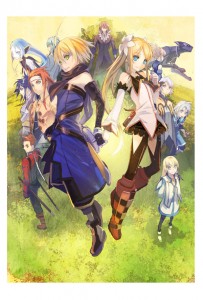 Fans of Tales of Symphonia are in for a treat. It is rare to find a direct sequel to a popular game that starts off right where the first one ended. In the RPG genre, there are games that are titled as sequels, but that don’t actually follow the original characters from the previous game. In my opinion, games such as these do not qualify as true sequels; however, Tales of Symphonia: Dawn of the New World successfully breaks this rule.

After the events of Tales of Symphonia, when Lloyd and his friends united the two worlds, Sylvarant and Tethe’alla, problems have arisen because of the unification–from climate changes that have changed entire villages, to fear from the advanced technology of the Sylvaranti,

Emil Castagnier is a young boy from Palmacosta who lives with his aunt and uncle. His parents died in the Blood Purge, which occurred when Palmacosta was caught in the middle of a battle between the Church of Martel and the Vanguard. Lloyd Irving killed his parents, and Emil now seeks revenge for them.

He meets a man named Richter Abend, who encourages him to stand up for himself and be a man. Emil seems very weak and timid and has to learn to speak for himself throughout the game. Richter is after a girl named Marta, who has Ratatosk’s core on her forehead. Ratatosk is the Lord of monsters and must be released for the world to become balanced again. Emil follows Richter, who is after Marta’s core, but, once he catches up to her, he decides to help Marta flee from Richter. 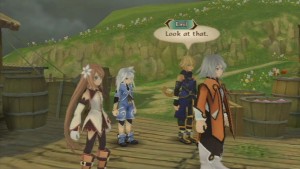 Shortly after, he meets a spirit named Tenebrae, who asks him if he wants to become a “Knight of Ratarosk” to help defend Marta. He agrees and becomes imbued with power and a new personality which manifests during battle and throughout the story. Tenebrae and Marta later explain that Lord Ratatosk is the key to bringing balance back to the world. The only way to do so is to gather the other seven Centurions who have been asleep since the destruction of the Giant Kharlan Tree 4,000 years ago.

As you continue through the story, you join up with the previous characters of ToS (Tales of Symphonia) and find out what’s going on with Lloyd, discover how the world will be saved, and (of course) put a stop to the evil that threatens to conquer all. I don’t want to spoil anything, but the story can get slow at times, and you often feel that you are just on a dungeon quest to find the cores. You go to a town, get some advancement in the story, join some characters, go to the dungeon, beat the boss, and do it all over again.

Overall, the story could have had more meat on its bones, but in this regard the game fails to truly give you a deep and engaging plot. Instead, you are given the same round-about task over and over again until everything finally comes to a dramatic close.

There is little foul language. The words b**** and d*** are used every now and then, but so rarely that you will be taken aback when you actually hear them. 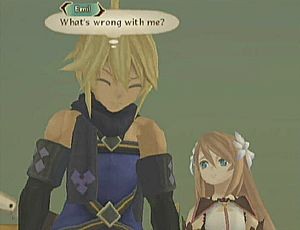 There is only animated violence, but neither bloodshed nor gore is shown. Violence is mainly against monsters or creatures, along with some human NPC’s.

No alcohol, drugs or anything of that nature is present in the game. There are a few sexual innuendos thanks to Zelos or comments directed to Sheena, but these are also uncommon. The characters are dressed modestly, so that’s not a concern.

In regards to spirituality, there is a church of Martel, but the religion isn’t brought up too much, nor are many details given as to how followers go about their worship. There are churches where you find people praying to Martel, see priests, etc. The churches and priests are reminiscent of Catholicism.

The gameplay of ToS: Dawn of a New World disappointed me. Compared to the first ToS, which was a lot faster and fun, this one just seemed boring and repetitive. The only thing that really keeps the game going is the dialogue and voiced over conversations. Battles are extremely slow in the beginning of the game, until you’re joined by the previous characters from ToS. Even then, however, they only assist for a short time, and then you’re stuck with your weak monsters and slow casting Marta. 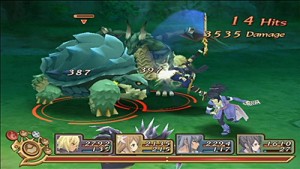 In regards to the monsters: whose idea was it to include the Katz people? Sure, they look like cute mascots, but the quests and monster building was a weak idea that was never fully fleshed out. When your monsters evolve, for example, they start back at Level 1, which means you won’t be able to use them in battle later on in the game. They will just grow in level on the roster of your party, and are only useful once you have fewer characters.

Another irk is that you cannot change the equipment of the original ToS party members (Sheena, Regal, Raine, Zelos, etc.). Therefore, it never really feels like you have a fully versatile party, with the exception of Emil and Marta. The appearance of the original cast brings some quality dialogue to the game, but once they take their leave… it’s back to good ol’ dungeon crawling, boss fights, and minimal plot progression.

The music and graphics are akin to Tales of Symphonia, so much so that, in some cases, the exact same tracks are used. You will visit the same towns as ToS and talk to the same characters, picking up where you last left them in the original game. This is nice if yo 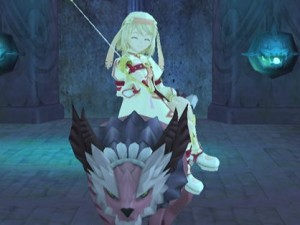 u’re a fan because you can see how they are doing and what has changed, though most of the time the change is nothing drastic.

Graphics are crisp and the animation is appealing. The intro to the game is fully animated, and as a fan of anime I truly enjoyed it; however, there aren’t any other fully animated scenes throughout the course of the story. The game could have had a few more of these thrown around during important parts of the game.

The enemies look very childish or silly, so combat often feel more like playing a child’s fantastical game. In Dawn of the New World, I didn’t get that same serious and fast gameplay that I had experienced in other Tales Of games.

As Christians, we can learn much from this game. We can see Emil battling with himself and trying to figure out who he is and his purpose in life. Every person struggles with finding their purpose, and we can learn to overcome our fears through Christ who strengthens us (Philippians 4:13). Also, learning to stand up against evil when it rises is another strong moral that is reflected throughout the game. We can all learn from Emil and Marta who, in the face of impossible obstacles, overcome them by never giving into fear and hopelessness.

To wrap all this up, I can only recommend this game to those that are fans of ToS or the Tales Of series. If you’re an avid RPG fan, you will enjoy this game, but at the same time you will feel let down because of its major flaws. The game’s slow gameplay, tedious dungeons, and boring battles, make it difficult for uninterested players to keep coming back for another play. Aside from knowing how the story actually ends and following the journey of Emil and the others, Dawn of the New World just wasn’t one of my favorite Tales Of games.

Fans of ToS will want to pick this one up to see what happens to their favorite characters. Those who have never played Tales of Symphonia (the first game) would not be advised to begin with this one, since it's a sequel that follows the first game to the letter.