Mild swearing, mild sexual humor, some characters could do with more clothes, but for a JRPG even that’s not too bad.

Tales of Xillia is an installment in the Tales series (some may recognize such titles as Tales of Symphonia or Tales of the Abyss, among others).  These games run a similar track of thought to the Final Fantasy franchise, where the individual games are not connected, but similar gameplay elements and themes are common among all.  Xillia has received large amounts of mixed praise.  The sequel is set to come out on American shelves less than two weeks from the time of this article.

As far as story is concerned, there will be very few threats of spoilers in this article.  From the start of the game, you are given the choice of who you wish the protagonist to be: Jude or Milla.  For my playthrough, I selected Milla, because the description of her character sounded more interesting and Jude sounded weak (Read: Turns out both are pretty interesting and Jude most certainly isn’t weak).  I didn’t think this dual-protagonist element was going to have any major influence on the story, but I was pleasantly surprised to find that it did.  More than once I was off alone as Milla, and Jude was actively doing something else in the story.  This one factor, if for no other reason, gives the game good replayability.

As Milla (a.k.a. Maxwell, Lord of Spirits), it is your goal to find and destroy The Lance of Kresnik, which threatens to do harm to both the spiritual and physical realms.  Along the way, you meet a bright and colorful cast of characters, each properly filling the roles set out before them, and start unraveling multiple plots that all weave into one greater, all-encompassing conflict.  Between uncovering a bloody history of war, discovering a rising conflict among current kingdoms, and dealing with the demons that wrestle in all of us, the problems are never short as you dive deeper and deeper into the expanse of Xillia’s universe.  Each member of the party successfully owns a past self, a present battle, and hopes for the future, all without the player feeling info-dumped at any particular moment in the story. 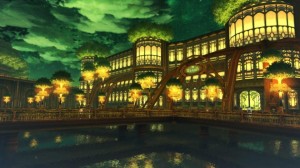 As for the setting itself, sometimes the areas you traverse could benefit from being less cookie-cutter.  It’s not a game-breaker, but between the beautiful, sprawling cities and major locations of interest, there are many sections of open land that are hurt by their repetitiveness.  Because the game is not open-world, these segments serve mostly as loot-fodder and level-up tracts for your party.  They can be pretty mind-numbing at points, and are only saved by the addition of the following concept.

One of the common story elements included in all the Tales games (at least among those I’ve played) are the optional dialogue shorts that can be accessed periodically throughout the game.  These exist should the player be interested in the possible content of the dialogue, and cover everything from the serious, to the mundane, to the humorous, to the refreshing.  I personally appreciate these shorts for their added character development during otherwise dry periods of gameplay.  Because they aren’t forced on you, there is no consequence if you skip them, yet if you feel like being more invested in the characters, these dialogue shorts have everything you’re looking for.

My only major irk with the story was the ending.  The ending was a shoulder-shrug in quality–neither bad, nor good.  It suffered in light of an otherwise superior plot.

What normally drives people to the Tales franchise is the flagship style of combat involved.  I can only describe it as an “action-arena-roleplaying” type of gameplay.  Within these “arenas,” you have freedom to move at your leisure (perhaps more-so in Xillia than other Tales games), and do battle with the opponents in the arena.  The combat is rapid, engaging, and exciting even from early stages of gameplay.  The further you progress into the story, the more prominent this becomes.  An excellent addition to this blueprint, that sets Xillia apart from other games in the series, are the Linked Artes that can be performed by the party members via combining their various Artes (magic and physical techniques) into unique, more powerful attacks.  Linked Artes increase the gameplay strategy manifold and never cease to amuse.  Even if you never use some of them in actual combat, you almost always have to try out any new ones just because.  They’re so dramatic and colorful and awesome that even if they aren’t very useful, you still like them.  Plus, the layered way that the characters announce the attack makes them easily remembered and gives an illusion of power that only increases the appeal.

As with any good RPG, Xillia boasts an exciting skill tree system which allows your characters to level-up.  This provides plenty of room for building your character sets, providing them with priority stats, and unearthing dozens of new Skills and Artes to use in combat.  Kudos to the developers, too, for balancing the characters with marvelous accuracy.  There is no one character who completely dominates the need for another character, thus making for constantly changing parties in order to cope with new situations (especially on harder difficulties).  Another note about the parties is their interesting default builds.  None of the characters fall into typical JRPG fare with things like “white mages” or “warriors” or whatnot.  Take Jude for example.  He’s a medical scholar, meaning he’s got healing Artes, but he’s also a adept with hand-to-hand combat, making him like a monk; however, some of his Skills allow for extreme movement on the battlefield, so he’s also like a ninja.  All of the characters are like this, with unique mash-ups of well-known character archtypes.

Mobility in Xillia is fast and easy, with a convenient, quick-travel system and quick character movement. Multiplayer is available for 1-4 players, though 2 is probably optimal for using Linked Artes.  The only glaring issue I found was with two particular battles late in the story.  Whereas I was able to go through most of the game on the second-highest difficulty–a difficulty I found to be pretty perfect with how much it offered without making me kill someone–I had to dial down one fight to the easiest difficulty (and I still almost lost); the other fight had a bogus trick to defeating the enemy that you are given no heads-up about.  Took me and my roommate two-and-a-half hours to beat that one.  Aside from these two situations, the difficulty was satisfying and the gameplay was all-around quite seamless.

The graphics of Xillia, on the surface, don’t seem like a large improvement over past installments.  And, in a way, they’re not.  But they aren’t bad, and they keep true to the sweeping, energetic colors and stylized art of the series, allowing for wicked looking character models, unique world-building, and intense combat.  The music is nothing of particular note, but that’s not bad either.  Some songs stand out, but mostly the soundtrack just fills in the local areas with resounding accuracy, providing emphasis to the environmental atmosphere.  The audio goes beyond just music though.  In fight, sounds are abundant, signifying approaching attacks and declaring abilities being used by both the players and NPCs.  Like I said before, the characters announce most of their Artes by name, and this small part is very fundamental to the ebb and flow of the battle, successfully filling its role by making everything more dramatic and memorable.

–          Seriously, who designs a game where you must steal from one of the final bosses in order to defeat them?  Who thought that was a good idea?  You’re fired.

Really, though it was hardly perfect, I very much enjoyed this game.  It surpassed all the games I’ve played in the Tales franchise and never ceased to provide entertainment, fun, and, at times, a little emotion when necessary.  If you enjoy JRPG’s, the Tales series, or high-action games in general, you owe it to yourself to give this one a run.  If you enjoy it, then maybe you’ll be like me and grab the sequel when it comes out later this month, despite the fact that you already have way too much to do.

SONG OF THE DAY: “Pieces” by Red
One of my favorite songs of all time.

If you enjoy JRPG’s, the Tales franchise, or high-action games in general, you owe it to yourself to give this one a run.