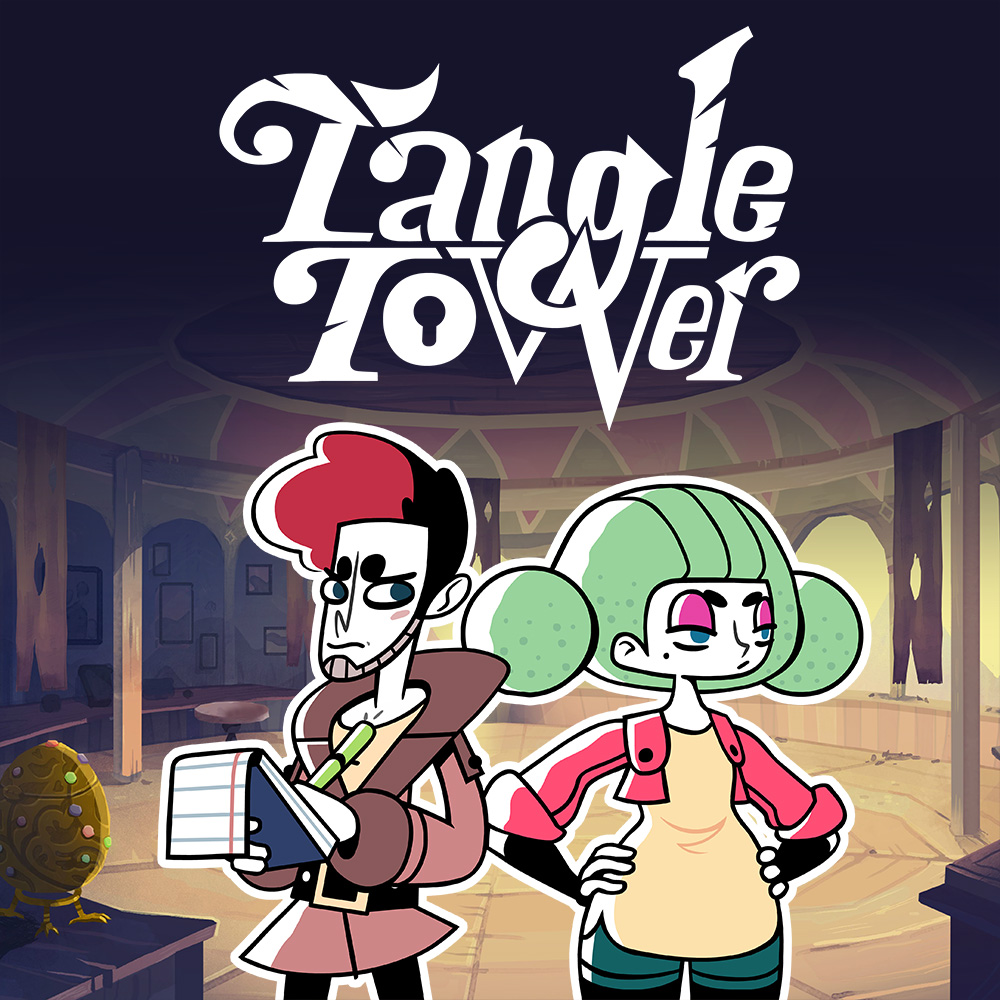 In the third appearance of Detective Grimoire, Tangle Tower asks you to solve the murder of Freya Fellow through clues, creativity, and conversation. With a whole host of colorful characters, incredible visuals, and overall charm, Tangle Tower is an almost-masterpiece in indie gaming.

Violence: In a murder mystery, there will obviously be a murder case to solve. Still, you don’t see much other than some blood stains.

In eight of the most two-sided hours of my life, I played the absolute joy that is Tangle Tower. With almost ten years of Nancy Drew games under my belt, I’ve had my fair share of detective mystery game experiences, and Tangle Tower is close to being one of my all-time favorites. Just so close!

I remember getting and playing the demo during one of Steam’s indie game fairs and my boyfriend and I adored it. We loved the voice acting, the dialogue, the art style, and the charm that just pours out of every ounce of Tangle Tower. The gameplay is largely point-n-click as you look around for clues, complete puzzles, and listen to dialogue, but every bit of it is entertaining and engaging. Everything maintains that perfect blend of quirky and clever, as Detective Grimorie and his sidekick search and quip their way through a few opening scenes.

Once the Steam summer sale hit, Tangle Tower was on my must-get list and my boyfriend started playing it almost as soon as it was in my library. And it just got better. We met more unique and interesting characters with their own animations, mannerisms, and essences. We discovered more intriguing locations, simple yet engaging puzzles, and ever-fascinating plot points. Truly, we thought, we were in the presence of greatness. A true gem of game creation. An absolute masterpiece we would love for years to come.

During the first 5-6 hours, you’ll love Tangle Tower if you’re a fan of story-telling, lovable characters, or detective-style games. You’re main goal, supposedly, is to solve the murder of Freya Fellow, a young gifted woman who was stabbed by… a painting? Maybe? And in your quest to find out what really happened, you’ll meet all the characters and uncover all the secrets of Tangle Tower and it’s three intertwined families. There’s lies, jealousy, theft, and cute animations galore as you snoop in everyone’s room and show everyone your latest discoveries.

The gameplay is simplistic, but changes up enough to stay interesting. There’s a lot of dialogue here, but it’s all well-written and often hilarious, telling you more about each character and making them feel like real, flawed, interesting people.

To balance out the dialogue, there’s a good amount of puzzles that help you find clues. Because everyone decided keys are so last century, everybody’s secret belongings are always kept behind some funky mechanism or puzzle for you to solve. While super clunky for them (imagine having to turn 20 dials every time you want to look at your family photos), it keeps Tangle Tower fresh.

And, as you find more clues and secrets, you can then bring your suspicion to each character. Then the game becomes a bit of a Mad Lib as you piece together your deductions and tell characters what’s really going on here. This variety helps Tangle Tower stay interesting—constantly drawing you into its charm and also giving you enough space and free reign so that charm can really shine.

And, before I say anything about the cons of Tangle Tower, I want to give ample attention to all the goodness here. At every turn, there are new mysteries or points of interest. You find a clue, meet a new character, or find a new suspicion and Tangle Tower just gets more delightful and interesting. You never get bored- but even if you somehow started to because of all the dialogue or the clue-searching or whatever- you’re immediately drawn back in by the good story on offer here.

You also never really feel stuck or helpless, which is often a pitfall of games like Tangle Tower. There’s always hints, more conversations, or a way to figure out what to do next. Everything feels connected, charming, and calculated as you become more entangled and enamored with the world and characters of Tangle Tower.

Also, the art style is a complete joy. Everything is so incredibly colorful, well-done, and endearing- bringing the funky world of Tangle Tower to life. Small, yet game-changing, additions like each character’s unique talking animations make all the difference. Tangle Tower feels like a real, yet mystical place with its own vibe, full-fledged characters, and colorful secrets.

But then, suddenly—and I mean suddenly—it all just tumbles down. What was this constant roller coaster of greatness just becomes a 50 foot drop of oddness and it just… gh, it makes me sad. Now, I wouldn’t say that the last hour of Tangle Tower ruins the game, but I would say that it bears mentioning. It feels rushed in the worst way, is practically solved for you, and is delivered in a massive exposition dump, followed by a closing scene and credits.

Tangle Tower could have easily been a twenty hour game, and honestly it should’ve been. The last hour of the game could’ve been as beautifully paced, written, and discovered as everything else; but for some reason it isn’t. I don’t know if SFB Games ran out of time or funding or energy, but the fast and flawed ending really changes the whole dynamic of Tangle Tower.

All those clues you found just really aren’t that important in the end and even with your deductions, a lot of them had nothing to do with the actual murder. This makes the meat of the game feel like only the first chapter when in reality, this is the finished product in its entirety.

So, while this doesn’t ruin the game for me, I highly recommend just pretending that Tangle Tower is about the overall experience, not the mystery itself. Honestly, just forget there is a murder. Most of what you’re finding and talking about has nothing to do with it anyway. Maybe that’s a bad thing in a detective game, but it really shows how Tangle Tower is really at odds with itself.

It is truly a great game. It is incredibly promising. But, on the other hand, it has some really bizarre and odd flaws that don’t match up with its greatness at all. It’s not like a great story with bad graphics or something, it’s a great story that suddenly becomes a weirdly dumb one.

The majority of Tangle Tower is wonderful and based on that, I would still recommend it. And if you’re scared off by the ending, then I’d highly recommend at least keeping SFB Games on your radar. While this may be a weird boom but bust, the next game in the series may deliver on all the greatness Tangle Tower almost has. Some Nancy Drew games have been a bit of a bust, but I’ve also never seen them be nearly as amazing as the majority of Tangle Tower is.

There’s a lot of potential and promise here. If you’re willing to absolutely adore a few hours in a quirky, lovable, and interesting world, laugh at some amazing, witty dialogue, and simply ignore the crappy end of an otherwise glorious ride- then pick up Tangle Tower. With the right expectations, you’re in for one of your almost favorite games of all time.

Tangle Tower is a gem of an indie game, even if it doesn't fully deliver on the mystery side of things.

A quirky teenager from Las Vegas who loves finding the adventure in the mundane, talking about everything, and bringing out the brilliance in others. She's trying to figure out this whole life thing while pursuing the Savior who so endlessly pursues her.