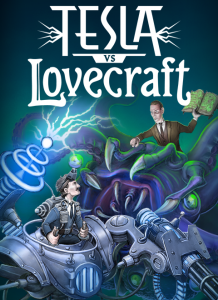 Although H. P. Lovecraft and Nikola Tesla were relatively unknown figures at he turn of the 20th century, they had been gaining in postmortem postmortem popularity toward the turn 21st. As a fan of the Allies faction in Command & Conquer: Red Alert in the 90’s, I was jealous of the Soviet’s Tesla coil; because Wikipedia did not exist in those days (Encarta, anyone? Encyclopedia Britannica? Am I showing my age?), I had no idea that the tank-roasting defensive structure—or shock troopers—were based on the name of an actual person. In modern times of course, Tesla, Inc. is a dark horse manufacturer as engineering shifts toward electric motors. Likewise, I have seen creatures inspired by Lovecraftian lore without knowing the source, such as the Mind Flayers of D&D—specifically, Baldur’s Gate 2. Quite simply, it appears that SHMUP specialist, developer 10tons, best known for Crimsonland, wished to geek it up by experimenting with these two pop-culture figures in Tesla vs Lovecraft. 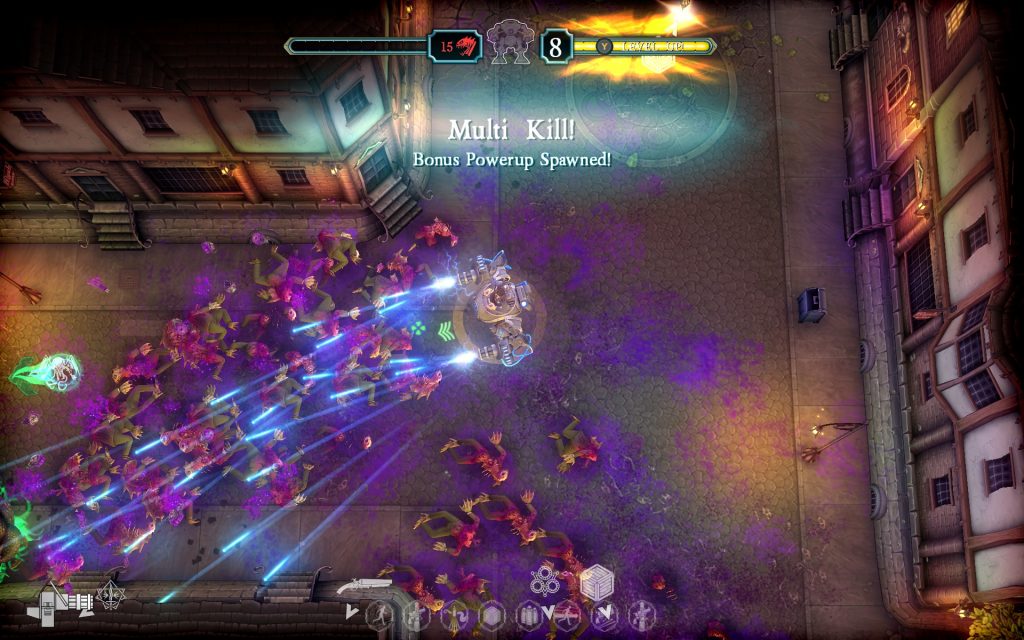 Wiping out a mass of adversaries in short order will grant an instant item drop, so it is a good idea to do this as frequently as possible.

As this game is called Tesla vs Lovecraft, expect to utilize exotic fictional weaponry against also fictional Eldritch monstrosities of Lovecraftian lore. These creatures are randomly spawned through green portals in the ground, sometimes accompanied by a Cthulhu-like statue that until destroyed, channels a portal of its own, complete with runic markings. The book from which Lovecraft conjures is unnamed in the game, but I am certain that it is the Necronomicon, an imaginary book of magic

As Tesla vs Lovecraft is a SHMUP, the usage of guns is a core mechanic. Enemies are not only shot, but they can also be electrocuted and exploded into purple splatters of limbs and goo. Tesla himself is capable of suffering damage, but no red blood appears in this game.

The story forged to bring these two pop culture icons together is throwaway. As a man of science, Tesla is demonstrating of his iconic Tesla coil to an audience, and Lovecraft disagrees, interrupting the show by climbing on-stage, “old man yells at cloud” style. He is arrested, but breaks out of prison by summoning Cthulu, and subsequently assaults Tesla at every turn. Of course, Tesla defends himself, using an ever-evolving arsenal. 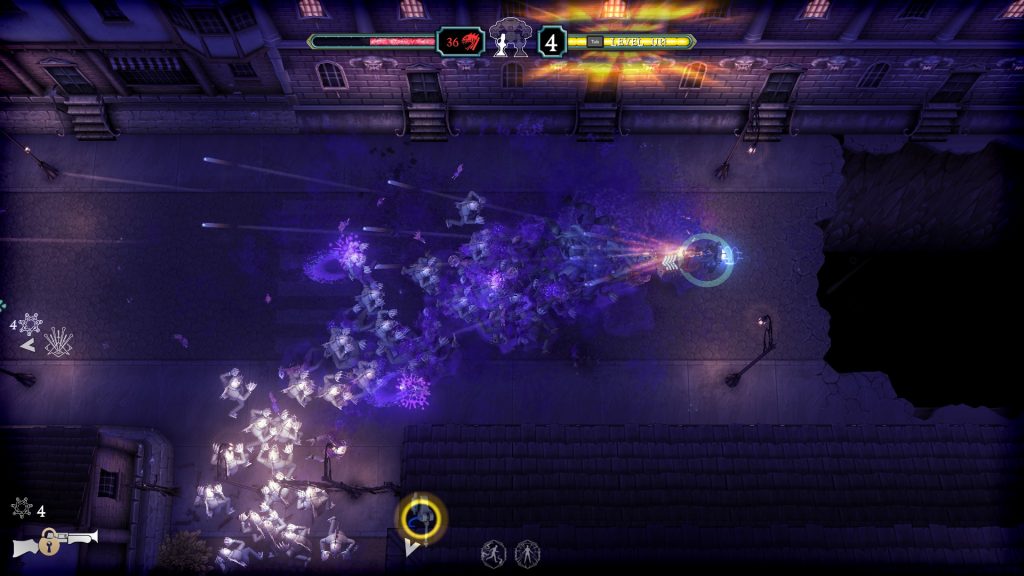 After finding an ideal weapon like the repeater shotgun, it can be “locked” with the “R” key, preventing accidental pick up of another (sometimes weaker) weapon. The padlock over the weapon in the bottom-left corner confirms this.

A SHMUP is only as good as its enemies, weapons, and power-ups. I shall begin with the first element; Lovecraft fans will recognize these names like a roll-call. Deep Ones are the most basic enemy, behaving like the goons they are, walking to Tesla while slashing with their claws. Spawn of Dagon serve as brute meat shields that like to “leap” and attack in straight lines, but in-game, this looks more like a dash or tackle. Tiny Spiderghouls try to surround and overwhelm with numbers, as do their cousins the Fire Vampire and Awakener—the former leaves a circular burn zone when they die, while the latter emits a slow-moving projectile. Flying Polyps and Shoggoths round out the bestiary, and they are also the most grotesque, with tentacle and orifice counts exceeding conventional notions of normality. The Polyps emit a short-range, but ultra-damaging laser column, while the Shoggoths spew homing projectiles that orbit players in a circular pattern—only hiding behind an obstacle will dissipate the green orb of malice. The low-tier fishmen might be accurate interpretations of Lovecraftian exotics, but I do not find them nearly as exciting as the Shoggoths, which are also rarer. Unless the extraordinary enemies appear, killing armies of Deep Ones and Spawn of Dagon can grow dull.

I would have liked to have seen more enemies like the Flying Polyps.

Poor Tesla begins with a meager pistol, but every map is balanced to begin a low-level weapon spawn. In fact, I should double back to say that the levels in Tesla vs Lovecraft begin in “easy” mode, progressively unlocking a new weapon or perk after every map, just like in Crimsonland. Once something unlocks, it has a random chance to appear in every map. Additionally, higher tier weapons unlock as Tesla levels-up in-stage. On the bottom level is the sawed-off shotgun that shoots twice in a cone-shaped area before a reload is required, and a basic machine (Tommy) gun that is more accurate the closer enemies are. I tend to think of the next tier including the Rapid Tesla Gun, which…rapidly…fires a line energy orbs in imprecise fashion; the Tesla Shotgun functions like any other shotgun, except that it uses the same slow-moving energy projectiles as the Rapid Tesla Gun; the repeating shotgun shoots in a burst of multiples like a machine gun; and the gauss shotgun only fires twice, but pierces, with projectiles going through multiple enemies caught within its cone spray. The highest tier includes the gauss assault rifle which rapidly emits bolts of plasma streaking across the screen; the ball lightning gun, which creates slow-moving, but large balls of electricity. 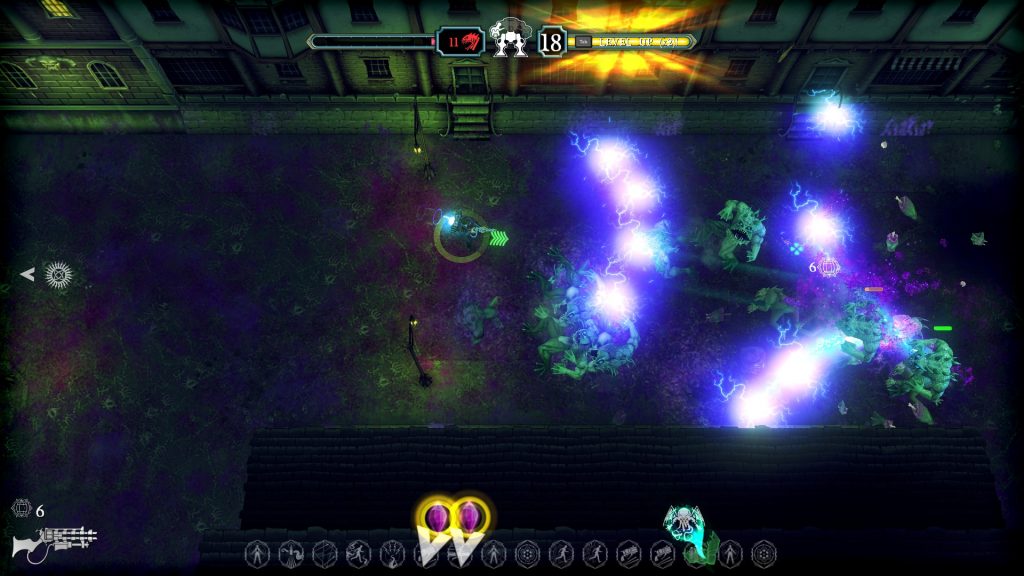 The ball lightning gun is actually a poor weapon to pick up if one does not have the appropriate perks. But after stacking additional shots and fast reload, it becomes a devastating “end round” weapon.

These guns are further enhanced with randomly-generated perks granted through gaining enough experience to level-up. It is only possible to choose one out of two options at a time, so like weapon spawns, players are at the mercy of RNG. Like any game, there are some throw-away skills like poison bullets, but the piercing, ricochet, fast loading, increased damage, and double-barrel (extra projectile) perks can turn even a humdrum weapon like the basic shotgun into a weapon of mass destruction. Tesla vs Lovecraft achieves its best when gauss rifle bolts or bullets from Tesla’s mech are flying all around the screen. 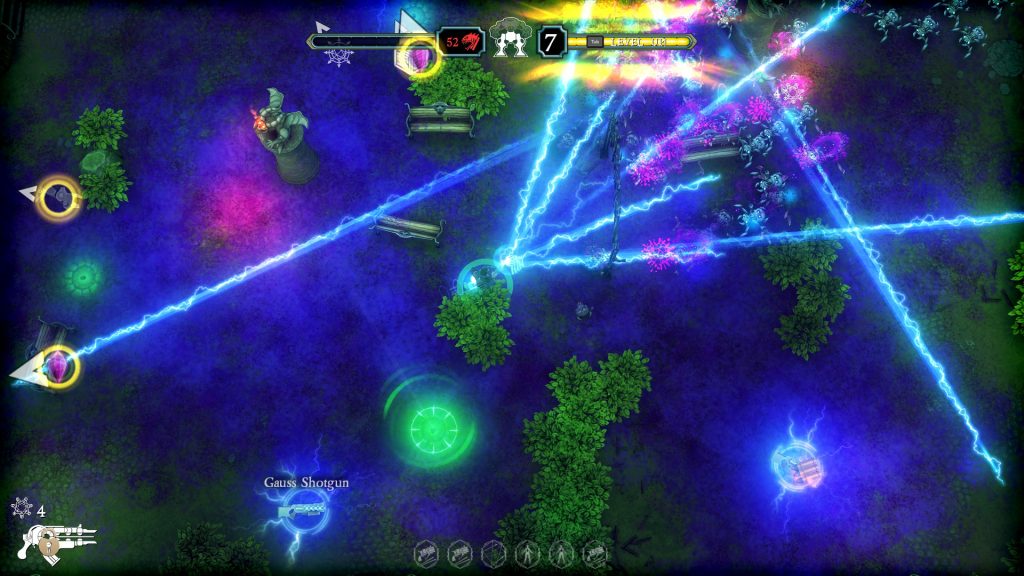 Indeed, Tesla has a few “ultimate” power-ups, most of which I will leave readers to discover. Notwithstanding, the mech that is on the cover art is an item that can be activated by collecting parts in a stage. Combining Tesla’s Nex Machina-like “bink” ability for teleporting through enemies and obstacles with Tesla vs Lovecraft‘s arena-style city and graveyard maps, collecting these robot parts can be too easy at times, or, not even worth the trouble. 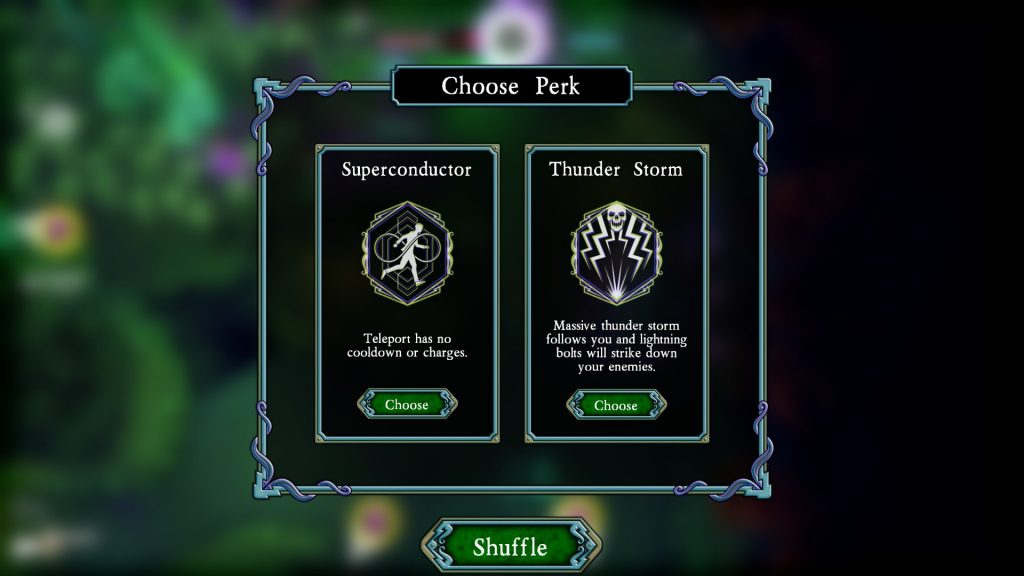 Want some game-breaking super perks? With some patience, luck, and upgrades to passives at the menu screen, that can happen.

Speaking of easy, the first series of maps on “normal” difficulty are almost remedial in their difficulty. I struggled to immerse myself into Tesla vs Lovecraft because the game presented little to encourage me to fully-utilize the W, A, S, D keys to move, space bar to blink, and the mouse to aim and shoot. Multiple sessions were necessary before I could complete a run in its entirety. Aether difficulty however, did not hesitate to punch me right in the mouth, a difficulty spike for which I was pleased to encounter so that I could put my skills to the test. Aether is fair, but there are plenty of instances in Eldritch difficulty where if it were not for RNGesus saving the day with several favorable rolls for weapons and perks, I would have never conquered several maps. To the credit of 10tons, they have designed a SHMUP such that with persistence, even a mediocre gamer can play Tesla vs Lovecraft and enjoy it. 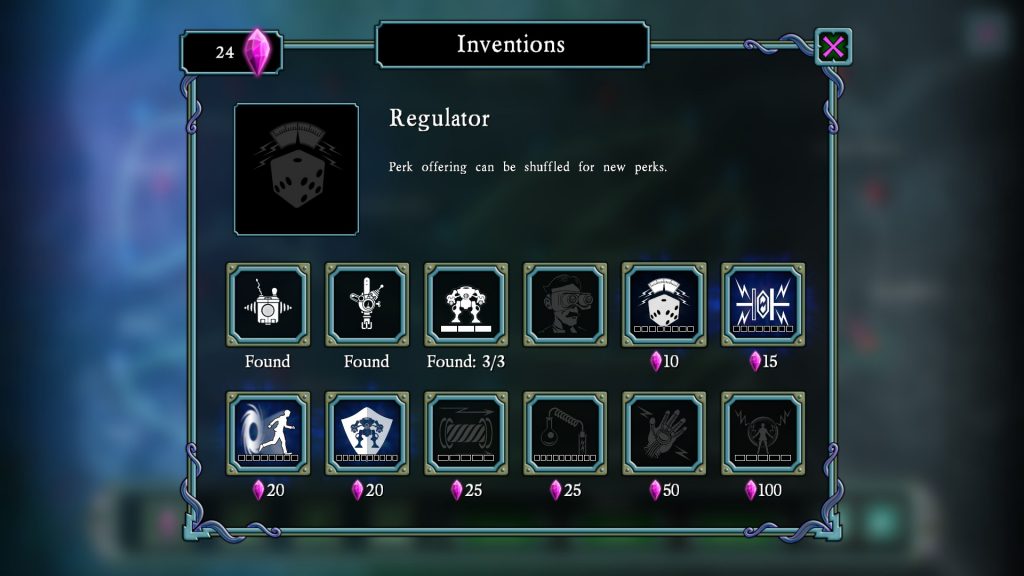 Collect and use Aether crystals to upgrade passive abilities, such as being able to re-roll perks, get an extra charge for special weapons, increase the durability and timer of the mech, or begin every stage with a free random perk at level 1. These can be upgraded with each additional tier requiring more crystals.

Tesla vs Lovecraft is most certainly an evolution from Crimsonland, with the most obvious enhancement being its graphics, scale, and enemy density. Still, I believe that the enemy design here is not as dynamic as spiders that split every time they are hit. Even the Cthulu statues that generate enemies endlessly are an allusion to Crimsonland‘s similarly-functioning dwellings, but they do not frequently appear. Furthermore, Tesla vs Lovecraft possesses a survival map, but it is designed primarily for those who have maxed out their Tesla’s passives. Additional modes and handicaps are absent, too. However,Tesla vs Lovecraft does not strike me as a game seeking to perfect SHMUPs, but instead, it offers a modern, but humble rendition of characteristics relative to the genre. Fans of 10tons or SHUMPs alike will certainly get their money’s worth here.