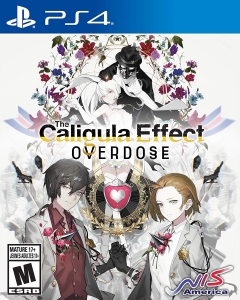 I’m a sucker for just about anything with RPG mechanics. After seeing The Caligula Effect in the storefront a few times over the years, I was curious, but until the release of the updated Overdose port, I never pulled the trigger. So what was I missing in Mobius? Is The Caligula Effect: Overdose worth your time or should you listen to Vocaloid lullabies forever? 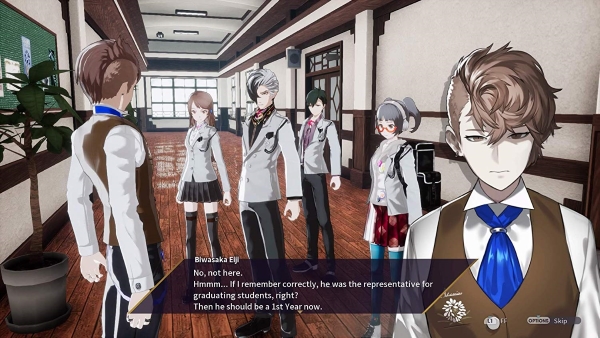 Spiritual Content: Everyone in the world of Mobius is there because of issues in their real life. As a way to help each of them cope, two vocaloids (digital beings known for performing music) Aria and μ,(Greek origin, pronounced “Myu”) worked to create Mobius. Here, people’s souls are transported in an attempt to relieve their worries of the real world. After realizing they were stuck in a constructed world, our protagonists, the Go-Home Club, take a page from Proverbs 4:23 (NIV): “Above all else, guard your heart, for everything you do flows from it.” They know they must defeat μ and return their souls to the real world.

Violence: There is animated violence. People get shot, stabbed, hit with hammers, and the like. There is no gore but it can be jarring to watch an enemy take a laser blast square through the chest. Enemies just de-rez into nothing when they’re defeated.

Language/Crude Humor: There’s a substantial amount of foul language in the game. Kotaro is easily set off and fairly free with his vernacular. 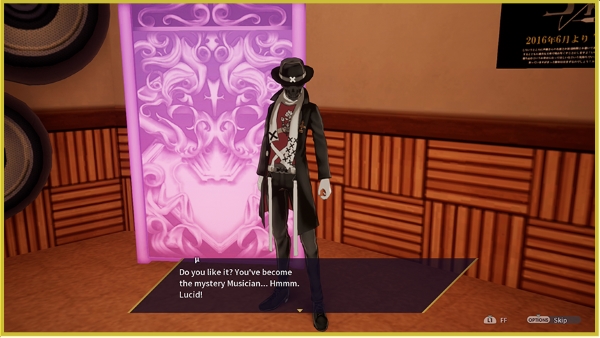 Sexual Themes: The characters in the game are portrayed as high school students (though some are just taking that form in Mobius), but don’t let that fool you. True to form for many Japanese RPGs, there’s a certain breed of sexual content present. The game contains stalkers and perverts. They’re even releasing bathing suit DLC for each main character (for $2/each), which, again, will be represented on characters who are supposed to be teenagers.

Positive Themes: Friendship, truth-seeking, and overcoming your fears. You can talk to and befriend each of the 500-ish students in Mobius. As mentioned above, each character is in Mobius because of some hangup or issue in the real world. You’ll get to see characters struggle to face and overcome the issues that brought them to Mobius. New to the Overdose edition, you’ll get to take on the role of an anonymous villain and see the world from both perspectives. 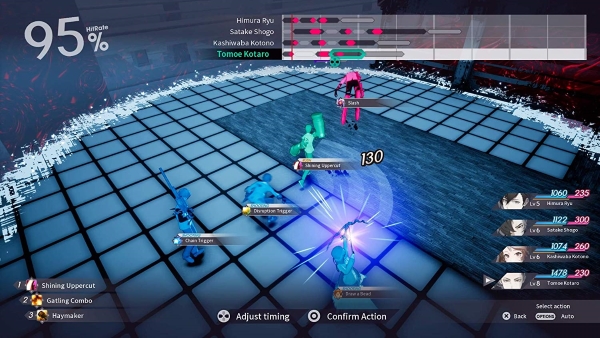 As with many RPGs, Overdose is a rather lengthy storied affair. The narrative of Caligula Effect is intriguing, but it feels like its walking well-trodden ground. You are a nameless protagonist (and new to Overdose, you can choose to be a young lady) who notices some strange happenings at the school assembly. Before long, you’re approached by members of the Go-Home Club, a secret organization of students who realize they’re trapped in a fake world and want to return. Now, you’ll have to take out the Ostinato Musicians to get to μ if you want any chance of returning to the real world. The story has some fun moments, but it ultimately feels like a tropey anime narrative complete with template personalities (and, coincidentally, was originally developed by the Aquria, the studio that created Sword Art Online: Hollow Fragment, another game where you’re trapped in a digital world). 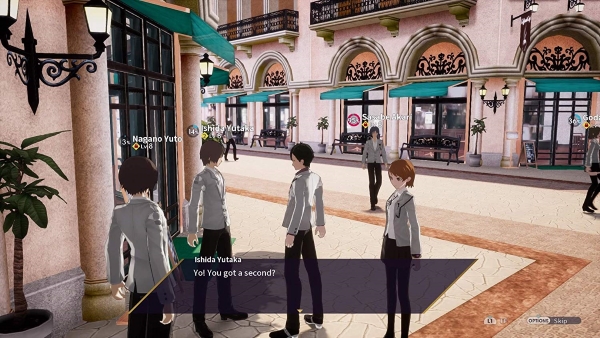 The game has a few unique gameplay mechanics that are worth discussing. The combat system in Caligula Effect offers an alternate take on the traditional turn-based arena combat by utilizing timelines for each character. You can issue up to three maneuvers with each party member, watching the most statistically probable scenario play out before confirming each command. You’ll be able to adjust moves up and down a timeline, allowing for some pretty interesting cerebral scenarios. For example, one party member can knock a foe into the air, while another has an attack that can ONLY hit airborne enemies. It’ll be up to you to plan out each time frame, getting the most bang for your buck. Using this system to its fullest is actually pretty fun. You can even topple some much higher-level enemies by using proper tactics (and maybe getting a little lucky).

One system I’m not a particular fan of is the game’s friendship system, known as the Causality Link. There are 500+ students in Mobius you can talk to and befriend. Reaching a certain point with each person will let you fill out a large grid that grants bonuses and more. You can even have each of those 500+ students join and fight alongside you. It’s a system that sounds neat, but in practice, it feels more like a puddle-deep lake. You can fully befriend students by talking to them a few times. What’s more, students are like throwaway pokémon. Why would you want to take them with you when you’ve been investing in your party for the last 25 hours!?

New to Overdose is the opportunity to take on the role of a mysterious Ostinato Musician (the bad guys). You can check things out from their perspective, even joining up to thwart your Go-Home teammates in combat. Yeah, the Go-Home Club knows they’re in a fake world and want to return, but not everyone is so eager to go back to their dismal reality. It’s not often you get to join and see things from the antagonists’ perspective and I appreciate the effort. 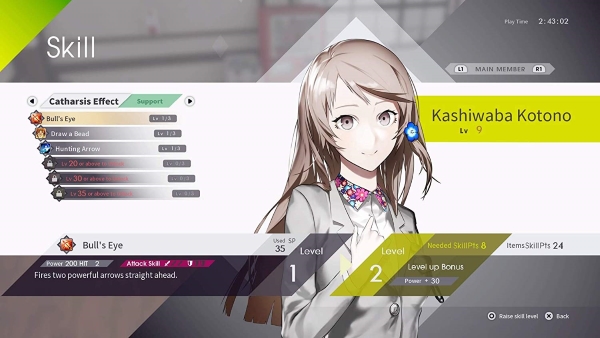 In regards to the game’s aesthetics, I want to bring to light the phenomenal soundtrack. As part of vocaloids creating this world, it should come as no surprise the game is jammed full of toe-tapping J-Pop tracks. Its impact is highlighted by how the music dynamically shifts from the instrumental tracks that play as you explore each area to the vocal versions that kick in when you enter combat. This effect is probably the single most impactful contribution Caligula Effect makes to gaming as a whole. I would love to see this sort of auditory transition used effectively in more games going forward.

The game’s visuals are a bit tamer. The look is passable, but it doesn’t feel like anything particularly special. The fact this was originally a Vita game feels apparent by the way explorable world areas are constructed. Character models have been reworked for increased fidelity, but with the world built as it is, it’s hard to shake the feeling that Caligula Effect is constrained by its origins a bit. 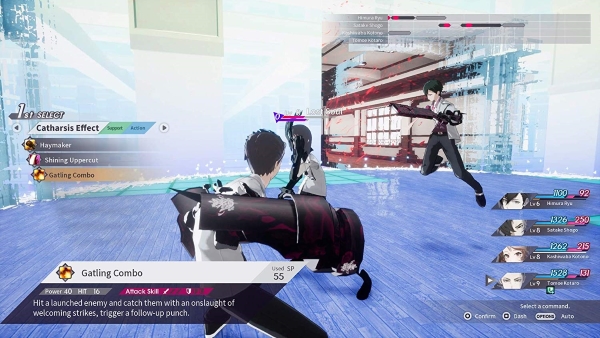 The Caligula Effect: Overdose is an RPG with a great soundtrack, phenomenal audio design, and a fun, cerebral combat system. Unfortunately, the narrative cues feel well-worn, the characters are a bit cliche, and the Causality Link system comes across as shallow. Still, kudos for granting players the chance to sympathize with the bad guys if they choose. Folks looking for a JPRG with something new may find a few things here to enjoy and fans of the original release will be happy with added content. It may not pique the interest of many beyond that.

The Caligula Effect: Overdose is an RPG with a fun combat system, fantastic J-POP soundtrack, and wonderful audio design. Unfortunately, the story feels rote, the characters are cliche, and the Causality Link system is largely superficial. Kudos are given for allowing you to take on the role of a villain and sympathize with the antagonists.