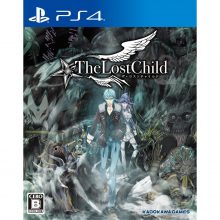 In 2018 most games are incredibly fluid, from arcade action to walking simulators, and everything in between. On one end of the spectrum you have non-stop action, and the other you have investigative storytelling and environmental exploration leading you to two very different senses of accomplishment at the end of your journey. Developer Kadokawa’s The Lost Child is a mix between dungeon crawling excitement, supernatural investigative journalism, and the creature catching lore of Pokémon. 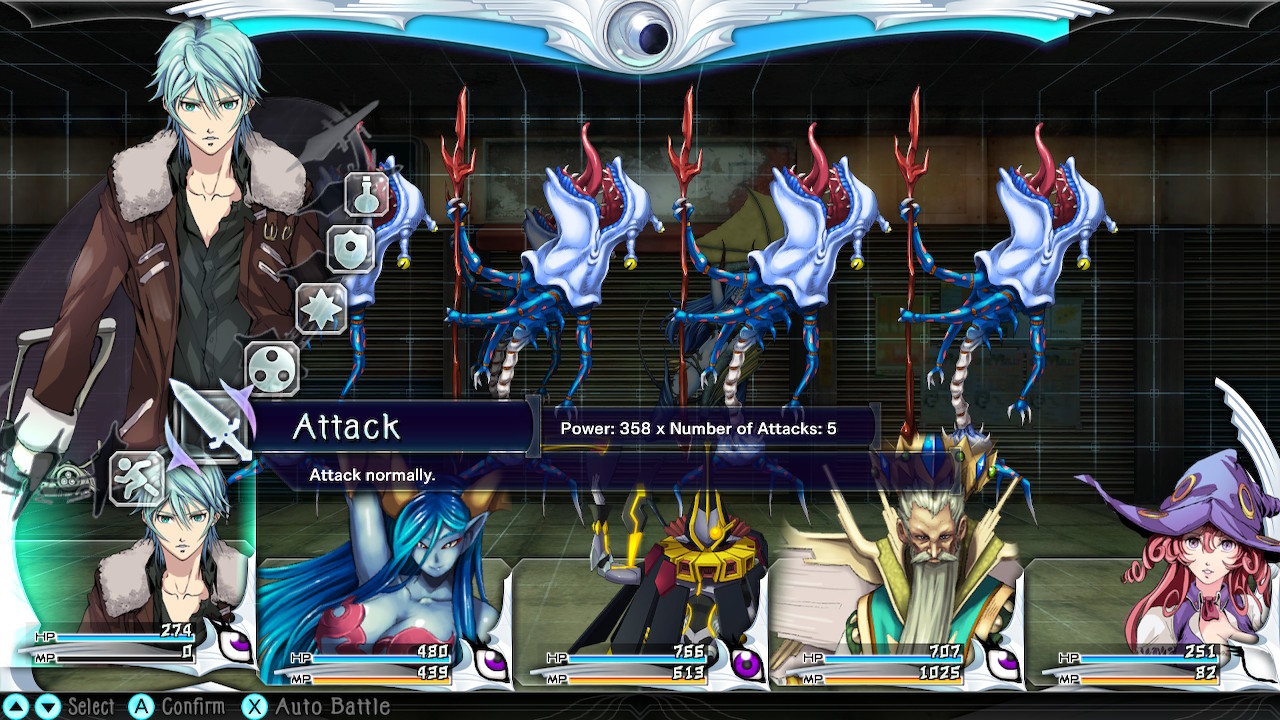 Spiritual content: Your character works for an occult magazine that covers all the paranormal activity happening in the world. Magic and many false religious themes are featured in the story for The Lost Child. Demons and angels are brought up, but not pertaining to the true God and how angels would be portrayed in Christian belief.

Violence: During some of the still cutscenes, blood can be seen on some of the characters from battle. Gameplay involves attacking other Astrals (basically battle demons) and the violence on screen is not seen except for slashes and magic effects on the still character images.

Language: D*** and h*** are used a few times out of the context of Christianity.

Sexual content: Your angel companion Lua is especially revealing without actually showing any female anatomy. Many sexual themes are present in The Lost Child, with one lewd joke in particular consisting of using your finger to pleasure someone. Angels are over-sexualized, possibly to convey their perfect anatomical conditioning.

In The Lost Child, you play as an investigative journalist named Hayato, and until the story begins it seems as though you’re living a very ordinary life. You work for an occult magazine company with a lazy boss who still refers to you as a newbie even though you’ve been working there for years. When investigating a case of mysterious suicides in a subway, a black shadow tries to push you onto the tracks, but you’re saved by a woman who gives you a mysterious briefcase. 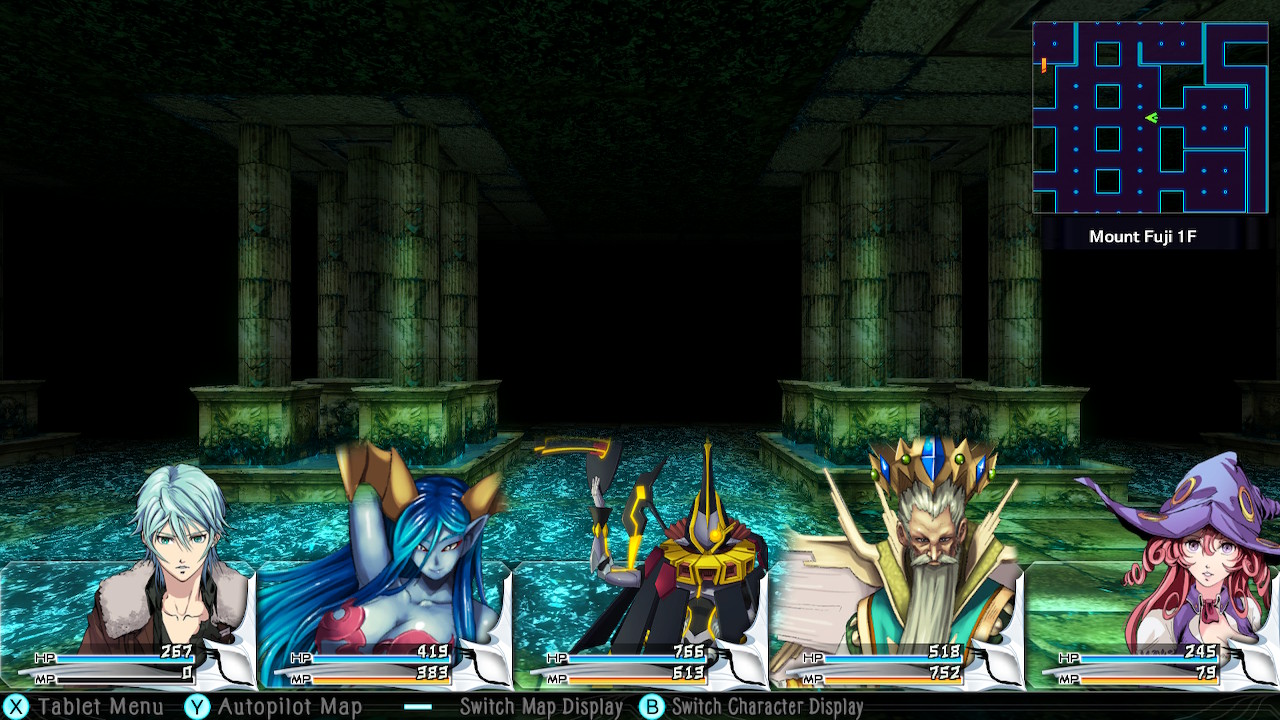 This briefcase contains a demon gun called a Gangour which you can use to capture demons for yourself and turn them to your side. After gaining this new ability, soon you meet another woman, Lua, who claims to be an Angel and tells you that you are “the Chosen One.” Together you will travel the country solving cases while capturing, growing, and defeating demons.

There is a lot to take in with the story and characters, but you eventually get into the game’s loop, which consists of receiving new cases given to you from your boss to go out in the world and solve. Each new case you’re given will unlock a new location on your map where you then travel there and talk to people without having any dialogue tree. All you can do is listen to their conversations, which in turn will open up new sections of the map; this continues for the duration of The Lost Child. While playing, I had opened investigations and didn’t even realize that I’d solved them until I got back to my desk and received a notification that it was completed.

The investigations are very linear and you’ll spend much of your time reading dialogue from different NPCs to flesh out a very cliche narrative. Since The Lost Child is mostly about the story, I wish it did more to stand out from an oversaturated genre of story-driven experiences. You can expect a fantastical story that gives unbelievable reasons as to why you must enter combat against the demons. Also, the unintuitive interface leaves much to be desired as far as quest tracking is concerned. 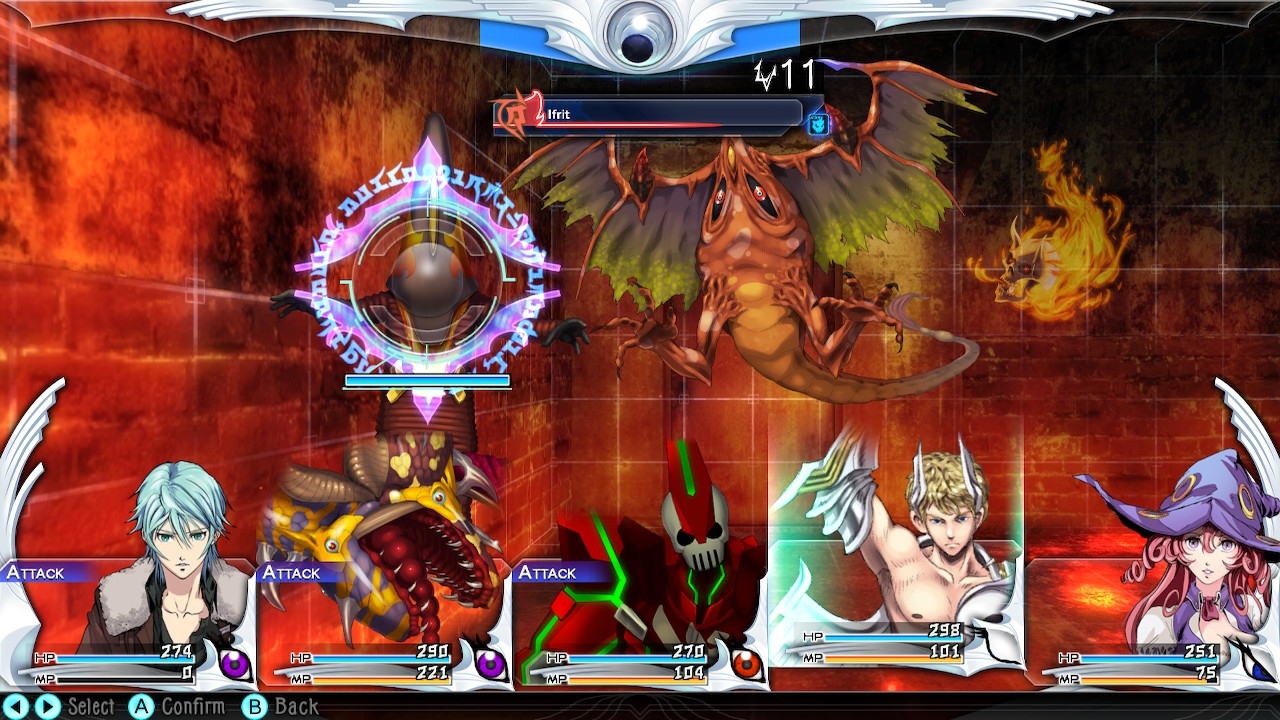 The main highlight of The Lost Child is the dungeon crawling. Each new section in the map that you unlock has a layer, and these layers build into multiple floors and clever shortcuts that you search throughout to find and capture new battle demons called Astrals. While you’re given a few Astrals to use in the beginning, you will find more along your journey and level them up to join you in battle.

Picking the Astrals who character designs I liked the best was my fun way to customize my team. The Astrals actually allow for a lot of customization options, and you can level them up with different amounts of karma that you collect along your journey. As they level up, they learn new skills, and once they learn these skills, you can trade skills between different Astrals to have a very strong skill based companion. I wish you could rename them, as to me, that adds a layer of involvement and personalization that makes each battle mean more as I have a stronger connection to them. 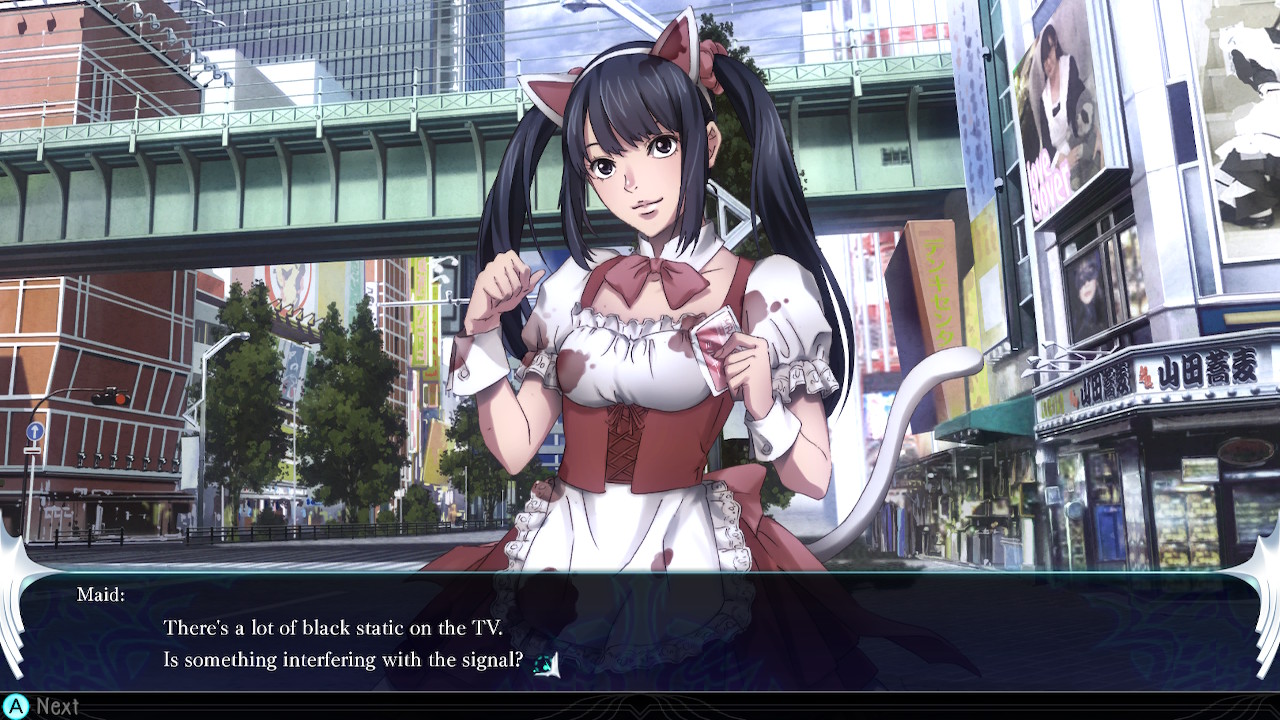 As you progress through the dungeon, you’ll delve deeper by going to lower floors. As you walk through the dungeon, you encounter Astral fights randomly and it becomes more of a challenge deeper you go. Running out of magic and hit points as you dive deeper into the pair becomes a survival mission as you want to complete the dungeon, but you may not have the skills to make it. If you decide to abort a mission, you have to carefully retrace your steps back to the magazine office to restore your HP and MP.

Navigating these dungeons is by far my favorite part of The Lost Child and can be a real challenge at times. Early on, you can auto-battle your way to victory, but that only lasts for a couple tutorial-like dungeons. I can, in particular, remember one demon that I barely defeated. Once defeated him, I turned a corner and was ambushed by two of the same super strong demons. Needless to say, my party of five did not survive.

The combat is turn-based and for as much of a tactical, turn-based gaming fan I am, the combat was lacking in a number of ways. First, gaining relatively strong Astrals right away allows you to win your battles with ease as soon as you begin. There is no real struggle that causes you to learn the mechanics and skills deeply enough. Getting a full team of three Astrals, Lua, and yourself doesn’t take long and defeating single enemies is incredibly easy. Only much later does the real challenge begin. 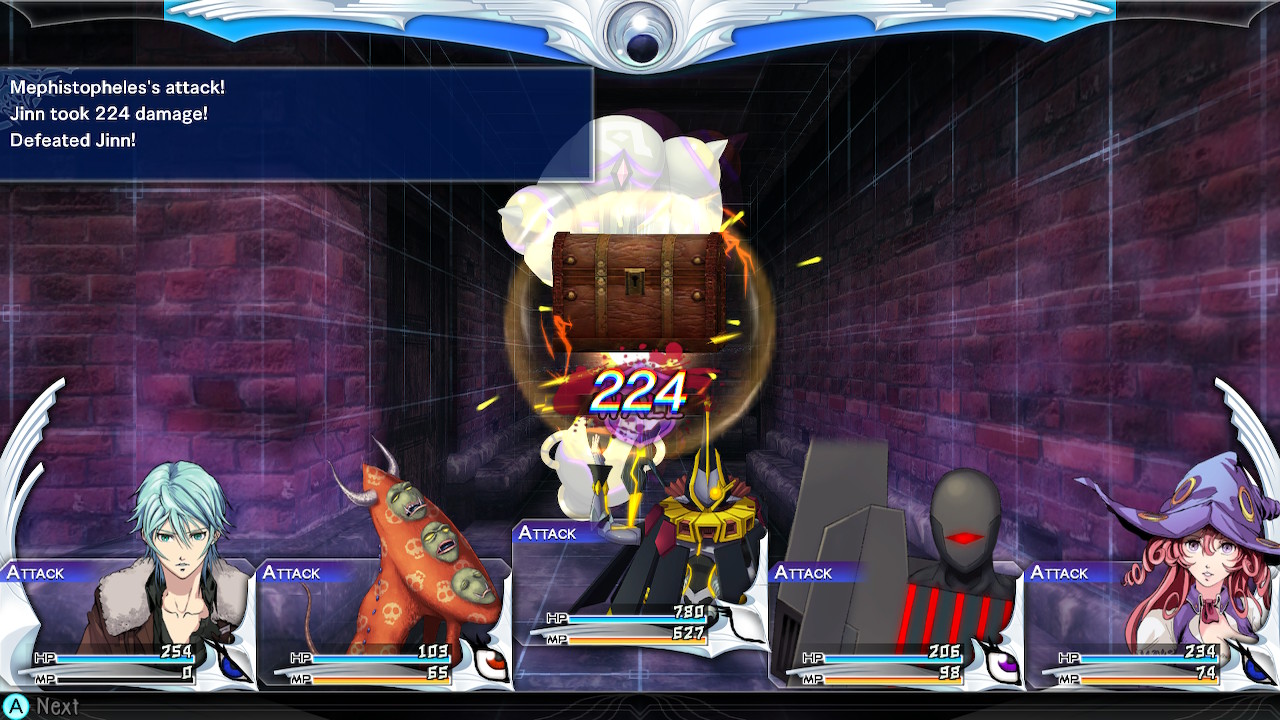 Furthermore, the battles feel stale, due to the lack of animation from the characters and Astrals in combat. After selecting what each member of the team will do, a quick flurry of attacks are exchanged between the sides and you’re selecting your actions again. I found myself choosing auto-battle frequently to escape the monotony.

Graphically, the art style of The Lost Child is a blend between 2D hand-drawn characters which are well designed, but even for anime lack movement. The 3D environments in particular look bland as you traverse them and moving is regulated to only four directions, like many old school dungeon crawlers. I thought the music worked well for the setting with some jazz and rock scores accompanying the adventuring and action. 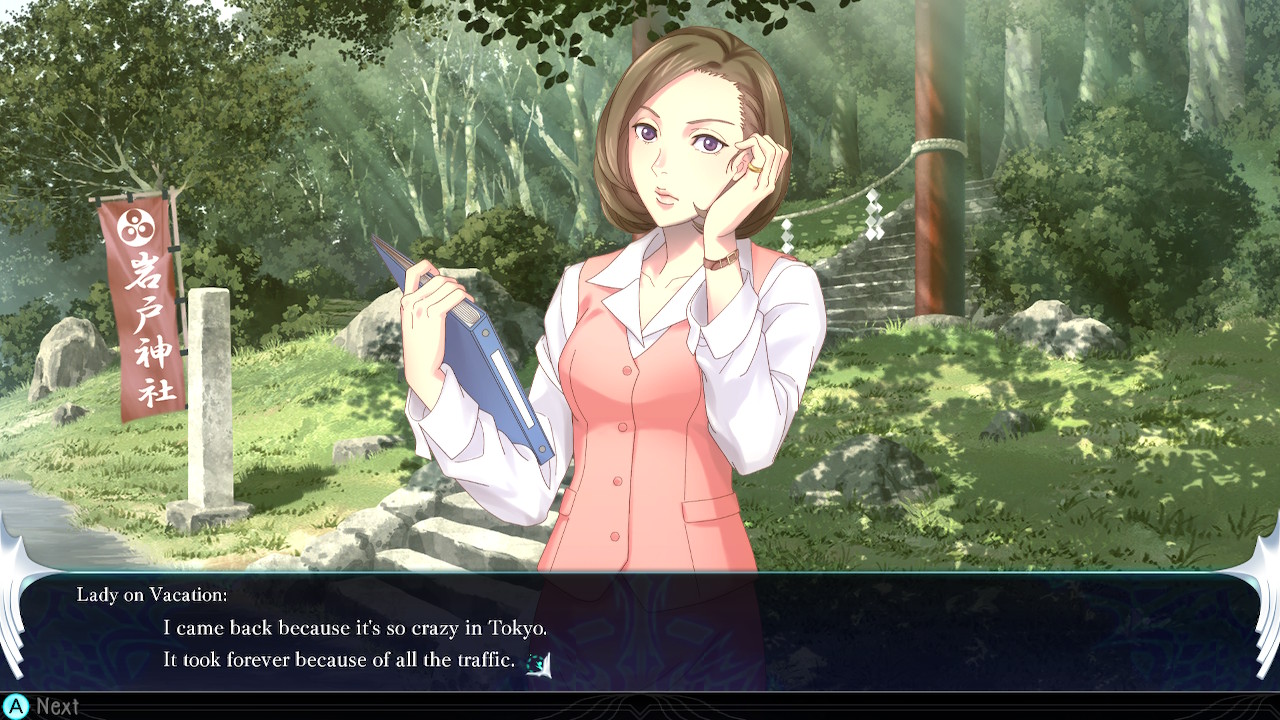 Overall, The Lost Child doesn’t do much of anything different to set it apart from the Pokémon-like collecting and RPG genre. It has too many weak points that need to be fleshed out in the combat, exploration, and world building. I did enjoy the monster-collecting aspect and dungeon crawling as they propelled the title forward, but the experience seemed awkward as a whole and the non-compelling story didn’t help.

The Lost Child is a solid dungeon crawler RPG that doesn’t innovate in many areas, but is still fun to play. The repetitive nature of combat and exploration is a shame, but the story should keep you interested to the end.