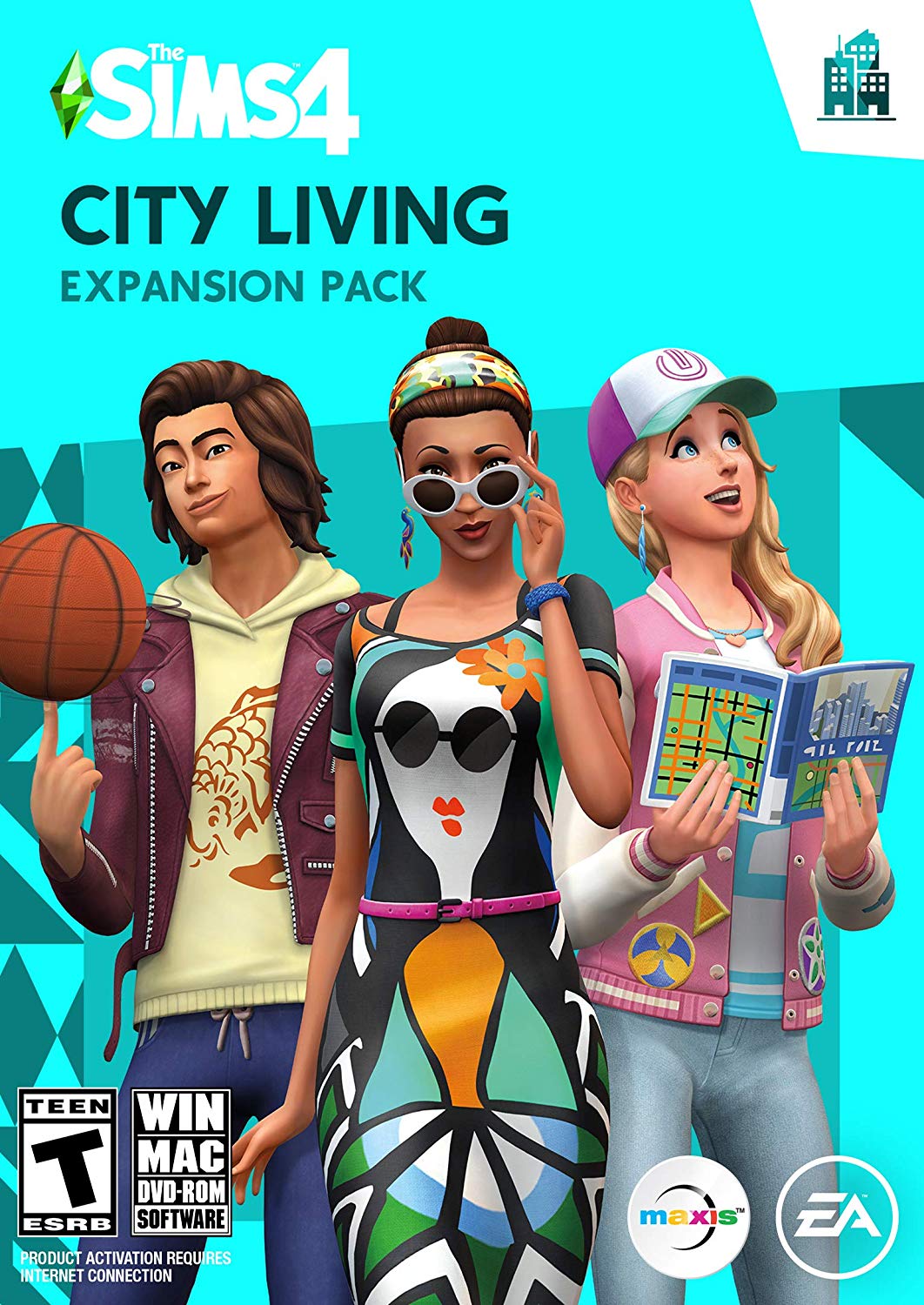 The Sims 4: City Living is an expansion pack in The Sims 4 series. It’s been out for a while, released in 2016, but it remains my favorite expansions due to the content, charm, and creativity of this pack. I can honestly say that I would never go back to The Sims 4 without this pack. 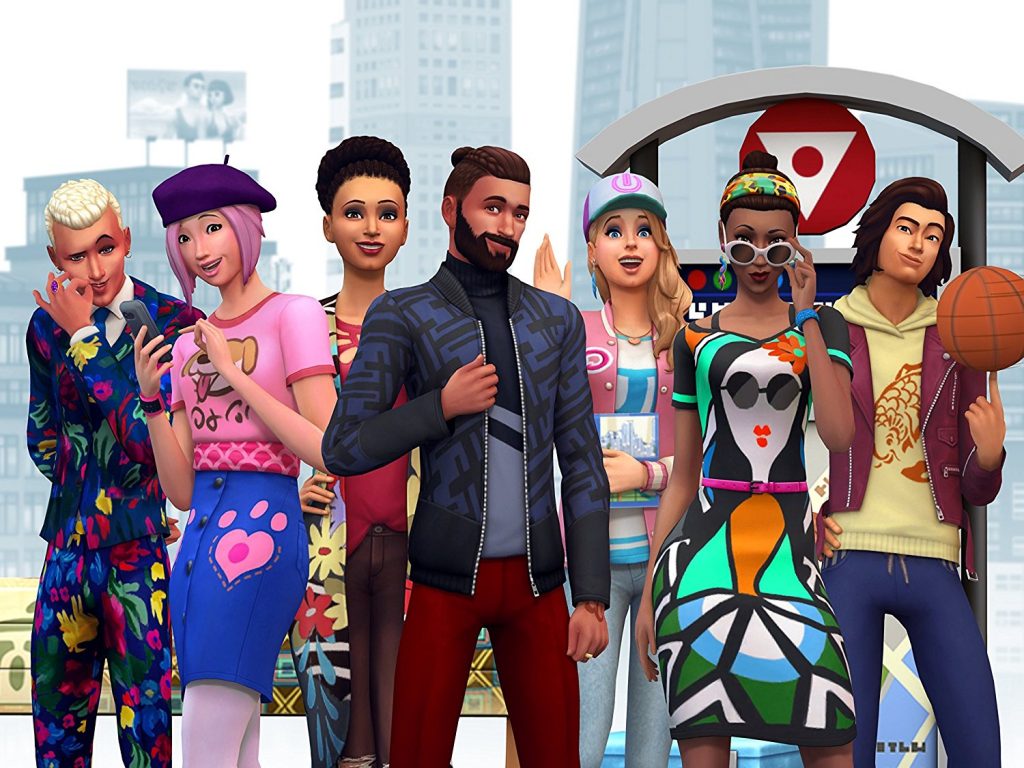 The Sims 4: City Living adds so much gameplay, content, characters, and possibilities that I could never play The Sims 4 without it.

The Sims has sex called “woohoo” in it. You never see anything, only some making out and hearts floating around, but it’s suggested.

The Sims calls drinks “juice”, but drinking will impact a sim’s mood. So even if they don’t call it alcohol, it acts like it. There are also bubble blowers that act like you’re smoking something, but aren’t labeled as a drug. 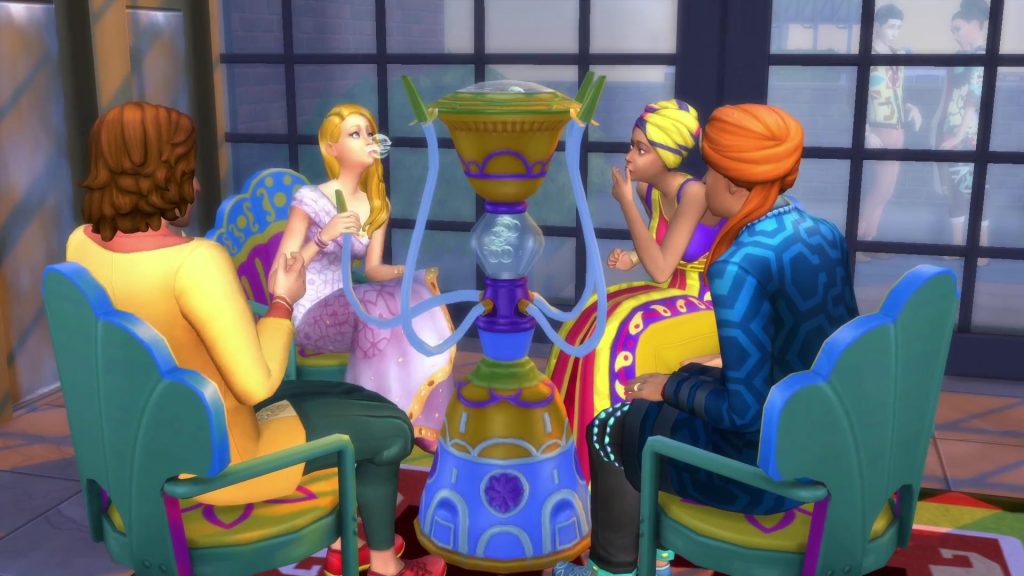 The bubble bar mirrors real-life hookah but isn’t labeled as a drug in The Sims.

The Sims 4: City Living remains one of my favorite expansions and if asked to give all up but one, I would keep this one. I admit that The Sims 4 was severely lacking before this expansion, but in my very biased opinion, City Living saved the game for me.Nine times out of ten, it’s the character, city, and content of City Living that I pick over anything else. Maybe it’s the hustle and bustle of the city, maybe it’s the global aesthetics, maybe it’s that the world just feels alive in this pack—regardless, I love this pack.

One of the biggest and most obvious additions in City Living is the city of San Myshuno. The name itself speaks to the pack’s focus on global influences. The sims around town are a lot more colorful, have ethnic names, wear cultural clothes, and eat more diverse cuisines. This injection of cultures is more than welcome and adds more variety to the game, which I really enjoy. The new globally-inspired decor, cuisine, and clothing is also fascinating and adds to the appeal of the pack. It’s a way to be more realistic, but also add interest (unlike adding laundry, which has also happened for some reason). 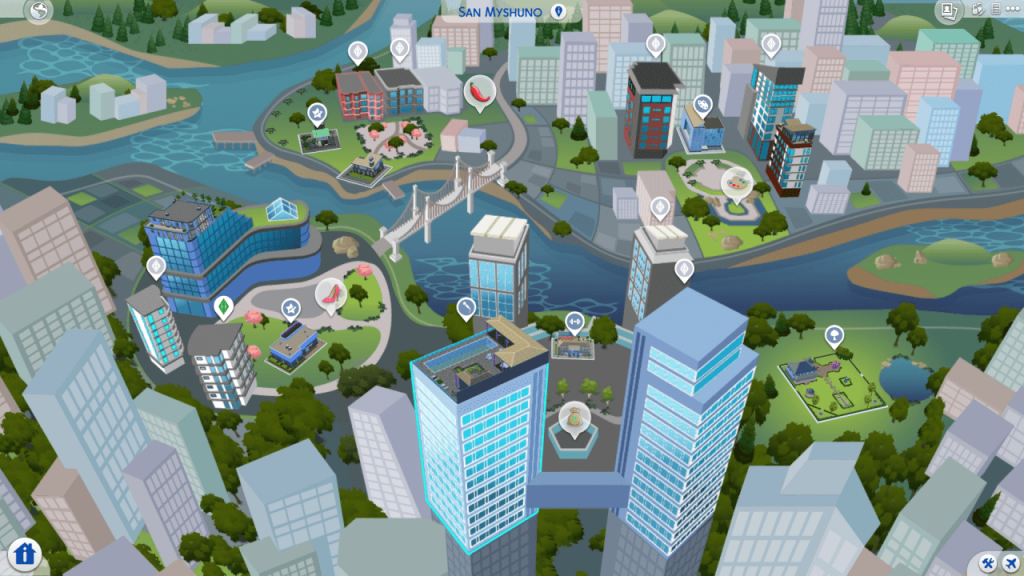 The city, people, and districts of San Myshuno make City Living such a fun experience.

Not only does the decor change with each district, but so do the lot’s traits which is another new element. Lot traits can be great, like higher fertility rates or helping plants grow, or they can be super annoying, like stuff constantly breaking or house ghosts. You can also apply lot traits to lots outside of San Myshuno, which adds to the character of different homes.

My favorite thing about apartments is how they compensate for The Sim 4‘s lack of open world in a way. Now you have neighbors only a door away, instead of a loading screen away. Even though you sacrifice having a backyard, each district has common areas that you can access from your apartment. Here, all your neighbors and passersby gather to play basketball, eat street food, play music, or just hang out until the wee hours of the night. These elements make playthroughs feel more alive and less closed-off, as other sims are only an elevator or door away. 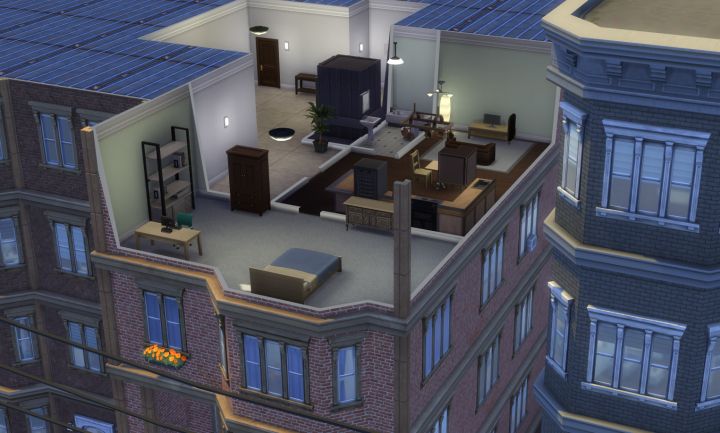 Apartments come in all shapes, sizes, and flavors from studios to high-rises and from dingy to beautiful.

Really, it’s the new mechanics of other sims in City Living that make it so appealing to players like me, because now, your sims can have living, breathing, social lives. City Living, combined with other packs like Get Together, make it where much of your sim’s lives can be up to in-game events rather than your control. This leads to some of my favorite moments in The Sims 4.

So, as will be customary when Sydney reviews The Sims, let me tell you a story. In my Discover University review, I told you the story of the Benali kids, but the Benali parents are actually the result of the City Living pack. I created my sim, aptly named “Sydney” as well, and moved her into an apartment. Within the first day, she bumped into her new neighbor, Salim Benali, a featured new sim in City Living. She also ate all her meals in the district’s common area, meeting strangers who’d one day be her roommates and friends. 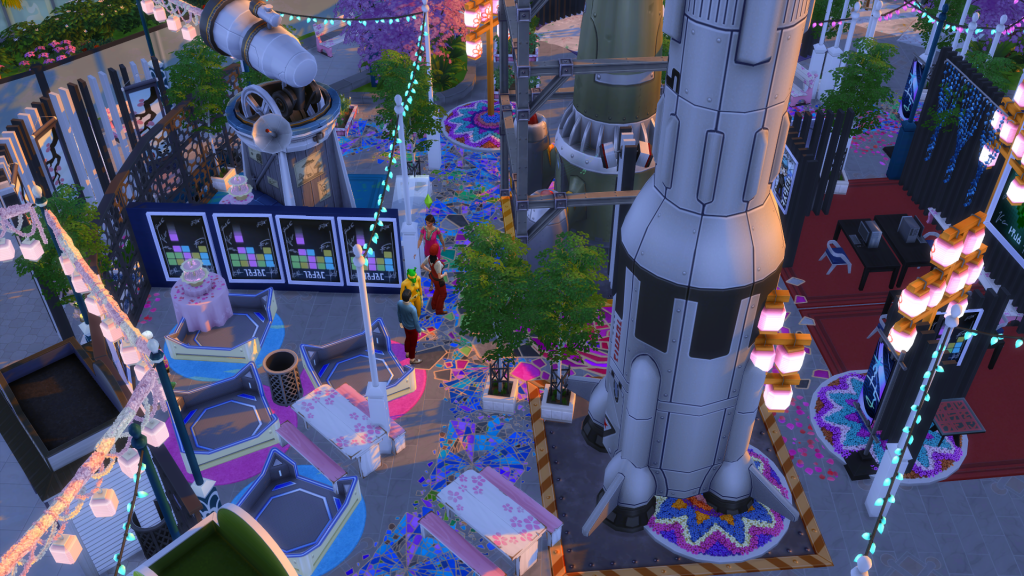 Playing her felt natural and meeting people felt seamless. Even though she started out completely alone, my sim soon had one roommate, then another, and then another. Her apartment turned into an episode of Friends with drama, dating hijinks, and going out all the time. It felt like having a real life with real friends doing real things. She gave out apartment keys, so her friends would hang out all the time and go to new festivals together.

Her and all her roommates eventually settled down, married people, and moved to their own apartments and districts. However, all these additions and features of City Living made this playthrough so rewarding, unexpected, and enjoyable. I’m still playing these people as they get older and watch their own kids make it or break it in San Myshuno. Am I overly attached? Yes. 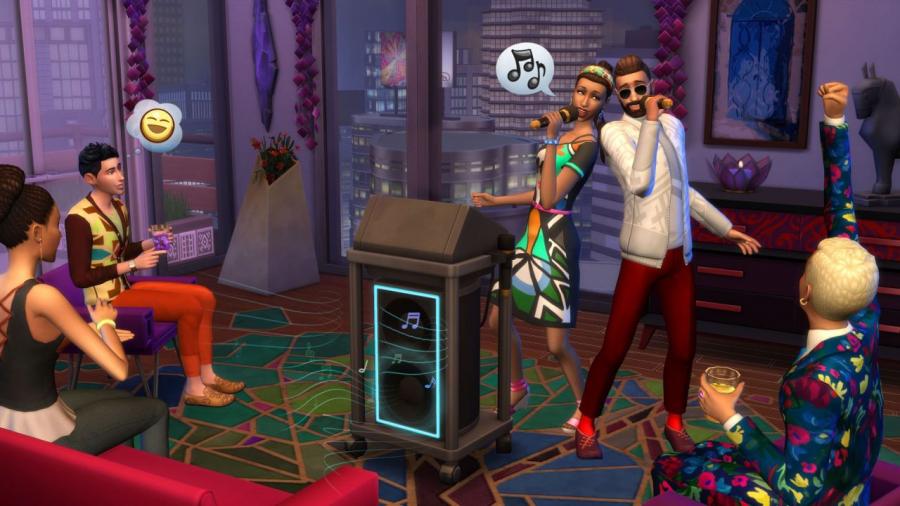 New places like karaoke bars or karaoke at home allow Sims to have fun together, develop relationships, and hone their singing skill.

Other additions in City Living include careers such as Social Media, Blogger, or Politician, which only add to the communal and modern feel of the expansion. Festivals also add new content and allow you to celebrate different aspects of The Sims 4 such as romance, mischief, geekdom, and cuisine. There are also new karaoke bars and fun activities like basketball, playing with game consoles, and street art that bring new experiences into the game. These give your sims new and exciting opportunities to enjoy San Myshuno’s community and enhance elements already in the game.

The Sims 4: City Living brings The Sims 4 to life, especially modern and global life. It brings diversity, community, and creativity into the game that is desperately needed and deeply appreciated. If you miss open world elements of The Sims 3, purchase this pack and it will help a bit. If you want more variety and realistic charm, get this pack. I don’t think there’s a Simmer out there that won’t find something interesting in this pack.

Creative, content-heavy, and realistic, The Sims 4: City Living expansion pack is my all-time favorite expansion and saved The Sims 4 for me.