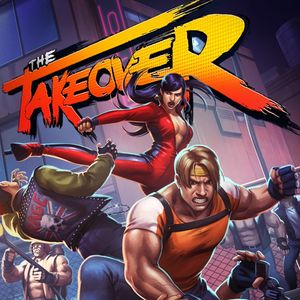 One thing that I always did as a kid while on vacation was try to find an arcade machine, and there was usually at least one or two wherever my family went. When I found a game like Final Fight I was really excited because I liked beat’em up games. When I played The Takeover I was immediately transported back to those days when I would play Final Fight not just because The Takeover is also a beat’em up game, but also because it is heavily influenced by Final Fight in play style and aesthetic. The Takeover blends a lot of the best parts of beat’em up games along with the insane, over the top action of an 80’s action movie to make it a thrilling joyride of a game.

The Takeover receives a T for Teen rating from the ESRB for violence and suggestive characters. Beat’em up games contain a lot of physical violence—as the name implies, most of these games are about beating up all the enemies. The enemies in The Takeover include both men and women, and the violence toward the female minions is one of its most questionable parts. The heroes kick and punch through most of the game, but they also have firearms and other melee weapons which they can use. The gore in the game is minimal when the enemies get hit or knocked out. There are some pools of blood that are left behind sometimes, but that’s it. The other questionable part of the content is the way that the female characters are dressed. None of the female characters are nude, but the clothing is tight and revealing. I would recommend this game for teens and adults. 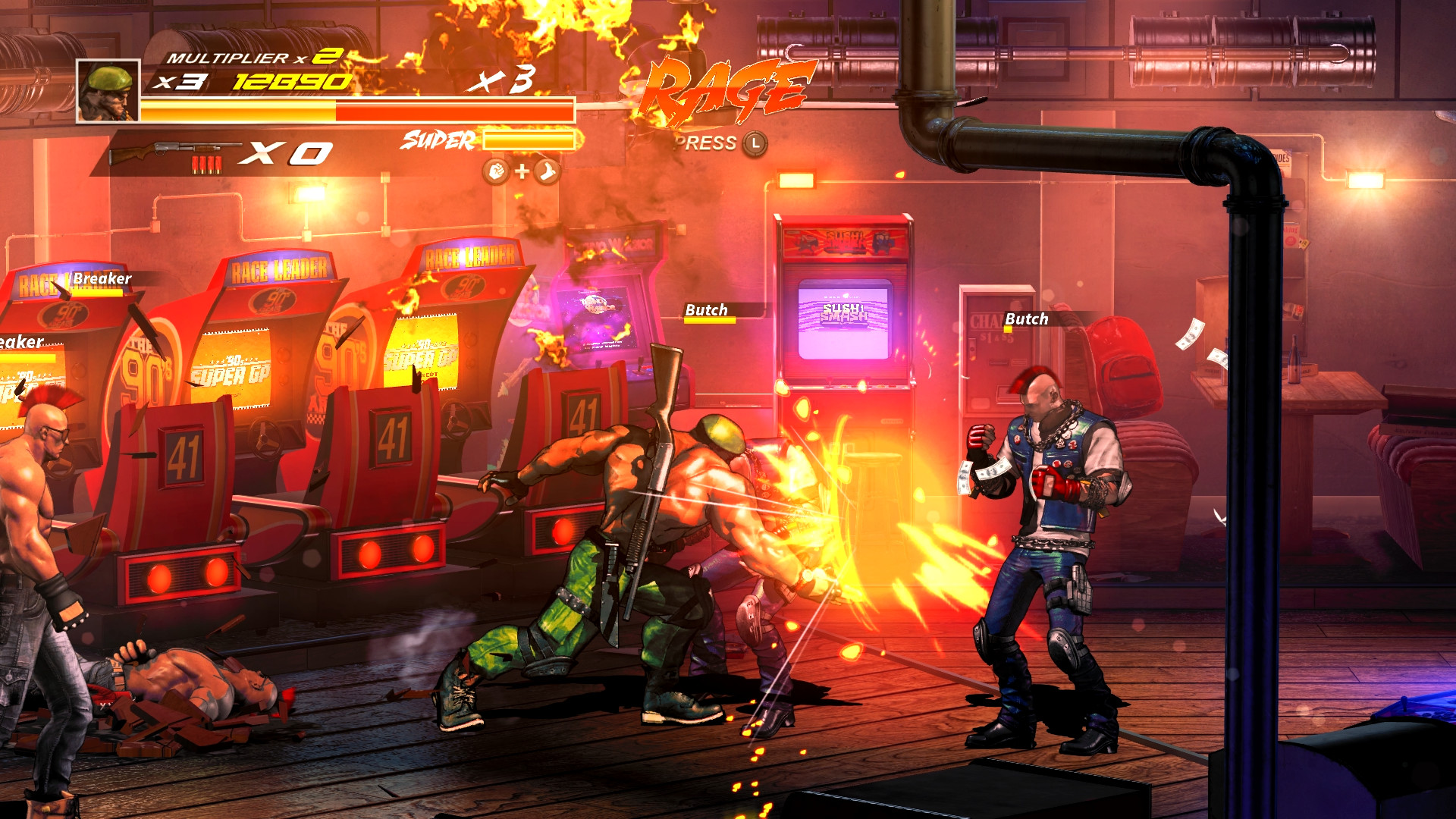 The Takeover starts out in a traditional beat’em up way with a cityscape and text crawl that explains that the city is being taken over by gangs unified under one powerful leader, and the only hope for the city rests in our heroes Connor, Ethan, and Megan. After the text introduction, the art style of the game switches to a cel-shaded narrative comic that shows Megan coming home to find that her adopted daughter, who she’s raising with Ethan, has been kidnapped. Voice over acting accompanies the cel-shaded cutscenes throughout the game which is a surprise as indie games don’t always have that much voice acting. I like the cel-shaded cutscenes, but I wish that the developer would have been able to use cel shading in the gameplay. 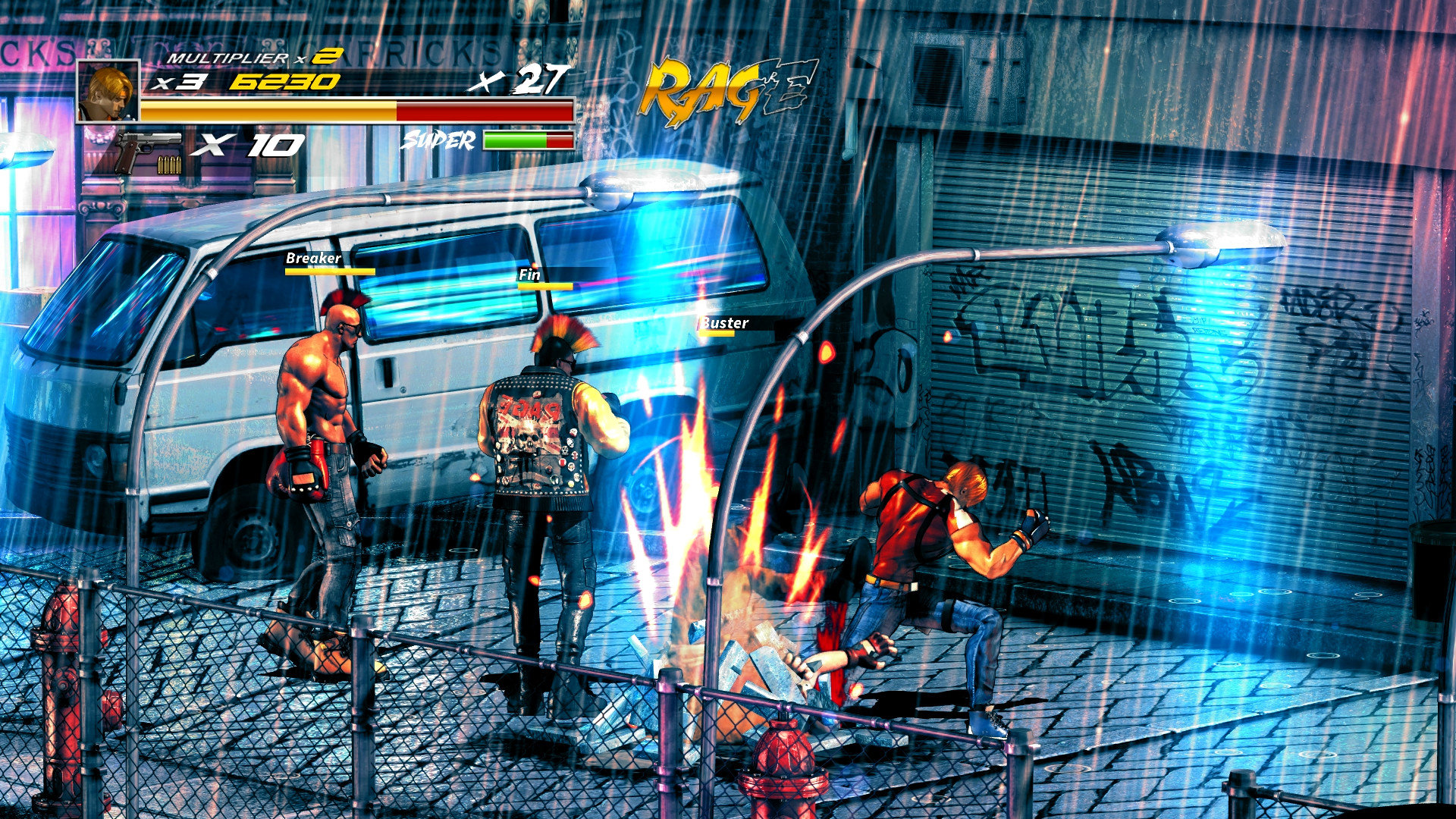 As for the gameplay visuals, The Takeover looks great with 3D graphics with a variety of environments such as city streets, industrial areas, and jungles. I can see a lot of Final Fight and Street Fighter influence in the playable character design and the enemies throughout the game. Ethan and Connor look and play very similar to Cody and Mike Hagger, and the game is filled with familiar-looking mohawk-wearing punks as well as sumo wrestlers who look like E Honda. The gameplay runs very smoothly even when the screen is full of explosions and tons of enemies. Each of the heroes has a unique fighting style which is fun to watch.

The Takeover includes a tutorial level that players can try out before they jump into the game which really helped me learn the combos. The game builds upon the simple punch and kick controls, which a lot of beat’em up games already feature, with some combos that allow the player to send enemies up into the air or smash them into the ground. The Takeover also contains several special powers that all the heroes can use when the bar builds up enough energy. All the characters have an area effect power that knocks down all the enemies on the screen, a rage power that boosts attacks and temporarily makes the hero invulnerable, and a gun they can use if they pick up ammo. I am not sure that I’ve played another beat’em up game with so many powers. Keeping track of the three gauges for each power felt too distracting for a game meant to be fast-paced. The powers added fun to the gameplay, but the heroes felt overpowered at times. 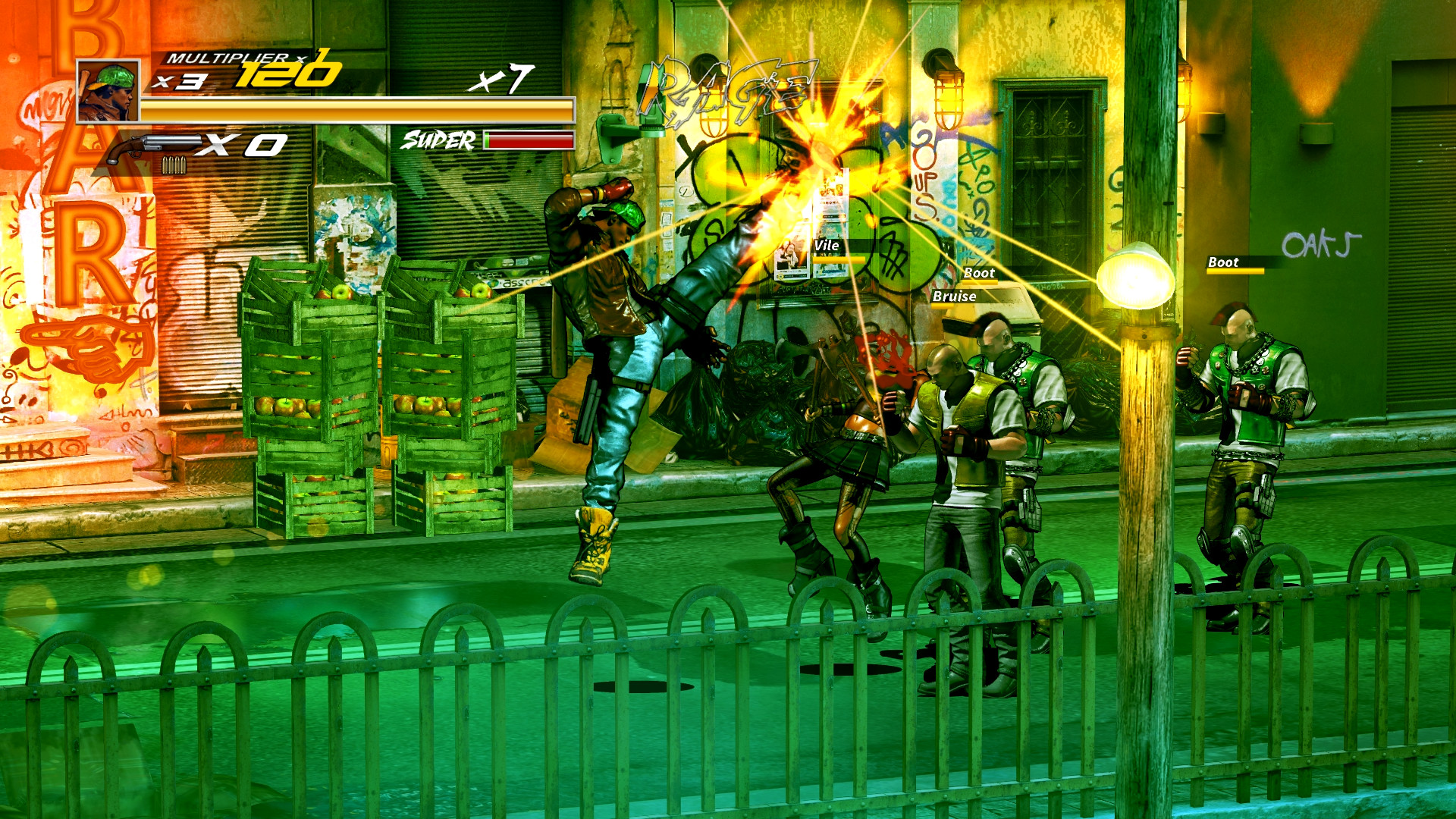 Interestingly, some of The Takeover‘s unique levels call back to other retro games. One of the levels takes place during a car chase that reminded me of the Roadblasters. The heroes are racing through city streets while blasting enemy vans and jumping over car carrier trucks. The second such level in the game occurs when the heroes take a jet which leads into a level that calls back to Afterburner. Even though both of these levels involve very different gameplay, it helps break up the beat’em up levels and keep the whole game from getting repetitive. 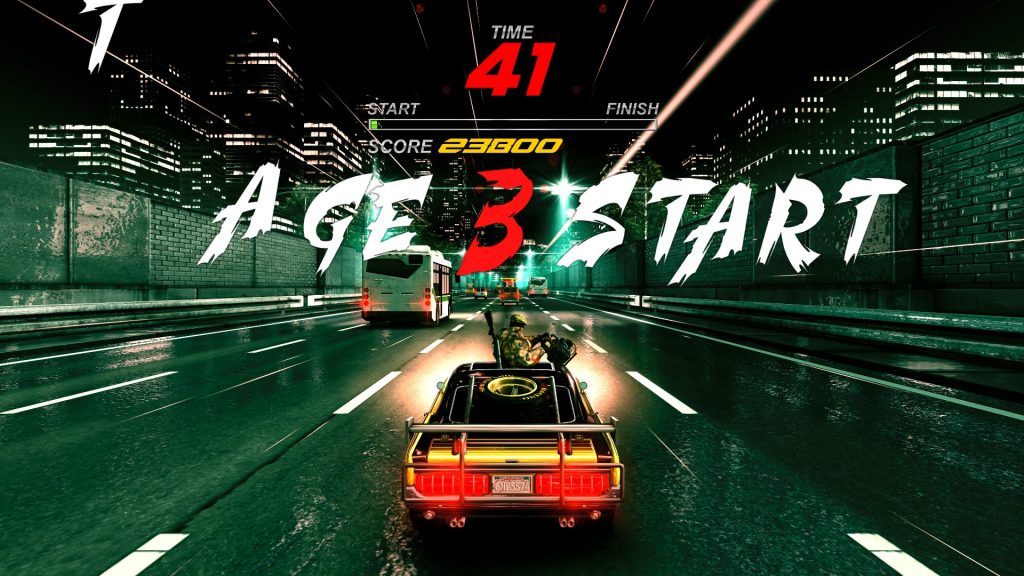 After the first playthrough, a challenge mode unlocks which rewards the player for playing without powers, although the powers themselves are not turned off. There is a survival mode that unlocks where the player can select an arena based on different game levels. The player battles enemies in the arena with only one life to knock out as many enemies as possible. Another hero, Jackson, also gets unlocked after the first playthrough, and there is a relay mode that unlocks after another playthrough. 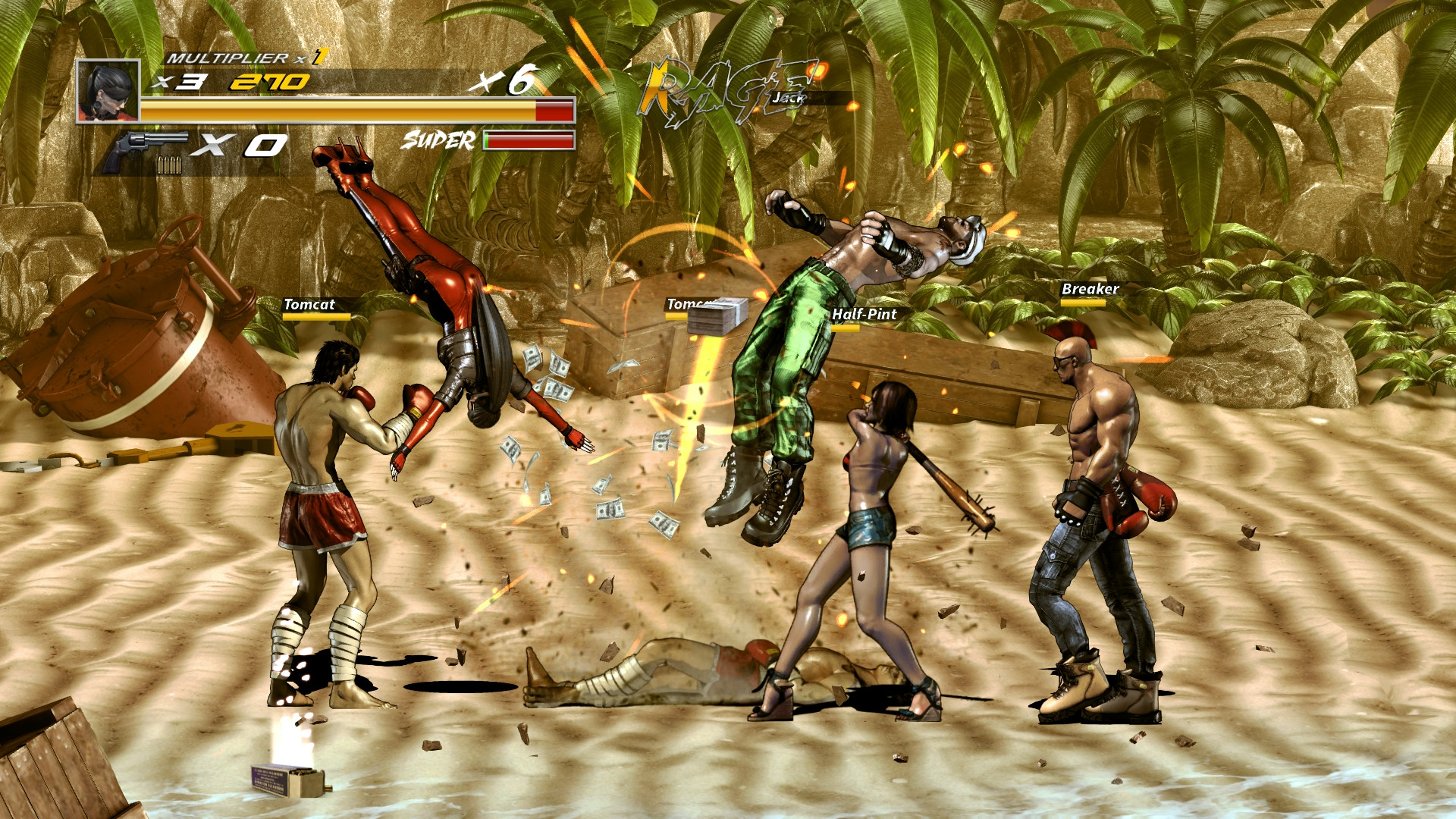 The game has a lot of great features and gameplay, but it’s held back in that it doesn’t do anything original or new. The game borrows so much from games like Final Fight and Street Fighter that it can feel like an unoriginal copy more than a nostalgic take on a game. The graphics look great, but they are clearly last generation and dated. As I stated previously the game switches between cel shading and computer-generated animation, which is a shame since keeping the cel-shaded look for gameplay would have better connected it with the cutscenes.

Still, The Takeover is really a good game despite the drawbacks. It feels like an action movie I watched on a Saturday afternoon cable channel, and I had a lot of fun playing it because of its great beat’em up gameplay. I would recommend picking it up just to play in-between longer or more complex games.

Despite some drawbacks, The Takeover offers entertaining beat'em up gameplay with an '80s action movie vibe.