The Witness is called to the stand

After the satisfaction of completing my Return of the Obra Dinn review and playthrough, I felt pretty clever. I felt like I could take on any puzzle thrown at me and solve it with ease. So, I downloaded the critically-acclaimed puzzle adventure, The Witness, to see just how good it really was. I figured that I would be able to enjoy and complete it in no time. Read on to see just how wrong I was in that assumption.

Alcohol Reference: The ESRB mentions an alcohol reference, although I have never personally seen it. This game is rated E for Everyone.

A bit of tunnel vision

I woke up in a tunnel. There weren’t any words or introduction, only a prompt on the screen to use WASD or arrow keys to move forward. Okay, so it was starting simple. I progressed forward, found and opened my first puzzle-locked door, and eventually made it outside. When outside, I quickly realized that everything looks bright and pretty. There were doors and panels all around me, but only a few were lit. I was trapped in what seemed to be a small fortress of some sort, with no way out besides to solve the puzzles. It didn’t take me long to solve them, but even so early in the game, something felt off. It just felt so dry. I hope: “This isn’t all there is to the gameplay, is it?”

Regardless, once I finally opened the fortress door, I went on my merry way, trying to find something relevant and helpful to my playthrough. A bit of lore, a story, a cutscene, anything. But, it was to no avail. It seemed I was expected to stumble along pointlessly in hopes of finding something that made some sense to my struggles.

After I left the fortress area, I immediately came across more light panels. But this time, there were strange symbols on the puzzle blocks I hadn’t seen before. There weren’t any tutorials stating what to do, no signs or words. Eventually, I scratched together my solution through trial and error. As I kept playing, I kept needing to do just that—rely on trial and error. If it was too complicated, I had to leave and hope I got an “aha” moment, else I would be stuck. 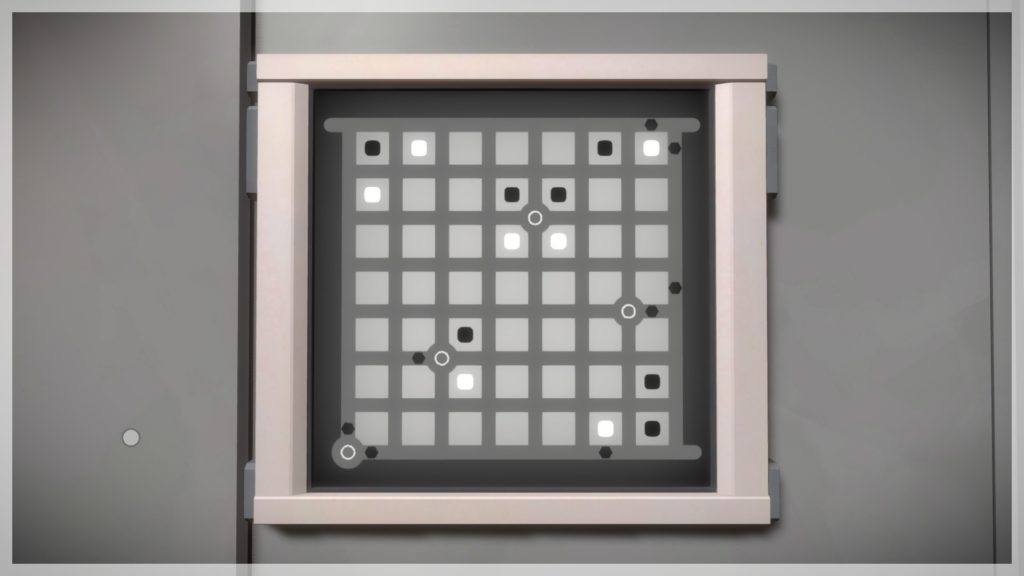 The puzzles vary in difficulty. This one is probably about mid-range.

This severely irritated me, and still does. I can understand being expected to deduce how to solve a puzzle. However, it feels cheap to be just thrown into a world and shown a puzzle, just to not be able to solve it. It’s like someone coming up to you on the street saying “Here, solve this! Oh but first, you have to walk a block and a half away to see how it actually works,” when they could have said how it works from the get-go. It doesn’t feel natural, and just led me to constantly have a conflict with myself: “Can I solve this here, or do I need to walk away again? And will I remember where it is if I do?”

It wasn’t until I finally looked up these questions that I realized each puzzle segment technically has a “tutorial,” or rather, a series of puzzles with special marks designed to help me piece together an area’s puzzle solutions. However, they could be anywhere, even on the opposite side of the island. Not only is going back and forth a hassle, but remembering where the puzzle even is could be a challenge. A journal, map, or objective tracker is an asset sorely missed in this game.

It turns out that that is the premise of the puzzles in The Witness. All puzzles deal with making paths and circuits with light, just in different variations. In some, you must isolate certain colors from other colors. In others, you must collect dots, kind of like a Pac-Man puzzle. There were even floor puzzles like from a handheld Zelda game. Once I finally understood how puzzles worked, they were often very satisfying and not too difficult to solve. In all honesty, The Witness’s puzzles are its greatest feature I’ve seen… I just wish that they weren’t designed to play hard-to-get.

Over Hill, Over Dale

The Witness’s other main strong point is in its capacity for exploration. Even without solving an area’s puzzles (which lead to doors opening and such), one can walk through forests and glens and admire the island’s beauty. The view from on top of the mountain’s island is incredible. And, while it might not be enough to keep players going in the long run, the satisfaction of opening doors to explore new areas is worth mentioning.

There’s a lot of interesting things to see around the island, like this “shady individual.”

However, there are some areas in The Witness which are a little more complex than others. Moving platforms, winding staircases, elevators, and switches allow for geographical variety in different zones. I don’t have a problem with any of that. But I do have a problem with player boundaries. Complicated areas are a hassle to navigate once puzzles are solved, because the pathways are severely linear. I can’t jump over a fence to a puzzle I’ve already solved. Worse, I can’t fall through holes, even though I recognize the solid ground underneath. Instead. I have to detour through a number of solved puzzles and pathways, just to get somewhere I could have been in half a second.

When games don’t have these modern standards of movement, it feels severely limiting, restricting, and in certain cases, suffocating.

One of my biggest gripes about The Witness e is its lack of music. I don’t expect Beethoven, but something simple at least to help me focus. Soft piano would have been an excellent choice, or having musical themes vary by location. Even if the music was bland, I would be okay with it if I could turn it off. But not having it at all just feels lazy.

“Hello! Do you have a second to talk about our Lord and Savior Jesus Christ?”

Regardless, having no music does have a hidden blessing behind it. The sounds of the ambience are much more apparent without the extra noise, and I sometimes like the atmosphere it brings. Hearing the low hum of the puzzle terminals was sensational for the first fifteen minutes of me trying to solve them. Then it slowly drove me insane. I ended up starting to play my own music outside the game just to try and keep myself engaged.

In the Eye of the Beholder

It may already be obvious that I don’t agree with what most reviews say of The Witness. And, truth be told, I’ve debated on whether I could justifiably critique a game in which I just can’t seem to understand the attraction to it. I talked about it with some friends, who gave me a very good perspective. I was told about what I was missing, when I never progressed far enough to unlock some major reveals. This alone would have inspired me to keep playing, but then I figured out I had a long way to go before the reveal. When I combined that thought with the fact I had already solved 144 out of 650 puzzles, and still haven’t earned anything to make sense of anything, I decided I could not keep putting up with the headaches this game presented me. Keep in mind that over the past year, this is the only game for review I’ve had to quit playing before at least completing its story.

Though The Witness may reveal it’s “genius” eventually, this comes way too late. I’m reviewing this so that others don’t purchase it and experience the same disappointment I have. I do not believe this game to be good; it feels like a half step between a simple mobile puzzle game, and an actual adventure for console/PC. There are many more open and fun games you can buy with forty dollars.

Though The Witness has been given perfect review scores by major review sites, I do not understand its appeal. Everything feels like a chore to do, and while the colors, exploration, and puzzles are great, I feel they all come with a consequence of some sort. The Witness struggles to come up with positives, while it’s negatives are glaring in my eyes.

While others may chalk this game up to be a masterpiece, I find The Witness to be a headache—in more ways than one.