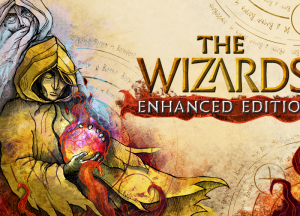 2017’s Mages of Mystralia a fond place in my heart; not only do I consider it a 2017 GOTY runner-up, but it also features the video game soundtrack that year. Interestingly enough, Carbon Studio published their VR version of spellcasting, The Wizards on Steam Early Access late July that same year. After adding an arena mode, free movement (an early build of the game limited movement to specific teleportation spots), The Wizards would exit Early Access seven months later. Combined with a host of mechanics and graphical improvements, Carbon Studio re-branded the game as The Wizards—Enhanced Edition, and would port the game from PC-only VR to PS VR.

In fact, as of August 13, 2019, it is possible to own a physical copy of The Wizards—Enhanced Edition on PS VR for $29.99, from retailers like GameStop, Amazon, or Best Buy. This review, however, is based upon the Oculus Rift version of the game.

I played through this whole game not knowing that I could toss the shield, spell, Captain America style, until I was looking through press kit materials. Now I need to get my Hawkeye/Cap gameplay on!

This is a rare instance, but I disagree with the ESRB’s T for Teen rating. The Wizards is an “E for Everyone” type of game. This game features no blood, no profanity, no drugs, no sex. Even the violence is tame, though I suspect the game earned its T rating from enemies who are frozen, set on fire, or electrocuted depending on the spell used. Yet cartoons I grew up watching like Tom & Jerry are more violent than this game, let alone The Itchy and Scratchy Show on The Simpsons. 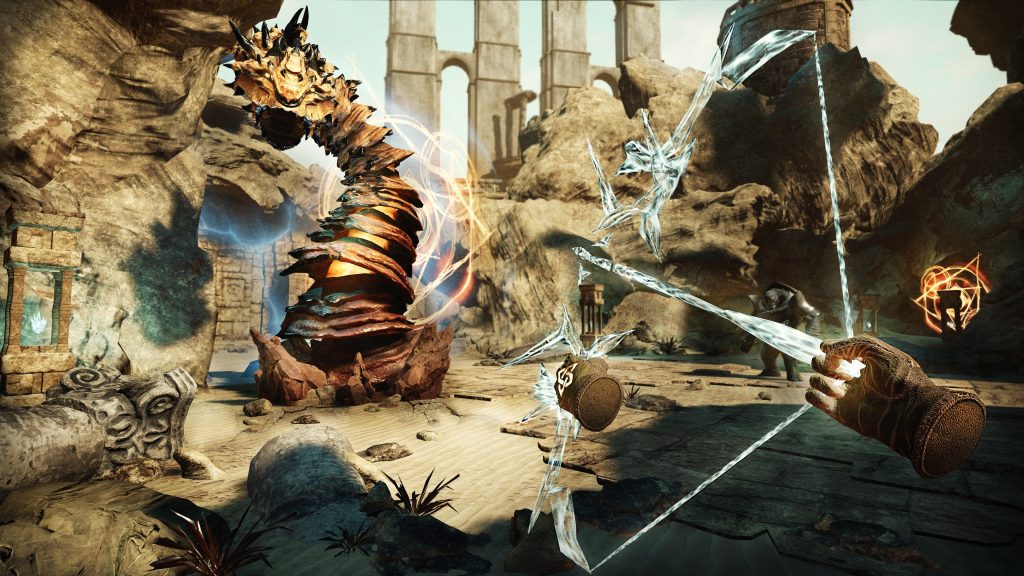 When I say “Hawkeye/Cap” game on, I mean it! Here, crossing my arms like a Power Ranger casts the ice bow spell. Reaching behind my back for arrows, The Wizards is generous with nocking, and even more generous with aiming.

Yes, The Wizards features a campaign mode, and there is a story, but I find it perfunctory. Warp through time and space to find a way to thwart the orcish army. It is a simple premise, but what I appreciate most about the campaign, or rather, how it is presented through The Wizards‘ UI is its neat arrangement. As one progresses through the game, the three map layouts of ruin, dungeon, and desert are placed on a level selection map, indicating completion percentages at a glance—more on that shortly.

To the left of the main hub world is the spellbook, where players can add new properties to the game’s six spells if they have done their due diligence of collecting enough gems with a practice realm within an arm’s reach of my left Oculus Touch. And I say “to my left” because I am right-handed, and I imagine that this game’s “lefty mode” would reverse the positioning of objects. Of course, I did not use lefty mode, but it is a neat feature that I thought worth mentioning in this day and age where accessibility in gaming is a boon. Additionally, this game can be played entirely while sitting down! 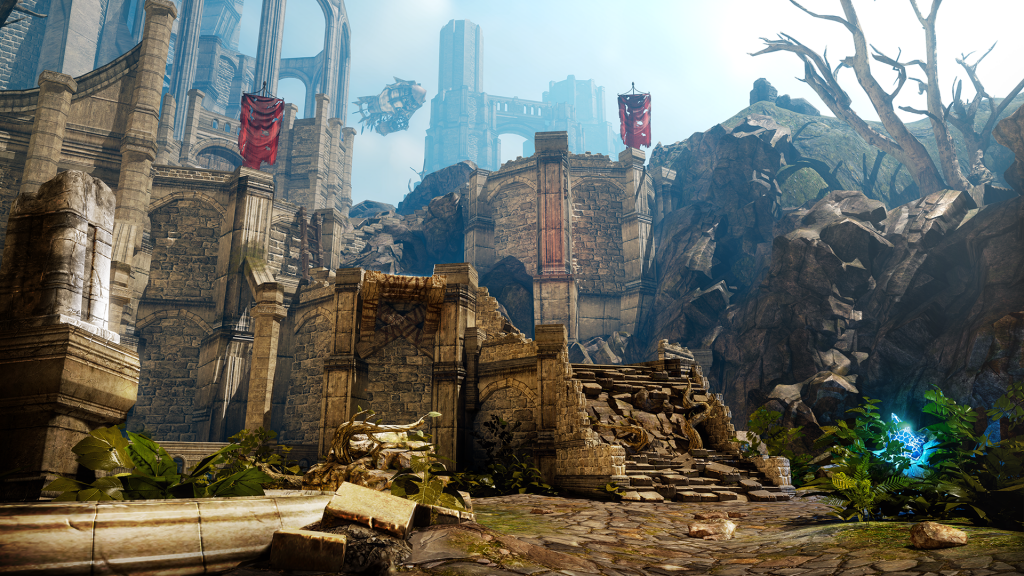 With the exception of the ground tiles, The Wizards is great to look at. As with most VR games, it is unfortunately linear.

Now for the highlight of The Wizards: the spells. Compliments to Carbon Studio, because the spell-flinging as Korgan Bloodaxe used to say, is where the game shines. Thankfully, the somatic gestures necessary to conjure a spell are not taxing in and of themselves. With a flick of the wrist, I can create the first spell, a fireball. The first levels were rough though, because I have not frequented a pitching motion in years, and my arm did get a little tired even though I lift, bro. Thankfully, the second spell, lighting, comes soon. I at first felt like Storm of the X-Men, casting with a double-fisted thrusting motion, but I longed for its ultimate form, which would allow me to separate my arms and point in different directions rather than one. The shield is a quaint spell, but it made me want to go back to Karnage Chronicles so that I could sword-and-board my way through the game (do check out the Swords and Sorcery VR Bundle, by the way). 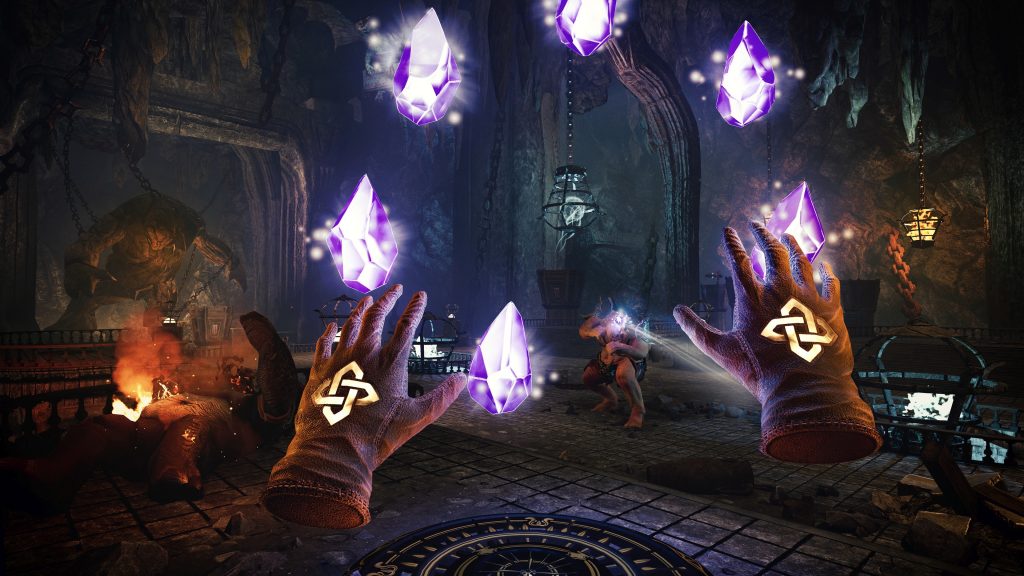 I wish I could find an animated .gif of the Arcane spell. Verily, it is one of the highlights of The Wizards.

My favorite spell, though, is the arcane spell. Magic Missle of D&D lore might be a low-level spell, but it is one of my all-time favorites, especially as animated in Neverwinter Nights. There is zero chance that the Arcane spell in The Wizards is not inspired by Magic Missile. Here, it is cast in a motion involving my hands drawing circles in opposite directions. Roughly a dozen crystals appear in the screen, whereupon touching them individually fires them off in an arc, homing into enemies wherever they happen to be in an encounter room. Carbon Studio must be aware of how awesome this spell is, because it is the only spell that has a cooldown, indicated by the revolving miniature crystals on my left wrist. 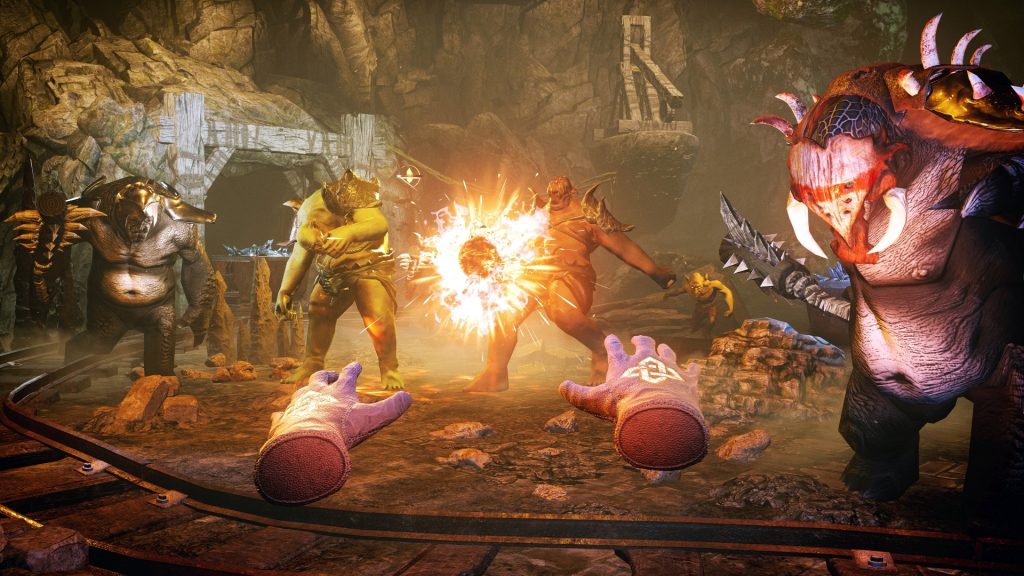 Enemies are surprisingly comprised of detailed textures. Carbon Studio likely saved resources on with the ground tiles. A note on lighting later.

Enemies are merely functional fodder for spells: small, but fast goblins, human-sized orcs, large ogres, orc magi, wraiths (third level only), a magic nullifier, and three bosses. Along with the impressively highly-detailed environments for VR, the textures of these foes are likewise pleasant to observe, smoothly animated. These enemies are pushovers, however, and I struggle to determine if I would have preferred more of a challenge since I never died throughout my entire playthrough, or if I enjoy being a powerful wizard. I lean toward the latter, and those like me who want to test their mettle can play arena mode where hordes of foes are infinite. But such a mode lacks even the infinitesimal substance of the campaign, and therefore, is a time sink promoted as increased replay value.

Finally, by “completion percentage,” I mean the power gems that one accumulates during gameplay. These gems signify mastery of The Wizards, with up to four being collectible in any given level; three can be earned through a scoring system, with the fourth attained by collecting three gem shards in the levels. However, even playing a level perfectly without taking damage may not earn the high-score gem. Herein lies the game’s meta, where replay value is not artificially driven like arena mode: enter the Fate Cards, which are also collectible secrets like gem shards. Fate Cards provide in-game modifiers such as increasing or decreasing enemy hit points. These conditions modify the score multiplier, where each player’s score is tracked on a global server, for those who wish to see where they rank. Of course, the higher the score, the more likely to earn that final power gem, each of which will be necessary for players who wish to max out their spellbooks.

Two things: A) I normally take lighting for granted in video games, expecting it rather than being wowed, but here in VR, the difference is plain. B) the fireblast spell makes me feel like Jeice of the Ginyu Force. FIREBALLLLLLLLLLLLLLL!!!

The Wizards—Enhanced Edition is one of the better VR games out on the market, particularly because of its focus on a single-player off-rails experience. I am grateful that I was given the opportunity to review it after the newer features were added, because  Carbon Studio’s additional polish shows. Those who desire to test their might and learn what it might feel like to be a real-life caster need to desire no longer, for this game is a good simulation.