From the makers of Maniac Mansion and The Secret of Monkey Island comes a nostalgic contribution to point-and-click adventures that takes place in 1987. Ron Gilbert and Gary Winnick teamed up to bring the gaming world a point-and-click for the modern age. Originally a kickstarter, Thimbleweed Park quickly gained traction and became a reality, much to the joy of fans of the old point-and-clicks. For the game, Gilbert had said that he wanted to make it with a feel from that of Twin Peaks, The X-Files, and True Detective. The game received so much support in that the original kickstarter goal was $325,000, but ultimately, made $626,250. 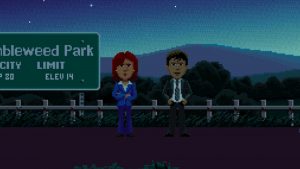 Why are two federal agents so interested in this case?

Spiritual Content: The game touches very much on spirituality, especially since one of the main characters is in fact a ghost who can interact with other ghosts. As a ghost, you can pass through walls and spook other people by pulling pranks. Also in the game, there is a woman who has an occult book store who can hex people and claims that there is power in witchcraft. She even lets the character have The Book of the Dead that allows communication with the dead. With this, the player is meant to use it in a “seckrit” room to be able to speak to Franklin, the ghost character. Another issue I found is that once you arrive to the room, you can see a pentagram on the floor—also known as a five-pointed star. Be aware that it is a common symbol used by those who practice Wicca. While the game might have meant it as a harmless representation of magic, it gives an eerie feeling when suddenly the candles light themselves and you are able to communicate with a dead person.

Violence: Thimbleweed Park is not too violent; the most it shows is a person being knocked out and another person zapped. It’s also a bit graphic in showing a pixelated dead body in the river. There is also blood in the game, but nothing gory or excessive.

Drug and Alcohol Use: There is light drug use in that Agent Ray is seen smoking a cigarette for the first part of the game, but he never does it again. There is a homeless man in Thimbleweed Park who is constantly drunk and asks for the players to buy him a drink.

Language: Other than a few uses of “goddamn,” there is a clown named Ransome in the game who constantly uses the word “f**k” and “s**t” but the game censors it every time. Even though it’s censored, it’s not hard to know exactly what the clown is saying. Be warned, he will say phrases like “*bleep* off!” or “*bleep* you then!” This is throughout the whole game whenever you take control of his character.

Positive Themes: The game has several strong positive themes, including a rude and careless clown who eventually desires to make things right with those around him and his past. He seeks to turn his demeanor around, and that is nothing short of repentance. Another character seeks to clear his father’s name from the unfair accusations made upon his family. He seeks justice for his deceased father and his family name. Another character desires to hug and hold his daughter, although he cannot since he is a ghost. The dynamic created with that tension is so well done that you see the lighthearted mood of the game change for just a moment, stirring up some emotion inside of the player. Another character seeks to build up enough guts to tell her uncle she does not seek a future in the company, but rather, desires to become a game designer. It takes her awhile, but she finally builds up enough courage to face her fear of rejection. 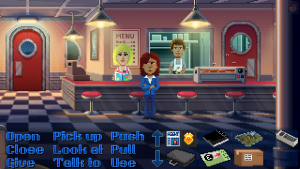 Whatever small the connection you think an item has with another item or a person, try it! You may be delightfully surprised.

A long time ago, there was an explosion of point-and-click adventures which stemmed from games like Indiana Jones and the Fate of Atlantis and The Secret of Monkey Island. Since that time, there have been few point-and-clicks quite like these that capture the spirit of the adventures. The endless hours of racking one’s head trying to figure out what to do next is all the joy of these types of games. It is this awesome mix of puzzles and story that made the point-and-click genre so popular in the past. It is a shame that these games seem to have become less popular in the mainstream , but Thimbleweed Park is a refreshing reminder of how good these games can be. 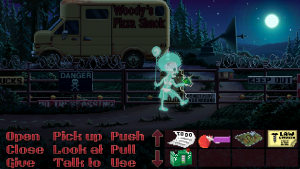 How do I supercharge this battery I’m holding? Hmm….

The game involves five characters: Agent Ray, Agent Reyes, Ransome the Clown, Franklin, and his daughter Delores. Each character has a specific goal, but the main goal is to break into the infamous pillow factory that was closed down years ago. Thimbleweed Park opens on a murder, and two federal agents, Ray and Reyes, appear unexpectedly on the scene. Neither know why the other is there, but they are willing to work together for the time being. For the sake of not spoiling the story I won’t go too much more into it, but I guarantee you the story is one of the strongest points of the game. There are witty moments, references to the 80’s, and character growth events that are worth playing through the game again.

The puzzles are all part of a game mechanic called “puzzle dependency.” This means that one puzzle leads to another, and some puzzles rely on others to be solved first before making any real progress. Puzzles are a great part about the game. They challenge the player in some of the most bizarre ways, and if you miss one or two things or if you forgot to visit a certain room or building, chances are you won’t be able to move on without checking it out. You might think some of the puzzles are so obscure that it would be impossible to figure out without help. I’ll admit: I used the in-game hint line a couple times, but I always ended up hitting myself since the solution would be so obvious. My advice: never throw common sense out the window. I am grateful to the developers for including a map to gameplay, allowing for characters to fast travel to all locations—trust me, you’re going to need it. 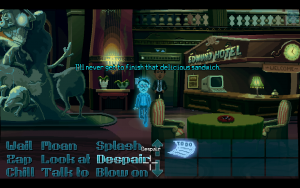 Poor Franklin can’t even touch anything…

I chose to play Thimbleweed Park on the Nintendo Switch to see how it would perform. While it is still fun to play as a handheld, it transfers well to the television when docked. But when it was docked, you’re not exactly able to point and click that quickly since you only have joysticks. It’s far better to play the game handheld, because then you are able to use the touchscreen. Yet sometimes, even with this it can get annoying since the touch selections are small and you can accidentally select the wrong item or speech choice. In the long run, Thimbleweed Park is more meant for a mouse than a game controller—even though it’s still possible.

Thimbleweed Park’s atmosphere is eerie, yet creative. Its art style is innovative and I have a great fondness for this 8-bit world. Even though everything is pixelated in NES-style graphics, environments are still content-packed and fun to explore. Adding to the strange ambience, the soundtrack is another great part about the game, giving it a sleuth, mysterious gumshoe theme, with plenty of jazz in the background. You can listen to a sample here. But beware the otherworldly-ness of it. 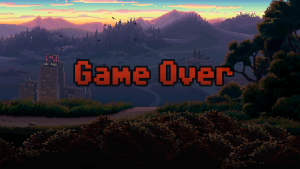 You can end the game early by pushing a self-destruct button and blowing yourself up…don’t do that.

While the game is great in many ways, the one problem I have with it is its ending. While I won’t spoil anything because I still believe Thimbleweed Park is worth playing, I feel the ending could have been much better. It simply did not do the rest of the game justice. The game actually has several ways you can end it early, but those are more for the sake of a joke than an actually attainable alternative resolution to the story. Honestly, it was almost a deal breaker for me, but I truly believe the rest of the game is worth every hour spent solving the puzzles and playing through the story. 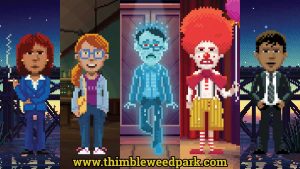 To summarize, Thimbleweed Park is a fantastic call-back to the old point-and-clicks from the past. While the ending was less than satisfactory, the gameplay and puzzles are strong, pushing the intellect of the player and challenging their puzzle-solving abilities. Priced at only $19.99, it is well worth the money spent. If you have ever played The Secret of Monkey Island or Maniac Mansion, then you’re going to love this game. If you have never played any point-and-clicks, I suggest you try this one! It’s a great introduction to the genre and may even get you interested in more.