Review – Through the Darkest of Times 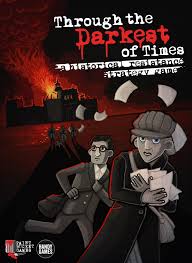 Set in 1930’s Germany, Through the Darkest of Times is an indie strategy game that asks you to survive through just that—one of the darkest eras in modern history. You’re the leader of a resistance group in Nazi Germany, witnessing first-hand the atrocities of the Third Reich all while trying to resist and stay alive. The details and everyday nature of Through the Darkest Times make it eerie and engaging, while complex yet approachable gameplay can either excite or frustrate. It also recently came out on the Switch, giving you another way to resist Hitler in game form. While you can’t stop World War II or overthrow Hitler, you can play a role in how much damage is done and see how everyday Germans resisted, fought, and survived in the midst of so much terror and injustice.

You meet and discuss Hitler’s rise and actions with Christians, with various reactions. There are some Biblical references in conversations or events.

It’s Nazi Germany, folks. You won’t see much, but there were several allusions to everything from bullying, mobs, and petty cruelty to concentration camps and massacres. Discussions of violence are everywhere.

There are a few bad words, but they are very rare.

There are some references to alcohol or smoking but rare.

So, it’s no secret that 2020 has kind of sucked. Between the pandemic, racial and political turmoil, issue after issue, and the unending spiral of uncertainty that is absolutely everything- I’m down to take a break from 2020 United States. Visit somewhere… even more terrible. Even more terrifying, confining, and uncertain. It’s like when I hated sleeping on the floor at sleepovers so I’d try sleeping in their wooden dining chair for a few hours- suddenly the floor felt like clouds. And that’s about the logic I went into Through the Darkest of Times with.

Through the Darkest of Times places you in 1930’s Germany as the a leader of a Nazi-resistance group. You play through four chapters of events and objectives through 1933 through 1945 in Berlin, Germany. Through choosing dialogue, planning missions, and managing your money, supporters, and suspicion, you try to keep your resistance movement alive for as long as possible. While you can’t change the bigger events and you can’t overthrow Hitler, you can try to save as many people as possible and keep your different ideologies alive.

The gameplay itself feels like a management simulator meets visual narrative. There’s a lot of imagery and storytelling at play, as the game brings the everyday stories and experiences of common Germans to life. The experience is rather reading-heavy as you read the dialogue, short asides, and descriptions of events alongside pictures of what’s happening. While there’s not many scarring visuals, a lot of the stories and interactions are harrowing in their own way as you live through the Holocaust and how it impacted average people.

The strong suit of Through the Darkest of Times is that it does give Nazi Germany an honest voice. One of my favorite books is The Book Thief partly because it shows the realities of such a vilified and unimaginable part of human history. You know what happens in Nazi Germany. You know the fates of the Jewish people who you see being belittled and boycotted in the streets early on. You know that the initial turmoil and problems in 1933 are only going to get worse. But Through the Darkest of Times still keeps you engaged and doesn’t let you become numb to it. It shows how different Germans reacted to the rising power of Hitler as he slowly but surely destroyed German democracy.

It doesn’t let Nazi Germany be simple or easy to understand- instead, it only adds to the complexity and the realism of this era of history. You sit with nice church goers who explain how Hitler really isn’t that bad if God let him be rulers as well as Christians who can’t stand watching Hitler do this to their neighbors. You watch burnings, beatings, and boycotts and listen to various passersby as they praise it, say nothing, or hate what Germany has become. As the violence and discrimination gets more intense, so too does the storyline and the weight of the different interactions. There’s so much research and history that went into the creation of Through the Darkest of Times that seems to do this horrifying time period, and the people who lived through it, justice. The details and the humanity of it are incredible.

The management simulator part of Through the Darkest of Times comes into play when you’re planning your missions, managing your supporters, collecting supplies, and trying to stay out of harm’s way. There’s real dangers and mechanics at work here- such as how many times you’ve been seen or police raids or where the Nazi’s are most present on the map. You also have an increasingly complex list of possible missions which can vary from collecting donations and talking to supporters to vandalizing Nazi propaganda or starting riots. As you progress, you can complete more and more risky missions to discover the truth, spread the word, and grow your resistance networks. Watching this process is interesting, if a bit random-feeling. It feels akin to playing a board game in some ways as you can put the best pieces on the board and think you know what that card does- but a bad dice roll and it’s all for nothing.

However, I will say that the gameplay also feels akin to management games like Plague Inc. Sure, the goal in Plague Inc. is the kill all of humanity and craft a deadly virus. The different elements of it can feel intense, complicated, and difficult to master as you manage all the details, a lot like Through the Darkest of Times. However, even the most complex of games have a logic- and once you figure it out- nothing can really scare you, at least that badly. Thats kind of how Through the Darkest of Times felt as I tried to understand everything, but once I figured its main mechanic- the only thing you really have to watch to survive- it killed a lot of the suspense for me. Sure, I enjoyed it, but a lot of the gameplay can feel very sluggish, random, or almost unfair. Before I figured it out, I was often lost and either playing it far too safe or figuring I might as well go out setting stuff on fire. It’s really up to you as the player how you enjoy the mechanics of the actual gameplay. I would say it’s interesting and fits the storyline and themes of the game, but it definitely can get tiring or frustrating or even lackluster as you continue on. What makes the game complex and engaging can make it convoluted and confusing just as easily.

I will give a moment to the unique art style and design on offer here. It’s a very grim yet creative black and white almost Picasso-type art style which makes 1930’s Berlin feel unique yet digestible. As you shift from the story bits to the mission planning, the style feels cohesive and like a fitting depiction of the dark and shadowy world you live in.

My final note would be that I did play the game on my Nintendo Switch, which altered some of the experience for me. Through the Darkest of Times honestly makes far more sense on PC. The reading-heavy gameplay doesn’t mesh too well with a large TV or the semi-small Nintendo Switch screen. However, it was playable and I got used to it on the Switch. I wouldn’t recommend it at all for a big-screen experience, but if you’re using just the Switch screen it’s a decent experience- just make sure you know what button does what before you confirm your mission planning!

In the end, Through the Darkest of Times is an interesting, well-designed game for those interested in management-style gameplay meshed with the dark complexities of history. While it’s not as good as games like Beholder or Headliner when it comes to a really engaging dystopian experience with a clear theme and message. However, it does do a good job of capturing what life may have been like during Hitler’s reign and turning it into a mostly engaging game. The gameplay itself can feel a little convoluted and lose its interest over time, but it will really interest some players while absolutely boring others. It really depends on what sort of gameplay interests you. But regardless, the details and thought that went into Through the Darkest of Times is more than evident and makes it worth checking it out if it sounds like your cup of tea.

Through the Darkest of Times is a great way to experience the realities of Nazi Germany and try to resist its evil, but it's definitely not for every kind of player.