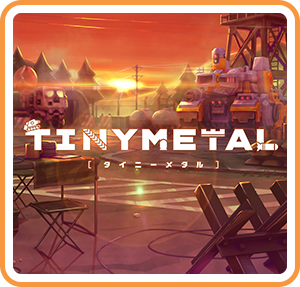 It’s been over 15 years since the Advance Wars franchise first dropped on the Game Boy Advance. Known for strong turn-based tactical combat, excellent encounter design, bright, memorable characters, and a fantastic variety of ways to approach battle, the series garnered a loyal fanbase. After some missteps, the series ceased development but now, the folks at Area 35 have seen fit to bring fans a spiritual successor with Tiny Metal. 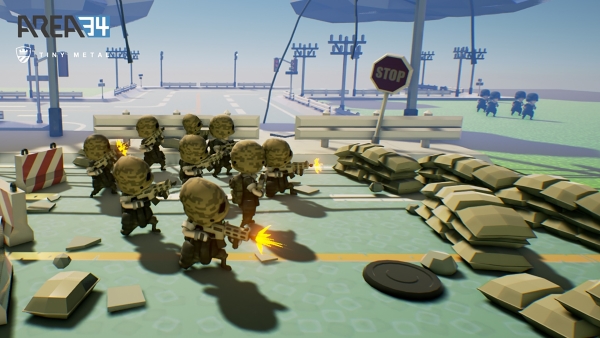 There is implied violence with groups of units firing at one another, but no blood, gore, or even bullets are ever shown. Units that are killed simply collapse and fade from the screen.

I can’t recall any instances of language or crude humor in Tiny Metal. 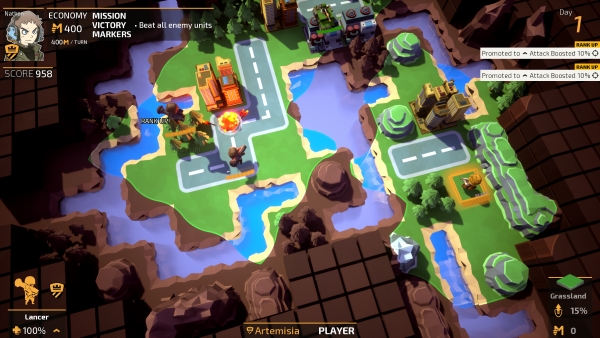 There is no classic usage of narcotics or alcohol. Some characters appear to be brainwashed, after a fashion, so it’s feasible that a drug of some sort could’ve been used in that process.

Warmongering, greed, and arms dealership are major components of the game.

Loyalty and bravery are strong thematic story elements. The nature of the game promotes patience and planning as well. 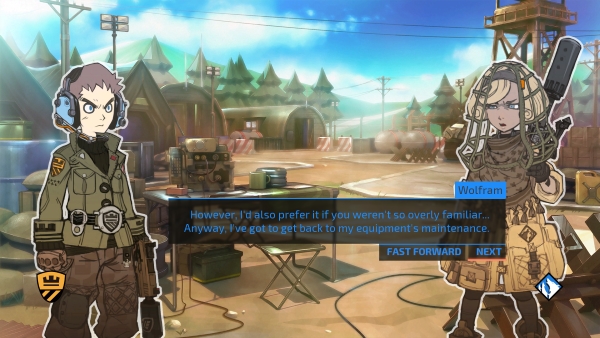 When I was a teenager, I got a Game Boy Advance. The first game I picked up for it was Advance Wars, a turn-based modern-era war game with bright, colorful visuals and a campaign that featured top-tier encounter design. I grew to love Andy, Max, and the other commanders and their armies. Over the years, it developed into a franchise and had a few sequels (in truth, the Wars franchise has been around since 1988) but with the 2008 release of Days of Ruin, which was critically received well, the franchise died, and Intelligent Systems’ other strategy property, Fire Emblem, has continued to thrive.

Fast-forward nearly a decade. A small team of diehard fans kickstarted a project known as Tiny Metal. The game appeared to be a worthy spiritual successor to the military strategy game longtime fans were chomping at the bit for. Now, after some time and alleged development troubles, Tiny Metal has hit both on PC and consoles, allowing me to wax nostalgic and get my strategy fix all at once. 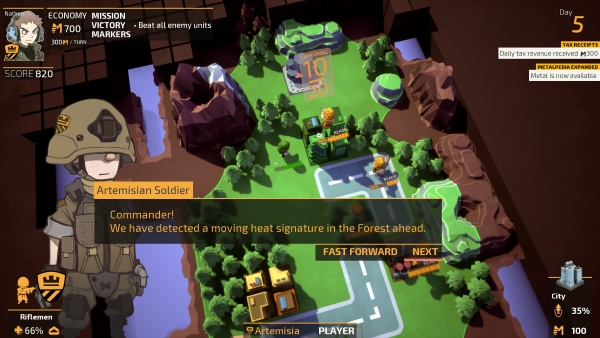 Artemisian commander Colonel Lindberg’s plane has been shot down and the commander is presumed dead. Loyal subordinate Nathan Gries bolsters forces and heads into Zipanese territory to search for the colonel. Along the way, he makes some new allies and discovers a plot more sinister than anyone else could have guessed. I’ll give the writers on Tiny Metal some credit here. The plot has some great twists and they’re able to tell the story from a military point of view, driving the game’s action forward without bogging it down in a bunch of political fluff. Sure, we have several nations warring together, but the narrative focuses on the military commanders and their interactions, not those of presidents and kings. Honor, loyalty, betrayal, and more drive each of the factions’ leaders as they deliver a story filled with intrigue and military drive. 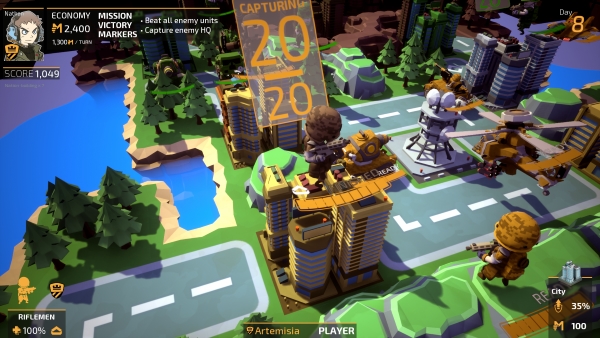 If you’ve played any of the Wars games, you’ll already know the formula Tiny Metal follows. You start each mission with a number of soldiers under your control. You can move them or have them engage in a range of activities from attacking foes to capturing buildings and more. Each turn, you’ll accrue money based on how many buildings you own. You can then deploy units from barracks and airfields to bolster your army.

Units range from infantry with various specialties to tanks, artillery, and a handful of aircraft. The result is a sophisticated game of rock-paper-scissors. The game’s campaign is setup to introduce players to new units with a scenario that plays to their strengths, allowing the player’s understanding of the units and mechanics at their disposal to grow organically with the story. While much of what I grew to love about the Advance Wars games is here, there is one notable omission: Tiny Metal lacks C.O. powers, a mechanic that let commanders use a special ability to heal or buff their units or harm each of the enemies. The lack of C.O. powers makes playing with each of the armies feel like nothing more than a palette swap, where your choice of commander made a significant impact with the Wars games.

A couple other things players will notice about the game is in its lack of alternative gameplay options. Tiny Metal gives you the ability to perform a skirmish against computer-controlled enemies. With nearly 60, the number of skirmish maps is impressive, but the AI occasionally does some awkward things and, beyond that, there’s no way to distinguish the style of enemy you’re playing against. If you’re one of those commanders who enjoys a 1v3 challenge, you may have to settle for something a little less organized since AI foes are just as likely to attack one another as they are you. Beyond skirmish, the game also currently lacks a multiplayer mode (though there is an option for it on the main menu with “Coming Soon” glued to it). This is the sort of game that could thrive with an online community, but that’s currently not an option. You can’t even play hotseat with friends locally. 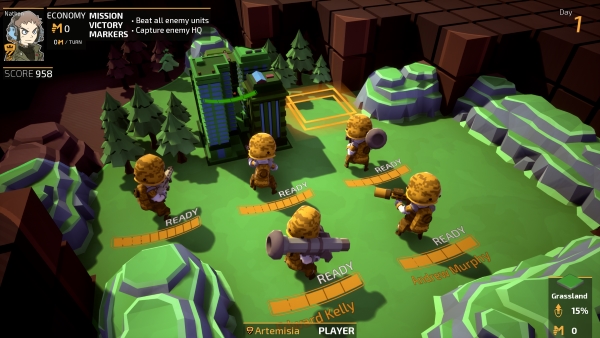 Visually, I’m torn on Tiny Metal. The 3-D models are clearly created with the Wars art style as a heavy influence. They evoke everything about those games in a 3-D space. My problem with it, however, is that the vibrant 2-D art style is a large part of what made Advance Wars so appealing when it first launched on the Game Boy Advance all those years ago. In Tiny Metal, the character art in story interludes feels like they were on the right track. Seeing the game in 3-D just makes me miss the 2-D cartoon art style that much more, though. It’s also worth noting that, while the game runs fluidly on a solid PC, I’ve also played a bit on the Switch; on that platform, the battles are essentially animated cutscenes that are downright disheartening to watch as they appear to have been downgraded even more.

From an audio point of view, the soundtrack successfully establishes the setting, giving you something to listen to while the action on screen is taking place. The voice-over work feels awkward to me though, because while all of the narrative is in Japanese, each unit within missions speaks English. I understand only recording the story in one language due to constraints on time and finance, but the lack of consistency feels somewhat klutzy. 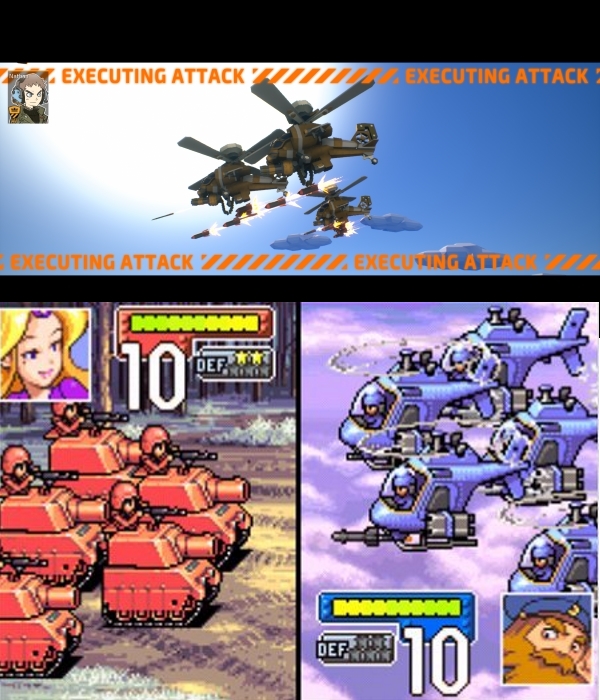 Tiny Metal fails to capture the charm of Advance Wars

Overall, I enjoyed my time with Tiny Metal. By and large, Area 35 stays true to the vision of their spiritual predecessors, but they fail to innovate in any meaningful way. The core gameplay fans want is intact and the campaign tells a solid story while delivering fun, informative scenarios. The lack of multiplayer out of the gate is a bit of a hiccup and I would’ve loved to see the visuals (or at least those classic bright, colorful battle animations) remain in 2-D, but at the end of the day, turn-based strategy fans will have a good time with Tiny Metal. Here’s to hoping they get multiplayer lined out so they have a chance of building a substantial online community.

Tiny Metal hits most of the high notes nostalgic fans of Advance Wars are looking for. The lack of multiplayer and a few other missteps hold the game back, but turn-based strategy fans will enjoy the campaign scenarios. Beyond that, it fails to innovate on a well-worn path.