Math is Hard, But The Division is Fun 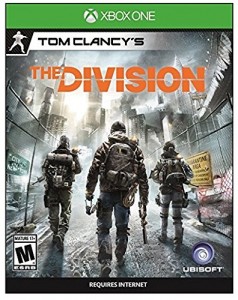 Tom Clancy’s The Division has had a rocky short history. Originally announced in 2013 and delayed on multiple occasions, many industry insiders conjectured that the game might have become vaporware. Ubisoft quelled those fears, giving fans a solid date and granting the public access to a couple versions of the beta before its final release. At the end of the day, I couldn’t be happier that development team pushed things back to correct issues. We’ve got a winner on our hands here. 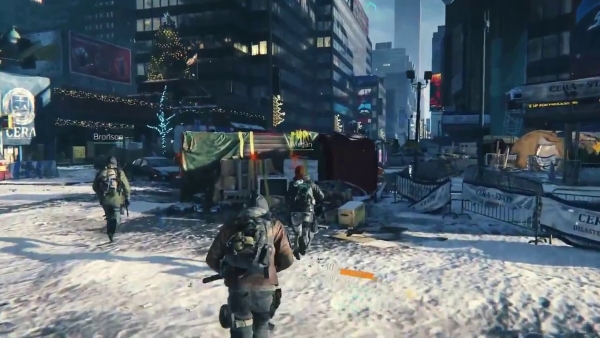 Rolling through the streets of Manhattan with your crew

Spiritual Content: There is occasional banter from civilians exclaiming something along the lines of, “God still loves us and is testing us.” Though never expressly said, there is an enemy faction whose goal is to cleanse New York with fire and they have a near-religious fervor.

Violence: Given the nature of The Division as a post-catastrophic third-person shooter, it’s no surprise the game is full of violence. You’ll shoot guys and see numbers fly up from their heads. None of that is really disturbing though. The real disturbing content comes by way of documents and video you receive after finishing story missions. These often show or allude to some explicitly very violent acts, including someone being burned alive, brutally beaten to death, and more.

Language/Crude Humor: The game is rife with foul language. Neither friend nor foe are shy of slinging some pretty intense verbal abuse. You’ll even hear it on the radio and cutscenes. Nothing is exempt here. If it’s in an R-rated movie, you’ll likely hear it here. 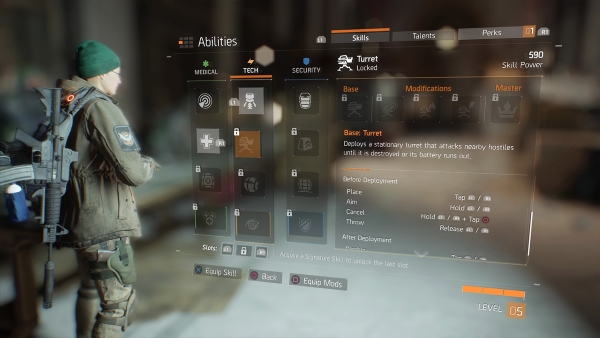 Every player gets access to the same set of skills.

Sexual Themes: Overall the game is fairly tame. There’s nothing sexually stimulating shown in the game. At one point however, a shoehorned  character alludes to her homosexual marriage with a female partner.

Drug/Alcohol Use: No drugs or alcohol are ever shown or referenced.

Positive Themes: You are a quintessential good guy. Activated to help the population of New York in the case of a disaster, you’ll work your way around the city helping to take back zones from the various militant groups that have risen to fill the power vacuum. You’ll rebuild the medical ward of a base, opening up various different facilities to help the people of the city out. As you journey, you’ll also run into civilians on the street you can help by providing them with bottled water, med kits, and other items. 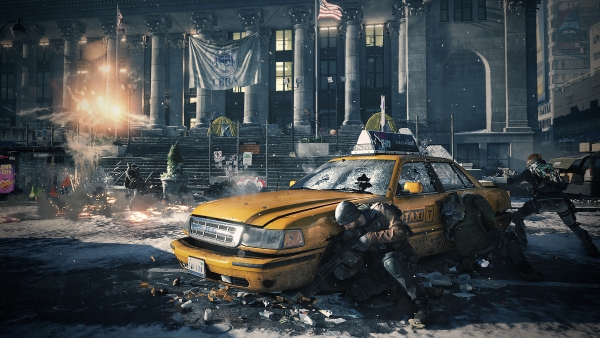 Use the environment to your advantage or you’re a sitting duck.

I’ve been looking forward to The Division for a long time. I’ve been a big fan of other Tom Clancy games over the years (as recently as Rainbow Six Siege) and knowing they had a third-person shooter RPG hybrid coming made me giddy. I knew when I got my hands on the beta that Division would be able to get its hooks in me for quite some time.

First, let’s address the game’s narrative. The Division‘s story feels like someone found one of Mr. Clancy’s unpublished novels and turned it into a game, and I believe it works if only to drive the action.  The bad guys have engineered the smallpox virus to make it faster and deadlier than ever before. They then covered a large load of cash in it and set it all loose on Black Friday. The result kills a large percentage of the population and the Division, a branch of sleeper agents, are activated to quarantine Manhattan and restore control. While it won’t blaze any trails, it does drive home the game’s action and delivers some genuinely interesting moments. If you’re a fan of Clancy’s works as I am, you’ll probably dig what you see here. 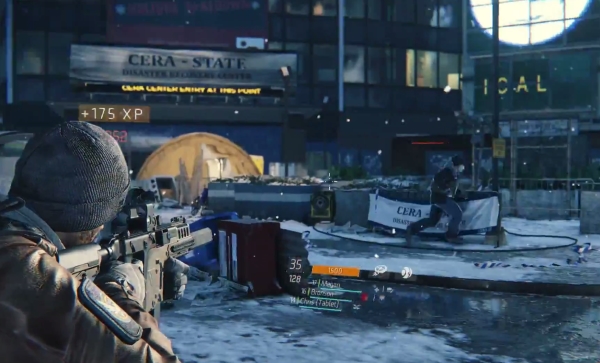 The shooting mechanics in The Division feel great.

For the unaware, The Division is a cover-based third-person shooter with an open world, loot-driven inventory system and RPG progression. This sounds like a mouthful, and while it may be, but it makes for an addictive combination that will have you pouring dozens of hours into infected Manhattan.

First, as I said, this is a third person shooter and the gunplay feels great. If you like the way Gears of War plays, you’ll feel right at home here. Like a Diablo game, The Division features fantastic weapon variety and loot mechanics, ensuring you’re constantly seeking that next upgrade. When you couple that with unique muzzles, grips, scopes, and more for each gun, the possibilities are nearly endless. On top of the weaponry, you can outfit your character will a full suite of unique armor and, perhaps even more entertaining, an ever-growing wardrobe to customize your character. All of this comes together to ensure each player feels like their character truly is their own. 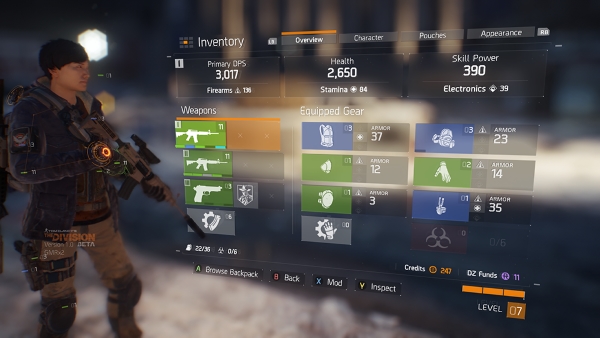 This is the loot system Destiny wishes it had.

Throughout the game, you have a base of operations you’re working constantly to upgrade. There are three wings, each corresponding to your character’s skill tree (medical, technological, and security). As you unlock a new feature in the base, you’re granted new skills, talents, and perks. Throughout the city, you’ll take on missions and encounters that give you points expressly for upgrading a certain wing. I enjoy the system as a whole and it’s fun to watch your base grow and serve the people. My problem with it is that at the end of the game, what really separates you from any other character? Everyone will have the same skills available to them (though your team may need to fill different roles).

The city of Manhattan is broken up into several districts, each catering to a different range of character levels. As you progress, you work from one zone to the next, taking on harder challenges and missions. Much like the original Guild Wars, everything outside of safe zones is instanced for your team. At the center of the map, though, is one of the coolest, most unique gameplay mechanics I’ve seen in an online shooter—the Dark Zone. 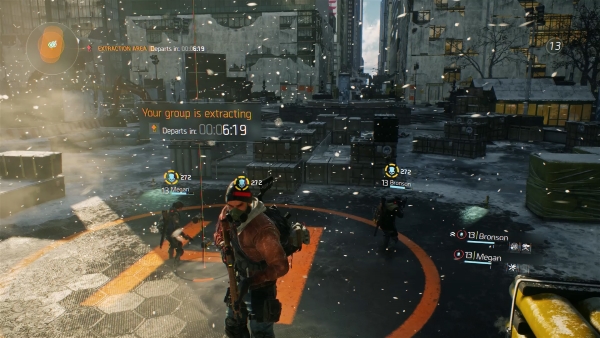 Trying to get your loot out of the Dark Zone is an intense, rewarding experience.

The Dark Zone is an area airlocked away from the rest of the city. Inside, the world is in sheer chaos—it’s the only place in Manhattan where agents can betray and slaughter one another. Here, you’ll encounter much tougher enemies, but your odds of getting sweeter gear also improves. Once you’ve got that gear, you’ll have to call in a chopper to extract it for decontamination, and that’s where things get really interesting.

At any point in the Dark Zone, players can turn on one another. They’ll be marked as “rogue” for everyone to see, but they’re free to take your hard-earned gear for themselves. It makes each encounter with another person or group a tense standoff, and as infuriating as the agony of betrayal can be, the Dark Zone has continually proven itself as an incredibly satisfying way to experience competitive, and sometimes cooperative, play. 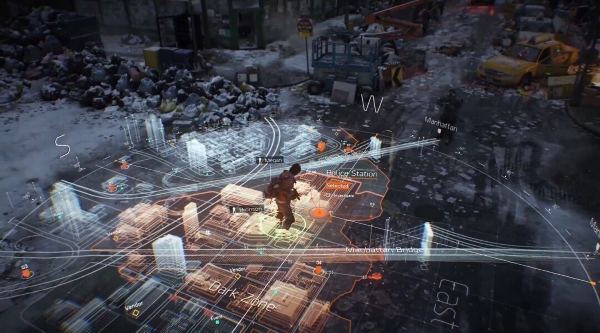 The map overlay shows a fascinating 3-D rendering of the city.

The Division does a lot of things right, but I can’t let it go without addressing a few complaints. First and foremost, the basic side-mission structure could use some more variety, but in over 30 hours with the game, they never felt like they overstayed their welcome. On top of that, the lack of a class-based system really bothers me. Every character will have access to the same skill set during the end-game. Maybe that’s not a big deal in the grand scheme of things, but it feels like one of the things Destiny got right was ensuring a unique skills for each class. That leads into my next complaint: you can create multiple characters, but there’s literally no reason to. One single character can literally do everything in the game, so why would you play more? Finally, the mission’s bosses feel like little more than over-hyped regular enemies. Sure, they have more armor and stronger weapons, but apart from actually having names, there’s no personality to them. Games like Diablo and Borderlands offer unique boss experiences for their loot grind, but that’s sorely missing from here. Show the face of the bosses! Let us see those ugly mugs before we spend 10 minutes pumping them full of lead! 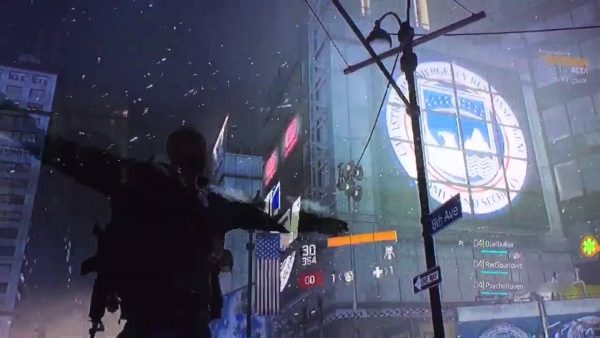 Jumping jacks are the new way to dance.

At the end of the day, those complaints ultimately do little to detract from an overwhelmingly positive experience. The loot grinding, character progression, and base building elements go a long way to reinforce solid combat mechanics. On top of that, the game is beautiful and Ola Strandh’s soundtrack does an excellent job fueling the action. When you couple all of that with one of the most unique and satisfying multiplayer experiences I’ve ever had with a shooter, you know you’re in for a great time. And thanks to excellent matchmaking, you can do it with or without other friends at the ready.

Tom Clancy's The Division is a great third-person cover shooter with addictive combat and progression systems, a unique multiplayer component, and a surprisingly well realized story to enjoy alone or with friends.