A Long and Uncomfortable Train Ride

Beginning in 2009, Dovetail Games has released many simulators, including Flight Simulator and Euro Fishing. A British developer, Dovetail has worked alongside other software developers such as EA and Microsoft, but now exclusively with the latter to deliver its games to Windows PCs and Xbox consoles. Currently, Train Simulator is only available for PC, but there are plans to provide a console release sometime in the future. Once known as Railworks, Train Simulator seeks to train players in real life situations with real trains on actual routes. It does so by creating an artificial environment to be able to operate original controls and to learn how modern trains are driven. 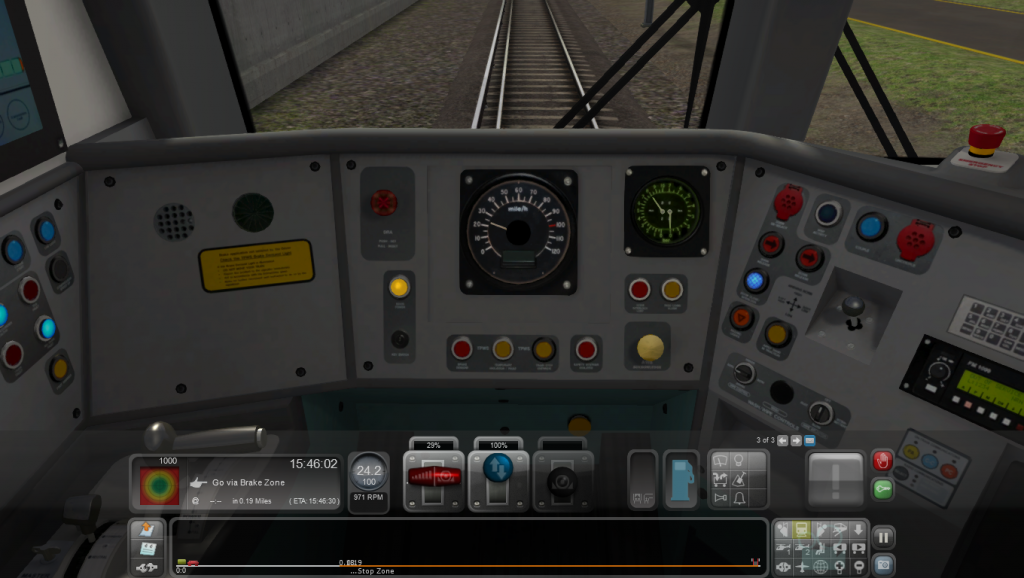 So many buttons…what do they all do?

Train Simulator 2018 has no drug use, violence, language, or negative content. It is essentially a simulator and is used for players who seek to educate themselves on how to operate trains for career purposes, and for those who simply enjoy trains as a hobby. 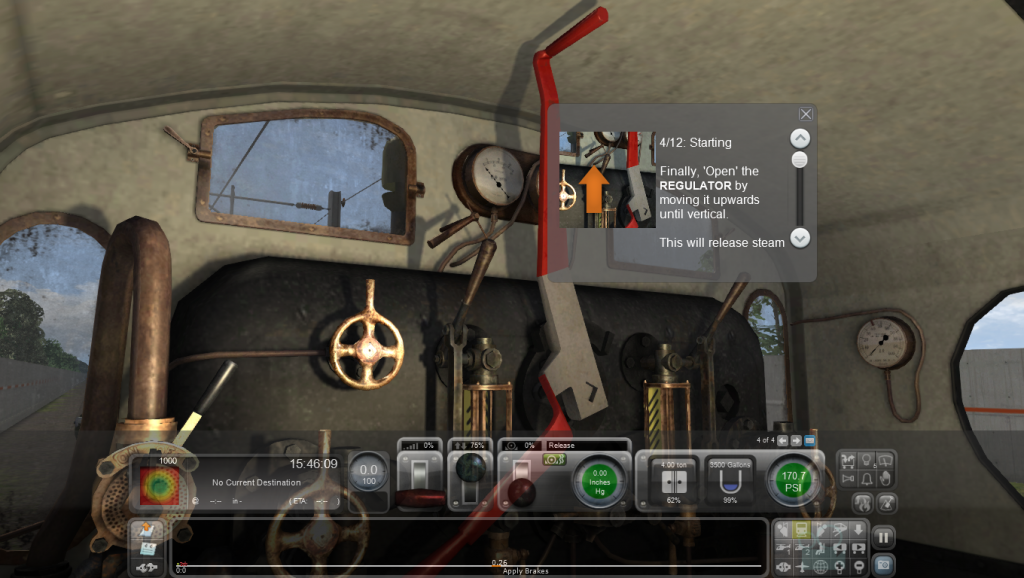 Much praise for the tutorial system. While not always clear, it goes step by step and will not continue until you have done the step correctly.

From the get-go, Train Simulator 2018 presents you with a tutorial of how to use several trains, including diesel, electric, and even an old-fashioned steam engine for curious connoisseurs. This mode is appropriately named “Academy,” which helps for those who have never touched the controls of a train, much less ridden in one. While it does not come with a ton of content, this software does deliver three routes to travel on—all amounting to well over 150 miles of track. 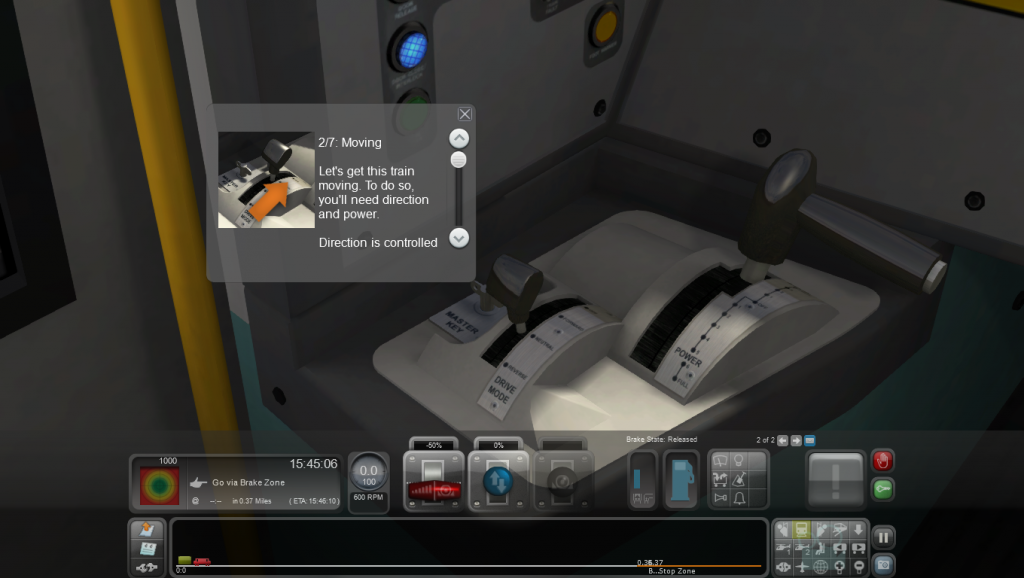 Train Simulator has several modes, including Career, Free Roam, and Quick Drive. The 2018 version of the game comes with three routes and four trains, all of which can be mixed and matched up. In career mode, the player can complete challenges given, which include dropping off a cart at a junction, braving the tough storms of Germany while climbing a steep mountain, or even carrying an abnormally heavy load. This is creative and keeps things fun. 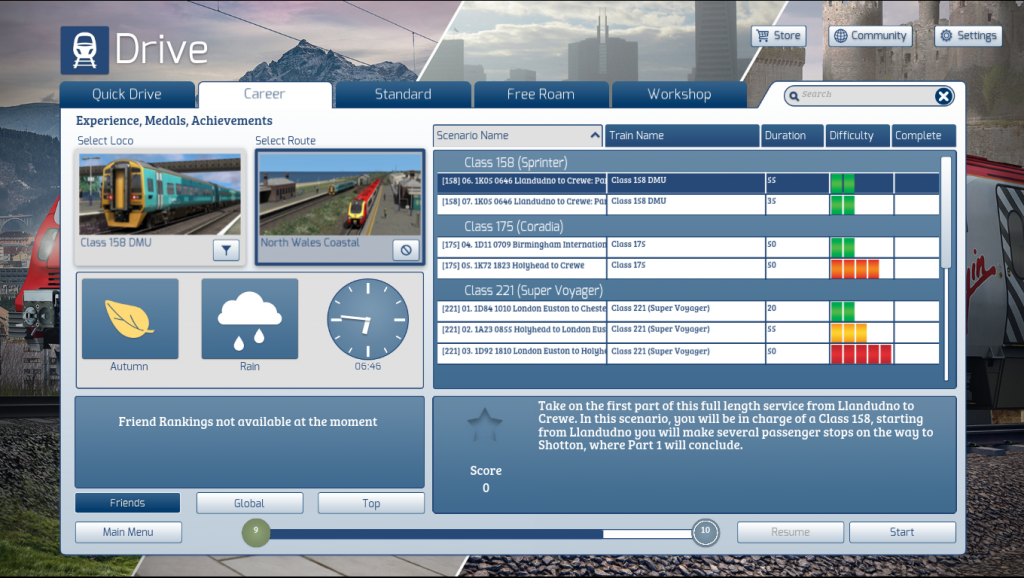 The game is also packed with a level editor that allows one to build a train station, routes, and landscape to one’s liking. Unfortunately, the editor is not user-friendly at all and requires either some prior knowledge from past editions of the game or to browse the web or YouTube for help on how to lay tracks or objects. While it is awesome the game even allows you to make your own tracks, it would have been better to have a simple tutorial that goes along with this customization option. 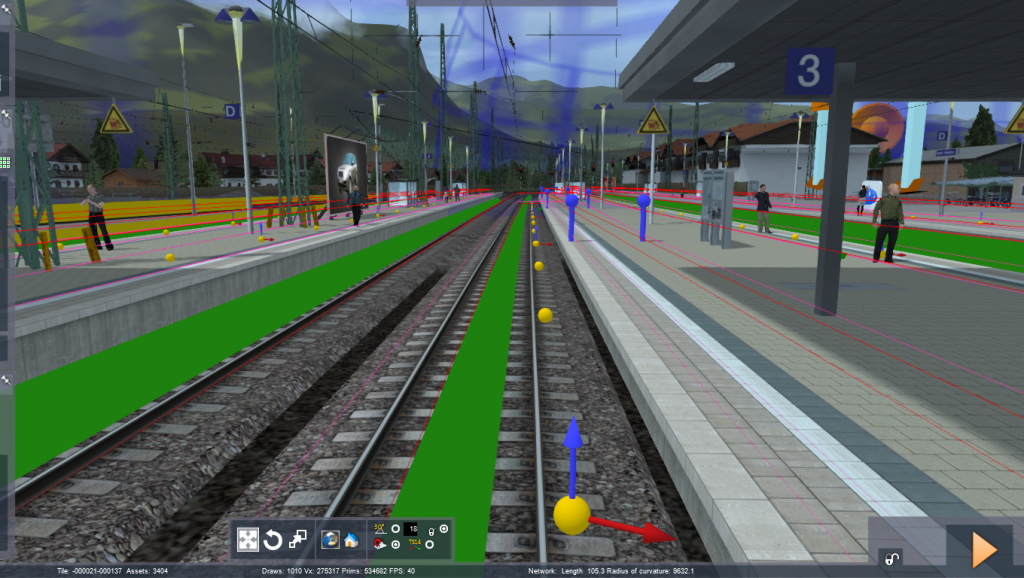 The level editor is extremely vague and gives no clear direction.

Despite its amount of content, the presentation of said content is disappointing. The graphics and details of the various landscapes, trains, weather, and even people are all so cubed and simplified, it reminds of the days when I would play Goldeneye 64 on the Nintendo 64. With the amount of money one has to pay just for the core software, it would be assumed that the developers would take the time to make more detailed landscapes. The game tries to make a case for traveling by train because of the beauty that one can observe in nature along the ride, but Train Simulator fails to uphold even today’s modern graphics in games, let alone any kind of photorealism. 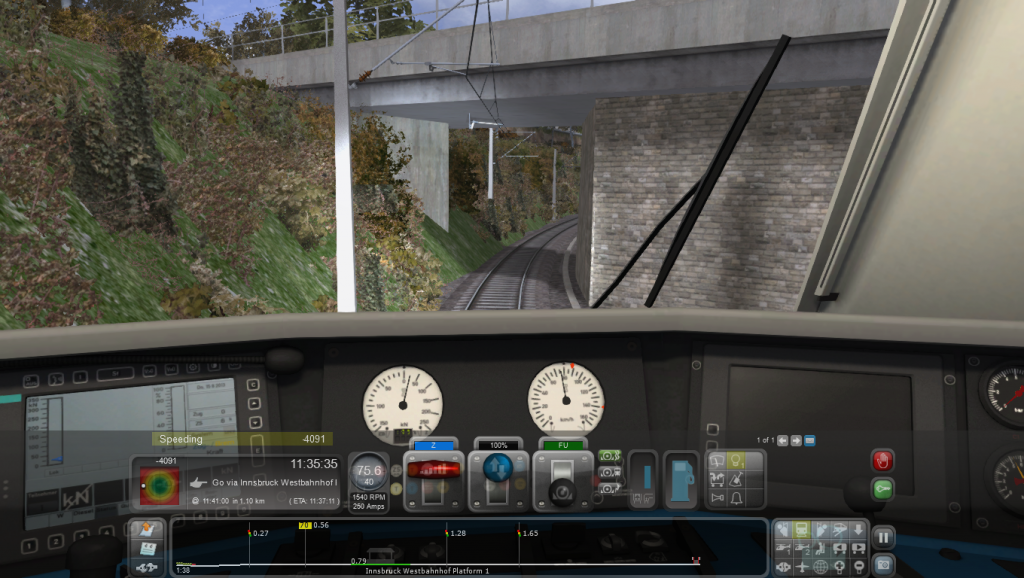 The routes are real and take you through real cities, towns, and landscapes.

While on the topic of content, let’s talk about DLC. The franchise is infamously known for having horrendously expensive DLC, having over $7,000 worth of downloadable content—for the Train Simulator franchise alone! Granted, it’s a good thing that Dovetail goes to such great lengths to develop new trains and routes to keep the simulator relevant and fun, but in the end, the price simply ends up being way too absorbent. The base game alone is forty dollars. From there, bundles cost anywhere from another thirty to forty dollars. Even then, the bundles only include three routes! You can also purchase different types of trains, but each train costs generally costs approximately ten to twenty dollars. With prices this high with nothing but different controls to speak for them, Train Simulator is cost prohibitive to the average gamer. 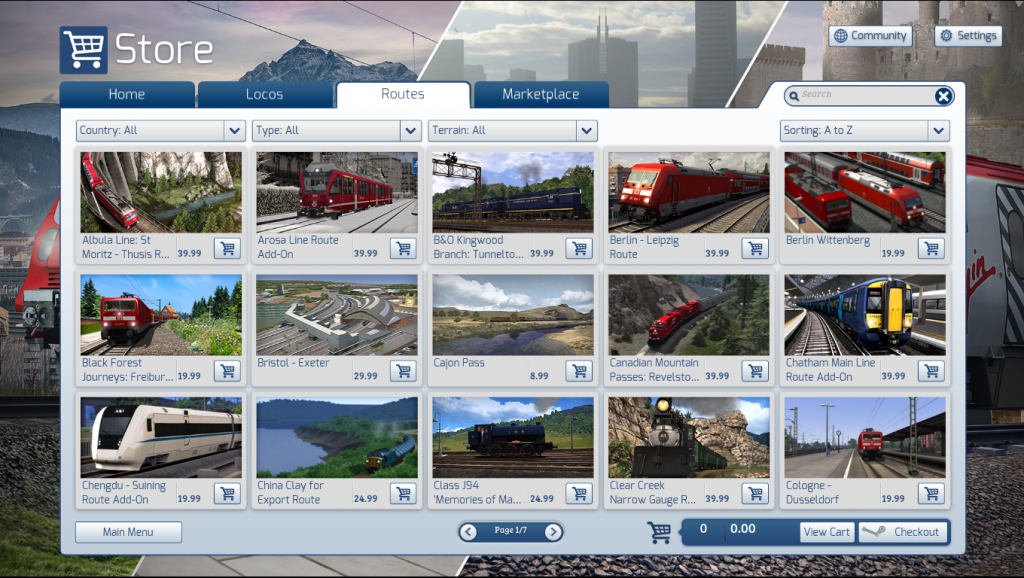 Look at all the trains…and high prices…

Even though the tutorial on how to operate said trains is easy to follow, at times, the words on the controls themselves are blurry and hard to read. All the tutorial does is tell you to turn a black knob to switch on the headlights. The problem is that there are so many black  buttons and knobs, and it becomes frustrating finding the right one. I would have to zoom in on controls to try to make out what it said on the label. For a game that is supposed to simulate how to drive a train, this is unacceptable and embarrassing. 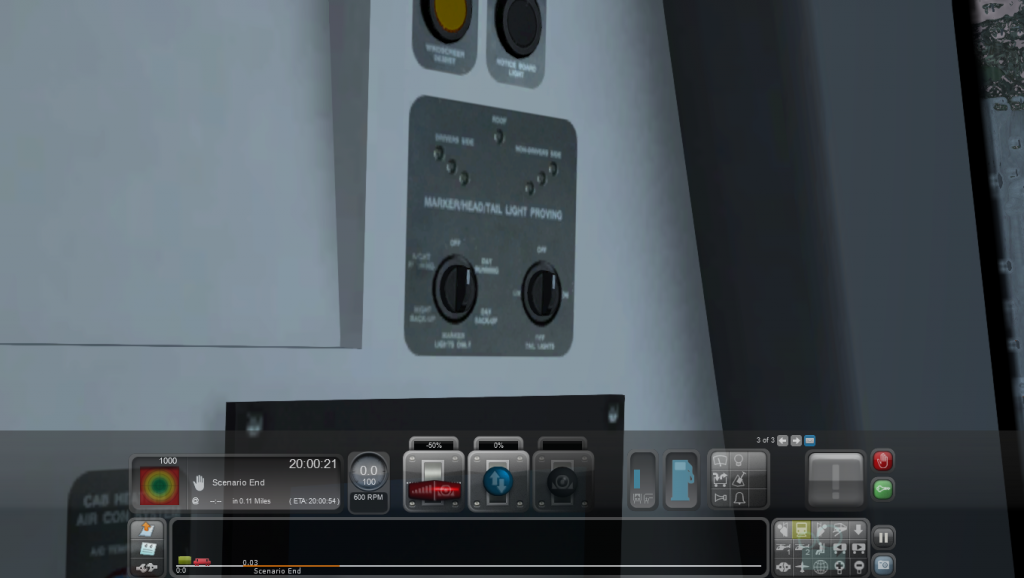 The controls are blurry and unclear at times. As a tutorial and simulator, it is simply unacceptable.

For some reason, load times take a very long time—and I have the game installed on a solid state drive. To load a route, it tooks 2-3 minutes long. I would imagine it being 3-4 times longer on a regular hard disk drive. For a game with low graphic detail, I do not know why it would take so long. I would assume the only reason it takes a while is because it has to load the entire route—however long it is in real life.

This brings me to my next point to talk about: the routes are one of the best parts of the game. Train Simulator guides you through operation, but then allows you to travel at your own pace through train routes that actually exist. That means if the train ride is three hours in real life, it will be three hours in the game as well. These routes vary from European to American. I praise Dovetail for this amount of detail that it poured into recreating real routes in the game, despite the poor graphics and steep prices. 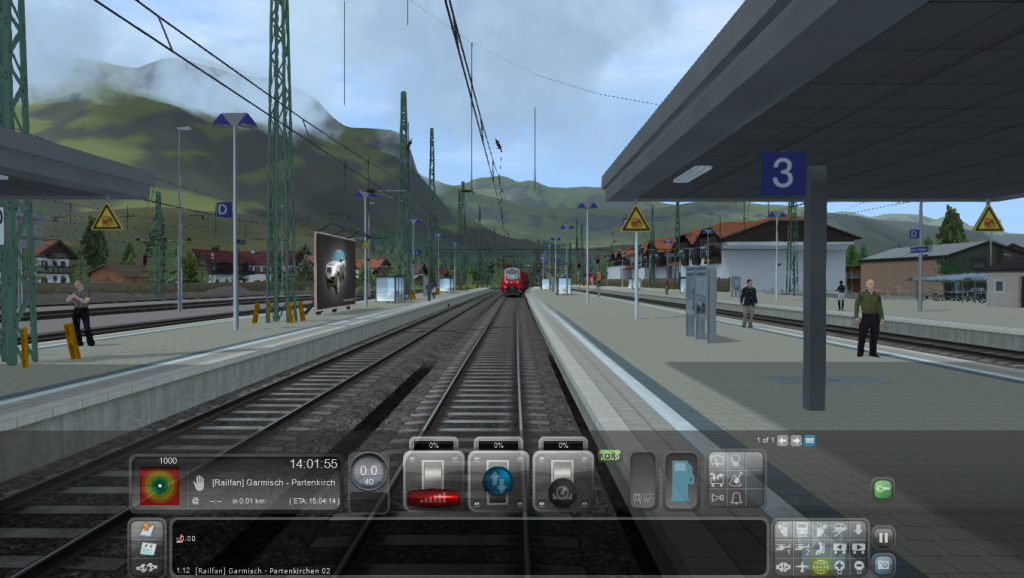 The graphics are outdated and everyone looks…freaky.

Another great part about Train Simulator is that once you buy it, every year, they update the core software for free. So one can keep on driving trains and routes without spending another cent on it ever again. Of course, if one desires new trains and routes, they would have to purchase those, since the core software does not come with more trains or routes—only an updated HUD, bug fixes, and other small changes.

The Steam community is ever present, in that there is no shortage of free user-created content. There are various routes and scenarios that are easy to download and to add to the game. Unfortunately, some content is only accessible if one already owns the bundle having to do with it. Needless to say, if you do not own the route or train, you cannot access the content made with it.

A snapshot of the tutorial menu.

In the end, Train Simulator 2018 is good for learning how to operate a modern train, for familiarizing oneself with a real train route, and, well, that’s all. If you want to try out more trains or routes, it will cost you. The game is good for those who want to learn more about trains or have a love for trains as a hobby. It is a good teacher, a bit of a costly one, but good nonetheless. I recommend this game strictly to those who don’t mind the steep price and who already own the previous titles and love to peruse all of the different routes and trains that are added consistently to the store. If you do not care much for trains or if you have a general curiosity, save yourself the time and money and simply read a book or browse the web—it’s not worth the money.

While it teaches you how to operate trains, Train Simulator 2018's high price for its content, outdated graphics, and blurry control panels make this game a long and bumpy train ride.