From the makers of The Great C comes an interactive VR puzzle-solving game that challenges both your brain and your stomach. Secret Location Inc is a developer that established themselves in 2008 and have been working on VR technology ever since. Ten years later, they have managed to create the first VR narrative and have even won several awards, including an Emmy. Secret Location is also known for their VR management software, which is useful for those looking to monetize VR experiences, like arcades or training of any kind. With Transpose being their second game released, this developer looks to be a promising competitor in the VR gaming industry. 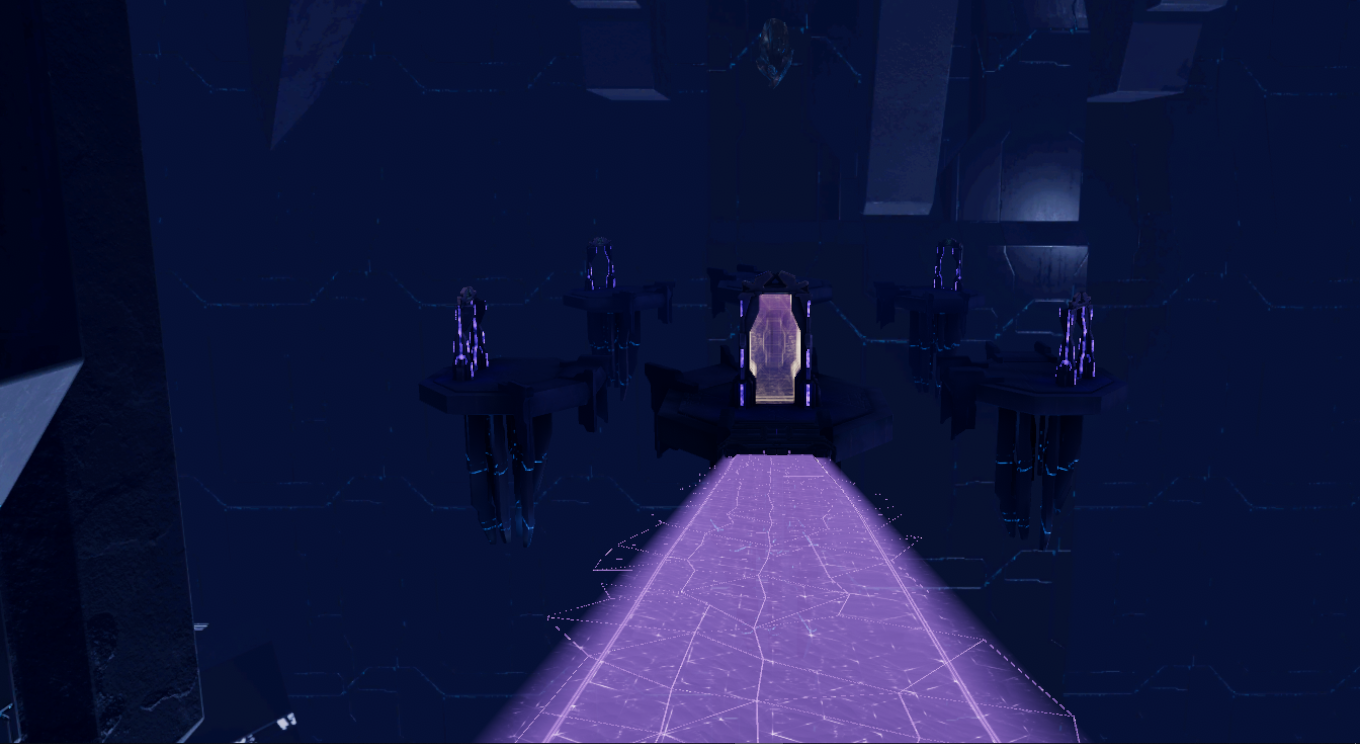 A mysterious world riddled with prerecorded versions of yourself…have you ever felt more alone?

There is no questionable material in Transpose. It is exclusively a puzzle game. When a character falls off the platforms, it will simply reappear at the start point.

Transpose is a mysterious game. The player takes control of some sort of surreal being who is able to record itself several times in order to solve puzzles. There is no explanation of the world you wander around in or of the background or setting. Your goal is to restore the world by continuing to solve puzzles. All you know is that you find the entire area strangely familiar. I love this about Transpose—the story remains enigmatic, but the player is given minor hints before every puzzle is attempted. The player’s interest in the game is continually stirred by the gradual increase of difficulty in the puzzles and the paradoxical universe traversed. 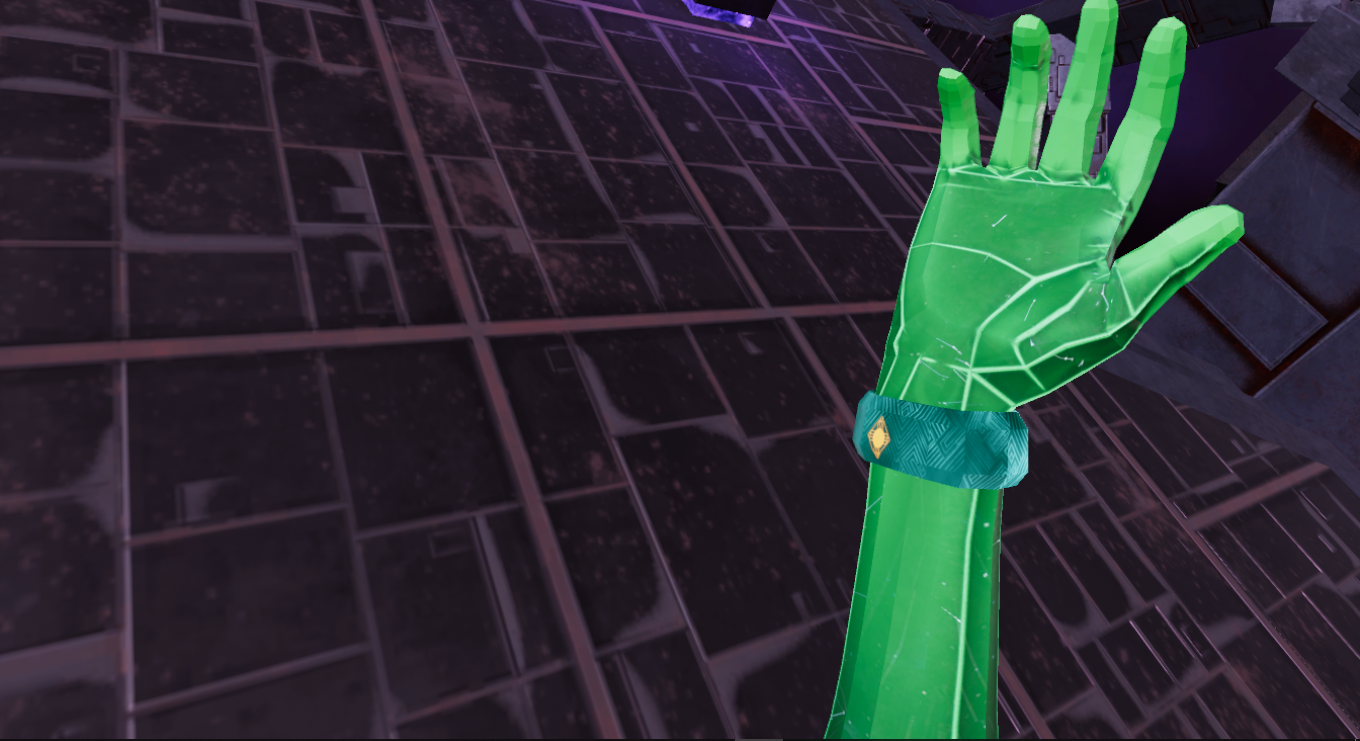 Keep track of different recordings of yourself by looking at the bracelets on your hand. This is how your hand looks in VR. Neat, right?

The fact that this whole conundrum of a world is executed all through a VR headset is enough to send your mind spinning. Get ready to defy physics and gravity as you traverse upside down platforms and watch as prerecorded versions of yourself solve the puzzle before your dizzy eyes. Trust me, it’s much easier if you just get done with the puzzle as quickly as possible; the longer you watch and admire the world around you, the more sick you will get. While it is indeed a beautiful and surreal world (in a sci-fi sort of way), you will indeed get nauseous. Constantly changing from one platform to another and feeling like you’re upside-down will fool your brain into thinking that something has seriously gone wrong, and will request that you empty your guts into a toilet. 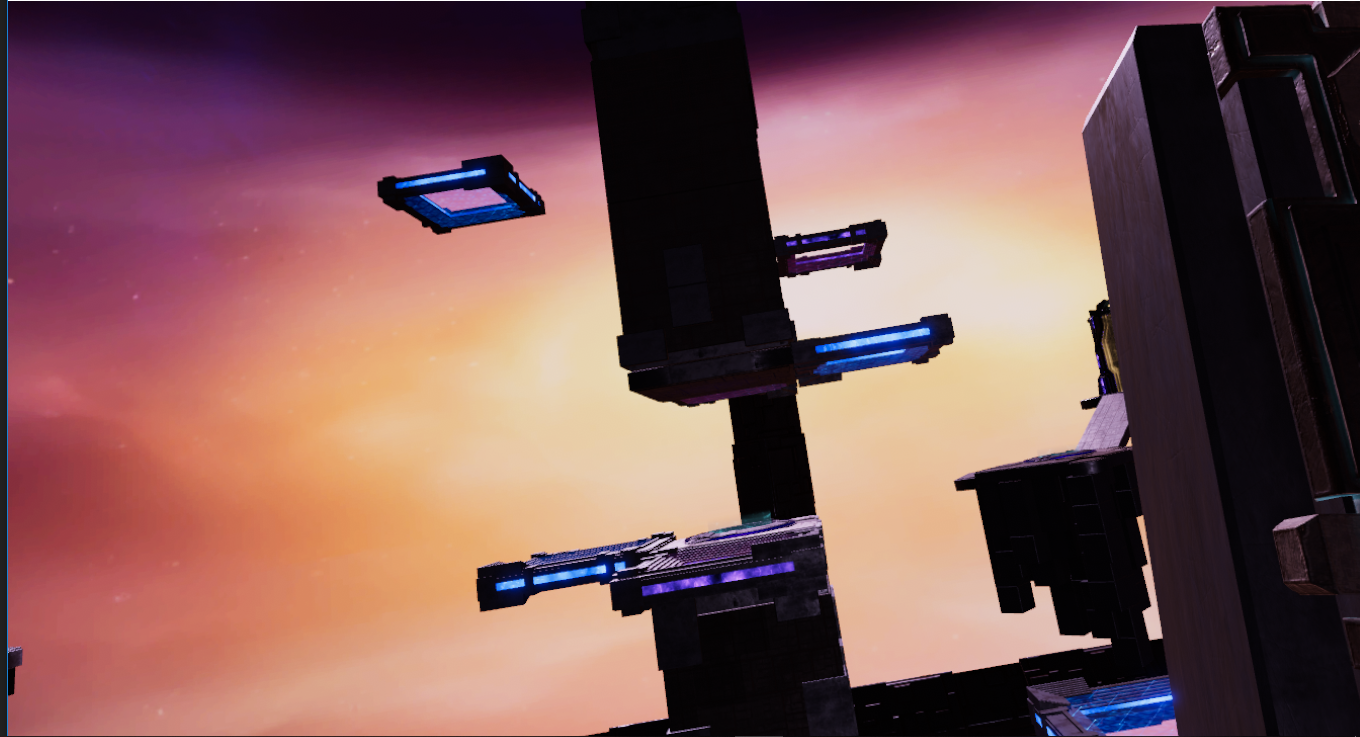 Constant moving platforms and perspectives can cause nausea. Beware!

Having said that, I played Transpose using Oculus Rift. The headset is effective and works well with the game. I felt like I was really there, handing myself a block or waiting for another version of me to flip a switch so I could cross a gap. This is perhaps obvious, but VR technology is truly amazing. While it did make me sick, I am glad Transpose was the first game I ever experienced on a VR headset. 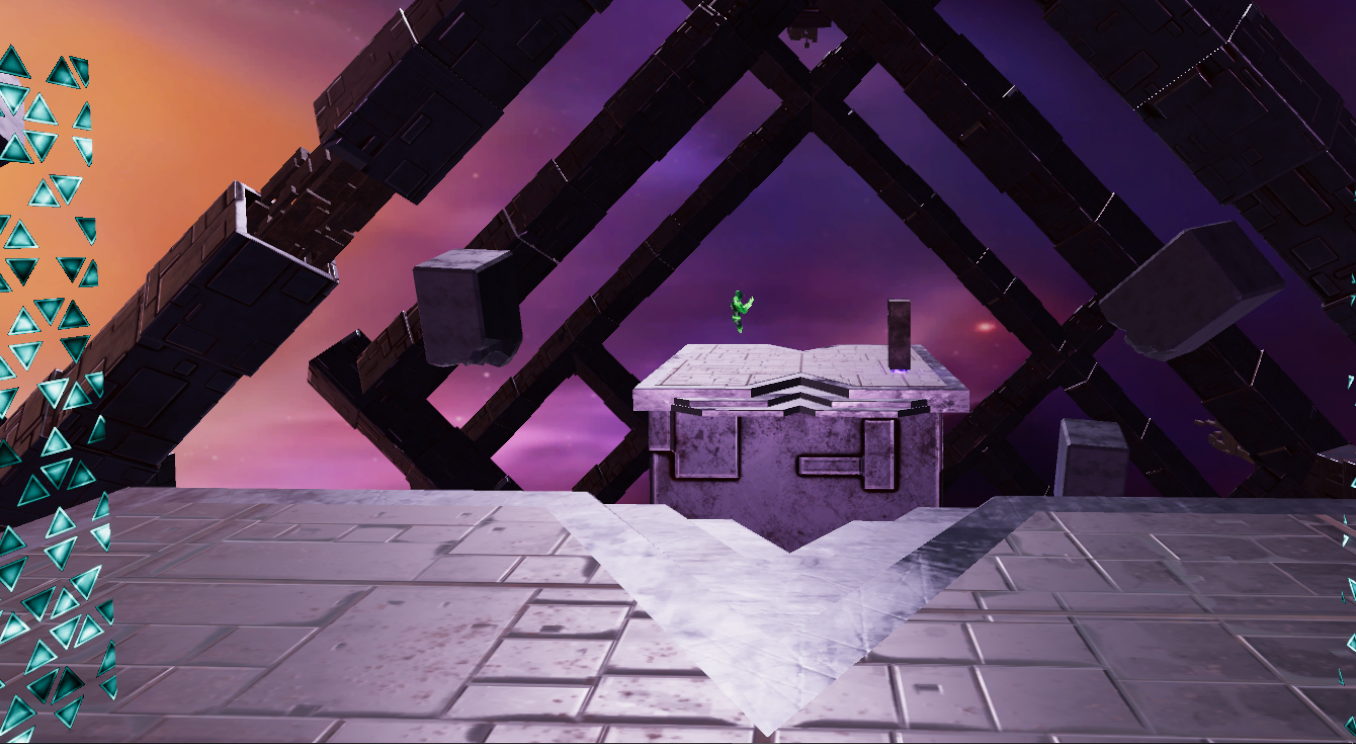 Me waiting for my recording to flip the switch. I cant really get impatient because I have no one to blame but myself.

As I stated above, the world of Transpose is beautiful, especially if you’re into science fiction. I cannot quite describe it, but in an attempt to put it into words, the environment feels like that of the ruins of an ancient planet core. The area’s design feels like a nod to the world of the Portal games—old high-tech structures falling apart, some still having some form of function. The graphic details are phenomenal and also depend on your graphics card. Since I have the bare minimum, a NVIDIA GTX 1050 Ti, I was forced to play the game on low settings. I can only imagine how it looks with settings on high. Either way, the game looks great. 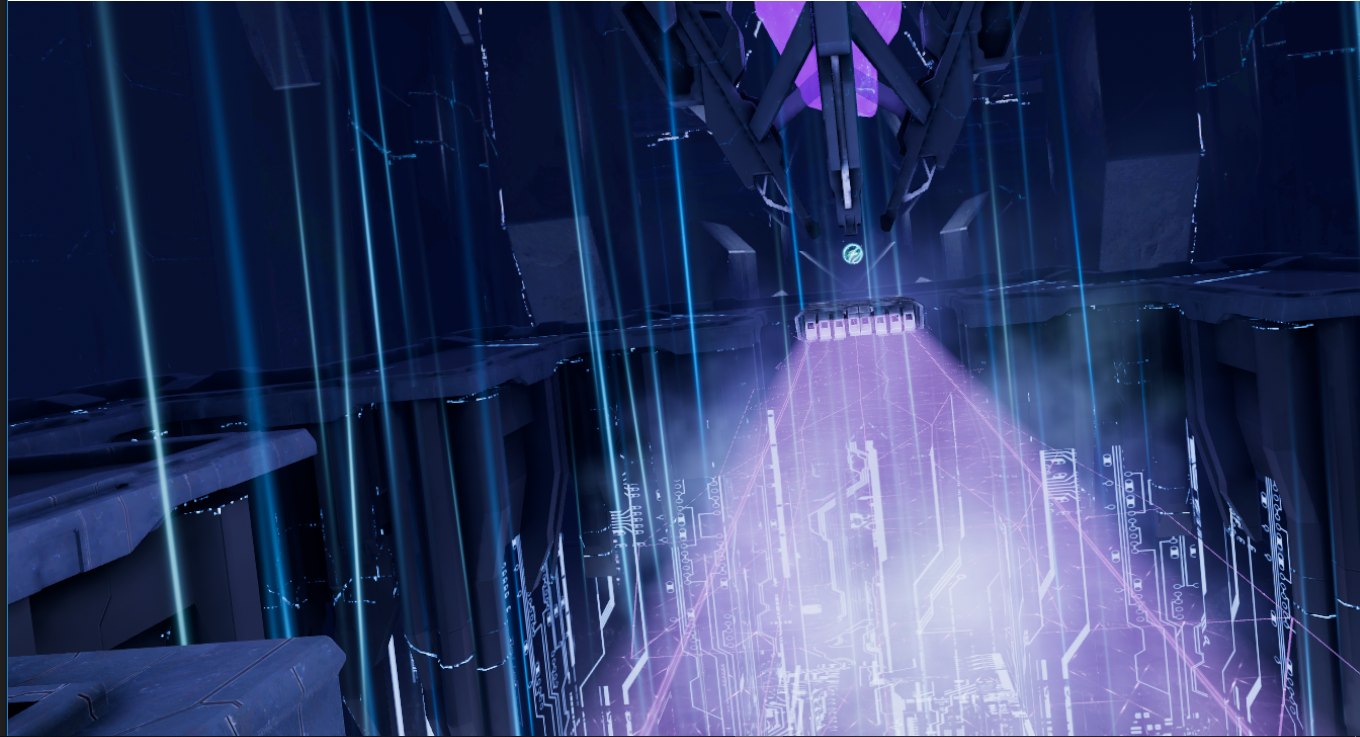 Brb, about to be transported to another world.

For a puzzle game to be great, the puzzles themselves had better be good, and they are. There are 35 different puzzles all spread out among three different areas. When entering a new area, the puzzles are at beginner level, meant to teach the player some new concepts. By the end of the area, the player will be required to have mastered these concepts if they want to move on to the next area. Puzzles will gradually become more and more difficult. 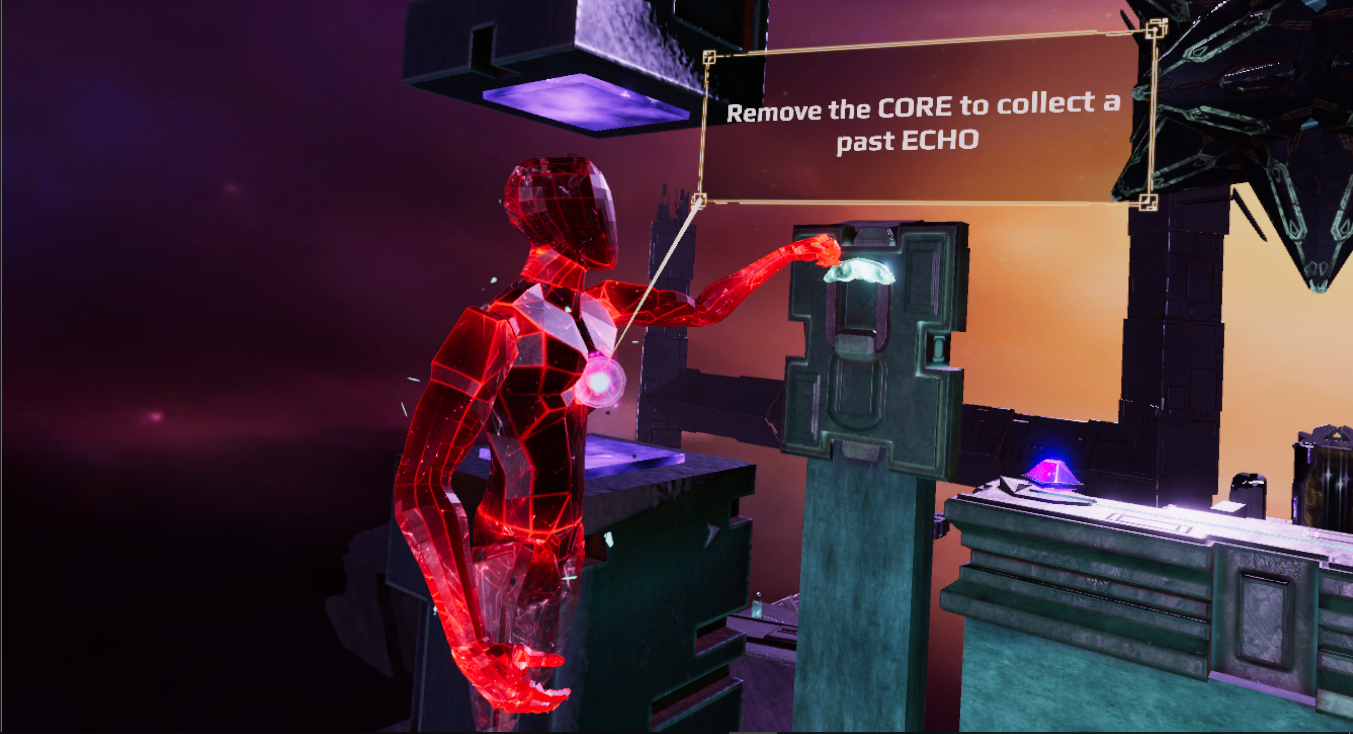 To collect more recordings, simply grab the core and pull it to yourself. This will give you the ability to record yourself even more.

The only critique I have is that some puzzles can be easily bypassed by a simple throw. For example, the objective of every puzzle is to insert a block or several blocks into their respective nodes in order to activate the strange power supply. Sometimes, the node is merely a block’s throw away and, if aimed correctly, the player can simply toss the block into the node and beat the puzzle in under five seconds, rendering the rest of the puzzle unnecessary to solve. I did this in several puzzles, thinking it wasn’t possible. But sure enough, the block fell right into the node and the power supply was activated. This is either simple neglect or perhaps the developers wanted to leave this option available to those who noticed it really is that easy. 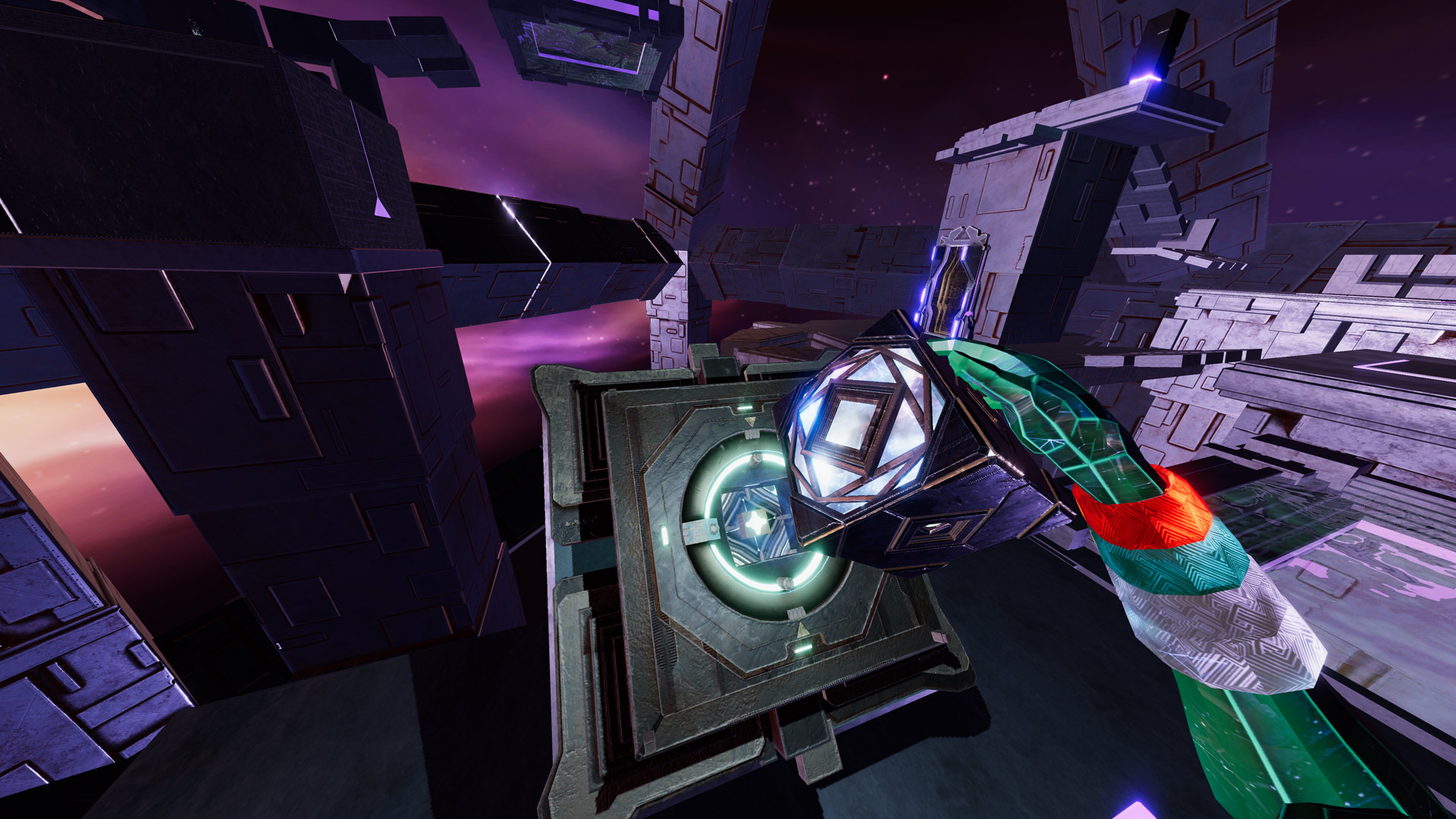 Solve puzzles by putting blocks in their respective nodes.

The soundtrack of Transpose is a treasure and easily one of the better indie soundtracks this year. With any sci-fi themed world, an electronic techno sound is assumed. For a taste of the atmospheric EDM tracks of Transpose, give a listen to one of my favorites, Spiral. The tracks will also become more full and other beats and sounds are added to it as you progress through the puzzle, letting the player know that they are going in the right direction.

I cannot praise Transpose enough for its atmosphere and general ambiance. When booting up the game, you are instantly transported to this intriguing world. At any time, you can look at the environment around you and admire the different details that are virtually present. You actually feel like you’re in a different world and it’s nothing short than amazing. 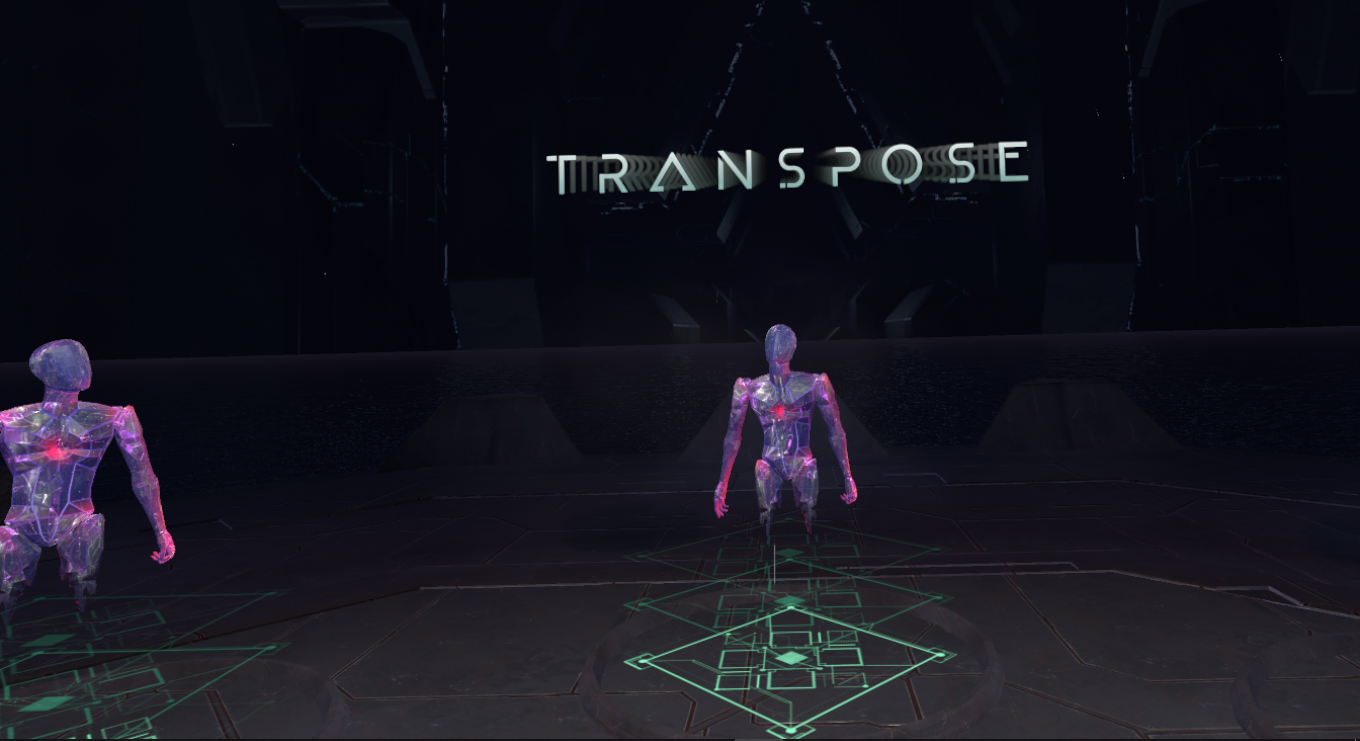 With my only qualm being with the occasional puzzle bypass, Transpose is a fantastic game and VR experience. At twenty dollars, it is well worth the time and money. Since nausea and dizziness are both frequent user experiences in VR, I do not count it against the game since it is expected. But, be warned. Transpose will absolutely make you feel sick. Take frequent breaks, drink plenty of water and enjoy yourself!

Transpose is a fantastic puzzle VR experience and will leave many wanting more. While it can make players temporarily disoriented, that only shows how creative the game can be. I highly recommend it.