Dontnod Entertainment’s hit 2015 game Life is Strange was a welcome surprise in the gaming community when it was released. Players enjoyed exploring the inconspicuous town of Arcadia Bay as Max Caufield, interacting with a diverse cast of characters, and watching as the choices they made throughout the game resulted in unique consequences for the plot. Life is Strange received an incredibly positive reception, as did the franchise’s second season in 2018. I’m a big fan of the original Life is Strange game, and Dontnod has been on my radar ever since I had completed it. When Twin Mirror was announced and looked as though it would have a similar aesthetic and gameplay mechanics to Life is Strange, I became intrigued and was looked forward to seeing if this would live up to its predecessors. So, does Twin Mirror match the caliber of Life is Strange, or does it not quite meet the mark for Dontnod? 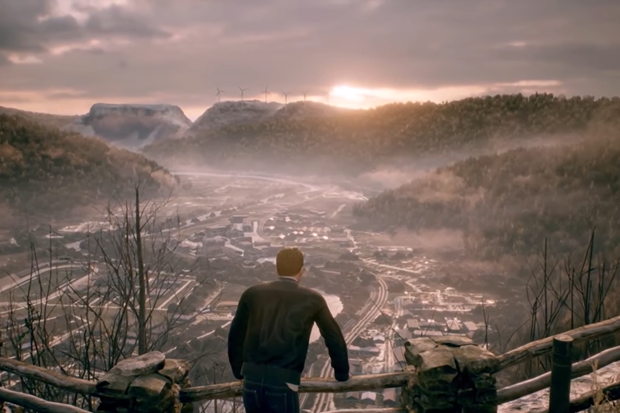 Violence: Twin Mirror displays a moderate amount of violence throughout its story, with blood splatters shown on clothing, walls, and floors in certain scenes. Deaths by gun violence are depicted on-screen and a character is shown being killed in a violent car accident. Punches are thrown by antagonistic characters if the player makes certain dialogue choices.

Sexual Content: Two characters are shown to be intimate with each other while not being married, although no sexual actions are overtly shown. Divorce and infidelity are displayed, although the consequences and harm caused by them are also shown.

Language/Crude Humor: Sexual innuendos and foul language are sprinkled in characters’ dialogue; expect to hear f***, s***, d***, b***, and taking the Lord’s name in vain as you interact with other characters or yourself in the context of the story.

Drug/Alcohol Use: Characters drink at a bar and becoming inebriated, with the main character specifically waking up after a binge session with no memory of the previous night. One character is revealed to have an opioid addiction that affects her relationship with her daughter, and a drug operation involving several characters is revealed to be taking place in the city.

Other Negative Themes: The main character breaks and enters several locations in order to gain access to information related to the plot, as well as orchestrates a major vandalism scenario that destroys another character’s artwork as a distraction.

Positive Content: Although the majority of citizens are unhappy in their present circumstances, they nonetheless show loyalty to their city and to each other. The main character can encourage stronger ties between characters through dialogue choices, and can give more empathetic responses in many circumstances through those choices. Relationships are the heart of this game, and the more often you listen to the problems of other characters, the more likely they will open up and give you the information you need instead of stonewalling you. A character owns property that she uses to help drug addicts and lost souls recover and find themselves, and is noted to be well-respected in the community because of her actions.

This game is rated M for Mature 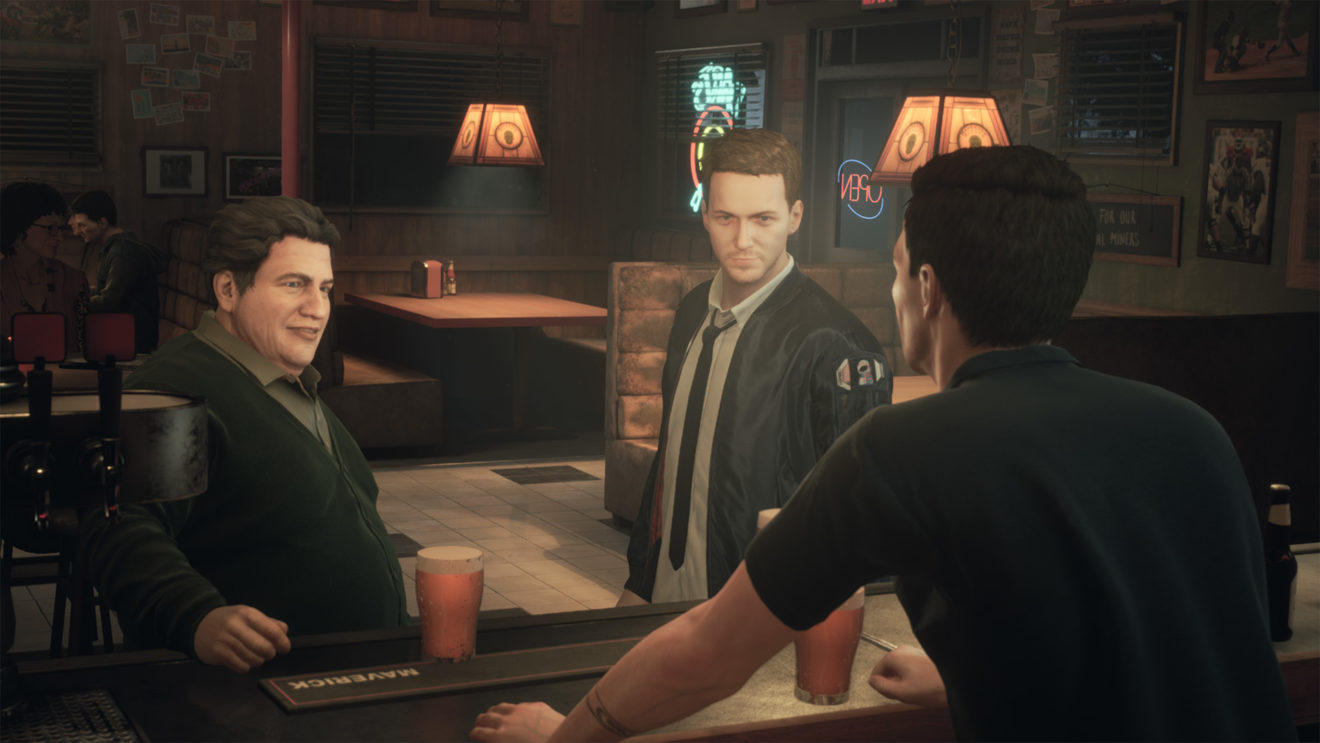 Twin Mirror takes place in Basswood, a quiet mining village in West Virginia. You control Sam Higgs, who is returning to his hometown to attend the wake of his best friend and fellow journalist after he is killed in a road accident. Returning to Basswood isn’t easy for Sam, as most of the populace loathe him after he wrote an exposé that resulted in the permanent closure of the town’s mine, resulting in the loss of many jobs. As Sam attends the wake and reconnects with both friends and rivals, he grows suspicious about the circumstances of his friend’s death and becomes determined to uncover what really happened, as well as who might be involved.

Sam can’t uncover this mystery on his own, however. He is often accompanied by a look-alike, known in-game only as ‘Him’, that only he can see, and who will often give feedback as to what choices Sam can make; these are often well-meaning choices, but can help or hinder Sam’s investigation depending on whom he is interacting with. Sam also has the opportunity to reach out to old friends and coworkers during his investigation, and one of these includes an old flame, whose break-up with him caused him to leave Basswood in the first place several years prior to the game’s beginning. It soon becomes clear, though, that there is more to this sleepy town than meets the eye, as Sam uncovers more and more disturbing evidence. Your decisions as him are crucial in determining whether he is able to uncover what is needed before more innocent people are killed, or if he misses the culprit still roaming free in the town. 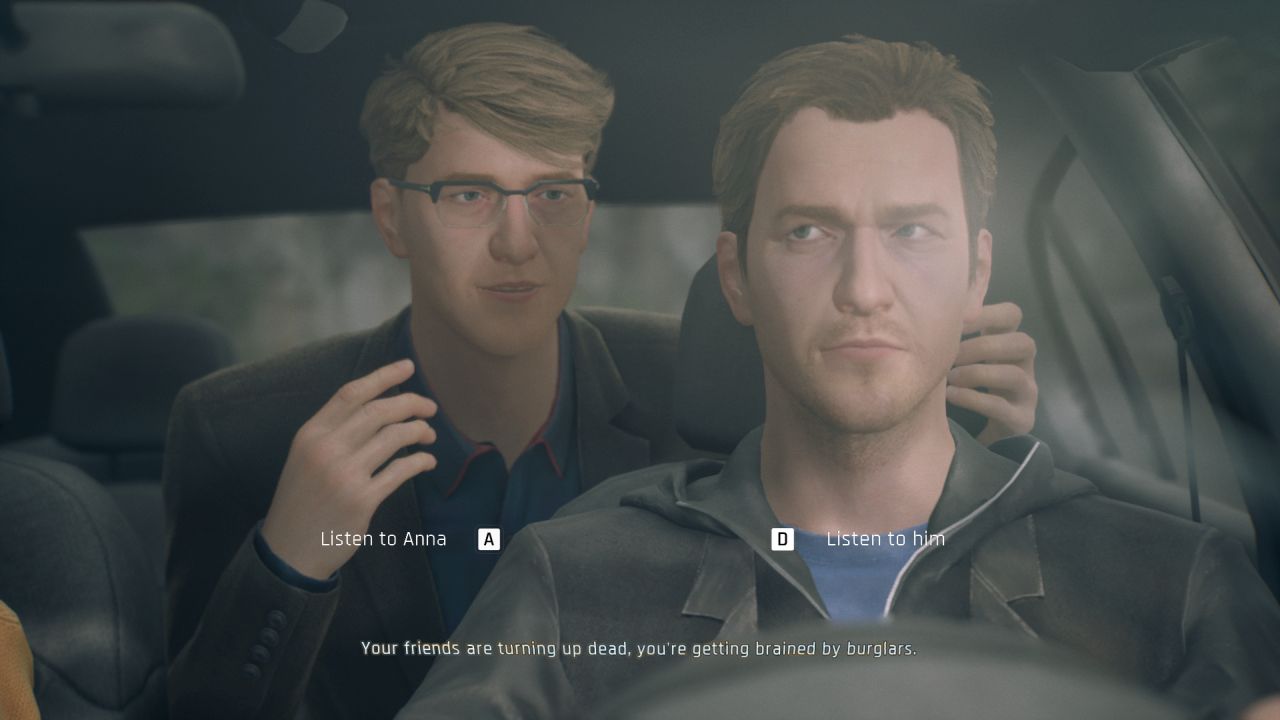 The gameplay is similar to other Dontnod titles, as the player can interact with the environment and collect items that may add context to Sam’s relationships with other characters or connect to the plot. You can view these objects and their personal value in the menu, which also updates the info on the cast of characters. Learning more about the characters you interact with can better inform your dialogue choices and decisions. Sam can be played as sardonic and cold, or patient and as someone who is trying to make amends, based on the dialogue that you choose. A choice may seem insignificant here and there, but as the pieces of the puzzle come together, it’s important to keep your wits about you as not everyone in Basswood are who they present themselves to be. There are five different endings in Twin Mirror, and your choices determine which one you get.

Sam is naturally a logical person and will often retreat in his mind to solve problems and relive core memories. Dubbed ‘The Mind Palace,’ this is where the player will determine different scenarios to piece together and figure out what happened, which will in turn uncover more clues. The Mind Palace itself is not too difficult to use once you find all the clues that you need to unfold an investigation or plan a course of action, but finding the items takes a little bit of observation and digging around. The plot won’t move forward until Sam is able to reach a practical hypothesis based on the clues and sequence the actions of the event he is investigating. There aren’t too many Mind Palace levels that the player will encounter, but they are necessary to complete and I found them the most tedious part of the game. 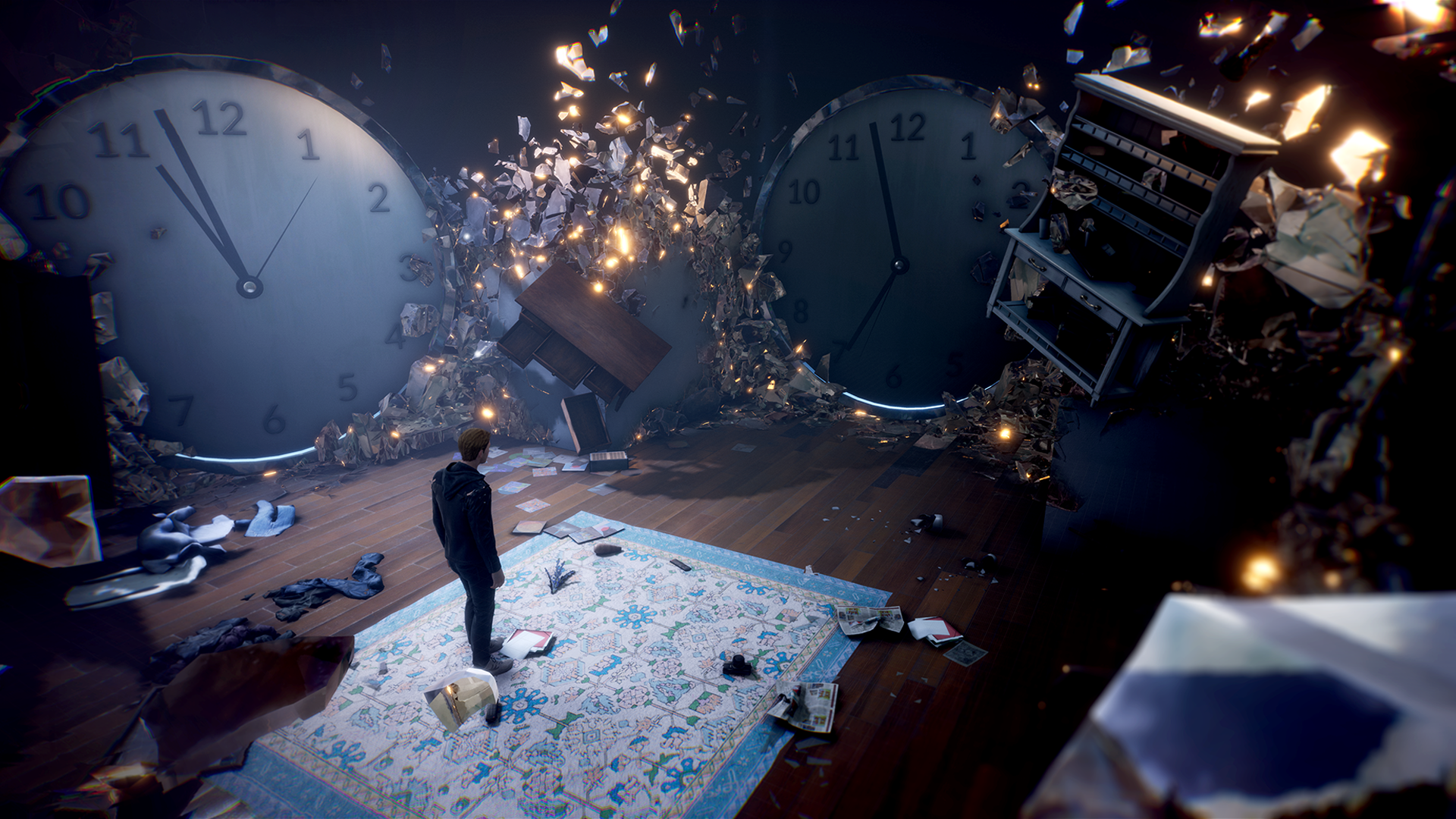 The visuals of the game are topnotch and take a lot of cues from the Life is Strange series, which I immediately connected with. I love Basswood’s realism, from historical and personal markers that can be observed, to the minute details I saw in different places Sam visits, such as Basswood’s local pharmacy or café. This works to the game’s benefit, as the aesthetics made me want to explore every nook and cranny of each area to learn more about the town and the people who lived in it. This in turn led me to finding clues that were needed to connect the dark events and direct me toward the next section of the story.

The same can’t exactly be said for Twin Mirror’s characters, however. I really wanted to like these characters, especially since they are aesthetically and personably diverse compared to a lot of other games, similar to its sister game Life is Strange. Despite the wide cast and Sam’s continuous inner monologue, I failed to develop a deep connection with Sam or any of these characters. I’m still not certain as to why I didn’t connect with them, but I suspect it has to do with Twin Mirror focusing more on flash overall instead of substance. Even when flashbacks were shown, they felt disjointed and sometimes the characters in those flashbacks behaved differently than they did in the present. The story and Sam’s investigation likewise felt all over the place. The culprit of the story, when revealed, didn’t make any sense to me as I didn’t observe any proper clues to that character being the antagonist, and yet I was expected to confront them. If the writing were better polished and much tighter, the cast would have been more interesting to engage with, and the story would have been easier to follow. 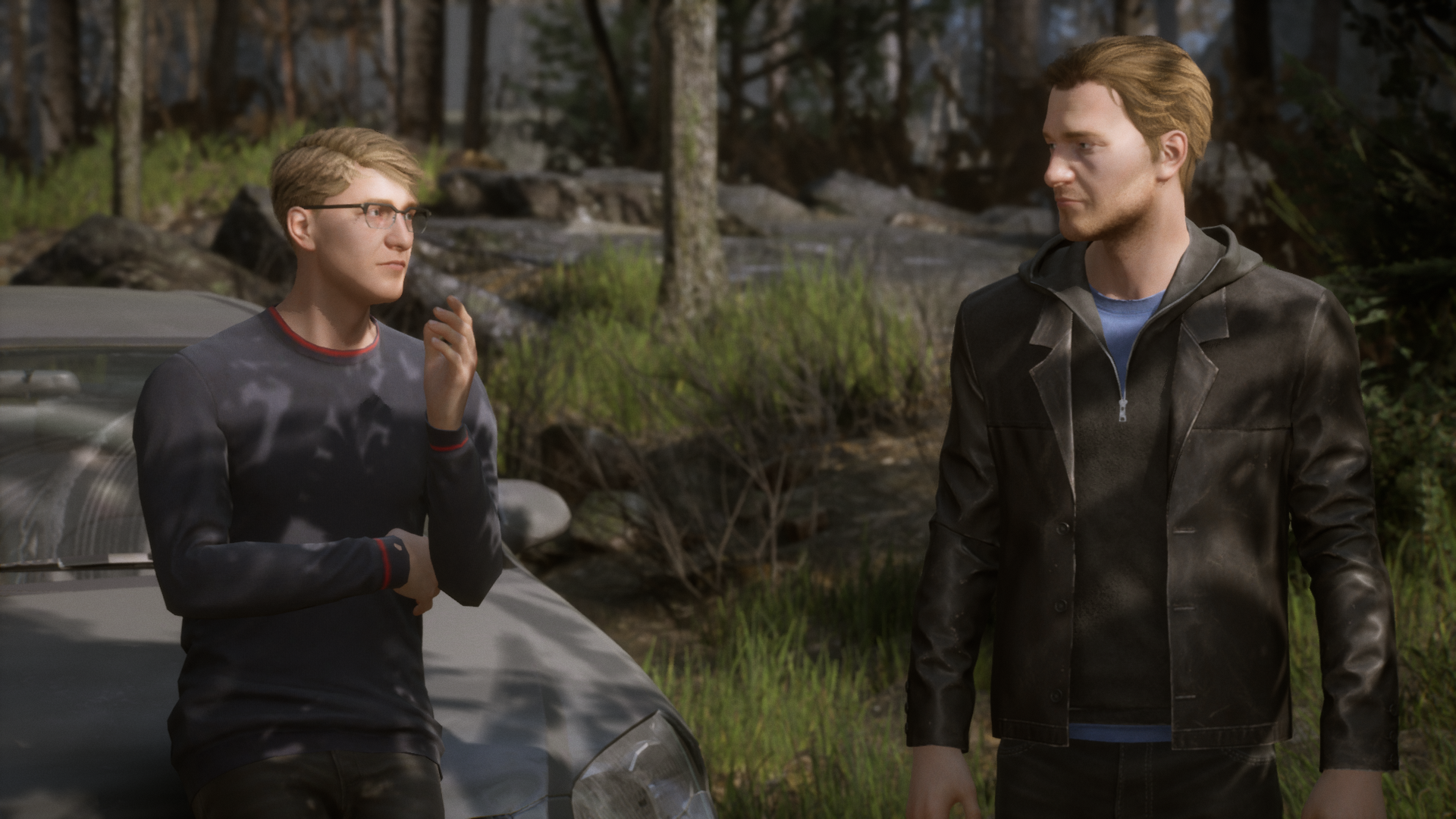 In conclusion, although I can’t say I enjoyed this to the same capacity as Life is Strange, Twin Mirror does contain enjoyable features, and I hope Dontnod continues to utilize them. I love the realism the game offers with the city of Basswood and the numerous details that you can find throughout the game. That being said, Twin Mirror has a number of cons that stunted my enjoyment of it. The story and characters weren’t as polished as much as they should have been, which caused me confusion as to the identity and motivation of the true antagonist, as well as Sam’s own personal development, or lack thereof. If you’re looking for a game similar to Life is Strange, then I think it is worth a playthrough at least once, but it doesn’t quite hold up to the same standards.