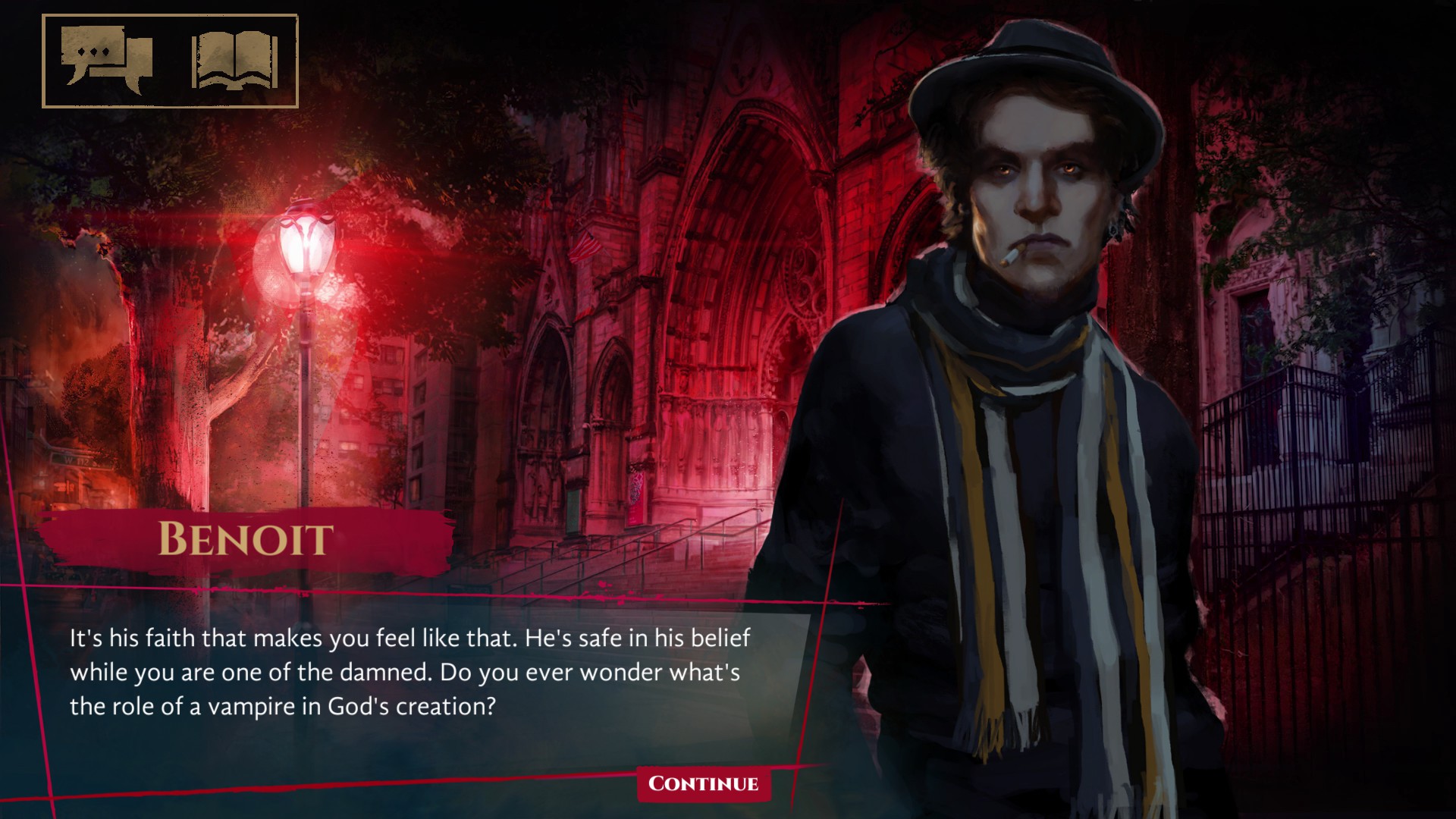 If I ever meet a vampire, I will consider their place in God’s kingdom. But for now? Fiction.

Spiritual: As Vampire: The Masquerade—Coteries of New York obviously involves vampires, gamers should expect to read about fantastic feats beyond human ability. Players will be required to feed on human prey, lest they fall victim to what is called “the Beast,” where otherwise civilized kindred become feral. 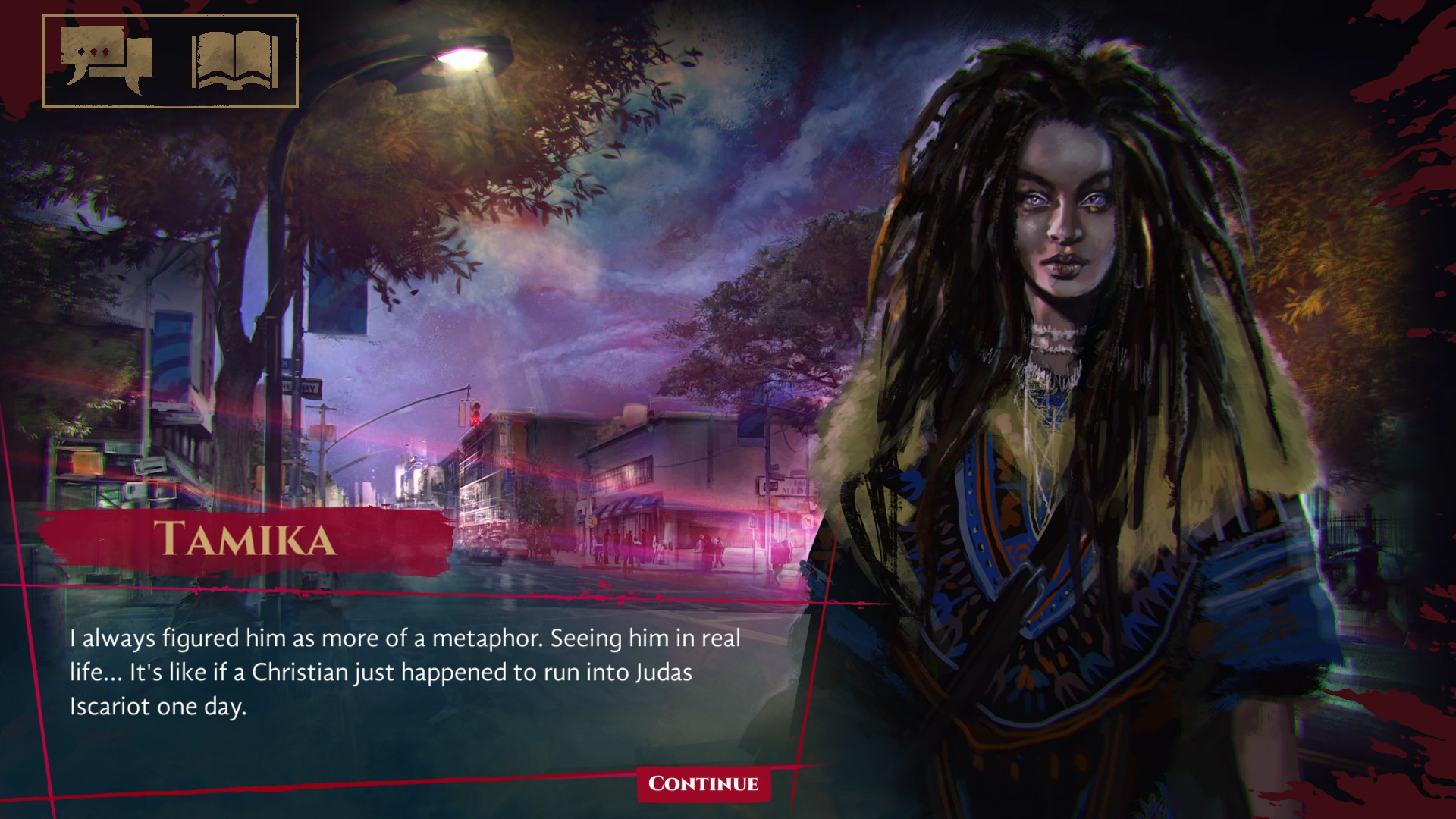 This reality is not beyond reflection. Coteries of New York establishes that vampires can only be killed by fire and weapons blessed by the truly righteous, the rarely holy. One intriguing character invites the player-character to meet them at a church where the mere presence of a specific priest emits a dangerous aura. Conversations with this character ensue concerning whether or not kindred are cursed or blessed creatures, and how they fit within God’s creation.

Alternatively, an entire clan of vampires is devoted to dark arts such as blood magic. I did not spend much time with this clan. 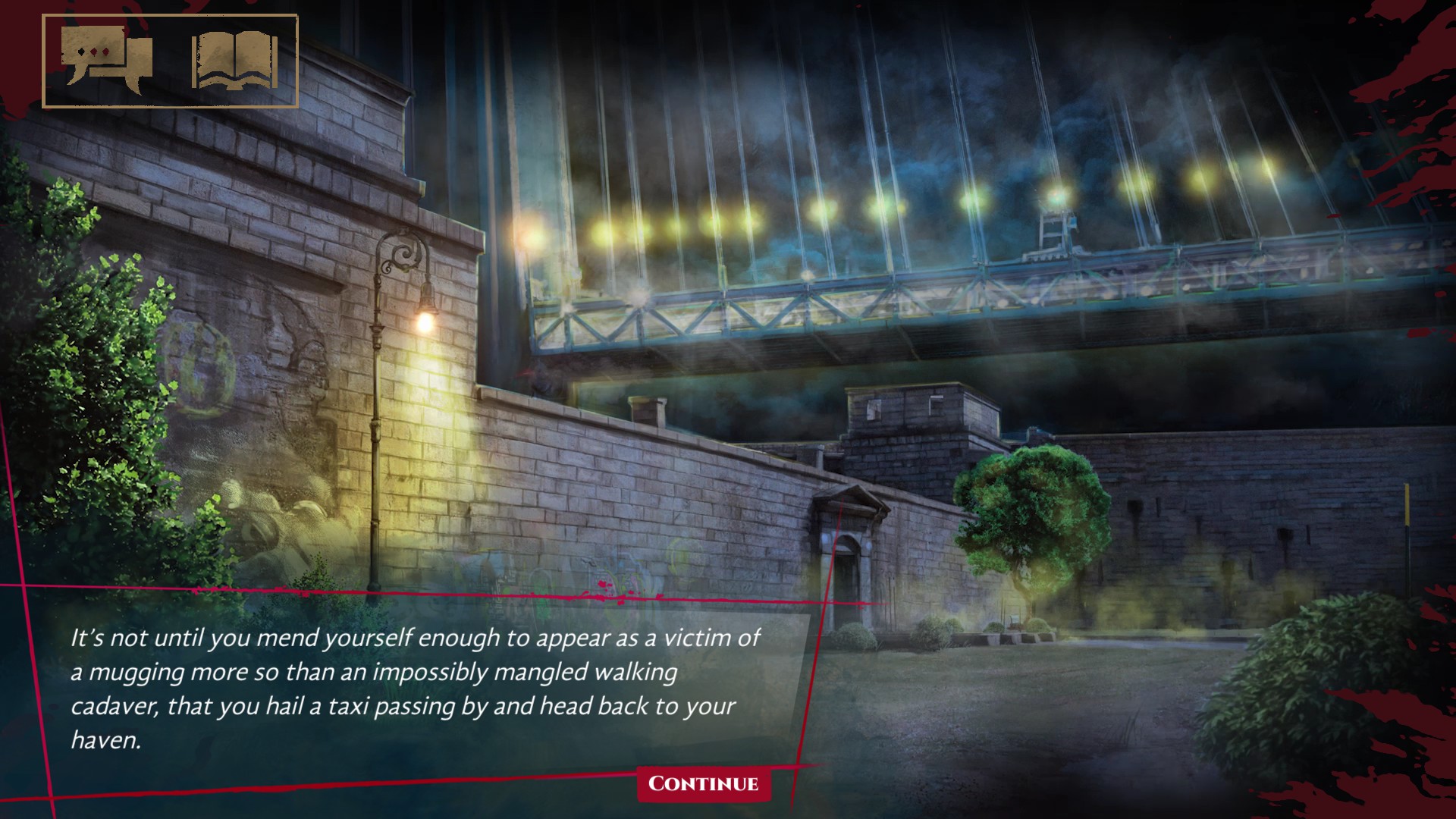 Wolverine would be proud.

Violence: The violence in Coteries of New York is literary. It at times describes gunshot wounds and severed limbs, but I did not see any. Pools of blood and other bodily harm is within the realm of possibility, such as a vampire getting “staked,” which does not kill them, but leaves them in a state of paralysis until the stake is removed.

Language: In this regard, Coteries of New York is M-rated. Expect a full-array of profanity like a blue-collar break room. 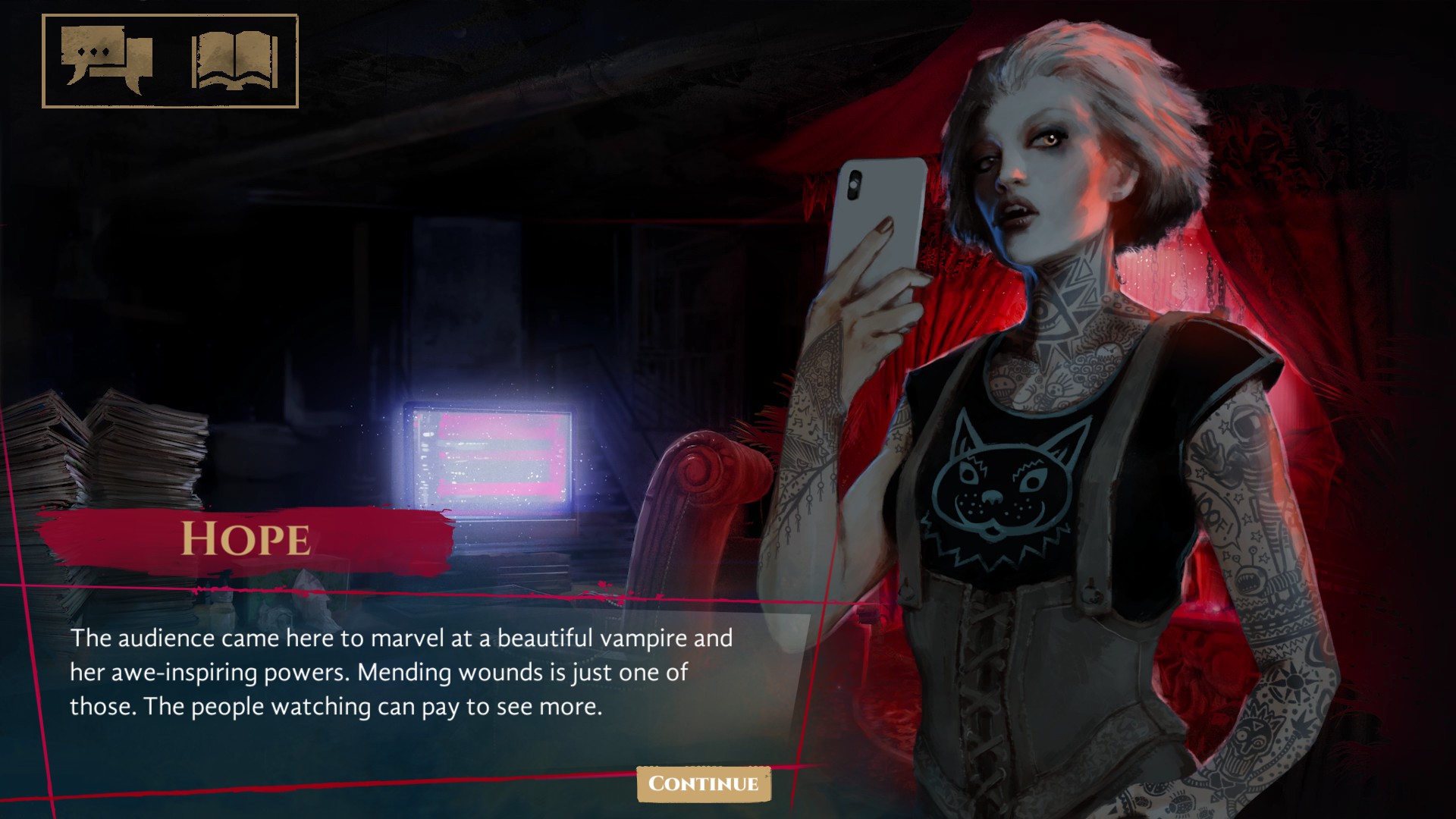 Hope would if she could….

Sexuality: Vampire sexuality is difficult to explain without the proper terminology, as it is not the same as human sexuality. For example, two vampires generally do not become aroused for traditional sexual purposes. However, experienced kindred may be able to attune their bodies to go through the motions. 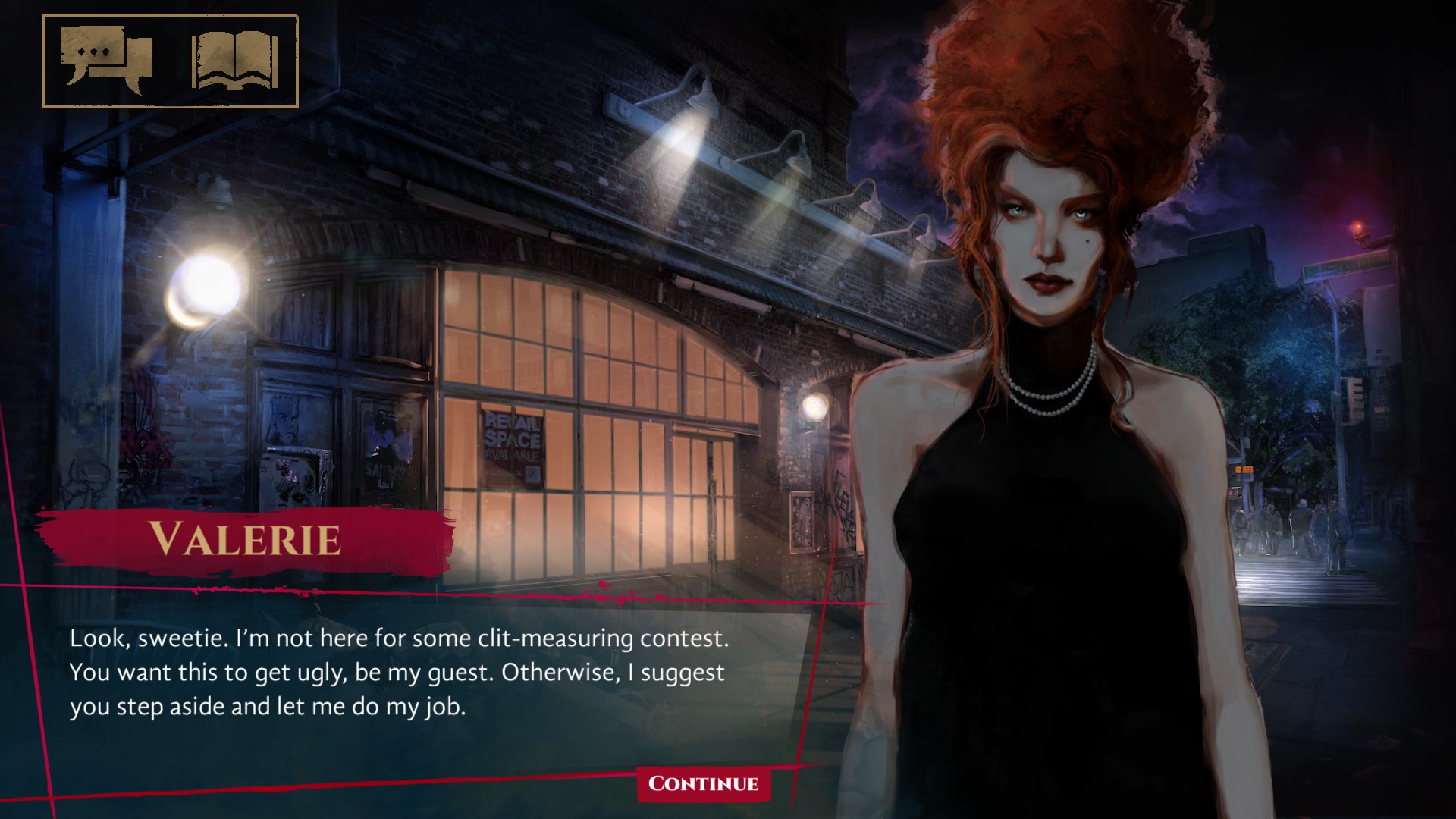 In the world of vampires, kindred may form a “blood bond” by exchanging blood. Beyond this, Draw Distance has designed almost every character in the game to appear attractive, sometimes emitting an aura of affinity; only the Nosferatu clan is known for their hideousness. 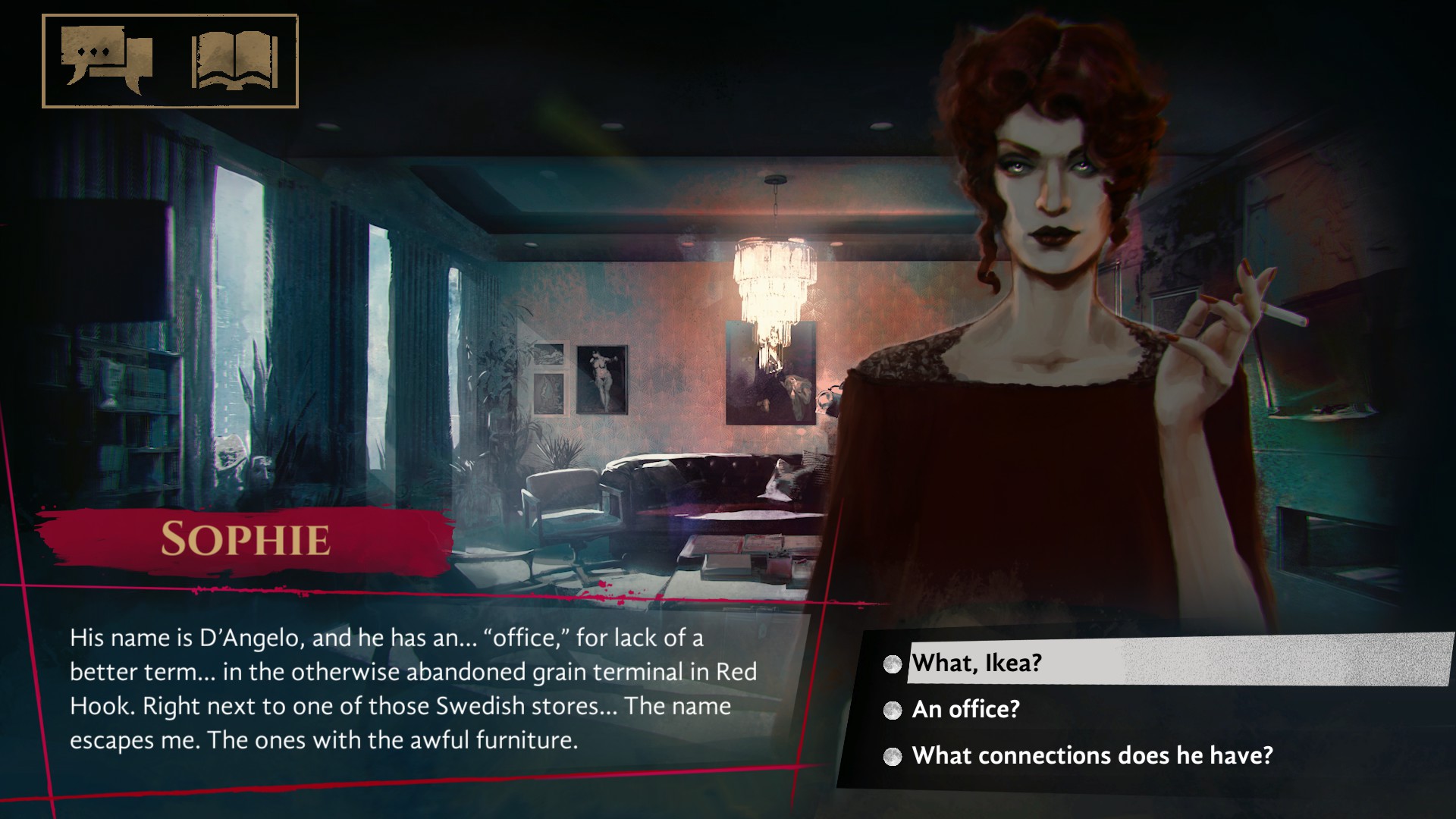 Virginia Slims for the sophisticated vampire. Also, why they gotta trash Ikea like that?

Drugs and Alcohol: Do hemoglobin and plasma count? Because while the game contains alcohol, vampires are immune to that specific toxin. And while kindred do not breathe, a few of them have taught themselves how to smoke cigarettes anyway.

Choose between three characters and their clans. I made my choice for obvious reasons.

Lamar’s background story reminds me of what I experience when I peruse the profiles of creatives on Twitter, Instagram, Pinterest, and Deviantart: he exudes of anxiety, cynicism, and fatalism. If “starving artist” were an occupation, he would be marked on his yearly evaluation as “exceeding expectations.” His sister, Emma, slips him a few bills when he mentally evacuates into his indeterminably melancholic journeys.

I would imagine a man of his creative faculties to be cognizant of when the wool might be pulled over his eyes, yet there is something irregularly entrancing about the man who takes an interest in his artwork. Before he knows it, Lamar is in the man’s own quarters to…discuss. That part—his perplexing willingness to accompany a stranger to his room—Lamar remembers. Yet he cannot recall when he lost consciousness, or from whence came the incapacitated girl in the bedroom. A hunger that does not originate from his stomach overcomes his delirium, and he satiates himself on the girl until she is completely dry. A different mystery man arrives at the apartment, and takes Lamar to a room that functions as a safe house, but resembles a prison. 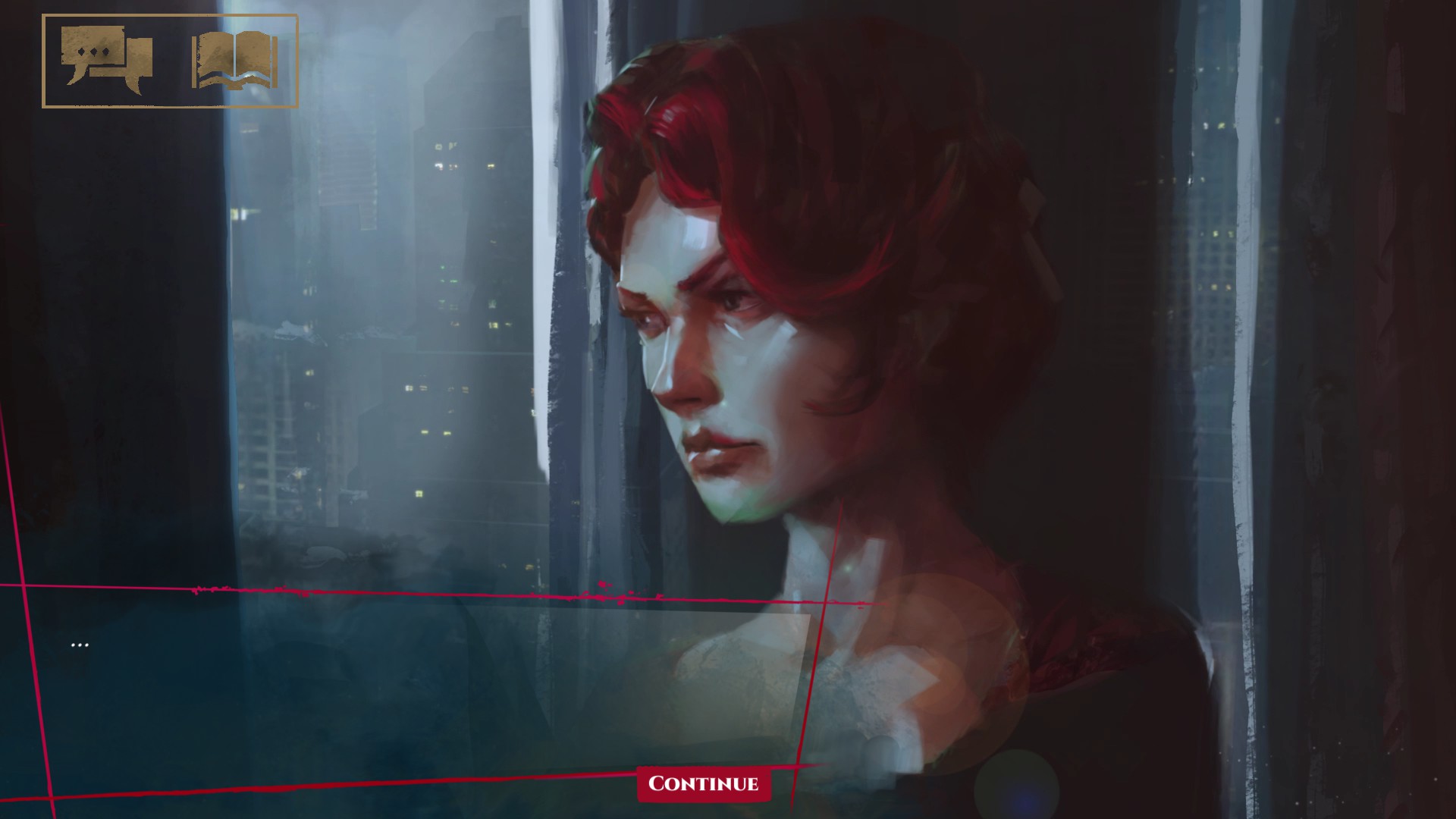 Sophie broods about her bold moves.

After experiencing a torpor that feels like an eternal slumber, the man, later identified as a Quadir, takes Lamar to an art gallery similar to his own. There, he is sentenced to death, for according to the rules of the Camarilla, no fledgling can be sired without the permission of the sect’s Prince, nor can a fledgling live unless a sire claims them. Before Quadir can swing his sword around, another named Sophie steps forward on Lamar’s behalf. To the chagrin of a couple-dozen onlookers, Quadir sheathes his sword. 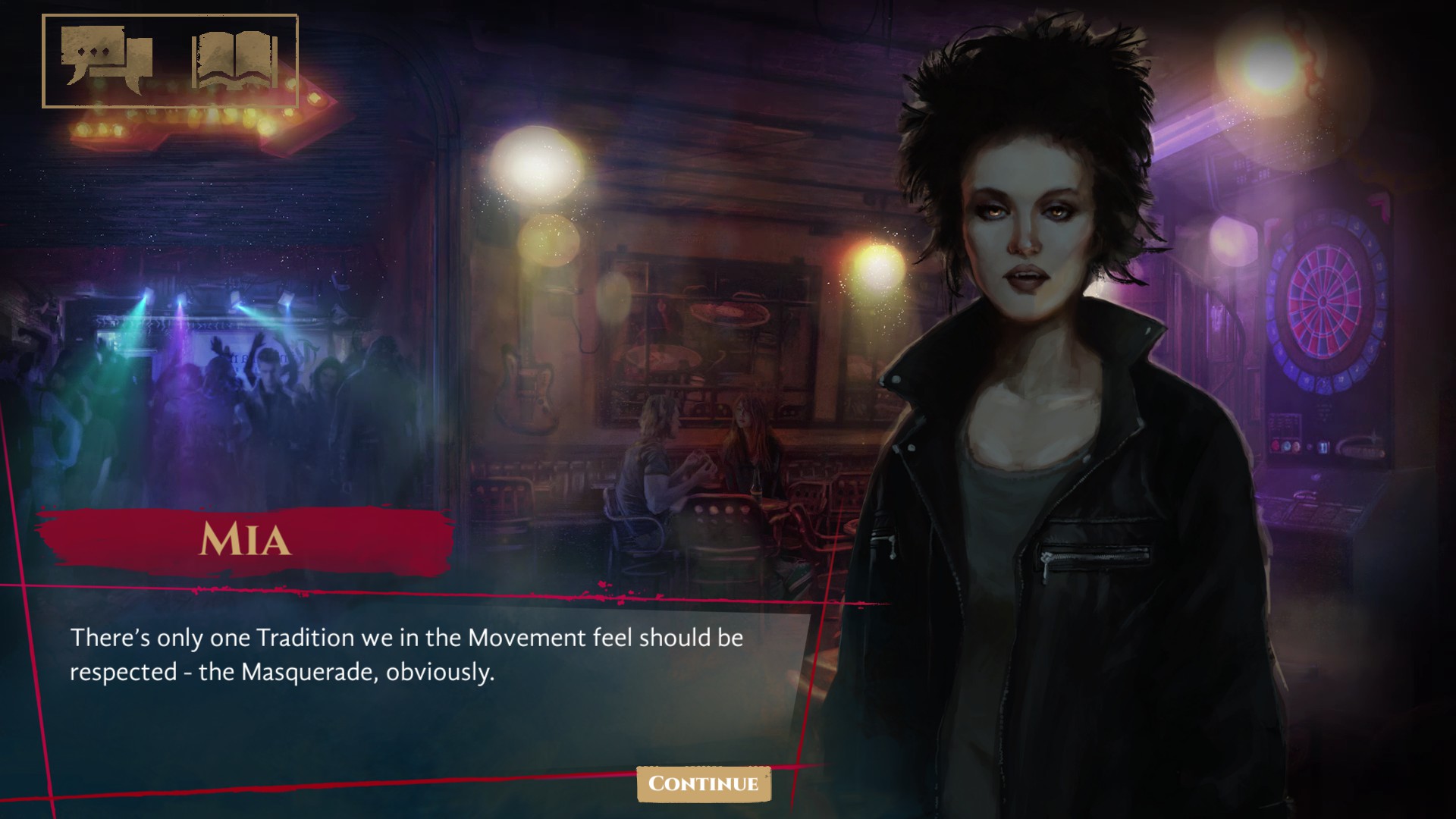 Mia is part of the Anarchs, who operate outside of the rule of the Camarilla.

What does Sophie want in return? Complete obedience, but this is not the same as obsequiousness. She actually advises Lamar to form his own coterie, which he will need should a moment of crisis requires allied intervention. She suggests a few names worth investigation; the main gameplay element of Vampire: The Masquerade—Cotaries of New York comprises of following up with those individuals.

Adelaide shows up uninvited to Lamar’s haven with jokes…and a snack.

To its credit, I only felt that I wasted half of my night in Coteries of New York when I choose to follow-up with a paparazzi creeping on Sophie, and that is because the contact is not a vampire. Otherwise, this game’s infiltration into the fictional universe of vampires is fascinating. The entire enterprise of “the masquerade,” consists of how vampires can nocturnally live among humanity while remaining undetected, lest the Second Inquisition hunt them with incendiary rounds. I only know that “the masquerade” is a specific term because the developers at Draw Distance have made it easy for newbies like me by including codex defining additional terms like “sire” and “fledgling,” as well as providing background information for factions like the Toreador, Brujah, and Gangrel. 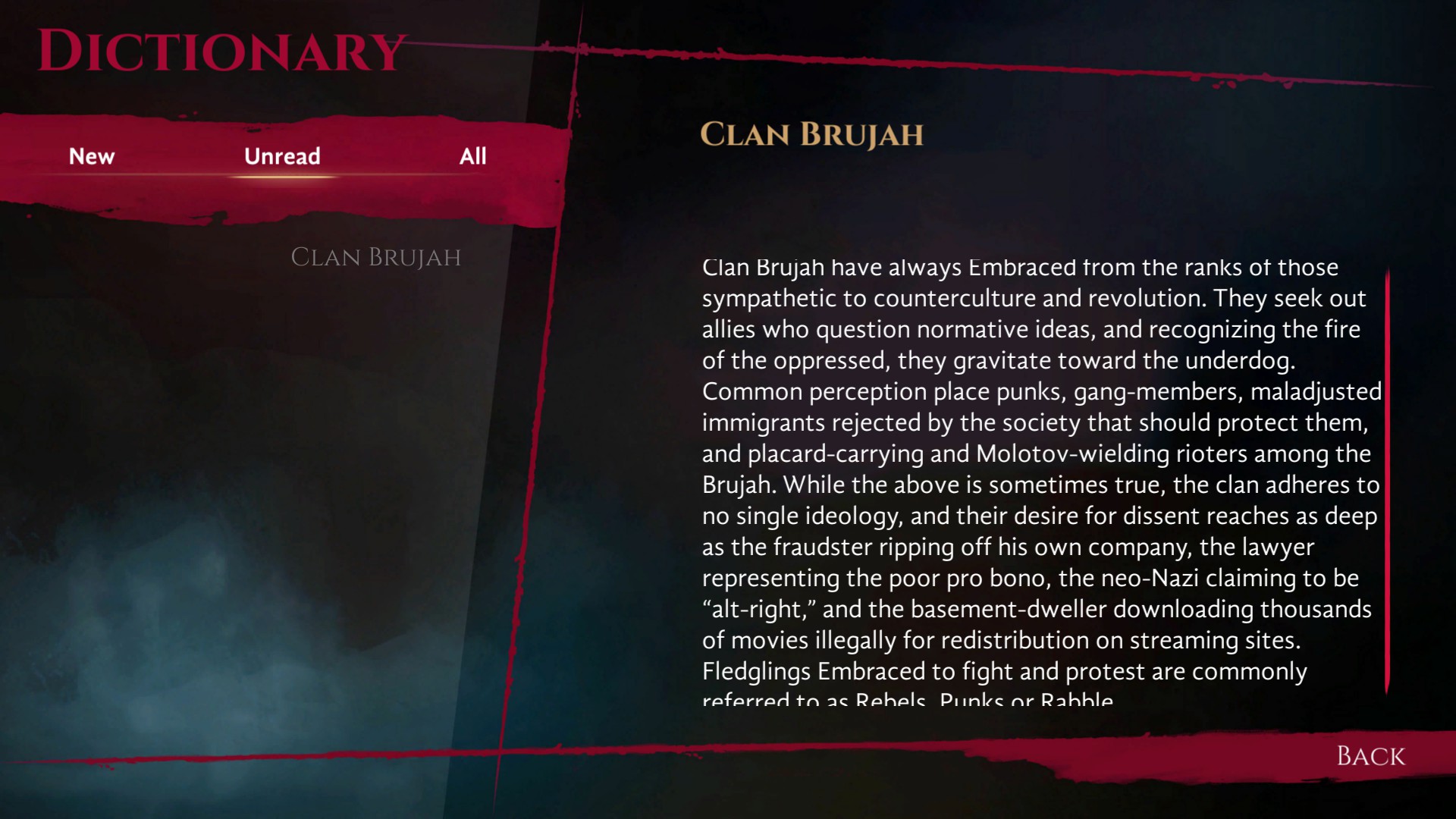 Folks better prepare themselves to do some reading! This is a visual novel, after all!

Readers who know zero about The Masquerade (italicized this time in reference to the franchise) can consider themselves initiated with Cotaries of New York. Conduct some detective work, moderate a cam girl’s chat room, or stalk the night while fighting for freedom—all of these and more are possibilities within the narrative. I just wish I could have 100% the game within one playthrough, for my game ended before I could finish a few plot lines, forcing me to perform multiple playthroughs. The problem is, like Dragon Age, my initial choice of character is more symbolic than meaningful, as all choices inevitably lead to the same end. Even so, the journey is what matters, and Coteries of New York is a good primer before Vampire: The Masquerade—Bloodlines 2 releases later in 2020.