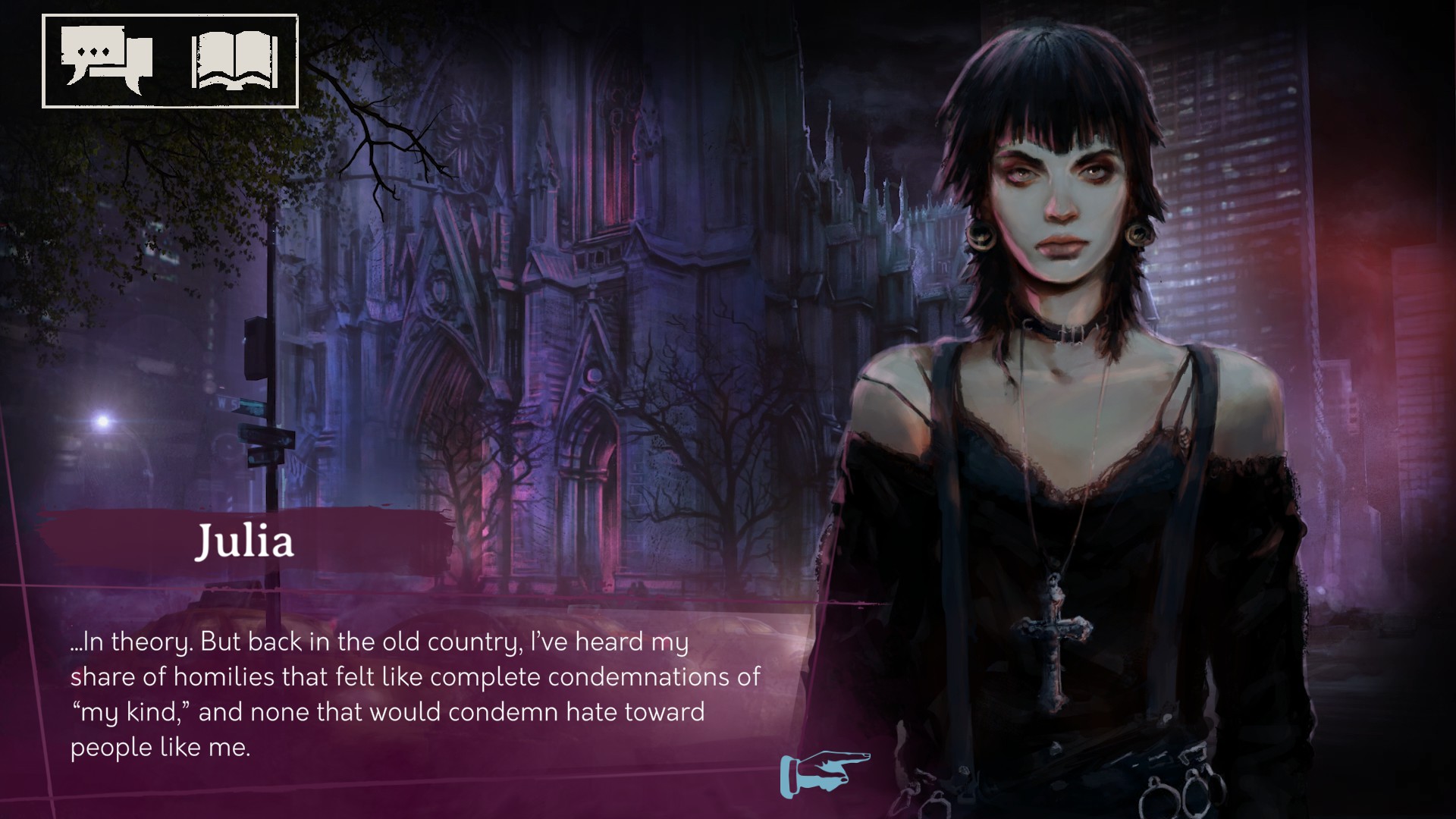 I wonder how can the Church do the work to become inclusive rather than alienating?

Those interested in playing Shadows of New York should reference the content guide in my Cotaries of New York review to gain additional insight as to what Draw Distance’s latest has to offer as a visual novel experience. Here, I attempt to address elements unique to this game. Additionally, please note that I will be using proper Vampire: The Masquerade terminology throughout this review; readers unfamiliar with the World of Darkness should turn back to the introductory visual novel. 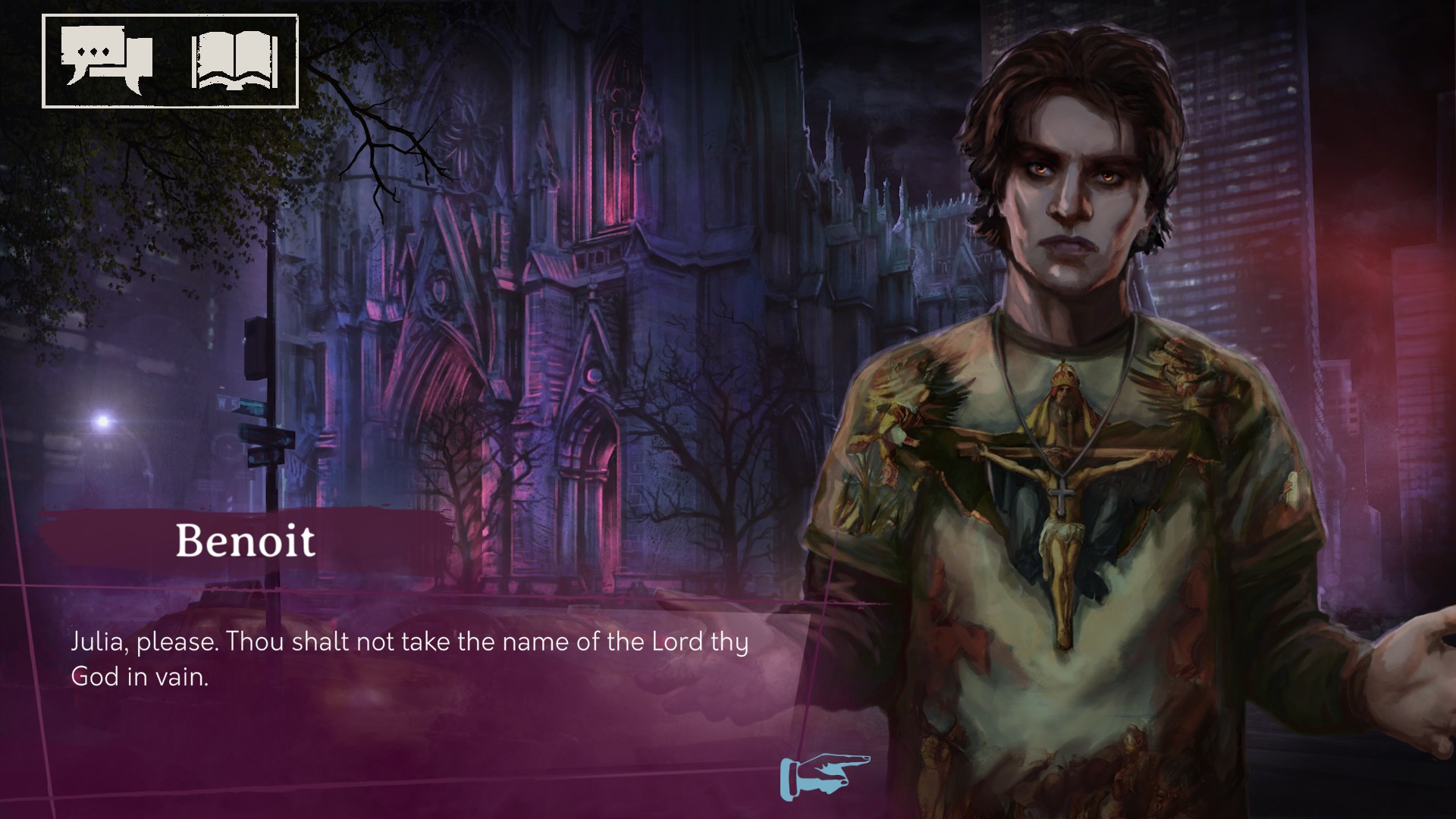 Spirituality: Players will embody a fledgling who has been embraced into clan Lambrosa, a shadow organization that has exploited the Roman Catholic Church like a marionette since ancient times. The main character finds herself verbally jostling with fellow Kindred Benoit, and human local diocese Father Leonard, who are both complicit with the Lambrosa, on the topic of faith and Christian iconography. 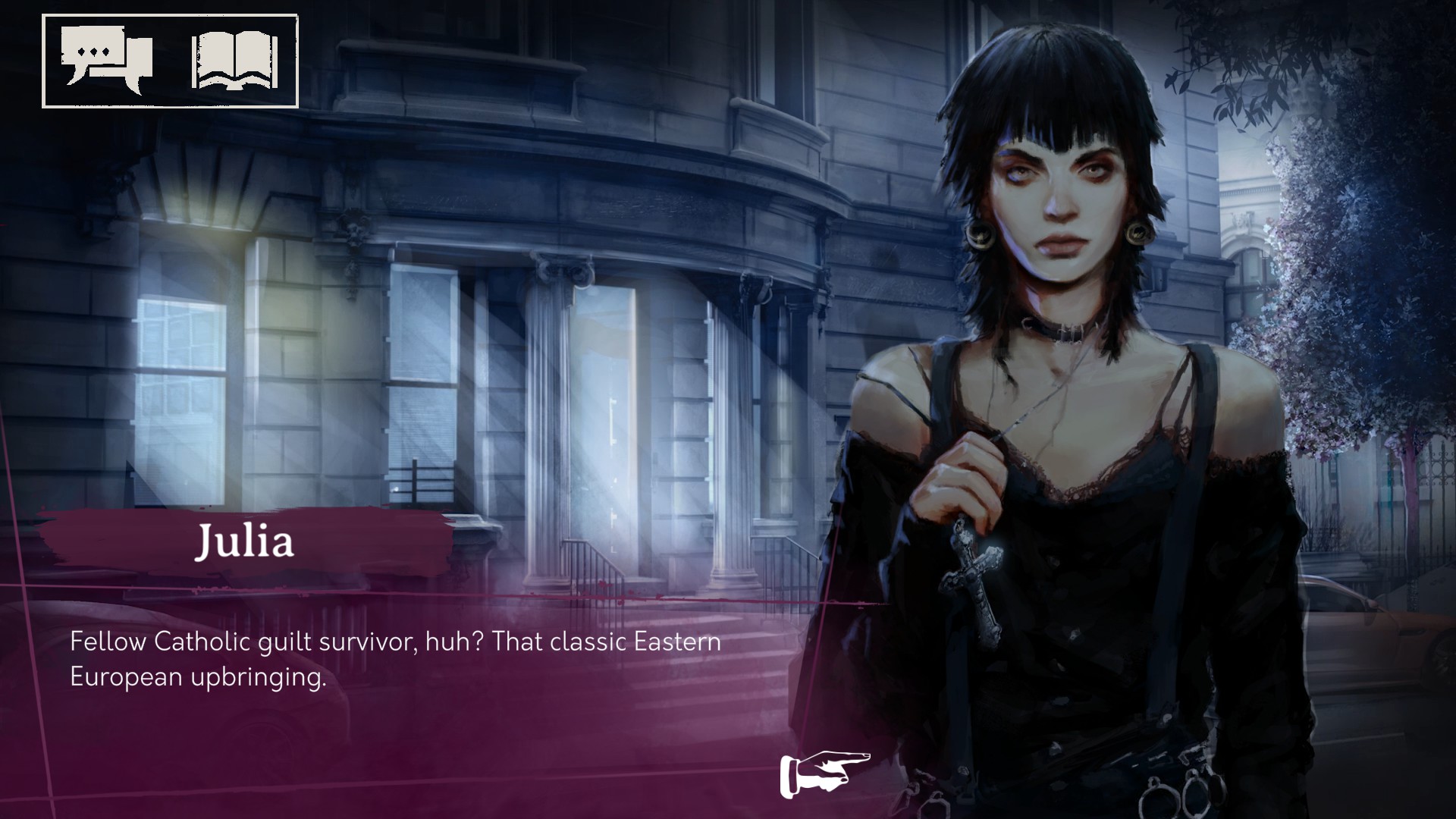 The main character is what I call “culturally Catholic”; she was born into the faith as part of her Polish ancestry, goes through the motions of visiting church as an occupational habit, and wears an ornamental cross for style than for faith.  However, in defense of her lapsed discipline in Catholic ritual, she recalls the memory of an LGBT man who was scourged, and subsequently found peace in God in a way that struck her as madness. 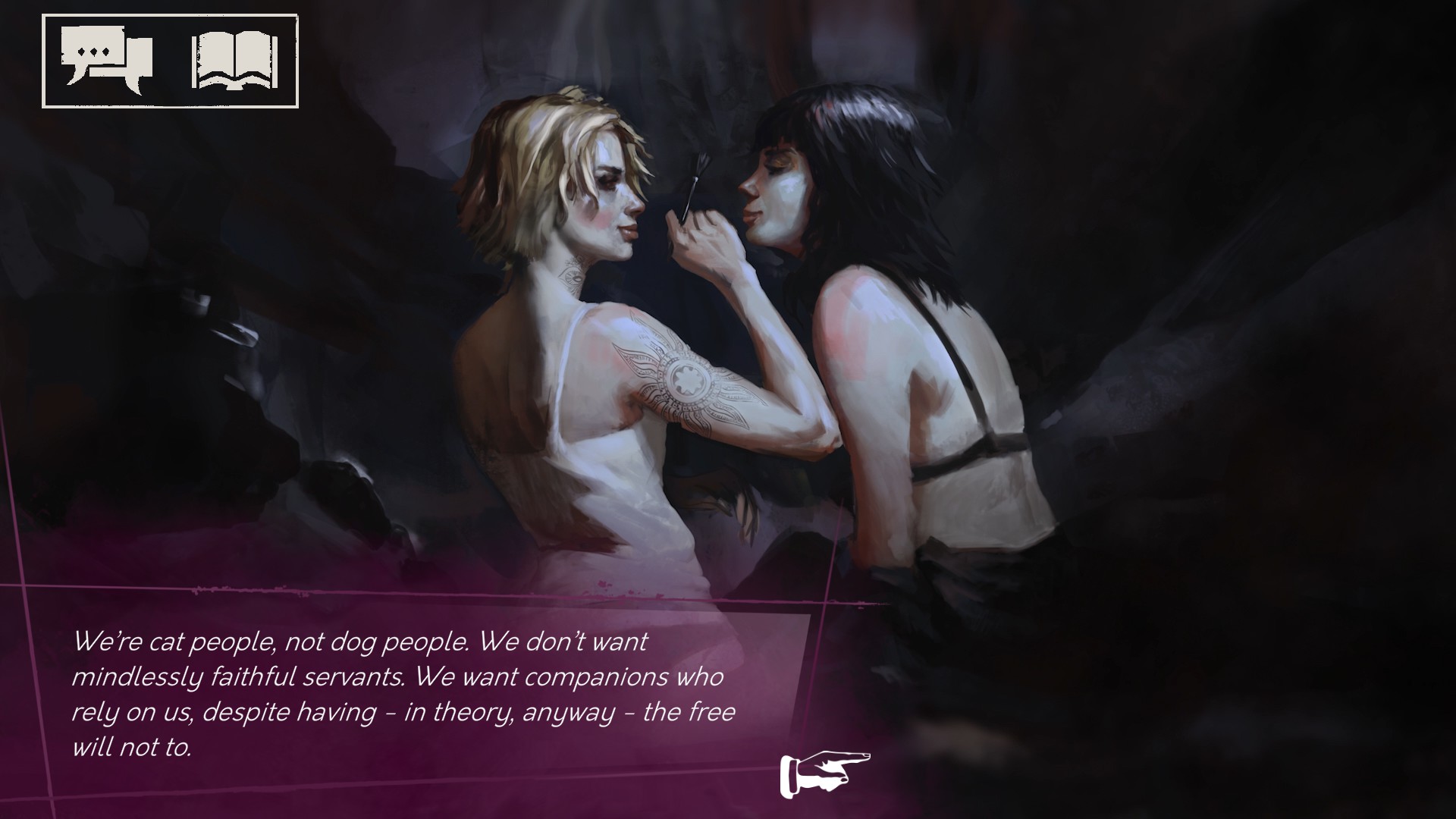 The Lambrosa (allegedly) cannot cast reflections upon any surface, so the main character’s paramour keeps her human around to keep her Goth facemask on point.

Sexuality: If one were to compile a list of incontestably queer games, it would include the likes of Gone Home, Dream Daddy, The Last of Us 2, and Shadows of New York. Prior to her embrace, the main character was in a same-sex relationship. Her girlfriend seems to hang around because of the kiss, and maybe also because of her intelligence and eternal youth. As I learned in Cotaries of New York, Kindred do not maintain traditional sexual relationships, so what these two characters have going on is most certainly…queer. 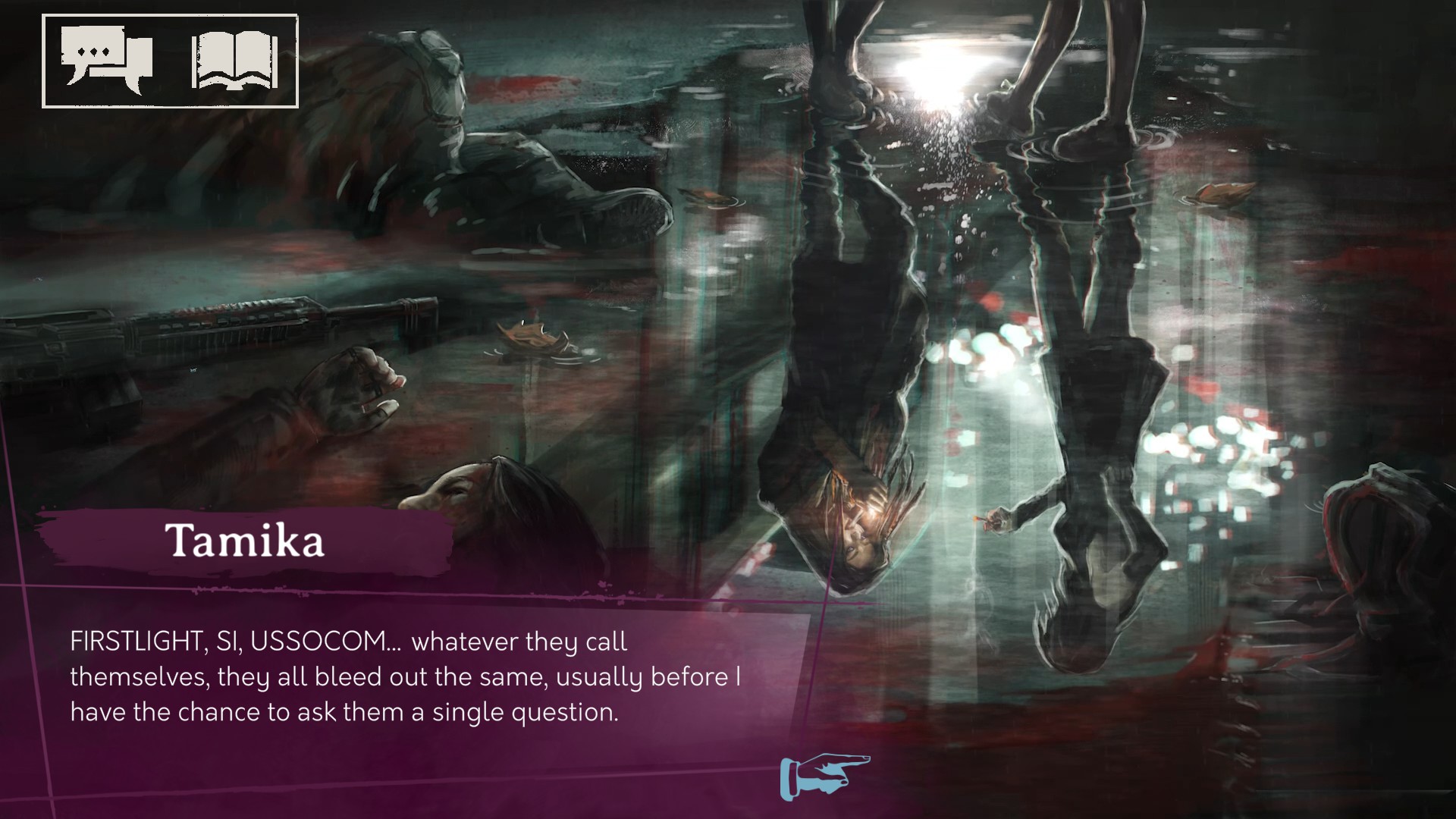 Hold up! Lambrosa are not supposed to be able to cast reflections, so WHAT IS THIS?

Violence: Because this is a visual novel, violence is primarily conveyed through text. The above screenshot is the most graphic image in the entire game. 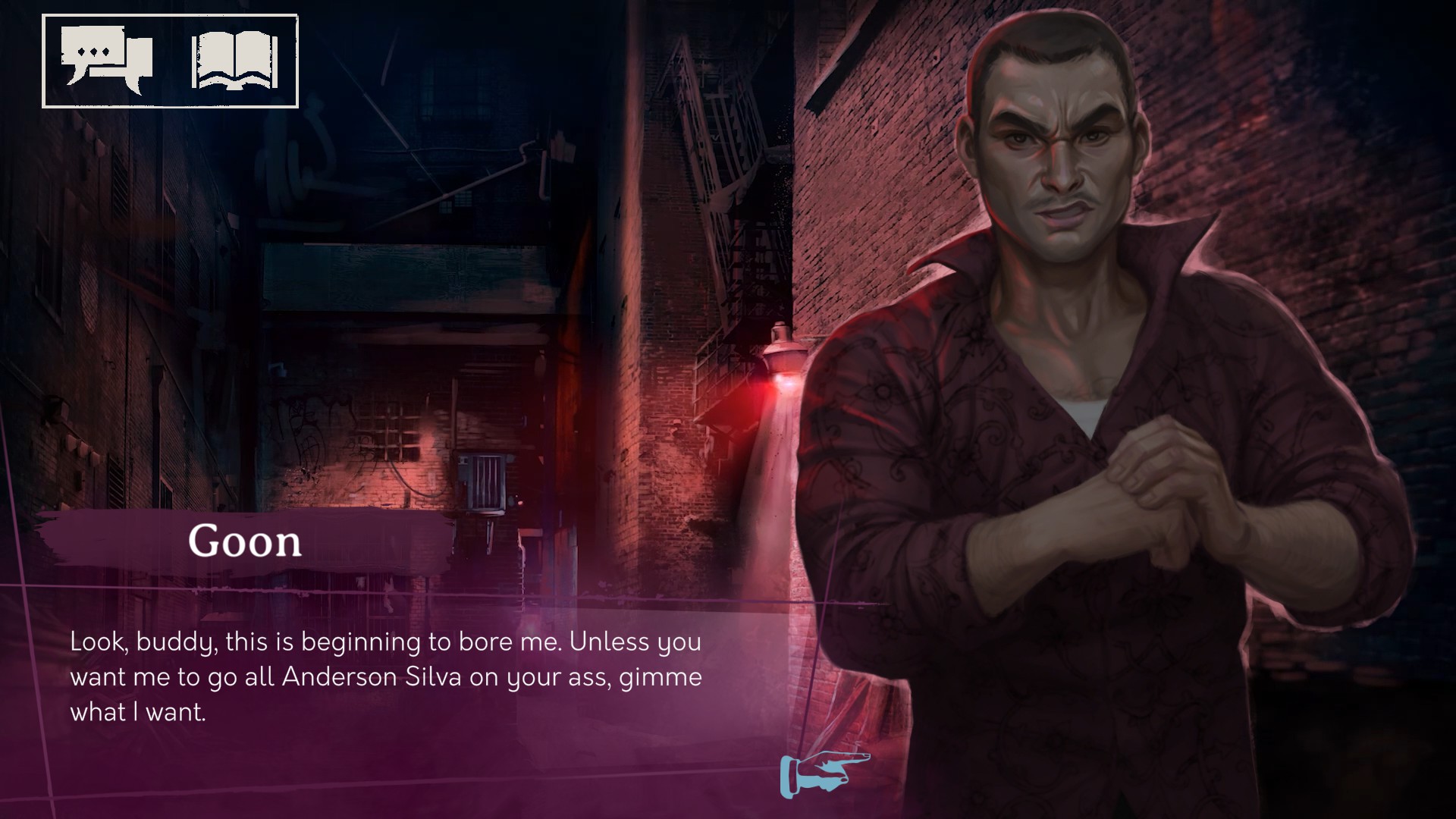 He is trying to be a gentleman about it but he is out of his league.

Language: The fact that I am unable to include in my review any images from the game that contain the best lines due to the intense language used should be indicative of its nature. The primary culprit for the hail of F-bombs is the main character. 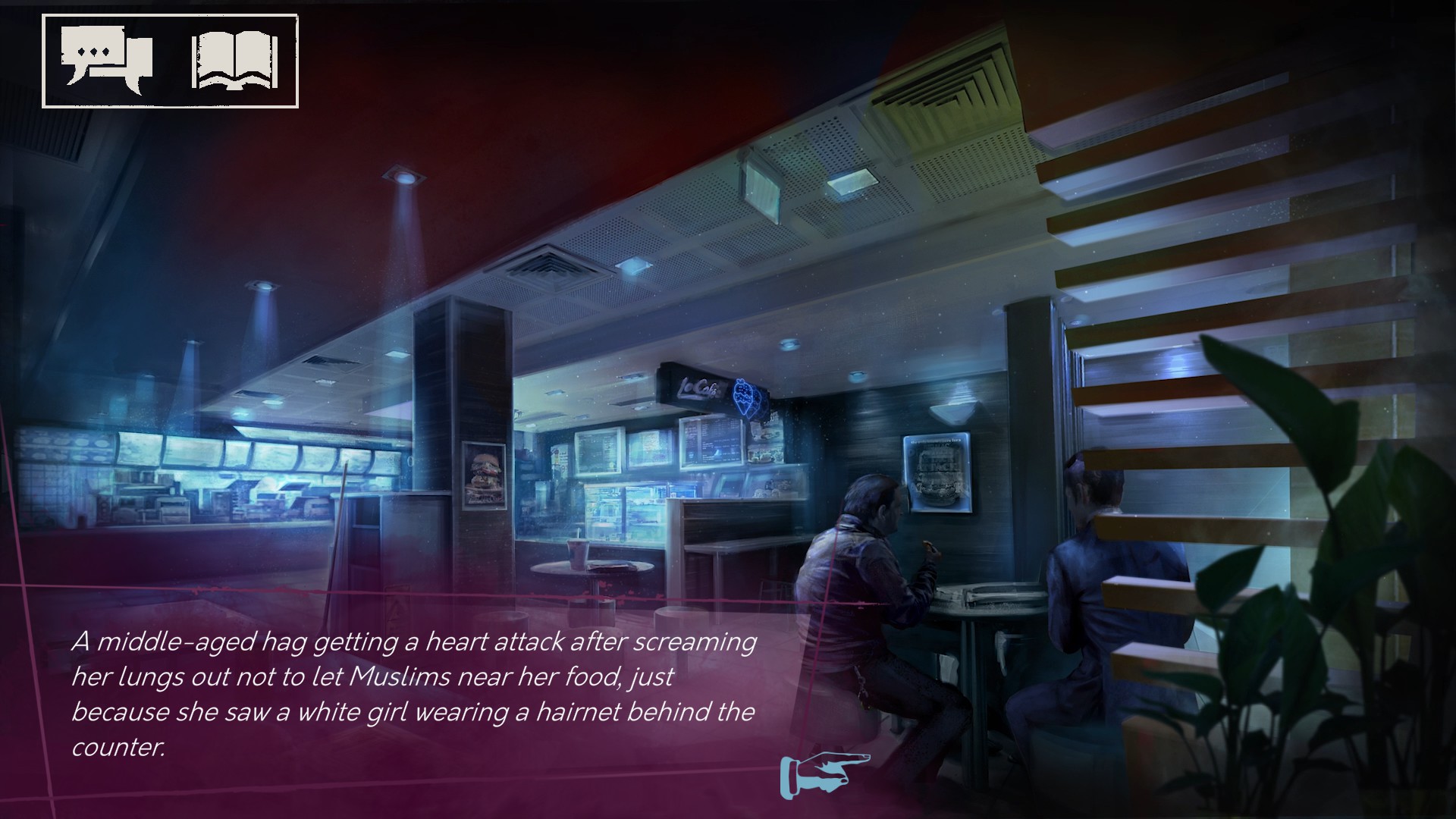 It would not be America without some Islamophobia. New York provides enough diversity for these clashes to take place.

Racism and Bigotry: In the Codex, Kindred refer to humans in a number of ways, from Kine to vessels. “Kine” is considered derogatory in the World of Darkness, because it is a term associated with livestock. Naturally, Kindred consider themselves superior to Kine, yet because of the Second Inquisition, Kindred must maintain the Masquerade to survive—a contradiction of so-called superiority. 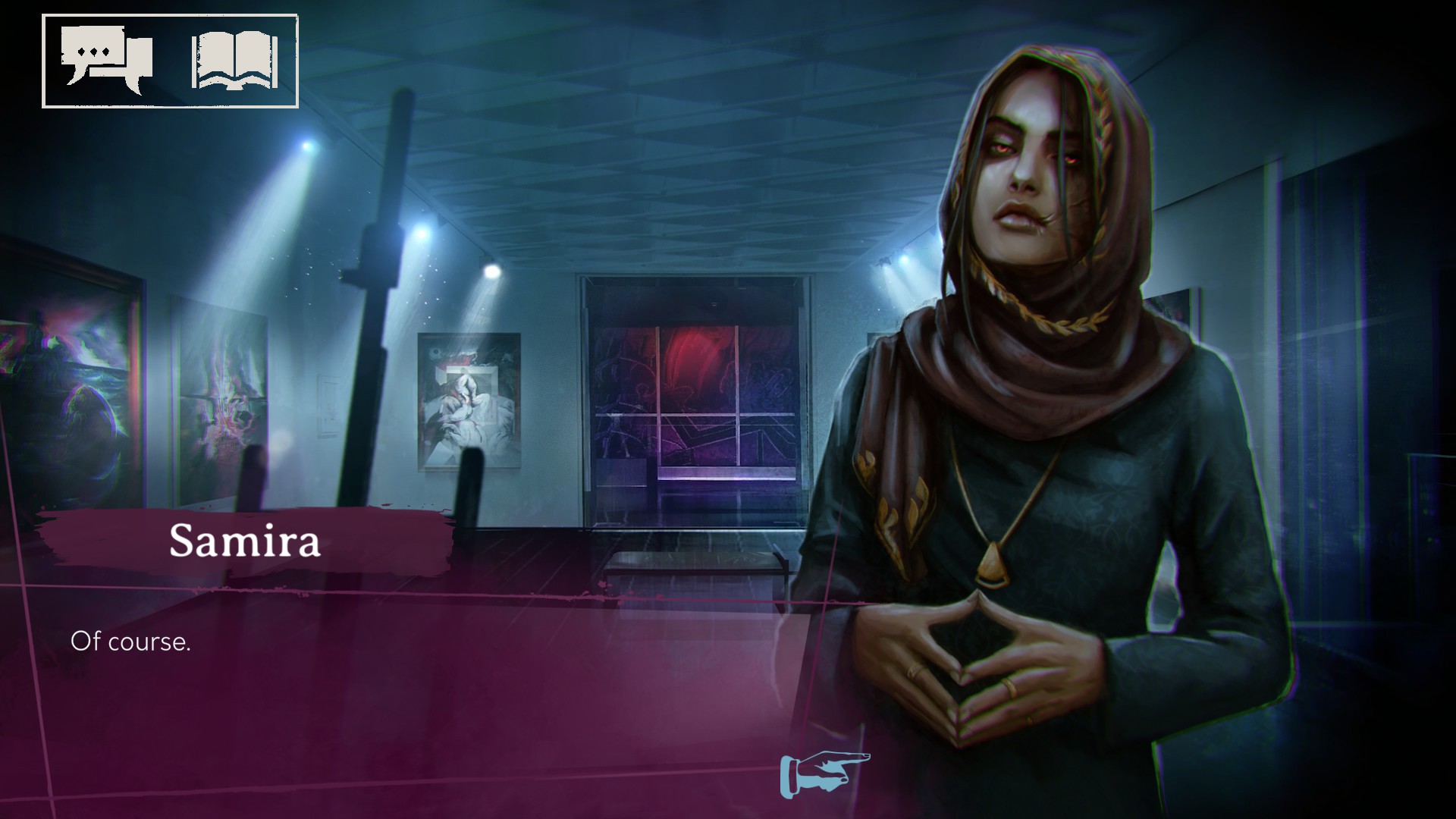 Shadows of New York introduces Samira, a member of the Banu Haqim clan, based in the Middle East. Indeed, the Masquerade has an international reach.

Positive Content: I am oftentimes annoyed with visual art and fiction set in New York City, but lacks its demographics. Neither Cotaries of New York nor Shadows of New York betray reality in this regard. 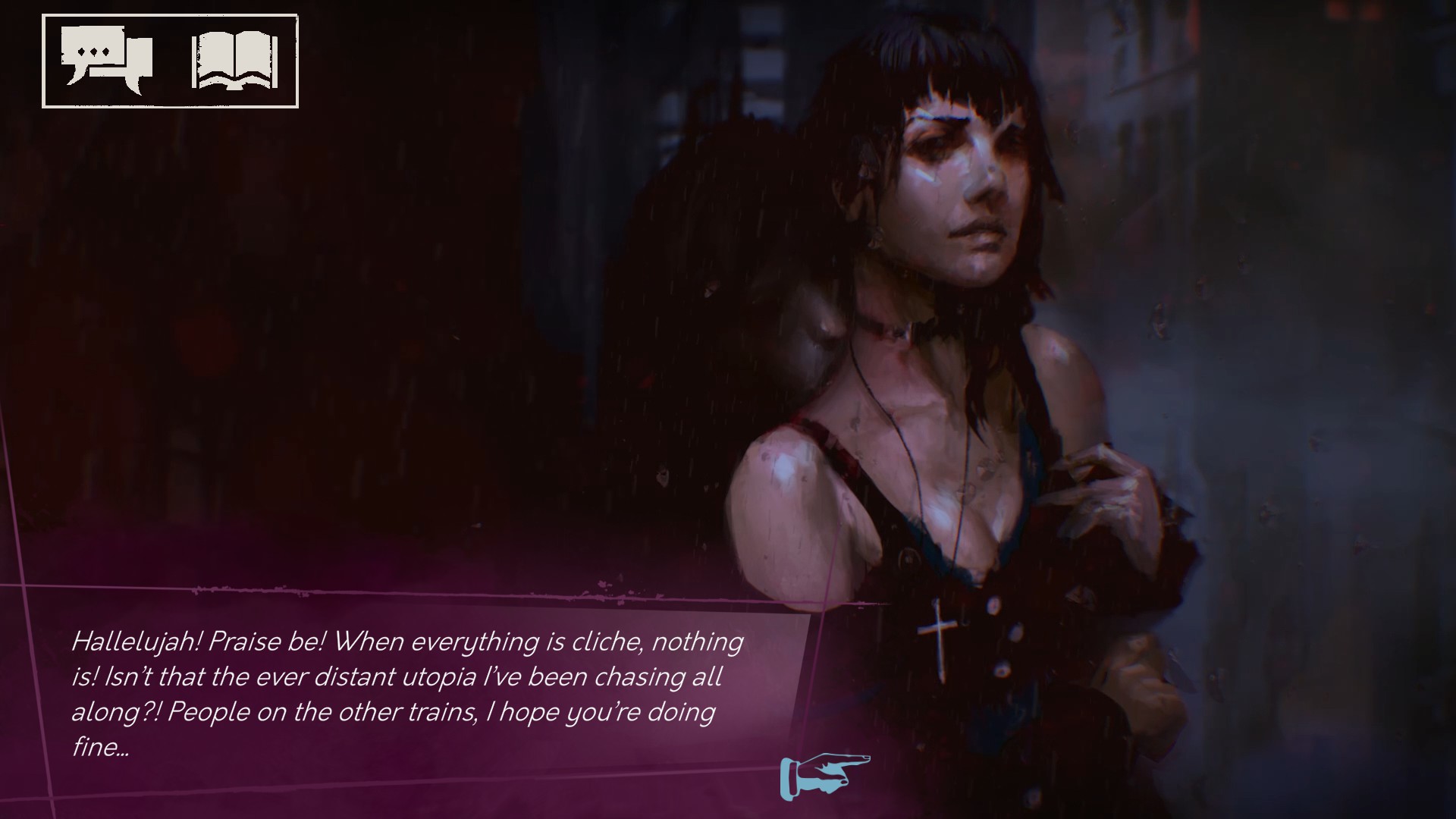 The kiss, let alone the embrace, triggers a euphoric effect.

Brilliant though cynical freelance investigative journalist Julia Sowinski reports to work at a publication called the Double Spiral and gets terminated. After dressing down her boss, she breaks the news to her girlfriend over the phone while riding the metro. She notices that she is riding alone too late! A shadowy figure pounces, and Julia regains consciousness with a gun in her hands while standing over a still-bleeding body. The shadowy figure taunts her, daring her to take the shot, and I choose to pull the trigger. I miss, but the shadowy figure is…pleased with my choice? 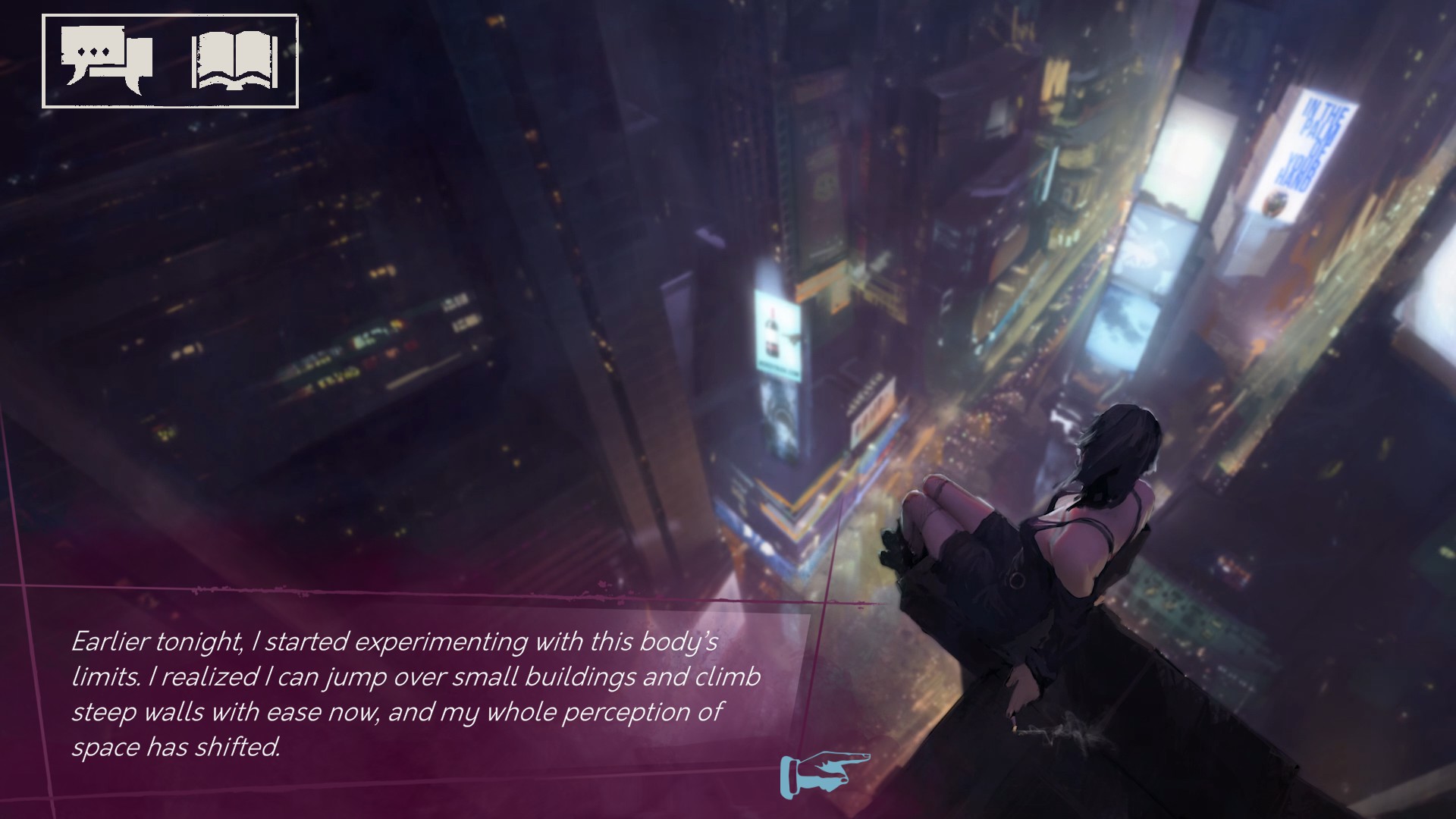 Super powers! But at a what cost?

My—Julia’s—reward is the embrace. In contrast to Cotaries of New York, Julia knows her sire, and therefore does not draw the ire of the Camarilla, spending her first year as a neonate learning the ropes of the Masquerade, including curses and protocols unique to her home clan, the Lambrosa; similar to Cotaries of New York, her sire does not linger, and returns to the Lambrosa home base in Chicago, leaving Julia to fend for herself. Things do not go well, for the Camarilla assigns her the menial task of functioning as customs for Kindred entering into the city. 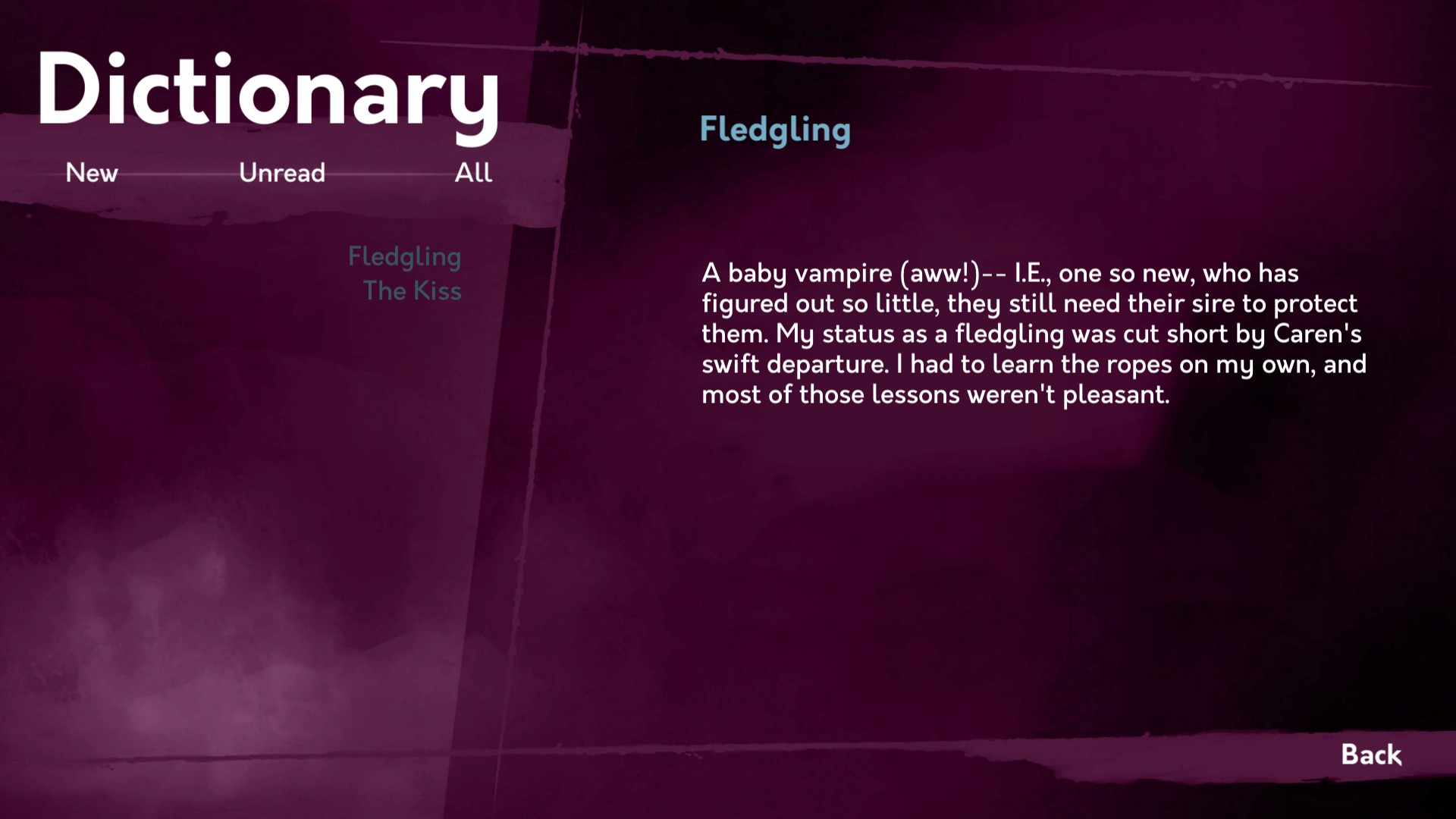 One of my favorite features in Shadows of New York, Julia defines Codex entries, and her personality shows. I am not sure if she is sarcastic here with the cute, girly gesture, but I laughed.

Her fortune changes when New York’s Keeper of Elysium arrives, coincidentally coinciding with the mysterious death of a certain Anarch Baron. Because she was once an investigative journalist, the Primogen council assigns Julia to…investigate the case. Because she is the Camarilla’s black swan, she is expected to fail. Her mission, then, is to prove the Primrogen wrong. 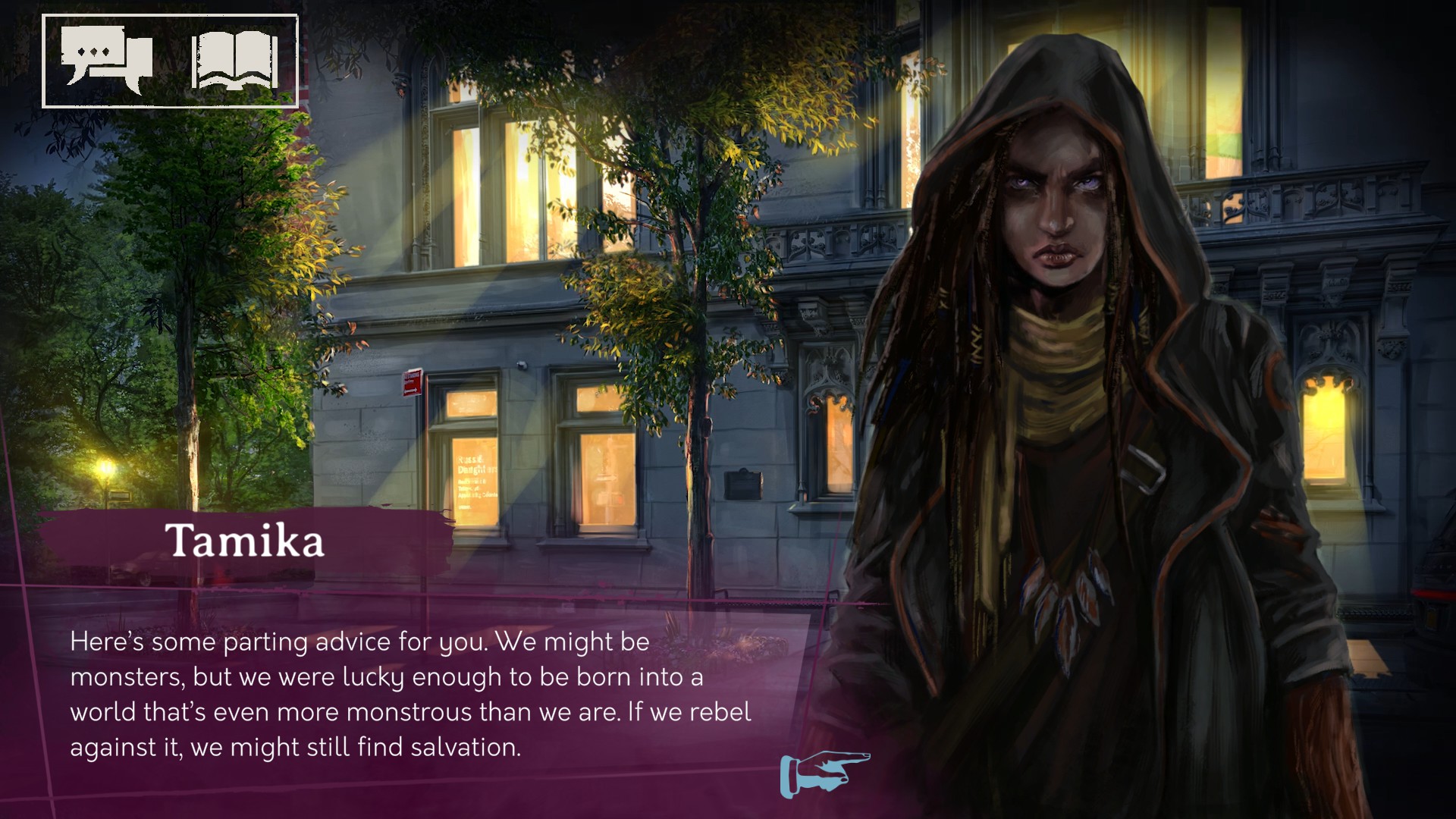 Tamika broke up with her boyfriend because he became a moderate when he was once a revolutionary like her. Who is her boyfriend? Play Shadows of New York and find out!

It was not until I finished this game and unlocked the bad ending that I realized that this game is a stand-alone expansion to Cotaries of New York. Shadows of New York follows a gameplay pattern similar to its predecessor—gameplay in a visual novel being choose-your-adventure options that are limited to two choices per night. However, the options in this game are inconsequential matters of taste; the genuine ending-altering choices take place during unavoidable story sequences sandwiched between Julia’s nocturnal exploits. 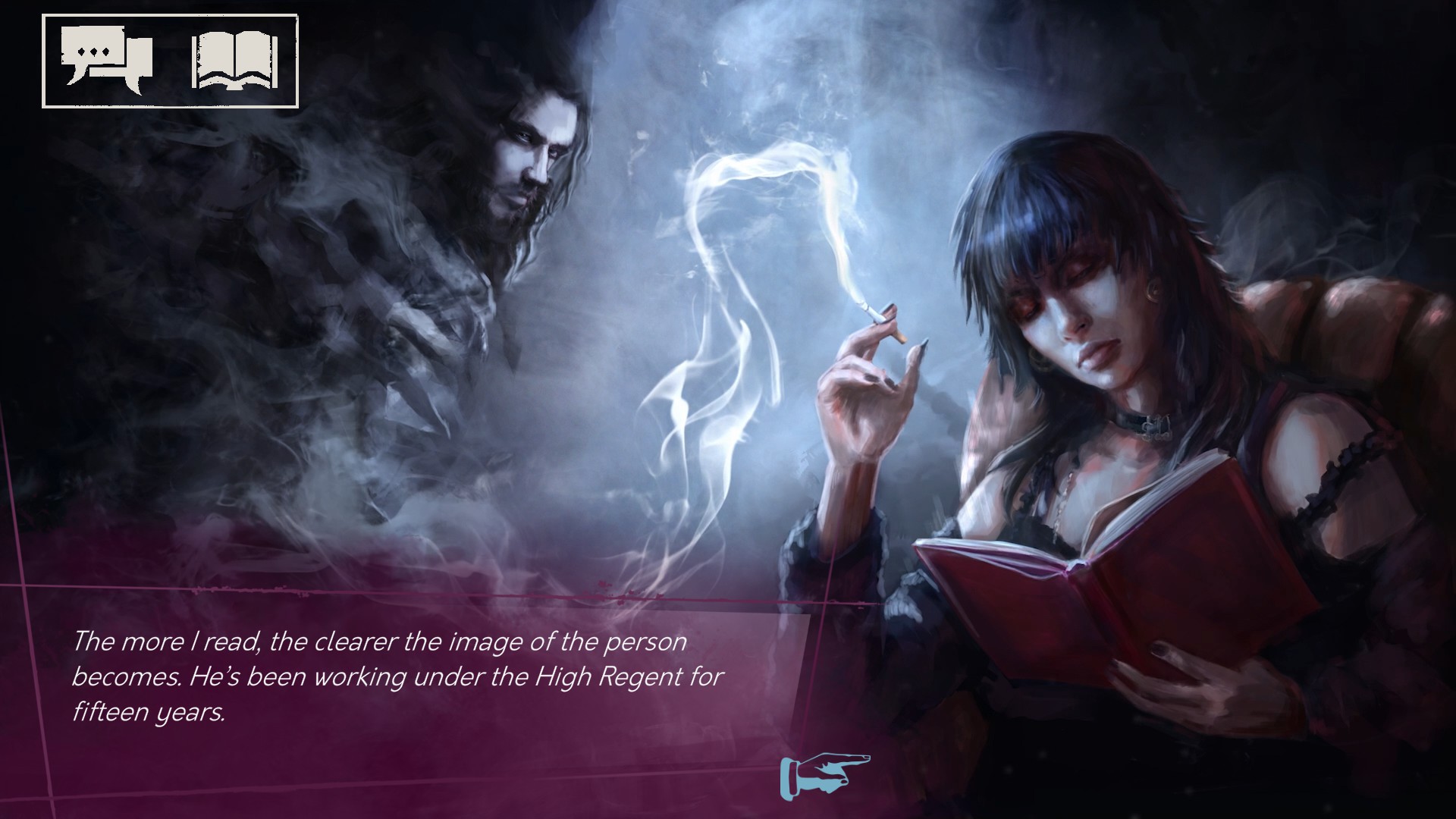 Agathon, bro. Are you okay?

In this regard, Shadows of New York is even more linear than its predecessor. I would have preferred that the new Kindred introduced here, Katherine Wiss and Samira, had been granted the “full campaign” treatment like the allies sought in the previous game. Instead, I had to settle for cameos. While it was nice to hang out with some of my favorite NPCs, the offerings here are smaller in scale. 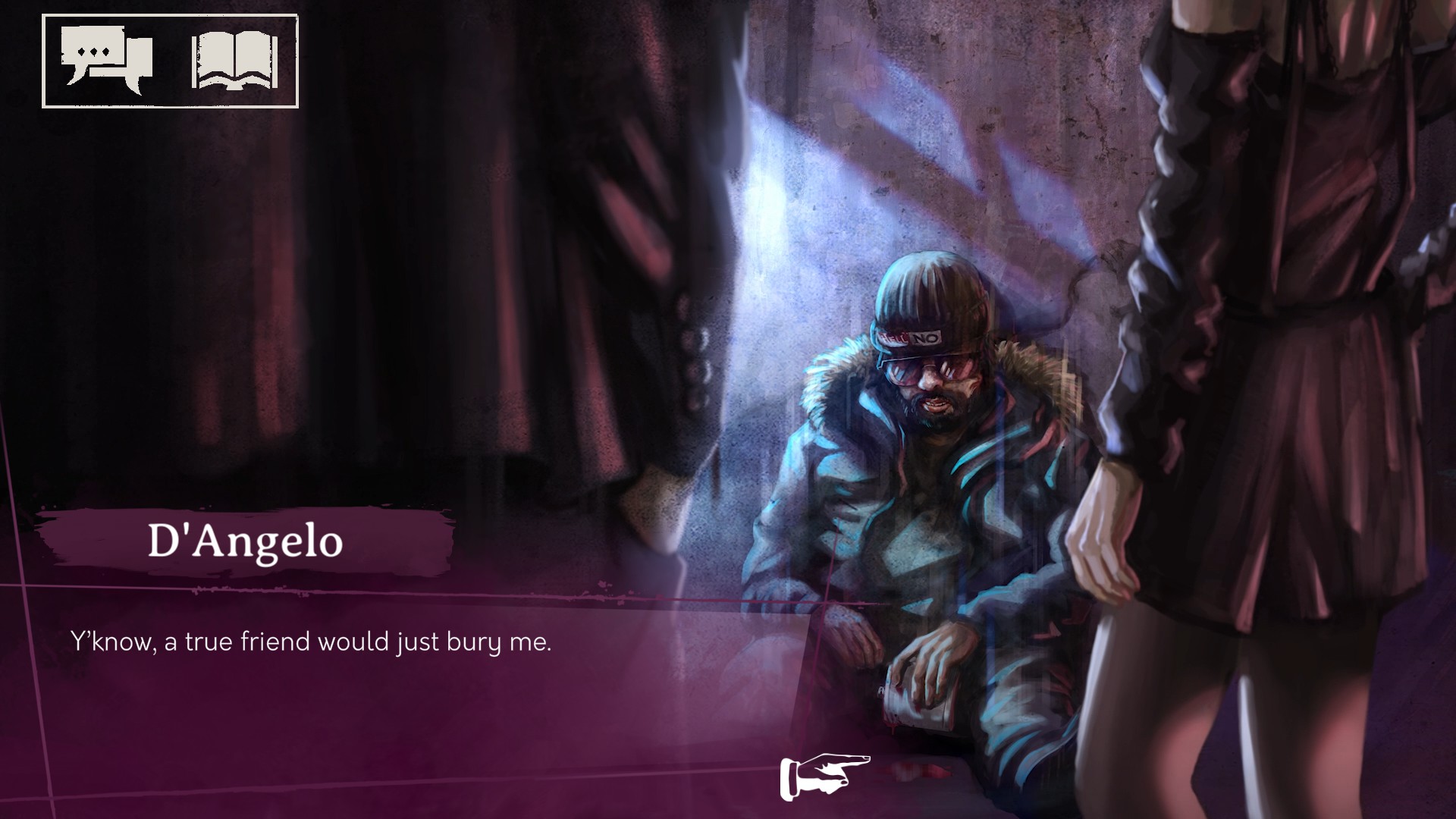 This man has seen better days.

In exchange for a haphazard adventure split between three clans, Shadows of New York offers a smart, straightforward experience. Regardless of the player’s choices, Julia is no puppet, and is a fully-realized character who thinks and behaves with what she believes to be her best interests in mind. Her social and intellectual acumen enables Shadows of New York to delve deeper into the complexities that the multifaceted politics that the World of Darkness has to offer, which are riveting. Fans of Vampire: The Masquerade will dig this game perhaps even more than I have, for I roleplayed Lambrosa incorrectly the first time; I would likewise recommend Shadows of New York to fans of visual novels in general, but only after they have played Cotaries of New York first, a game that I will be returning to given some of the events played out here. 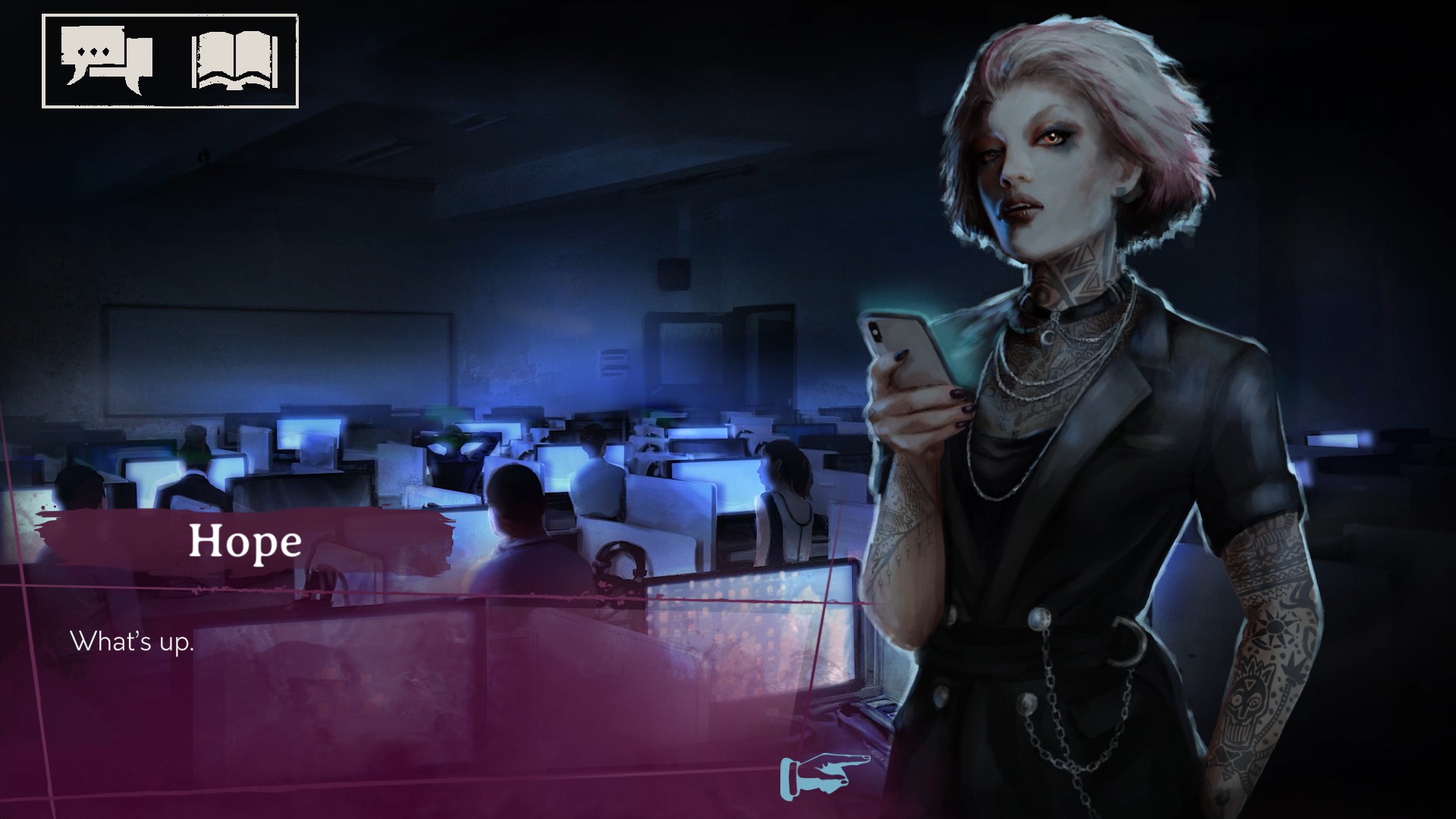 What up, girl? Hope got herself an executive glow up!

Vampire: The Masquerade – Shadows of New York lives up to Draw Distance's promise of being a stand-alone expansion that offers an in-depth look into the World of Darkness.