Review: This War of Mine (PC)

There isn’t really a “narrative” to TWoM.  A general setting is established with simple backstories provided for the surviving characters.  There are no story arcs.  There is no obvious end goal.  Just survive until tomorrow.

That is truly the whole of the narrative.  Sometimes the player will meet other characters with circumstances or situations that they must work around, and those characters will have little blurbs of story impact, but nothing substantial.

A disclaimer must be made, though.  I’ve never made it farther than 30 Days.  Perhaps things change with progress, but I doubt it.

Pacing is on the shoulders of the player and moves at their discretion.  However, there are limits.  Days pass as quickly as wanted or needed, but due to possible starvation, the game forces you forward at a minimum speed of being able to upkeep your hunger and health.  Most would consider it unwise to progress too slowly, as some visited locations may be scavenged by NPC’s in your time of leniency, thus removing any future benefit of those places.  Oh, and it progressively becomes colder outside, so if you haven’t developed enough technology to keep yourselves warm and safe at home-base, chances are all your characters will freeze to death.  In short, there is a minimum speed you must tread through the game, but there is no maximum speed.  Be warned though, too aggressive a play-style might lead to unnecessary losses. 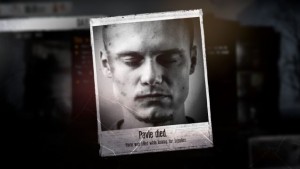 There is no character “development.”  The survivors are given a quick bio, but any changes in their mentality or behavior are more closely related to gameplay than standard, story-influenced change.  For example, a character might be depressed if one of their friends is murdered, or they’ll be “broken” if they are forced into a situation where they must kill somebody else, especially someone innocent.  This can lead to the character being incapacitated by sorrow, or even killing themselves out of grief if left without friendly council.

Inspired by the Siege of Sarajevo between 1992 and 1996, during the Bosnian Wars, This War of Mine is wrought with a second-hand, dismal account of one of the longest urban sieges in modern history.  Due to constant “shelling” from the military, most structures are either toppled or subject to eventual, inevitable ruin.  Snipers are a constant problem for scavengers, as they have their eye continuously trained on some of the more populated areas of the city, and must be avoided at all costs.

Because of the blanket of desperation over the city’s survivors, there are interplays of raiding between the player and the NPC’s, with most parties trying to fight for themselves.  Sometimes there are less malignant individuals that may also be interacted with.  An impatient and worrisome bartering fence, an infirm, elderly couple, a father who wants to reunite with his son, the residents of a hospital, and so on.  Sometimes these people will be interested in trade, or ask for favors.  But menacing predators are milling around as well.  Psychopaths and bandits can either be avoided or eliminated… at the risk of losing one of your own characters and all of their supplies.

The artistic expression adds a subtle layer of interest and flavor to the setting.  A mild “sketching” pattern swims in the background of most locations, creating this odd, but memorable design to the game’s art as a whole.

There is some language, but it’s surprisingly scarce considering the nature of the game.  Expect a couple “d***”s to be floating around, and one glaring “F*** the war!” banner outside your home base, but that’s about it. 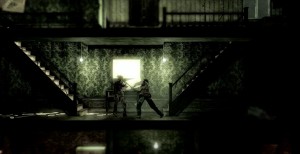 The game can be played with a pacifistic agenda, but doing so makes things far more difficult.  Many of the most worthwhile resource stocks are guarded and will require your characters to murder the guards.  This could involve shanking them in the back, shooting them upfront, or beating them with your fists.  Violence is generally not condoned by the survivors under the player’s care, and they will reflect on their actions through the daytime hours.

There is one brothel available to visit during your nighttime scavenging.  While the description of this place is crudely sexual (“If you want to get laid for a can of meat, this is the place. Mothers will do some pretty kinky stuff to get food for their children“) there are no activities taking place at night, and the player is actually given an opportunity to set free two of the prostitutes who have literally been locked up in the basement.

One of the early locations of access includes a church decimated by the war.  You can barter with the head pastor, but the refugees hiding in the basement would rather have nothing to do with you.  This is the only overt content affiliated with anything religious or spiritual, though the generally psychologically and spiritually challenging vibe of the game may have an impact on your emotional status. If sorrow or regret goes unattended, some characters might even commit suicide.  As described by a friend, “This game is basically a depressing version of The Sims.”

Alcohol can be distilled and consumed, and cigarettes of various quality can be manufactured.  Some characters (such as Bruno) will be in constant complaint if they go too long without a smoke.  These items are also useful as bartering tools.

“Positive” is a loose term, here.  This War of Mine is a game that shapes a new videogame experience.  It cuts out all the traditionally fun, candy-coated elements of war games and leaves you with something cold and visceral.  A tale of brutal, staggering survival against cruel humanity and the human condition.  It is positive in that it has an ambition and agenda that is refreshing and perhaps slightly convicting, but that’s as far as the word “positive” can be carried.  Though, there is something to be said for that moment when you help reunite a father with his son. 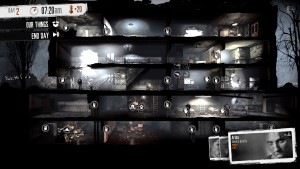 Gameplay is far and away the focus of This War of Mine.  Enduring the daily grind of war survival is rough, and it becomes progressively more difficult as you’re forced to take risks.  The ultimate goal is to simply make it to the declaration of a ceasefire, which occurs after an indeterminate length of time.  I did not know this last fact until I did research, as I was unable to ever make it to the end in any of my 4+ playthroughs.  I didn’t know there was an actual ending.  Given the nature of the game, it seemed appropriate that you would just last until everybody died.

During the night, you must fight, scavenge resources, and rob others in order to survive the next day.  The daytime hours are used to delegate tasks, such as shelter upgrades and survival activities among the survivors.  Every interaction in the game is point-and-click, with no keyboard functions available.  This might sound restrictive, but it’s actually kind of refreshing, and there’s really no need for key-inputs anyway.

Perhaps most interesting is how the world changes with each passing day.  The survivors under the player’s care are not the only active group in the city.  Sometimes venues for resource acquisition are disrupted by military activity, inclement weather, or other survivors who have already sucked the resources dry.  In choosing who will scavenge at night, a window informs the player of which locations have specific amounts of certain supplies, whether those be medicines, weapons, foods, or something else.  The amounts will change depending on how much you take (and whether NPC’s take anything for themselves).

The limited carrying capacity is realistic but frustrating.  No backpack upgrades are ever presented for the player, much to the dread of loot-happy people such as myself.  This forces the player to decide which resources take priority, which sometimes feels like pulling fingernails.

Upgrading your shelter and the utilities inside it are of paramount importance.  Advancements can benefit you with easier access to food (animal traps), available water (rain distiller), and protection (barricades); and the metalworking station can provide numerous useful tools, such as saws for cutting through metal, shovels to excavate rubble, and weapons to defend–or fight–with.

There is no multi-player function.

Graphically, This War of Mine is great, especially for an indie game.  That being said, it’s not a game that requires good graphics to appreciate, and you hardly even notice the quality of the graphics over recognition of the graphical style.  It’s a 2D, cutaway side-scroller of sorts, though don’t go thinking it plays like classic Sonic or anything of similar tact.  In addition to this, and as previously stated, the artistry of the environments and the use of sketching elements in the design makes for a unique graphical experience, like the background is part of somebody’s sketch book.

There are a few songs the player will become familiar with while playing.  In particular, the daytime and nighttime themes.  The former is a spirit-crushing track that seeps helplessness into your soul, while the latter is hardly a song at all.  The nighttime theme is meant to keep you nervous and impatient.  Aside from that, there’s a song that plays when all the survivors in your care die and you’re reviewing the history of the playthrough.  Expect to hear this song at least a couple times while you’re learning the ropes.

This War of Mine is a fantastic jolt of dark, indie magic.  The mission of the development studio and the heart they put behind this game are evident in its every feature. Playing it is something I’d recommend to any person, gamer or otherwise.

God bless, pray for our soldiers, and always remember to smile.

“I will bless the Lord at all times; His praise shall continually be in my mouth.  My soul shall make its boast in the Lord; the humble shall hear of it and be glad.  Oh, magnify the Lord with me, and let us exalt His name together.”

Song of the Day – “I Still Miss You” by Hawk Nelson

This War of Mine is a fantastic jolt of dark, indie magic. The mission of the development studio and the heart they put behind this game are evident in its every feature. Playing it is something I'd recommend to any person, gamer or otherwise.