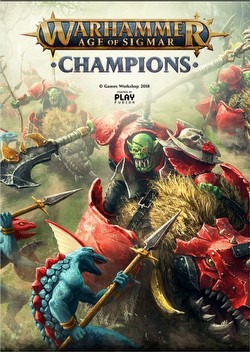 Let me start off with a disclaimer: while I have written previews for both Gwent (which we now have a review for) and Elder Scrolls: Legends when they were in their beta phases, I consider myself a casual card game player. Since I don’t have anyone to join physical tabletop board games or card games, digital is the route I must go. Nevertheless, I enjoy exploring the mechanics that each one has to offer—and Warhammer Age of Sigmar: Champions might be my favorite so far.

AoS: Champions has some deep history behind it. Age of Sigmar is the successor to the original Warhammer: Battle Fantasy tabletop miniatures game that started all the way back in 1983. With so much rich history and being that Age of Sigmar: Champions is adapted from a real card game, it seems as though there is a lot that it needs to live up to.

Spiritual Content: The gameplay of AoS: Champions is centered around building decks that are based on four factions. The factions of Order and Destruction are the typical human and orc alliances you’d find in any fantasy franchise; the other two are Death and Chaos. The faction of Death consists of cards that are based on the supernatural, like zombies, skeletons, and vampires, for example. The faction of Chaos is an army that consists of demons that originate from a realm that resembles Hell. Players have to option of choosing which faction they prefer. There are champions that represent each faction, and players are encouraged to utilize the wizards in their deck to activate spells.

Violence: There isn’t any action that takes place onscreen except for special effects that represent attacks. The attacks are projectiles that are shot at an opponent’s pool of health from the attacking card. These projectiles can be in the form of spells, explosions, and even a blood-like projectile that will splatter. 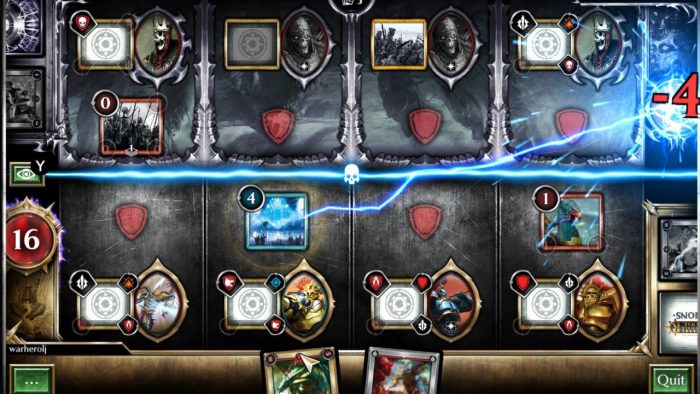 Age of Sigmar: Champions may be my personal favorite when it comes to digital card games. Though the mechanics can get deep like any other in its genre, the gameplay is intuitive enough for any player to pick up and feel competent. It mostly comes down to unit placement, abilities, and spellcasting instead of having players worry about attacking so much. Let me get into some detail on how it all works.

In AoS: Champions, each player chooses four Champions to play on the field, and come from the classes of Warriors or Wizards. Unit cards can be deployed on warriors while spells are activated through the wizards, and ability cards can work on both. The main focus is to attack your opponent’s HP, but units can still be removed from the field if you have a card that can do it. 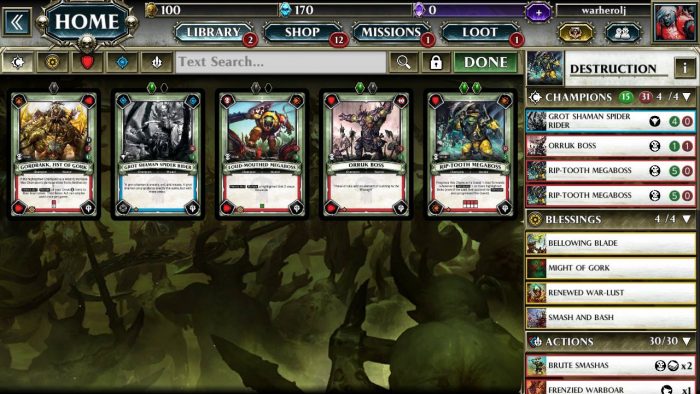 This card game is built on a unique rotation system that determines how long a card can stay in play, attack, and bring certain effects into play. This system is where the true strategy of the game is found, containing depth and nuance that the player must learn and master, lest it master them instead. Cards don’t have hitpoints but will be discarded when they can no longer be rotated. A good placement strategy is all about considering what a card can do and what their rotation process is like.

That element of rotation comes into play with Champions as well, in the form of Quests. Each Champion has a Blessing card that can be activated by having them complete four different objectives. The objectives will range from doing damage, activating a spell/ability, or removing a unit. The activated Blessing card can put the player at a huge advantage during the late game and you’ll want to put some focus on activating at least one of them. 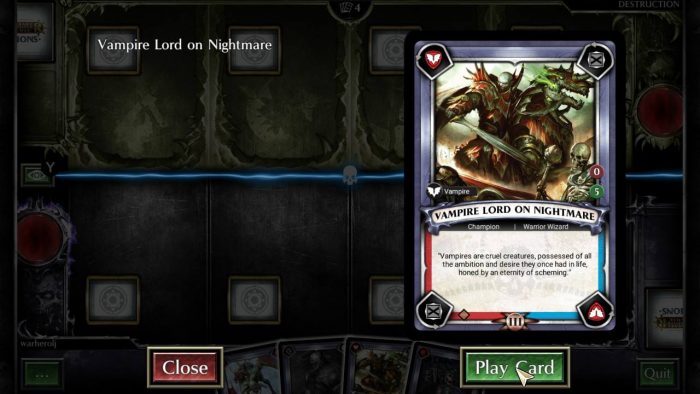 What I enjoy most about the focus on Champions is that they give me a clear emphasis on what to build my deck around. My main issue with most card games is that I never know what strategies I need to be building around. With the Champions as a guideline, I am no longer aimlessly shifting my cards around. A great example is making sure I have vampire type units for my vampire champion since two objectives for his quest are to place units of the same type. After I edited a few of my decks with a strategy in mind, I felt more confident before going into a match.

However, if you’re still not quite ready to face real players, there is a breadth of options for you to take on A.I. opponents. There are standard solo battles along with numerous single-player campaigns to test your skill. Realm Trials is the standard campaign where you will earn starter decks for each faction and unlock new cards. Timed event campaigns are also available along with reward campaigns that you can unlock by completing game-wide challenges. It is very possible to spend hours with this game and never take on an actual player opponent if you don’t want to. As for PvP, you have the typical casual and ranked matches, but there is also a draft mode called Arena of Echoes that costs currency to unlock. 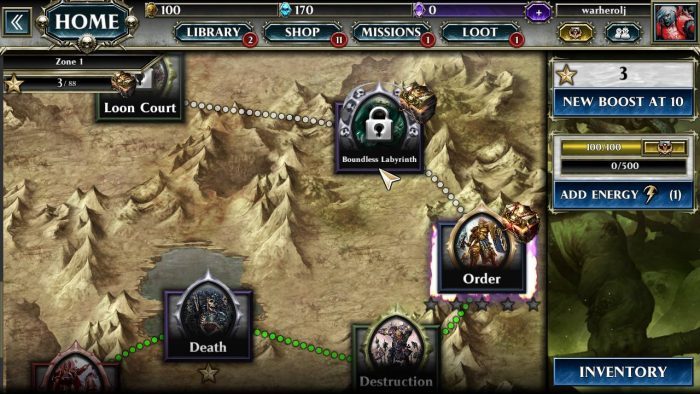 There are plenty of ways you can sink your time into AoS: Champions, but you’re going to see ads for microtransactions and booster packs everywhere. It can be tough to navigate through the cluttered menus because of that. The hook of card games is all about buying booster packs, but I have not felt the need too yet since I was continuously earning free packs; that may change as I progress. I did earn enough currency to buy a few booster packs but the way that cards are handed out feels more generous than others in the genre, and I hope they stick with it to keep players around.

While we’re still somewhat on the topic of navigation I want to give my thoughts on the controls. The devs have made use of the Switch’s touch screen since Champions is also available on mobile. The left stick can be used as well, but puts a cursor over your selection; this is likely some kind of workaround so that the player doesn’t have to move a cursor around the screen. Personally, I use both methods. I use the stick to sift through the cards in my hand, and the touch screen to hit the draw button when I’m ready to proceed. It took me a while to get comfortable with the awkward controls, but playing a few rounds becomes an enjoyable experience once you decide with method works best. 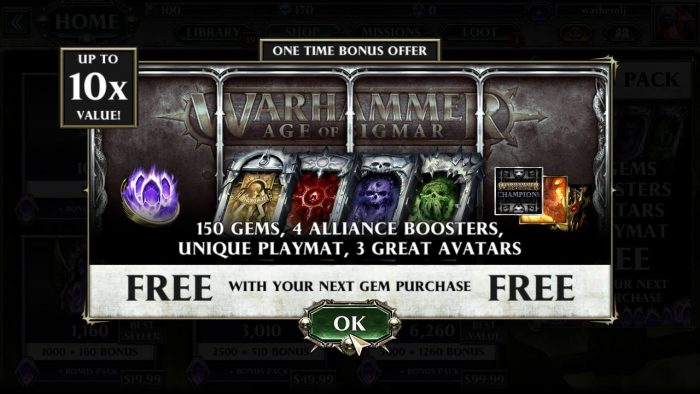 Lastly, one feature I have not had the opportunity to test out is card scanning. Through the use of the companion app, players can scan the cards they buy in real life and use them in digital format. This concept takes me back to the days of doing the very same in Yu-Gi-Oh on my Gameboy Color. Not only could this add some personal value to your purchases, but it might be very useful to players who enjoy playing both the physical and digital versions of the game.

Warhammer Age of Sigmar: Champions has a few issues due to the Switch being a strange place for mobile ports, but I have thoroughly enjoyed it regardless. Focusing on the placement and abilities of my cards is much less stressful than having to break through a line of enemies just to hit my opponent. The level of accessibility for players of any skill level is unmatched compared to other digital cards games I have played. For the very first time, I can also wrap my head around deckbuilding. If you consider yourself a filthy casual like myself, this may be a good place to start.

Porting a card game to the Switch may be a tough task, but Age of Sigmar Champions is still a great card game for players of any skill level as it stands with currently little competition on the eShop.