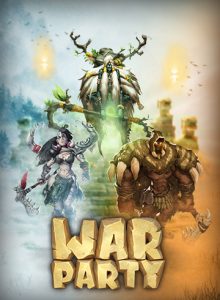 Though I do enjoy the occasional AAA experience, I have a fondness for indie games, and I enjoy seeing the developers of those games succeed. It was my pleasure to review the outstanding Guns, Gore, and Cannoli almost three years ago, and I was glad that I had the opportunity to play the sequel as well. It was not until I decided to sit down and write this review for Warparty did I re-remember developer Crazy Monkey Studios’ prior work. It is not every day that a developer dramatically shifts genres—in this case from shooter to RTS. Though I experienced some bumps in the road, Warparty is an impressive effort.

Violence: As this is an RTS, there will be fighting. As units take damage and/or die, sprays of blood will fly, sometimes staining the ground. This is not unlike the blood splats animations in WarCraft III.

Sexuality: Warparty conforms to the thematic cliché of cavemen wearing animal hides as armor and little else. None of this is sexual, however.

Spirituality: Two-thirds of the factions in Warparty devote themselves to fanatical-like worship of ancients called the Go’n. A key story element with every faction revolves around the power and acquisition of Go’n artifacts. Some units such as sprites and elementals are enchanted by natural and supernatural powers alike; others consist of shamen and witch doctors who actively heal and use passive skills rather than cast spells. 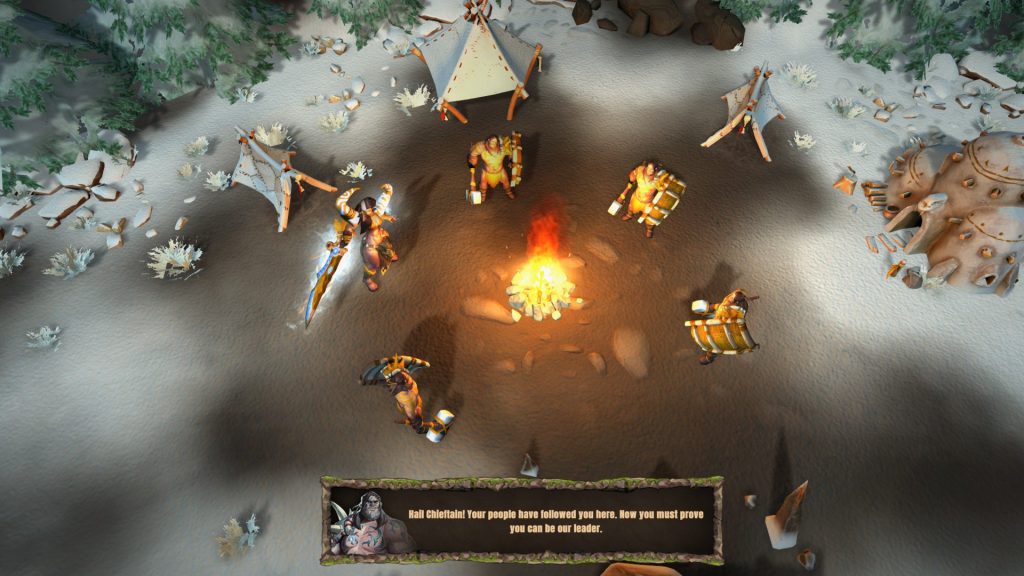 The Wildlander campaign reminds me of the Orc campaign in WCIII:TFT. “[Mika is] the war chief!”

During the Stone Age, many years before the events of Warparty, a tribe known as the G’on discover certain artifacts which possess a certain inexplicable power. They notice that dinosaurs are attracted to this power, and lend themselves to domestication. However, The G’on bicker over the best usage of this power, and war breaks out to the point of their own destruction, leaving behind these artifacts as the dinosaurs revert back to their natural state—a veritable Aeon of Strife. In the present, three individuals independently discover these artifacts while on their own quests: Mika finds the gauntlet and seeks to lead her Wildlanders to lands of plenty; the Sage of the Vithara believes that the world would be in harmony if humans were dead; Char of the Necromas finds the warhammer and wishes to end all life. Naturally, they clash into a Warparty. 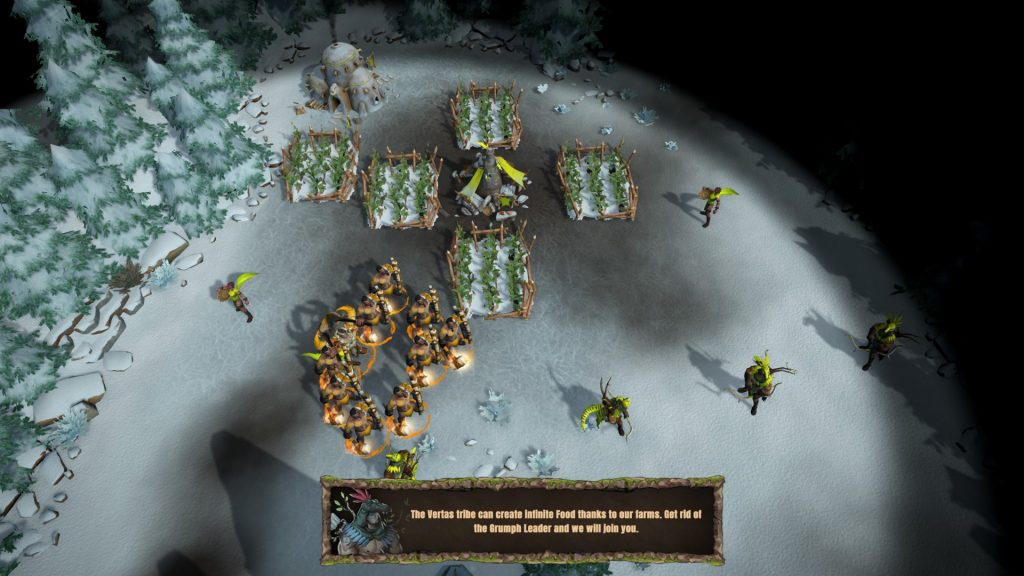 Those who have been playing Warparty on Early Access will be playing the campaign for the first time. The first Wildlander missions serve as the game’s tutorial for harvesting basics such as food and crystals.

Warparty has been in Early Access since October 2018, and during that time, only multiplayer, skirmish, and survival modes have been available; the campaign will be new to fresh and seasoned players alike. Its story, though, seems very copy & paste; no matter which faction a player might choose, they all result in faction leaders eventually crossing swords in proximity to some G’on power source. Unlike within WarCraft or StarCraft from which Warparty appears to be inspired by, the interactions between the races here are inorganic.

It appears that prioritization of getting the campaign ready for the official launch might have draind resources from troubleshooting. At the time of this writing, I have managed to reach the sixth and final mission for the Necromas faction, and there is a bug in the pre-release version that causes me to automatically lose no matter what. The developers on the Warparty discord have assured me that this is a known bug that will be patched out at launch. Though this is reassuring to know, I still suffered through the confusion and frustration of not being able to finish a campaign, discuraging my motivation to play the others for fear of encountering another game-breaking script. 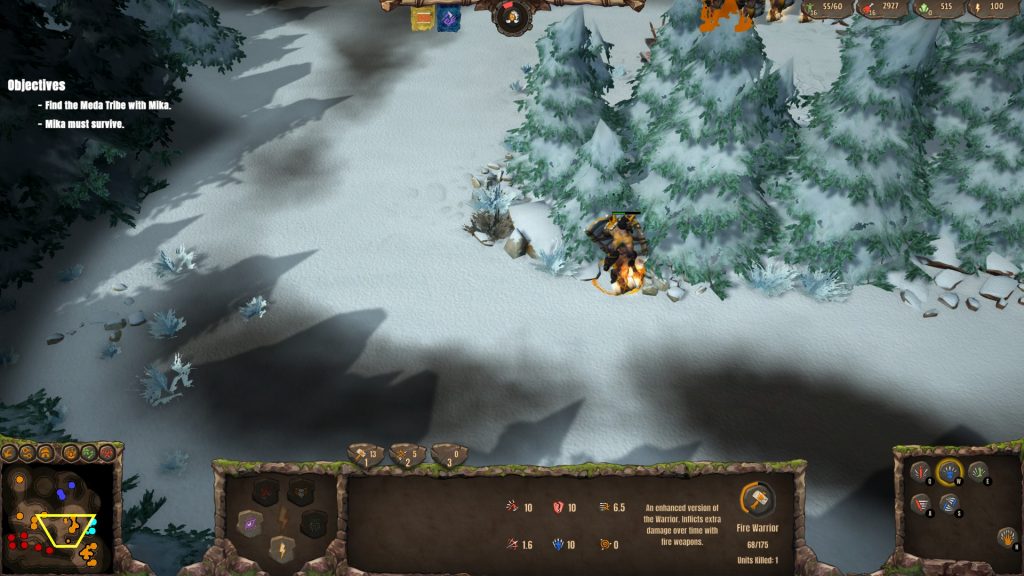 Warparty will test one’s tolerance for jank. Here, this unit is stuck in the tree geometry. Because I cannot force-attack like I usually do in RTS games to regain that precious population cap, I just had to “deal” with this army shortage. This is one example

Compounding the situation is that the developers choose not to allow the ability to save games mid-mission. In other words, in the event that one of my three children (or wife or dog) need my attention, I can pause, but I had better not quit or I would lose mid-mission progress. Lack of saves is an intentional feature that no one asked for. Going back to the days of the first C&C, I cannot think of an RTS that lacked a save-anytime feature. Even modern RTS such as They Are Billions still auto-saves to keep folks honest about save scumming. I just do not like having to treat my single-player experience like I am locked into a multiplayer session. 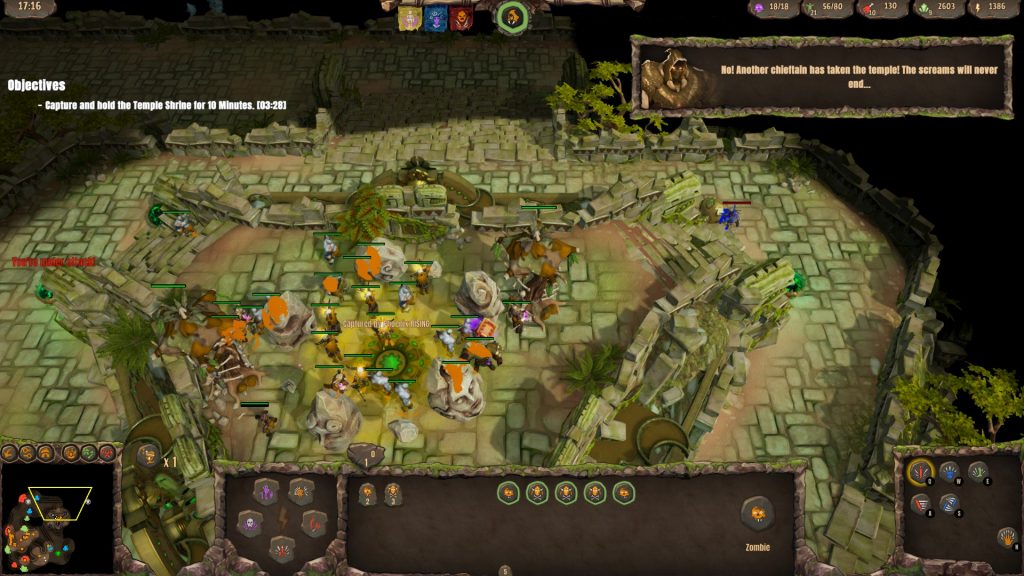 I am standing on the objective, but the game says I am not. L.

The quality-of-life problems in Warparty do not end there. Unit responsiveness is at times as dead as the Necromas zombies, who have a tendency to de-select even when using the click-drag box method. The Vithara’s Dilophosaurus is a ranged unit, but it sometimes does not actually shoot, even when near targets; I have to click them and manually target enemies instead of A-move. Even low-APM RTS players do not like wasting extra clicks. 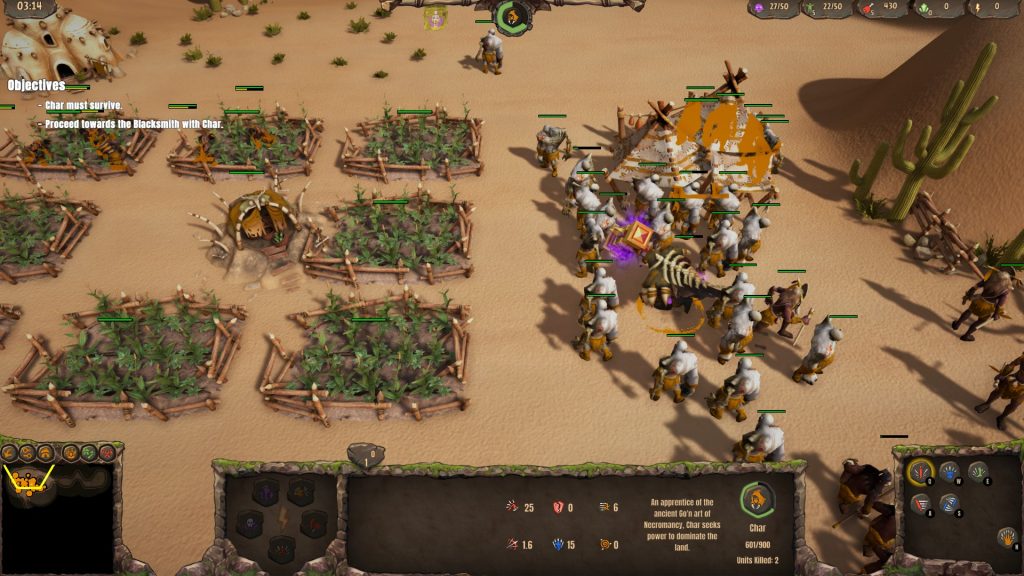 Notice how the objective says proceed to the blacksmith? It is not on the map! 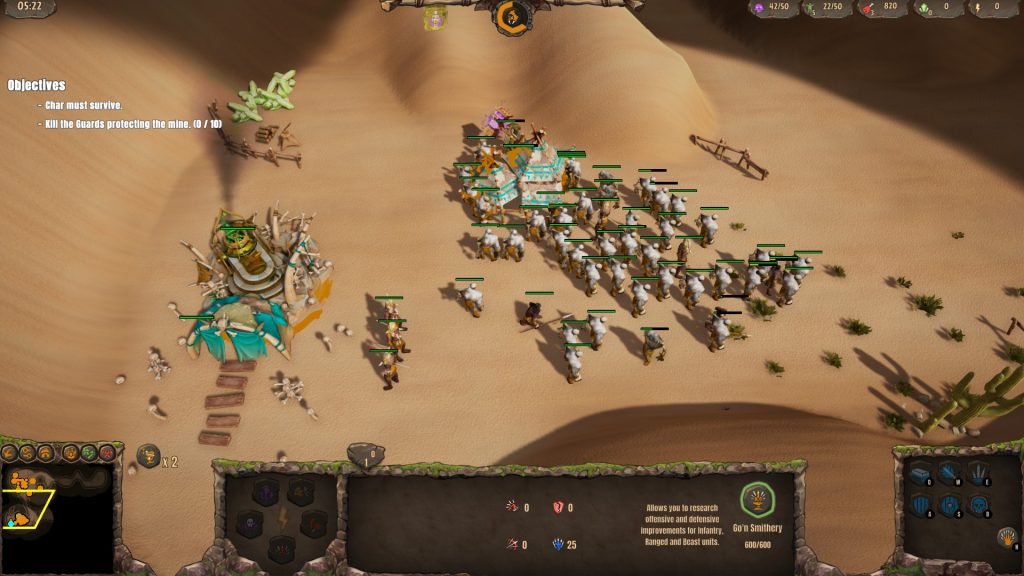 The blacksmith is located to the southwest, off-screen. It would make more sense for the objective to say instead, “find a G’on smithery,” which is what the structure is actually called. This may sound petty, but Warparty is full of unclear instructions like these.

Certain objectives that instruct me to go to X objective might require a Y method, but because the game does not provide clear instruction, I am left to figure things out by process of elimination. For example, in the second map of the Vithara campaign, at a certain point I was told to use a mammoth unit to clear a barricade blocking their way to an enemy base, but the game does not specify which barricade. Because of this, a barricade of turrets shredded my army, when I was supposed to go to a barricade that was part of the geography of the map and was scripted to disappear when I brought a mammoth. Unfortunately, this mistake would force me to restart an hour-long map from the beginning, because again, Warparty does not allow saves. Thus, any critical mistake, whether triggered by a bug, poor instructions, or bad gameplay on the player’s part, will result in a replay of that hour. Not cool. 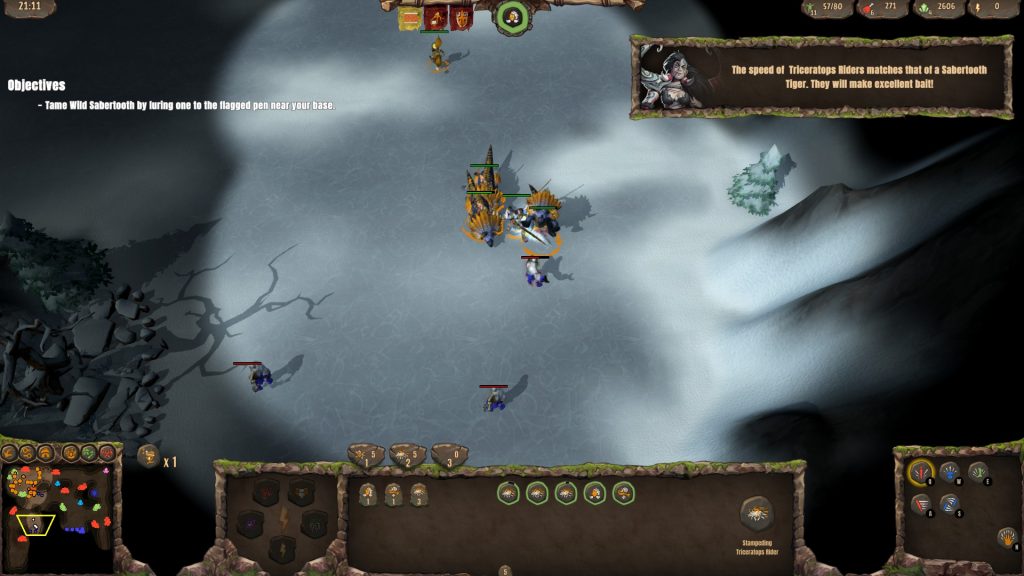 This is the explanation as to why sabre-tooths are not in the game.

Now I have dedicated a lot of text to note that Warparty could use some more polish, but there is some good stuff here, too. The three factions are varied enough in their themes to present themselves as distinguished. The Wildlanders are the standard “human” faction, though beyond regular warriors and archers, their mid-tier units consist of domesticated dinosaurs, such as panther or triceratops riders (I guess saber-tooth tigers did not make the cut). But even if those sound uninteresting, the top-tier unit is a friggin war T-Rex! 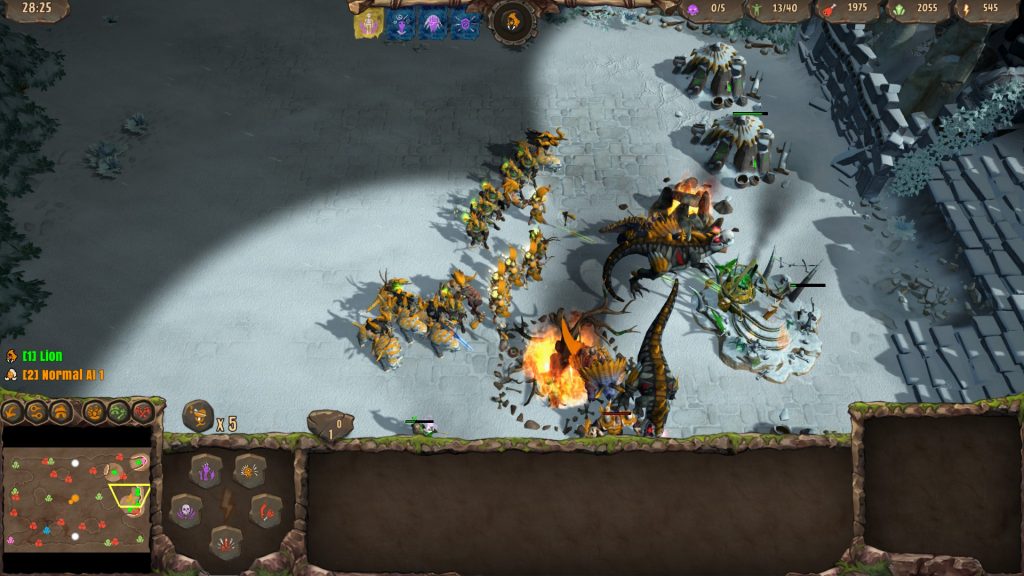 When the war T-Rex hits the map, all other arguments are irrelevant.

The Vithara are my favorite race, clearly inspired by my WCIII favorites, the Night Elves, right down to wisps being used to gather resources and build structures. Their claim to fame is that this faction is made entirely of non-human units: raptors, dilophosauruses, ankylosauruses, panthers (???), windigoes, mammoths, and dryads, oh my! 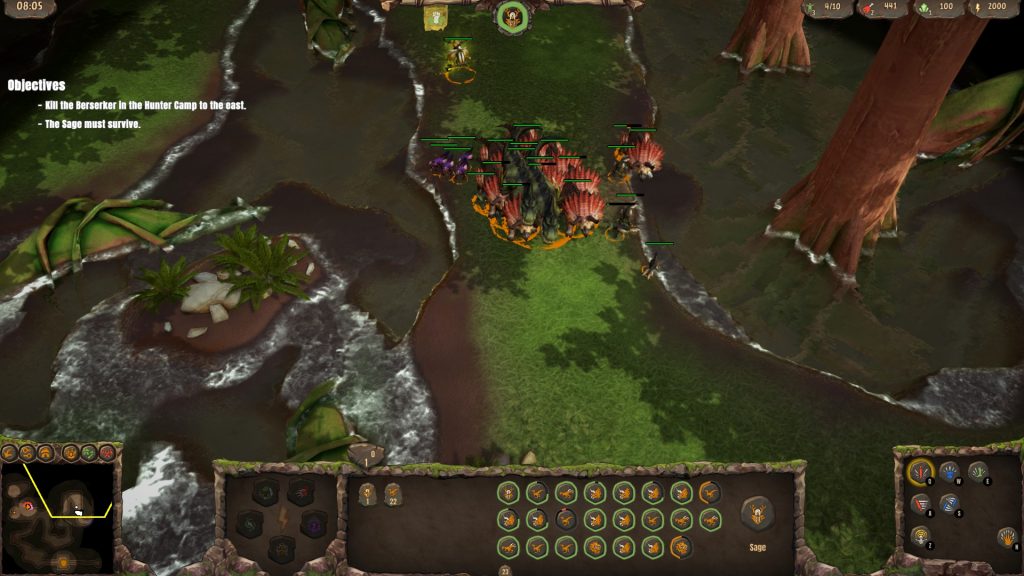 When commanding an army of raptors, triceratopses, and T-Rexes, one forgets about all of Warparty’s shortcomings and the game is just plain fun.

I typically gravitate toward necromantic themes in my fantasy games thanks to Heroes of Might and Magic, but even though the third faction is called the Necromas, only the tier-0 unit consists of zombies. the other units are either acolytes of death, such as the bone adept, blow gunner, shamans, and witch doctors who are human, or they are elementals or golems. With the third resource after food and gems—G’on power—it is possible to raise an army of zombies that exceeds the population limit, giving the Necromas a very HoMM feel where a stack of 1000 basic units still hits as hard as top-tier stuff. Because of this, I find the Necromas the easiest faction to play. 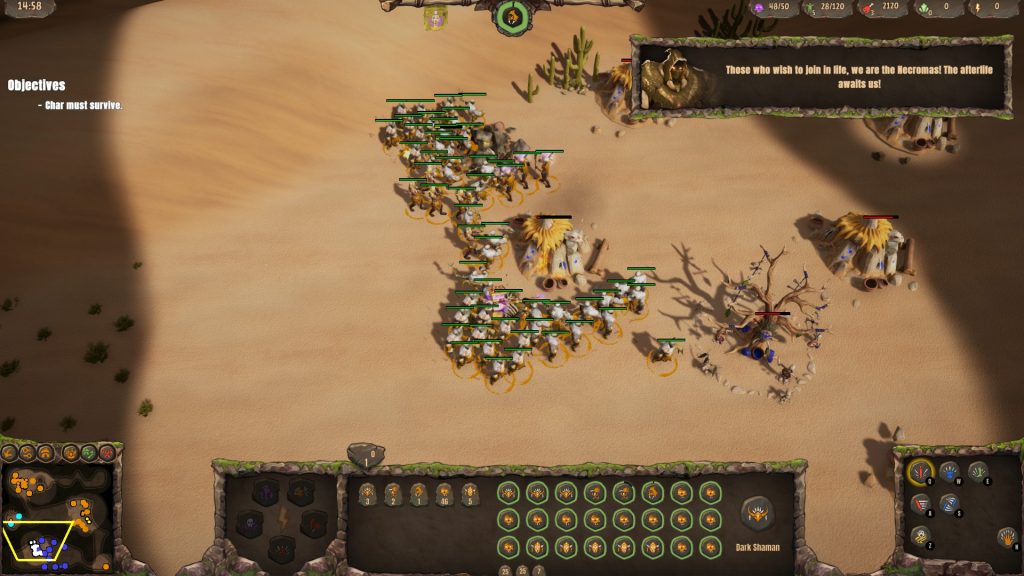 My favorite part about Warparty is its difficulty, which I noticed by the second mission of the first campaign with the Wildlanders. Here I am, building a sparse squad of soldiers while achieving objectives, but the game has assumed that I was raising an army in the meantime. After triggering the final objective, the AI facerolled me. Even when I brought a decent army the second time, I engaged into a battle of attrition. Remember the Vithara mission requiring the mammoth to clear a barricade? On my second attempt at this mission, I managed to “base race” while destroying the enemy’s first, only to learn that the AI had constructed a whole new base on the other side of the tower barricade. Wow, that is an old Age of Empires 2 free-for-all strategy of mine, when two opponents (who are being soft on each other) join forces to eliminate me since I am 1-2 eras ahead, and I take an emergency boat of my last peasants to quietly rebuild on the map’s fringe. I was completely rope-a-doped! 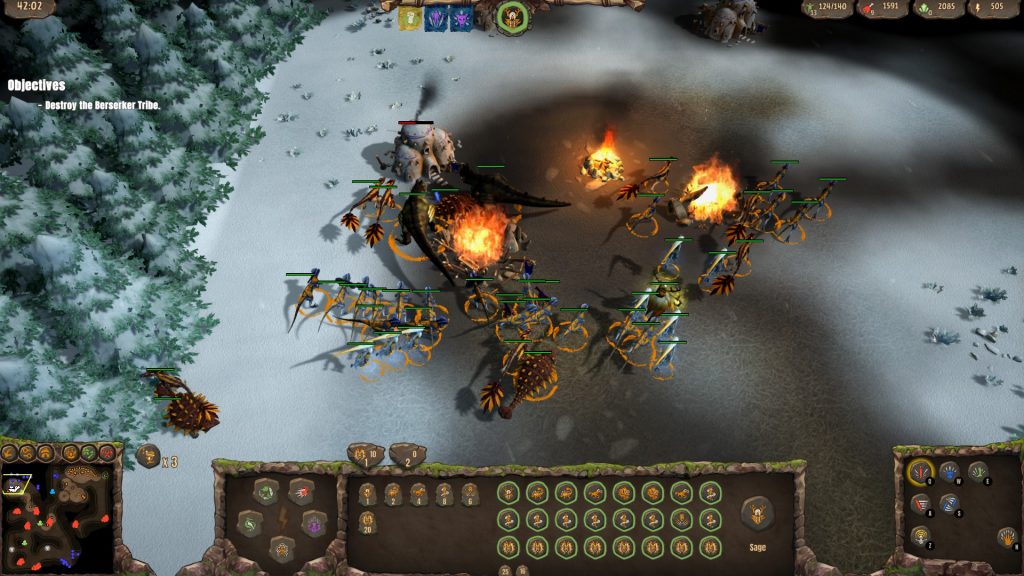 Eating up that base like a snack. Later, towers will be eating me up.

There are enough features in Warparty to demonstrate that Warcave and Crazy Monkey Studios have a passion for real-time strategy, because it looks like they have been paying attention and taking notes on what has worked for the genre in the past.  However, the version of the game that I played could still use polish; though the developers have promised “day one” patches to resolve some of my release-week Early Access gripes, I judge the game based upon what I have experienced. I think Warparty‘s greatest claim to fame is that it will be the first RTS experience for some gamers this generation, especially on Switch. There are better options on PC….

Warparty provides just enough fun for me to overlook some of its flaws to stay and play.