Vampire: The Masquerade was a strange part of my household’s PC gaming history, and one of the first that we had to download a patch for. Though its roots are much deeper in the tabletop realm, many other PC players might be somewhat familiar with the franchise, thanks to Vampire the Masquerade: Bloodlines—which has a sequel on the way. Little did many of us know, the “World of Darkness” universe has another side to it, known as Werewolf: The Apocalypse.

We’ve played as vampires many times, in games such as Vampyr, Legacy of Kain, and more. However, we’ve spent very little time as Lycans; too few, in my opinion. In Werewolf: The Apocalypse – Earthblood, you’ll be doing precisely that. While only being a small slice of the universe and somewhat flawed, it is the only modern Lycanthropic power fantasy that we #TeamJacob fans have. Though my experience was fun and action-packed, it had me howling for more. 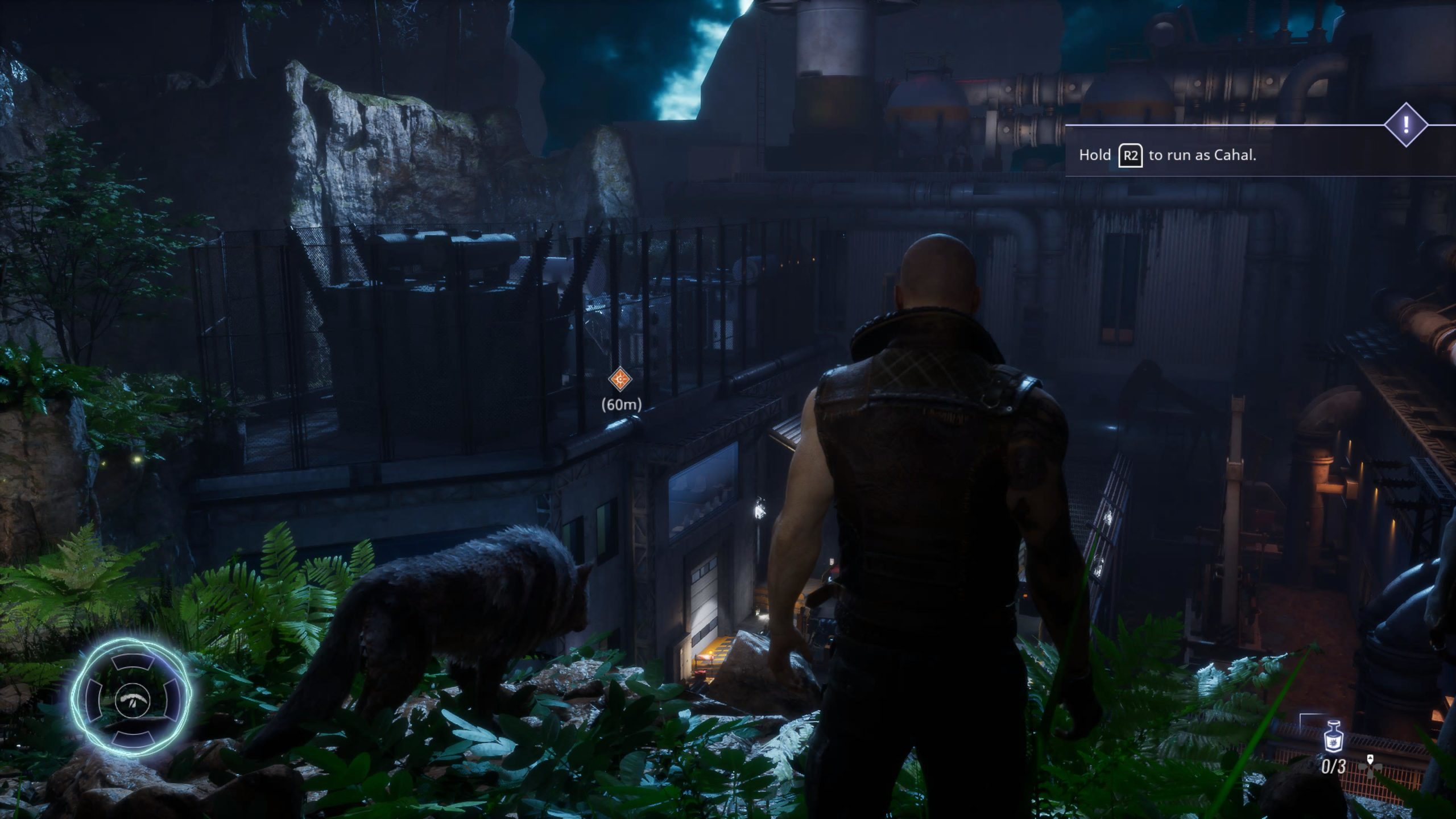 Spiritual Content: The title of this game already tells us that the game includes supernatural elements. Players take control of a man who can transform into a werewolf. Furthermore, the Werewolf clans in this game are protectors of Gaia, a.ka. Planet Earth. Characters communicate with spiritual beings connected to our planet. Players can pick up items that represent the spirituality of their beliefs, which gives extra experience points.

Violence: When transformed, players will be slashing, grabbing, and tearing apart human enemies. Large splashes of blood and cries of pain accompany this visceral combat. When in human form, players can snap enemies’ necks and shoot them from a distance with a crossbow. Enemy characters will fire at the player character with various guns and utilize mechs that use electricity and fire-based weapons.

Drugs/Alcohol: Each level contains flasks around the environment that players have the option to drink to increase their rage meter; it isn’t said what is in them. Lines of dialogue include references to drugs by mentioning drug trade, needing a fix, and visiting a dealer. One scene depicts the player character acquiring uppers from a drug dealer.

Language: Characters use the words “f**k” and “sh*t” in the dialogue. 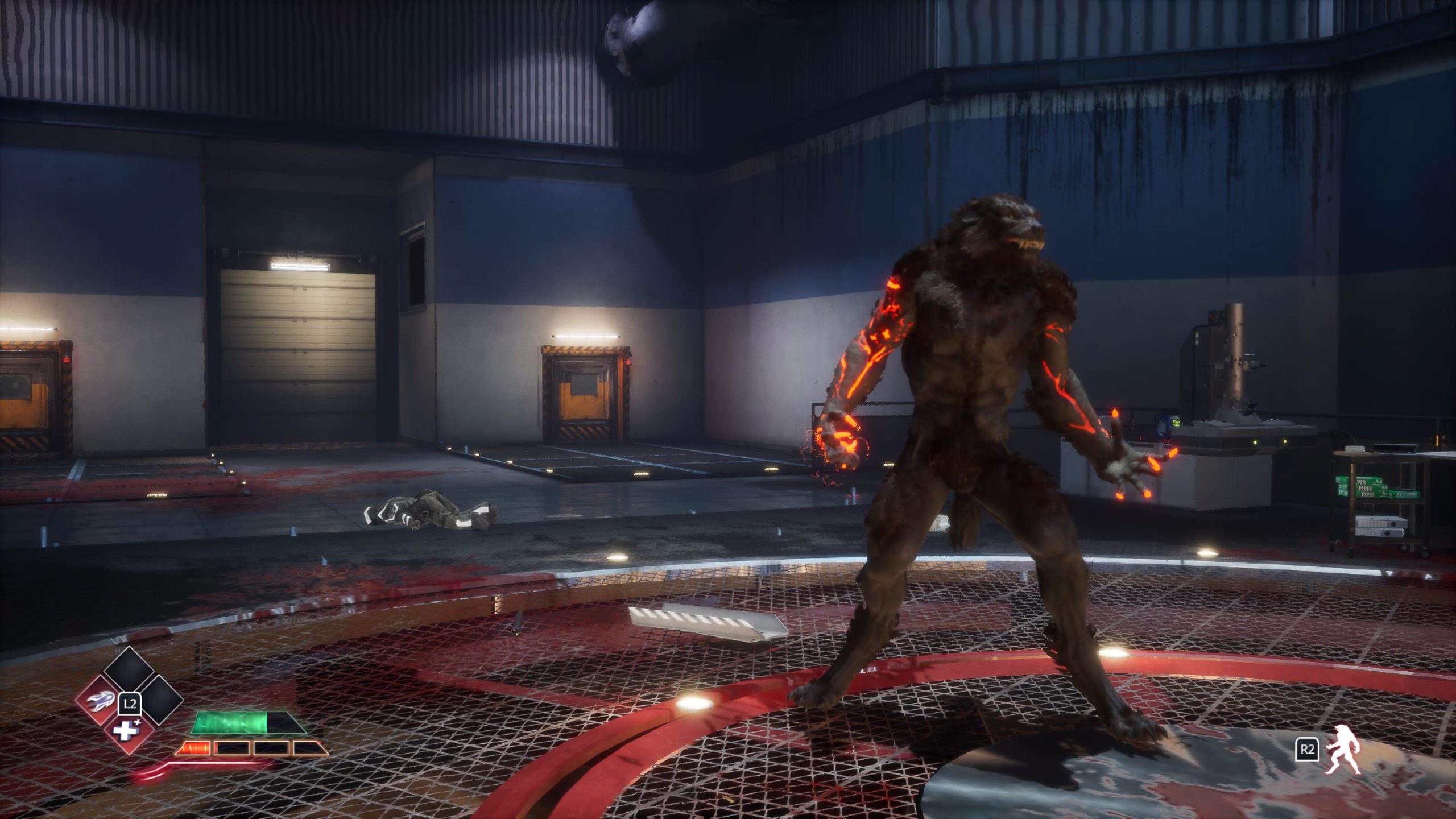 In Werewolf: The Apocalypse – Earthblood, you play as Cahal; A member of a clan of werewolves aiming to takedown a mega-corporation that uses a subsidiary known as Endron that extracts energy from the Earth. While on a mission, his wife is killed, leading him to rage and accidentally kill a tribe member. After a self-imposed exile, Cahal returns five years later. This story is a small slice of the in-depth lore that makes up the World of Darkness universe.

The story as a whole is not overtly praiseworthy, though I found myself invested in learning more about the characters you interact with in between missions. My biggest struggle is deciding whether Cahal made the right move by exiling himself; because the rest of the clan seems never to let him forget about it. It looks as if they didn’t think his decision was necessary when his reasoning sounds legitimate. The redeeming relationship was the one he shares with his daughter—who has every right to be upset with him. When he sees her after so much time away, she initially gives him the cold shoulder, but soon becomes grateful for his return. It was quite a heartwarming moment when she dropped her guard a bit more and told him that she’s happy to have him back. 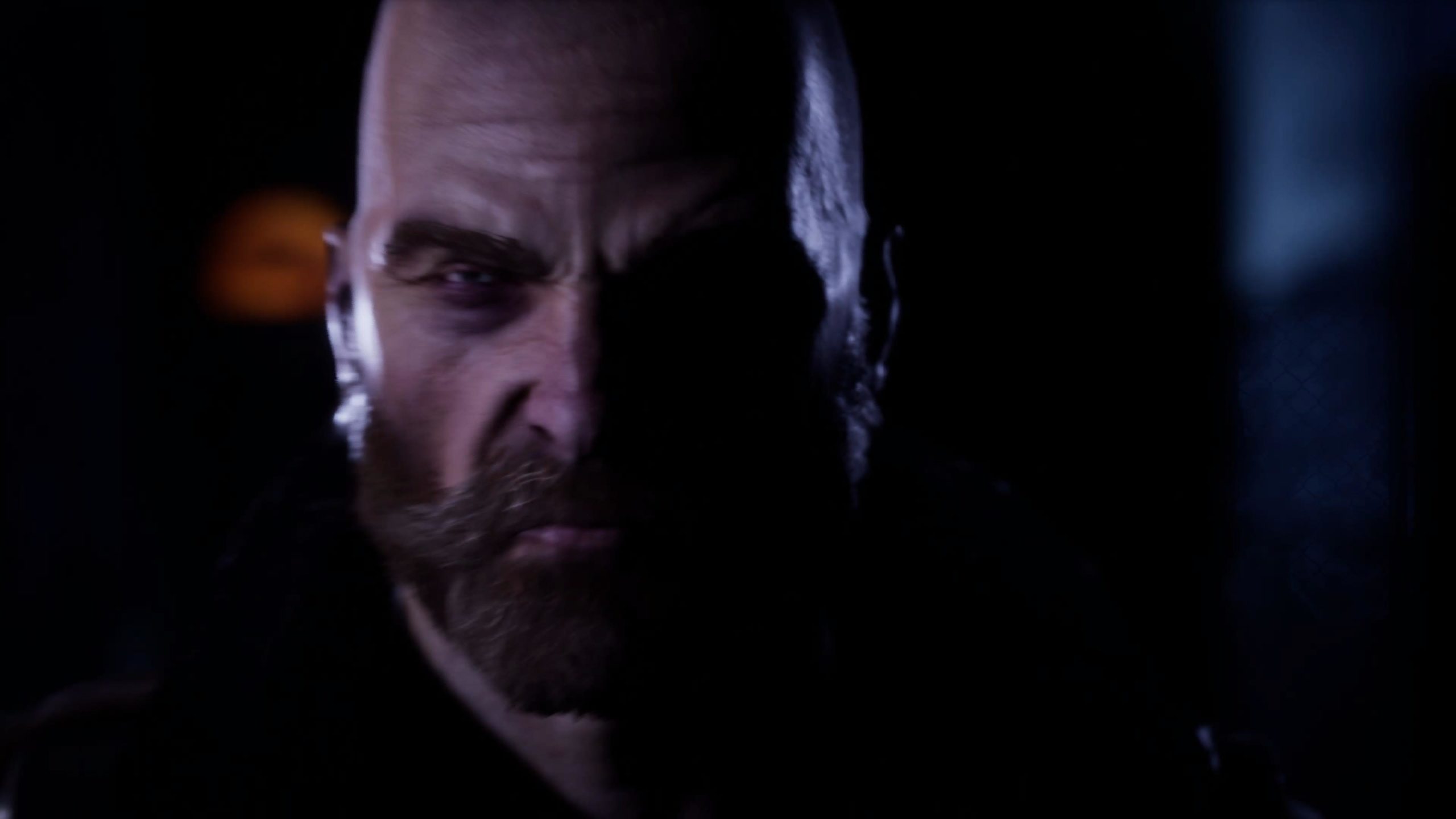 The presentation of Werewolf: The Apocalypse also isn’t anything to write home about either. Visually, it looks like the game could potentially span across three platform generations. Aside from a few tracks, most of the music in the game consists of heavy metal music that kicks in when it’s time to slash through a room full of guards. On a more positive note, the next-gen version seems to have improved lighting due to the technology in the PlayStation 5, which is where I played the game. So I can’t say for sure how it runs on the previous generation of consoles.

Where I believe Werewolf shines is in the gameplay. Players can stealth through most areas or could walk into a room and engage in combat right away. While many games struggle with a good balance of the two, I never felt that it leaned too hard in a particular direction. Some might find it unfortunate that the locations you’ll be creeping around in don’t differ much from one another. Though, as an eco-terrorist, it makes sense to be spending so much time inside industrial facilities and rigs to sabotage them. 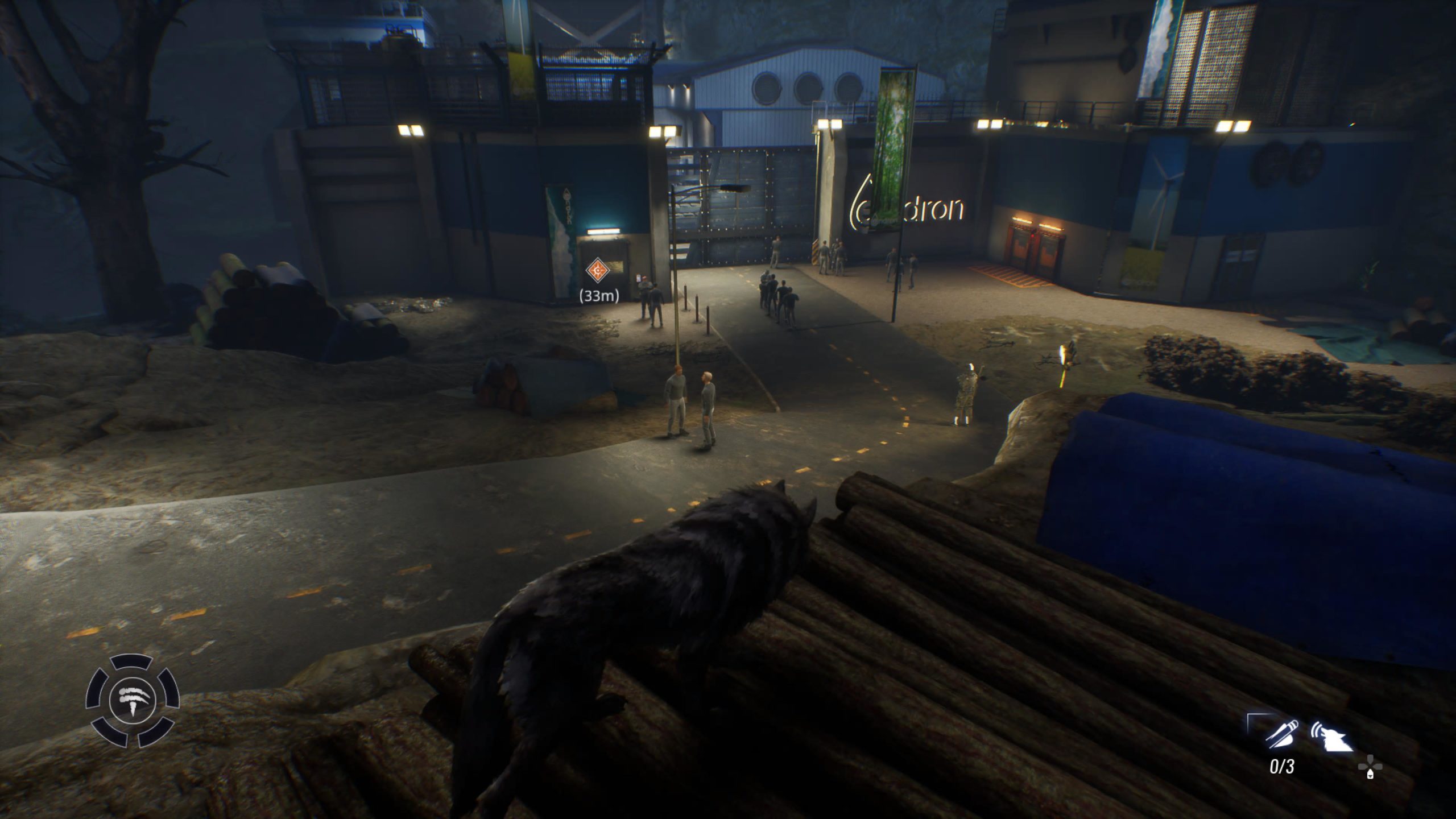 The stealth gameplay feels more forgiving than in other games, because it only alerts the room you are inside instead of the entire base. However, an extra challenge comes into play if you don’t disable any reinforcement-specific doors. It is best to use Cahal’s standard wolf form to sneak around through vents and for general traversal. To kill an enemy stealthily you can either snap their neck from behind, or fire a crossbow from a distance. Also, I’m thankful that Werewolf doesn’t punish me for going loud and using my abilities to their full extent—Cyanide knows the real reason you came to play their game.

An essential part of the stealth gameplay is Cahal’s Penumbera vision. Using this tool enables you to track down enemies and locate security cameras and doors. That technology has a line that can be followed in case progress dictates that you need to unlock certain doors. Turning off cameras also helps in navigating various rooms, because the whole room will be alerted when you are spotted by one of these. The Penumbra vision adds nothing new to this feature that was popularized thanks to Batman: Arkhum Asylum. 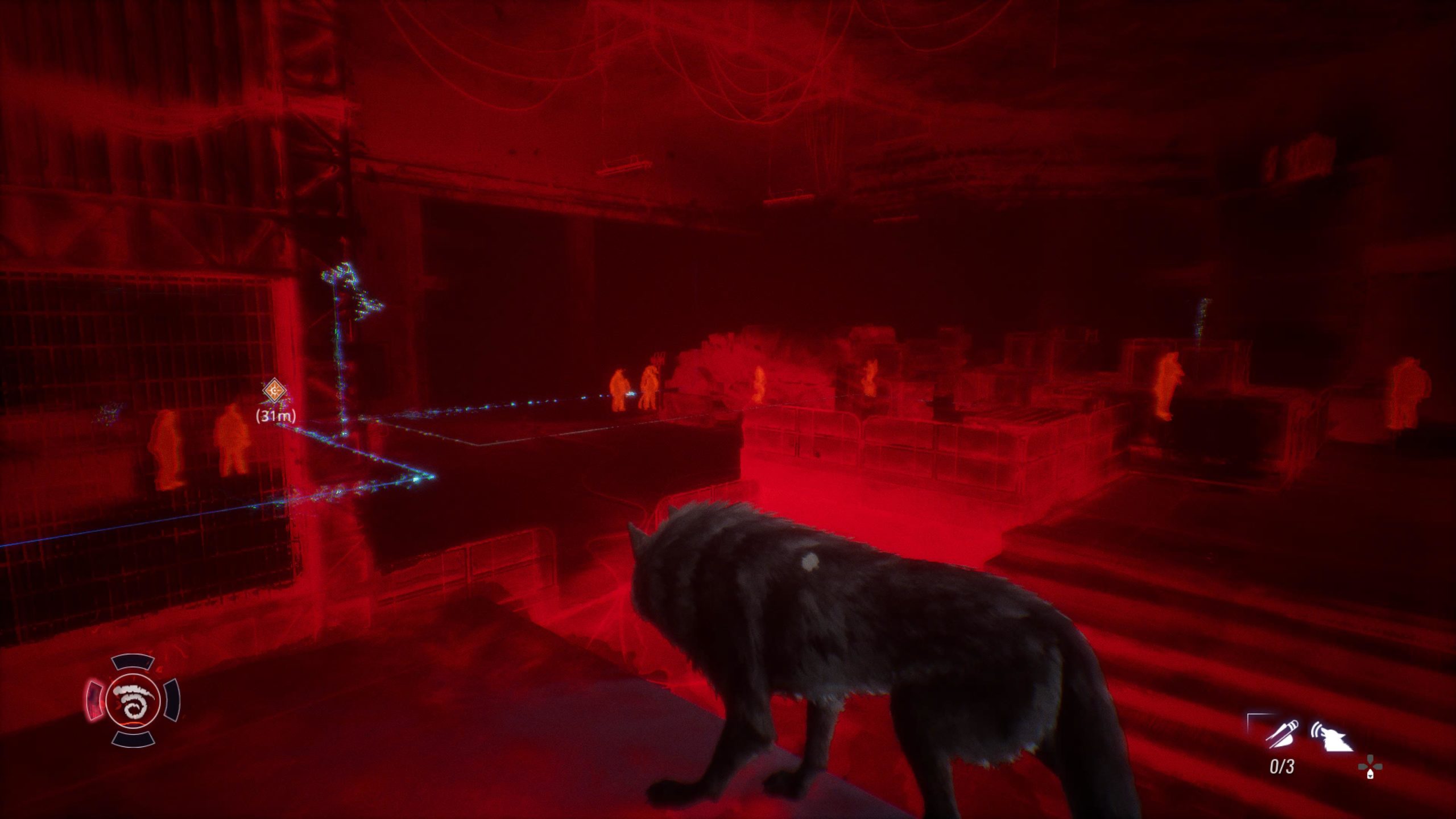 Cahal has another form, in which he stands on his hind legs, enabling you to go full Underworld on your enemies. By pulling R2/RT, you can switch between mobile and heavy forms that are best used for specific situations. Of course, there are particular abilities along with other perks that you’ll upgrade as more experience is earned. One of my favorite things to do in combat is grabbing my enemies and either ripping them apart or tossing them into the next group of baddies giving me grief. If I died, it was mostly user error, because Cahal has plenty of skills that I could use for my survival.

You quickly discover that your foes have silver bullets, which hinders your ability to heal. Some of my best moments played out when I was dodging those shots as needed, which would then help me enter a flow state that played out like a dance of blood and violence. Combat is frantic and can take time to get the hang of, especially with a lock-on that can be too loose at times—it can be hard to keep track of everything going on in the room. The most satisfying result of all the action is watching Cahal transform back into his human self after an encounter, then gazing at the new red paint job that you have just voluntarily given to the facility.

Lastly, you’ll notice quickly that dialogue options are available when interacting with other characters. These don’t have much effect on the story but can be fun within specific missions. On some occasions, you can interact with characters to interrogate them and gain information. One opportunity had me walking into a training facility to be recruited for infiltration, but my options were to tell the truth or lie to the commander. To experiment, I decided to tell the truth. Cahal says, “I’m here to blown this place up!” and transformed, which had me wipe everyone out that was present at the front gates. For a feature that goes underutilized, I was happy that some fun was had with it.

For the most part, I had low expectations and ultimately enjoyed my time with Werewolf: The Apocalypse – Earthblood. It gives us almost everything we could ask for in a video game that puts us in such a role. However, I can’t help but think that the intellectual property it comes from was underutilized. Vampire: The Masquerade and its two entries generously introduced players to its lore and world, and here it felt like we only got a small slice of the pie. It was a welcome introduction, but I want more from the raging doggo side of the World of Darkness universe.

Not every video game needs to be a masterpiece, but I believe that most folks who pay full price for this game won’t be satisfied. If you’re itching to play something new on that next-gen hardware you were lucky enough to acquire, there are likely better options. However, if you want a modern lycanthrope-centered power fantasy, this is your best option. I found Werewolf: The Apocalypse – Earthblood to be a solid palette cleanser after the many big fall releases we just went through last year.

Where Werewolf: The Apocalypse lacks in quality, it makes for in gameplay and one of the few lycanthrope-centered power fantasies around.