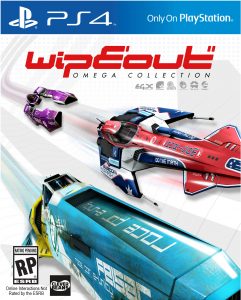 Packaged with every launch PlayStation in 1995 was a demo disc. As its name entails, it contained demonstrations of games such as Jumping Flash, Twisted Metal, Warhawk, and of course, wipEout. While I played Virtua Racing on the Sega Genesis, and Virtua Fighter on the Saturn, the games on this demo disk felt like my first forray into the realm o the z-axis but without rails. Between all of these games that simulated future scenarios, I “wuz not E.” Fast forward over twenty years later, and wipEout Omega Collection brings forth memories. 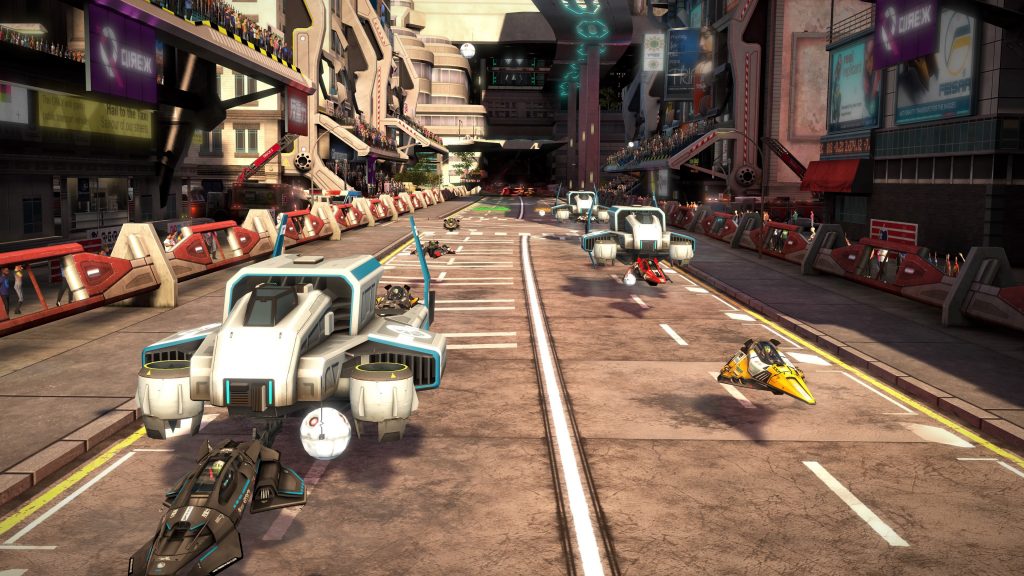 Like most racers (that do not implement vulgar secular music), wipEout is completely clean. 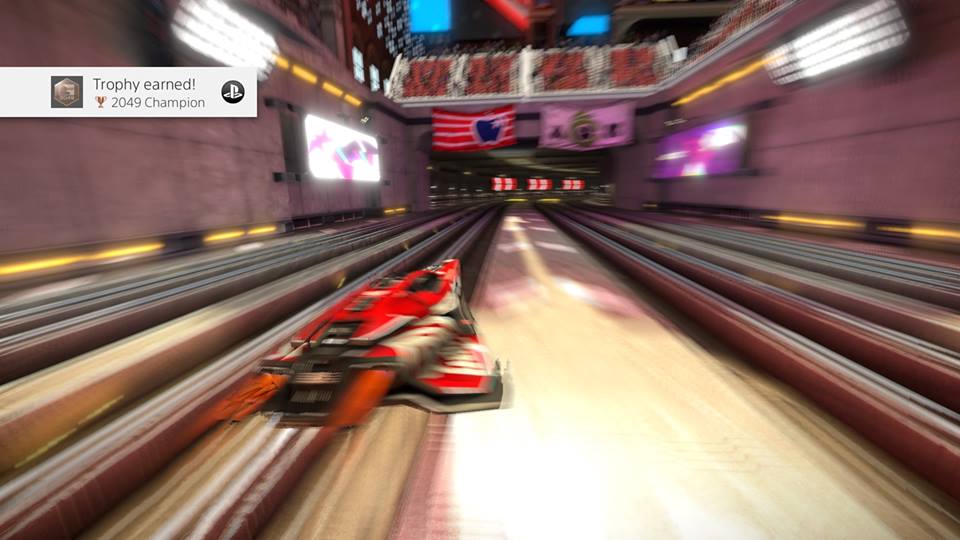 Objects in screenshot are not as fast as they appear.

I was expecting to be able to play remastered versions of all nine of the wipEout games, but the wipEout Omega Collection only includes the most recent two games: 2008’s PS3 release of wipEout HD with 2009 expansion pack wipEout Fury built-in, and 2012’s wipEout 2048 for the Vita. Both games (base) games are unlocked from the beginning, though one must win races to unlock additional, theoretically more difficult tiers, in addition to more racers. This gradual dispersal of options is the game’s innate “grind.”

For those unfamiliar with wipEout gameplay, the concept behind the game is that the speed of racers is supposed to simulate zero-gravity racing. With the lack of vehicle-to-surface friction, one should theoretically achieve speeds that would have otherwise been impossible. As is common in speed racers, one would do well to intentionally aim for driving over boosting strips to accelerate, and collect two different kinds of weapons. Green tiles provides mines or bombs deployed from the rear; yellow tiles can provide guns, rockets, homing-missiles, (a really cool, powerful, yet difficult to aim) plasma rifle, shields, and a turbo boost.

The Anti-Gravity Racing Championship series, has a long and storied history. Thus, for entertainment purposes, I would recommend reading about the various teams participating; there are fourteen in total. I tend to rotate through them all for various reasons, though I rarely race with Van-Über Racing; I use FIESAR the most, as I recognised the team from the PSX days. 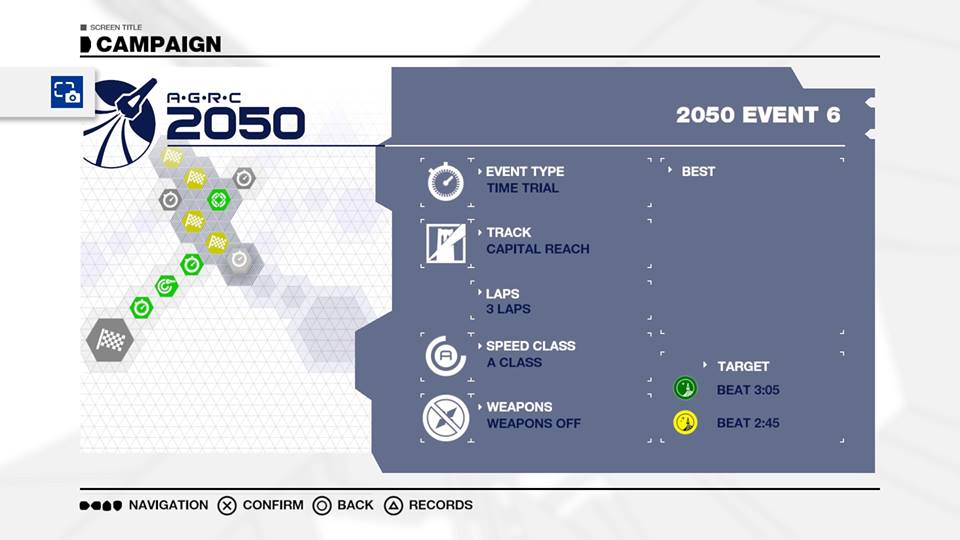 I am not a fan of the wipEout 2048 menu. Are the lightly shaded areas future races? If so, look at how they’re hidden behind boring time trials!

Interestingly enough, even though wipEout 2048 is the most recent game in the series, I prefer the campaign and menus of wipEout HD. The honeycomb-style menu layout is simply more intuitive for selecting races; the race selection format in wipEout 2048 is cryptic, as I can never tell how to unlock the next race in progression. The profusion of time trial races, my least favorite race type, contributes to this, as additional races might be hidden behind finishing a time trial. I prefer the wipEout 2048 menu, as its path to unlock more races is plainly discernable. Luckily, all racing ships are organized based upon statistics such as speed, handling, and shields, regardless of which wipEout game selected. 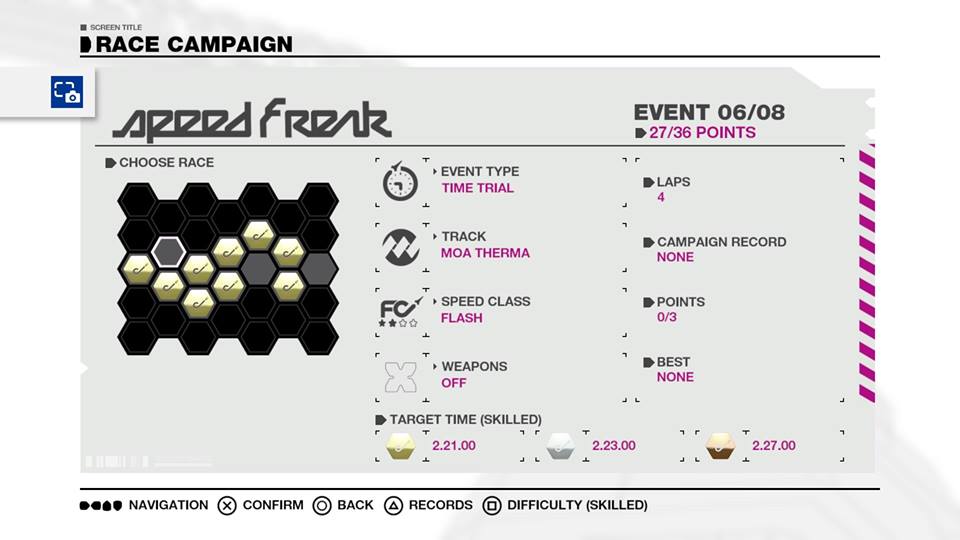 The wipEout HD menu is ideal. The sequence is easier to read.

In terms of actual racing, to the credit of wipEout Omega Collection, there is plenty to do—almost too much…of the same thing. Here, I am referencing time trial mode, which is my least-favorite mode in all of racing. I prefer competing against a field rather than myself; its frequency in wipEout Omega Collection provokes my disdain. To make things worse, in wipEout HD, future races to unlock are hidden behind time trials. Gross. On the plus side is speed lap mode, which allows players up to seven laps to achieve the fastest posted time. This oftentimes requires one to eventually run a perfect lap while selecting the ideal time to use the turbo boost allocated once per lap. If every racing game adopted speed lap mode and abandoned time trial, I would be all for it.

It took me awhile to adjust to Detonator mode inthe Fury expansion, as it plays less like a race, and more like a SHUMP. One must achieve a certain score by shooting obstacles and hazards encountered on the race track. Eliminator is a mode where everyone drives for an infinite number of laps until someone accumulates another predetermined number of points to win, but instead of shooting a stationary targets, one will shoot at other competitors. Expect to hear “contender eliminated” frequently in this mode, and be sure to drive a ship with a high shield rating.Hint:Trakis favors military-grade paint jobs. In wipEout 2048, combat mode is the equivalent of eliminator mode. In this mode, one does as much damage as possible within a three-minute time limit. Hint: pick Quirex, because it looks like a battleship more than a racer.

Zone is my favorite mode. With all scenery stripped into basic pastel colors and no breaking allowed, this is the game’s pure speed mode. The longer one endures, the faster their ship goes, until it becomes an uncontrollable ping pong ball on the track, and dissolves from damage. Building on this is zone battle mode, where one now competes against a field of racers in a competition to reach a certain tier of speed first. Here, one will want to aim for boosters to fill the zone bar at the bottom of the screen which is used to either boost ahead in zones (recommended) or create hazard barriers to foil and the competition (the AI does this almost exclusively).

Ironically, Zone mode exacerbates my biggest gripe with wipEout Omega Collection: the game is slow. I am figuratively expecting to move at light speed—at minimum, I break the sound barrier every now and then. But what I get here is an experience similar to to Mario Kart at 200cc, but with a significantly thinner race track. Perhaps the developers desired gamers to enjoy the gorgeous tracks at a silky-smooth 60 fps simultaneously with every race. I will admit that in a faster game, the racing is so intense that I do not have time to admire any of the painstakingly-rendered scenery, and can only appreciate it through watching replays or looking at still images. I must concede that this iteration wipEout is the best looking racer that I have played. However, I would have gladly traded in some of its detail for a more consistent experience of competing neck-and-neck with the AI. I do not feel that wipEout captures that tension, so much as it is a showcase of the various beautiful ships.

The music selection is mostly disappointing. There are a few tracks worth not skipping, such as “Obsidian,” and “Antidote,” while songs like “Bring it Like That” and  “You Got To” are middling. The only two songs I love are “Breathe,” and “Double Edge,” and the latter is a (“GeRM”) a replay from Gran Turismo 5. Because music in racing games is paramount to the experience, and the paltry playlist of twenty-eight songs in wipEout Omega Collection is disproportionately meager compared to the number of events in the game (there are 60 in wipEout 3048 alone), I felt compelled to sign up for Spotify for the first time ever (welcome to 2012 a GUG staff member told me on Twitter), and cop that some of that CoLD SToRAGE, son! I would expect more from my soundtrack in an A/AA release, so this should not be necessary.

wipEout Omega Collection is a swan son for the series, as its original developer, for the recently-closed studio, Studio Liverpool, AKA Psygnosis Limited, closed in 2012. The result of the combined efforts of Sony XDev Europe, Clever Beans  and EPOS Game Studios still holds up in 2017/2018, and it is now possible to play on PS VR, too. That said, there was a time when wipEout was  in pole position in the category of futuristic racers, with all others in the rear. The franchise is beginning to look like Lightning McQueen in Cars 3, and the (indie) competition has made up ground with immaculate speed. 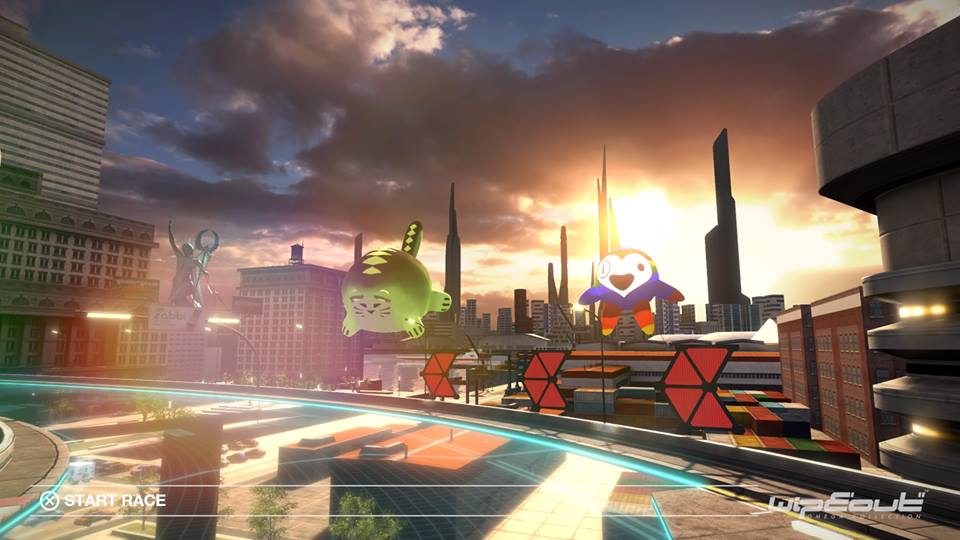 wipEout remains the most renowned of futuristic racers, delivering AAA-tier visuals and similar gameplay. Yet time will tell how much pedigree alone will suffice in the stead of innovation.