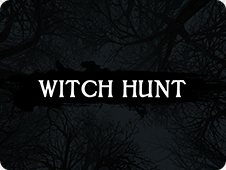 The feeling of horror can sometimes be a challenging one to evoke. Yet in gaming, there is something that will make even the bravest person shudder in terror. In a desensitizing sea of demons, corpses, and haunted animatronics, there is something for which the fear never fades away, a feature that fills any gamer with dread. Two little words: early access. Now perhaps that is a bit of an exaggeration, but it is true that the term “early access” has become something of a dirty word in certain corners of the gamer community. What began as a good idea—letting the community become a part of the game design process—has been in many cases perverted; developers releasing buggy, unfinished products at full price, with the vague promise of eventually finishing them.

This is why it is so refreshing to see a developer make use of this model as it was intended. Andrii Vintsevych announced Witch Hunt in August last year, put it out on early access in June, and finally released the game in full at the beginning of the month. The prompt release schedule is not an anomaly for this developer, and it would seem that it pays off.

Spiritual Content: Unsurprisingly, Witch Hunt makes heavy use of religious and mystical elements and symbols. Undead monsters roam the woods, and there is a witch practicing her craft. The majority of the supernatural elements are hostile and obviously evil. However, the protagonist also has access to various supernatural abilities and tools; these range from silver bullets, crosses and totems, and abilities described as magic.

Violence: A body prominently hangs on the gallows in town. It is common to come across evidence of violence such as human corpses, torn animal carcasses, and pools of blood. Actual violence the player inflicts is limited to monsters and animals. Enemies do not display noticeable injuries when struck and killed; rather, blood appears on the protagonist’s sword when he inflicts damage on enemies.

Other Negative Themes: The protagonist can use lockpicks, and can purchase or find a book to increase his skill. It is possible to use them to break into houses and chests in the village that presumably belong or belonged to others. You can get an achievement titled “Atheist.”

Positive Content: The protagonist describes in their backstory how they began hunting out of a thirst for vengeance but was then put onto a better path. Their narration makes it clear that the primary motive for hunting monsters is not profit but a genuine desire to help the townsfolk.

Horror can be a difficult beast to handle in video games. Ultimately it can be described as a balancing act: one the one hand, a game must be engaging and challenging while remaining fair. On the other, horror demands a certain degree of helplessness. If the scared camp counselors could just pick up a gun and effectively fight back against the ax-wielding maniac, you’d be watching action, not horror. Add to this the fact that so much “horror” ends up devolving into either visceral gore or jumpscares, and it’s easy to simply expect entries in the genre to handle this poorly more often than not. 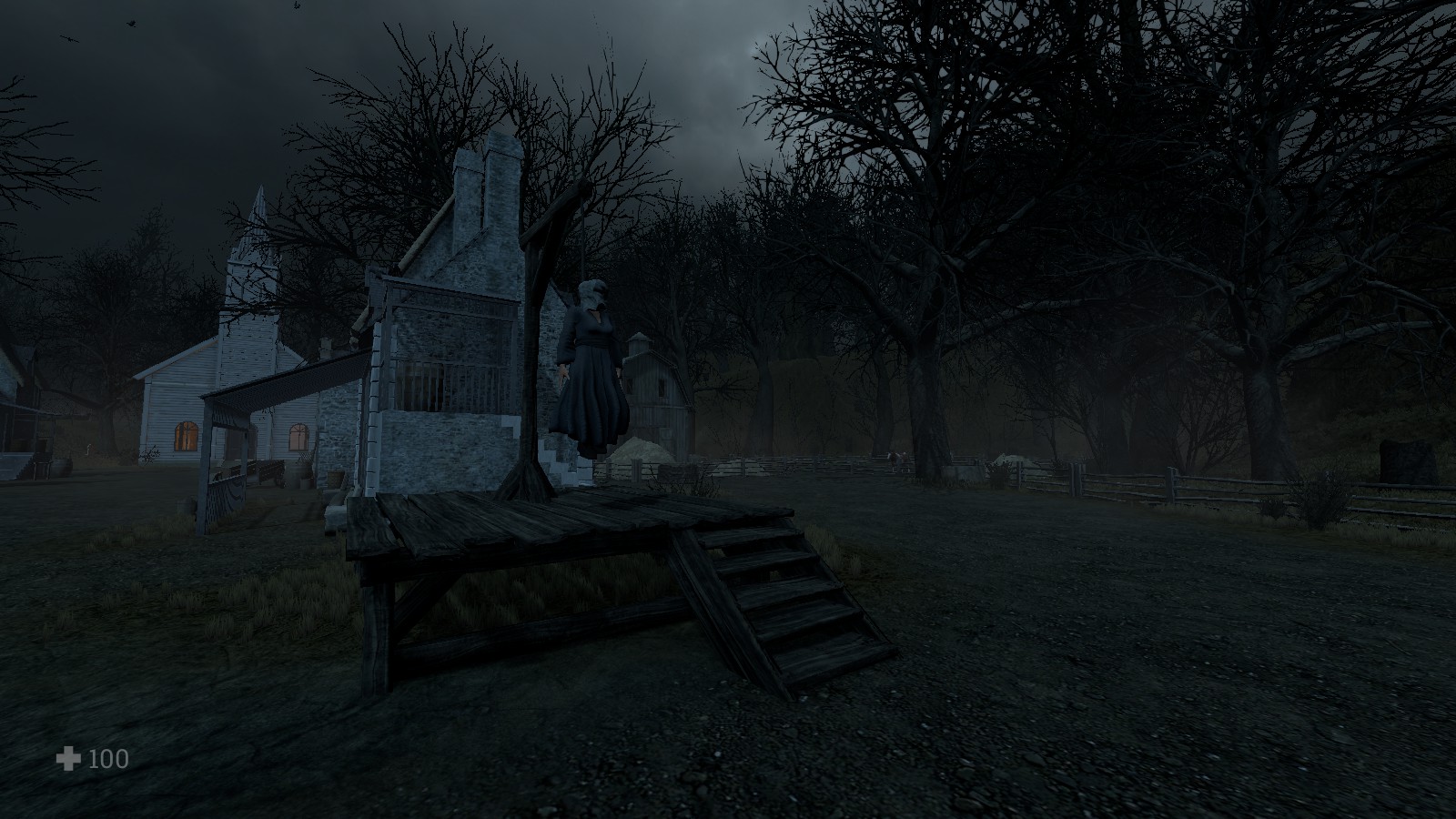 The highest praise I can possibly give Andrii Vintsevych is that he seems to get horror. In Witch Hunt, you play a hunter of monsters and demons. This is no indestructible superhero however; he is a mortal man, and quite vulnerable to the dangers he faces. Of course you certainly could expect that some of the bigger monsters lurking in the forest—such as a giant werewolf or the titular witch—would pose a threat, but even lesser enemies can and will cause you a lot of trouble. If a zombie or other minor beast gets the drop on you, you’re just as likely to fall to it as you are the more dramatic enemies.

The other half of the game’s major promise is that it doesn’t hold your hand. This too holds up to inspection. In just about all matters, the game gives you only the barest of explanations; after this, you’re pushed out the proverbial door and have to fend for yourself. Once again, this all lends itself to the feel of dread that good horror brings up. You don’t have an easy to reference guide to what each enemy is like. You can never even be sure if you’ve seen all the game has to offer you. How to you defeat something that hurts you just by looking at it? Where other games might tell you plainly, Witch Hunt fully expects you to figure it out for yourself or die trying. 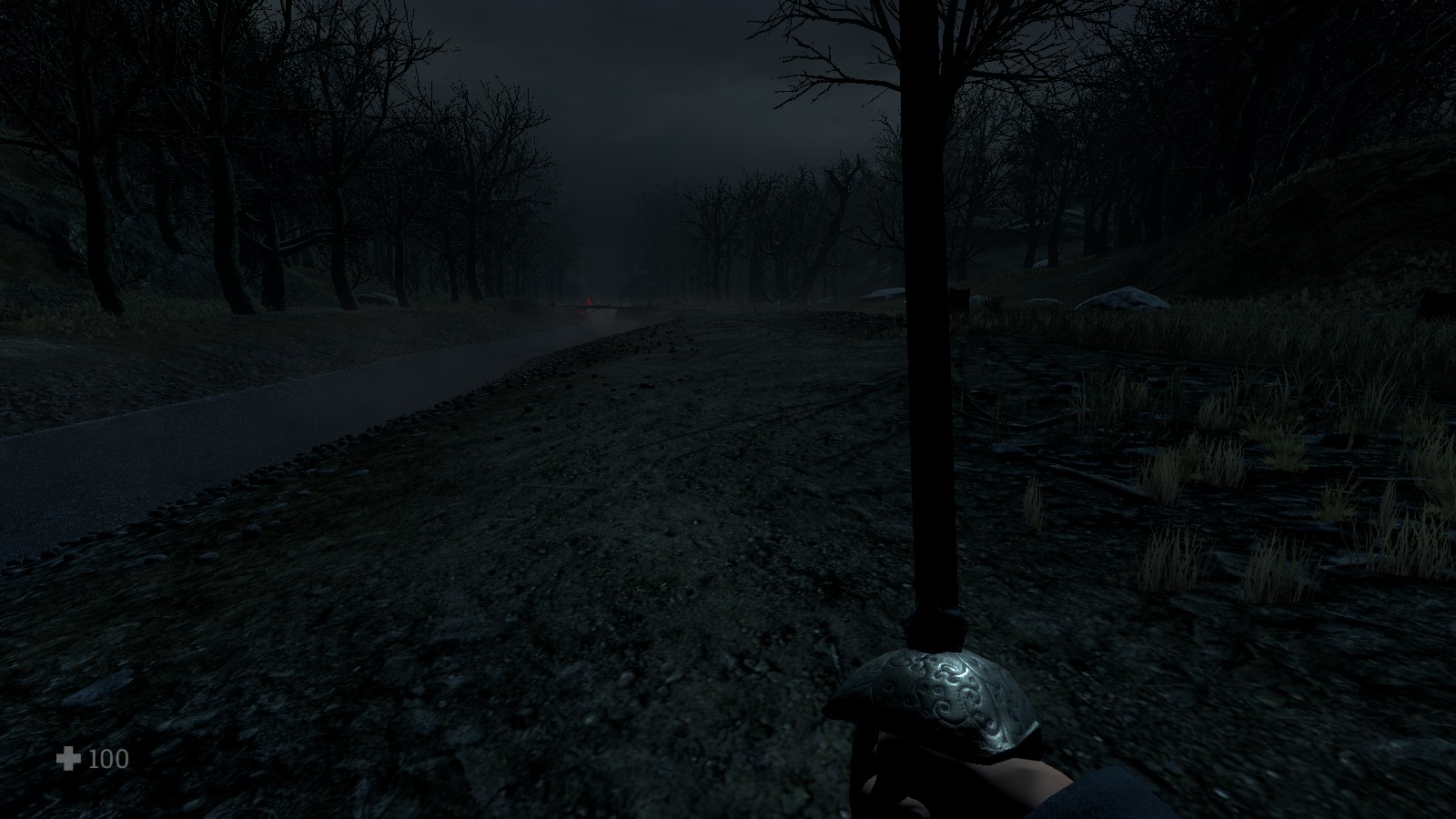 The basic gameplay loop for Witch Hunt is fairly simple. From the town of Belville, you venture into the woods. There, you have your target, a monster, that you must slay. Once again the game doesn’t give you an easy out like pointing to where it is on the map. In fact, you don’t even have a map to work with until you find one. You have two skills with which you primarily track down your target. First, you have a special sense which tells you when you’re within 500 meters of it. The second and more interesting trick you have is Evil Sight, which lets you see from the target’s perspective for a few seconds. This clever method requires you to use landmarks and logic to deduce where the monster is and where it might be heading. 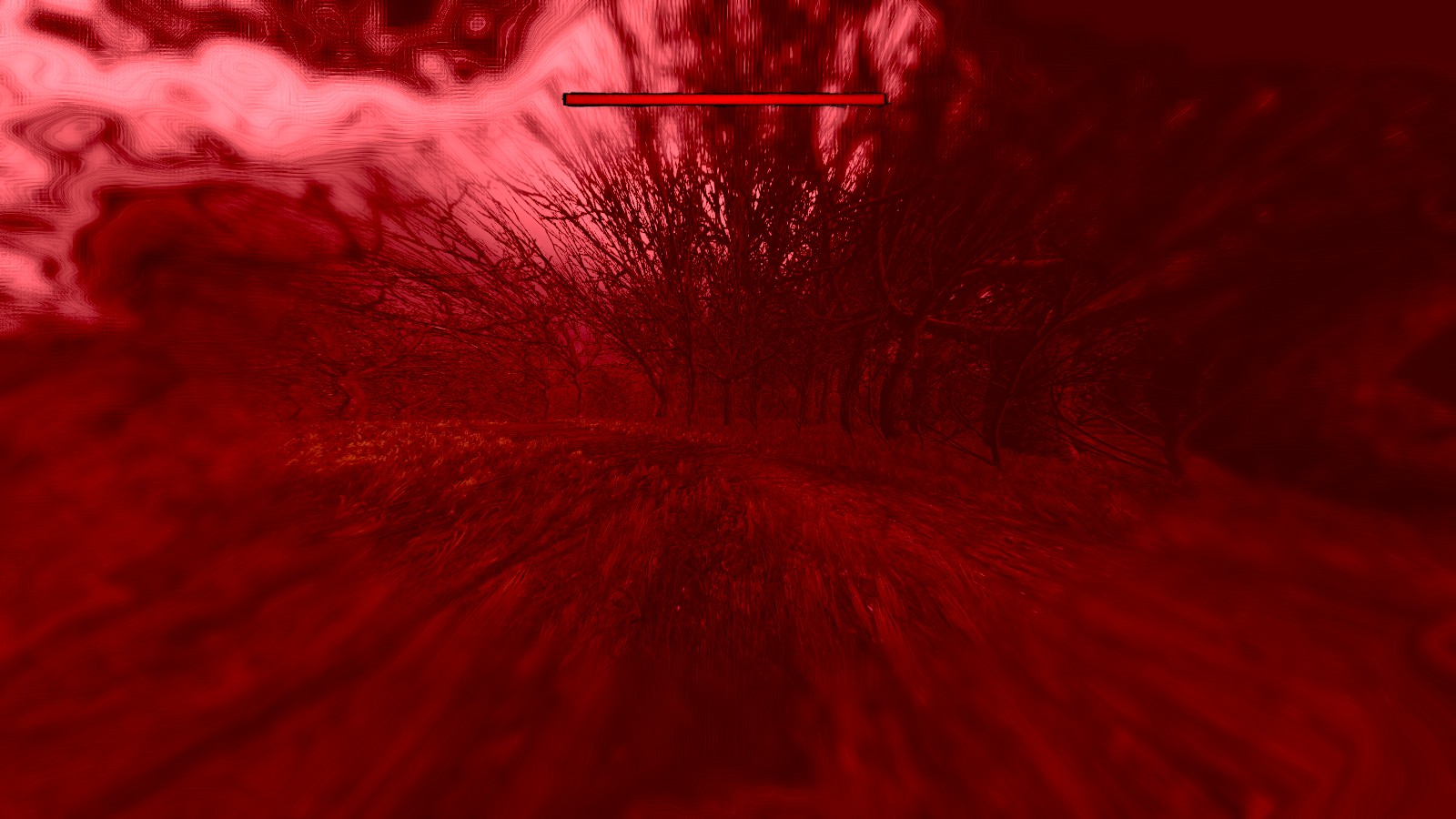 The map itself it static, as are most of the collectibles one can find in it. This is perhaps one of the few immersion breaking elements that can negatively influence the horror of the game. It is perhaps a necessary evil; if the map wasn’t consistent, there would be no way you could learn it to the degree required to track down your target. This aspect can be easily forgiven, especially since the environment is perfectly haunting. The textures certainly aren’t triple A standard, but they really don’t need to be. What’s truly impressive is how well light and mist effects are used, creating a dark, brooding setting where it feels like something can jump out at you from anywhere.

Even better than how it looks is how it sounds. Ambient noises fill the wood: the cracking of branches beneath your feet; the creaking of trees’ limbs; the flapping of wings and the whistle of wind; the heavy beating of your own heart as you near your target; and every so often, a faint, almost inaudible whisper: “I know you are here.” The noise does more than set the mood too; enemies also make appropriately frightening sounds, which serve as the best way to pinpoint their location before they can attack. 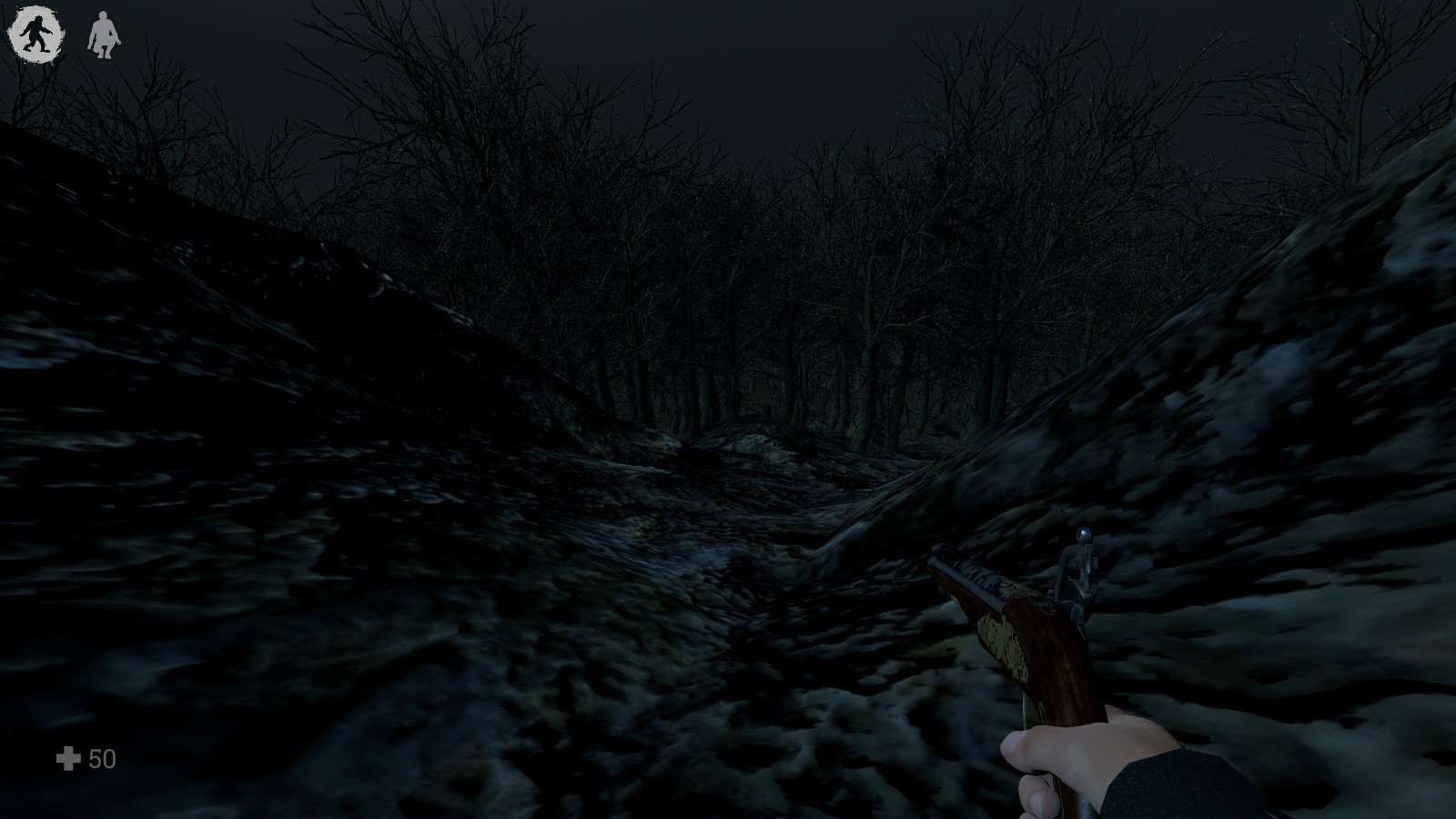 As you continue your hunt you collect various helpful items, either from within the woods or village, or from a merchant in town. These allow for some progression and customization. Most prominently are the books which unlock various skills: these range from increasing your stealth or lockpicking skills to letting you return to town at any point as long as you have max health and mana. Each ability is valuable enough to feel worthwhile; at the same time, none feel so impressive that you ever stop feeling vulnerable to the threats that face you on your hunt. 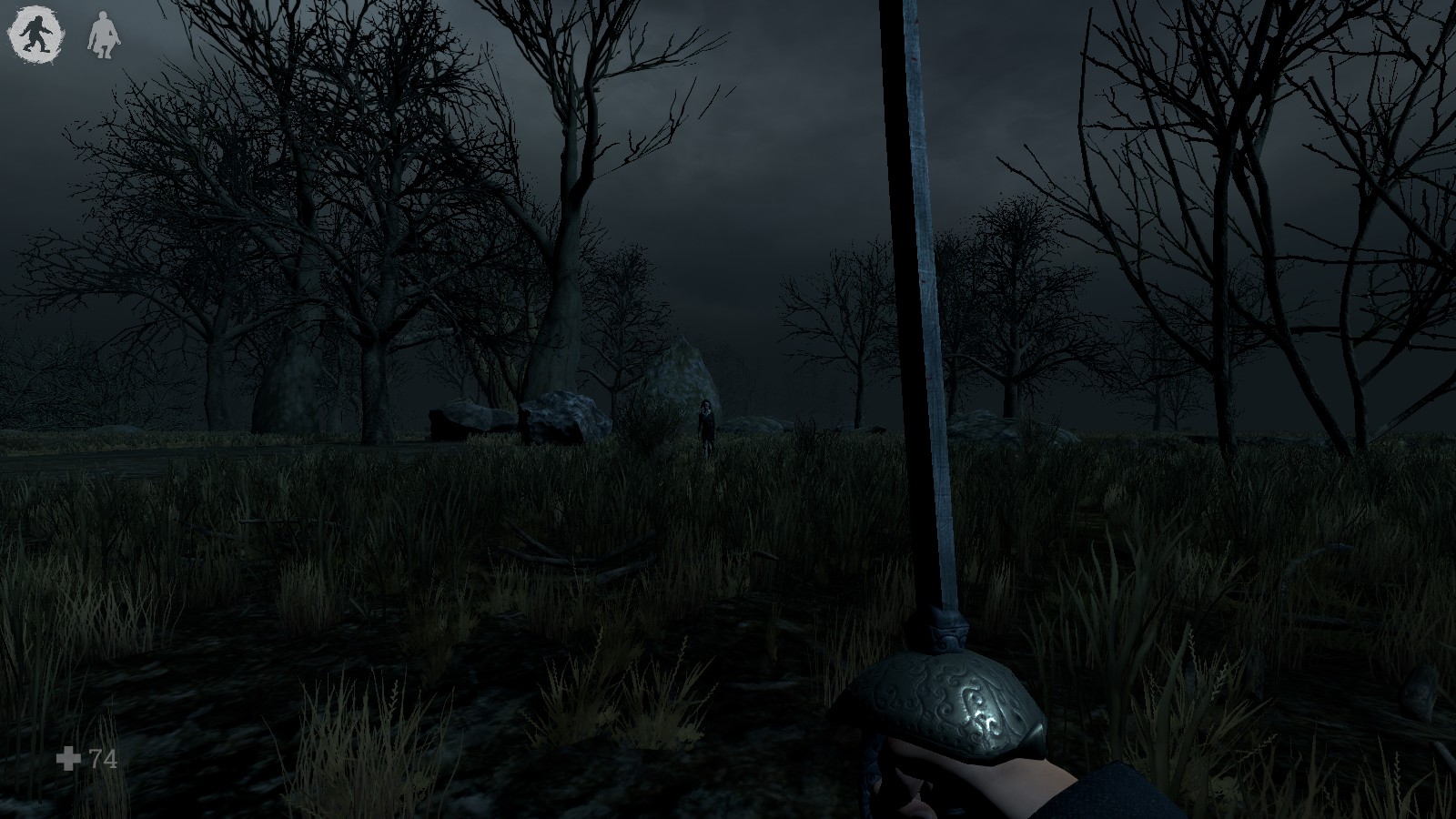 In the end, Witch Hunt inspires minor complaints at worst. A player can walk along vertical walls or find themselves stuck between invisible walls on occasion. This usually only happens when attempted on purpose however. Perhaps the worst you can say is that Witch Hunt doesn’t really do too much that’s new. Apart from its unique method of tracking down a target, much of the story, design, and gameplay all make use of elements players are likely familiar with from other horror games.

This isn’t a terrible condemnation though. It’s like a meal: sometimes I want to be adventurous, trying something new and foreign; other times, however, I can just tuck in with a classic home made dish. Witch Hunt might be familiar, but it’s executed well.

Witch Hunt may do what has been done before, but it does it very well. Andrii Vintsevych makes full use of his resources to create a chilling atmosphere, perfect for a horror game. Though it requires patience, the thrill of the hunt is ever present.