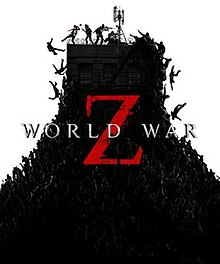 Since their rise to current cultural prominence in games like Left 4 Dead and Call of Duty: World at War, zombie survival modes have become the peanut butter to the shooter’s chocolate. When a shooter releases, there is a good chance that a zombie or survival type mode will come with it, pitting four to five players against the monsters knocking at their defenses.

Of course, not all zombie games are made equal. Resident Evil has retooled its gameplay several times over the years, Call of Duty has added more and more complex systems to polish their clearly aging formula, and games like Telltale’s Walking Dead and Naughty Dog’s The Last of Us have earned critical acclaim by taking the genre in a more dramatic direction. In the midst of this, where does Saber Interactive’s new zombie title World War Z land? 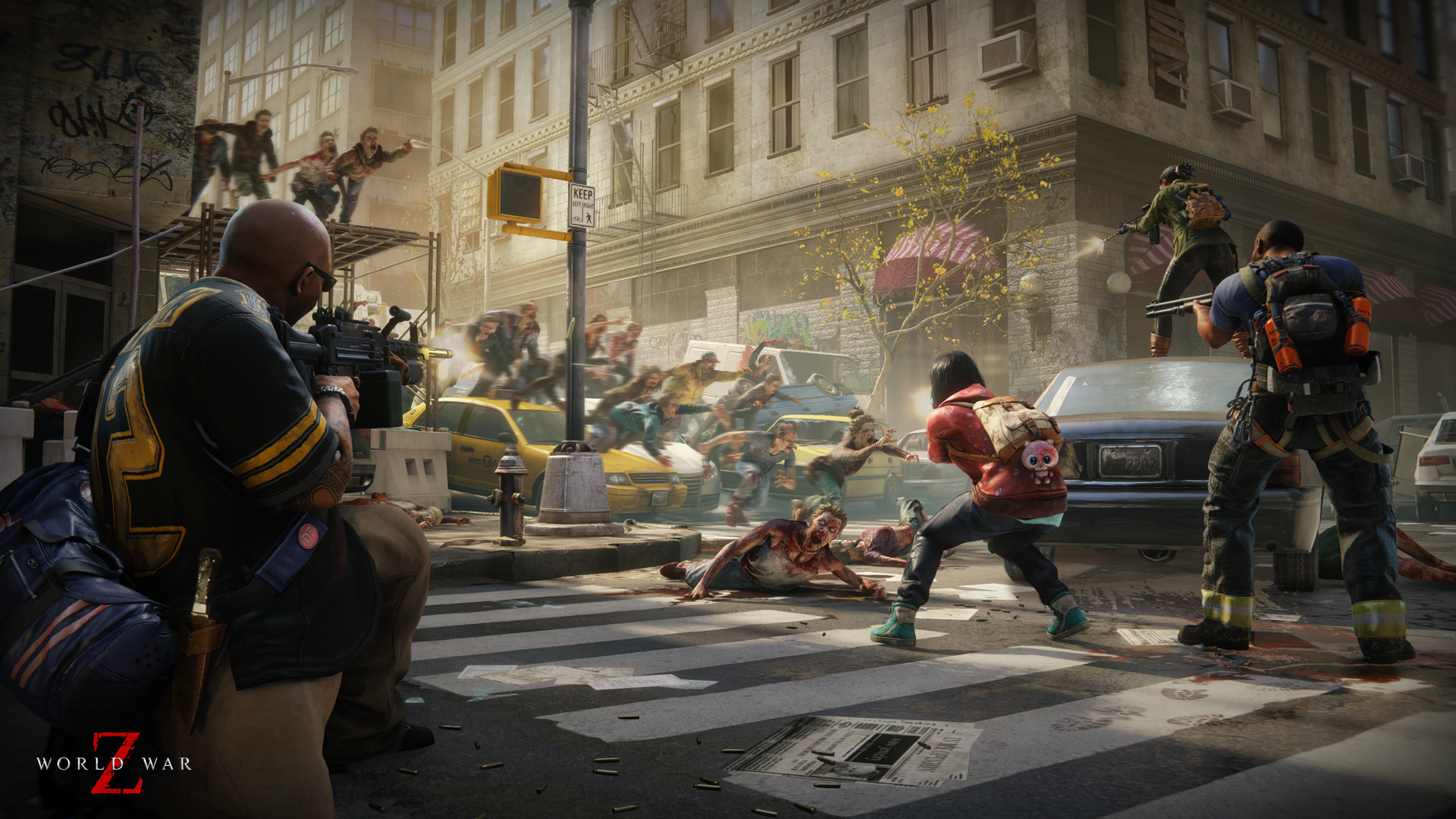 Violence: You and your team utilize a variety of weapons to dispatch literal swarms of undead. From machetes to RPGs, your weapon of preference is here to use, except bow & arrow (RIP Hawkeye power fantasy). With these kills, there is lots of gore. Headshots leave stumps of what once was a skull upon a neck and various places around each level have blood splatters on the walls and floors indicating the deaths of countless civilians.

Language: F*ck, *ss, son of a b*tch, and sh*t are commonly spoken in a variety of contexts. The Lord’s name is also taken in vain on a few separate occasions. 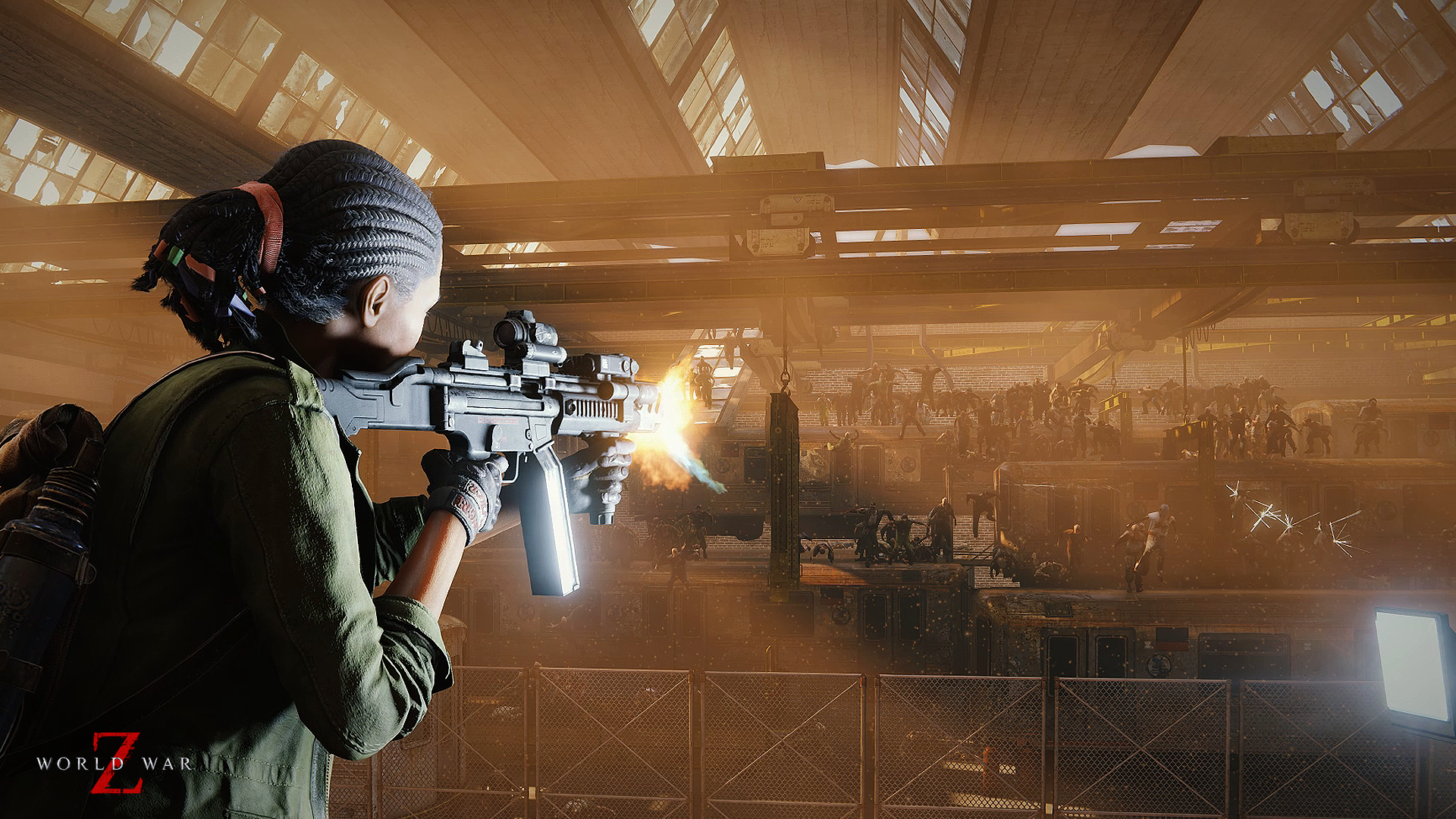 No matter the case, World War Z is something familiar done right. The wheel is not remade or drastically changed, it merely is done how it should be. Adapted from the 2013 film of the same name which in and of itself is a loose adaptation of the 2006 novel, World War Z takes what you saw and places you in the shoes of twelve different protagonists. They each come with their own backstories told via motion comics after you play as them. While these comics do not add to the overall story of the game, it is nice to learn about who you play as so they are not some blank slate.

As you play as these characters, you pick one of six classes. Each of these classes are available from the start, sporting their own leveling systems along with unique equipment and roles on the team. While everyone is able to use every firearm, some also use weapons like molotovs, grenades, or stun guns. Medics can apply a percentage or what they heal on others to themselves and Fixers carry supply bags that supply explosive ammo for their teammates. Every class has a role in a team, and how those roles blend to pull off the perfect mission is up to you. 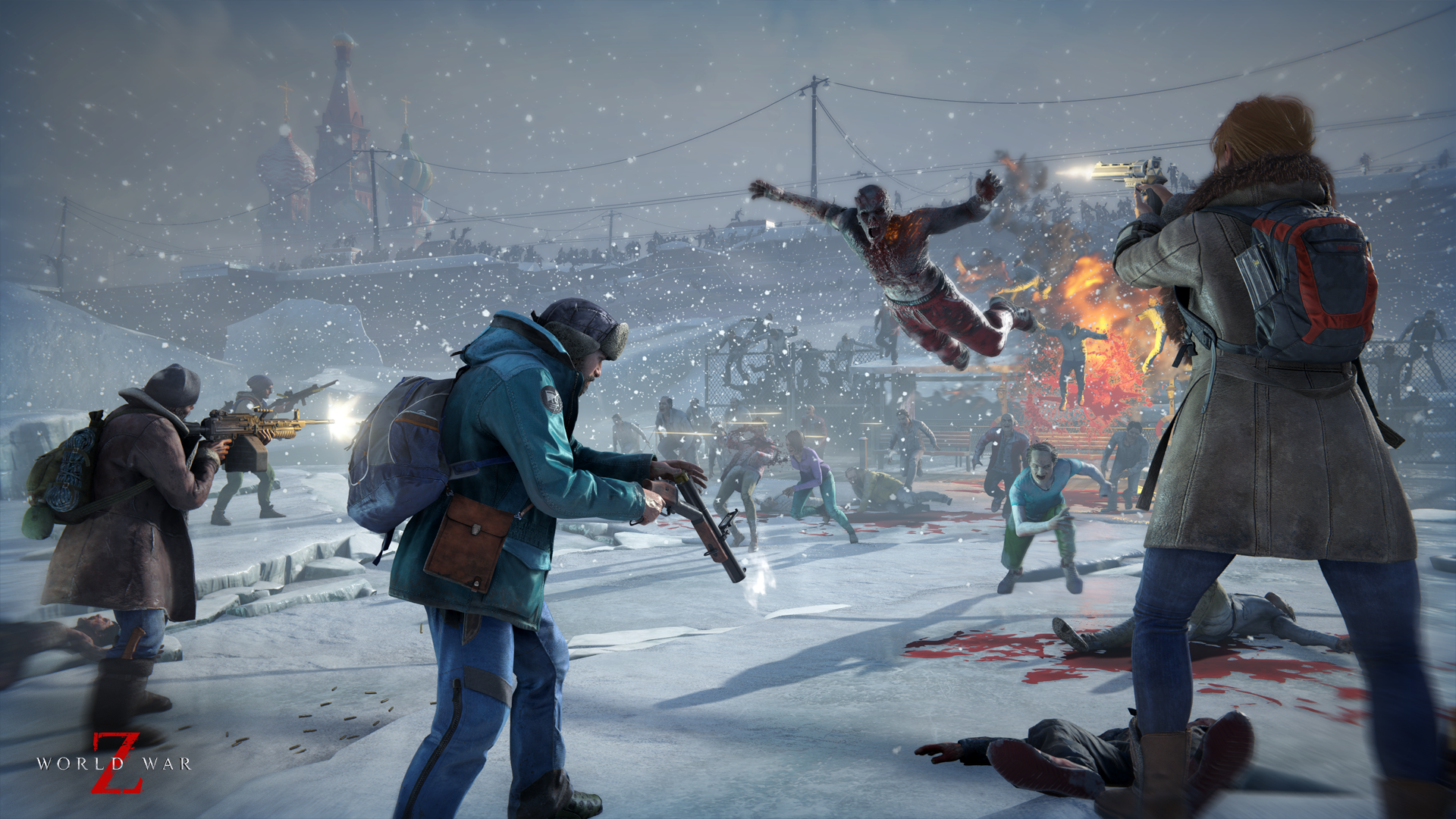 Each mission follows a pretty standard formula: clear area, fend off the swarm, proceed to clear area, and fetch items. While a lot feels samey, the weapons and defenses you can equip and set are different in each level. If you have breach charges equipped, you can open special doors containing even more defenses for you to utilize. So, if you have the right team, you can have an almost impregnable defense against the swarms.

Speaking of swarms, they do not just appear in your co-op story ventures; they aim to ruin your day in the aptly named PvPvZ Multiplayer as well. As every match gets more and more hectic, you will be warned about how much noise your carnage is causing. Soon after, zombies will swarm a sector of the map and trample all who are there. This can be a helpful tool to flush out the enemy team if they are camping a spot in Swarm Domination or King of the Hill, allowing your team to possibly earn the lead. These are not the only modes available, as there is also the standard team deathmatch, the hot potato-inspired Vaccine Hunt, and Hungry Hippos look-alike Scavenge Raid. 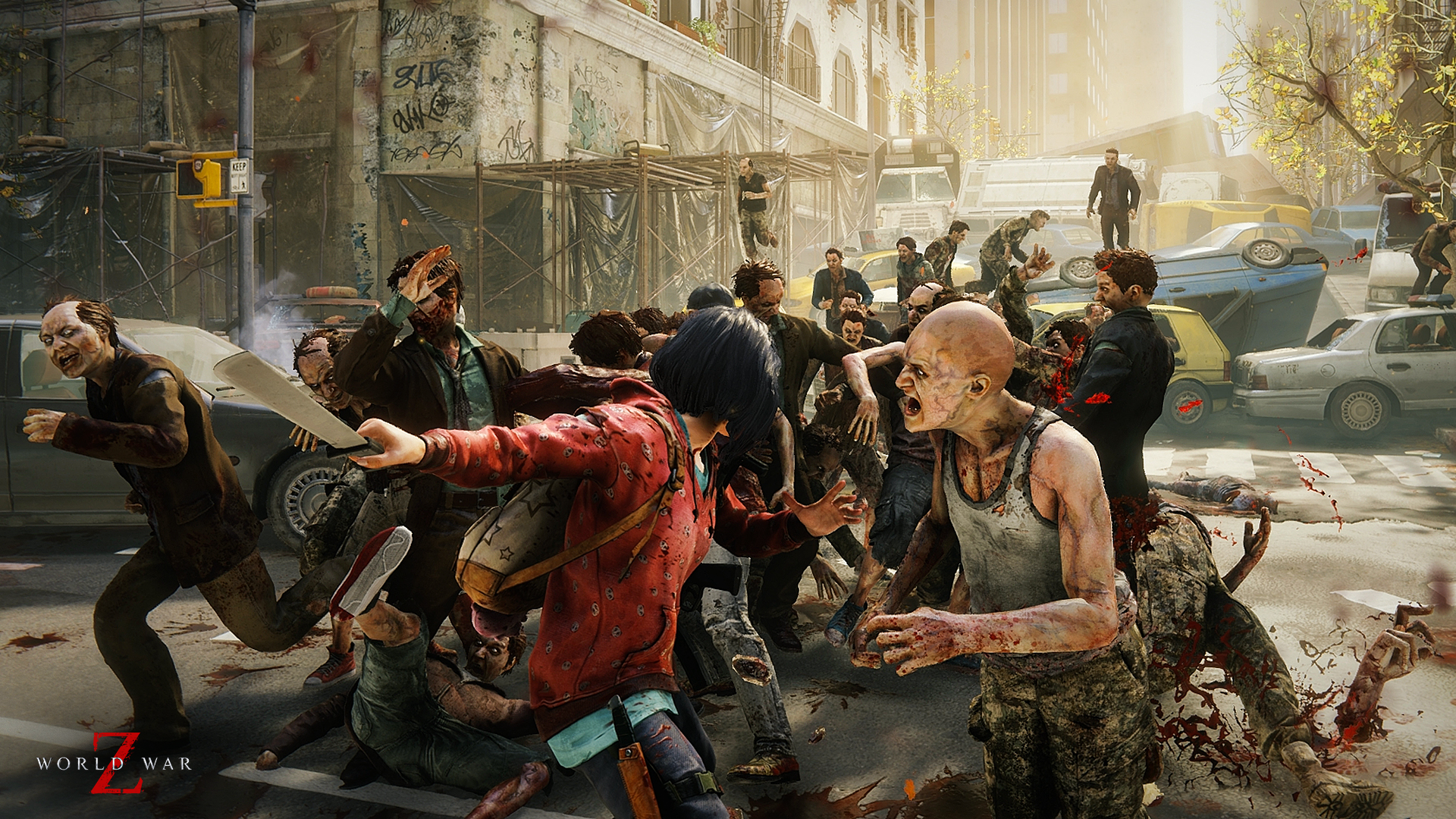 In PvP there are ten classes to choose from and progress does not carry to or from the campaign. You unlock skills at each level until you reach the cap at thirteen. All of the skills between each class are variations of each other, especially the last one unlocked. At level five, your primary weapon can be exchanged for something with more kick and your secondary gets the same treatment at level twelve. There are no custom classes, as everything is swapped out in your skills. So, while there is variance in what you can do, everyone will probably be running the same things as you. It is a shame that at the time of writing, there is no way to change weapons mid-match. 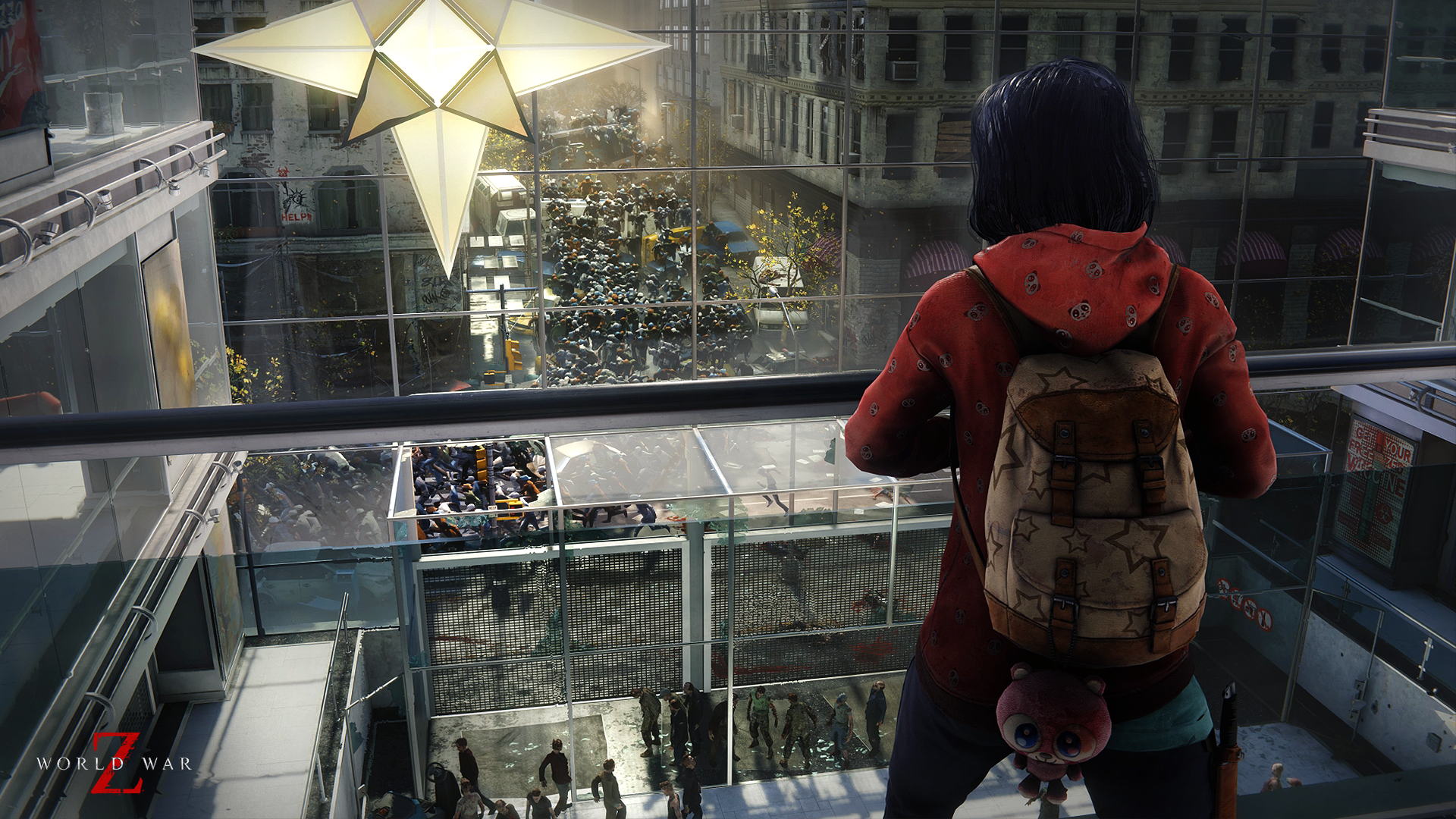 With the promise of more content, World War Z is shaping up to be the Left 4 Dead 3 experience gamers have been begging Valve for. If you dig shooting lots of zombies with friends, you better strike this iron while it is hot. Just not too loud, or the swarm will hear and that will not be good for you.

World War Z's impressive replayability elevates it, making this game one of the best in the zombie genre.