As with most games I play, aesthetics are what first drew me to World’s End Club. But you can’t judge a book by its cover, and this game exemplifies that principle. While it’s flawed on many levels, it’s got a certain heart and charm that I won’t soon forget. 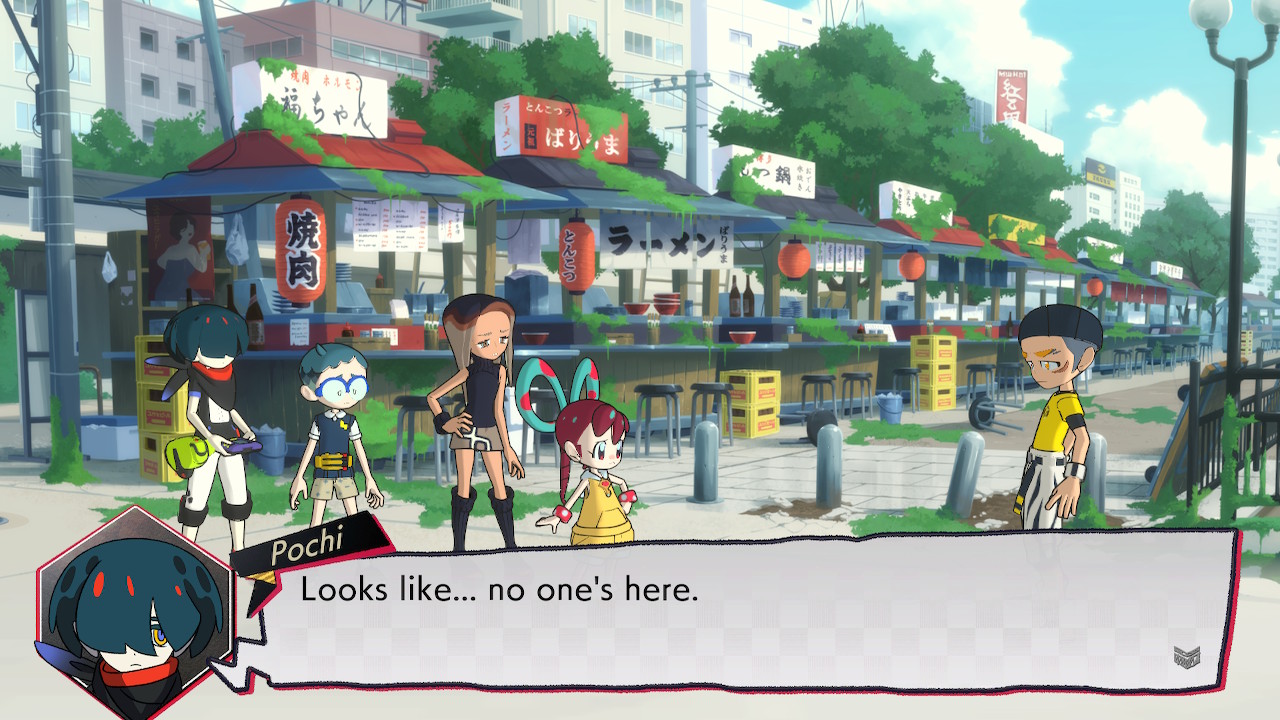 Spiritual Content: Without going into spoilers, ghosts and out-of-body experiences are prominent themes in this game. There’s a character who claims they have a “sixth sense” which allows them to see ghosts and auras. A significant portion of the game revolves around a cult that performs human sacrifices. The cult’s leader performs a hypnotizing, brainwashing chant. At one point, everyone visits and prays at the Great Buddha shrine in Nara.

Violence: There are a few references to gruesome deaths, including but not limited to getting hit by a truck, crashing in a helicopter, getting melted into sludge, and getting decapitated via guillotine. Mutilated and/or dismembered robots are occasionally shown. Aside from that, the most that’s ever shown on screen are bloodstains on surfaces or fake blood painted on surfaces for effect. Some characters are violent or threatening towards each other, but this rarely results in injury.

Sexual Content: There are a handful of sexual jokes and innuendos throughout the game, such as discussing the girth of a character’s baseball bat or expressing love for a device called “the weeniefier” which somewhat resembles a penis.

Language/Crude Humor: Language is mild to moderate, including dang, heck, crap, d*mn, h*ll, *ss, BS, and using God’s name in vain. One character’s awakened ability involves creating foot-powered bombs, which are nicknamed “f-bombs.” As mentioned above, there are a few sex jokes and innuendos. Numerous fat jokes are directed towards an overweight character. There’s also a fair amount of toilet humor.

Drug/Alcohol Use: While not explicitly drugs, there are special mushrooms that the characters cook and eat to undo brainwashing and heighten their perception.

Other Negative Themes: One character is overweight, and their personality revolves around being obsessed with food. Another character is a goody-two-shoes and they’re frequently ridiculed for this. This character’s awakened ability turns them into a rude anti-hero who “fights evil with evil.” Some characters, settings, and events are generally creepy. There are a few weird sexist statements along the lines of “you’re a girl, so [blank]” or “you’re a boy, so [blank].”

Positive Themes: While characters may temporarily disagree with or separate from each other, the Go-Getter’s Club always goes the extra mile to help a member. There are nice themes of friendship, helping each other in times of need, and forgiveness. There are also good messages about embracing and working through grief and sadness. Characters’ abilities awaken when they are willing to risk their lives for the safety of others.

In World’s End Club, you primarily play as Reycho, the unofficial leader of the Go-Getter’s Club. This club is made up of 11 other 12-year-olds who will stick together even if the world comes to an end. And it’s a good thing, too, since that’s exactly what happens on July 13th, 1995. A meteor strikes Tokyo, then you and your friends wake up inside an abandoned underwater theme park! If you manage to make it to the surface, you have a 1200km journey across Japan ahead of you! Are you and your friends up for the challenge?

This long trek home is filled with puzzles to solve, threats to defeat, mysteries to uncover, and decisions to make. As the story progresses, each member of the Go-Getter’s Club discovers their own mysterious powers, known as awakened abilities, which help you along the way. But it’s the decisions, in particular, that impact the fate of the group and, subsequently, how the game ends. Unfortunately, this is more of an illusion of choice than anything.

There are only two endings, one of which is the true ending. If you take the proper path, you can get that true ending on your first run. However, if you get the bad one, you can easily go back and take the paths you missed once you complete your first playthrough. While it’s nice that your choices have some small bearing on the story, this lukewarm approach is a bit dissatisfying. I wish that it either fully leaned into this idea with three or four endings or that it was purely linear with only one.

Regardless, the story will keep you on your toes. It’s full of twists and turns: some seemingly warranted, some simply nonsensical, and some genuinely intriguing and clever. I can’t delve much deeper without spoiling them, but I’ll say that the clever twists made me take the game as a whole a bit more seriously.

However, the nonsense ones often made me throw up my hands and laugh out loud. This brings me to what is, surprisingly, one of my favorite aspects of the game: its constant tonal whiplash. The characters are so one-dimensional that older audiences can’t fully connect with them, and some events feel ripped straight from a Saturday morning cartoon. However, other characters and events are extremely dark, to the point that they feel unsuitable for younger audiences.

For instance, half of the Go-Getters Club narrowly escapes a grisly death then, in the next scene, the whole club rides a 12-person tandem bicycle and sings their theme song. This is one of my favorite examples of this game’s tonal inconsistency, and it’s moments like these that make it wonderfully campy and almost so-bad-it’s-good.

I would say this game doesn’t know its audience, but its creative director worked on the Danganronpa series. So it’s unsurprising that they lean into a similar dark-yet-childish tone that’s oddly charming. I was glued to my screen, and I couldn’t help but become invested in these walking, talking stereotypes’ relationships and common goal of getting back home. I even found myself getting emotional over certain character interactions, something I did not at all expect after my experience during the first few hours.

But there’s a glaring barrier that lies between the player and this goofy story, and that’s the gameplay. The game is made up of small sections, which can either be “story,” “camp,” or “act.” Easily the “story” sections are my favorites since that’s where most of the major plot points occur. Occasionally this would happen in the “camp” sections, but those more so serve the purpose of getting to know each character better. These two section types are all well and good, it’s the “act” sections where my complaints lie.

They felt like chores I had to complete in exchange for more story, rather than refreshing changes of scenery. And while their platformer format sounds great on paper, they suffer from weird, slow controls and exceedingly simple puzzles. Although, this definitely contributes to the overall earnest charm of the game I mentioned earlier. For example, my friend watched me play for a while, and we would cry laughing every time I died due to the sluggish controls.

The hit-or-miss voice acting also added to the sincere feel. Sometimes the vocal performances were genuinely moving or intentionally hilarious, but sometimes they were awkwardly drawn out in a way that made me chuckle. Two aspects that were always spot on, however, were the art and music. The art style is lovely, it’s very reminiscent of Pokémon, and the music always excellently sets the mood.

All things considered, this is absolutely a new junk food, guilty-pleasure game for me. I know that the gameplay is lackluster at best, that the characters are one-dimensional, and that the story and tone are all over the place, but I can’t help but love it. I hope this develops into a series, as I’d love to revisit this wacky world in a new way.

A review copy was generously provided by NIS America

Despite being lackluster and downright flawed, I couldn't help but find World's End Club charming thanks to its sincerity and campiness.