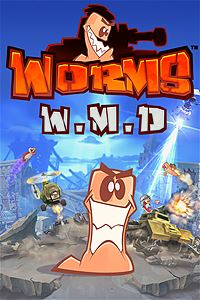 The Worms franchise has been known and loved by many since the mid 90s, with some great additions to the series and some that were less well-received than others. I have always been aware of the franchise’s existence, but my personal experience with a Worms game did not come until Open Warfare was released on the PSP back when Sony’s first portable gaming device was still hot. Open Warfare was like others in the series—a re-released version of Worms: Armageddon which came out on the Playstation, Nintendo 64, and Dreamcast. Regardless, I put dozens of hours into that game and fell in love with those silly little self-destructive earthworms. After over 20 additions to the series, Worms W.M.D. is a new entry that expands on the same classic formula and brings the franchise into today’s generation of gamers.

One of the strong-points of the series has always been the humor. Though it may be a bit crude it is actually quite lighthearted. When looking at the Worms games, it is best to think of them along the lines of classic cartoon such as Looney Tunes or Tom and Jerry. During battle the worms blurt out little comments and remarks, and the words “bastard” and “do*chebag” are the minor swear words that are in the game. The cartoon-like use of weapons such as bazookas, grenades, and other weapons nets the cartoon violence rating. When the worms die, they explode and a tombstone falls in their place shortly after. 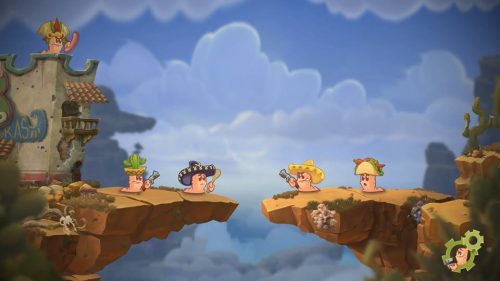 Let me start off by saying that a Worms game has never looked so good. The hand drawn art style fits right into today’s market along with other games that are as a piece of art as they are a video game. The landscape of the maps especially stuck out to me. One example of this are the crop circles I noticed in a field that was drawn on a hill that was generated for the battle. When it comes to the worms themselves, they are the same crazy battle-hungry little dudes they always have been, and are fluidly animated. Their personality really gets entertaining when you use a different voice set instead of the standard fare. Their little remarks and comebacks are littered with pop culture references—one of the voice types I chose was “budding streamer” which had them using lingo such as likes, follows, unboxing, and subscribing. Another time I noticed this was when a viewer mentioned that the worms were spitting out Bob Ross quotes during one of my Sunday sessions on our Twitch channel. 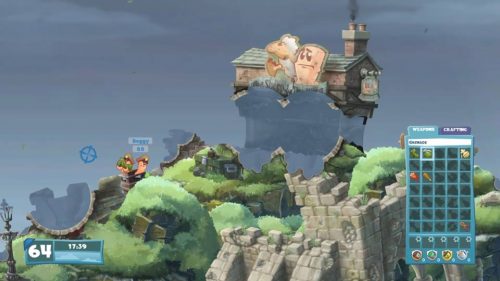 You can hide in buildings, this one didn’t last long enough for me to utilize the space

As for features new to the franchise, one of my favorites is the addition of vehicles. They can turn the tide of battle or be a danger to your unit if it explodes while one of your worms is in it. The tank and mech are both great, but I personally enjoyed using the helicopter. It is wild to control, but I got the most out of it when I’d spray ammunition at the enemies below me to clear them out. I found that the tank works much like the bazooka except that it is heavier artillery. The mech is good for travel and has a ground slam attack that works great when you want to break through the environment rather than having you use your jetpack or ninja rope to get over the landscape. In addition to the vehicles, there are mounted guns which are a machine gun and sniper rifle, both very useful in turning the tide of battle.

Another new addition is the crafting system, a mechanic that every developer almost feels obligated to include in their game these days. Boxes are always being dropped into the battlefield that include different material in order for you to craft new weapons while waiting for your turn. Half of what I am doing in these games is keeping track of my units and where they land as the enemy makes their turn, so this system is something I feel like I don’t have much time for. The upgraded weapons are great, but I hardly ever used the crafting system. What we have here is a neat addition, yet it is ultimately an option and not necessary during battle. 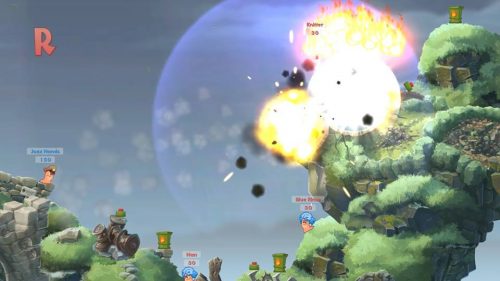 The weapons do make some big and pretty explosions

W.M.D does have a campaign mode but is without a story. This is not bad news considering this franchise has never really needed one. The campaign mode contains a large number of missions, but should be seen as challenges more than anything. Inside each mission is a series of objectives that will have you doing some cool things with all the weapons and also teach you different tricks that you can later utilize in other battles. Within a handful of missions you will find wanted posters; when grabbing these, a new challenge will become available. You will be facing a new team and if you defeat them you can unlock the new content that they have such as the unique head wear they are sporting. 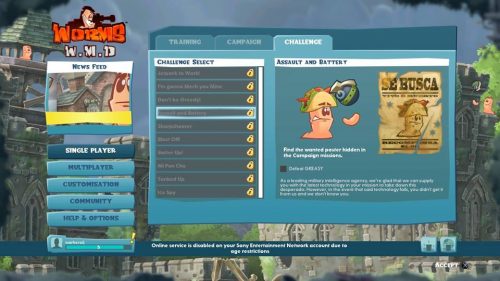 Looks like someone is a big fan of Taco Tuesday

This franchise would be nothing without multiplayer options. In this category, there is something for everyone. If you are someone like me who likes to run skirmishes against the AI,  that option is available. Local multiplayer is available if you got a friend or relative that wants to get in on the action. In the online multiplayer section you have unranked for the casual and ranked for those who are competitive and serious about their gaming.

Some might consider thirty dollars to be steep for something like this, but lets not forget that Worms has been around for a long time, and up against some other big titles in gaming. What I have found in the package is worth every penny for fans of the series and newcomers as well. I was intrigued by this new addition to the Worms franchise and thankful for the opportunity to review it. When I got started on the game I began to remember the great victories and epic fails that made me a Worms fan. With W.M.D. I found more great victories and more epic fails, some of which can be found on our Twitch channel.

Worms W.M.D. is everything we love about the franchise updated to today's standards with a few awesome new features.