WRC continues to be the choice game in the world of Rally Racing and off-road simulation, and thus has already been deemed as the official game of the FIA World Rally Championship for the 2020 season.

Last year’s title of WRC 8 was a huge overhaul and improvement of its predecessor, the aptly named WRC 7. However, with less than a year between releases, are we able to say the same about WRC 9?

You can crash your car in-game (possibly leading to you erupting in rage and punch your television in real life). 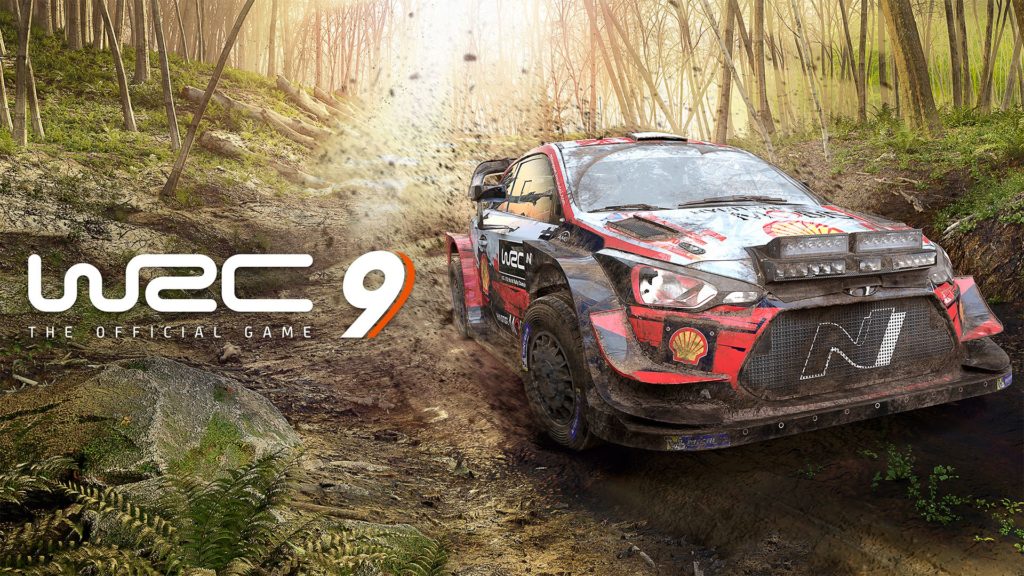 A brief introduction to the World Rally Championship

World Rally Championship (WRC) is a series of on-road/off-road rally races recognized by the Fédération Internationale de l’Automobile (FIA) that take place throughout various countries such as Sweden, Monaco, Turkey and Mexico.

Each rally event takes place over the course of three days. Each day, drivers run through a series of special stages (SS) which can take place on various surfaces such as sand, tarmac, gravel and snow. These races are point-to-point and drivers compete for the best time. Assisting the driver is a co-driver in the passenger seat. The co-driver is responsible for warning the driver of upcoming turns, jumps and hazards by dictating what are called “pacenotes” to the driver directly.

These “pacenotes” tell you a variety of things about to happen. You’ll be given the direction of the turn, the intensity of the turn, how long it is and any obstacle warning. Being that you’re in a race car, the co-driver will have to provide all that information in as little time as possible. Good pacenotes are key for a successful rally because they help you prepare for what lies ahead. 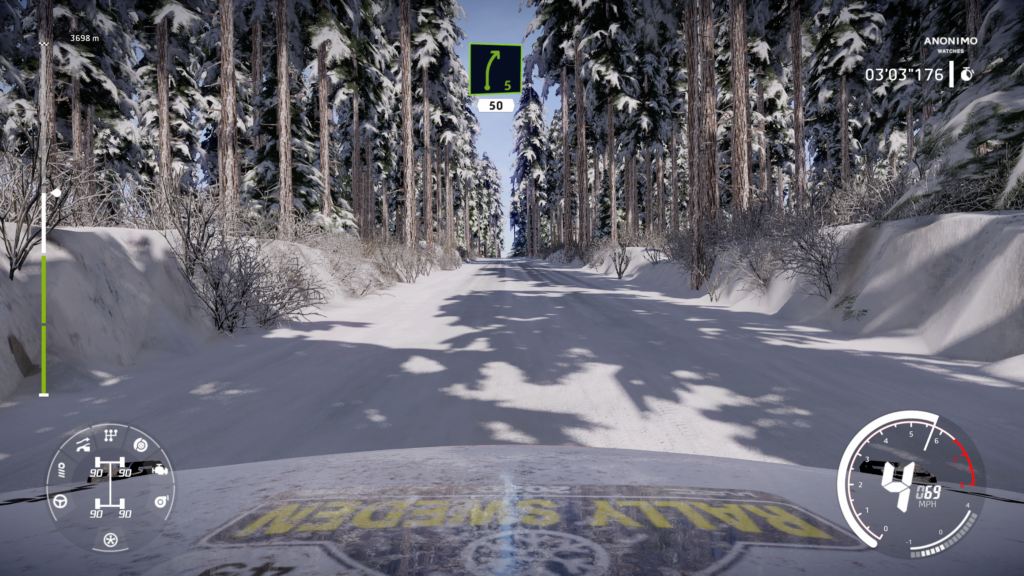 In this example, the co-driver would say “Right 5, 50.” This indicates that I have a right turn that isn’t too intense so I don’t have to slow down too much. The 50 tells me that the turn is coming up in 50 meters.

When I first started up WRC 9 to review for this site, I suddenly thought to myself “Wait just a dang minute here, didn’t I just do this?” The answer to that question is yes, yes I did. Less than a year ago I had  booted up WRC 8 for the first time for a rally racing experience unlike any I had experience before. With WRC 9, I got the same feeling, but better.

WRC 9 rosters a variety of cars in the game: 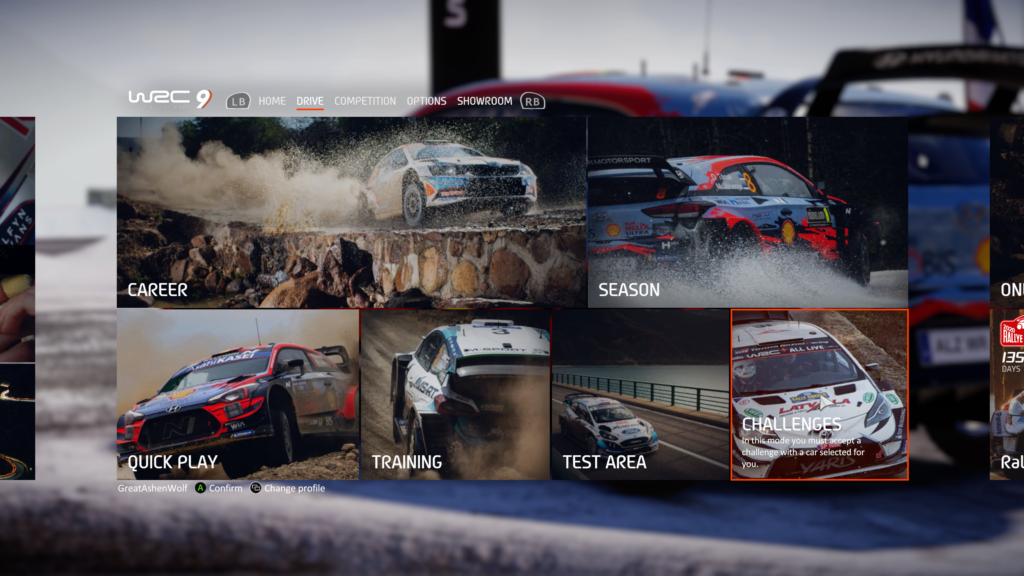 Career mode here is basically just like any other racing game. You can choose to start in the regular WRC or elect to take part in the Junior league. Starting in the Junior league, you are expected to make your way up the ranks by completing various events such as Rally races, historical rally races, Extreme weather events and manufacturer challenges.

Where WRC 9 differs from other racing games is it has an almost RPG-esque improvement system. Upon completion of events, you gain R&D points to help improve various aspects of you and your team.

Team:  Team points are for manufacturer based upgrades and bonuses.

Crew:  These will improve your office and gain crew and morale bonuses.

Performance: Simply for improving your car

Reliability: Improves the wear rate and durability of your vehicle. 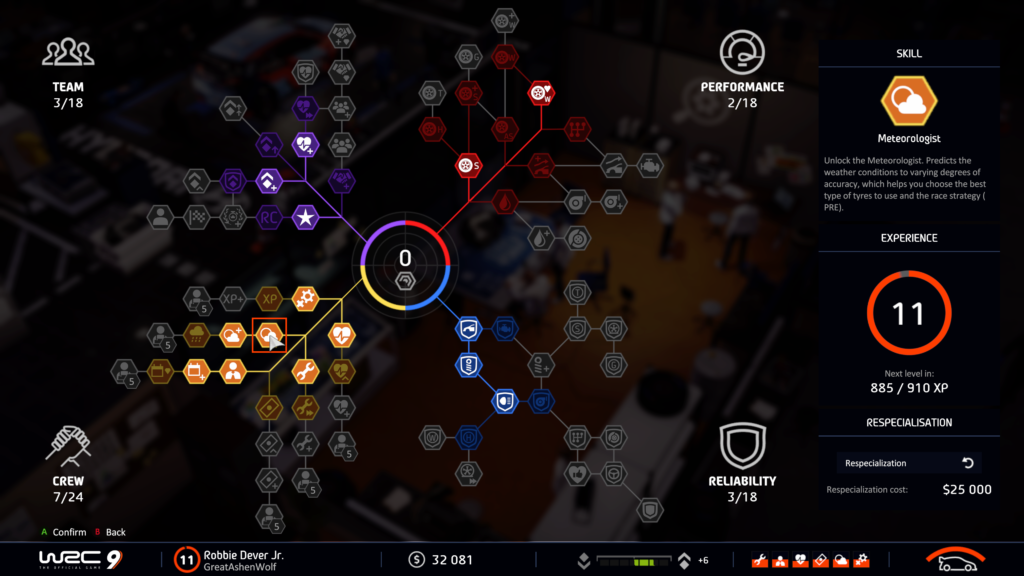 On top of gaining R&D points, you also have to manage your crew. Your crew is the backbone to your career because without them, you’d have to do everything yourself! This is all done via a card-like system where each crewmember has a specific job and skill level. You are able to trade lower level crew cards for higher levels but be careful because you’ll end up paying them  more after every race!

Also, your crew gets tired and becomes ineffective. To remedy this, you’ll need to give them time off by putting them into the reserve, but make sure you have a replacement! 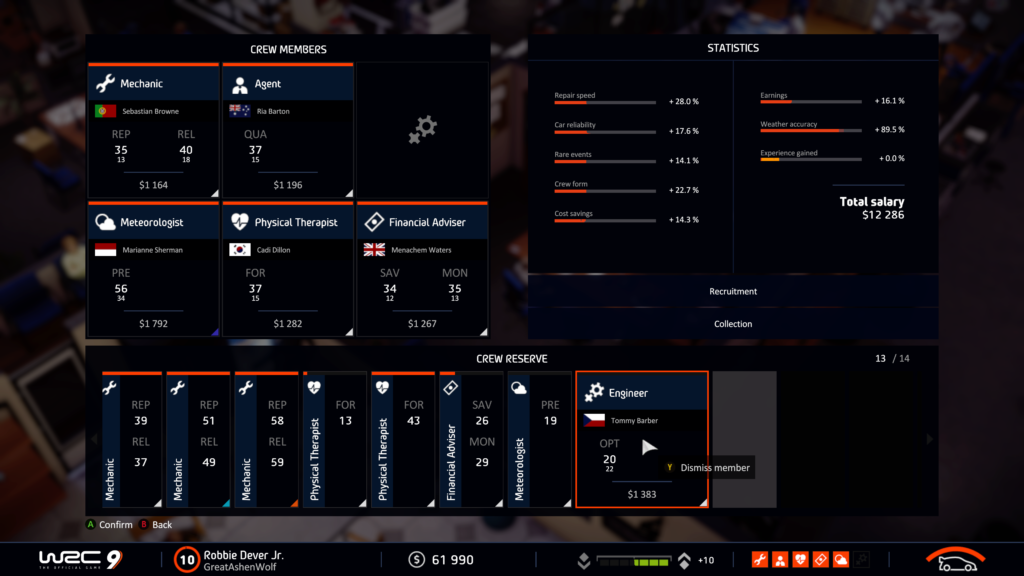 Now, how is it you earn all this money and R&D points? Through racing of course! This is where the bulk of the game comes in (obviously).

Rally: Perform a normal rally event weekend. You will start the first day by racing at two different stages. After the first two stages are complete, you’ll have the option to repair you rally car. Keep in mind that there are strict time constraints (this is where a good mechanic will come in handy!) After you’ve decided which repairs to make, you’ll move on to another set of two stages to end the weekend. If you’re the driver who completed the weekend in the least amount of time, you win the rally! 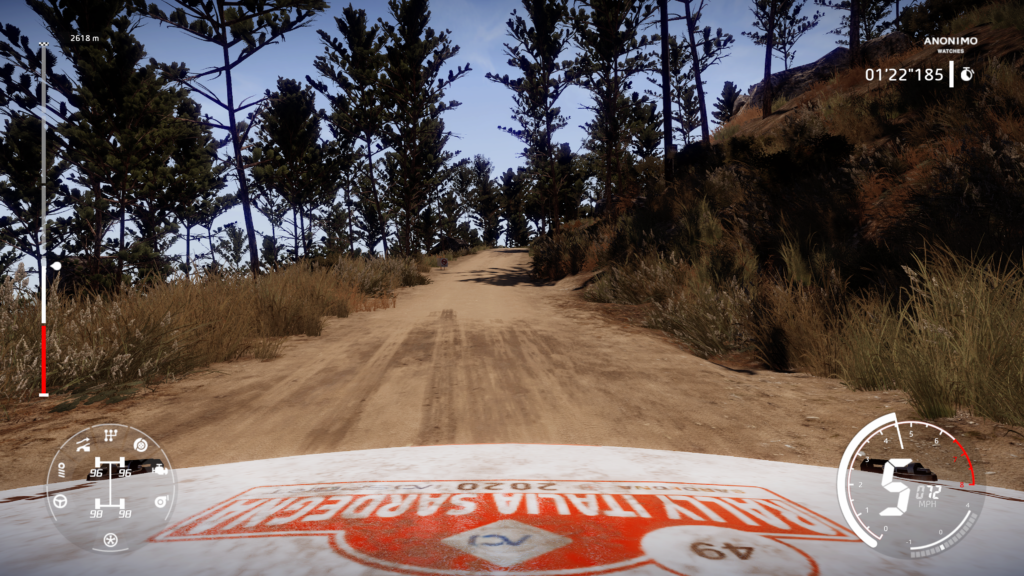 Not gonna win being in the red!

Training: Hone your skills and compete for the best medal!

Extreme Weather: Drive a damaged car through extreme conditions. Complete the distance within the allotted time to win! 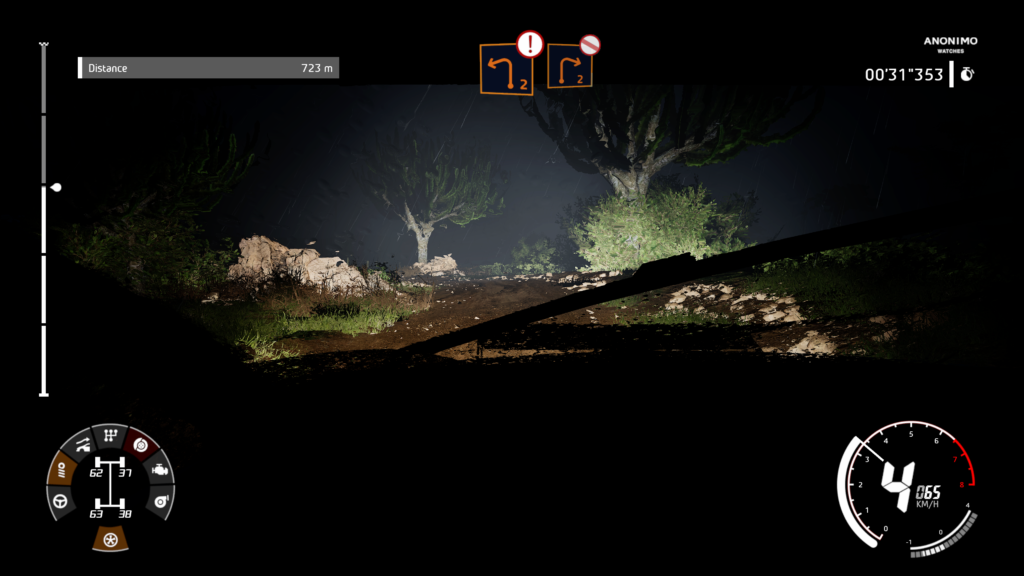 These are my favorite!

Perform enough of these events and ditch that Ford Fiesta for a Hyundai i20 in the big leagues! Well, you don’t NEED to pick the Hyundai i20 but you SHOULD.

Play in custom rallies against other racers across the globe.

There are a couple new features added in this year’s entry including Clubs. Clubs is where you can go to compete in other player-created championships, or you can make your own! This mode was created to be used in eSports in the near future and other types of online leagues.

Don’t have any friends who have the game? No problem! Sit them right next to you on the couch and play split-screen in true 90’s fashion!

Compete in numerous events presented by WRC 9. These events change daily and weekly. 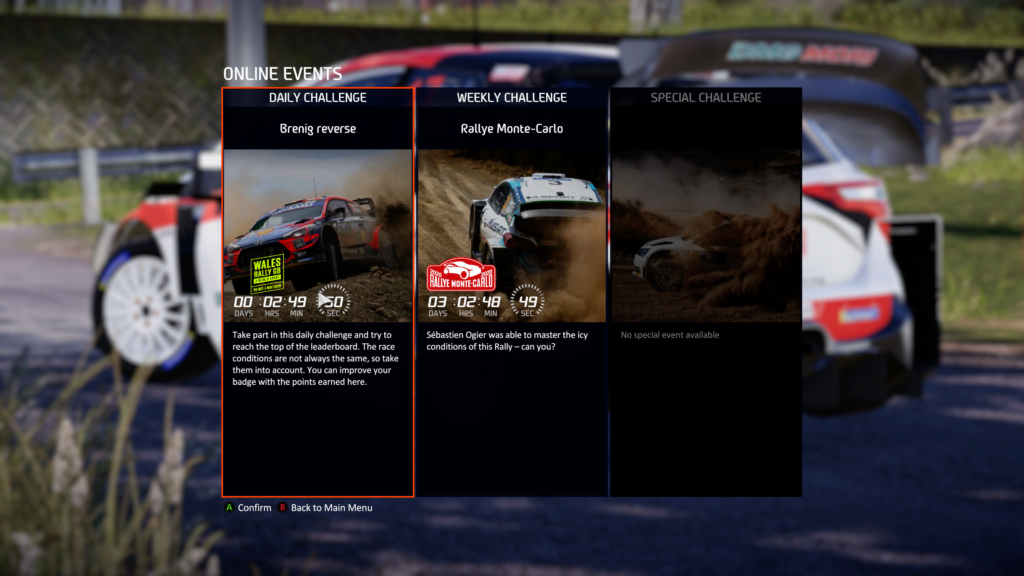 Customize your own rally season and compete for the championship!

Perform through a various number of training tasks and race for the best time.

Take on specific objectives in a car supplied to you. 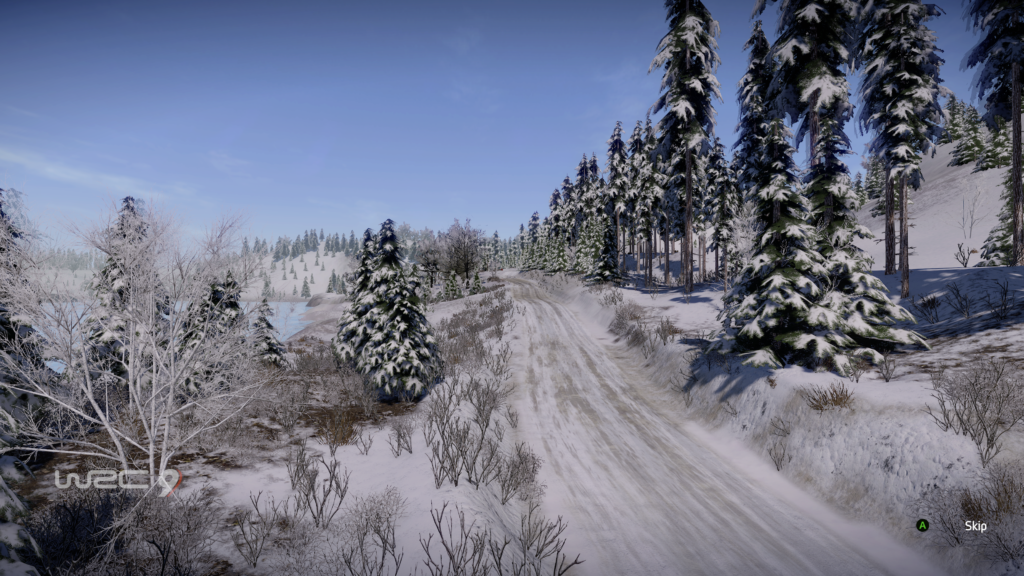 Rally games to me are very very intimidating. The long tracks full of difficult turns and hazards, make every simple mistake costly. This game doesn’t have a rewind button so it makes every maneuver you make that much more important. KT did well in limiting frustrations with cars that I find handle very well given the track conditions, though in snow or gravel, cars won’t be as easy to handle. However, there are times where I feel the physics of the game may need a bit of tweaking. Where I have thought I’ve only barely scraped a wall or ran over a small rock, my car would either dramatically  flip over or turn 90 degrees. As stated before, there is no rewind button so if something happens that you think should not have, it makes it that much more frustrating to start over. 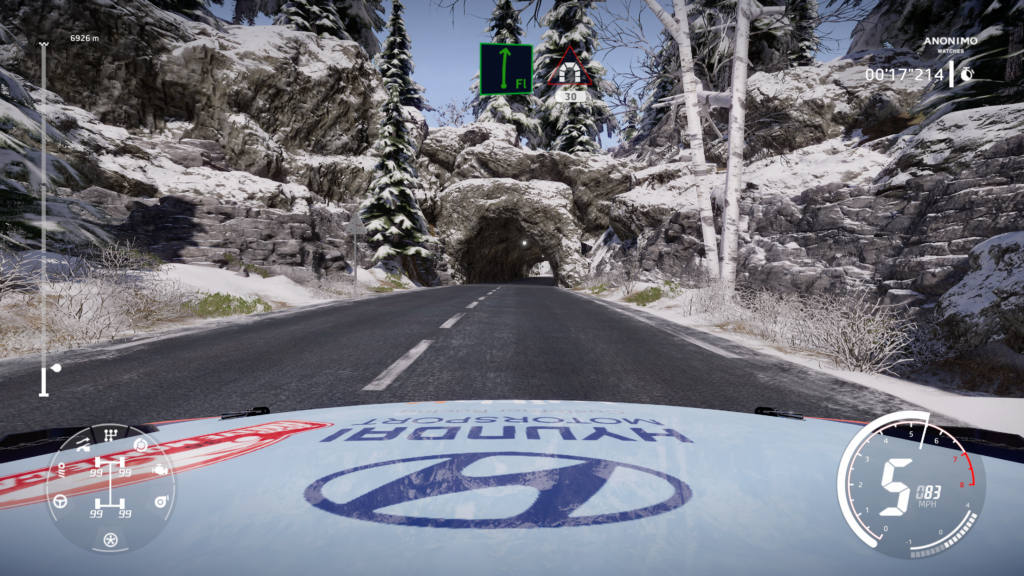 WRC 9 does help you with some assists like traction control, anti-lock breaks and a launch assist (Thank you lord Jesus for that, you don’t know how many times I got penalized for jumping the start) but after tinkering with the traction and ABS I personally didn’t feel much of a difference. I still struggled a bit through the snow/tarmac tracks the same.

However, I found the dramatic car physics and may-or-may-not-be-working assists to be small qualms, for neither one effected my time with the game that much. I still had a lot of fun being able to race through the forests and take hairpins like a true champion. KT fantastically capturedthe intensity of rally racing while still being able to have fun.

It’d still be nice if they added a dang rewind button!

One thing KT mentions about this game is that the sound, particularly the engine sounds have been redone and may I say the cars sound excellent. The co-driver’s notes are clear and concise and all the other ambiance is also well done.

The graphics is where WRC 9 shines and doesn’t shine at the same time. The cars look top-notch and the visuals of the tracks and the surroundings do also. But then you get a glimpse of the character models and they look like something out of a 2005 PS2 game. 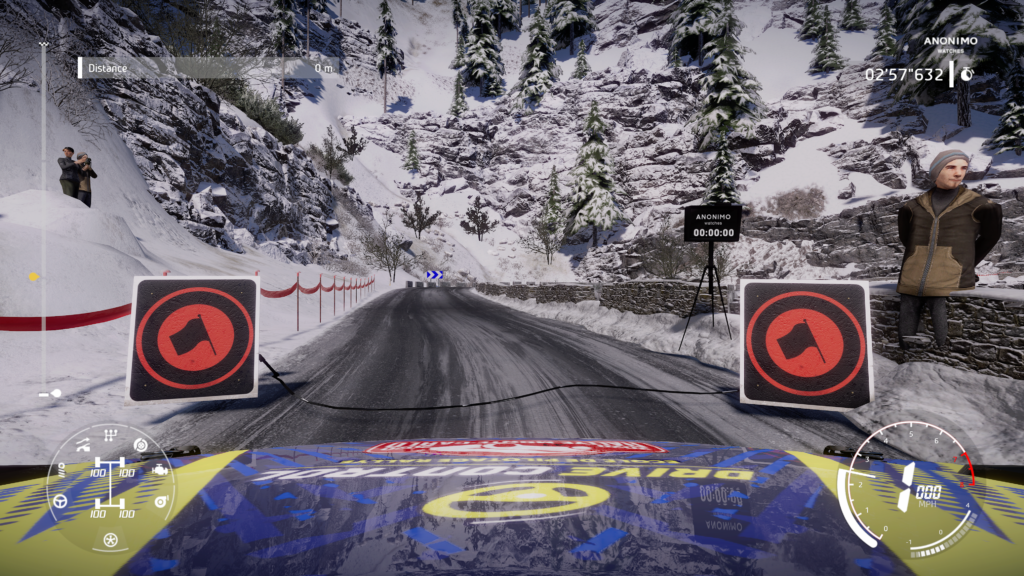 KT Racing isn’t a large company like Dirt Rally‘s Codemasters, so there wasn’t a lot of budget to go around. They spent more time on the important things like the cars and tracks which is fine. Still, I can’t stop myself from looking over in the stands and thinking I’m still in high school playing on a wired controller on my CRT TV.

This game crept up on me fast because it felt as if I had just reviewed the earlier title not too long ago, but annual releases of games (particularly in sports) isn’t anything new.  WRC 9‘s shortcomings have barely any effect on the overall experience. I will admit on the basis it looked more or less the same but once I got into it there was definitely a better feel to it add in  a few extra features including additional tracks, locations and game features, this year’s title is one worth getting.

WRC 10 and 11 are expected to release in the next couple years developed by KT Racing. However, in 2023, Codemasters (The people who make the DIRT series and Formula 1) will be taking over the official WRC license. Please in the meantime support these small development teams; they do such a great job with their passion for gaming and racing 😀 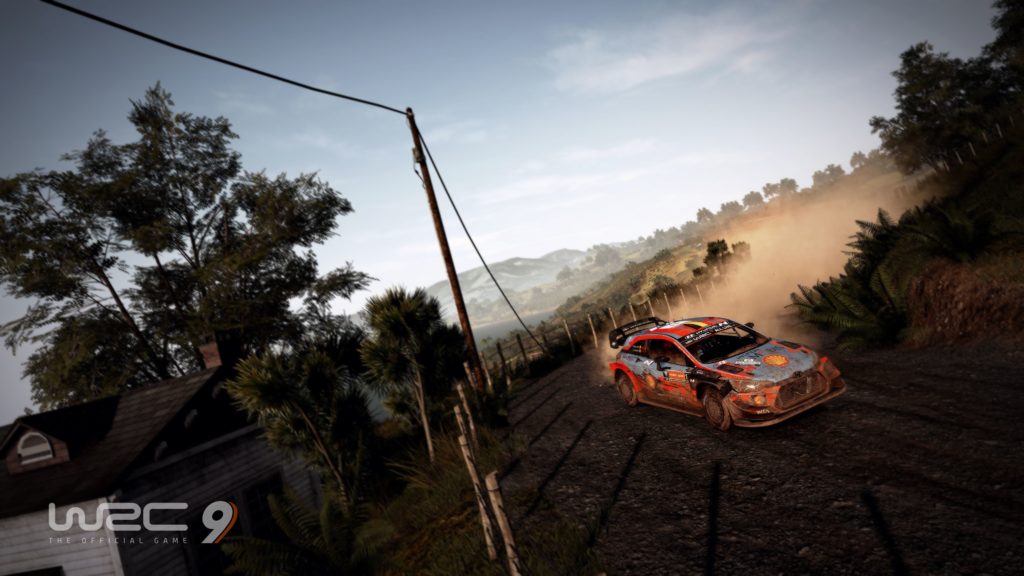 If you are a rally racing fan or even just a racing fan, WRC 9 is a definitive rally experience that deserves a spot in your library.