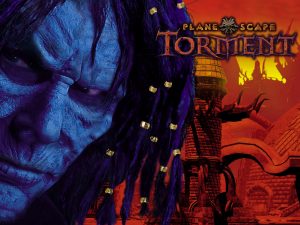 I have played Rogue Legacy in the past year, which is a roguelike with platformer tendencies, but I cannot remember the last time I have played a pure platformer since Donkey Kong Country Tropical Freeze (though our readers might have since played the Ratchet & Clank reboot). Playtonic Games has taken note of the dearth within the genre, and seek to remedy this discrepancy, and it appears that the gaming community is in agreement with their mission. 73,206 backers pledged £2,090,104 (or $2,610,748.91 USD) out of the of £175,000 goal to ensure that “the creative talent behind Banjo-Kazooie and Donkey Kong Country” would be able to create the spiritual successor of these beloved franchises. The question is, does their creative vision, Yooka-Laylee provide more than a flash-in-the-pan of nostalgia?

I suppose I should disclose for fans that I have never played the Banjo games. However, I have played DK exhaustively. Thus, that is my “frame of reference.” 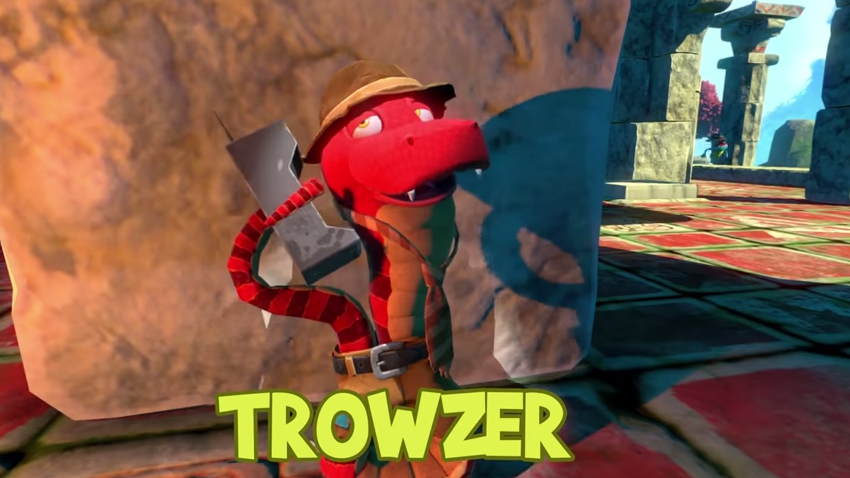 With the exception of the above photo, I searched and searched but could not find anything in Yooka-Laylee that could be considered offensive in any context. This game is as innocent as they come. All humor is childlike, including a little “toilet humor” such as an unnamed, unseen character who refuses to vacate their port-a-potty due to poor plumbing (that Yooka-Laylee are asked to fix). 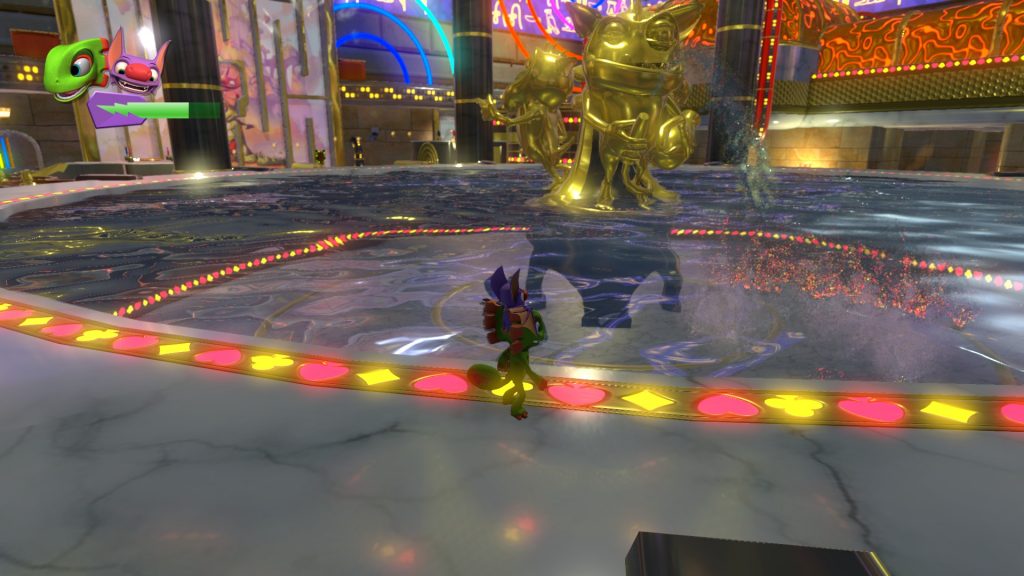 I suppose the ultra-reactionary might find this offensive. My children, ages 8-11, asked me why I took this screenshot. I would advise parents not to make a mountain out of a molehill. 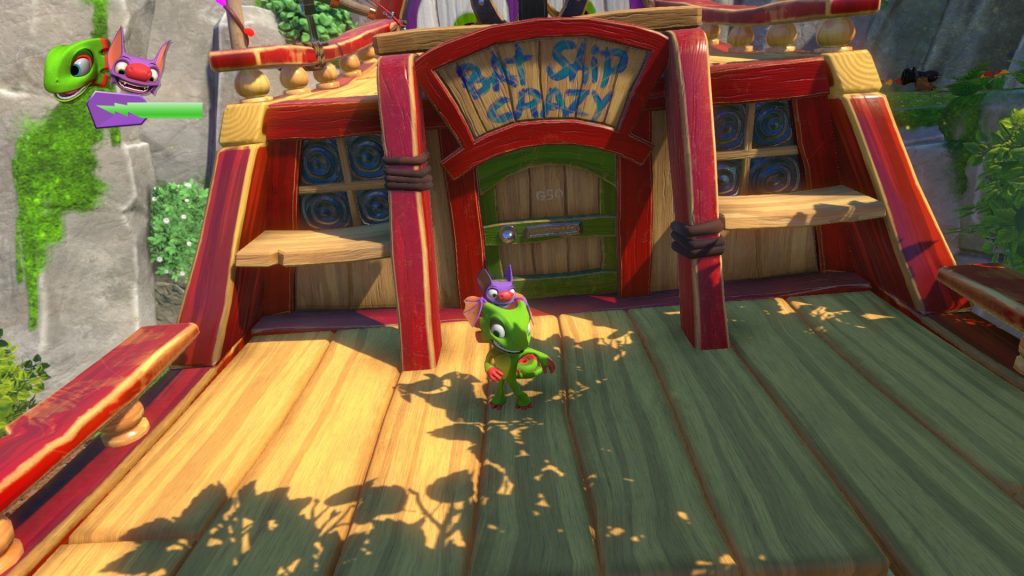 Yooka the Chameleon (the game never specifies) and Laylee the Bat are casually lounging around their hangout when latter’s book flies off into the atmosphere. The duo gives chase, leading them to Hivory Towers where Capital B(ee) runs a company in the business of world domination like every other bad dude in media designed for all audiences. In the tradition of the platformer, Yooka-Laylee is prosaic in its story. To my surprise however, its strength lies in the writing its cartoonish characterization. 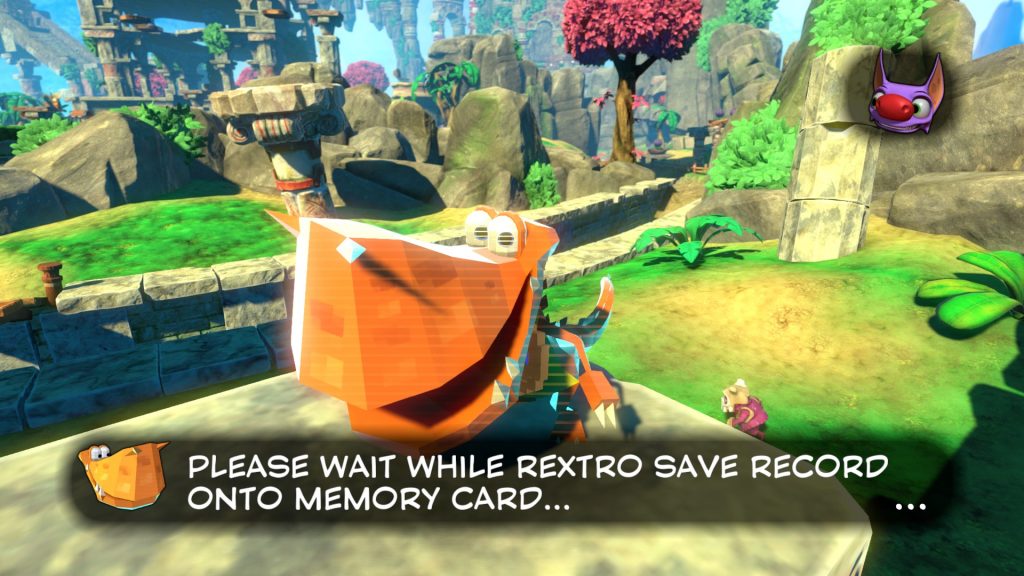 My favorite character because he symbolizes a the good ol’ days for me. Young whippersnappers don’t know nothin’ about a $30 peripheral that held only 1 MB of storage data that was REQUIRED to beat games like FF7. That equated to 15 blocks, or 15 games. Some audacious games dared to take up TWO blocks for one save!

Yooka himself is level-headed, but Laylee is the wisecracking trickster. Together, they outwit Trowzer the Snake on his hustles—a character sporting an 80’s style portable phone who is too busy to look his customers in the eye (Get it? Snake oil salesman? As for his name, ask your parents about that inside joke). Rextro, the retro dinosaur, curates an arcade, and he himself brims with archaisms such as tokens and memory cards. Dr. Puzz, who is an octopus, operates the D.N.Ray, a machine that looks like an alien weapon from Fallout that mutates Yooka-Laylee into a level-appropriate contraption that will aid them in the acquisition of items that their normal form and abilities could not. 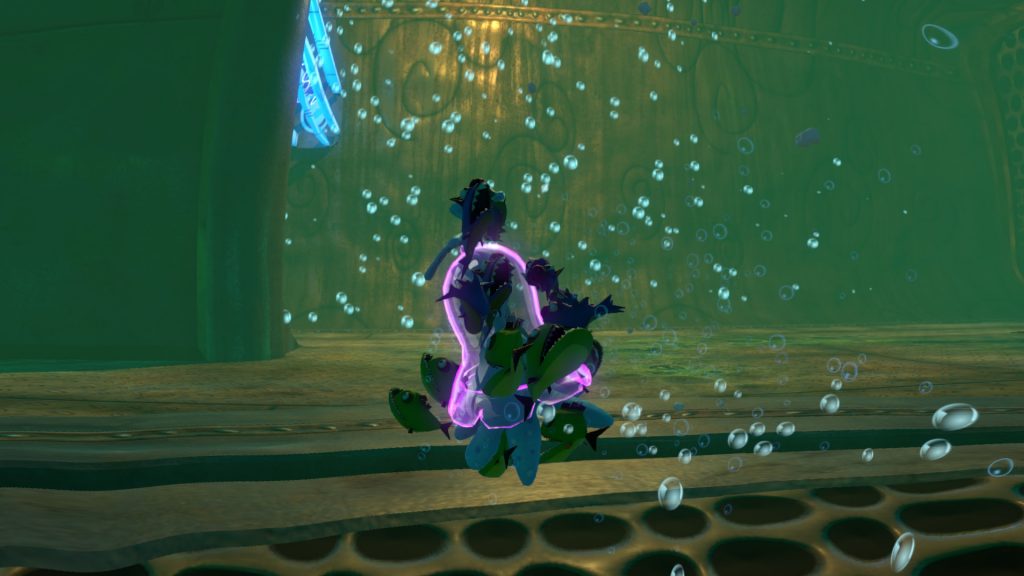 The school of piranha is my favorite transformation even though it is used the least. Chow down, y’all!

Yooka-Laylee‘s claim to fame is that it is an open-world platformer. It suffers the misfortune of releasing after The Legend of Zelda: Breath of the Wild, a game whose take on the “open world” buzzword allows for players to go anywhere and do anything in its first two hours, including rolling right up in the end boss’ crib. That established, I think of Yooka-Laylee as a game that  is not open world, but rather, facilitates non-linear progression. Its formula is this: Trowzer the Snake (*snickers*) in the hub world unlocks a free ability that oftentimes—as I feel with the Rayman Origins method—should have been always already unlocked, such as double-jumping (gamers may also have flashbacks of Metroid: Other M, where Samus “needs permission” to use abilities she already has). Nevertheless, after every world, Trowzer will give for free an ability that is ideal for the next world Yooka-Laylee will encounter. Without finding Trowser again within that new world to purchase another ability with quills that can be found in that area (he updates his inventory in every new location), players will be unable to access the next world within the Hivory Towers hub. Combined with a minimum requirement of “pagies,” or pages from Laylee’s stolen book, to unlock and expand worlds, these design choices ensure that players cannot “skip” worlds, and must play each while accomplishing a minimum number of goals. 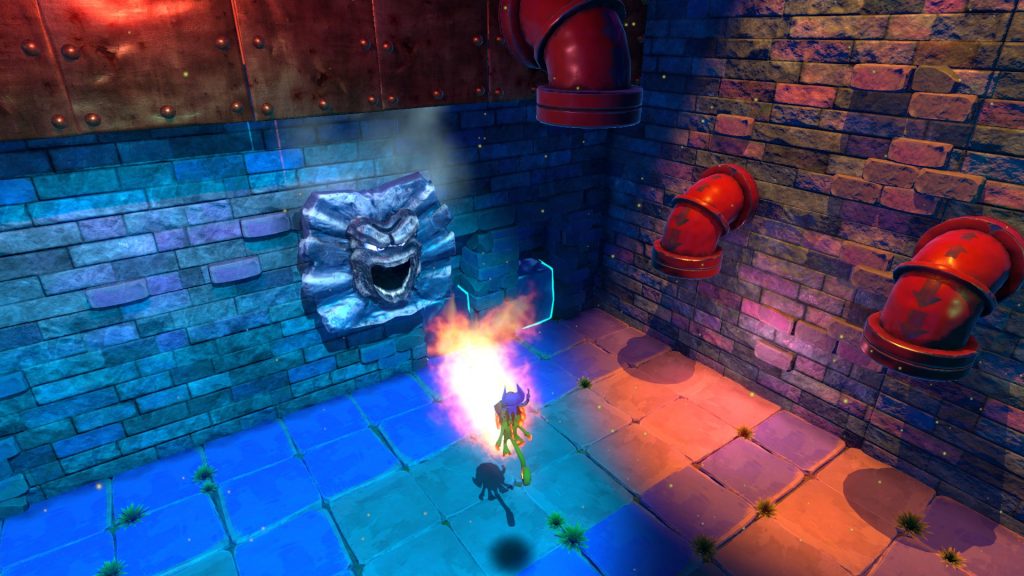 All five of the worlds, Moodymaze Marsh, Galleon Galaxy, Tribalstack Tropics, Glitterglaze Glacier, Capital Casino, and the hub, Hivory Towers, includes a boss, but only the boss of Hivory, Capital B, must be defeated to beat the game. It is possible to never fight a boss except for him.

Now, by “non-linear progression,” I mean that once gamers have purchased the essential upgrade (such as a super jump or a protective shield) and possess the minimum number of pagies, they can move on to find the next world in the hub, or simply expand already-existing worlds. Think of expanding worlds like this: imagine world 1-1 in New Super Mario Bros Wii U as one massive continuous stage rather than seven individual stages. Though there are some parts of worlds that are “hidden” behind small loading screens, these loading times are minimal, and do not break up the pacing of exploring these large environments. 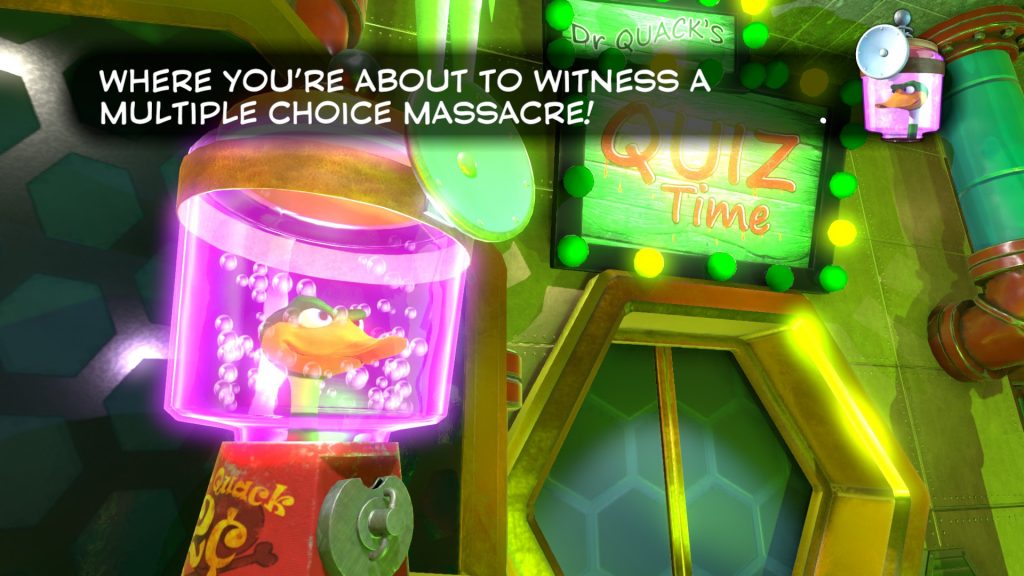 Along with upgrades that can be purchased from Trowzer, players can toggle tonics with a character named Vendi, which are passive skills that cater to a player’s individual preferences and playstyles. I enjoyed the bruiser tonic, which makes consumed butterflies count for two health points rather than one. Butterflies touched rather than eaten by tongue restore energy for Laylee’s abilities such as using Yooka as a rolling ball (think Diddy Kong balancing on Konkey Kong) or echolocation. Plants with water, ice, or fire flowers can be consumed so that Yooka can be temporarily granted the ability to use these elements as projectiles, overriding the basic spin attack. All of these serve the purpose of of collecting more pagies and quills—the game’s currency. 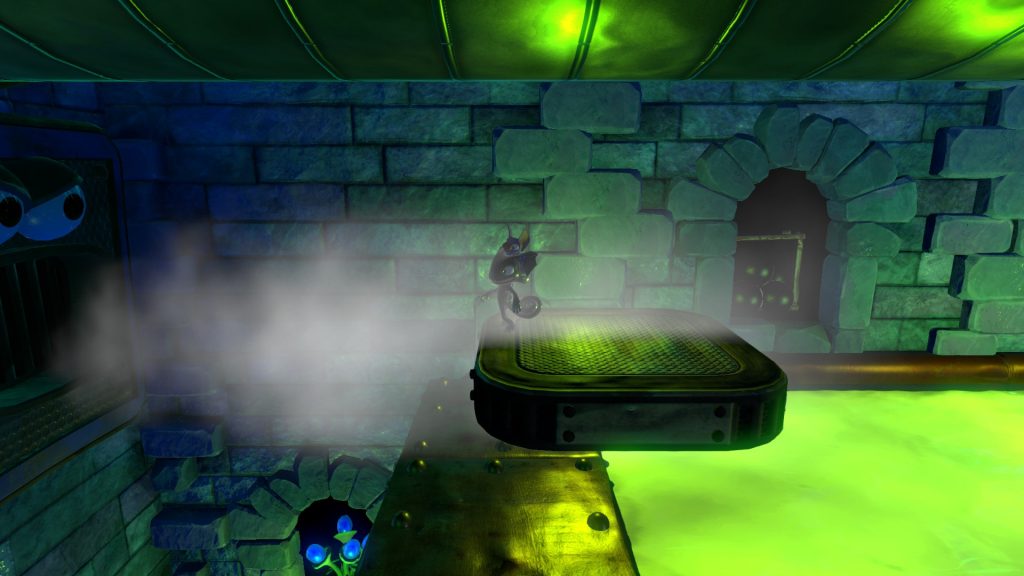 In this screenshot, Yooka has eaten and therefore, adapted the element of weight from the cannonballs, preventing him from being blown away by the vent. I will have to consume the water plant on my way down before encountering some other puzzle, such as the platform being set on fire. Take note at the lighting as well.

CG is popular for cartoons these days, so when I say that Yooka-Laylee looks like one, my aim is to flatter rather than denigrate. Though I have heard rumors of the game’s performance being questionable on other platforms (as always YMMV), I experienced nothing but 60 FPS, HD perfection—tight controls and few camera issues. On that note, the camera did forget to shift once I exited a sub-level, and I died off screen, but Yooka-Laylee is arguably too merciful, and I simply restarted from the last point that I suffered a scene-loading, and everything was back to normal. No (real) harm, no foul. 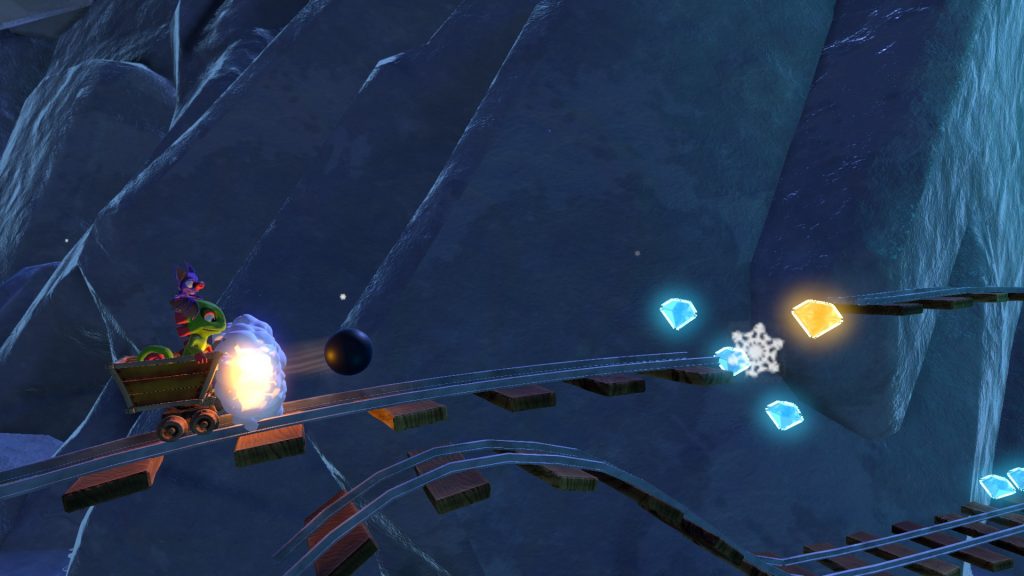 If this screenshot does not hit readers right in the nostalgia, I have failed.

The real criticisms of Yooka-Laylee lie in the sound department. David Wise orchestrated what I believe to be the best OST in the past generation with the aforementioned DKC:TF. I regularly listen to some of his pieces on my YouTube playlist. Here, however, I cannot think of one memorable song, and I am much reminded of Epic Mickey where the music is appropriate, yet will not be memorable even next week. Disappointed is an understatement, yet that is better than annoyed, which is how I feel concerning the “voice acting.” I realize that Playtonic Games was aiming for something ridiculous and jocund, but hearing Trowzer’s mobster-style “nyah nyahs” or Dr. Puzz’s high-pitched “glug glugs” will have most searching for the mute button, or the option to turn off that racket. 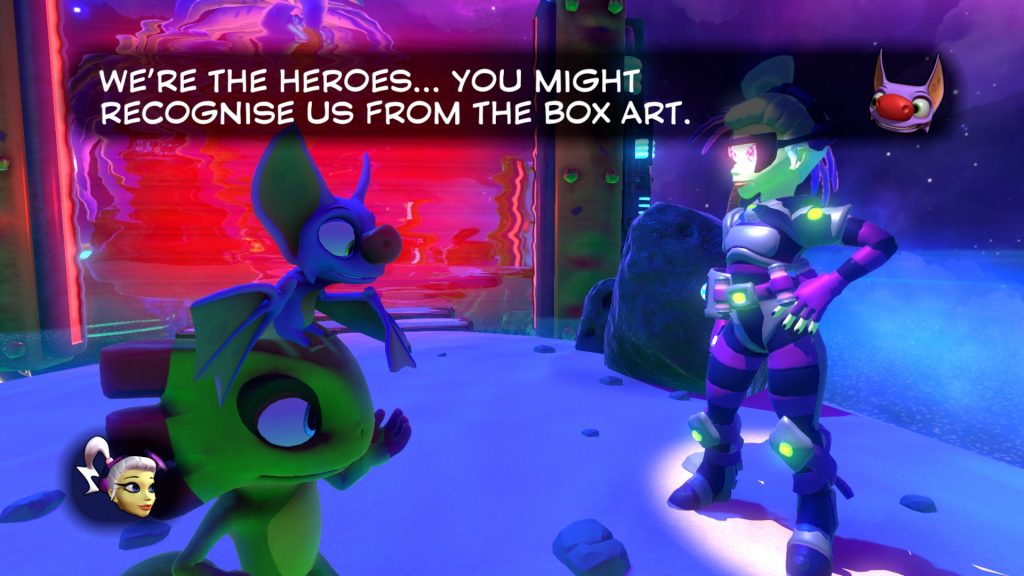 Despite the “voice acting,” the writing is self-aware and abundant with wit.

Reinventing the wheel that is the platformer genre after Mario Galaxy and NSMBWU have perfected it in both the 3D and 2D interpretations is an insurmountable task, yet Yooka-Laylee manages a competent attempt. With gameplay strongly resembling old-school Jak and Daxter before the dudebro redesign, Playtonic Games’ effort will have players spending hours searching for those last few quills (where are they, GOSH DARN IT!?!?). Those who participated in the kickstarter or are longing for a modern platformer without a plumber, gorilla, or ratchet will be pleased to know that Yooka-Laylee will satisfy until the last pagie is collected.

A review code for Yooka-Laylee was kindly provided by Team 17.

Yoooka-Laylee does little to revise the tried-and-true formula of the collect-a-thon, but instead, manages to revive the charm of the anthromorphic furry (or here, reptilian) of yesteryear in a game that should remind the industry that there is indeed demand for some old-fashioned and wholesome slapstick circumscribed by all-too familiar mechanics of running and (double)jumping.