Review: Yooka-Laylee and the Impossible Lair

Yooka Laylee and the Impossible Lair is the followup to 2017’s 3D platformer, Yooka-Laylee. This time though, British indie developer Playtonic Games follows up with a 2D platformer in the same vein as classic SNES games such as the Donkey Kong Country trilogy. Consisting of mostly former members of Rare, we shall see if they produced a project on par with the likes of Banjo Kazooie and Conker’s Bad Fur Day.

Playtonic Games is a British independent video game developer consisting mostly of former members from Rare. Rare, which was responsible for Nintendo classics such as the Donkey Kong series, Banjo Kazooie, Conkers Bad Fur Day, Perfect Dark, and many more. 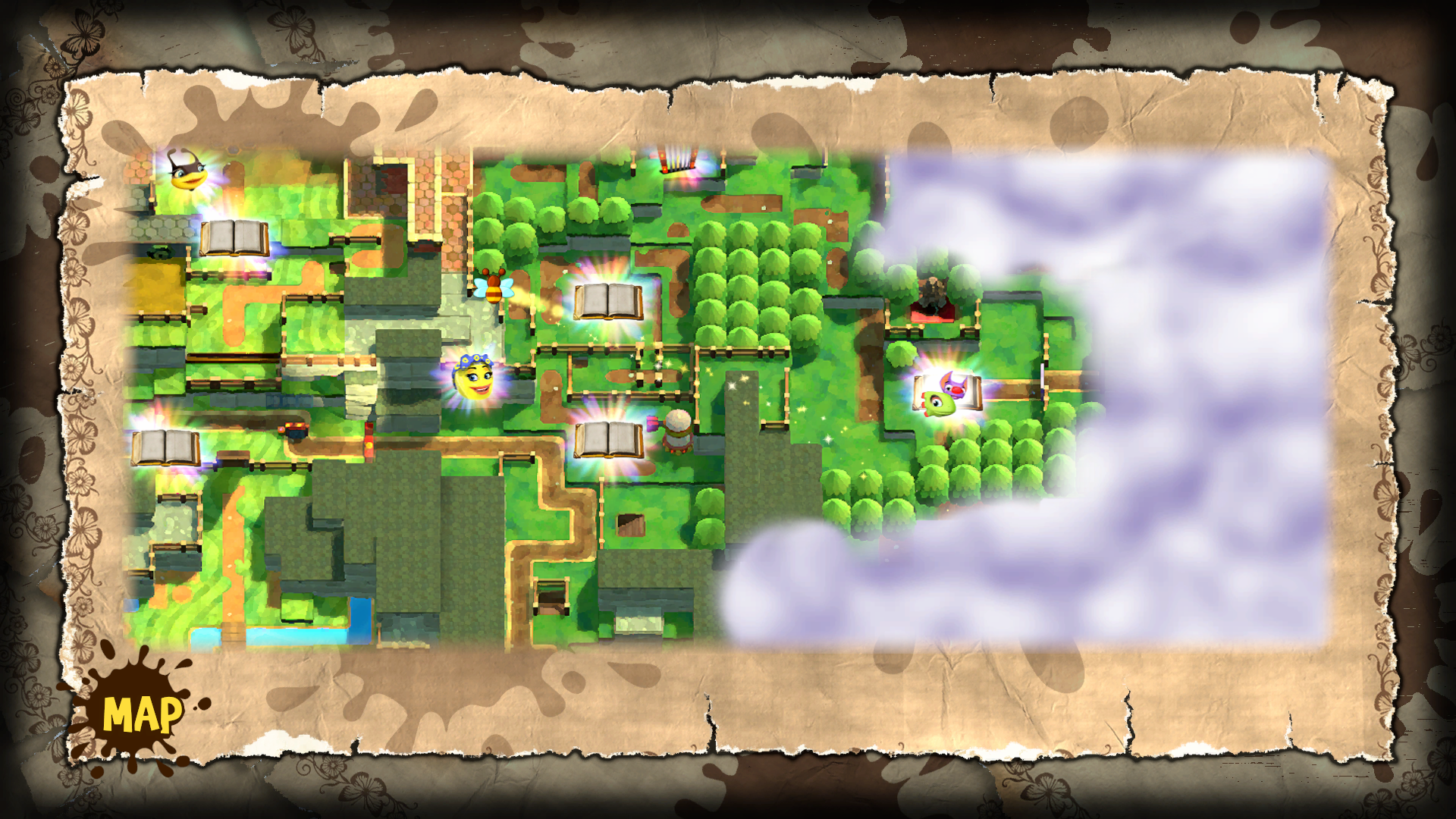 This is a super zoomed section of the map. It’s much larger than this.

Yooka Laylee and the Impossible Lair is a silly game, full of tongue-in-cheek jokes and references. Anything one could expect from the original 3D platformer can be ex[ected.  One character, named Trowser, happens to be a snake. You get the idea.

However, the game isn’t rife with inappropriate or gross humor, as Trowser is the only example that comes to mind of that nature. This is by no means a potty-mouth game.

Baddies will be jumped on, and Yooka or Laylee can be bumped into spikes or lava-hot areas that will force a restart of the area. It’s pretty harmless, but violence is present, even though it’s comical and very light and toned down. 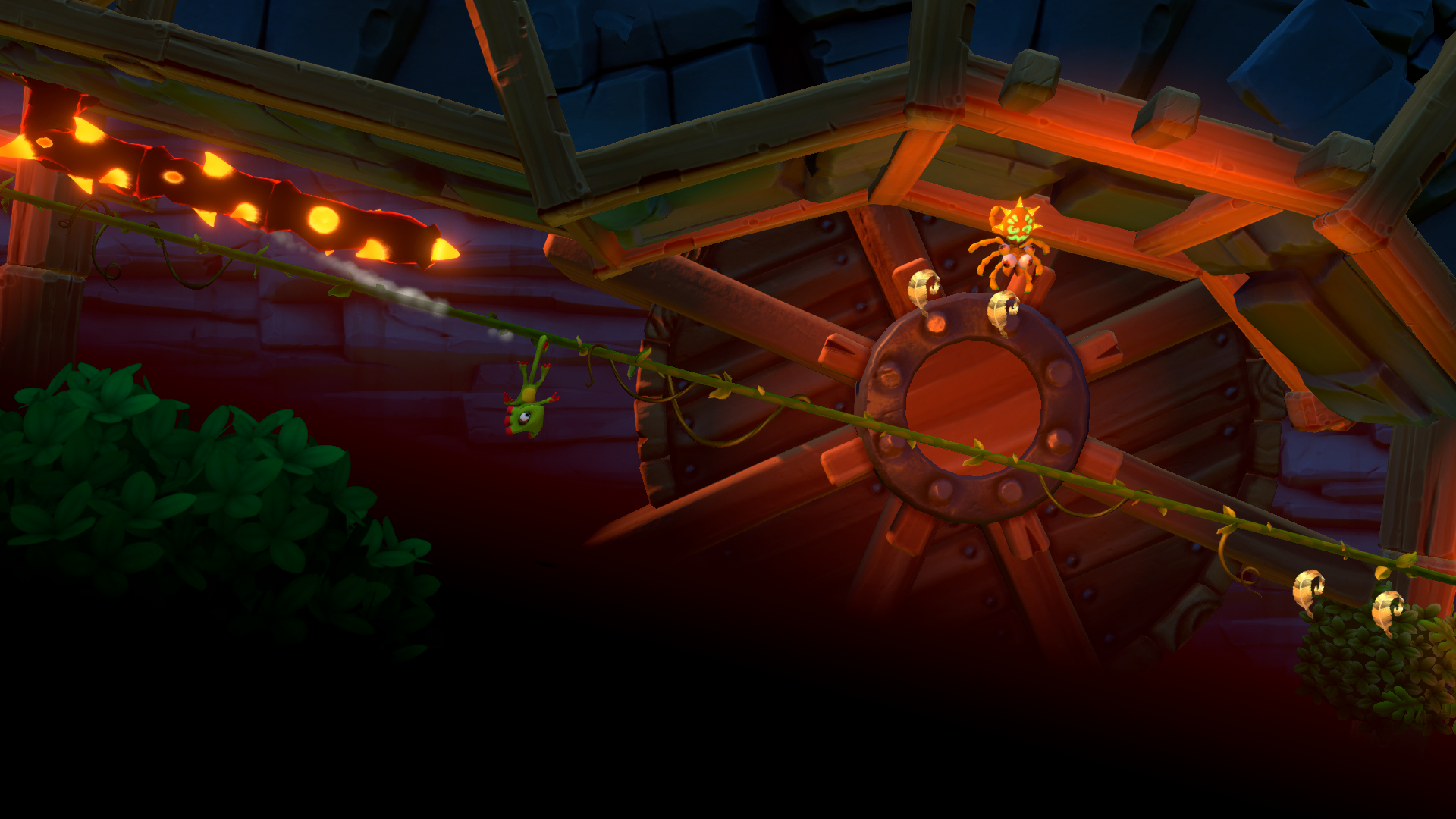 Pardon me while I slide.

Like many, I spent a lot of my childhood with platformers. My earliest gaming years saw tons of Super Mario Bros. and Donkey Kong Country on SNES. Later, I’d borrow a copy of Banjo Kazooie from a friend, only to never return it. I can also recall renting Banjo Tooie from Family Video many times in efforts to complete it.

These experiences catered my interest in eventually picking up Yooka-Laylee last year. As others have said before me, it was decent, but the developers’ pedigree didn’t quite match my hopes for a modernized classic 3D platformer.

Those dreams of yesteryear were crushed so much that I didn’t follow Impossible Lair. I actually thought it was DLC. 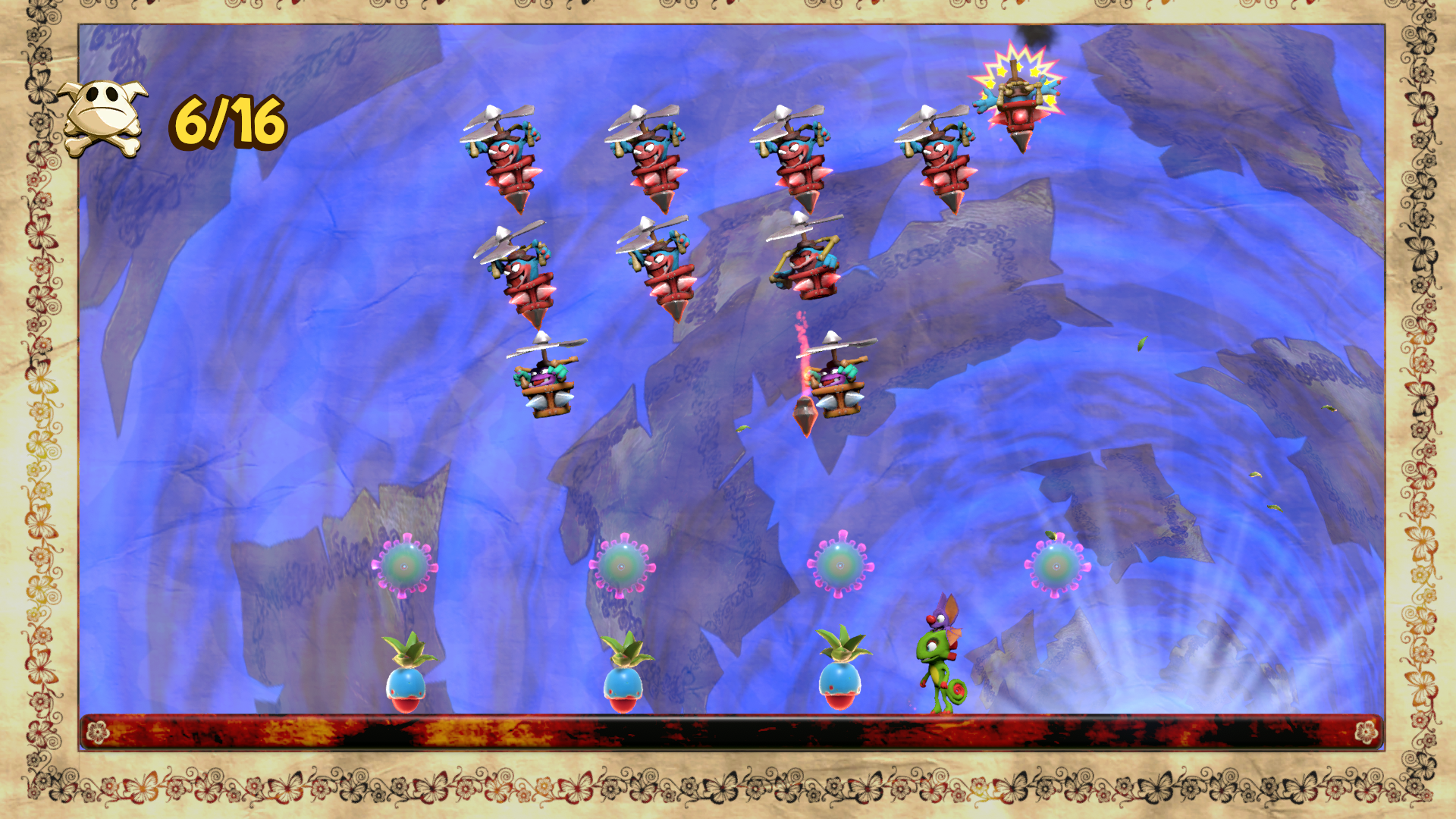 Yeah, there are Galaga sections too.

Let’s get the obvious stuff out of the way.

Yooka-Laylee and the Impossible Lair is a 2D/3D hybrid with puzzle solving and high-octane platforming adventures. You’ll navigate a vibrant top-down overworld with a touch of puzzle-solving, then hop into 2D platforming, filled to the brim with baddies and collectibles.

Playtonic’s overworld is a fresh take on getting a player from here to there. You’ll play through half of the game and grow curious as much of the map will still be hidden. Further, exploring the map is evocative of all the hours you might have spent wandering Gruntilda’s lair when you were young. Many characters to meet, each holding hints and goodies, all with the famous dialects and inflections of various grunts and groans and hums. 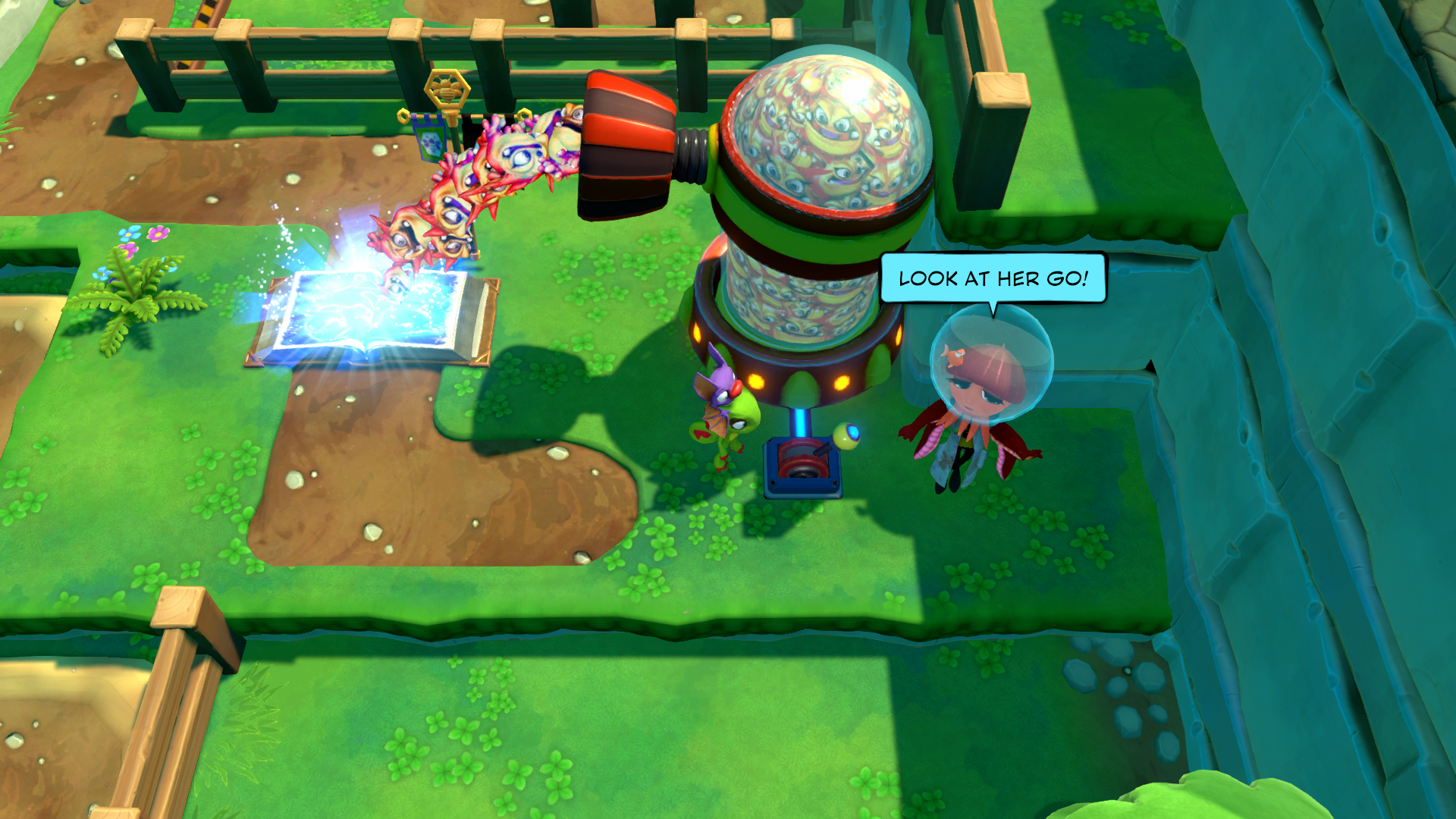 Dumping these guys into the level results in hundreds of baddies.

Lately, I’ve also been playing the recently released Link’s Awakening. Mechanically and through pacing, Link’s Awakening is clearly from a different, or simpler, era of game design. Impossible Lair is cut from similar same cloth. You might be granted a single clue from an NPC to proceed, or you might need to find a lever to pull somewhere to access the next area. In either case, you might wander the overworld in search of secrets, or just figuring out where to go next.

Progression in Impossible Lair is loosely tied to a number of things, but one significant way is through clearing levels.

At first glance, hopping into a 2D platforming level is no different than tapping the A-button on every other overworld map in gaming history. Imagine my surprise to see that in many instances, levels are more like the paintings in Super Mario 64. Adding water, ice, fire, or other elements to an environment will change up everything within the level. It may once have been a slow climb through webbed woods, but now it’s frozen over, where you’ll slip into brambles instead of jumping into them.

Speaking of slipping, the controls are pretty tight, but Yooka and Laylee are a bit slick. This isn’t a Super Mario World kind of halt and slide for 7 frames kind of thing, but slippery like Yooka wants to shift into a hedgehog ball and go fast. 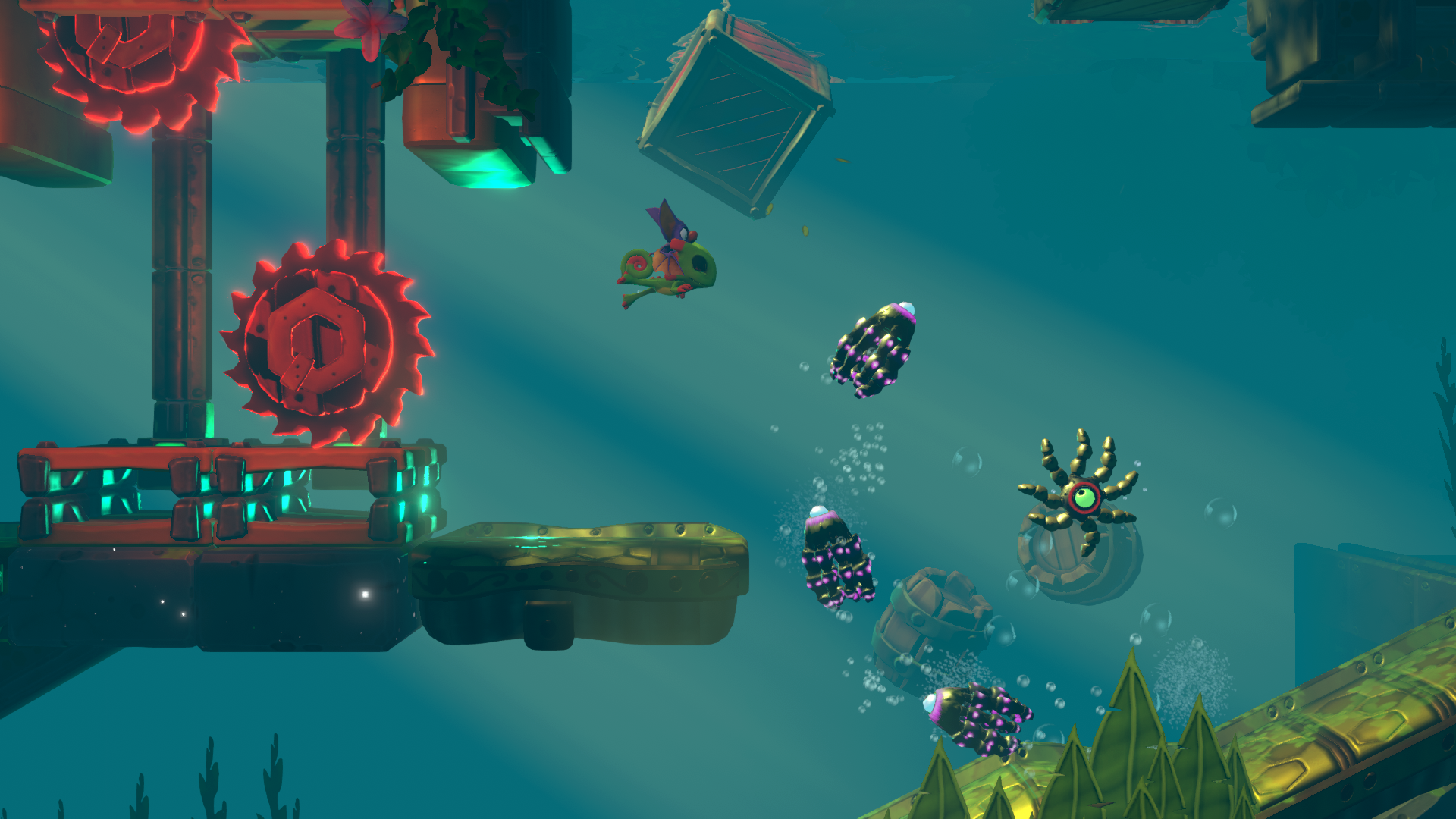 Look familiar? I felt like I was in Donkey Kong Country again.

The duo has a variety of moves, including a basic Sonic-style tuck and roll, a Diddy Kong-esque roll into jump, and a flutter, just barely like Kazooie. Oh, and Yooka can spit his tongue out like Yoshi to pull things closer to him. In fact, get bumped, and you’ll see Laylee flop around the screen like Baby Mario in Super Mario World: Yoshi’s Island.

Of all the moves, the tuck and roll is the least reliable, but I also found Yooka doesn’t get nearly enough air time on jumps. I’m used to getting a lot more of it, but I suspect it could be because I’m not tapping A at the right time.

Jumping and climbing bring back old platforming muscle memory, and level design does the same. These are unique and diverse, but don’t hesitate to bring back Donkey Kong Country tropes, such as barrels which shoot you to the next, or a bell that revives your fallen companion. Of course, you’ll also find many opportunities to uncover secrets and collectibles, some of which are needed to proceed further into the game’s overworld. 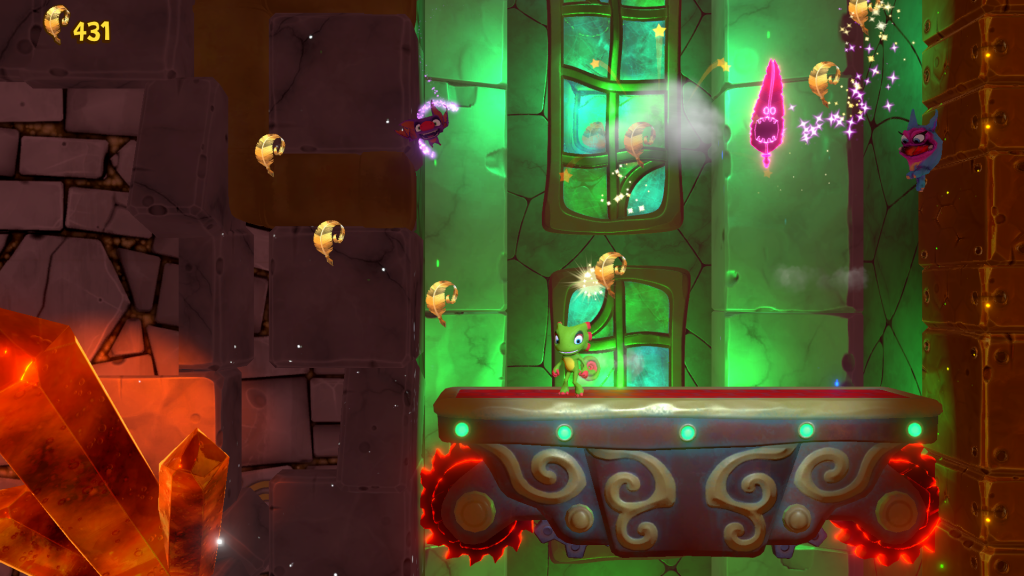 This area reminded me of an elevator in Mickey Mania.

Impossible Lair is a nostalgia trip, and I’m sure it’s intended to be.

While Impossible Lair lacks proper boss fights, it does allow you beat the game right from the start. The evil Capital B has constructed a large dungeon full of every trick in the book, and you can beat it, so long as you don’t get hit once.

This is the driving force of Impossible Lair. Each time you complete a level, you earn a bee which grants you one extra hit; extending your margin for error in the Impossible Lair. One might be tempted to hop back into the big bad’s creation every once in awhile. It’s highly challenging, requiring specific timing, and good knowledge of the game’s mechanics. This is a really good section of skill testing.

The game does a great job of continuing to test you and improve you as you play. You’ll constantly want to go back and run through a level again to find secrets. Or you’ll want to retry that nasty chase section, just to see if you can grab a coin before the laser rips you apart. 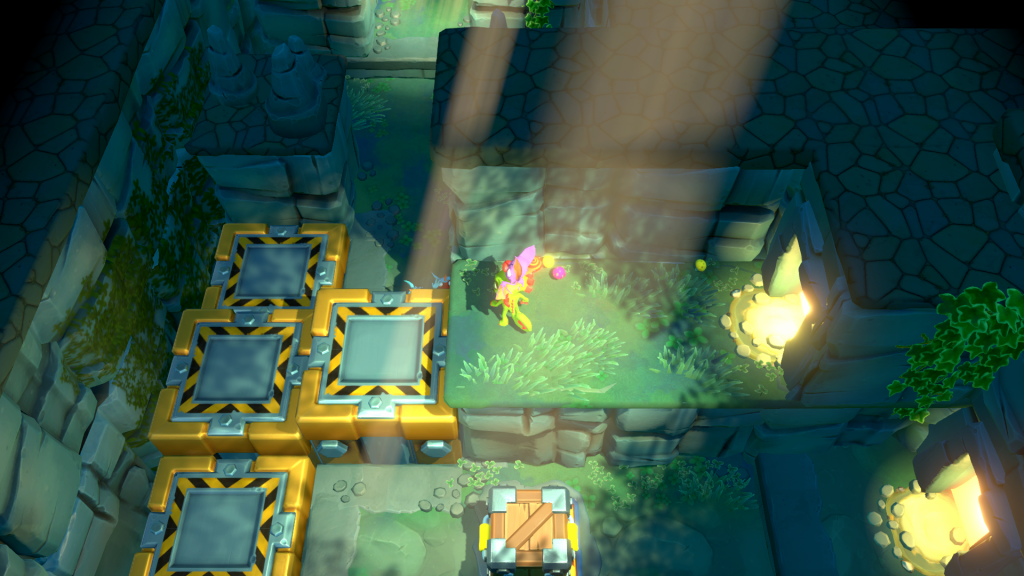 It’s safe to say Impossible Lair does almost everything right, which is a pity when you remember its predecessor didn’t manage nearly as well. It’s not a perfect game, but I constantly caught myself smiling like a buffoon, or getting excited to tell friends about what sections I’d just played through.

In the last five years or so, we’ve experienced a pleasing plethora of platformers with problematic puzzles and perplexing 2D and 3D planes, requiring patient planning and purposeful practice: Super Mario Odyssey, Hollow Knight, Cuphead, A Hat in Time, Wuppo, and Unravel, to name a few.

It’s these games and games like Impossible Lair that continue to give me lots of hope for the future of innovative platformers. I’m glad to add Impossible Lair to that list, but it makes me hope Playtonic Games can pursue a future full of more good stuff like this one.