The Merc with the Mouth. As any comic book fan will tell you, Deadpool is very unique. He is fully aware that he is a comic book character, taking time to address his audience mid-story. He’s quirky, funny, and all-around inappropriate for the most part. 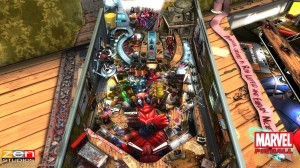 So why not make a pinball table for him?

Zen Studios is known for their amazing tables related to some pretty famous characters.  They have an entire line of Star Wars pinball tables–Darth Vader, Boba Fett, and The Clone Wars to name a few.  They also have some pretty amazing Marvel tables, Deadpool being one of those.

Nolan North voices Deadpool, as he did in the Deadpool video game, and his delivery of the snarky anti-hero’s dialogue is bar-none. Those familiar with video games will have, at one point, heard his voice, as his resume is chock-full of video game voice-overs.

The table is unique to Deadpool, including a pinball table inside the pinball table (which he even comments on).  Deadpool ignites T.N.T 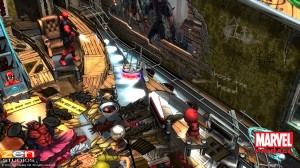 to launch the ball in a fun and crafty way, and his endless commentary will keep you laughing (if not distracted in a fun way). He will even mention previous Zen Studios games in jest.

When you approach the bonus levels within the game, you are able to choose from a few “issues” in which Deadpool has to complete a challenge. One of my favorite is when minion Deadpool comes out and starts firing a rocket launcher at Deadpool. You have to hit the ball in the lighted lanes to keep this from happening.

If you are a fan of Deadpool, or pinball, you will enjoy this download.

Zen Pinball 2 introduces a Deadpool table and it's just as fun as you would guess.