The Venom Table for Zen Pinball 2 is an exciting new addition. I played the original Zen Pinball when it came out for Playstation 3. It’s a load of fun, and if you’re a Marvel fan and enjoy Spiderman, you’ll love this pinball table and Zen Pinball 2.

Zen Pinball 2: Venom Table is rated E for everyone. The rating notes Fantasy Violence and Suggestive Themes as potential concerns. There is no alcohol use, sexual themes, or language. There is minor cartoon violence/fighting. After having played it, I’d say it’s okay for kids to play this game.

The goal of the game is to team up with Venom in order to take down Carnage. It is a long process to get to fight him; you have to put the pinball in the exact right area, repeatedly. It might take quite a long time. In order to face Carnage, you must spell out CARNAGE by hitting the pinball to the correct area. With each correct hit you gain a letter, spelling out Carnage, ultimately letting him out of his cage. Unfortunately, it’s pretty frustrating to try to get to this phase. I tried multiple times and still failed to get Carnage out onto the board.

You also can get Spiderman into his black suit by hitting the “Suit” blocks. The blocks will go down as you hit the letters.

There’s lots of opportunities for chaos in this pinball game. Like when you get three, and then four, balls bouncing around the board. After you get the three balls to their designated spot, Black Spiderman crawls into the pit. He takes the balls out—making it a multi-ball game. Now you have four balls at the same time. With four it’s pretty uncontrollable. It’s easy to lose track of the balls going through bumpers, bouncing around everywhere. On the plus side, it boosts your score pretty quickly, so there is definitely a pay off.

You can choose up to eight different table views. I checked out a few which followed the ball, but I’m not a big fan of them. It’s easier to play the game while viewing the whole table, with little camera movement. If you’re following the ball it’s pretty easy to mess up.

One downside of to trying to take down Carnage—the pinball goes out a lot of times (Carnage likes to throw things). This might frustrate players if they’re on a scoring spree. Once the ball goes out, you have to start over.

Occasionally when I played, I would experience lag spikes during gameplay. It’s pretty frustrating in a pinball game, where timing is key. You might get a delayed reaction when trying to hit the pinball off the bumpers. The lag really messes with the rhythm. 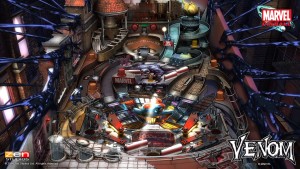 All Venom table screenshots shown are provided by Zen Studios

The soundtrack for this game is pretty solid. It keeps you pumped up to continue playing the game. It’s pretty catchy too (you might even find yourself dancing to it).

The graphics are more polished than in previous iterations. This version for Playstation 4 runs on 1080p resolution at 60 FPS. The table’s colors are vibrant reds and blues, adding to the excitement. 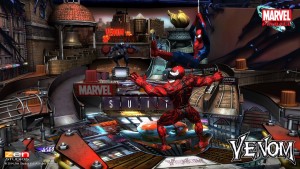 All Venom table screenshots shown are provided by Zen Studios

I think most Marvel fans would love this pinball table game. Not only do we get Spiderman and Venom, but Carnage is a great villain. While it may take some time to actually beat Carnage, it’s worth the challenge to play through.

Zen Pinball 2 is free in the Playstation Store.

Venom Table is $4.99 in the Playstation Store, and is available on the PS4, PS3, and PS Vita platforms.

Have you played the Venom Table for Zen Pinball 2? What did you think? Let us know in the comments below!

You'll have fun with this game despite the somewhat tedious effort of trying to defeat Carnage.