While I’ve played well over a hundred JRPGs in my life, you never forget your first loves, which were all on the Super Nintendo. Final Fantasy IV and VI, Secret of Mana, Chrono Trigger, and their ilk devoured much of my childhood. So, any indie RPG with that aesthetic — especially one that promises to marry those RPGs to Legend of Zelda gameplay — has my attention. CrossCode makes ambitious promises; does it deliver?

A brief note: I completed very few sidequests, so this is primarily about the main story. Also, I do my best to be vague, but there will be spoilers. 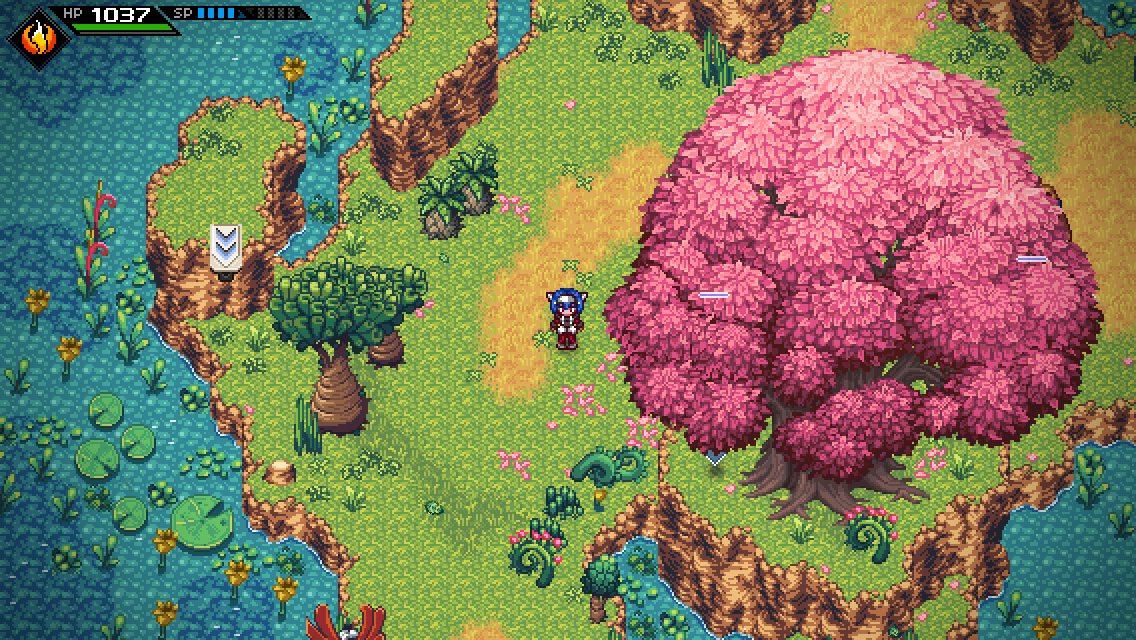 This gives me Secret of Mana vibes. Except CrossCode is far superior.

Violence: The story of the game takes place inside a (made-up) massively multiplayer online game (MMO), and all of the fighting is against digitized monsters or animals. A few bosses are against avatars of other players of the MMO. However, we do see a few characters in reality outside of the game and one character commits suicide in reality.

Sexuality: I do not remember any of the sort, even innuendos. Quite a fuss is made over an unexpected hug.

Language: I do not remember any extreme swears; but I believe there were a few h-lls and d-mns. (According to ESRB, there is at least one sh–t.)

Spirituality: The game explores the ethical implications of AI, and to an extent, cloning. However, the game does not come down hard on any particular stance on either subject.

Diversity: Overall, CrossCode includes a very diverse cast. Several of the key NPCs are Asian and African-American, and the playable party includes characters from various countries. However, a later area of the game which is clearly Oriental themed includes a family of NPCs, the Ling family, whose names are English puns: Dar Ling, Hau Ling, Pi Ling, and so on. Furthermore, the single black character ends up playing into a typical blacks-in-cinema trope.

CrossCode received a T (Teen) rating from the ESRB. 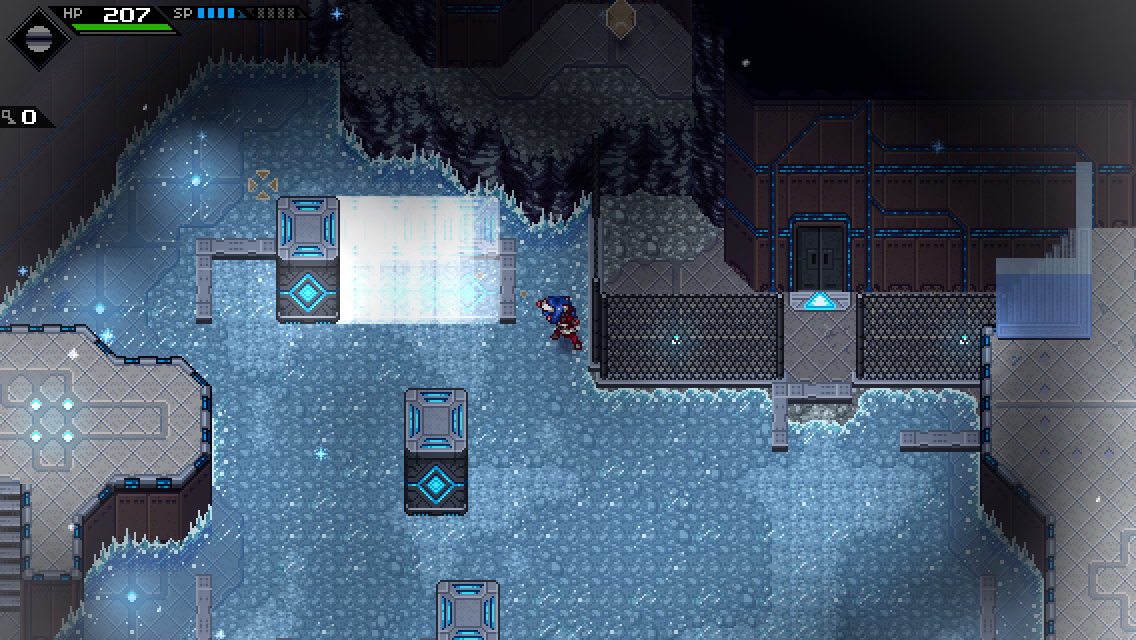 One of the many, many, MANY puzzle rooms in CrossCode.

(You are safe from spoilers now.)

A Game Inside a Game

The basic premise of CrossCode is that your character, Lea, is playing a MMO called CrossWorlds. She has amnesia, but is hoping to regain some of her memory from playing the game as she did before. Also, her in-game speech module is broken, although she can understand other players.

This premise is not entirely original, but works brilliantly here. The setting of CrossWorlds allows the writers to tell a “real world” story but still have the typical gamut of RPG baddies, leveling, stat upgrades, and everything else. It also justifies the extensive puzzle-dungeoning throughout the game. Meanwhile, Lea’s speech malfunction (she eventually learns to say just a few words) is a fantastic twist on the silent protagonist trope, and plays into some of the game’s best emotional moments. 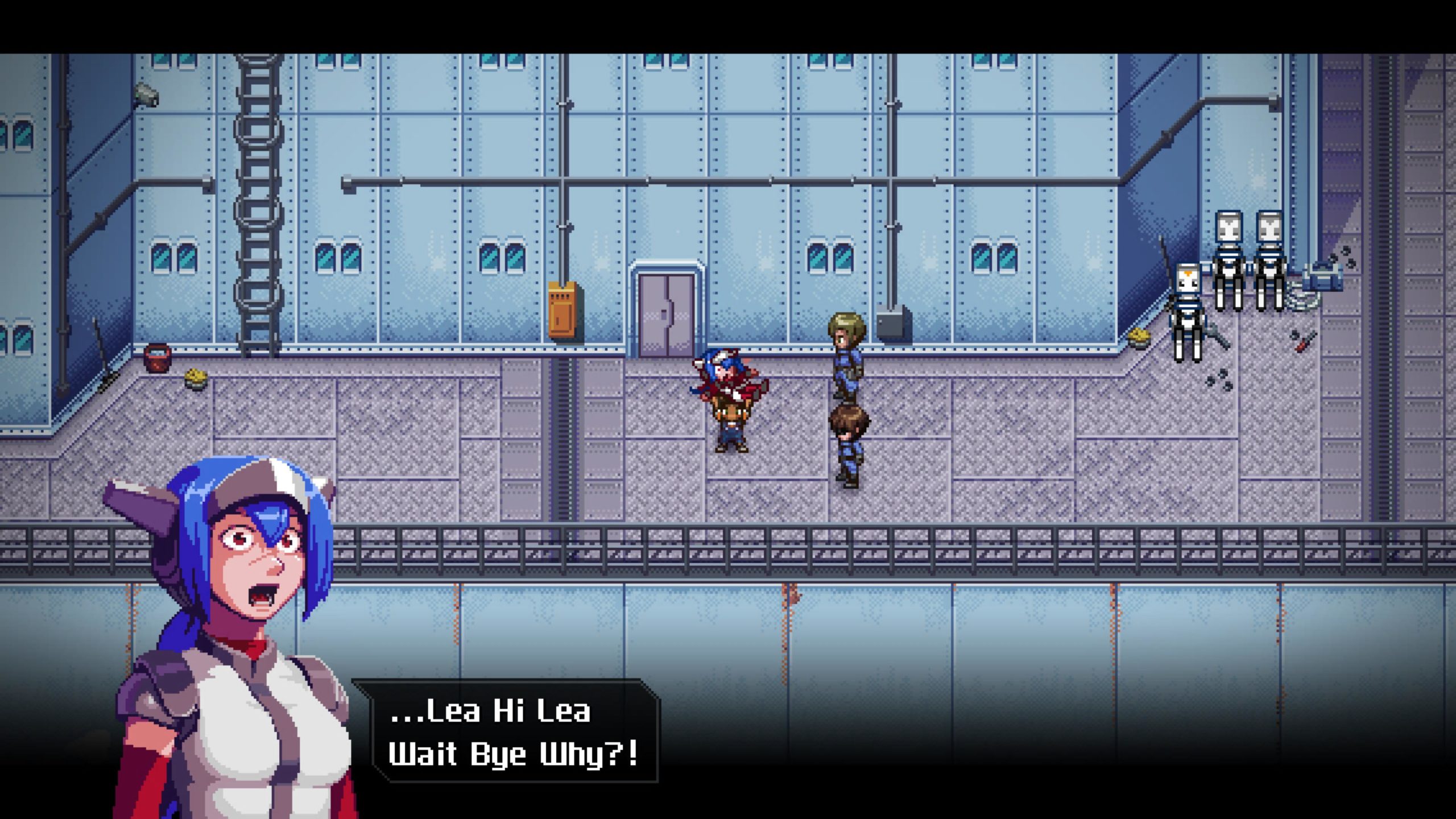 Lea’s class within CrossWorlds is a Spheromancer, which means she’s able to shoot orbs of energy at enemies, as well as puzzles. There are six large dungeons in the game, and every room is either a brief encounter with enemies, or a puzzle for you to solve. And I mean every single room.

I find the puzzles to be a refreshing change of pace, requiring geometric intuition in addition to the standard logical thinking. However, the dungeons are long; I remember thinking I had finally beaten the second dungeon, only to discover that I had beaten the “mini-boss” and we were only halfway done. Later, three of the dungeons are back-to-back-to-back, which gave me serious puzzle fatigue. I never felt that I couldn’t do the puzzles (what other game is a Ph.D in mathematics good for, if not this one?), but occasionally I found myself looking up solutions simply to get the dungeon wrapped up. It’s also very easy to have the right solution without exactly the right angle, which can be frustrating.

Pretty Sure I Just Suck at This Game

For all my confidence in puzzles, I was terrible at combat. I played the game on the easiest difficulty, and still struggled with several boss fights. I found the controls strange, and the menu options to rearrange them somewhat limited. I found it very difficult to aim while also dodging and moving around to avoid enemies. Some kind of target lock system would have made the game considerably easier, and could have reduced some headache in puzzles as well. I also wonder if the game is simply meant for a keyboard and mouse, and suffers on consoles. But then I see youtube videos of players beating bosses on hard without getting hit, and I wonder if it’s just me.

Despite my ineptitude at combat, I was very happy with the way CrossCode laid out its encounters. Enemies are everywhere in the overworld of CrossWorlds, but they leave you completely alone unless you voluntarily engage with them to level up. There is also a grade system that encourages you to fight lots of enemies at once for bigger bonuses, which keeps overworld combat from being a boring grind. In dungeons, puzzle rooms never have enemies, allowing you to concentrate on the sometimes challenging puzzles. Of course, some boss and mini-boss encounters have a puzzle element to them, much like Zelda enemies. I appreciated the chance to focus on puzzles, and to grind on my own time, otherwise free to explore without worrying about random encounters.

I’ve always felt like the main draw of an RPGs is the narrative, not the combat or even the exploration (though there is plenty to explore in CrossCode if you are a sidequester). CrossCode’s narrative is absolutely excellent, and that cannot be understated. So many RPGs fall into the trope of “the world is going to be eaten by a demon dragon and only we can save it!!”, while adventure games with a focus on puzzling often have a placeholder narrative without any emotional impact. CrossCode tells a focused, deep, reasonable story full of interesting revelations. While it’s clearly science fiction, it’s also not that far removed from our current reality, and asks deep questions about ethics of computing, and how to escape a life of sin.

Not only is the story good, but the characterization is incredible as well. Making a (mostly) silent protagonist work so well is no small task, and the characters around her are genuinely interesting and likable. Even the “throwaway” NPCs have little recurring stories.

If I had a complaint about the narrative, it’s that the dungeons and their bosses aren’t really connected at all, but simply there as part of the in-game MMO, CrossWorlds. I’m not sure I have a good alternative, but it feels at times like Final Fantasy and Zelda were glued together, instead of woven together.

Even if I’m terrible at it, by no means did I have a terrible time playing CrossCode. The world they’ve created is gorgeous, and the audio is strong, particularly the sound effects. There is a ton of optional content for players that want to keep going. The puzzles were fascinating, even if excessive. But most importantly to me, the top-notch narrative kept me glued to my seat until the very end.