The most fun you can have looking at a map.

Ah, do you smell it? Is it the glorious smell of Francia? No, my friend, that is the smell of my birthright! Francia shall soon prosper under their new leader, Emperor Sebastian-Francois Ponce de Cuiseaux, now that all the other kings have died under “suspicious circumstances.” Yes, I feel this is only the beginning of an incredible dynasty, if I play my hand correctly and not meet the fate of those—unfortunate—before me. 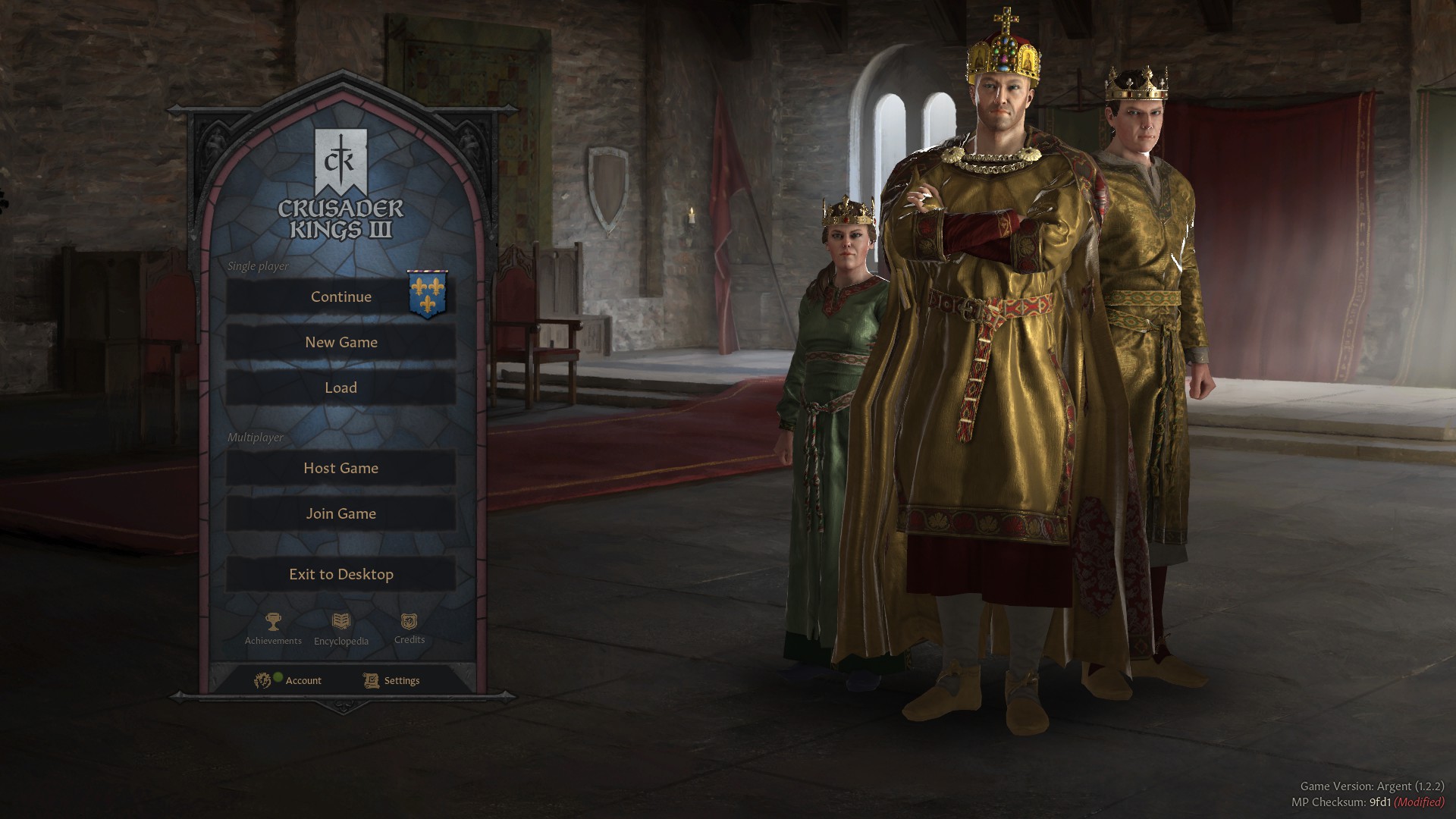 The Empire of Francia has never looked so fine.

*** I must note first that most of this stuff is never acted out in front of you. The Crusader Kings series is heavily reliant upon story text and told events. No cutscenes depict these things.

Drugs/Alcohol: References to alcohol in certain events, and drunkenness.

Sexual Content: Any character can be straight, gay, bisexual or asexual. These traits are completely random.

There are also traits or tenets in this game that can cause characters to become nudists. I haven’t experienced this in any of my time with the game, but upon conducting some outside research, I believe that the women can appear topless, and males are covered with leaves.

There are also references to adultery and people cheating on each other, and you can take women as concubines.

Positive Content: You can go on pilgrimages and walks of faith to show your character’s devotion to God. 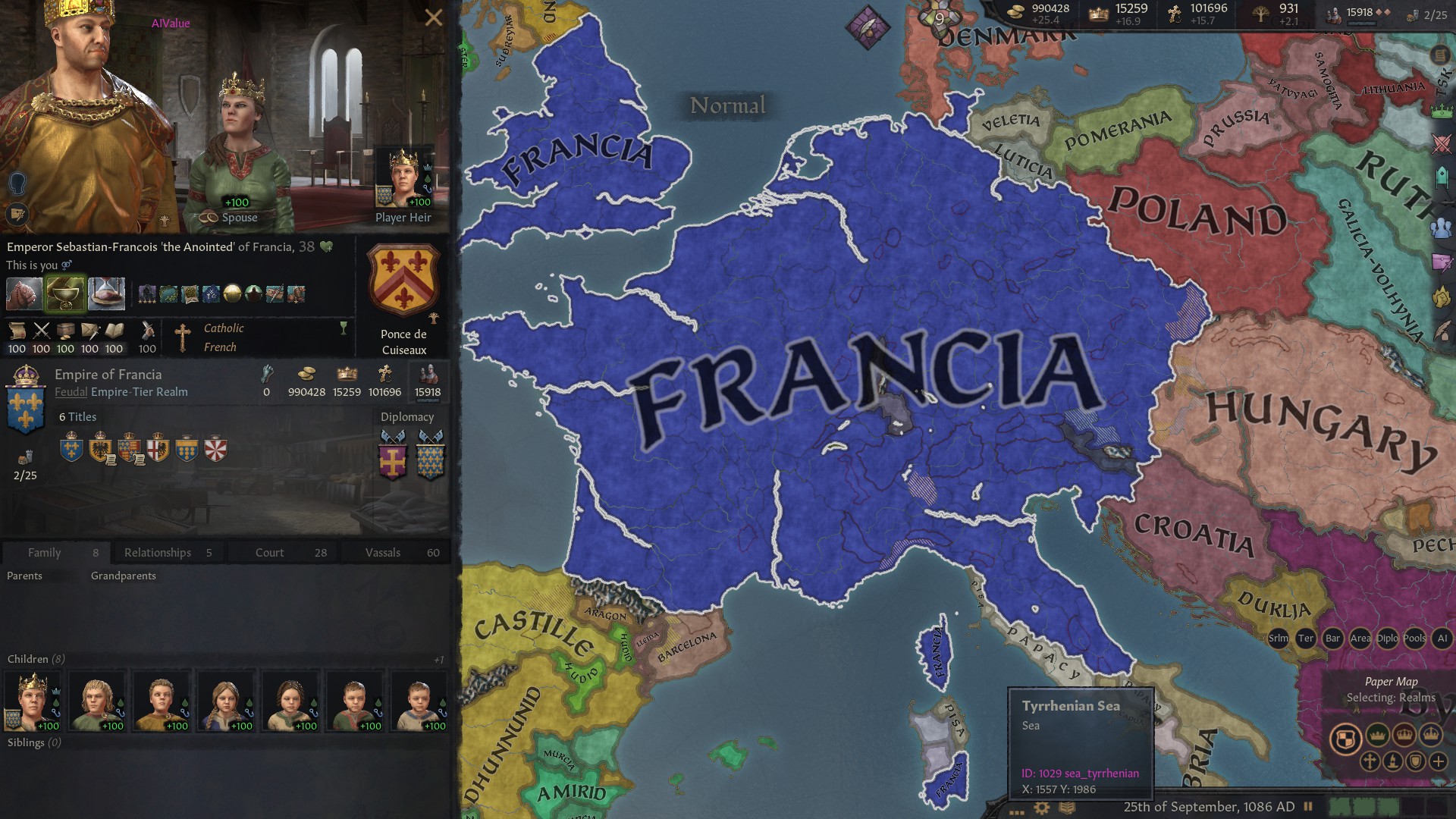 This is what you’ll be staring at most of the time. I know this map now like the back of my hand. Wait a minute, I don’t recall that scar there?

The Crusader Kings series is unlike any other. In these games, you are not playing as a single nation, but rather a dynasty. Your character can start as a leader of a nation, or you can start lower on the hierarchy and work your way up through either favor or deceit. All of these situations can face a variety of variables, such as a nation’s succession laws, religion, and allegiances. I must warn you to be cautious, though; earn or keep your rightful place through wit or war, but always look behind you.

Crusader Kings III plays much like its predecessors but with a significantly better engine and layout. The game is played mainly through a map and depends heavily on the lore and event pop-ups happening throughout time. These events can affect your dynasty in numerous ways depending on the choices you make and the characters you interact with.

When you begin a new game, you may pick any of the nations available and take the reigns of famous historical figures like Charles the Bald or Alfred the Great. You can also create your own custom dynasty with the ruler designer, which was released as a free update (unlike in CK II where it was paid DLC).

Once you have your nation picked and character at the ready, it is time to rule! To develop your character, you can choose from a variety of different lifestyles, and whichever one you select will impact how you run your kingdom.

Diplomacy: Affects your influence and how well you rule with your voice.

Martial: Centers on your army, making your nation powerful and intimidating by increasing dread.

Intrigue: Plotting with cunning and wit!

Learning: Gaining all the knowledge you can and increasing your realm’s culture and theology. 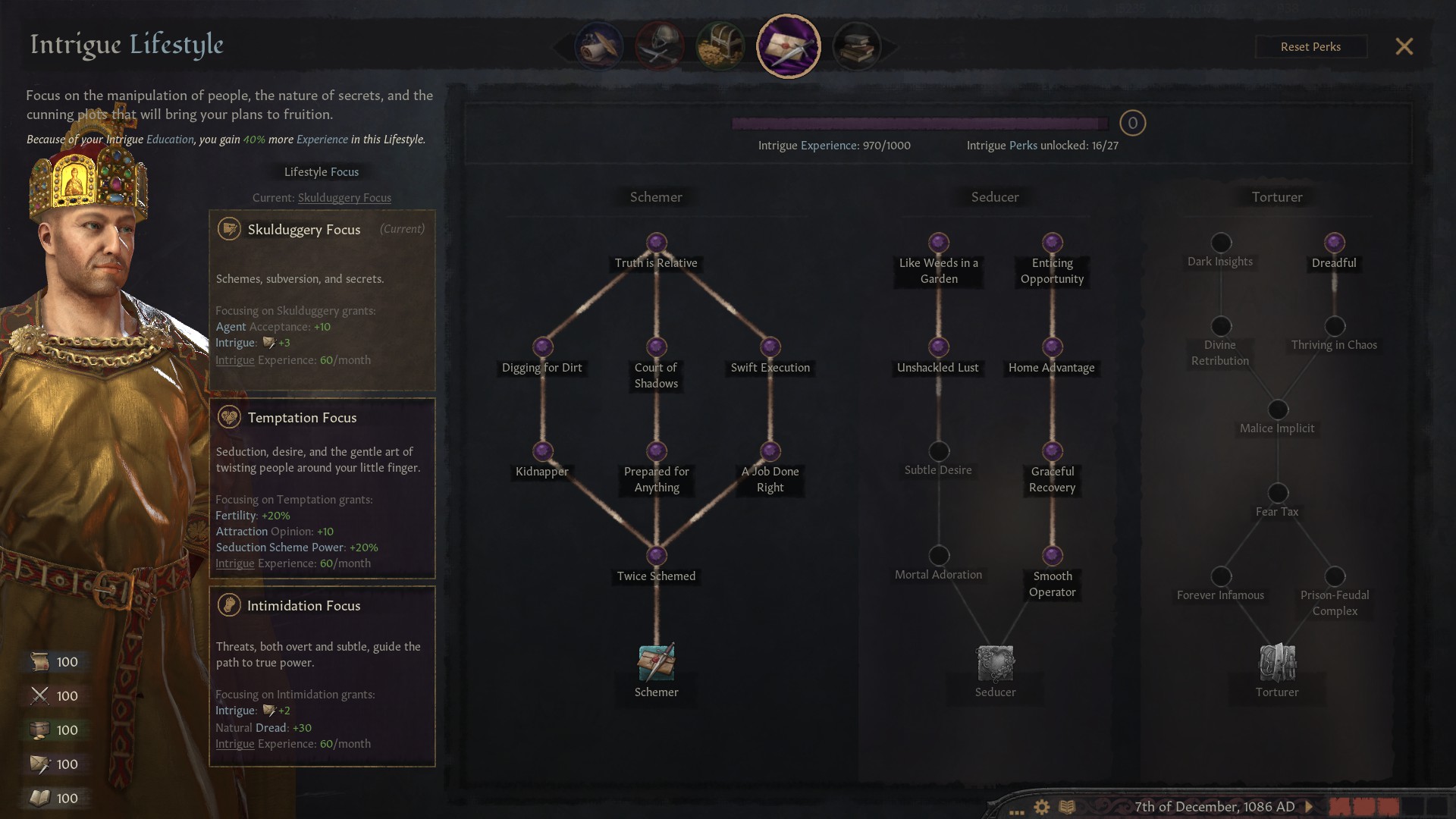 Yes, I find this lifestyle to be quite, intriguing. *shakes wine glass*

As an “intrigue” player, I became a huge fan of a newly-introduced element of gameplay for CKIII called the “hook” system. Certain character interactions and choices you make can gain you a weak or strong hook on them which you can later use to force NPCs to see things your way. This new mechanic adds extra leverage for blackmailing, voting for successors, gaining followers to any plots, and all sorts of other favors.

You will manage your dynasty mostly through the sidebar, which has tabs for the following:

Realm: The domains you have control over

Council: Elect people to your council to assign various tasks around your realm, such as training military, collecting taxes, or fabricating claims on other domains 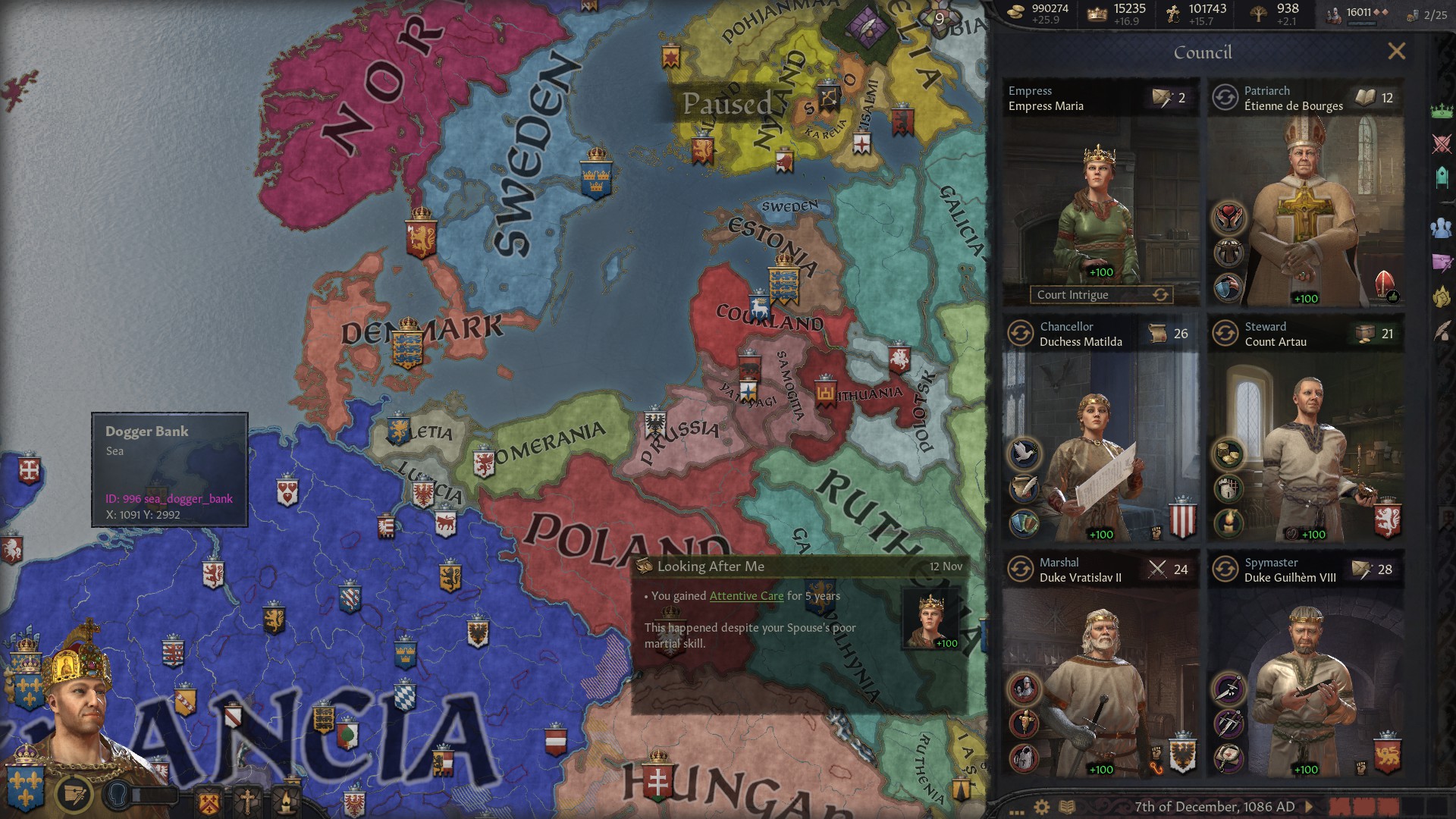 Ah, the important but not-as-important-as-me people of my realm! And how they love me <3

Court: View your vassals and other notables staying in your court

Intrigue: View your plots and discovered plots against you, as well as the hooks that you and other rulers hold on one another

Factions: View the status of factions plotting an uprising

Decisions: Make important decisions here, such as going on a pilgrimage, holding a feast, or conquering Ireland 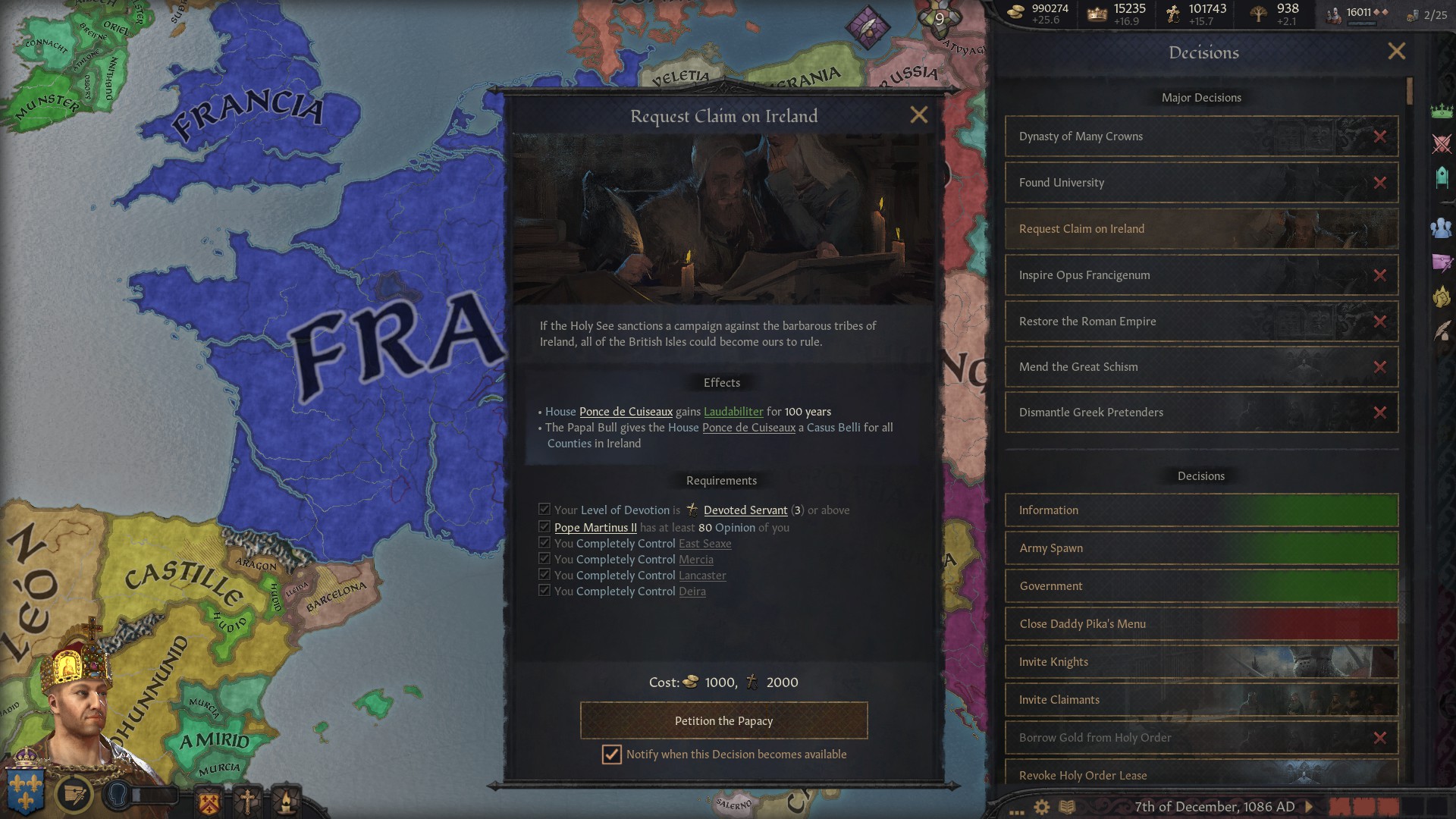 Now we’ll have the market on wine AND beer.

Pop-up events also happen during the game and how you interact with them determines how your story unfolds. These events vary depending on what kind of leader you are. Most choices you make will either raise or decrease people’s opinions of you. Vassals with a lower opinion of you will not side with you in plots, they will give you little-to-no additional army levies, and they may also form factions against you!

Other choices you make may depend on the amount of the game’s three types of currencies you have to spend. These currencies include:

Prestige: These points you gain from how well you rule

Piety: How you respond to events or other situations involving religion or religious heads.

Accruing plenty of all three is the key to success, because some choices require a combination of these currencies.

(ignore the amounts I have, I cheated in this particular save to get a feel for the game before playing it for real — and because it was fun, so what?). 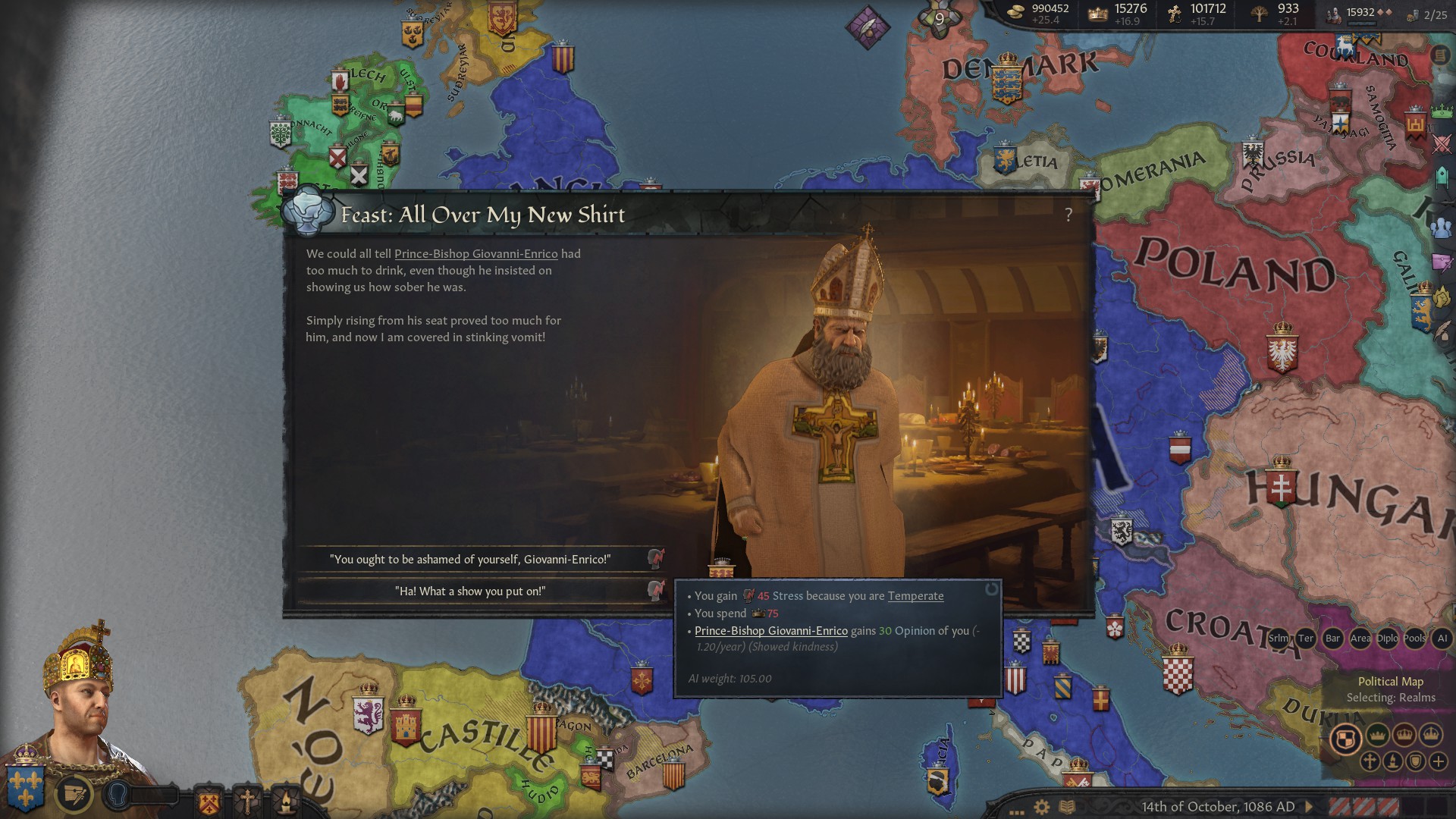 Does this all sound complicated to you? Well fear not, because the game ensures that you do not feel lost. Numerous shortcut buttons pop up at important times to guide you along the way. For example, if another nation decides to go to war with you, you do not have to navigate to the military tab to raise your army; a button will pop up for you to click.

There are loads of other game mechanics I haven’t touched on, which you can learn and discover for yourself! So make your decisions, forge your alliances and become the great ruler you were destined to be! Just make sure you make time to breed an heir, for if you die without one, it is game over—and in a world full of deceit and power-hungry nobles, the next day is never a guarantee.

On the surface, Crusader Kings seems like a simple game where you stare at a map waiting for things to happen, but that couldn’t be more wrong. Some of the stories I could tell you about my past dynasties (all hail King Akke the Pious!)  that happened throughout numerous hours of the series as a whole are amazing. The game is packed with lore, twists, and turns, and you have no idea how any of your choices will affect you later. There are things going on in the game around you that you don’t even know are happening! This isn’t a simple map, no—this is a living, breathing world. This game is ALIVE. 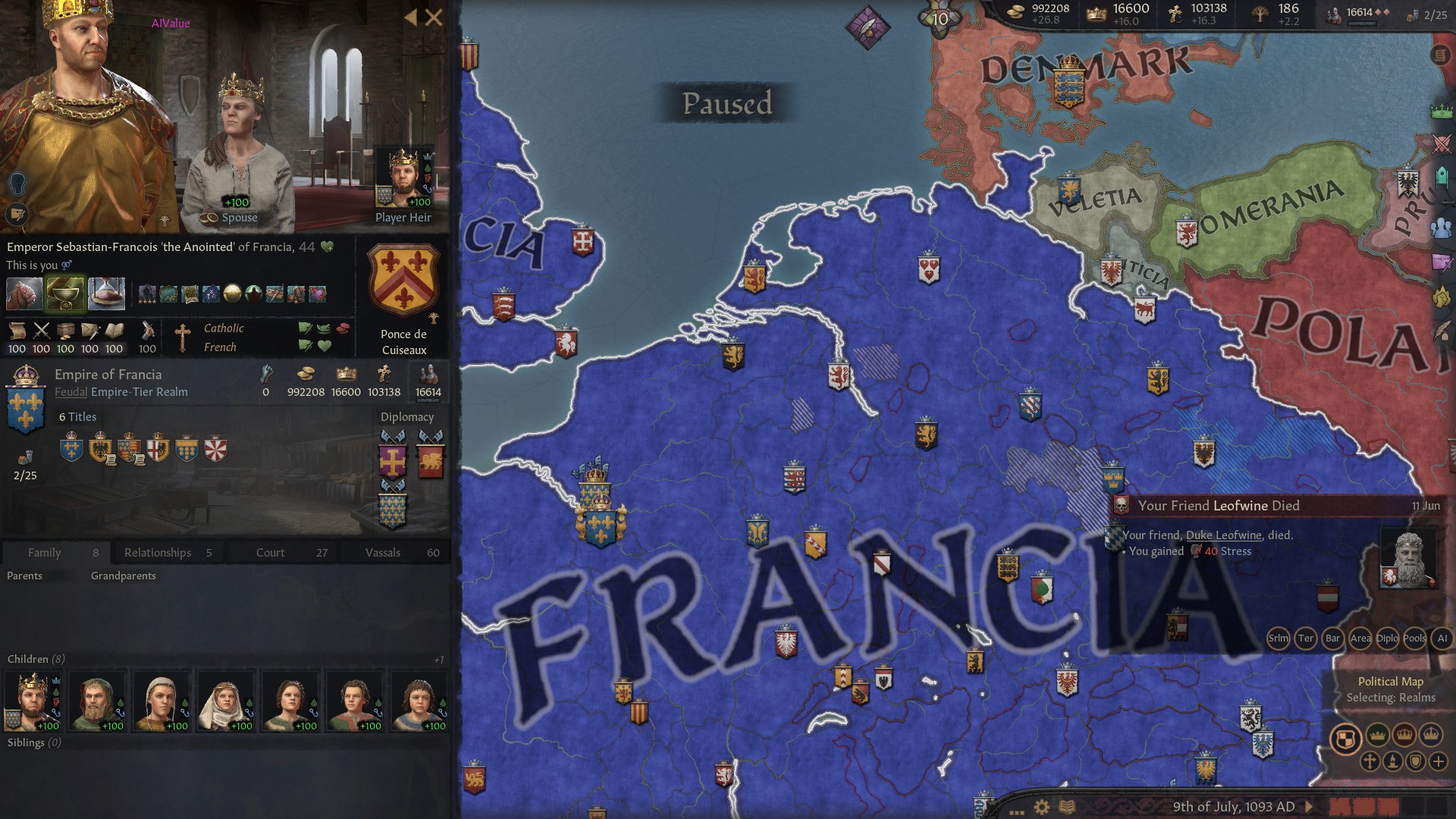 Crusader Kings III is offers a full-fledged grand strategy experience with tons of content, and gamers will be telling the compelling stories of their dynasties for years to come.